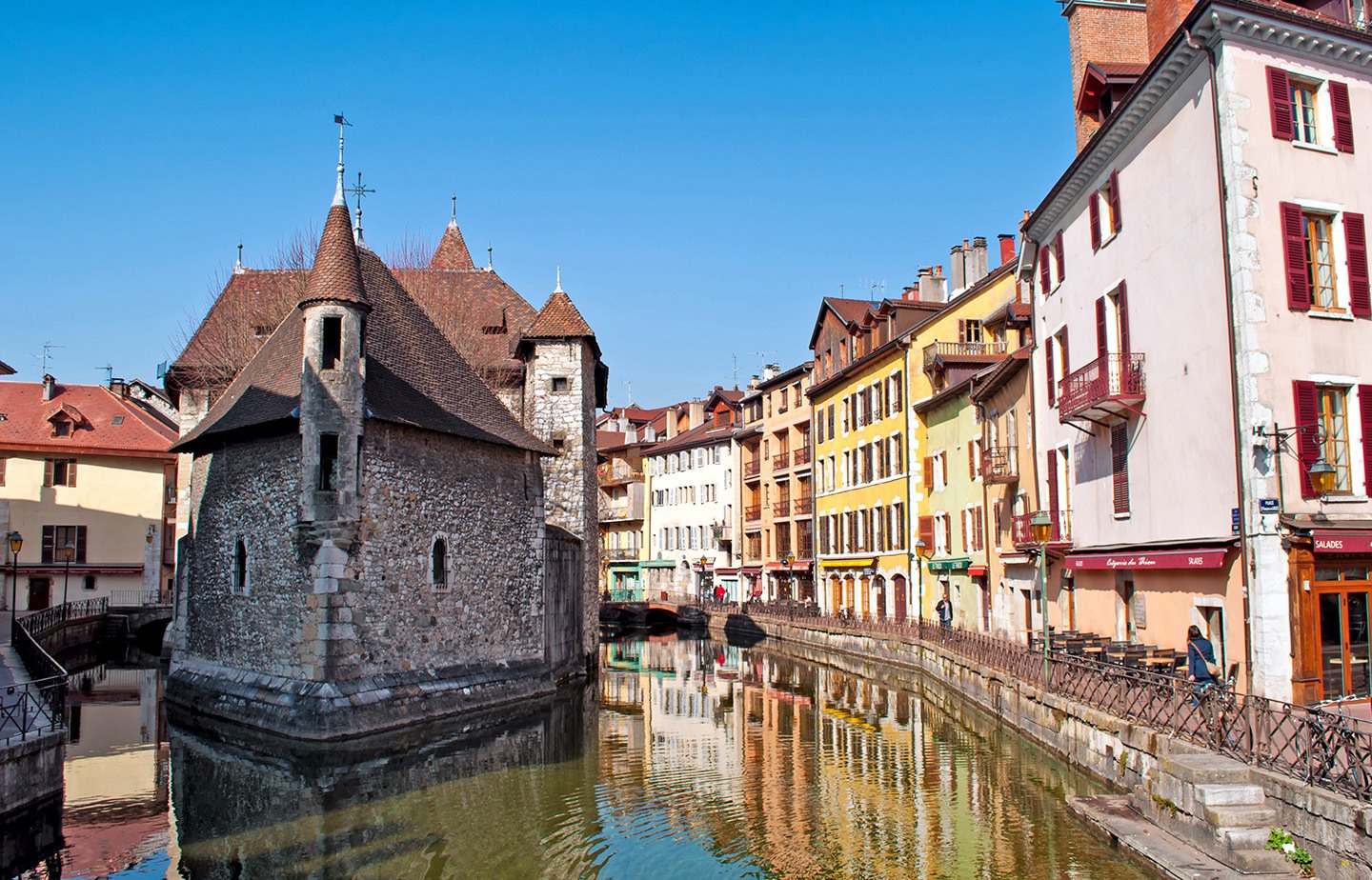 Less than a year after deciding Strasbourg was my new favourite French spot, I’ve already lost my heart to Annecy. It must be something about the canals as both places are set around a network of waterways. But as well as a perfectly preserved old town with gorgeous historic buildings and cafés, Annecy also throws in a turquoise lake and stunning mountain scenery.

It’s not somewhere with a lot of famous sights, but rather somewhere perfect for a bit of aimless wandering, eating and drinking. The town’s compact size means you can easily spend a few hours exploring and then relax for the afternoon on the lakeside beach or in one of the waterside restaurants. So here are some of my favourite things to do in Annecy.

The best things to do in Annecy 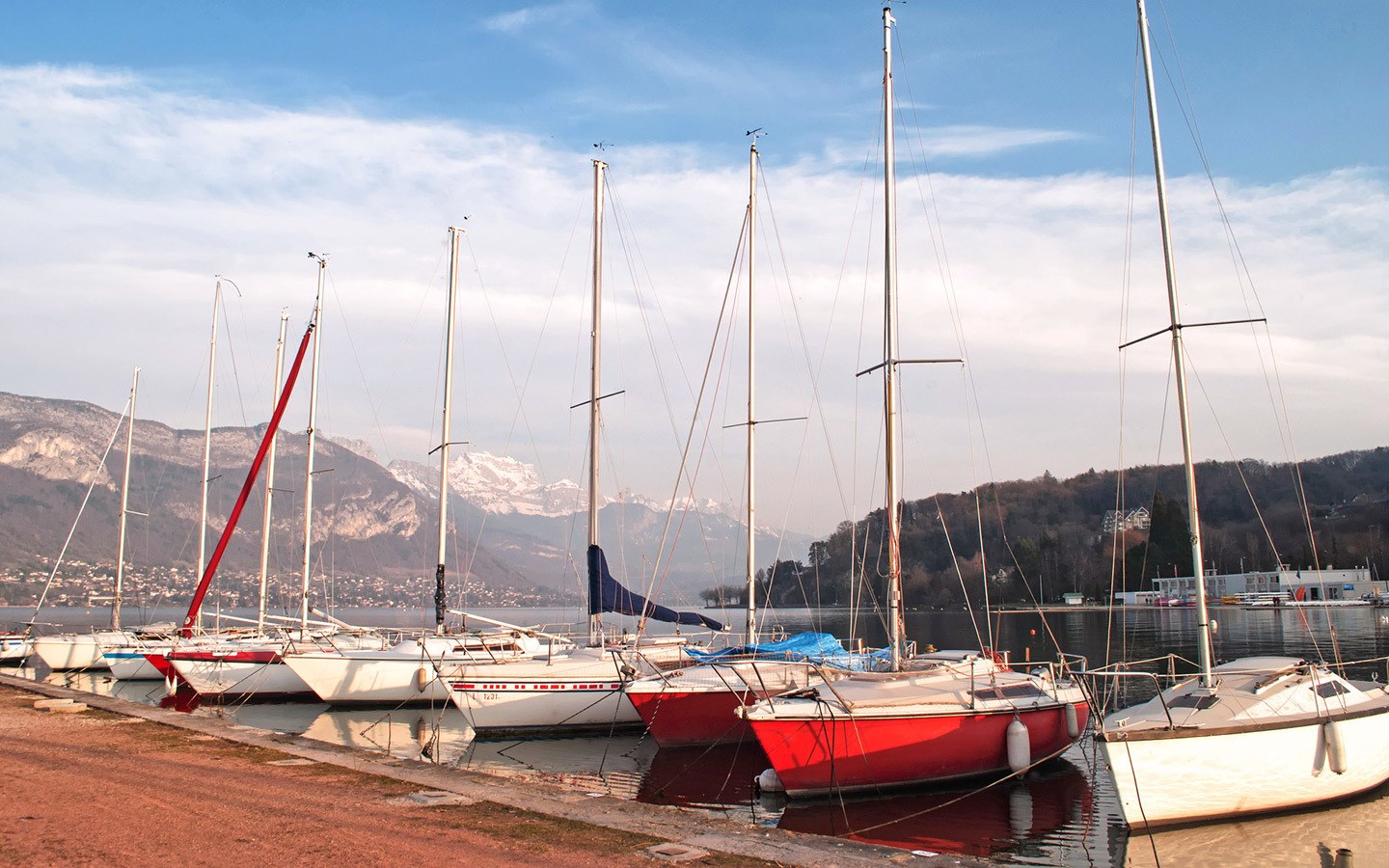 Boats lined up on the lake shore at dusk

Annecy’s old town – the Vieille Ville – has more waterways than roads, surrounded by pretty, pastel-coloured buildings. The water comes from the River Thiou, which at only 3.5km long is one of Europe’s shortest rivers, connecting the River Fier to Lake Annecy. But what it lacks in length it makes up for in scenic surroundings. The river splits and rejoins around the old town, creating islands linked by arched bridges, draped in flowers during spring and summer.

A network of narrow streets and passages take you past turreted castles, quirky shops and a seemingly endless number of gelateria where you can get your ice cream fix. There are also plenty of cafés and restaurants, most of which have tables lined up along the riverbank to soak up the sunshine. It’s somewhere to go wandering, get lost and see what you discover. 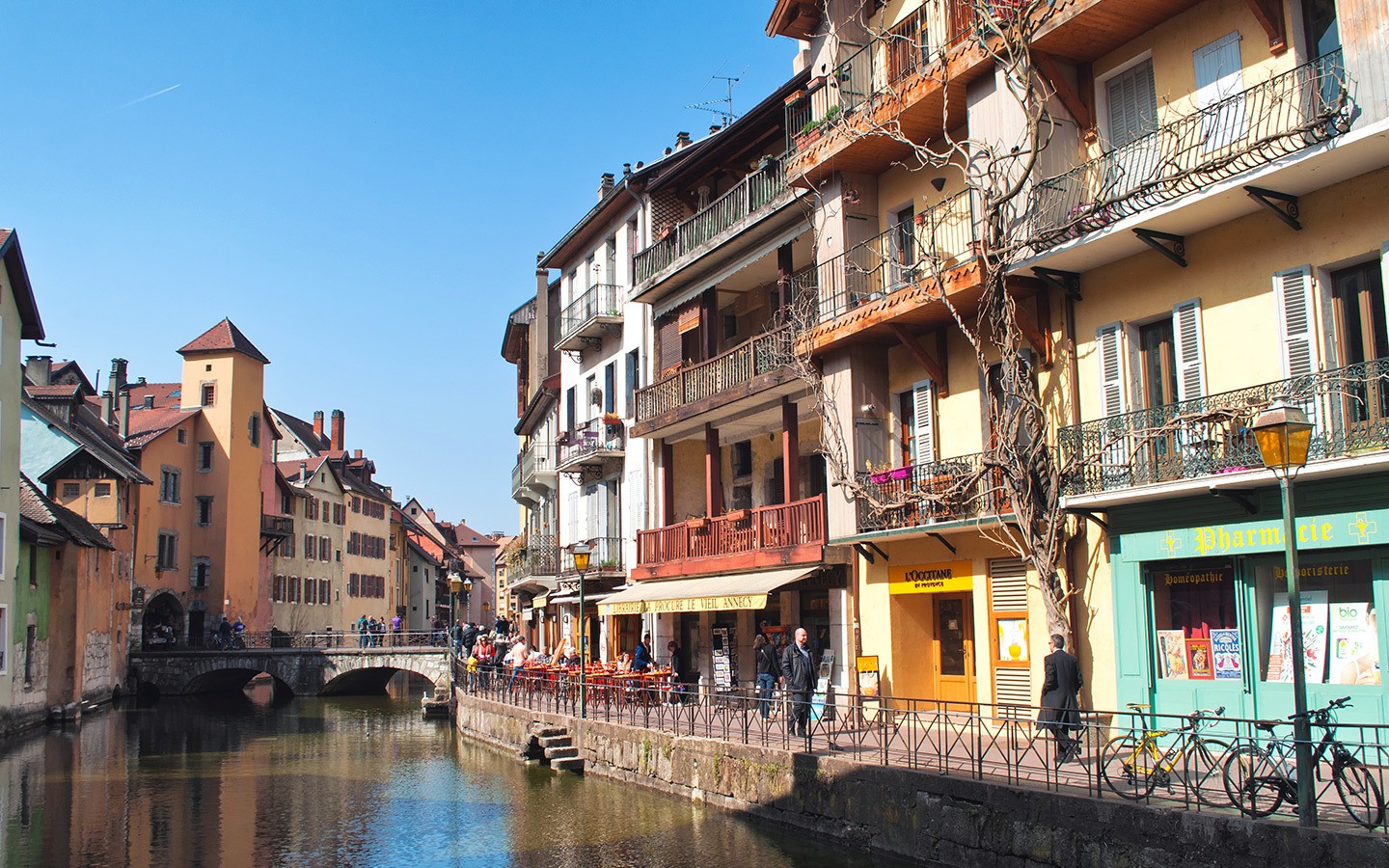 Pathways along the water’s edge in the old town

Climb up to the castle

Built on a hilltop, the Château d’Annecy towers over the town, so you’ll burn off that gelato on the climb up to the top. The castle was built as a residence for the Counts of Geneva and the Dukes of Genevois-Nemours from the 13th to 16th centuries, but it was later damaged by fire and abandoned in the 17th century. Later it was turned into a barracks before being bought by the town after the Second World War and restored back to its former glory.

Now it’s used as a museum with a couple of different sections – one with local furniture, sculptures and art, and the other with exhibits about the people and wildlife living around the lake (entry €5.50 for adults, €3 for under 25s and free for under 12s). Don’t miss the castle’s terrace for a fantastic panoramic view down into the old town and across the lake. 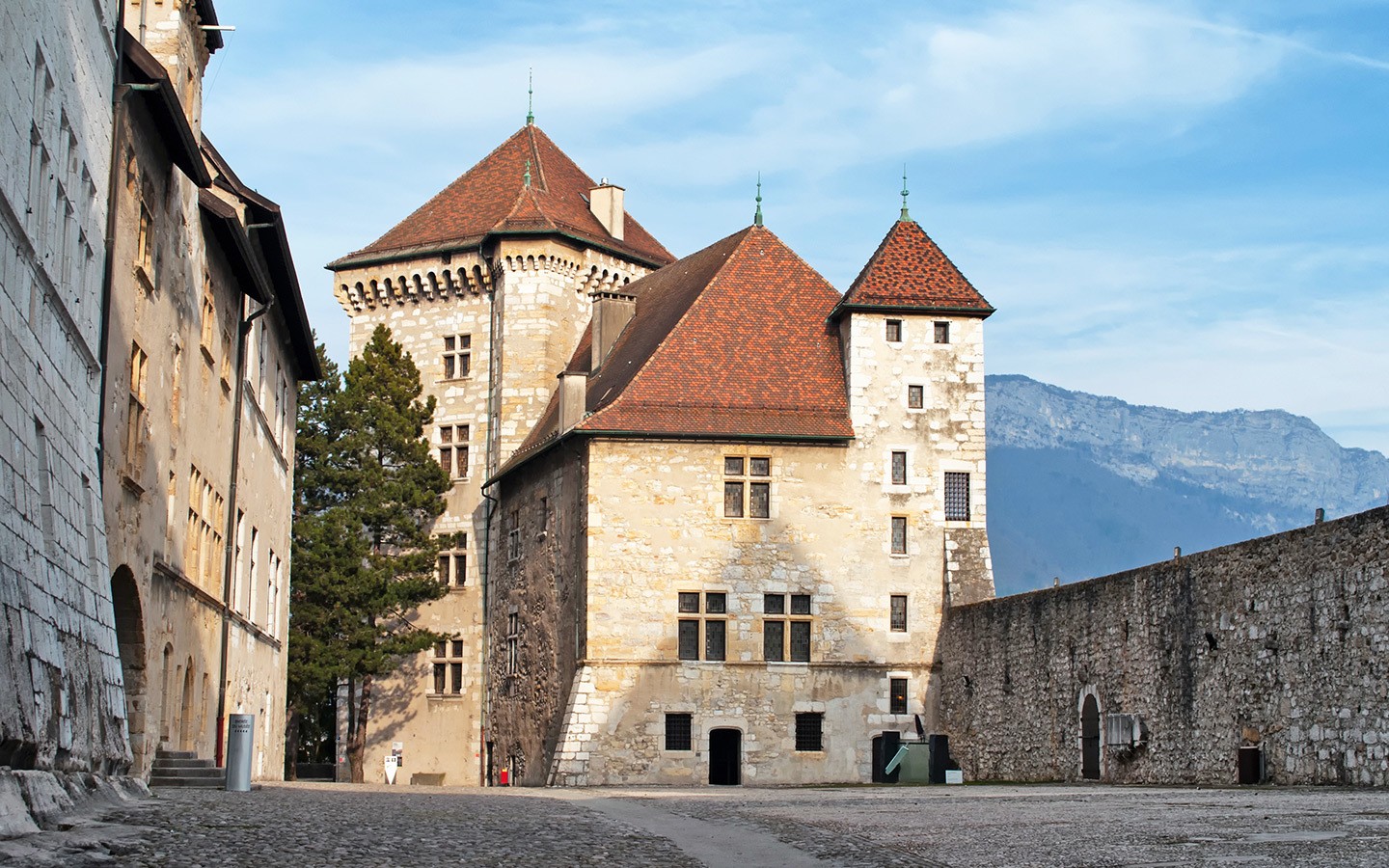 France’s third largest lake, Lake Annecy is known as the blue lake, and you can definitely see why when the sun hits its clear water. It’s Europe’s cleanest lake (though I probably wouldn’t advise drinking it) with the water coming from snow melting in the Alps. There are walking and cycling paths along the edge of the lake, as well as sandy beaches in the summer.

One of the best ways to see the lake is to get out on the water. Between February and December, a one-hour boat trip takes you on a circuit around the lake, past pretty lakeside villages and an island castle, backed with snowy mountain peaks (€14.20 for adults and €9.60 for children aged 5–12). From spring to autumn there are also longer two-hour cruises and a shuttle between the lakeside villages, as well as lunch and dinner cruises onboard the MS Libellule. 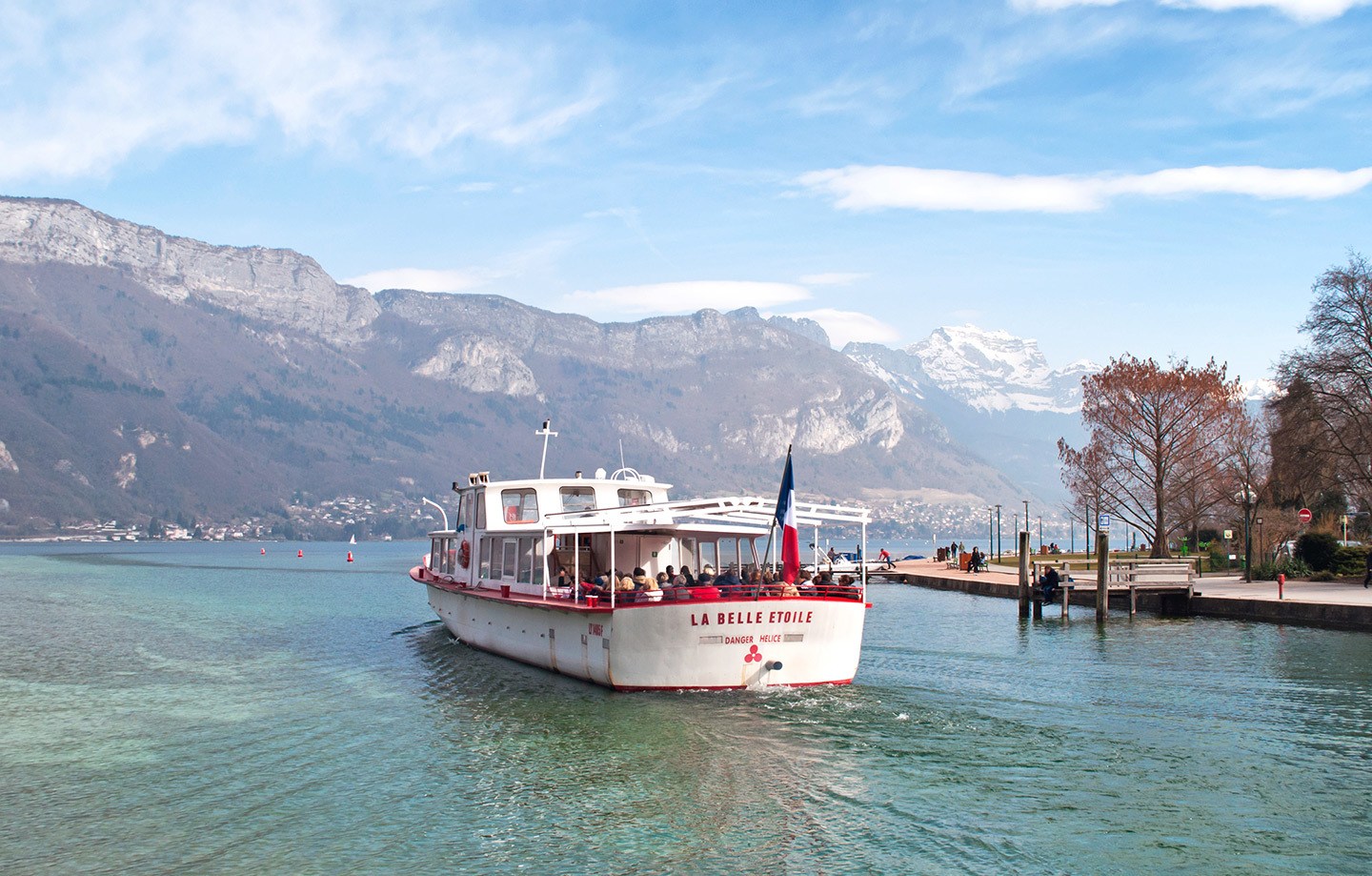 Fill up at the market

There’s something special about French markets, with their huge piles of colourful vegetables and pungent smelling cheeses. And Annecy’s market has one of the best locations, stretching along the bridges and narrow streets of the old town. Markets are held on Tuesdays, Fridays and Sundays from 7am–1pm, selling fresh local produce from fish to flowers.

You can check out the local specialities, and if you want to buy the stallholders will often let you have a taste first. Well worth trying are the tasty salami-style sausages which are made with flavours like mushroom, goats’ cheese and hazelnut. And the creamy reblochon cheese, which is used in mountain dishes like tartiflette. If you’re in town on the last Saturday of the month, there’s also a big arts, crafts and flea market which runs from around 8am–5pm. 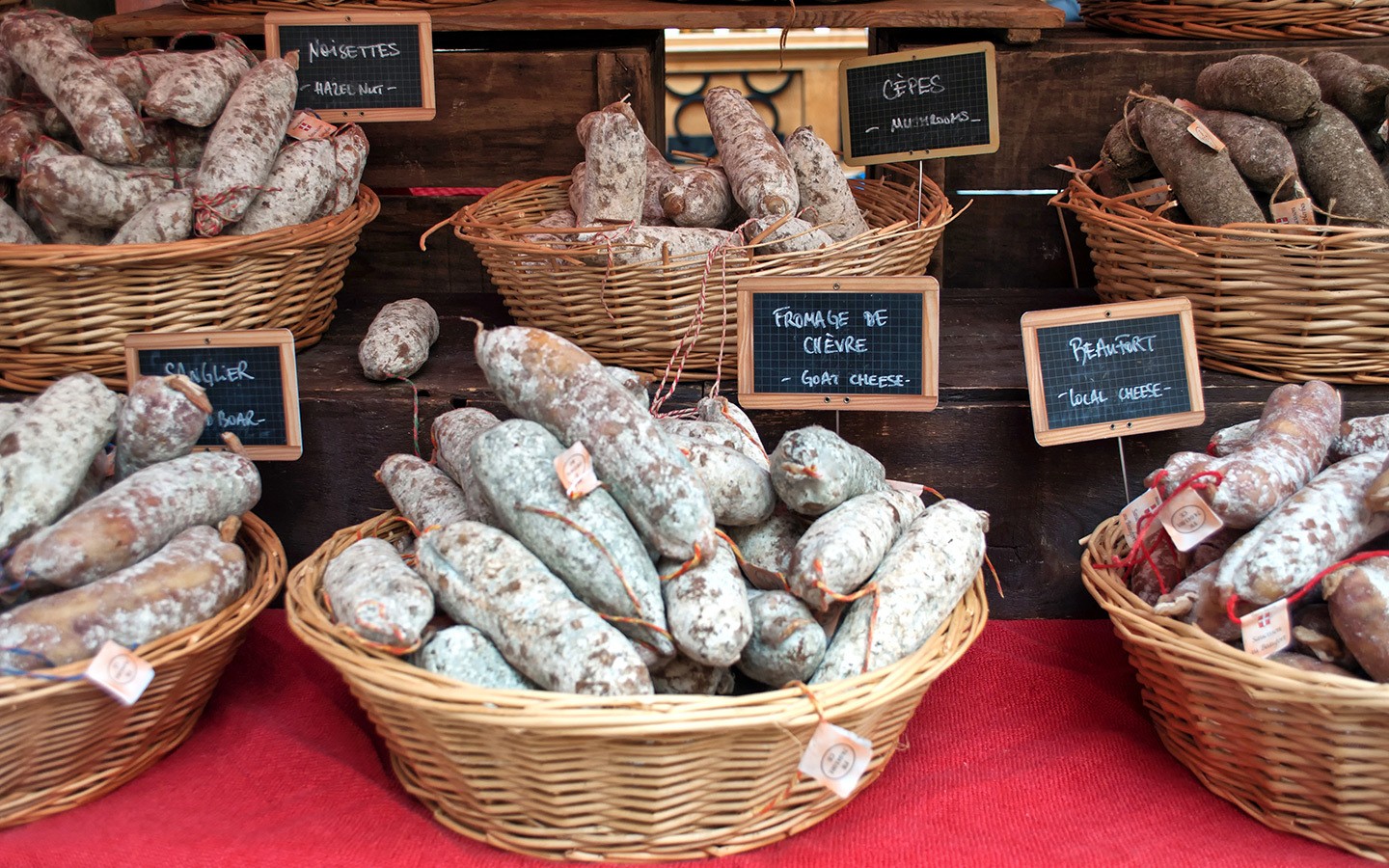 Get sent to prison

Right at the heart of Annecy’s old city is the Palais de l’Île – the town’s most famous and photographed building. It was built back in the 12th century on a triangular island that lies between two forks of the river. It looks like a miniature fairytale castle but it has actually been used as a mint, a courthouse and a prison over the years.

Today the Palais is home to a small museum with exhibits about local history and architecture, but it’s best appreciated from the outside. Take a walk through the old town at night too when you can see it all lit up. Lights in the canals shine upwards and the turrets at the front of the Palais are lit from inside so the whole place glows in the dark. 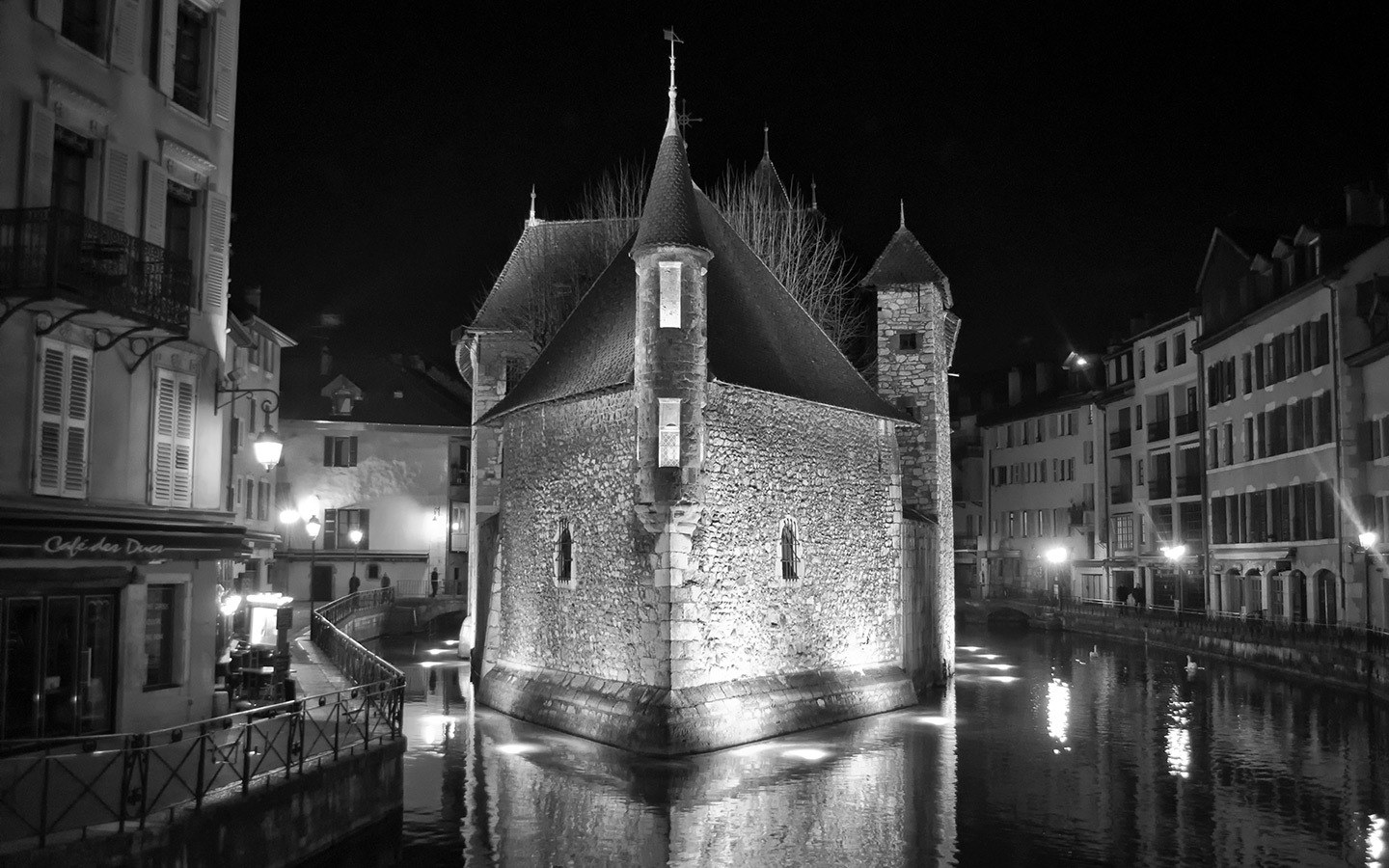 Head into the Aravis mountains

There are enough things to do in Annecy to keep you busy for a weekend. But if you’ve got more time then the town is surrounded by some spectacular mountain scenery that’s easy to access. The Aravis mountain range is around 40 minutes’ drive away and is home to four ski resorts – La Clusaz, Le Grand Bornand, Manigod and Saint Jean de Sixt. Buses connect Annecy with the main ski resorts or you can hire a car for the day and go exploring.

Visit the pretty Savoyard village of La Clusaz or head on up the zig-zagging road to the Col des Aravis mountain pass for stunning views across to Mont Blanc. In winter you can go snowshoeing or take a husky ride, or in summer it’s popular with cyclists, but you need to be fit – the pass has route of the Tour de France several times. There are also a couple of restaurants serving mountain specialities and a tiny chapel dedicated to St Anne, protector of travellers. 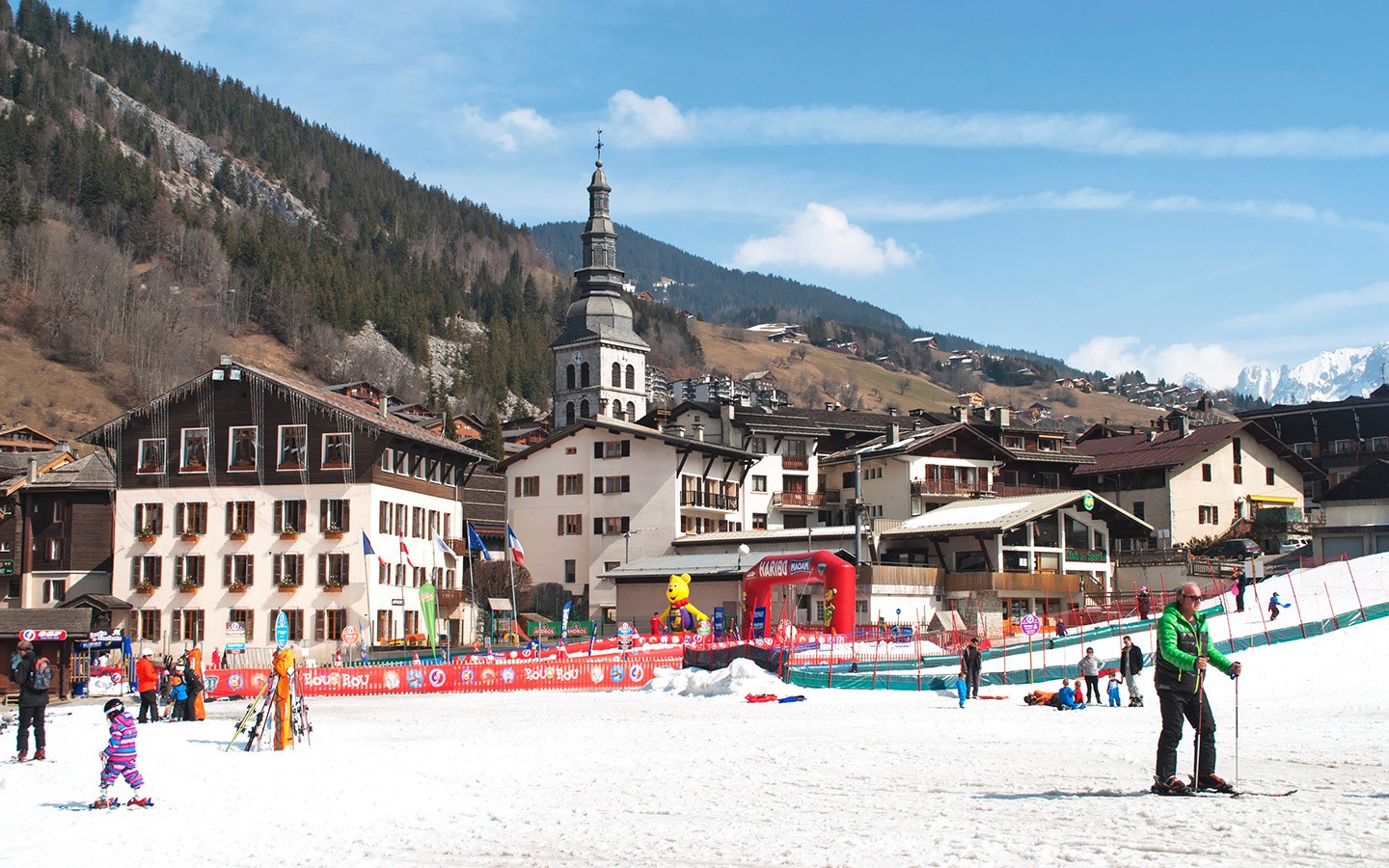 Looking for somewhere to stay in Annecy? 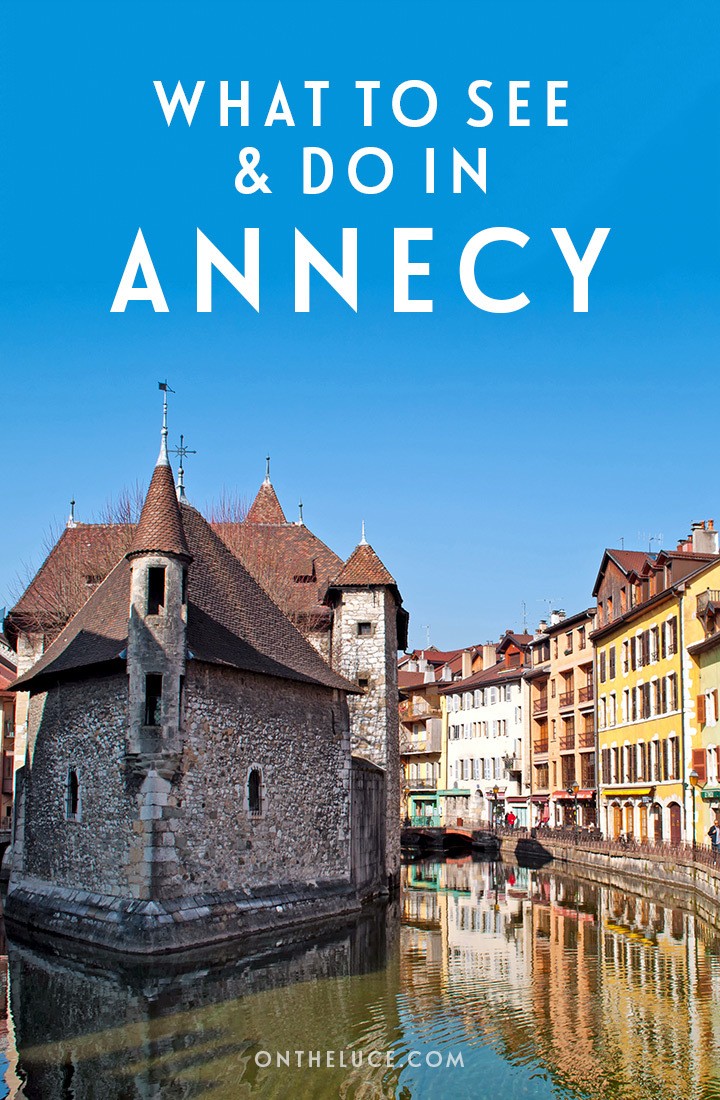 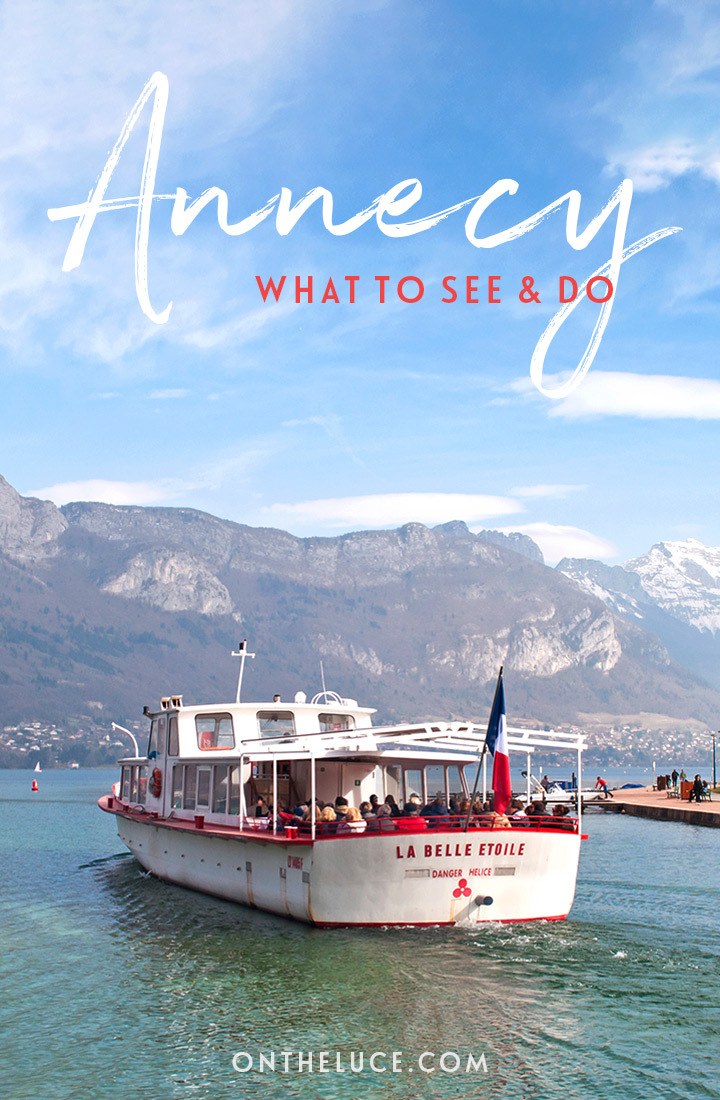 Love it! I went here several times during my semester abroad in Grenoble back in 2012, and now photos of this gorgeous place are all over Instagram! I’m glad it’s getting the appreciation it deserves but I loved that it was France’s best kept secret too. Totally agree with all of these things to do! The scenery of this Alpine town is perfect!

It's so lovely isn't it! Definitely getting popular now though so I hope it doesn't spoil the charm.

Visiting annecy for 3 days coming up shortly, from what I've read and the pictures I've seen it looks fabulous..

Such a lovely place – hope you have a great trip!

Annecy is one of my favorite places to visit! I will also add parasailing to the list, it's beautiful sailing above the shimmering waters of the lake !

Sounds amazing – one to try next time!

Definitely one of the best posts about Annecy that I've come across. I'm considering going there in the near future and I've been looking for helpful information. Thank you very much for sharing this! :)

Thanks so much, really glad you found it useful and hope you enjoy Annecy, it's still one of my favourite places in France!

I'm new to your blog and loving it. Photos are beautiful too. As an Aussi travel tragic I envy you having such diversity on your doorstep that is so accessible.

Thanks so much. Yes we are so lucky to have such a range of places so close to the UK – though I spent a year in Australia and you have some stunning spots too!