Looking for Scotland’s most scenic road trip? A guide to driving the Glen Etive road near Glencoe in the Highlands – 12 miles of lochs, moors and mountains used as a location for Bond film Skyfall.

In the heart of the Highlands near Glencoe, the Glen Etive road is 12 miles of peak Scottish scenery – mountains, moorland, lochs and huge skies. It might be short but it packs in some seriously impressive views. But could this dead-end, single-track drive be one of the most beautiful road trips in Scotland? I think so, and I’ve got James Bond to back me up.

Author Ian Fleming’s family had a lodge in the glen, and the road was used as a location for Bond film Skyfall. So whether you’re channeling your inner Daniel Craig or just looking for Scottish scenic beauty, here’s all you need to know about driving the Glen Etive road.

Where is Glen Etive?

Glen Etive is in the western Scottish Highlands, 27 miles south of Fort William. To reach Glen Etive, follow the A82 between Glencoe and Bridgy of Orchy. The turning is signposted off the main road close to the Kingshouse Hotel and Glencoe Mountain Resort – on your right if you’re coming from Glencoe and on your left if you’re coming from the south.

There are no facilities in Glen Etive (no shops, toilets etc) and mobile phone signal is patchy. But you basically just carry on until you run out of road, so you can’t go far wrong!

The first part of the road follows the banks of the River Etive, which has its source on Rannoch Moor and is a favourite for whitewater kayakers – it can get wild when there’s been a lot of rain. After driving around four miles along the road you reach the Etive Mor Waterfall, a couple of minutes’ walk from the road, which makes a good photo opportunity.

Carry on a bit further along and you’ll find the location used in Skyfall, where Bond and M stop off in the Aston Martin on the way to Bond’s childhood home, Skyfall Lodge (which was just a film set in Surrey unfortunately). The road winds on through heather-covered moorland before running into a thick forest, where it gets narrower and more enclosed.

The road then passes the Dalness Estate – which was owned by Ian Fleming’s family – as well as a couple of small lochs surrounded by towering mountains, before coming to the tiny hamlet of Gualachulain. Carry on through Gualachulain and you’ll reach the end of the road on the banks of Loch Etive, where there’s a small car park.

Loch Etive is 30km long, 1.5km wide and reaches a depth of 150 metres. Its vast clear waters stretch off into the distance and reflect the sky like a mirror on a calm day. And although it might feel like you’re miles away from the coast, the water is actually salty.

The loch eventually connects to the sea – if you zoom out on the map above you can see how it curves around to the west and meets the sea at Ardmucknish Bay, just above Oban. Originally the road carried on around the edge of the loch to Taynuilt and there also used to be a steamer service taking passengers to Oban in the 1840s.

But today the loch is the end of the line – unless you head out on the water. It’s a great place to explore by kayak, especially on a sunny day when the water is as still as a pond. Otherwise you can take a walk along the edge of the loch before retracing your steps back to the main road, with the views looking completely different from another angle.

What if I want to stay longer?

If a couple of hours isn’t enough time in Glen Etive and you want to spend more time exploring and do some of the area’s walks, there are a few different options.

Wild camping is permitted in Glen Etive, so you can just find a spot by the lake or along the river and pitch your tent for the night. Be aware that there are no facilities though, so you’ll need to bring everything you need and make sure to take your rubbish away with you – the area’s had a problem with litter – and it’s a popular spot so can get busy in summer.

Or you can experience life like a laird at the Dalness Estate. The estate’s refurbished Victorian lodge sleeps up to 14 and comes with its own housekeeper and chef. A three-night stay costs £3600, but there’s also a more modest four-person cottage available to rent.

Looking for somewhere to stay near Glen Etive?* 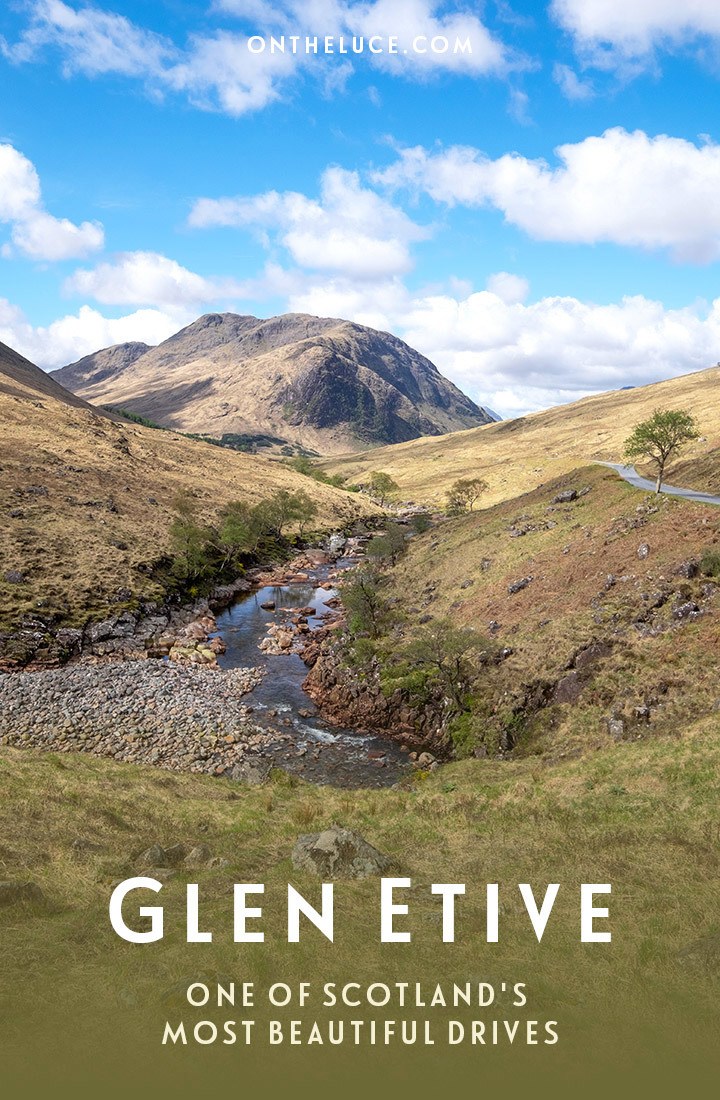 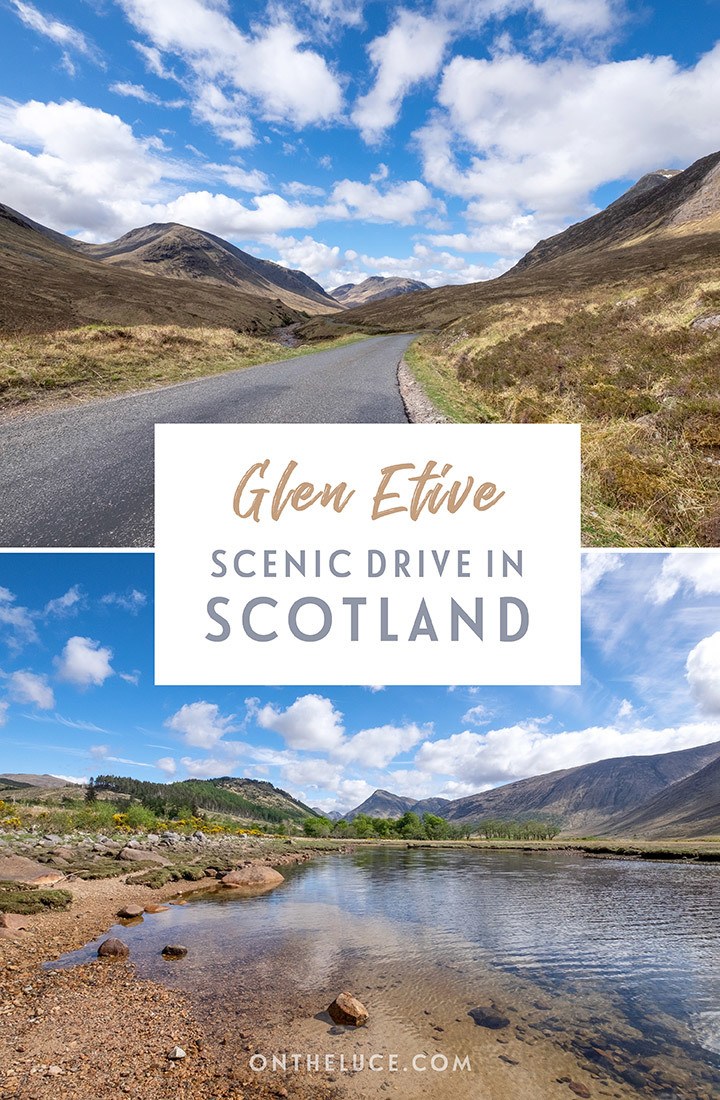 Isle of Skye itinerary: The best of the island in 3 days

12 great things to do in Loch Ness, Scotland

we visit every time we go to scotland, peaceful and relaxing, great article on a great place. thank you

One more tip for both of you, just off the A82 sits the Kings House Hotel. It is a great place for lunch or if later in the afternoon for Tea and Soup. The hotel is right on the West Highland Way, so if you fancy a hike you can start from the carpark.

I did this road in October 2020after reading your blog! It was truly stunning and breath taking drive. I told my boys that we would be doing the bond route in Skyfall...they were thrilled.It had remained one of our main highlights from our visit in the highlands. We also saw some amazing red deer at Glen Etive drive that It was totally awesome. I m returning next year , only to experience this drive again !

That's brilliant, so glad you enjoyed it – and amazing to see some deer too!

Thanks for sharing the drive. By coincidence we are considering a rental some 9 miles down this road in mid January and can you advise on weather conditions when the weather is bleak, ie is it maintained? Thanks for any help.

@Steve, the A82 is well maintained with salt and grit. Not sure about the Glen Etive road, it snowed a few cm the morning we were there, but is had mostly melted. As long the snow is not too deep you should be fine….you’ll be driving slowly regardless taking it all in.

Just happened upon your blog. We are heading for the Highlands next week and will be in Glencoe on Thursday evening. Do you have a favorite restaurant in the area for dinner? We will make the Etive drive Friday morning. Thank you are all the tips!

Hope you have an amazing time – the Clachaig Inn is good for dinner or Lochleven Seafood too.