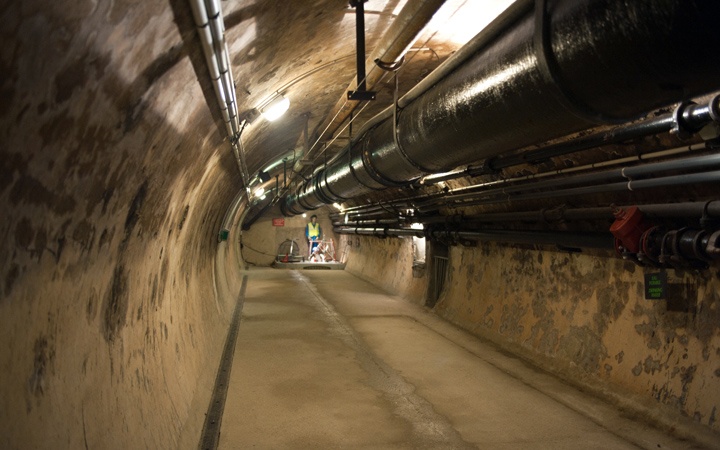 So I know I said I wanted to see some of the more unusual sights of Paris, but aren’t the sewers a step too far? After visiting another of Paris’ underground attractions, the catacombs, I heard that part of the sewer system had been turned into a museum – Le Musée des Égouts de Paris. It might sound like a strange place to visit, but if you’re looking for an alternative to the usual museums and sights, interested in engineering, a fan of Les Misérables (the sewers were the hideout of Jean Valjean), or just looking for somewhere cool to hide out on a hot day, you might be tempted to head down into the underbelly of Paris. 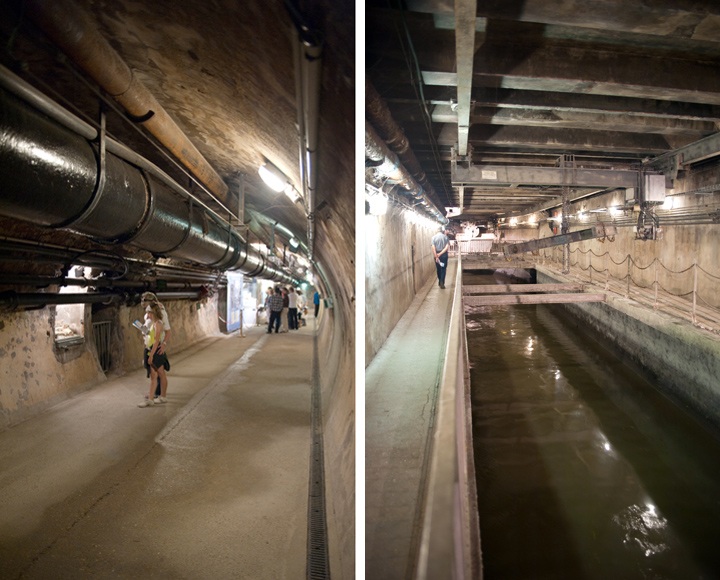 Paris’ first sewers were built in 1370 – before then waste just ran down a channel in the middle of the road. The early sewers were still open which didn’t do much to help prevent disease. So in the 1800s, Baron Haussman designed a new system with underground tunnels for drinking and non-drinking water as well as waste. The tunnels ran for over 373 miles by 1878 and hundreds of miles were added over the next few centuries, forming a network below the surface mirroring the one above, right down to the street signs.

“Paris has another Paris under herself; a Paris of sewers; which has its streets, its crossings, its squares, its blind alleys, its arteries, and its circulation, which is slime, minus the human form” (from Les Misérables). The sewers have always interested visitors to Paris and tours started back in Victor Hugo’s time. Then you could travel around the tunnels in carriages pulled by a locomotive, and later on you could even take a boat trip along the sewers. But it’s all a bit more sanitary now. 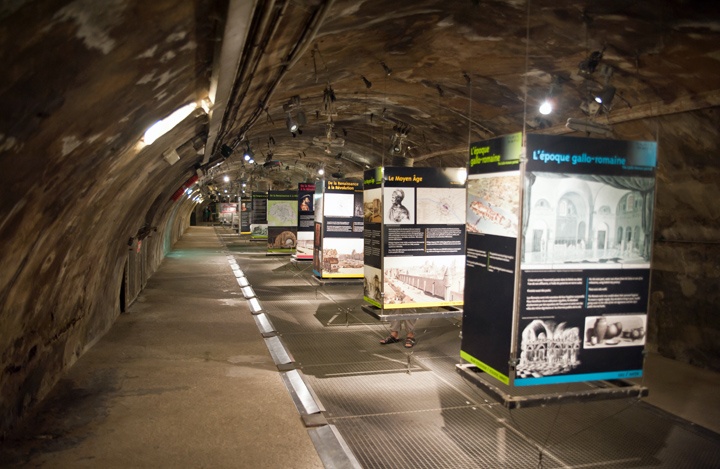 Some of the museum’s exhibits

The entrance to the sewer museum is near the Pont de l’Alma bridge. After buying your ticket at the ticket office on the surface, you descend down stairs to the large underground galleries. The tunnels are quite wide and spacious, in contrast to the more claustrophobic tunnels of the catacombs; built of modern concrete rather than the old stonework you might imagine. When you see some of the machinery used you realise why they need to be big – like the huge metal balls used to clean the tunnels which push through any blockages by a build up of water pressure behind them.

Other exhibits show tools and machinery used in the past. And as you can’t have a sewer without rats, there’s even a few stuffed ones in a glass case. But the whole exhibition is not as dirty – or smelly – as you might imagine, though you’re probably best to follow the instructions to wash your hands after you leave. There’s even a gift shop at the end where you can satisfy all your waste-related gift needs to commemorate this less glamorous, but vitally useful, side of Parisian life. 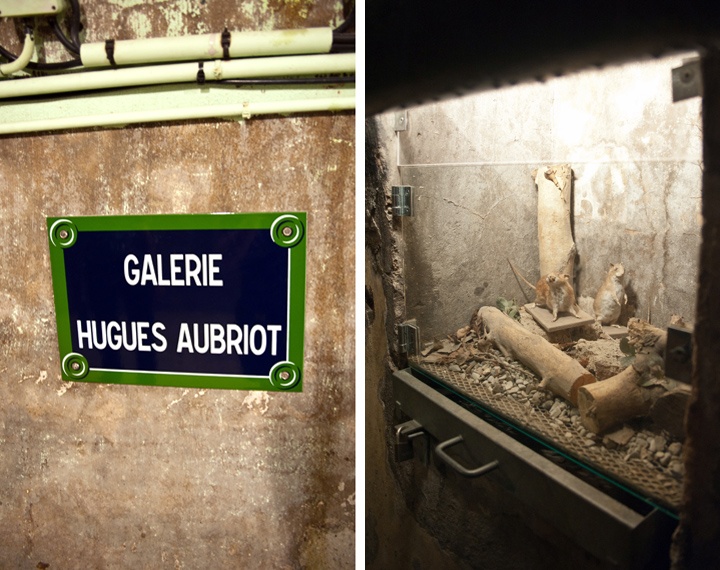 One of the underground ‘road’ signs, and some stuffed rats

The entrance to the Musée des Égouts de Paris is by the Pont de l’Alma, opposite 93 Quai d’Orsay. The nearest Metro station is at Alma-Marceau. The museum is open Saturday–Wednesday, 11am to 5pm (or until 4pm from October to April) and entry costs €4,30 for adults or €3,50 for children aged 6–16. Tours are self-guided and take about an hour. 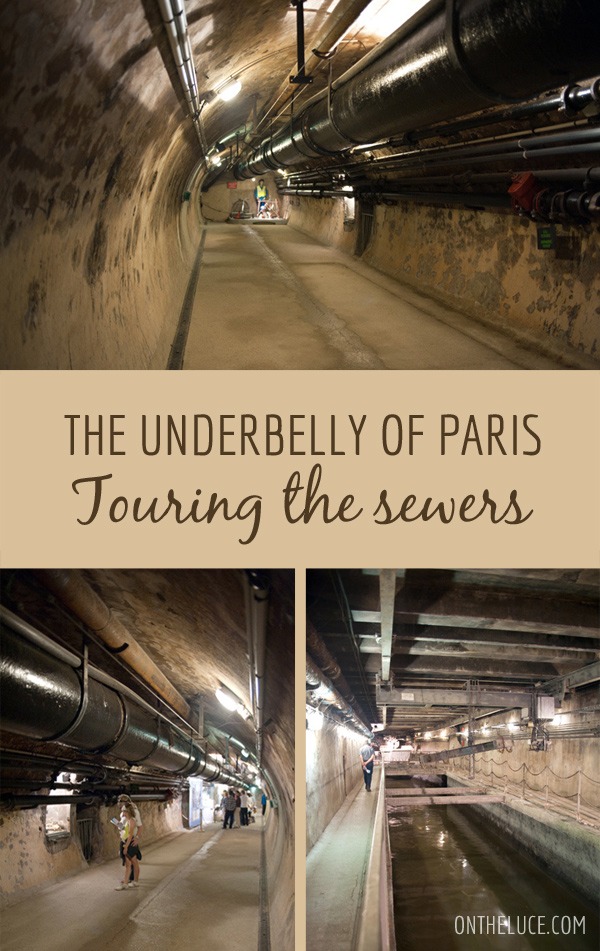 Fascinating! I've heard of underground subway tours, but never the sewer! I'm an urban planner, so I do remember learning in grad school that modern city planning all started because of the need to deal with the poor public sanitation in rapidly-growing cities (late 19th/early 20th centuries). I've got to check this out when I'm there!

As an urban planner sure you'll be really interested in it all. It's a pretty unusual thing to see on holiday but it makes a good story!

This is a unique and different from the museums I've visited.Looks interesting.I'll definitely visit this museum on my next Paris vacation.Thanks for sharing Lucy!

It's certainly an unusual one! Hope you enjoy it if you do visit.

My kids would love it! Added to the to do list. Thanks!

It's the sort of things kids would definitely love!

Thanks Ana, it was definitely a unusual perspective on Paris!

That's got t be one of the most bizzare tours I've heard of!

It shows you can make a tourist attraction out of pretty much anything!