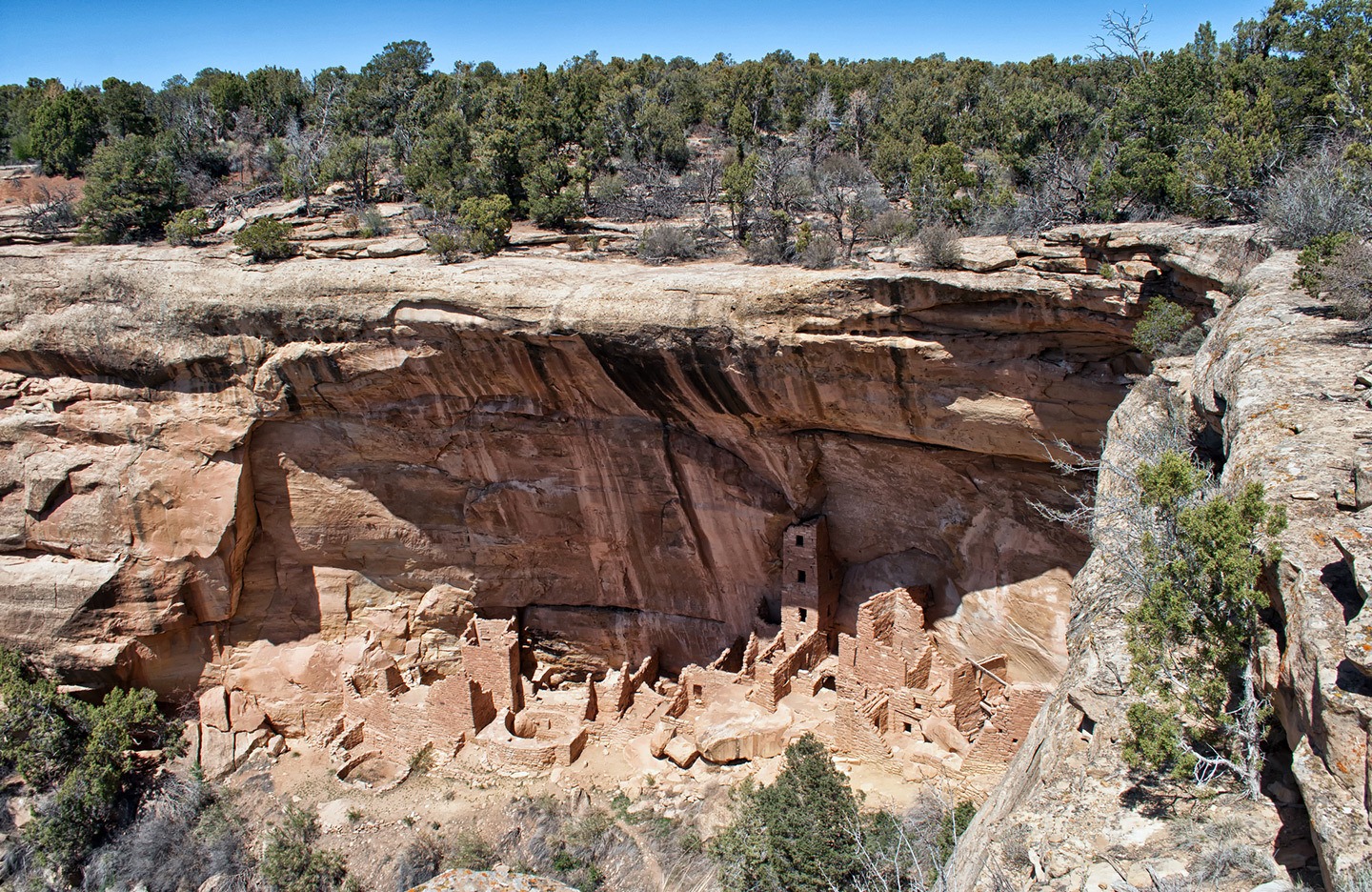 In a region of the Southwest USA packed with spectacular National Parks, Mesa Verde in Colorado is the odd one out. It might have the panoramic views, dramatic cliffs and rocky landscapes of nearby Arches or Canyonlands. But rather than dating back millions of years, the rock formations that make Mesa Verde unique were man-made less than a thousand years ago. They’re the work of the Ancestral Puebloan people, and how they came to be here and just what happened to them are just some of the mysteries of Mesa Verde National Park. 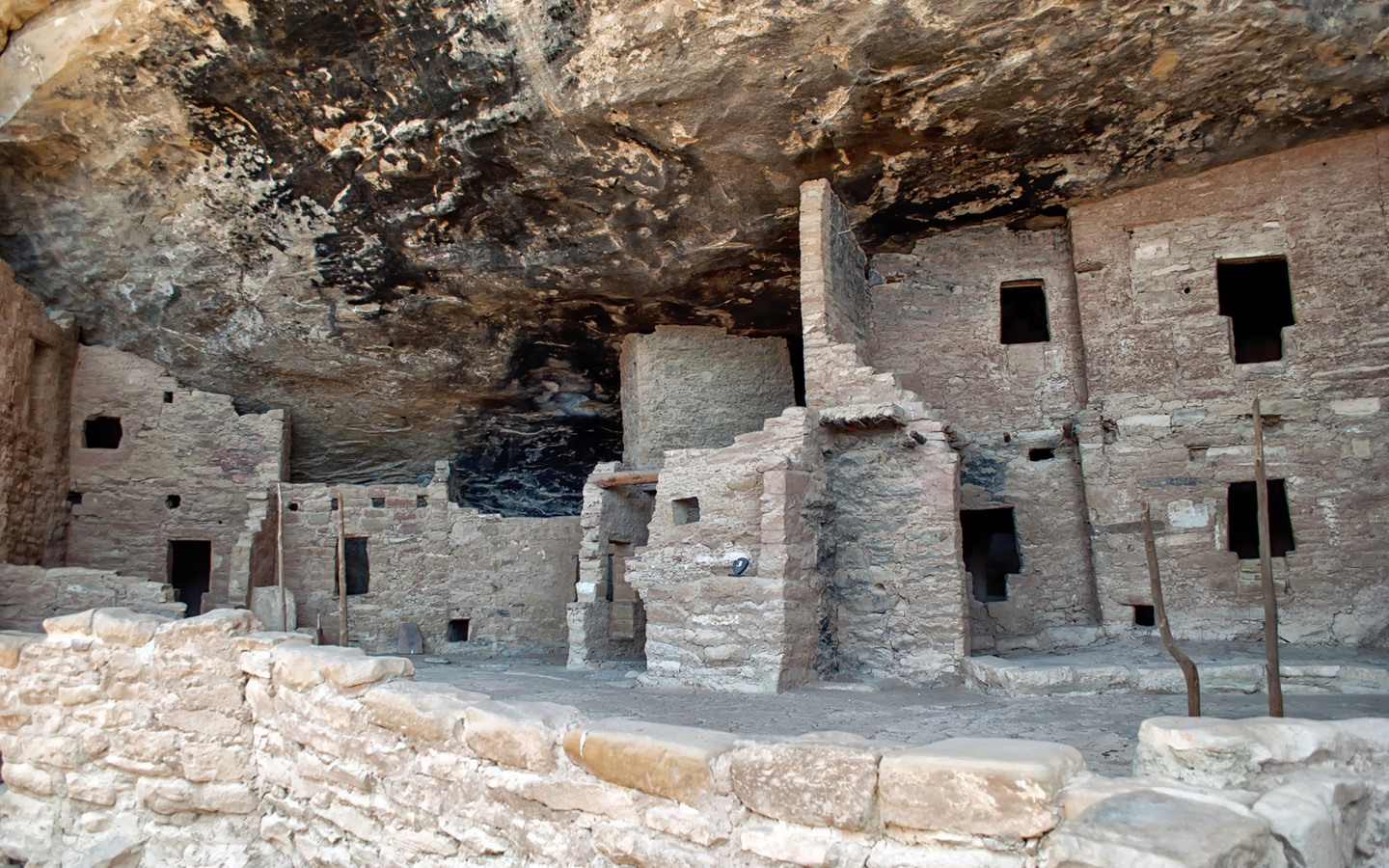 The Ancestral Puebloans were a group of Native American people, also knows as the Anasazi, who lived in the ‘Four Corners’ region of the Southwest USA, where the states of Colorado, New Mexico, Utah and Arizona all come together. They moved into the Mesa Verde area around 550 AD, swapping their traditional nomadic way of life for a more settled lifestyle as they built simple pit houses on top of the plateau and traded hunting and gathering for farming.

The pit houses were pretty basic, with a living room sunk a few feet below ground and timbers to hold up the roof. But within a few hundred years, the Puebloans had abandoned the mesa top and moved down into the cliffs themselves. They’d learnt to build with stone and constructed houses, kivas (meeting rooms) and even whole villages, which were carved out of the solid sandstone rock faces. And it’s these cliff houses that make Mesa Verde so special. 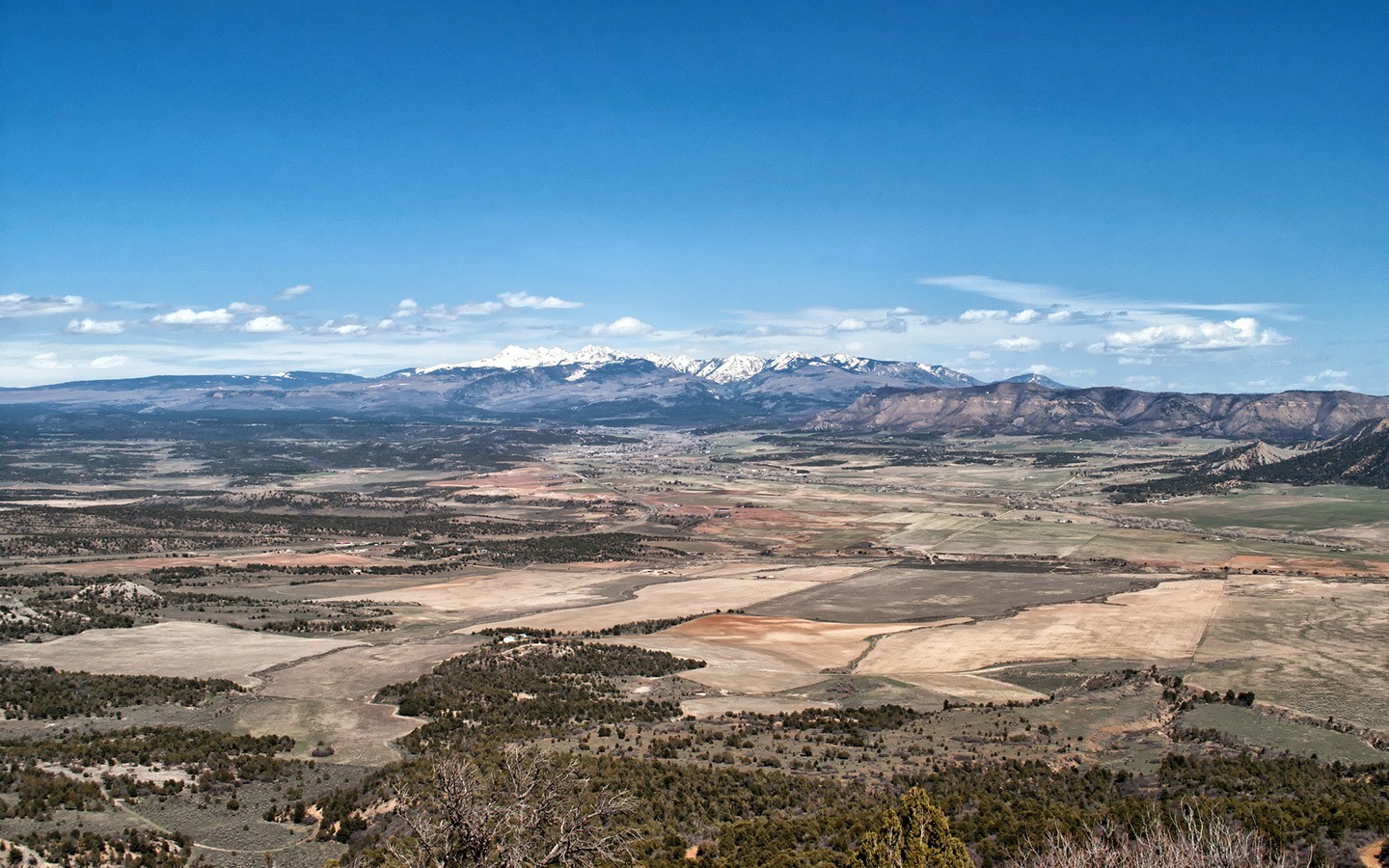 Mesa Verde covers 80 square miles, with almost 5000 archaeological sites discovered so far, including 600 cliff dwellings. It’s a UNESCO World Heritage site as well as a National Park, and gets its name from its location on a mesa – a high ‘table’ or plateau of land. So to reach the park the first thing you have to do is climb. The Mesa Verde plateau is around 8000 feet high, so from the main highway the road winds its way upwards for 20 miles, through switchback turns and past sheer drops, with a spectacular view of the Four Corners from the top.

Mesa Verde National Park is split into sections. Chaplin Mesa area is the easiest to access and has the greatest concentration of archaeological sites. Wetherill Mesa is quieter – and only open from May to October because the narrow winding access road gets blocked by the snow. You can walk or cycle a five-mile loop to reach Wetherill Mesa’s cliff houses and trails, but can’t reach them by car. So with a limited time to spend we focused on exploring Chaplin Mesa. 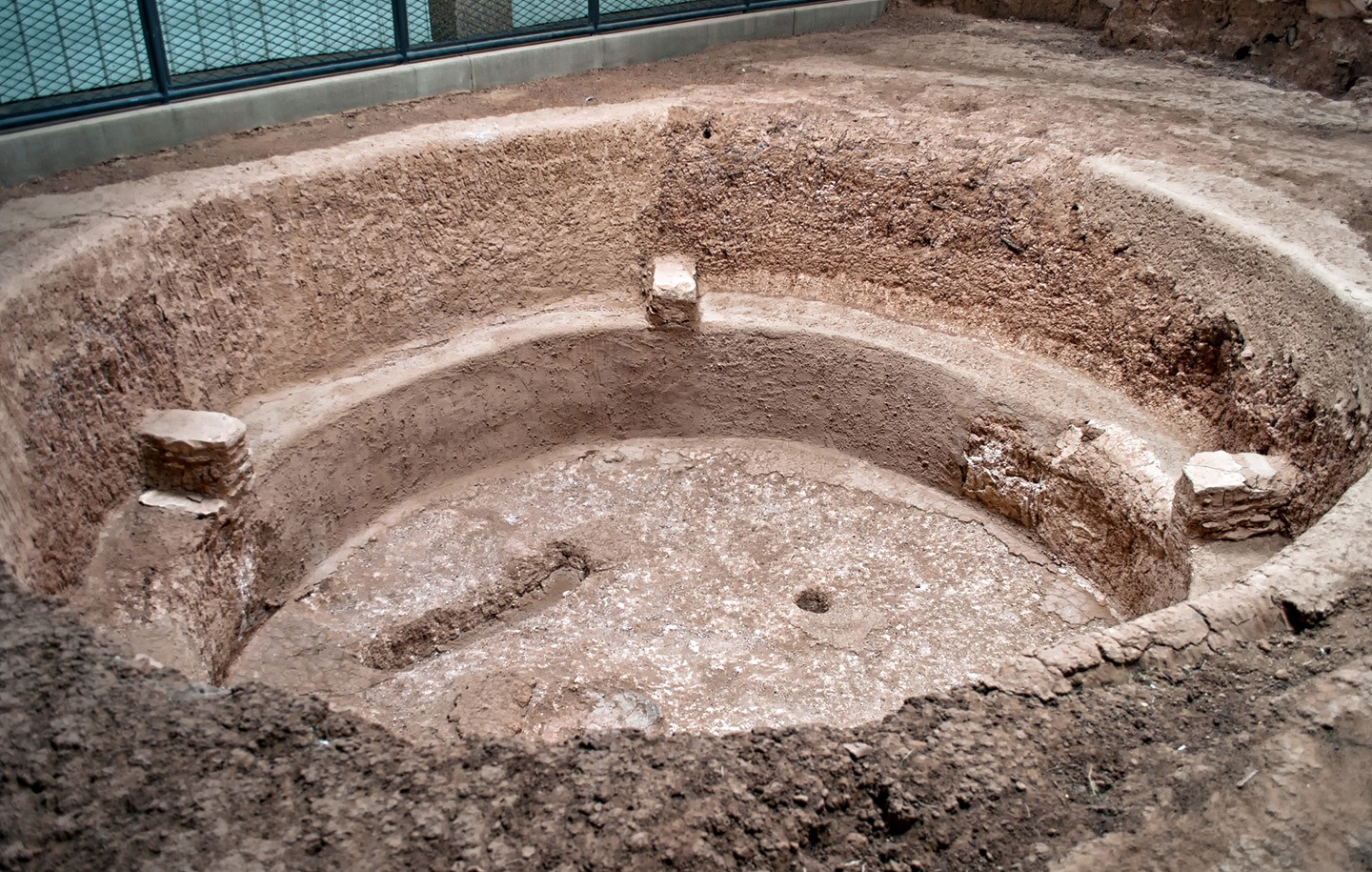 One of the early pit-houses

The Mesa Top Loop road is a six-mile driving route that takes you through some of Chaplin Mesa’s earliest Puebloan sites. The 12 sites and lookouts along the way start with the most primitive pit-houses before moving on to more elaborate mud-brick adobe buildings. But most impressive are the cliff houses, which were built from around 1100 AD.

No one knows exactly why the Puebloans moved down into the canyons, but one theory is that as the climate got warmer the mesa got drier, so they wanted to be nearer to the water. As the area’s so high and exposed, being tucked away under the overhanging cliffs also provided shelter from the cold winter winds and protection from wildfires. Mesa Verde’s cliff houses were built from sandstone blocks, stuck together with a plaster made from mud and water. 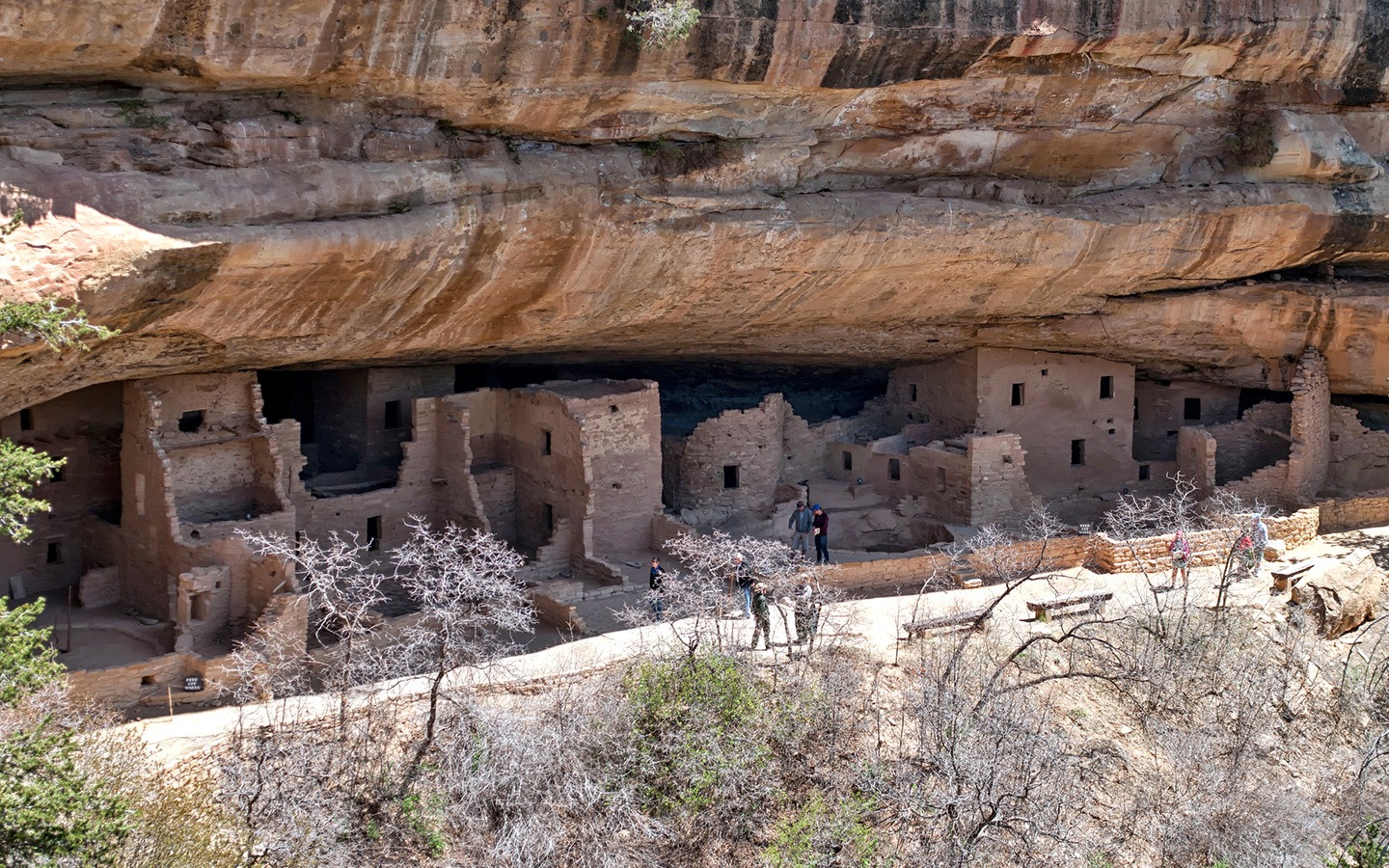 Houses beneath the cliffs

You can take a closer look at four of Mesa’s Verde’s cliff houses – though Spruce Tree House is currently closed off to visitors due to a rockfall at the site. This is the third largest and best preserved cliff dwelling in the park, and when I first visited you could take a self-guided tour. Although it’s closed you can still get a view of it from the overlooks near the Chapin Mesa Archeological Museum, tucked beneath an overhang on the opposite side of the canyon.

Spruce Tree House was the equivalent of an Puebloan block of flats when it was built in 1210, with 130 rooms home to 60 to 80 people. The dry climate and shelter from the rocks mean it’s so well preserved it’s hard to imagine it was built so long ago. When Spruce Tree House is open you can climb inside one of the kivas. These underground chambers were the heart of the community, used by the Puebloans for religious ceremonies and political meetings. 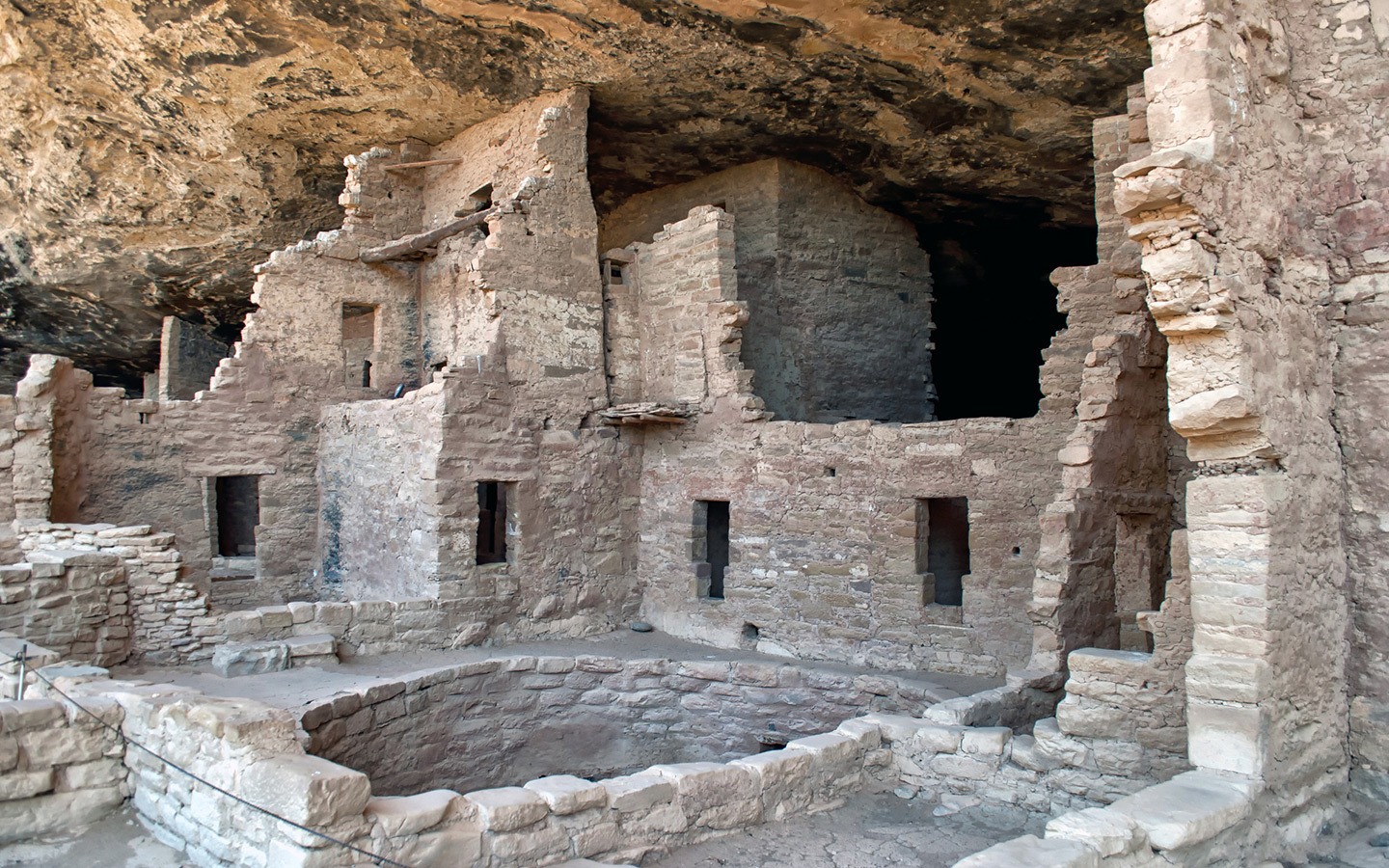 The ruins of Spruce Tree House

To visit Mesa Verde’s other cliff houses, you need to take a ranger guided tour, which you can book at the Visitors’ Centre. Cliff Palace and Balcony House are located on Chaplin Mesa, and Long House is one Wetherill Mesa. Cliff Palace is the biggest of Mesa Verde’s cliff houses, tucked under a giant arching rock overhang. It had 150 rooms, 23 kivas and 100 residents – to get an idea of its huge scale, head to the Cliff Palace Overlook where you get a full panorama.

With 40 rooms, Balcony House is one of the medium-sized cliff houses. But it’s the park most adventurous tour, with an Indiana Jones-style route involving climbing a 32-foot-high wooden ladder and crawling through an 18-inch-wide tunnel to get there. And the Long House in Wetherill Mesa is the park’s second largest cliff house. There’s more hiking to reach the site but that does mean you’re more likely to be able to get a ticket in peak season. 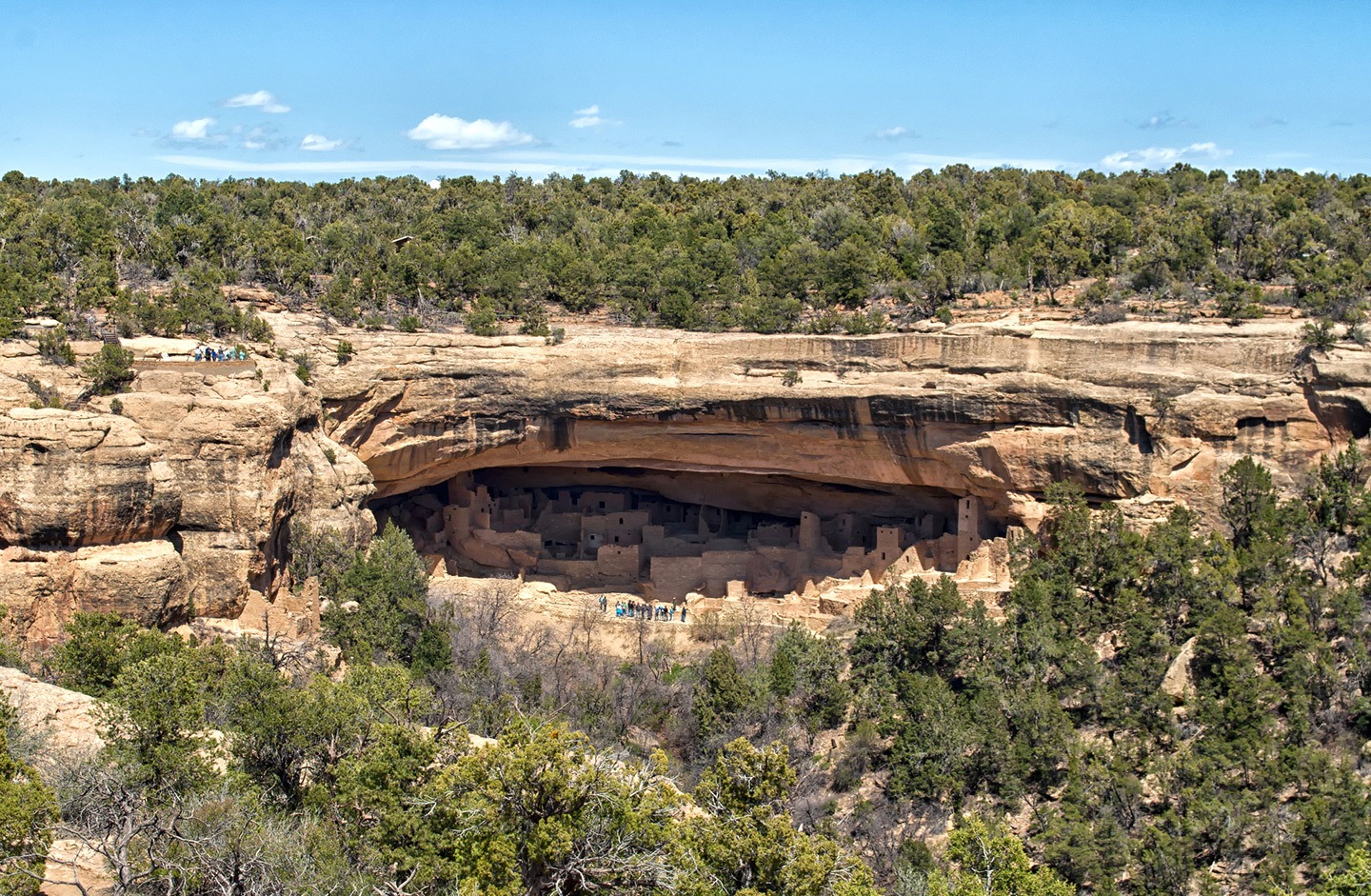 The Ancestral Puebloans lived in Mesa Verde until around 1300 AD. But after building a whole civilisation in the cliffs, one day they just upped and left. The biggest mystery of Mesa Verde is what happened to them, and because there are no written records from the time we’ll never really know. But it’s thought a mix of drought, deforestation and overhunting mixed with a booming population meant they were forced to migrate south to find food.

Once the Puebloans left, the site was lost for the next 700 years, until cowboys looking for lost cattle came across some of the cliff houses in the 1880s. After that word got out and explorers raided the site for Pueobloan pottery and jewellery. So in 1906 Mesa Verde was made a National Park by President Roosevelt. Now it’s preserved as an amazing insight into this lost, 800-year-old world – thought the Puebloans still some of their mysteries to themselves. 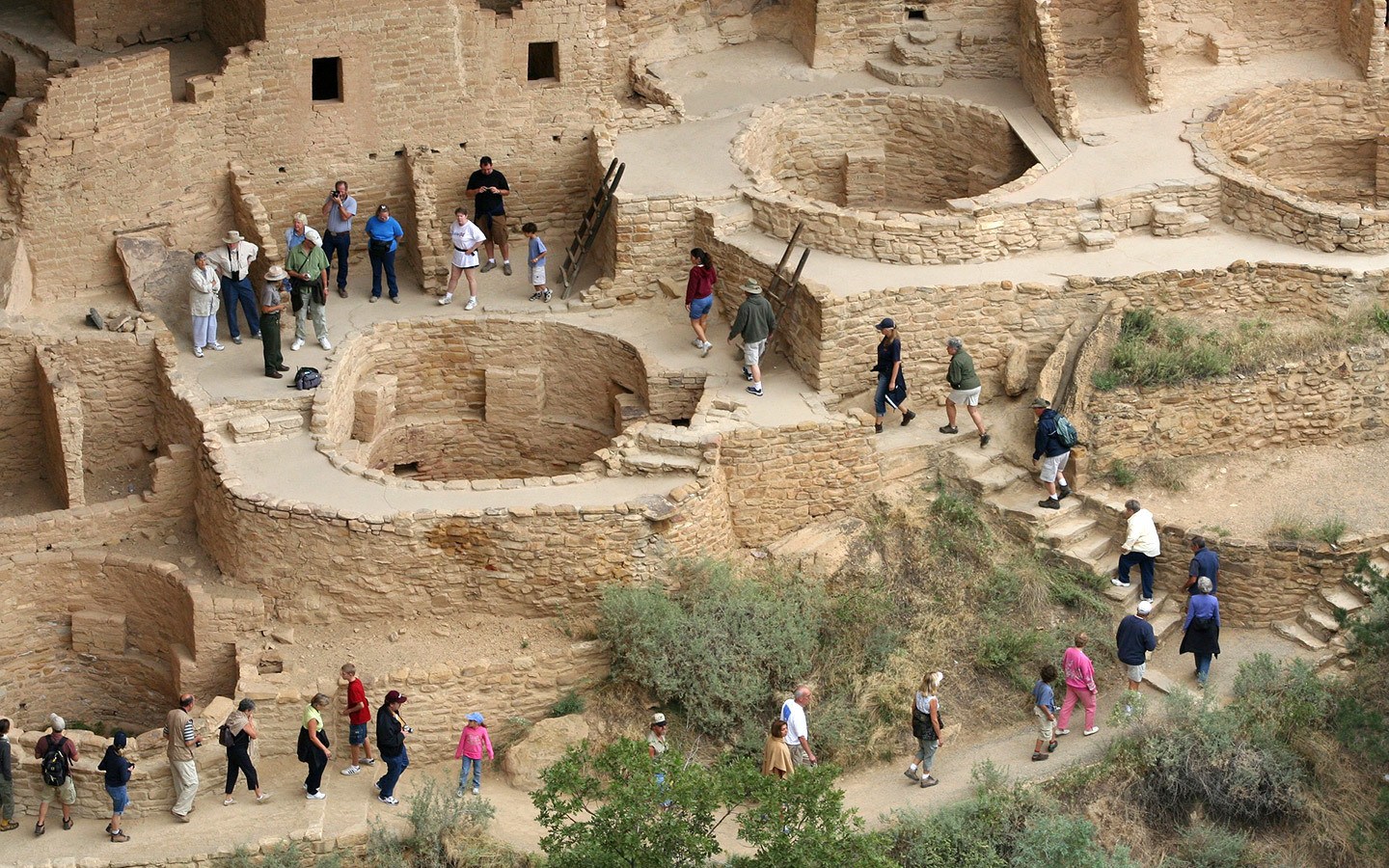 How to get to Mesa Verde

Mesa Verde National Park is located in Colorado, around one hour east of Cortez or 90 minutes west of Durango. It’s easiest to get to and explore the park if you have a car. Though if you don’t want to drive then there’s a full-day tour from Durango which includes travel, entrance fees, lunch and a guided tour of the main sites like Cliff Palace and Balcony House.

How much is the Mesa Verde entrance fee?

Admission to Mesa Verde costs $30 per car from May to October, $20 the rest of the year, or it’s free with an America the Beautiful National Parks Pass. Ranger-guided tours of Cliff Palace, Balcony House and Long House can be booked up to two days in advance at the visitor’s centre (which is right by the turning off Highway 160 and easy to miss) or at the Durango Welcome Centre. Regular tours cost $7 per person, and there are also some special tours at sunrise or sunset or which visit unexcavated cliff houses, costing $25–$45 per person. 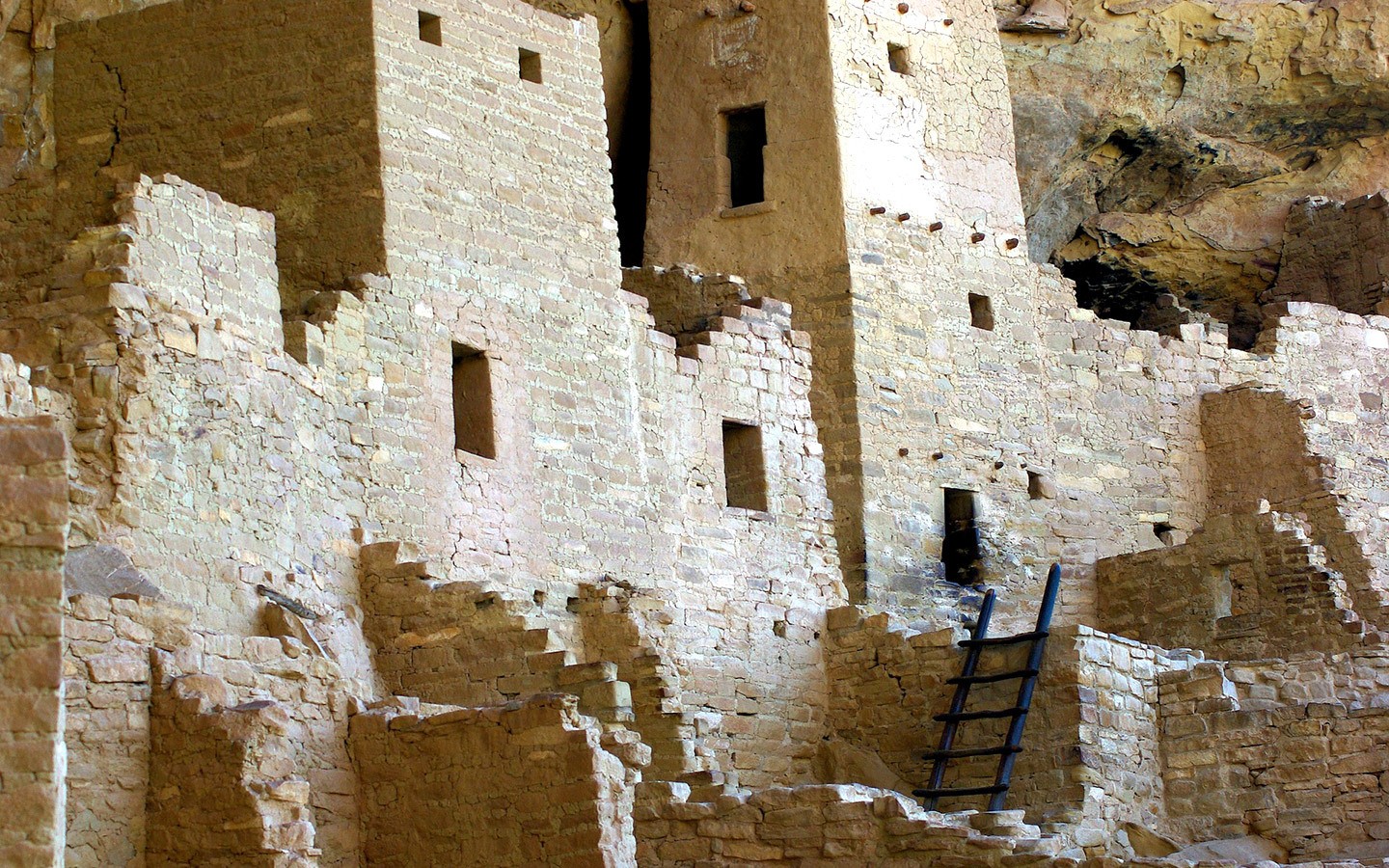 Where can you stay near Mesa Verde?

You can camp right inside Mesa Verde National Park at Morefield Campground, which has plenty of sites for tents and RVs (you need to reserve in advance for RV sites with full hookup). There’s also a café, gas station, shower block, grocery and gift shops on site.

There’s also a Mesa Verde hotel called the Far View Lodge 15 miles inside the park. It’s designed in Western style, with a restaurant and balconies which look out over the park. Also recommended outside the park are the vintage-style Retro Inn at Mesa Verde in Cortez as well as the gorgeous O Bar O luxury cabins out in the forest just outside of Durango. 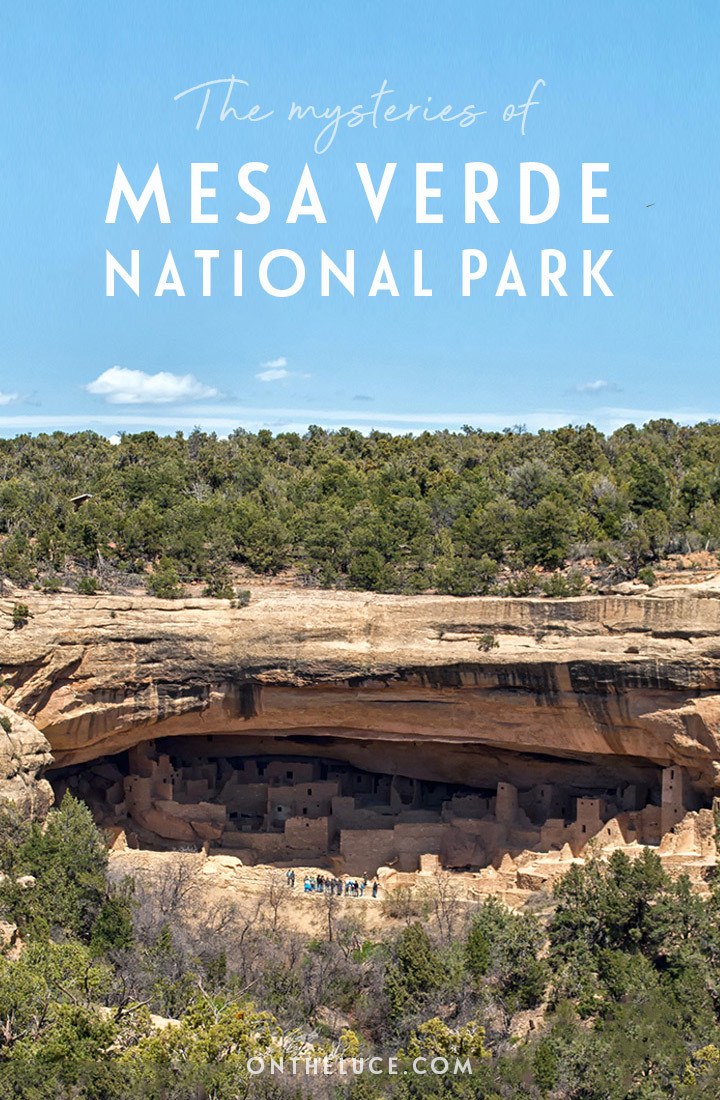 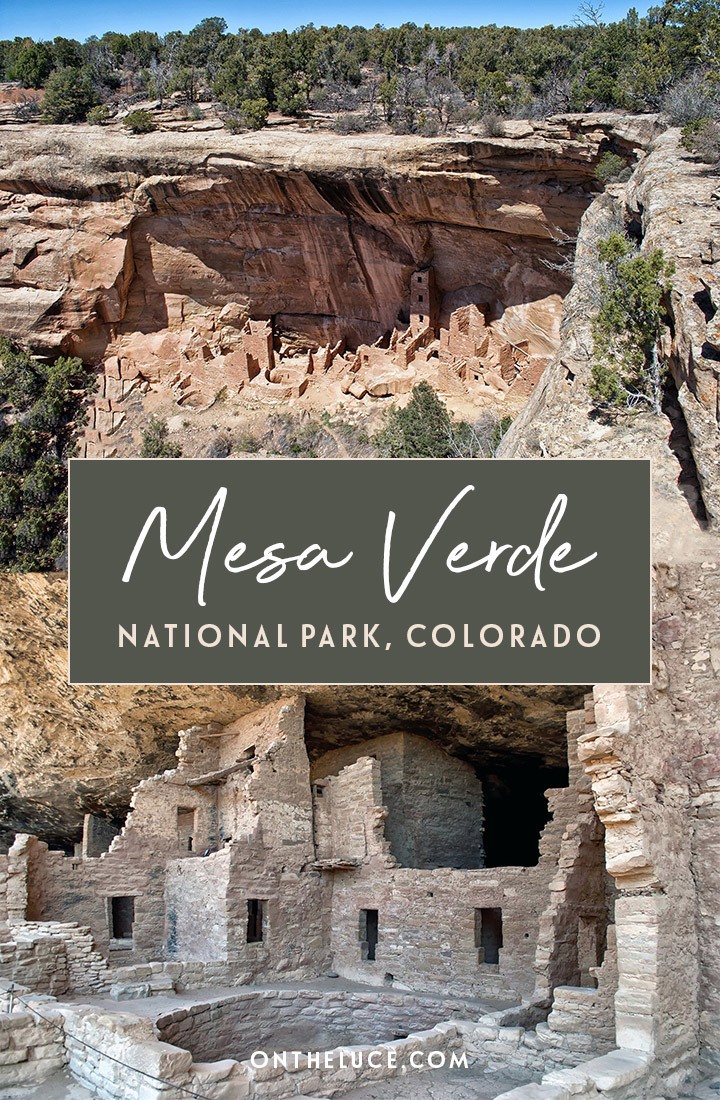