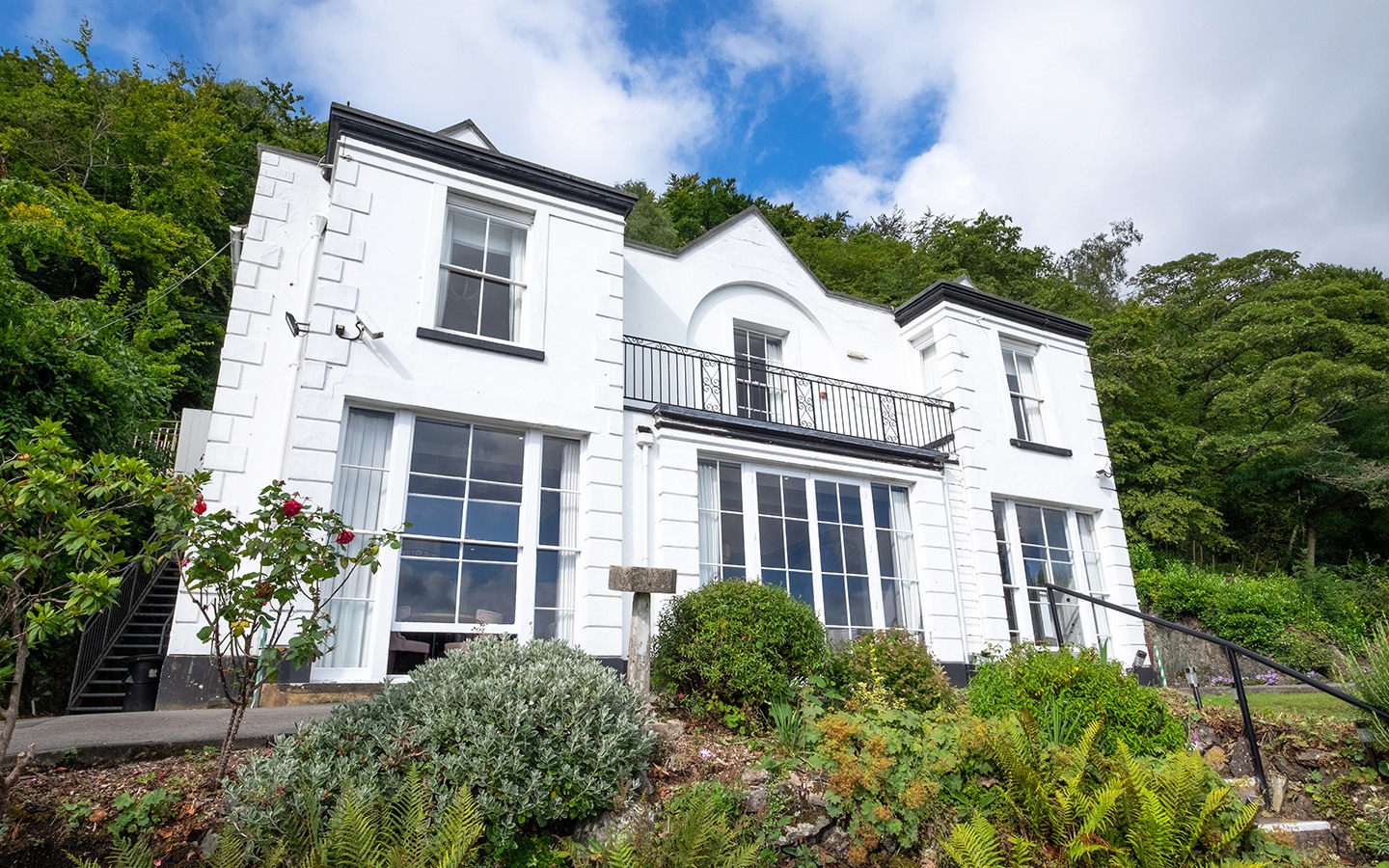 It’s an Area of Outstanding Natural Beauty with historic towns which inspired writers C.S. Lewis and J.R.R. Tolkien and spring water that’s a favourite with the Queen. So it’s a surprise that the Malvern Hills aren’t better known. This nine-mile-long range of hills lies on the Worcestershire/ Herefordshire border in the west of England. Their spa history and scenic views helps makes them perfect for an English countryside break, and their slightly under-the-radar status only adds to their charm. So I headed for the hills to see what the Malverns have to offer.

This trip was hosted by the Cottage in the Wood, but all views are my own. 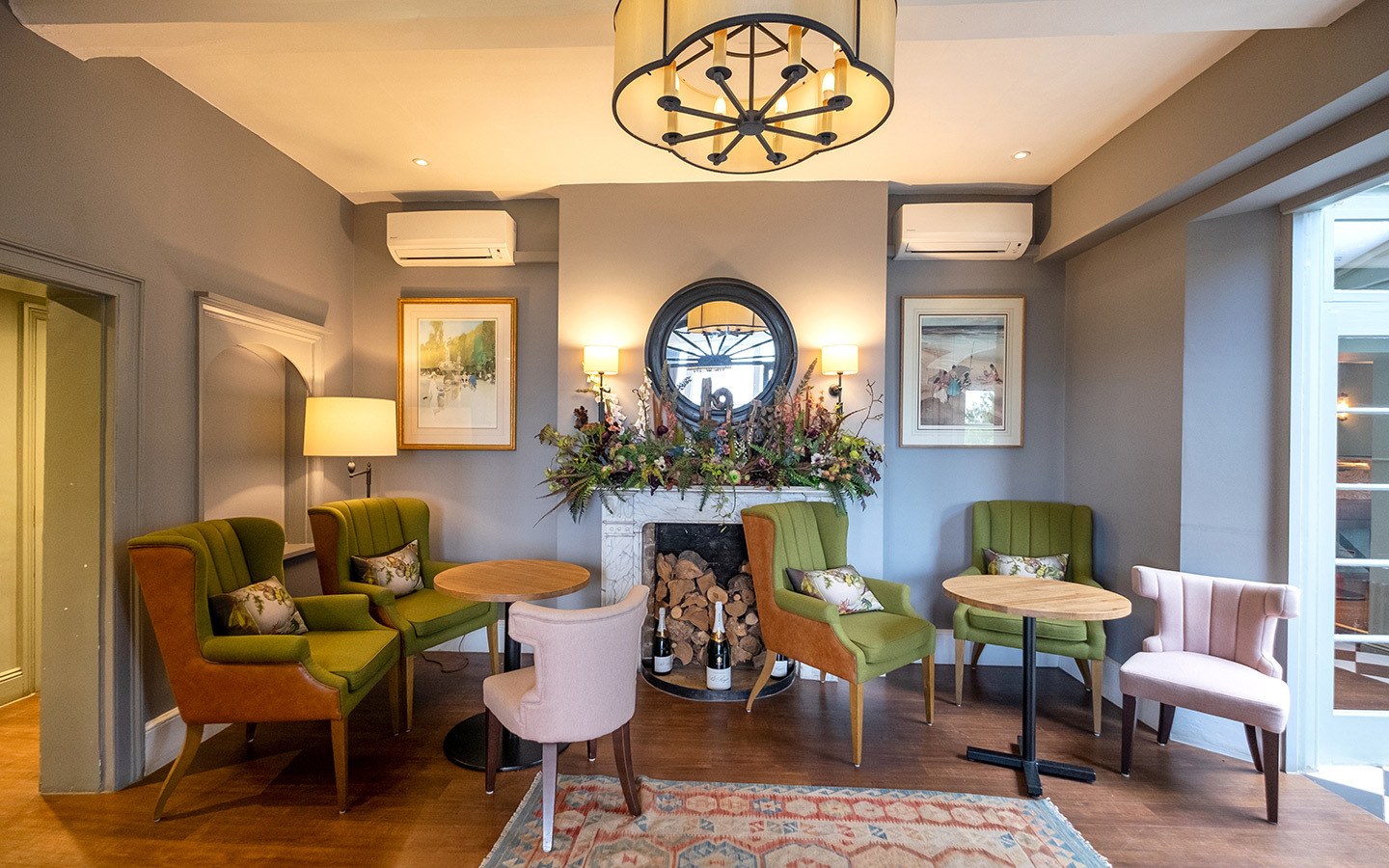 The foyer at the Cottage in the Wood

The Cottage in the Wood

There’s a slightly confusing array of Malverns – Great Malvern, West Malvern, Little Malvern, Malvern Link. But the base for my trip was Malvern Wells and the boutique hotel the Cottage in the Wood. The hotel’s been welcoming visitors for 100 years, and I was following in the footsteps of a real mix of guests, from Edward Elgar to Margaret Thatcher. It’s undergone a major revamp recently, combining traditional Georgian features and contemporary style.

A hairpin turn took us off the main road and I wound my way upwards before emerging on a hillside to a knockout view over the Cotswolds, Vale of Evesham and Severn Valley. The Cottage in the Wood’s elegant white main building is set among the trees, and there are two separate buildings where some of the 30 guest rooms are based – the Coach House and Beech Cottage. 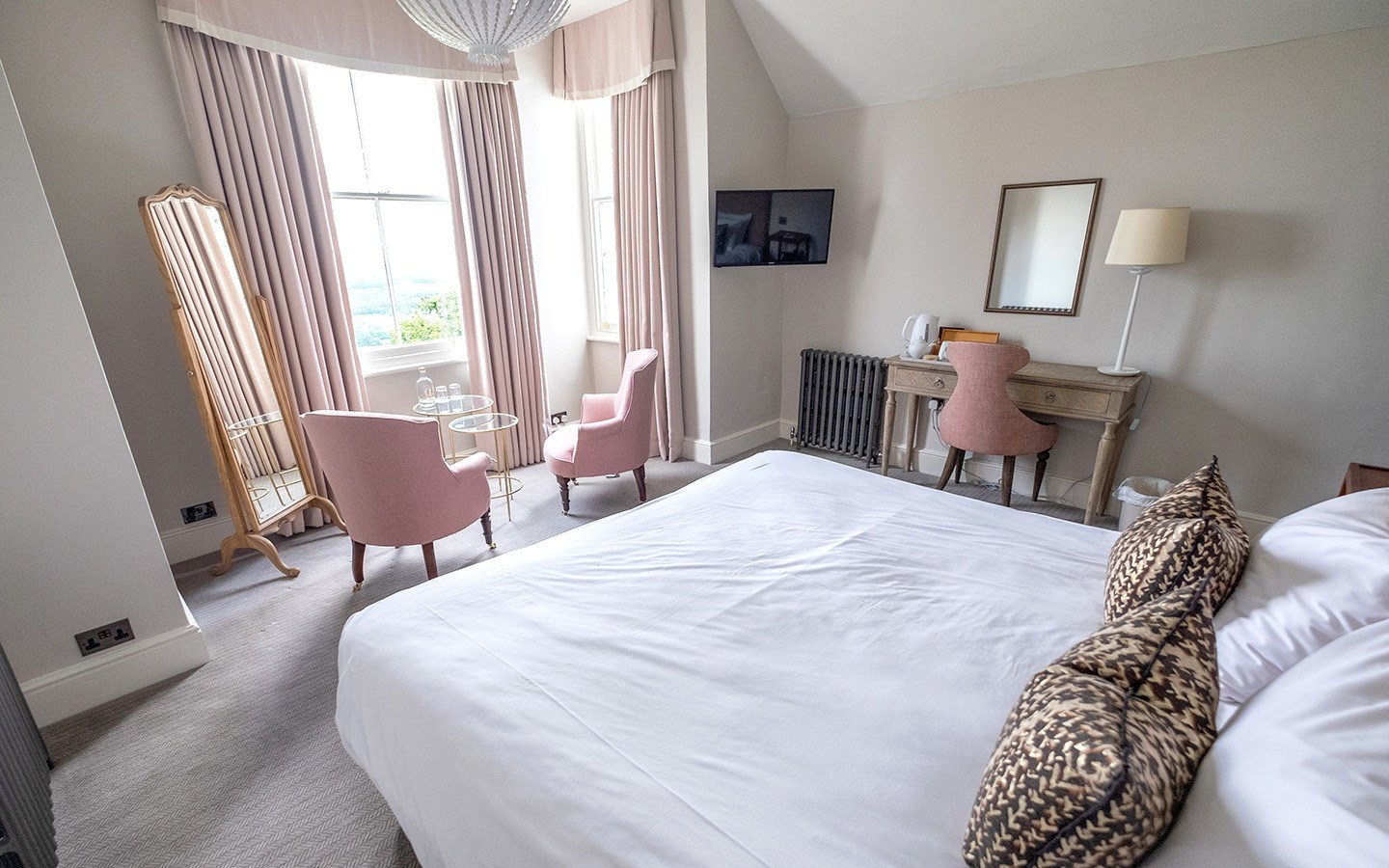 After checking in I headed upstairs to explore my room. There are five different room categories, from compact Cosy Doubles up to the spacious Best rooms which have panoramic views and king-sized or four-poster beds. Mine was beautifully decorated in a muted palette of greys and pinks and came with an en-suite bathroom with a roll-top bath and separate shower. Rooms have recently been refurbished and include vintage furniture and artworks.

There’s a real country house feel about the hotel, and I could imagine curling up in front of a log fire on a winter night, or watching sunset from the terrace in the summer. Being a bit too warm for one and too cold for the other, I settled for drinks in the bar instead. It’s decorated in deep jewel colours with a cracking cocktail list. Never able to resist a travel-themed cocktail, I went for a Raspberry Air Mail (rum, Crème de Framboise, Champagne, lime and honey). 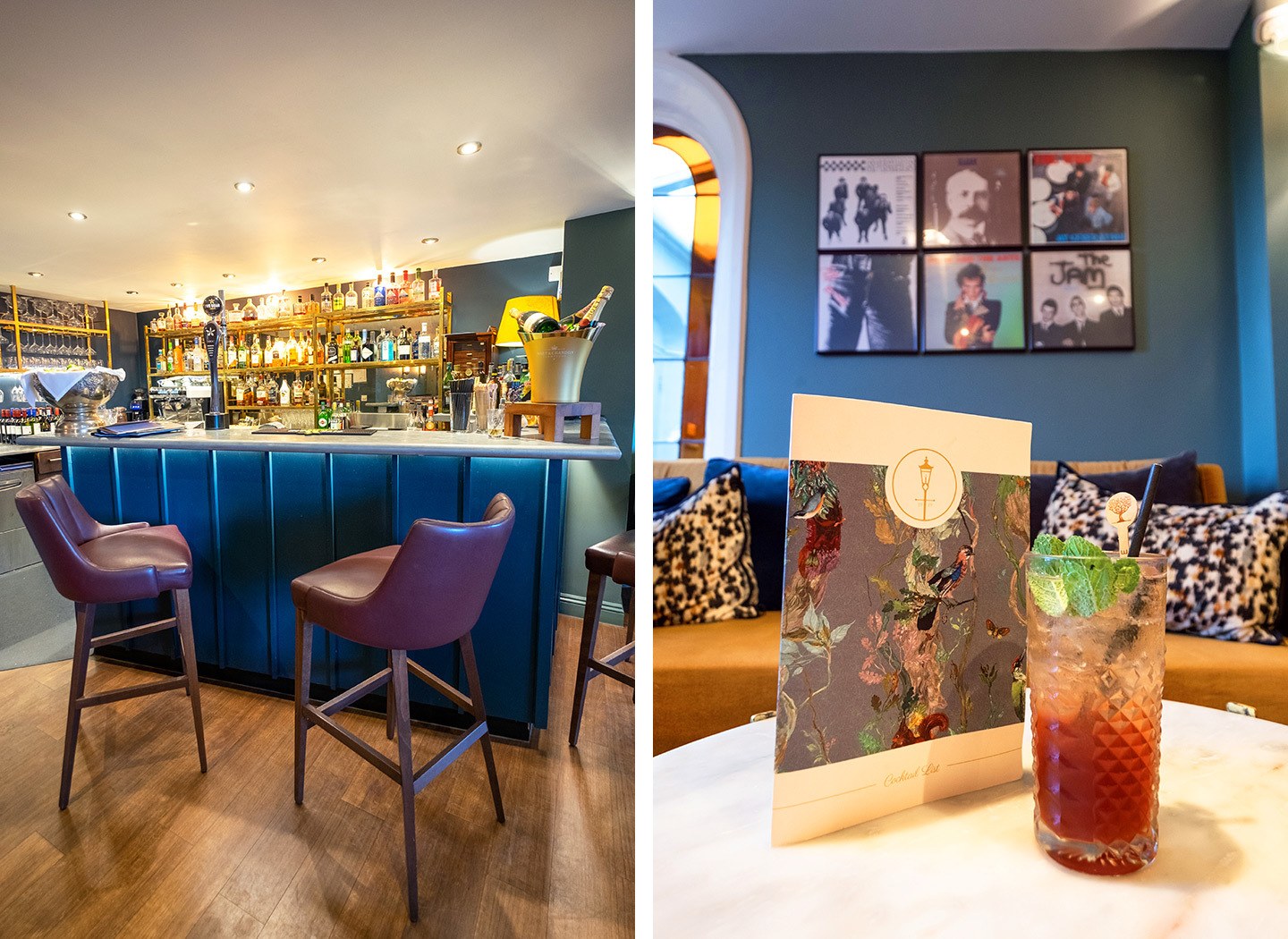 Drinks at the bar

Dinner was at the hotel’s 1919 restaurant (named after the year it opened as a tea room). Hotel restaurants can be a bit hit and miss so it was a good sign that the dining room played host to locals coming in for a special meal as well as guests, and it’s been awarded two AA Rosettes. The décor is calm and relaxing with the fabulous views taking centre stage. Even without having the French windows open, the floor-to-ceiling windows along one wall bring the outside in.

The menu is updated frequently and is based around modern British cuisine, with a few exotic ingredients like nduja and dashi thrown in. They’re happy to adapt dishes for gluten- and dairy-free diets and have a vegan menu too. The ingredients are seasonal and local – some very local as they have their own kitchen garden – and really shine through in the unfussy style. Meltingly tender beef and a perfectly poached egg with asparagus were some of my highlights. 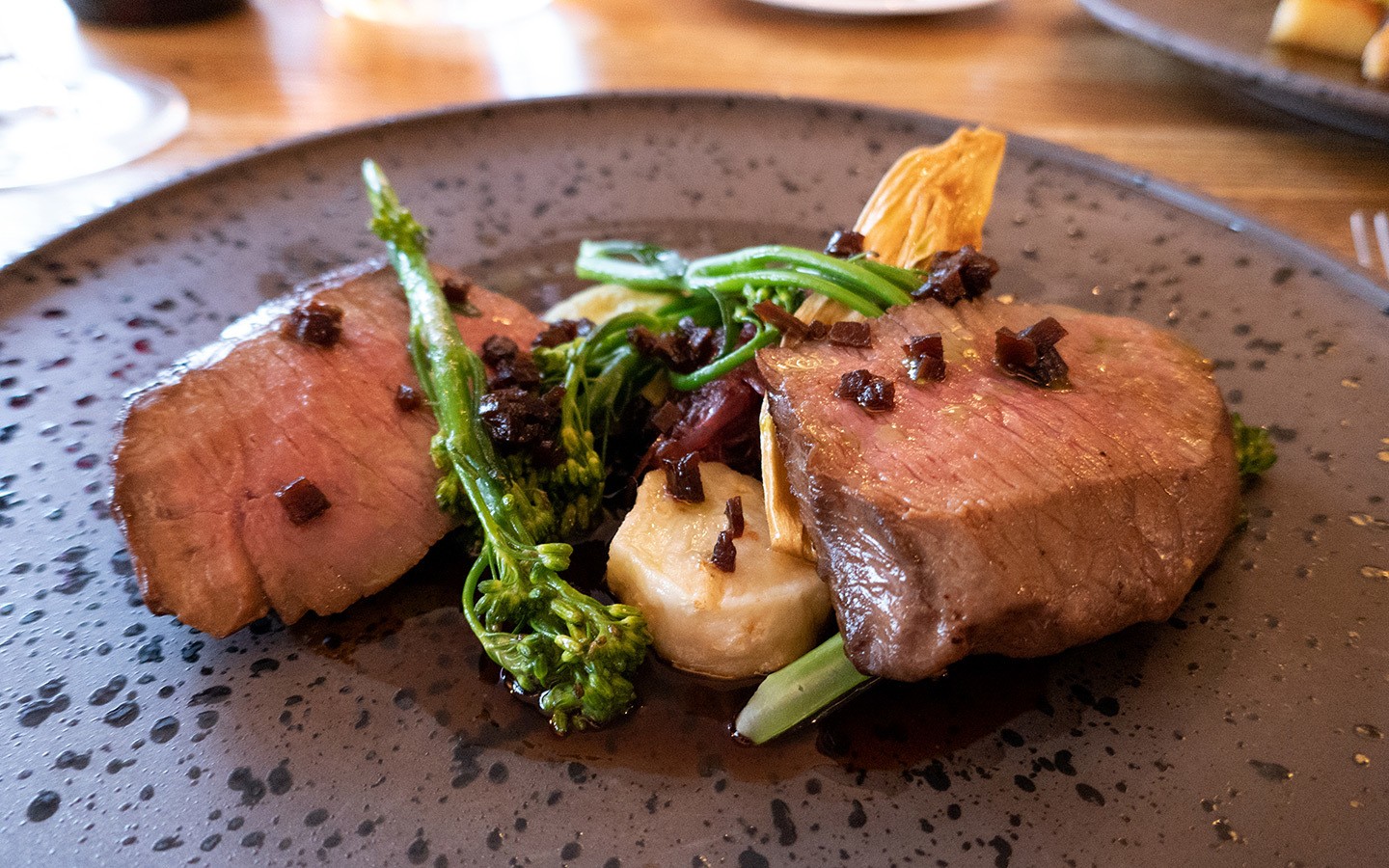 Being out in the countryside made for an incredibly peaceful night, and the Hypnos mattresses and luxurious bedding helped. After a good night’s sleep, breakfast was served in the restaurant. There’s a continental selection with homemade granola, yoghurt and fruit, plus cooked options like avocado and poached egg or wild mushrooms on toast, as well as the usual Full English.

The Cottage in the Wood is one of those places where you can’t help come away feeling relaxed. But tempting as it was to laze away a couple of days eating, drinking and snoozing, there’s a lot to see in the Malvern Hills, so I reluctantly dragged myself away. This Area of Outstanding Natural Beauty’s scenic good looks are big part of its attraction, but there are historic houses, heritage sites and local food and drink producers waiting to be discovered too. 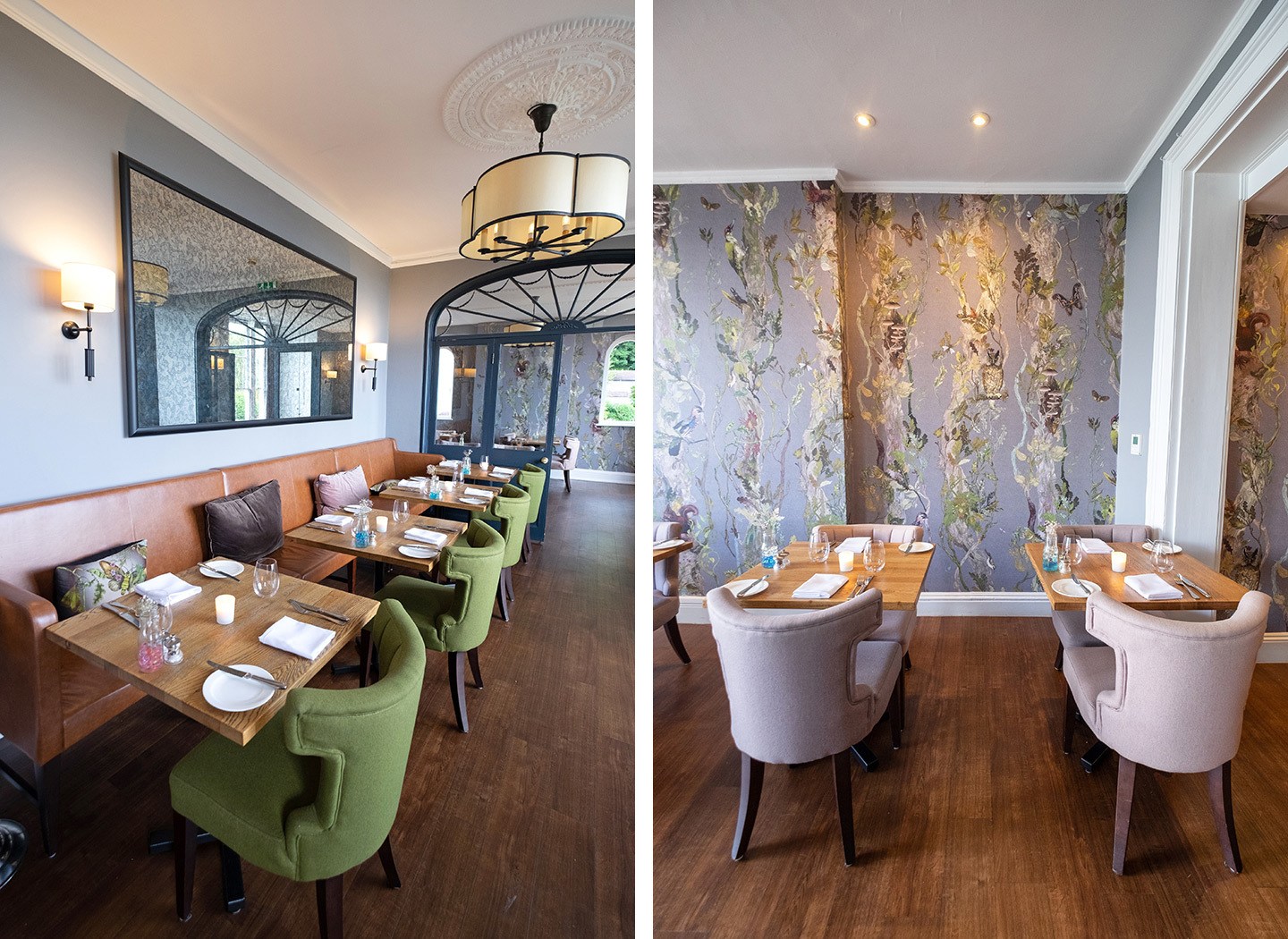 The best way to see the Malvern Hills is on foot, and there are lots of walking trails to choose from – including one starting right from the Cottage in the Wood. A circular 45-minute walk takes you up to the top of the hill behind the hotel for an even better view. There’s a map in your room to show you the way (walking boots are a good idea though as it can get muddy).

From the top of the hill you can walk the extra 425 metres to Worcestershire Beacon – the highest point in the Malverns. Another popular walking stop is British Camp, a couple of miles away from the hotel. This is the site of the Herefordshire Beacon on the border between the two counties, as well as being an Iron Age hill fort. Malvern Hills AONB have a leaflet with tons of other walking and cycling ideas, and copies are available at the Cottage in the Wood. 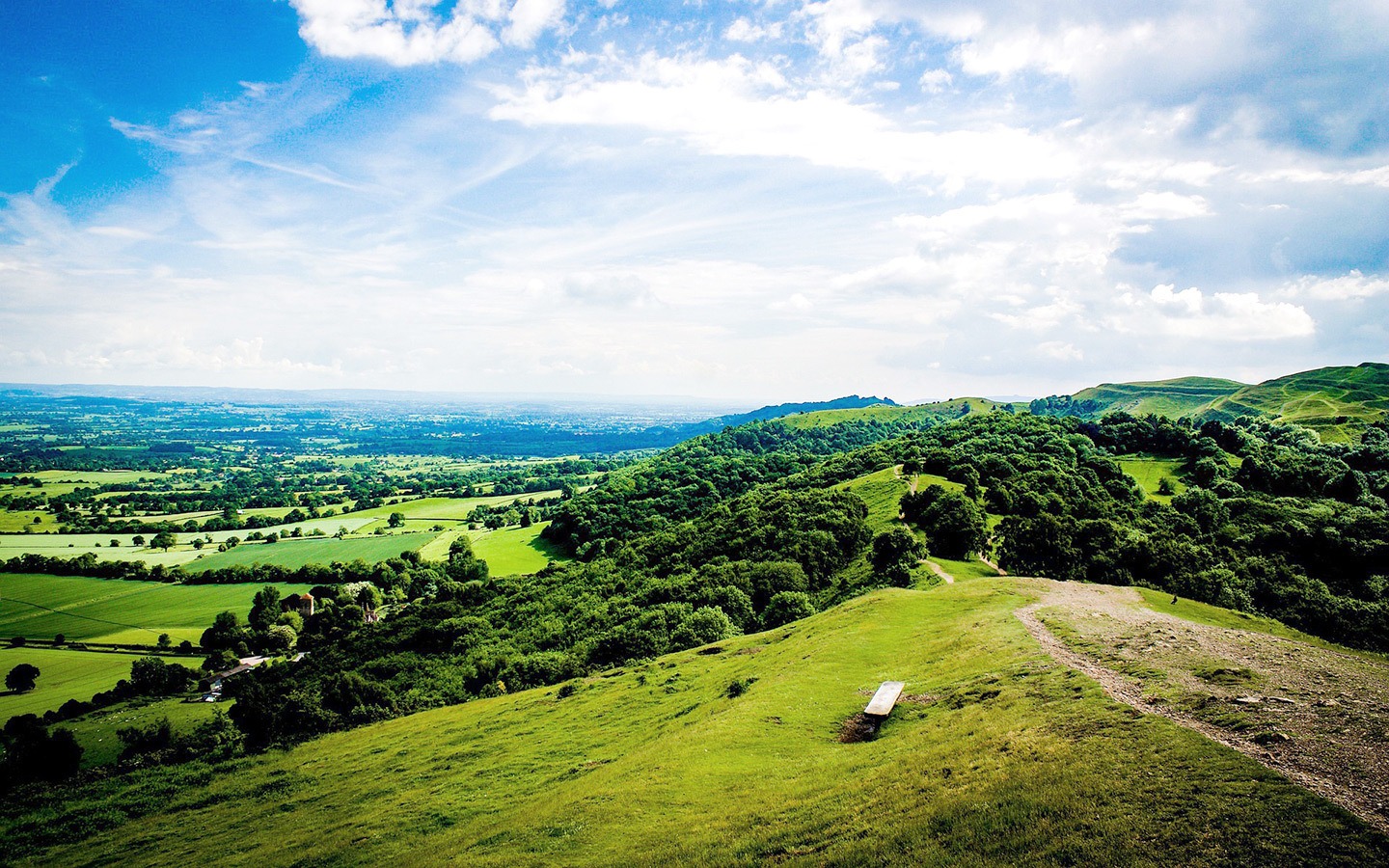 The Malvern Hills are famous for their water, and there are over 70 natural springs scattered across them. In the 18th century, Malvern became the spa holiday destination of choice for Victorians who believed its waters could cure anything from gout to blindness. Its well-known visitors included Florence Nightingale, Lord Tennyson and Charles Darwin, whose daughter was treated at the spa and later died and is buried in Malvern (hopefully not as a result!).

If it’s good enough for at least three Queens (Elizabeths I and II both drank it and Queen Victoria apparently refused to travel without it), then it’s good enough for me. And you can still fill up a bottle at the local springs. There’s one at Holy Well in Malvern Wells, just a few minutes from the hotel. This is allegedly the site of the oldest bottling plant in the world – spring water was first bottled there in 1622 and production restarted about 10 years ago after a break. 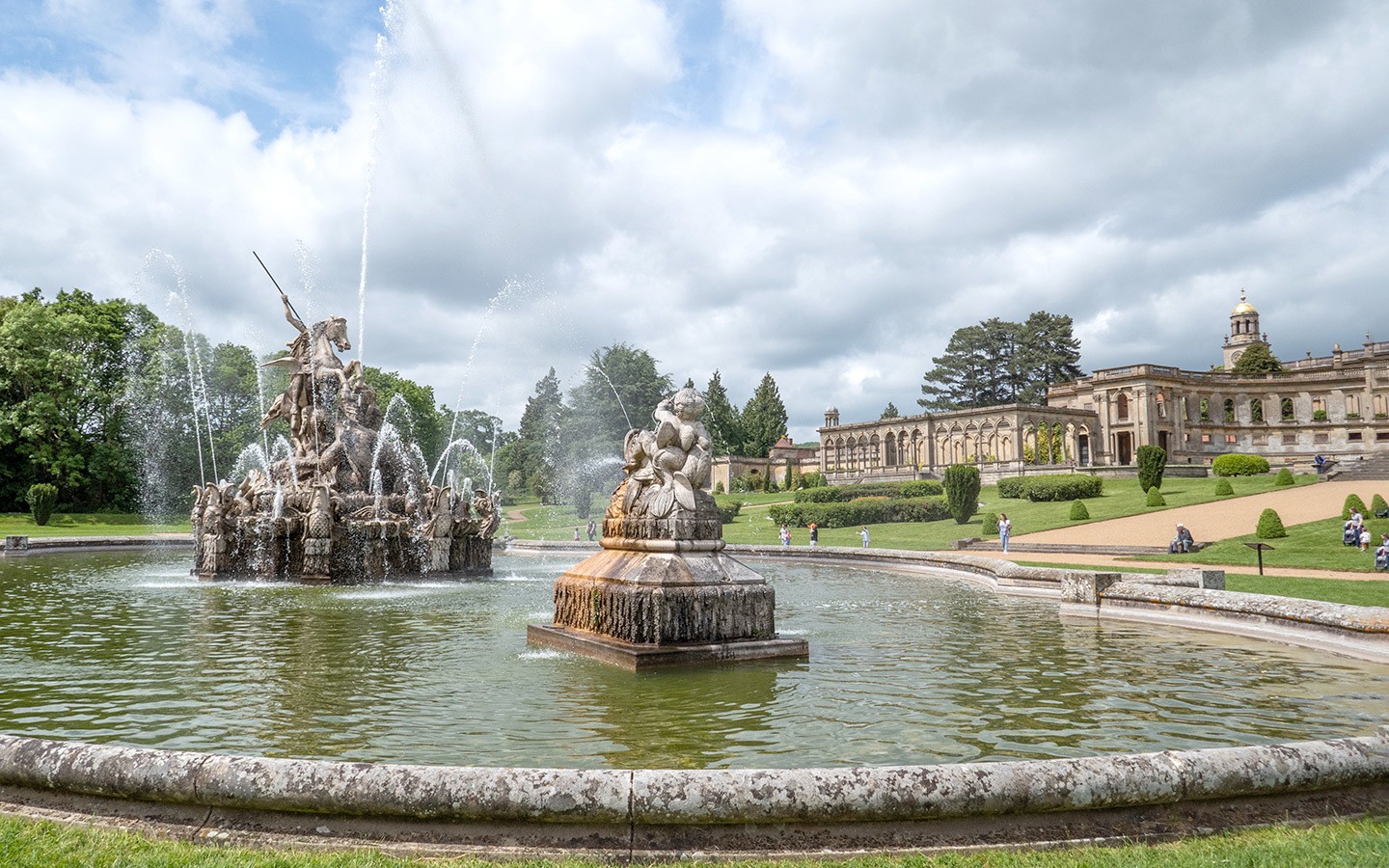 Or if you prefer your drinks a bit stronger, there’s both a vineyard and a brewery within easy reach of the Cottage in the Wood. Lovell’s Vineyard produces a range of award-winning whites and sparkling wines, named after local boy Edward Elgar who’s buried in St Wulstans Church in Little Malvern. You can drop in for a tour and tasting (Wednesdays to Fridays, 11am–4pm). Or pick up a beer or two at the Friday Beer Company brewery in Malvern Link.

There are also plenty of historic sites to explore in the Malverns, including the pretty Victoria spa town of Malvern with its antiques shops, bookstores and gas lamps as well as riverside Upton upon Severn. You’ve also got Elgar’s birthplace, the country house and secret wartime airbase Croome Court, the atmospheric ruined Witley Court and lavish Eastnor Castle all within easy reach, and car lovers can take a tour of the Morgan Motor Company’s factory. 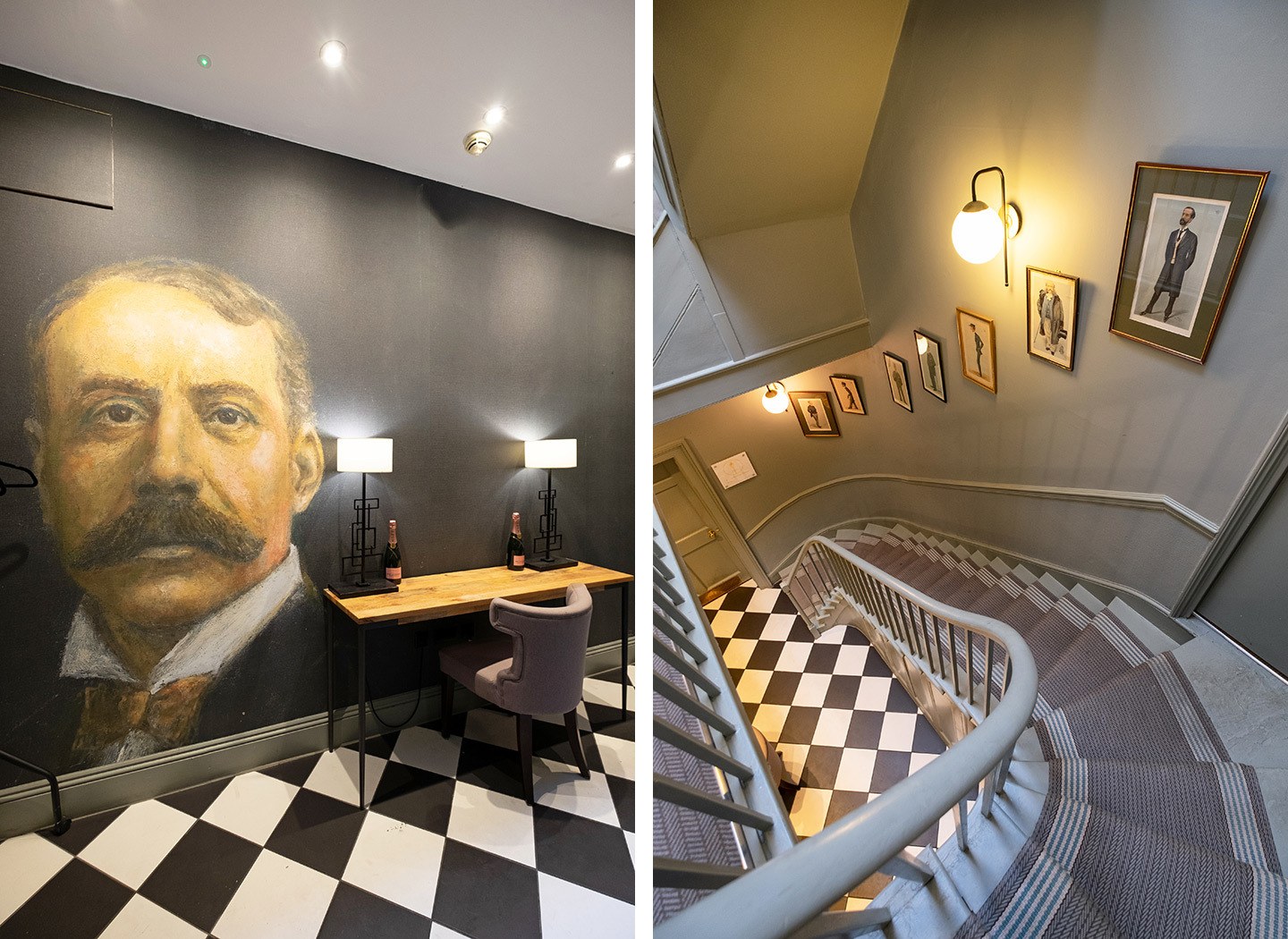 The Cottage in the Wood

The Cottage in the Wood is located in Malvern Wells, around 12 miles south-west of Worcester. The Malvern Hills are easy to reach – under 90 minutes’ drive from Bristol, Birmingham or Oxford. It’s easiest to explore by car, but there are train stations in Great Malvern and Malvern Link with direct connections to Birmingham, Bristol, Oxford and London.

Rooms at the Cottage in the Wood start from £99 per night for a Cosy Double to £199 for one of their Best rooms. They also have various special offer packages, like a Sunday Slumber package and discounts on dinner, bed and breakfast – check their website for details. 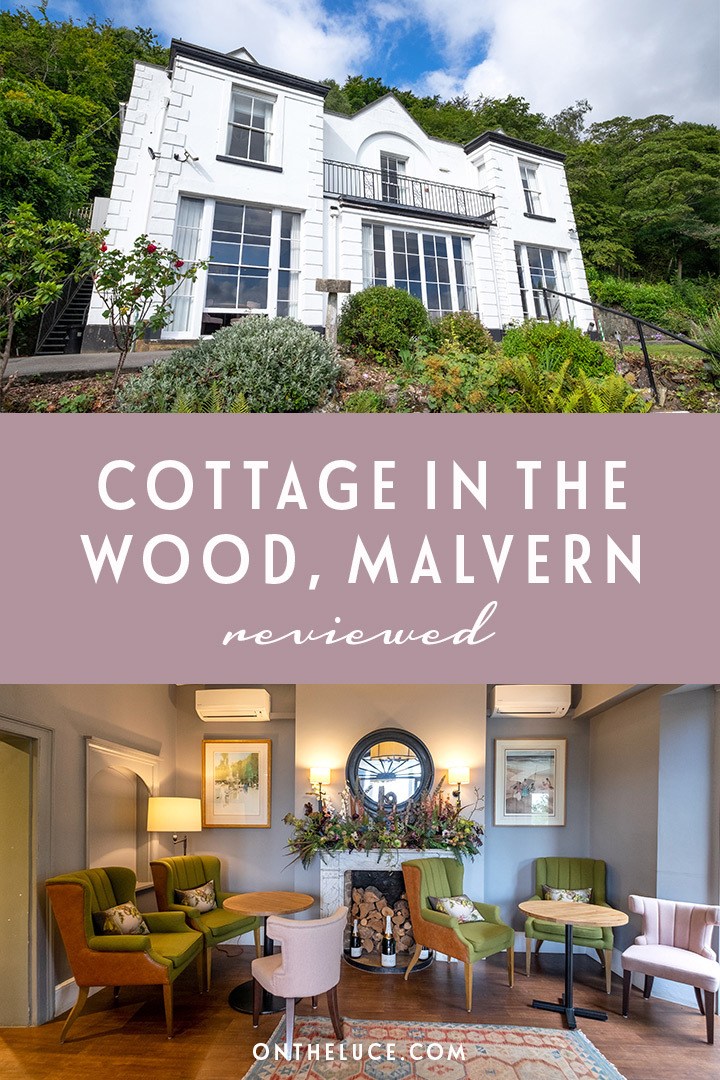 If that's the cottage I'd like to see the 'big house'! It looks absolutely perfect for a relaxing weekend away.

Yes that's true, I wonder if there was a mansion there once!

This looks like a lovely boutique hotel. I like the decor of the rooms - simple but stylish. I've never visited the Malverns - I may have passed through, but it sounds like a lovely part of the country to visit.

Yes it's a lovely part of the world – I must get back and do some of the walks next time.

What a lovely hotel and places to explore nearby. Looks like a refreshing and peaceful getaway!

Thanks yes it was so relaxing!

You're right about it being under the radar, I know nothing about the Malverns. But it sounds fabulous and this hotel would fit me perfectly. And that beef has me salivating!! My planned evening meal is looking less appealing now.

Haha yes it was so tasty, and the Malverns are well worth a trip!

Amazing!! Thank you for sharing!!