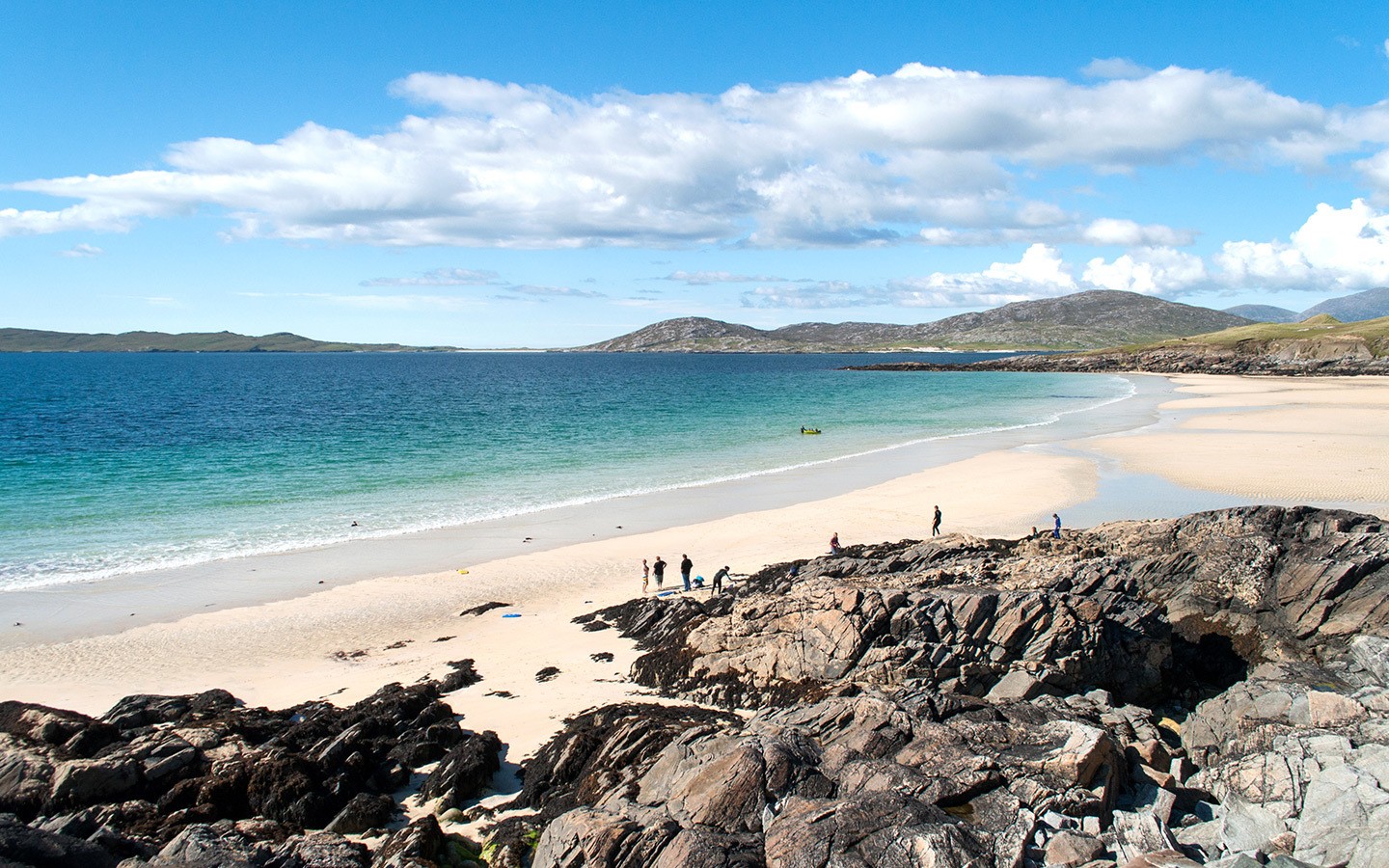 Scotland’s islands have to be one of Britain’s best-kept secrets. I’d heard tales of the stunning beaches, breathtaking landscapes and unique culture you can find in the far north of Scotland, and couldn’t wait to see those postcard-worthy views for myself. I just needed some sunshine to make it perfect – and the Hebridean Isles of Lewis and Harris couldn’t have put on a better show for my first Scottish island trip. Technically one landmass but split into two islands, Lewis and Harris lie at the top of the Outer Hebrides off Scotland’s west coast. But why should you visit Lewis and Harris? Here are nine great reasons to add them to your Scotland wishlist.

Read more: A journey through history on the Isle of Lewis, Outer Hebrides 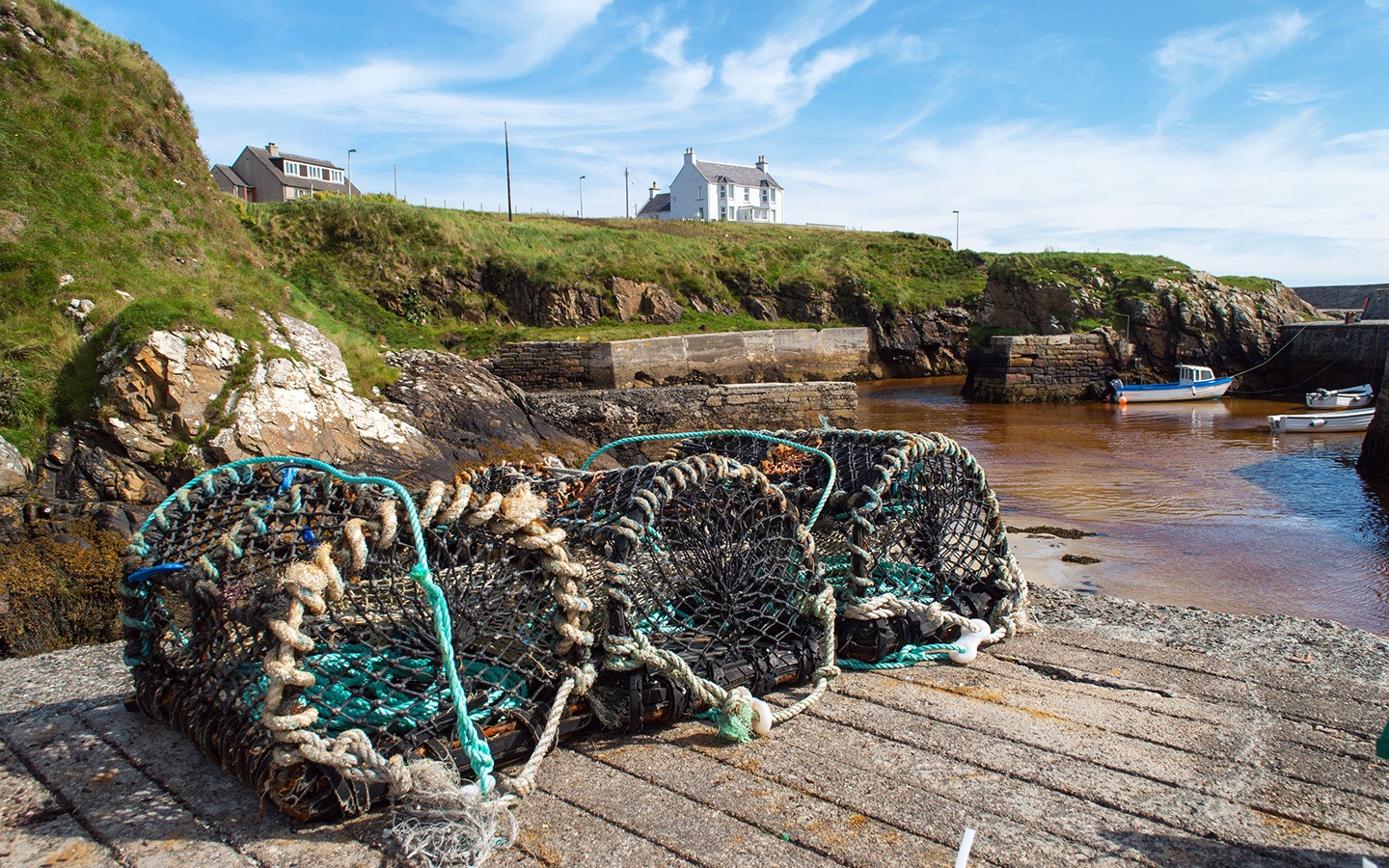 The harbour in the Port of Ness

It’s not hard to see why the beaches on Harris’ west coast top so many ‘best beach in the world’ lists. Their white sands and clear turquoise waters could easily give islands in the Caribbean or South Pacific a run for their money (until you dip your toes in – the water temperatures are definitely Scottish!). Stunning Luskentyre is the star of the show but our other favourites included Scarista and Seilebost. Both Lewis and Harris are dotted with a mix of sheltered coves, sandy dunes and rocky bays, so you’ll have no problem finding your perfect beach. 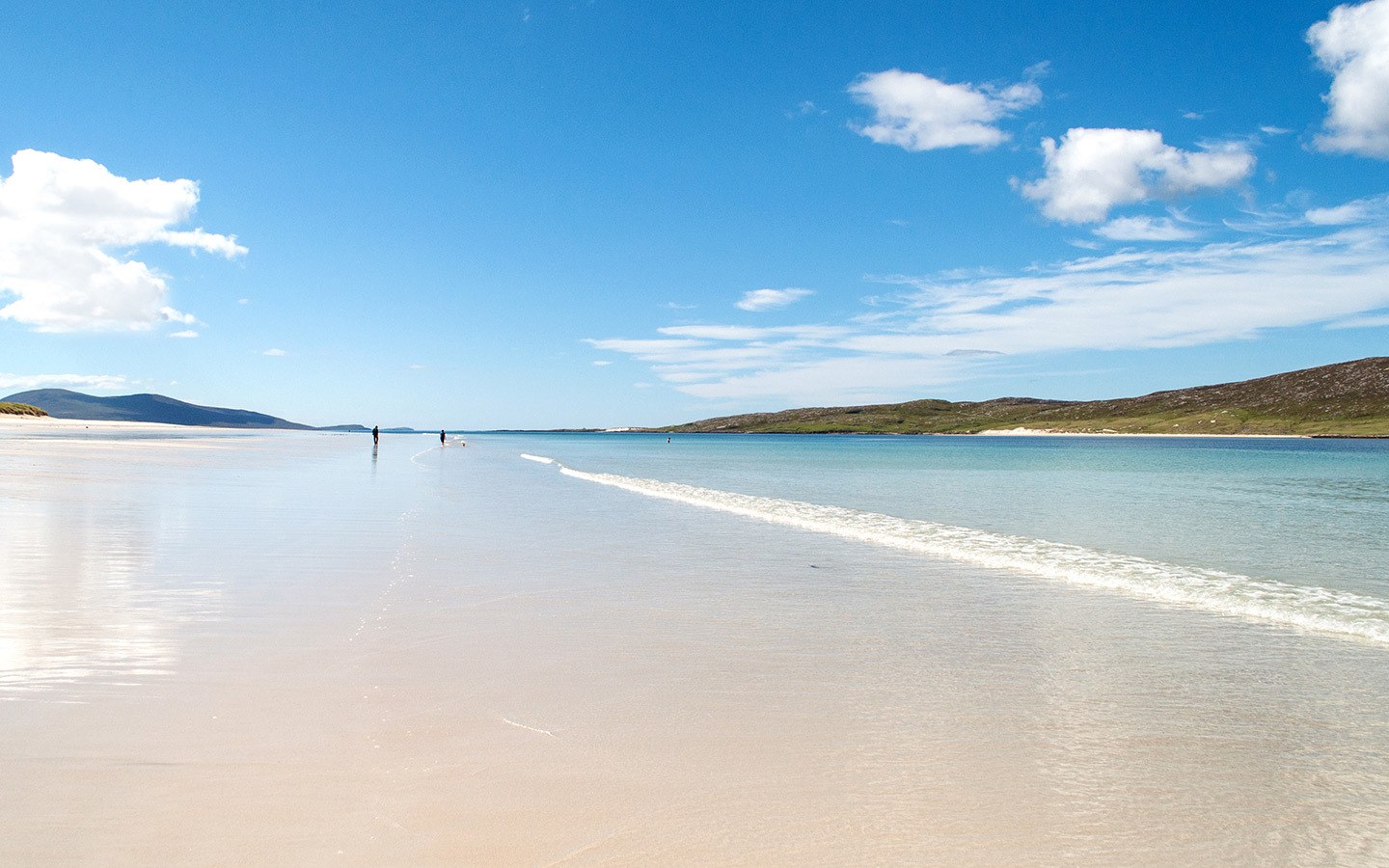 If you’re interested in history, you’ll be fascinated by the Hebrides. The islands were one of the first places to be settled in the British Isles around 8500 BC and plenty of remnants of their past still remain. A drive along the west coast of the Isle of Lewis is a tour through the last few thousand years. There are the Neolithic standing stones at Callanish – older and more impressive than Stonehenge – the Iron Age Dun Carloway Broch, a Norse mill and traditional 19th-century blackhouse villages at Arnol and Gearrannan, one of which you can even stay in. 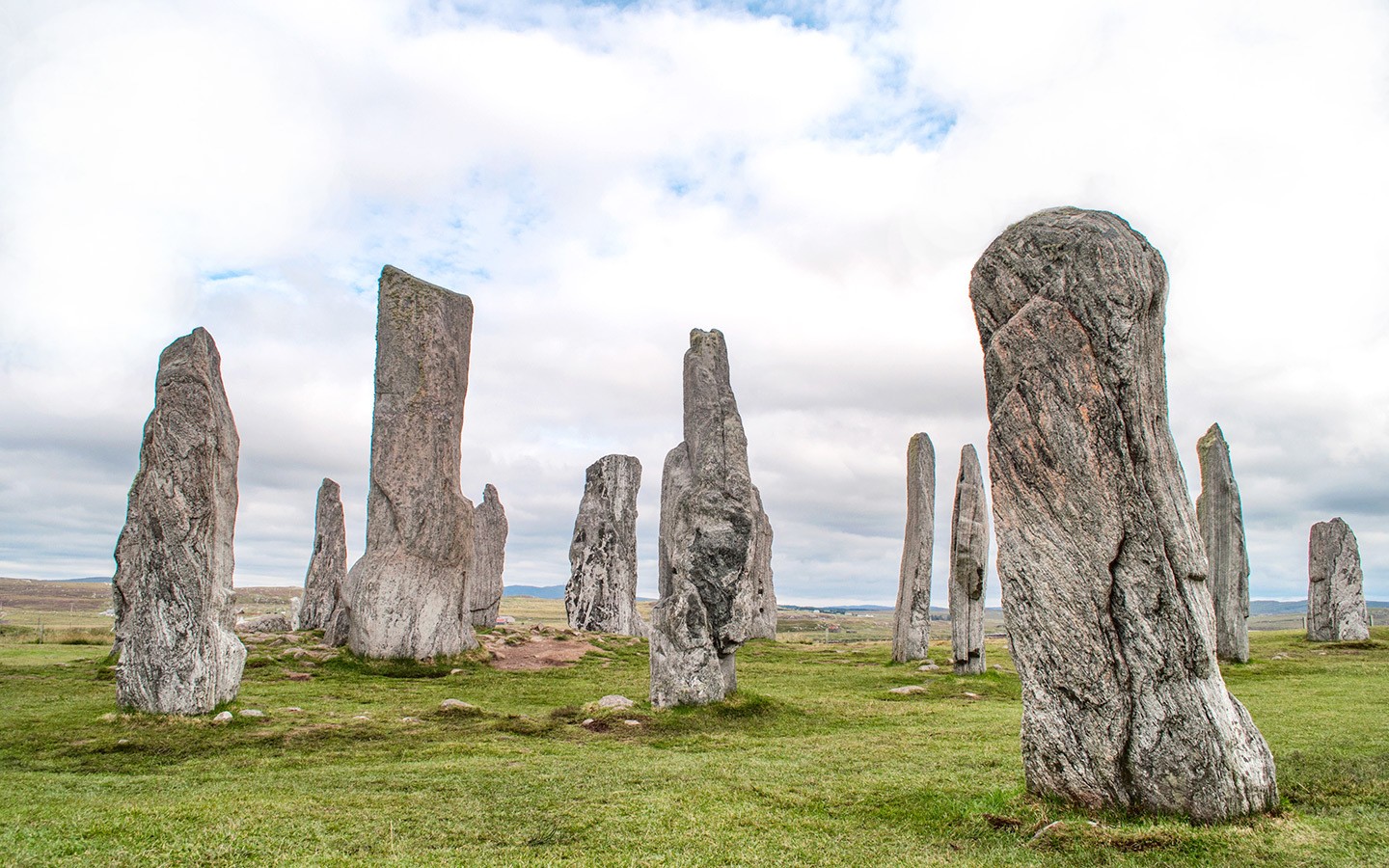 At around 840 square miles in size, Lewis and Harris pack a lot of different landscapes into a small area. Lewis is mostly flat, with miles of peaty moorlands stretching across the centre of the island which reminded me of Iceland. Then around the coast you’ve got sandy beaches and rocky headlands in the east and the deep waters of Loch Suaineabhal. But follow the road down to Harris and the landscape changes again, winding its way up and down hills with panoramic views down to lochs and coastal inlets. Be prepared to make a lot of photo stops everywhere you go. 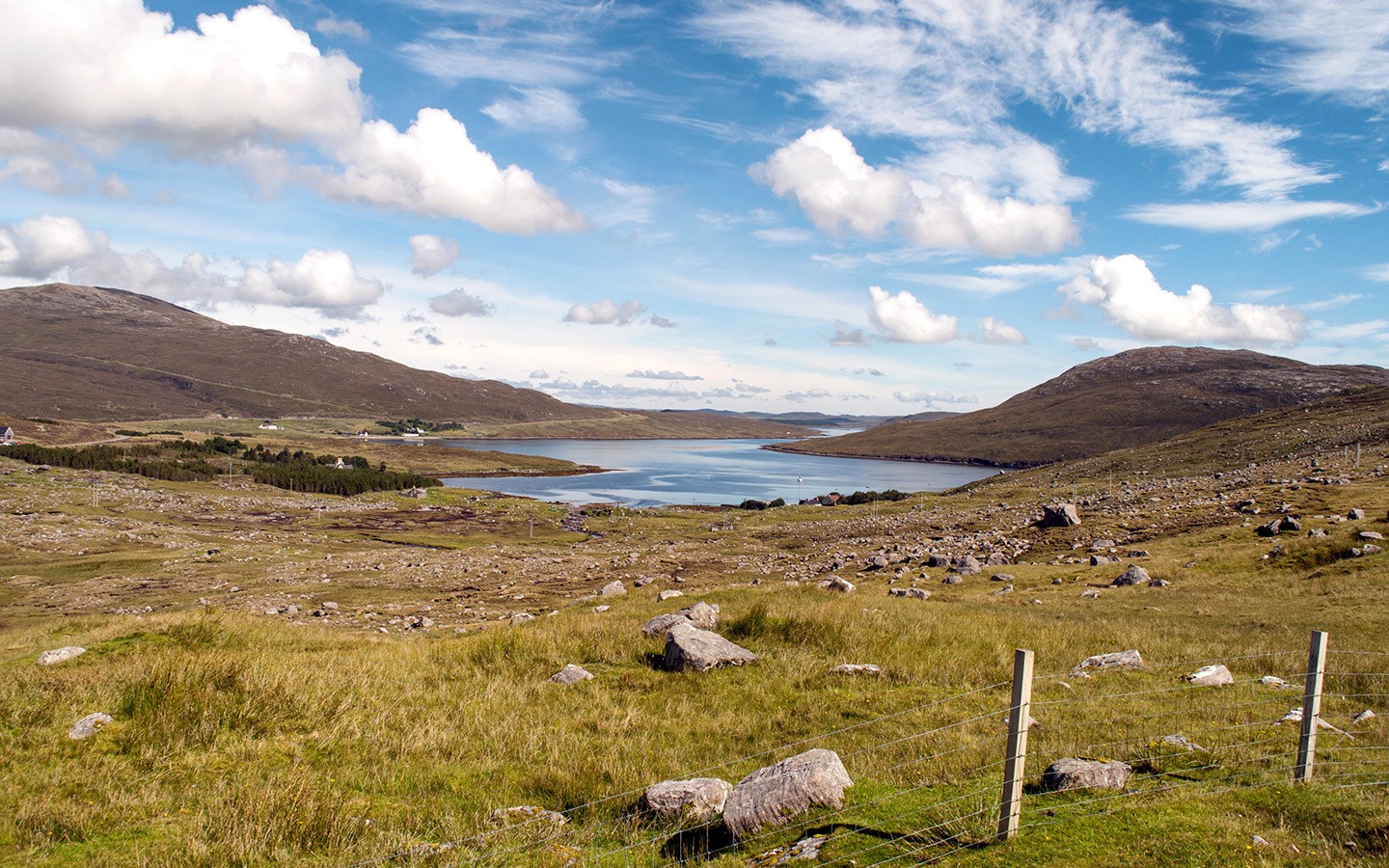 On the road to the Isle of Harris

4. The food and drink

Seasonal, local produce are foodie buzzwords right now, but Lewis and Harris are old hands at this. They have an impressive selection of places to eat and drink, as well as lots of small-scale local producers. We followed the Eat Drink Hebrides Trail around the islands, which lists Stornoway Black Pudding, peat-smoked scallops and kippers from the Stornoway Smokhouse, cheese, tea and Hebridean Mustard among their local favourites. And don’t miss a drop of Harris Gin or Abhainn Dearg whisky – both run tours and tastings from their distilleries. 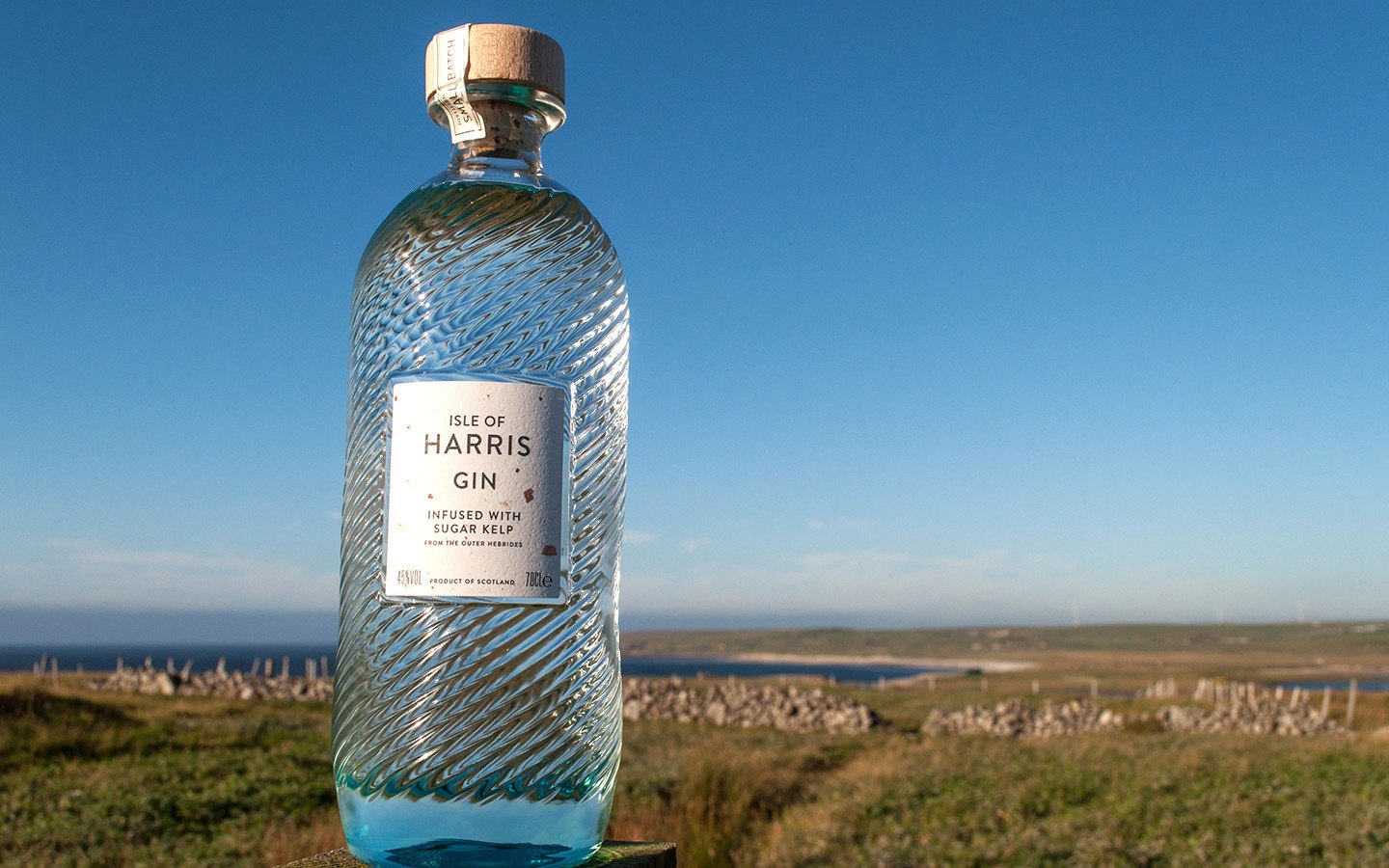 My bottle of Harris Gin

The islands hold their traditions close, like the Gaelic language which is still spoken and used on signs around the Hebrides. But it’s not a place that’s just looking to the past, and traditions are always evolving. Alongside traditional music you can see modern art, film and photography on show in the An Lanntair arts centre in Stornoway. And as for those ‘everything’s closed on Sundays for church’ stereotypes – although not as much is open as on the mainland, we had no trouble filling up the car, going out for lunch and catching our flight home on a Sunday. 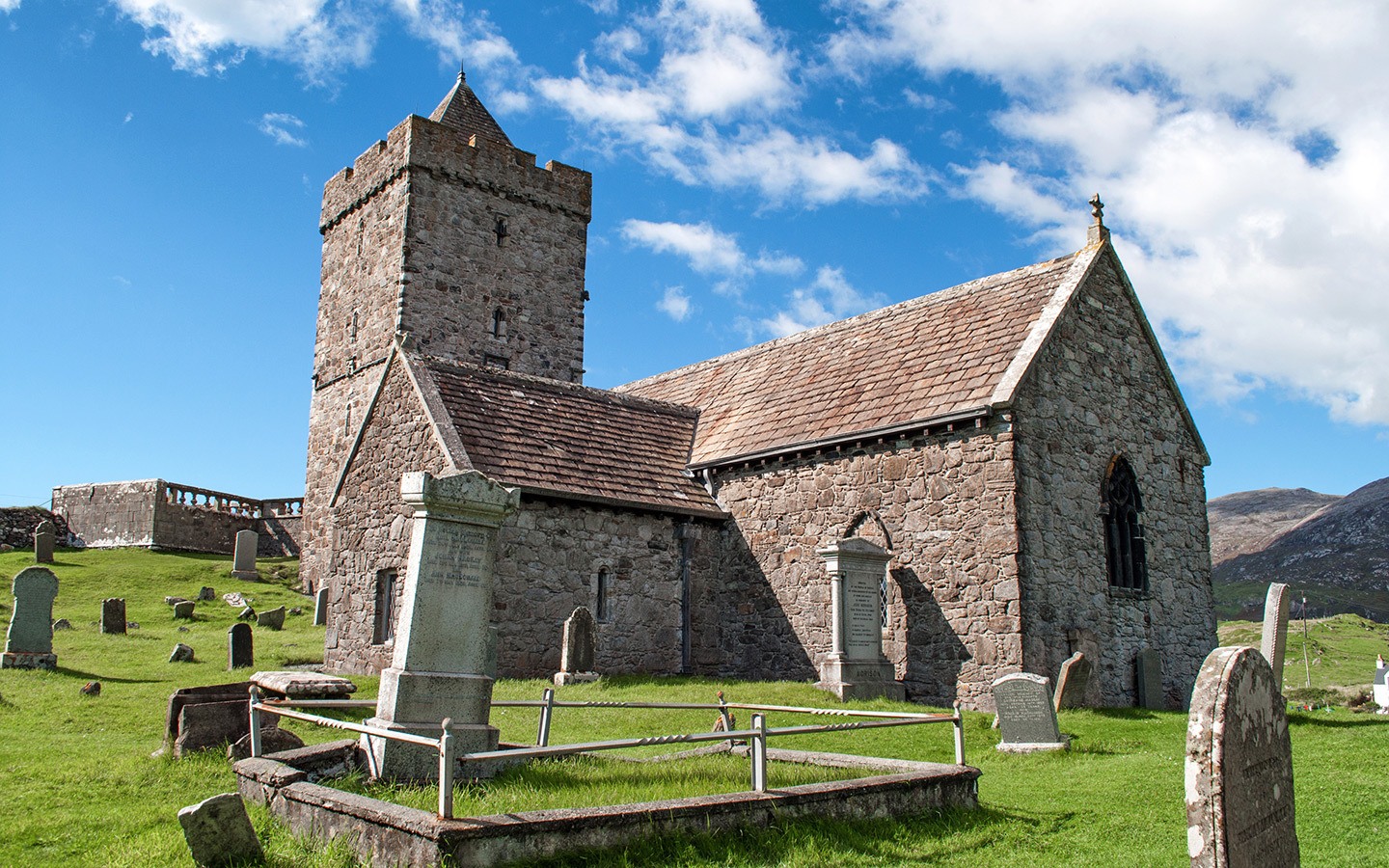 Much as I love a sandy beach, there’s something entrancing about watching waves crashing against the rocks. And the Butt of Lewis at the north-east tip of Lewis has some serious cliffs, stretching up to 80 feet high. You can get right to the edge so it’s not one for vertigo sufferers, but the views are stunning. The area gets winds of 100 mph and at one point the Guinness Book of Records named it Britain’s windiest spot – so you can imagine the size of the waves! 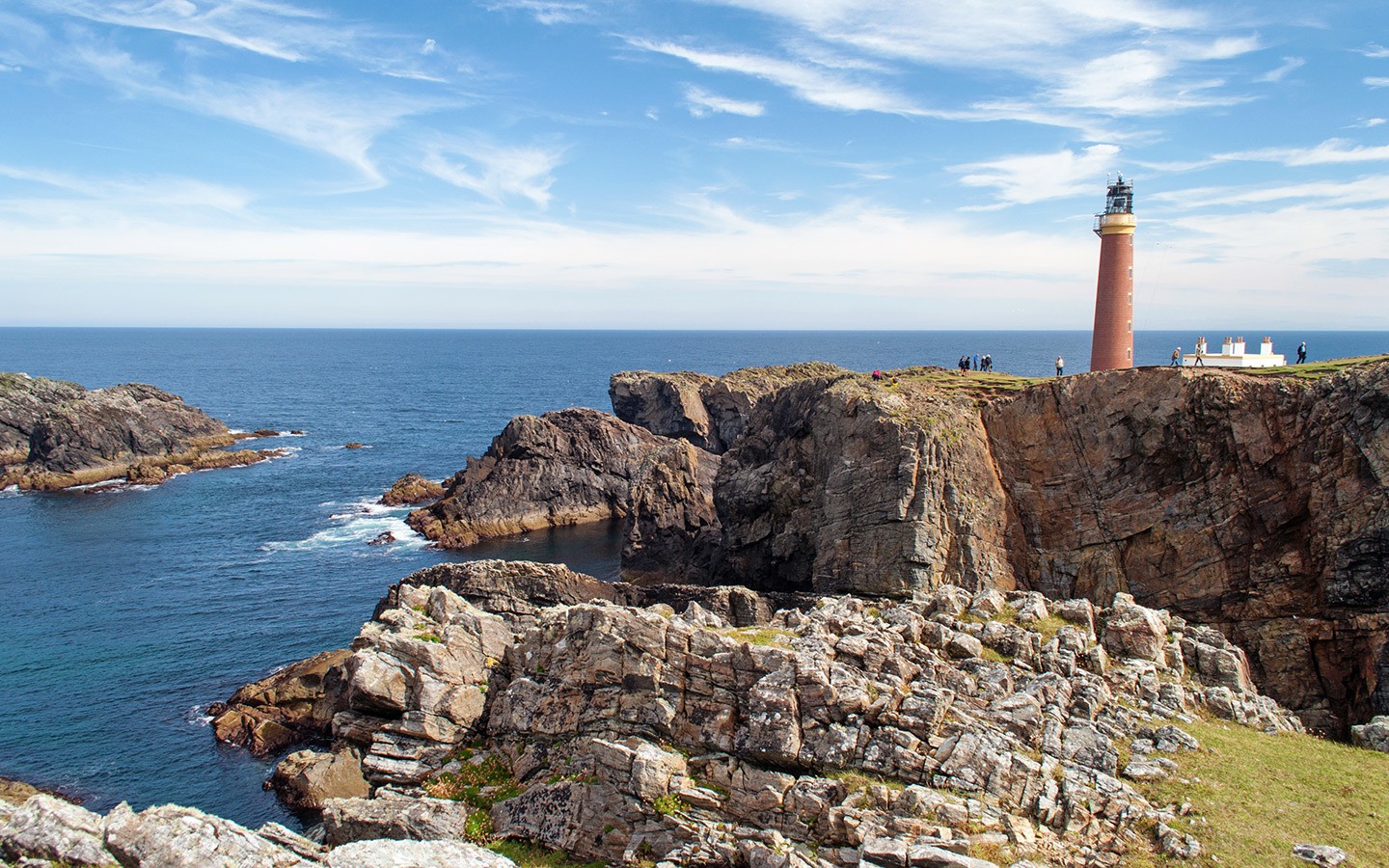 Looking calm at the Butt of Lewis

You can’t have a Scottish island post without at least one hairy Highland coo featuring – and our house came with a few of these photogenic guys as neighbours. As well as cows, you can see wildlife like red deer, eagles and otters around the islands, plus seals, dolphins and whales off the coast. Our human neighbours were just as friendly too. There’s a real sense of community around the islands. The Islanders we met were all  justifiably proud of their home and wanted to share tips of their favourite places to visit to help make our trip special. 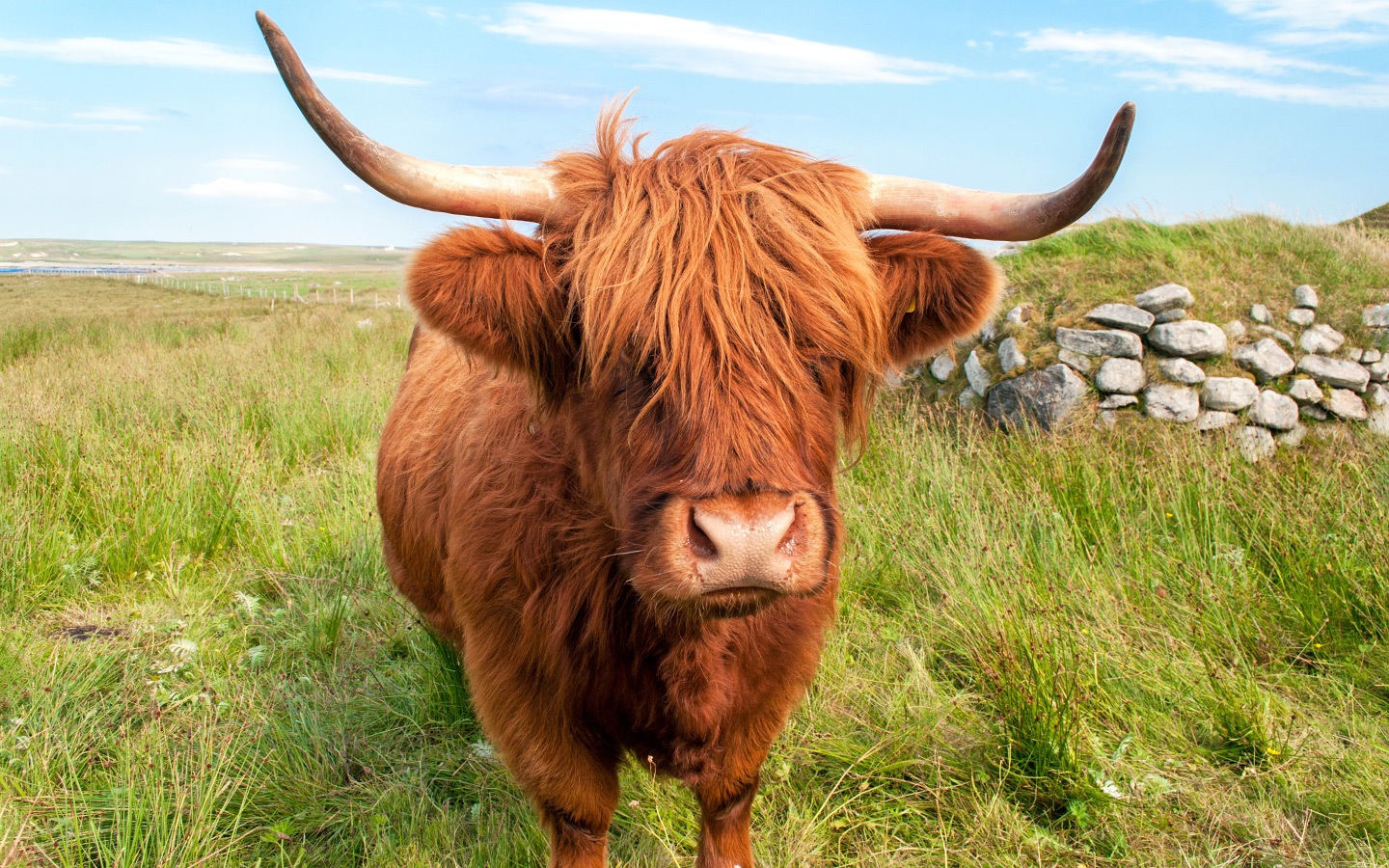 Something about the scenery when you visit Lewis and Harris makes you want to pick up a paintbrush (even if you’re as hopeless as me), so it’s no surprise many talented artists and craftspeople have made their home on the islands. Harris Tweed is best known, and I couldn’t resist buying one of the beautiful jackets, which have to be woven by hand at home in the Hebrides to earn the name. But you’ll also find painters, photographers, jewellers, potters, knitters and writers – with author Peter May setting a whole trilogy of books on Lewis. 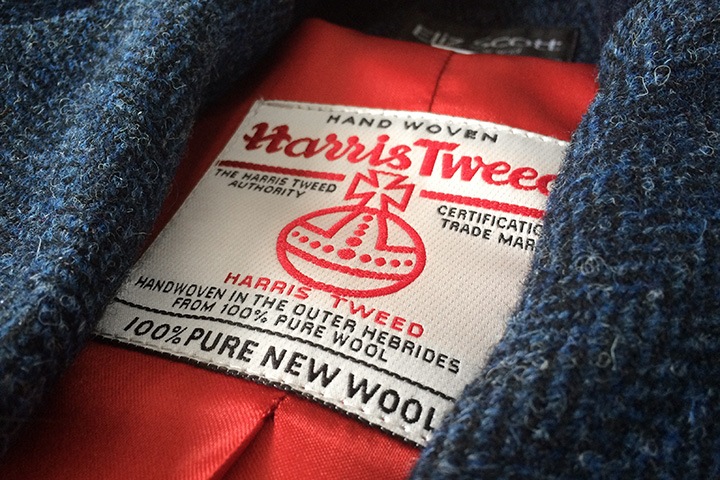 9. The feeling of space and peace

For city-dwellers like me, space, peace and quiet are all scarce resources. But the Isles of Lewis and Harris have plenty of them to spare. Even on Luskentyre Beach on a sunny Saturday in the middle of August, we counted at most 25 other people. Imagine it transported to Cornwall and you wouldn’t find a spare patch of sand. Outside of Stornoway the roads are quiet and there’s so much space to explore – deserted coves, coastline, lochs and acres of countryside. It’s the perfect place to stop, leave your stresses behind, relax and unwind for a few days. 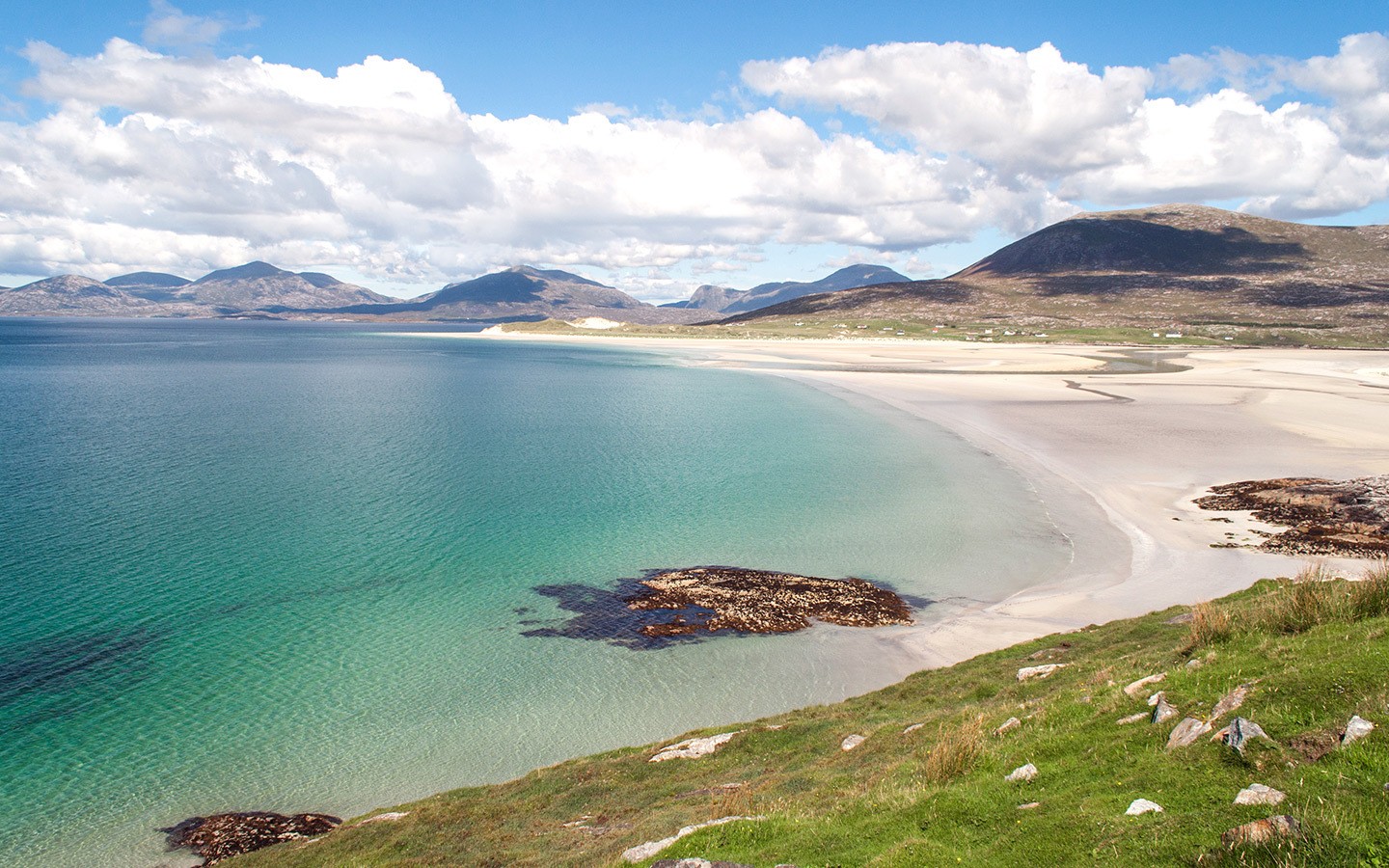 So much space at Seilebost Beach!

Getting to the Isles of Lewis and Harris

There’s an airport in Stornoway on the Isle of Lewis which has flights from Edinburgh, Glasgow, Inverness, Aberdeen and Manchester with Loganair. There’s also a ferry from Ullapool on the Scottish mainland to Stornoway and from Uig on the Isle of Skye to Tarbert on Harris. And you can travel on to the other Outer Hebrides islands via the Leverburgh–Berneray ferry.

Getting around the Isles of Lewis and Harris

There is a bus service on the islands, but it’s not very frequent and you can’t get everywhere by public transport. So if you want to explore and stop off wherever you like, it’s best to hire a car. There’s a car rental desk at Stornaway Airport or you can pick up a car at from the ferry terminals in Stornaway or Tarbert, but book in advance as there’s limited availability. 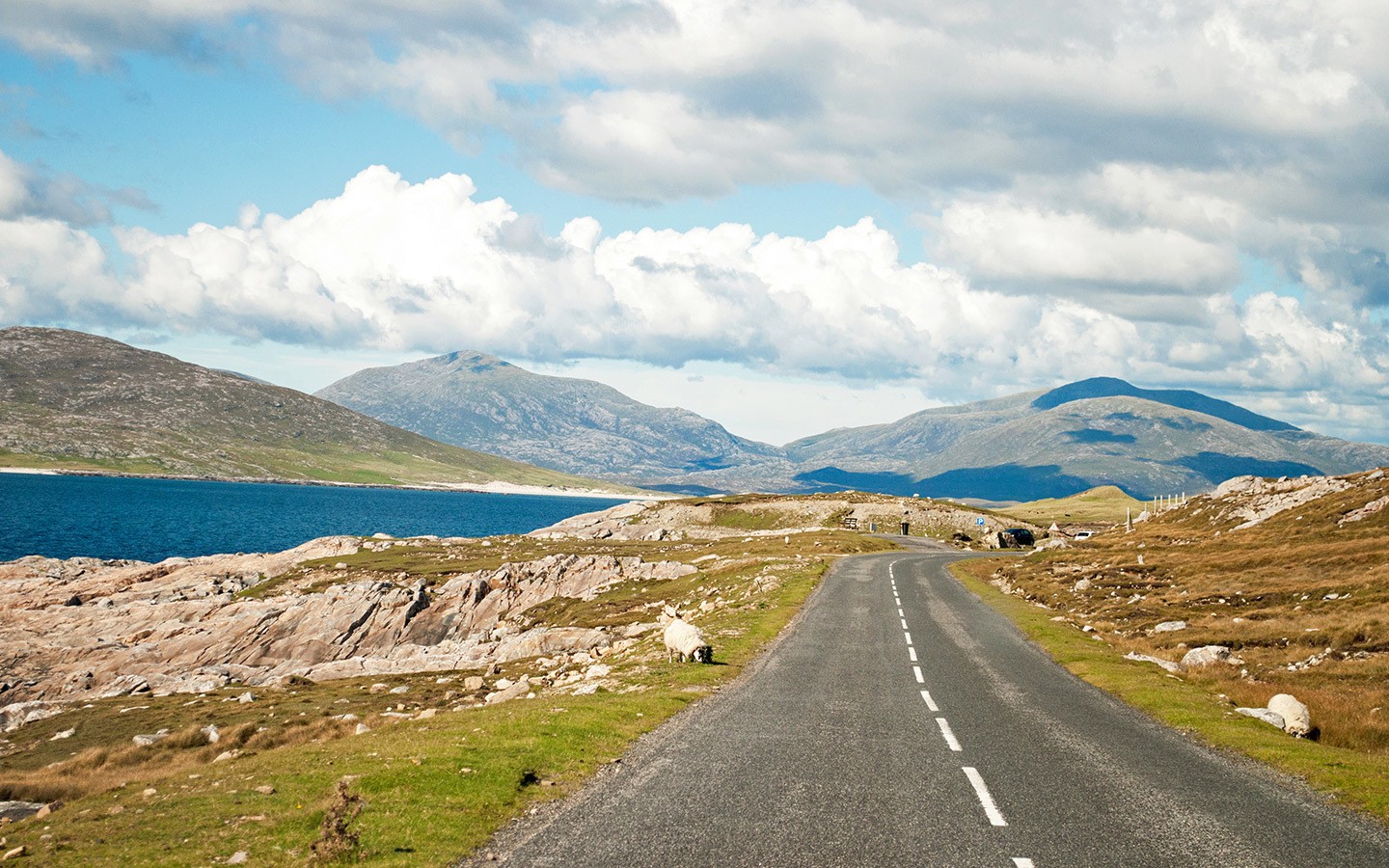 We used Car Hire Hebrides and paid £190 for four days in August. Driving in the Outer Hebrides usually means lots of single lane and winding roads, but there are plenty of passing places. Traffic’s normally pretty light but you might have to share the road with a few sheep.

Where to stay on the Isles of Lewis and Harris

There are only a few hotels on the islands, but there are plenty of guesthouses and self-catering rentals. We stayed in a four-bedroom house overlooking the sea in the hamlet of Brue on the west coast of Lewis through AirBnB, costing £887 for four nights (if you’ve not yet signed up with AirBnB, you can save £25 on your first stay with this link). Or if you’re looking for a wow-factor place to stay, Gothic Lews Castle in Stornaway has beautifully renovated apartments. 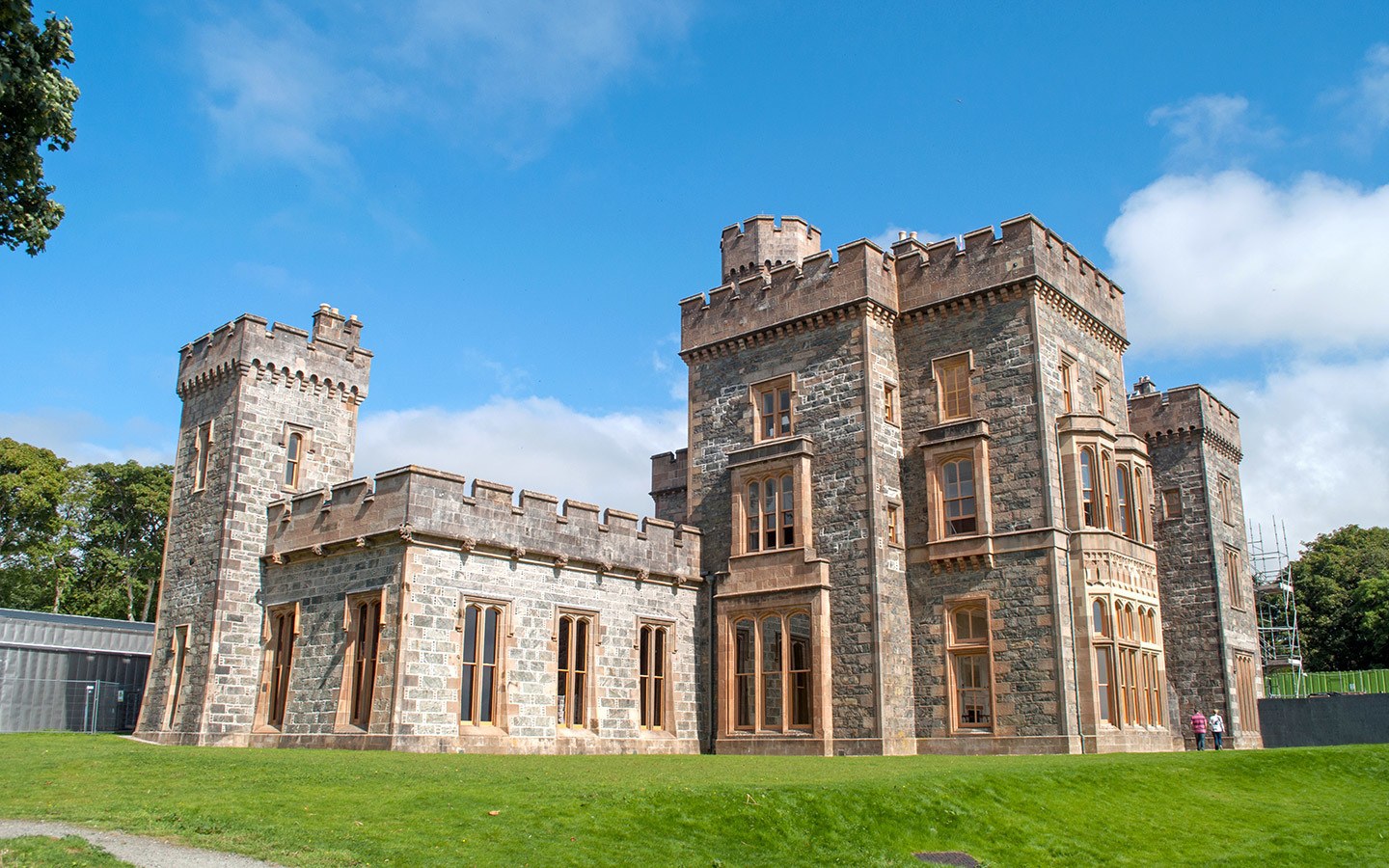 Looking for somewhere to stay in the Outer Hebrides?