From Mary Poppins and Lawrence of Arabia to Harry Potter and Love Actually, London’s streets, skylines and iconic buildings have formed the backdrop for hundreds of films. Every era of the city’s history has been recreated on screen, and it’s also been passed off as everything from 18th-century New York to alien planets. It’s hard to find a corner of the city which hasn’t appeared in film, but this self-guided walking tour takes you through some of the best London film locations. The walk covers almost five miles and takes around three hours, so grab your camera and follow me for a journey through time and space – all without leaving the streets of London.

Start your London film locations walking tour at Westminster Abbey (nearest Tube station: Westminster). The oldest sections of this grand Gothic Abbey date back to 1050, and it’s been the site of generations of royal weddings, coronations and burials. On film, Tom Hanks and Audrey Tautou search Sir Isaac Newton’s grave in the Abbey for clues to the location of the Holy Grail in The Da Vinci Code. Visitors can see Newton’s real grave, but church authorities didn’t approve of the book, so the interiors in the film had to be shot in Lincoln Cathedral instead.

Walk across Parliament Square past the Houses of Parliament – featured in the 1978 version of The Thirty Nine Steps, which ends with the main character hanging onto the clock face of Big Ben’s clock face – though unsurprisingly this was a studio replica rather than the real thing. On your right you’ll see Westminster Bridge. The first bridge was built here in 1750, replaced by the current cast iron version in 1862, making it central London’s oldest surviving road bridge.

On film, Westminster Bridge famously featured in the apocalyptic thriller 28 Days Later, with Cillian Murphy staggering across it after waking up from a coma to find London deserted – though you’d need to get up at 4am too if you want to see it looking that empty. The bridge is also where Blofeld’s helicopter gets shot down in the finale of 2015 Bond film Spectre.

Follow Parliament Street/Whitehall north to the National Gallery in Trafalgar Square (0.5 miles), passing Downing Street along the way. When the door to 10 Downing Street is shown on screen it’s usually a replica – or a very similar looking door you can find in Adam Street just off the Strand – but the real version did feature in wartime drama Darkest Hour.

Trafalgar Square has appeared in many films, including as the site for Victory Day celebrations in both Captain America: The First Avenger and Wonder Woman, and as the gathering point for the menacing masked hoardes at the end of V For Vendetta. From Trafalgar Square, call into the neighbouring National Gallery, where the Sackler Room featured in a scene from Skyfall as Q meets with Bond in front of the Turner painting The Fighting Temeraire.

Take the back exit from the National Gallery and follow Orange Street past the Garrick Theatre – aka the Gotham Opera House where a young Bruce Wayne watches a performance with his parents in Batman Begins. Then head down William IV Street and east along the Strand until you reach the Art Deco-style five-star Savoy hotel* (0.4 miles), which has hosted a string of famous guests from the world of film, from Charlie Chaplin to Marilyn Monroe.

On screen, The Savoy is where Julia Roberts’ character gives a press conference in Notting Hill, with Hugh Grant passing himself off as a Horse & Hound reporter. It also appears in Entrapment and as the site of a mafia showdown in The Long Good Friday. If you fancy staying overnight, rooms start from £400 and go up to £2600 for a suite with a Thames view. Otherwise drinks at the Savoy’s American Bar – London’s oldest cocktail bar – are a bit more reasonable.

Carry on along the Strand (0.2 miles) to Somerset House. Its impressive Neoclassical frontage and central courtyard have appeared in two Bond films – as a St Petersburg square in Goldeneye and the Ministry of Defence in Tomorrow Never Dies – as well as passing itself off as a Swiss bank in X-Men: First Class and 18th-century New York in Sleepy Hollow. If you’re visiting on the first Saturday of the month, there are free film location tours at 1.15pm and 3.15pm.

Cross Waterloo Bridge and walk east along Southbank where you’ll pass a string of London film locations. At Gabriel’s Wharf (0.7 miles) in front of The Wharf restaurant is the bench where Daniel and Sam have a heart-to-heart about relationships in Love Actually. Carry on along Southbank to Tate Modern (0.5 miles), whose gallery featured in Woody Allen’s Match Point, and Tom Cruise climbed to the top of the chimney tower in Mission: Impossible – Fallout.

Just outside Tate Modern is the Millennium Bridge, which was destroyed by the Dementors in Harry Potter and the Half-Blood Prince as well as being used in an alien evacuation scene in Guardians of the Galaxy. Walk on past Shakespeare’s Globe and down Stoney Street on your way to Borough Market (0.6 miles). Look out for No 7 Stoney Street, which is where the Knight Bus stops outside the Leaky Cauldron Pub in Harry Potter and the Prisoner of Azkaban.

Borough Market is one of London’s top foodie hotspots, and if you fancy refueling, head for coffee at the Monmouth Coffee Company or ice cream from Gelateria 3BIS. On screen Borough was home to Bridget Jones, and you can find her flat above The Globe Tavern on Bedale Street. Head under the railway bridge to another location from the first film – the Greek restaurant where Hugh Grant and Colin Firth have their ridiculous fight is now Bedales restaurant.

Next cross London Bridge, continue past Monument Tube station and on up Gracechurch Street to Leadenhall Market (0.7 miles). This Victorian covered market started life as a meat market but is now home to restaurants, fashion and gift shops. It featured as Diagon Alley in the first Harry Potter film, Harry Potter and the Philosopher’s Stone. And inside the market you’ll also find a second location for the Leaky Cauldron, which was different in the first film – just look for the blue door at 42 Bull’s Head Passage, which is now an opticians’ office.

Head west from Leadenhall on Cornhill and Cheapside to St Paul’s Cathedral (0.7 miles). One of London’s most iconic buildings, it was designed by Sir Christopher Wren in the 17th century after the previous cathedral was destroyed in the Great Fire of London. On screen it has featured in classic films like Lawrence of Arabia and Great Expectations. But one of the best known scenes is from Mary Poppins, where an old woman ‘Feeds the Birds’ from the cathedral’s steps (something you wouldn’t be allowed to do now – London’s pigeons are vicious!).

St Paul’s is also where Hugh Grant impersonates a nun in 2017’s Paddington 2. And the spectacular spiral staircase known as the Dean’s Staircase, with a clever design which makes it look like it’s floating without any support, has been used in Guy Ritchie’s Sherlock Holmes, The Madness of King George and Harry Potter and the Prisoner of Azkaban.

Walk up King Edward Street and you’ll find Postman’s Park (0.3 miles). This quirky park was created by a Victorian artist as a ‘Memorial to Heroic Self Sacrifice’, and its walls are covered with hand-painted tiles commemorating the stories of 62 ordinary local people who gave their lives to save others. The park was the location for a scene from the 2004 film Closer, featuring Jude Law and Natalie Portman, after writer Patrick Marber came across it by accident.

Church of St Bartholomew the Great

From Postman’s Park, walk up Little Britain to the final stop on your London film locations walking tour – the Church of St Bartholomew the Great (0.2 miles). This is the oldest parish church in London, starting life as an Augustinian priory in 1123. It was the venue for the fourth – unsuccessful – wedding of Charles and Duckface in Four Weddings and a Funeral. It has also featured in Robin Hood: Prince of Thieves, Shakespeare in Love and The Other Boleyn Girl – and the church’s nave stood in for the crypt of St Paul’s Cathedral in Sherlock Holmes.

Looking for somewhere to stay in London?* 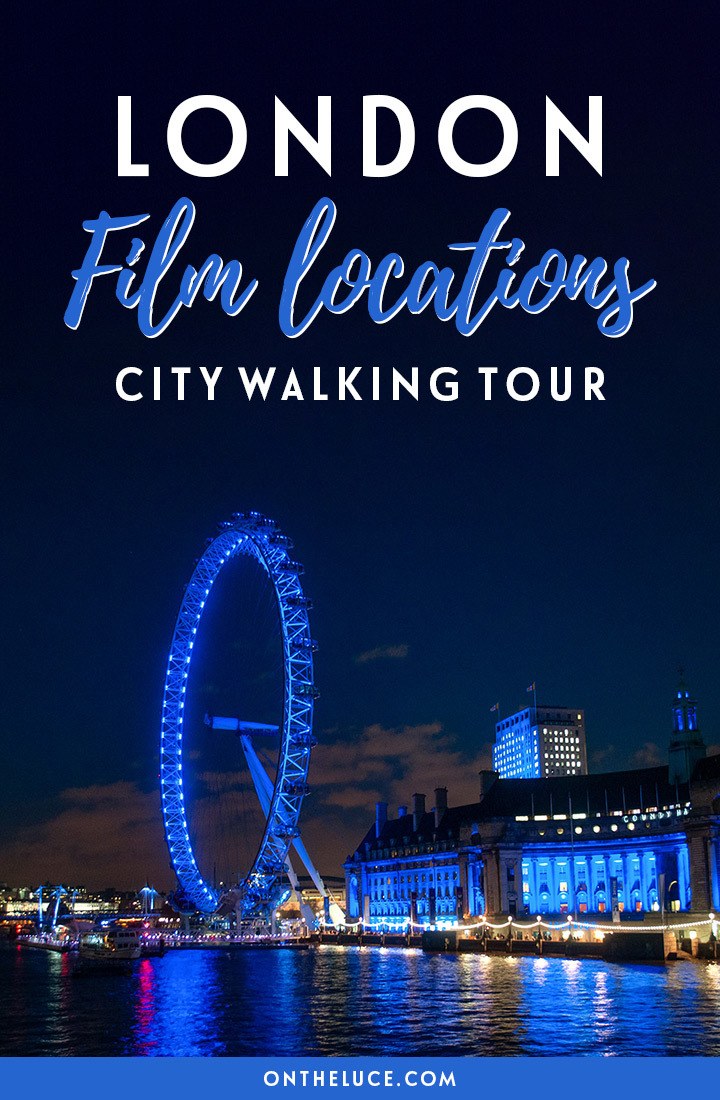 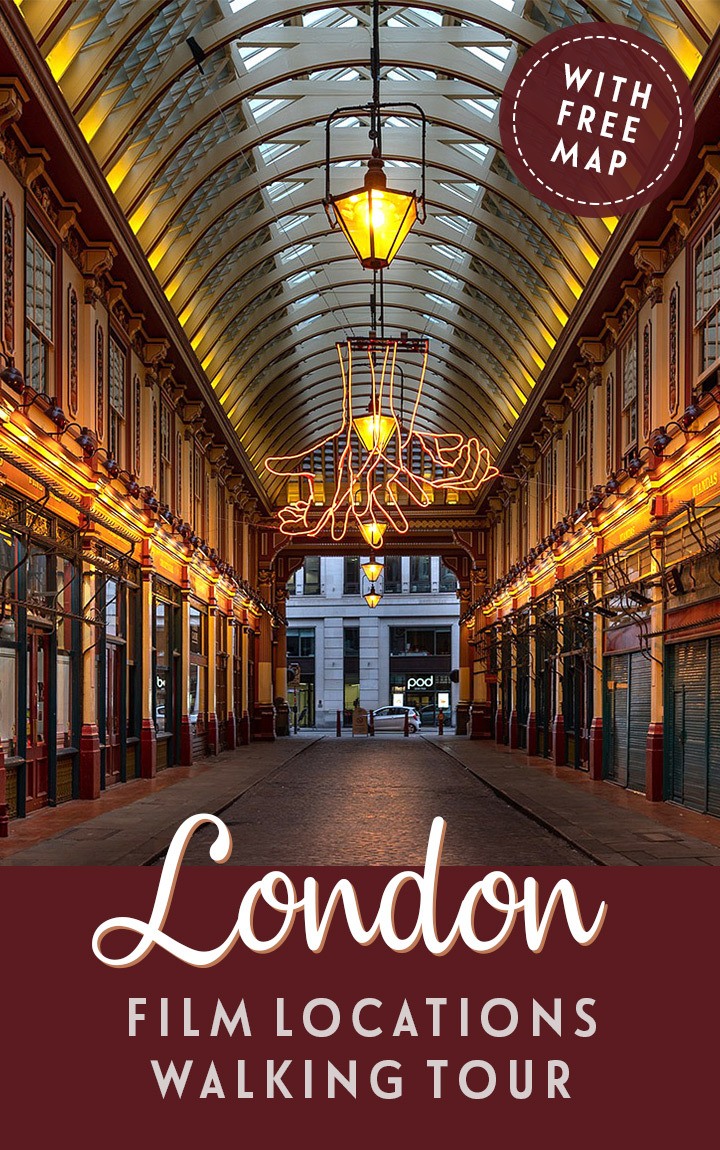 Boutique on a budget: Affordable hotels in London

10 of the best London food tours and tastings

What a wonderful post. I hadn't realized that so much had been filmed at St Pauls Cathedral, although I can see why.

Yes it's such an impressive building isn't it!

That's a lovely thing to do. I always see loads of Harry Potter fans at King's Cross station while waiting for trains back home.

Yes that's definitely one of the best known film spots in London!

I love this! I've seen quite a few of them without even knowing they were film locations! Next time I visit I'll be looking out for them. Love the handy map too.

Thanks, and yes it's surprising just how many films have been filmed in London, and some you'd never guess!

For the Savoy, there is also Gambit with Colin Firth and Cameron Diaz !

Don't think I've seen that yet – thanks for the tip!

This is such a fun walk, I'm going to try it out with my Harry Potter-mad kids!

Hope they enjoy it!