After 10 years living in London, one of the biggest shocks I had was how tough it is finding somewhere to stay when you’re visiting. The problem isn’t a shortage of options – there are over 1000 hotels in the city, as well as hundreds of B&Bs and apartments. But how do you narrow it down, particularly when you’re looking for affordable hotels in London?

My tastes – and my budget – lie somewhere in between hostel rooms and five-star luxury, but with London’s sky-high prices, even an average chain hotel can set you back over £200 a night. So is it possible to get a high-quality experience and a central London location without a scary price tag? It is at these affordable luxury hotels in London, where a stylish boutique-style room in the heart of the city can be yours for not much over £100 a night.

Each of these hotel brands – often small chains with a few locations around the city – have stripped back unecessary feature like gyms or business centres, and concentrated on offering good-value rooms. But you don’t have to sacrifice style if you want an affordable hotel in London, with high-quality beds, contemporary furniture and artworks, as well as a few luxurious extras. Which makes them my go-to choices when I’m visiting the city.

Map of affordable hotels in London

Formerly known as the Nadler, the Resident has four locations in London – in Soho, Victoria, Kensington and Covent Garden. They offer four-star rooms at an affordable price by editing out the hotel extras. So the focus is on the rooms, which come with some added luxury touches like pillow menus, Nespresso machines and Brita water filters.

One thing I loved was the mini kitchenette in each room, with microwave, sink, kettle, fridge and cutlery and crockery. So you can easily get your own breakfast or a takeway. The hotel also has a list of local restaurants, bars and fitness centres with discounts for guests.

I stayed at the Resident Kensington, a five-minute walk from Earl’s Court Tube station and 20 minutes from the V&A, Science and Natural History museums. The Resident Victoria is opposite Buckingham Palace and 10 minutes’ walk to Victoria Tube and coach stations. The Resident Soho is just south of Oxford Street and the Resident Covent Garden is near the Royal Opera House, both surrounded by bars, restaurants and West End theatres.

Another smart, central option are Z Hotels. They brand themselves as ‘The Urbanite Stay’ and have 10 locations across London. Rooms are compact but smartly designed to make the most of the space and focus on the essentials – quality beds and powerful showers. They’re perfect if you want to be in the heart of things and won’t be spending too much time in your room.

There are singles, small double and larger queen rooms. Cheapest are the inside double rooms which don’t have a window and start from £60–£70, depending on location. All rooms have glass-walled en-suite wet rooms with Thierry Mugler toiletries, 40″ HD TVs and free Sky TV and wifi. There’s also an attached Z Café and bar in each hotel which offers a buffet breakfast each morning then serves sandwiches, snacks and drinks later on.

Location wise, the Z Hotel Victoria is right opposite Victoria train and Tube station. The Z Hotel Holborn is close to Holborn Tube station on Kingsway. The Soho and Tottenham Court Road branches are both south of Oxford Street close to Leicester Square and Theatreland. And the Covent Garden and Trafalgar branches are further south near the Strand.

CitizenM is a Dutch hotel brand with three locations in central London. They’re known for their quirky decor, with bright colours, modern artworks and stylish furniture. Hotels have a communal lounge area where you can hang out away from your room with books and computers to borrow, as well as food and drink available at the on-site canteenM.

There’s only one category of room, with a king-sized bed, en-suite with rain shower and wall-to-wall windows to make the most of the view (or blackout blinds to keep it out). The rooms have a high-tech feel with ambient lighting and a touchscreen tablet to control the lights, temperature, blinds, music system and TV. There’s free wifi as well as movies on demand.

The Citizen M Bankside lies just south of the Thames, close to the Tate Modern art gallery and Borough Market. The Tower of London hotel is located just behind the tower and a short walk from Tower Hill Tube station, with some rooms having views of the Thames. And the Citizen M Shoreditch is close to Liverpool Street and Shoreditch overground station, with Boxpark Shoreditch and Old Spitalfields Market a few minutes away.

Qbic is another hotel brand which started in the Netherlands, and they now have hotels in London and Brussels as well as their original Amsterdam branch. Rooms at these stylish, affordable hotels in London are based around a pod design to make the most of the space.

The hotel also has a Bar + Kitchen where you can order food and drinks from the seasonal British menu. The Qbic London City is located between Whitechapel and Algate in the East End, and is an easy walk to Shoreditch and the Tower of London.

ibis Styles is the cooler, designed-focused younger relation of the ibis hotel brand, with branches across the world – including four in central London. The design of each of the hotels is different, using a unique concept which takes inspiration from its location (you can check out my review of their weather-themed Manchester hotel).

The en-suite rooms come with a queen size or twin bed. There are also some single rooms and some larger, premium rooms which include extras like Nespresso machines and sofa beds. They’re also family friendly with family rooms and kids areas.

The ibis Styles Southwark is close to Borough Market and London Bridge. The Gloucester Road hotel is in Kensington, opposite Gloucester Road Tube station and five minutes’ walk to the Natural History Museum. The ibis Styles Kensington is only a few minutes away from that to the west, near to Earl’s Court station. And the Excel hotel is in East London, near to the Excel exhibition centre, the O2 music venue and London City Airport.

If you don’t need fancy extras and just want an affordable but stylish room for the night, try Point A Hotels. Formerly owned by Asian chain Tune Hotels, they have seven hotels in London. There’s a simple choice between doubles or twin rooms (with accessible versions with adapted bathrooms and room for a wheelchair), with or without windows.

Rooms make the most of the space with the basics done well – and comfortable beds, underbed storage, a drop-down desk, smart TV, mood lighting, air con and power showers. I’ve stayed in a couple of their hotels and they make a great place to crash if you are out and about exploring London, with really convenient locations.

Their King’s Cross St Pancras, Paddington and Liverpool Street hotels are right next to the respective stations so they’re perfect if you have an early train, Eurostar or flight to catch. The Point A Westminster is across the river from the Houses of Parliament. The Kensington branch is close to Earl’s Court and Olympia. The Point A Shoreditch is near to Old Street station. And the Canary Wharf hotel is close to Docklands and the Museum of London.

So those are my favourite affordable hotels in London for luxury on a budget – have you stayed in any of them, or do you know of any other great places to stay in London? 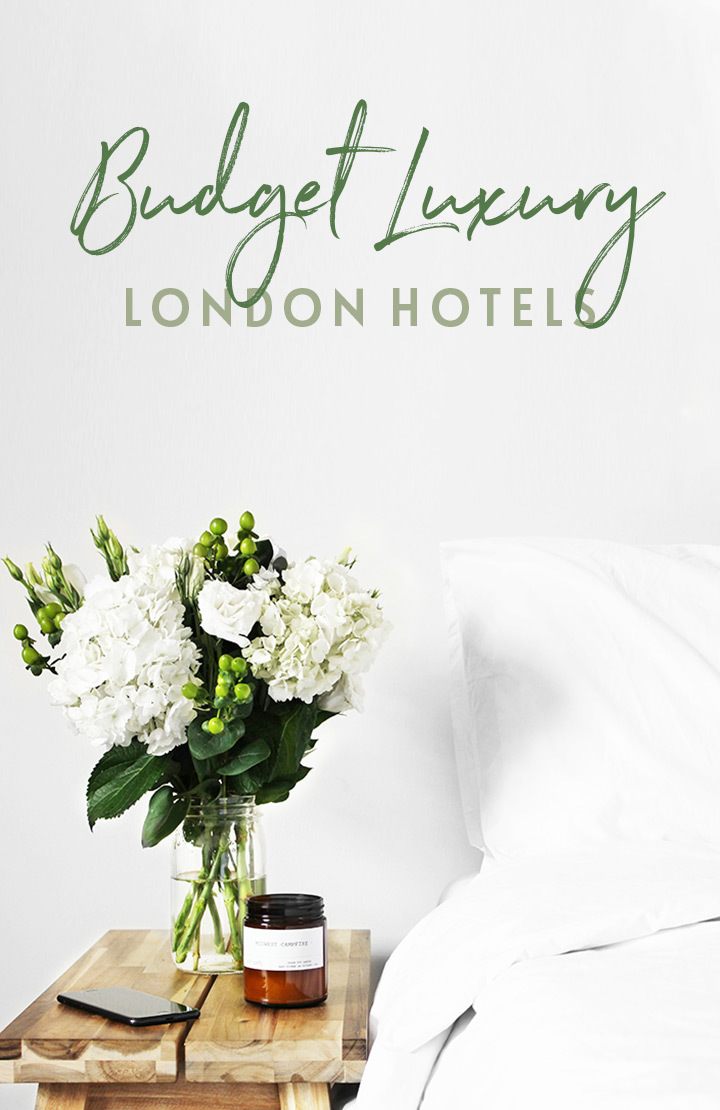 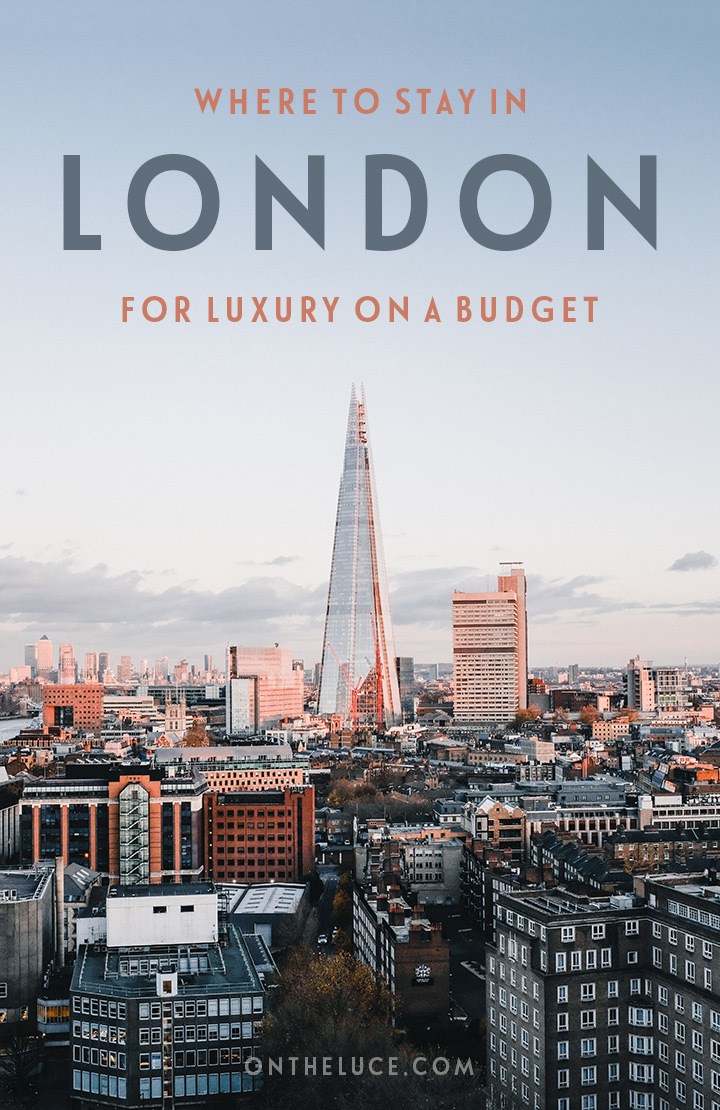 * This article contains affiliate links where I receive a small commission at no extra cost to you. Note: photos are courtesy of the hotels mentioned, but I booked and paid for my stays myself.

Thanks a lot, Lucy for sharing such a beautiful article on London. I myself is a Londoner and love my city.

It's a great place – glad you liked the article!

I have stayed in Z hotel twice now - purely because I had to find something in central London at short notice and everything else was eye-wateringly expensive. But the rooms here are absolutely tiny (beware as some don't even have windows!), the bathrooms are 'carved out' of the room's footprint, and there aren't even bedside lights. And you check in in the bar/canteen. If all you need is a place to sleep for one night, this is OK. But if you can book early and pay the same for a bigger room elsewhere.

Hi, there's a range of different room types so if you do want to minimise costs you can go for one without a window – I've stayed in a couple and the room size does vary but it's been fine for a city break when you're not spending too much time in the room. I'd always advise booking early if you can though as that'll cut your costs wherever you choose to stay.

I'm so glad I stumbled across this on your blog, Lucy! I've been hunting for somewhere nice (but budget-friendly) to stay when I visit London for the Cosmo Blog Awards, and these ideas are awesome - thank you!

Hope you manage to find the perfect place – and best of luck for the awards, will keep my fingers crossed for you!

Great tips here - I live in London so not really in need of hotels usually but it's always embarrassing when friends from abroad ask me for tips on good value London hotels and I never know any!! I'll have to forward them this link and keep a note of these should I ever need one myself!

Thanks, I used to have the same problem when I lived in London – a local resident is probably the worst person to ask for a hotel recommendation! Hope it comes in useful for your friends.