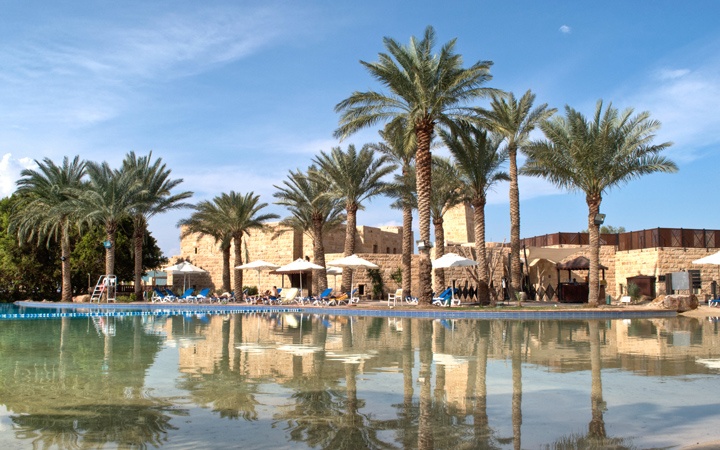 The Dead Sea is already the world’s lowest and saltiest sea, but it’s getting lower and saltier all the time. Its hot weather and lack of rain mean more water evaporates out than flows in. So the salt gets more concentrated, as do other minerals like magnesium, sodium and potassium. Bad news for anything that wants to live in there, but good news for visitors who’ve been coming here for thousands of years to treat skin diseases by soaking in the waters or help breathing problems with its high oxygen level air. You don’t want to leave it too long to visit though, as the water level has been dropping by several feet a year as rivers get diverted for use in agriculture and industry. It’s estimated if this carries on at the same rate the Dead Sea could dry up completely by 2050. So I thought I better get in there while I could. 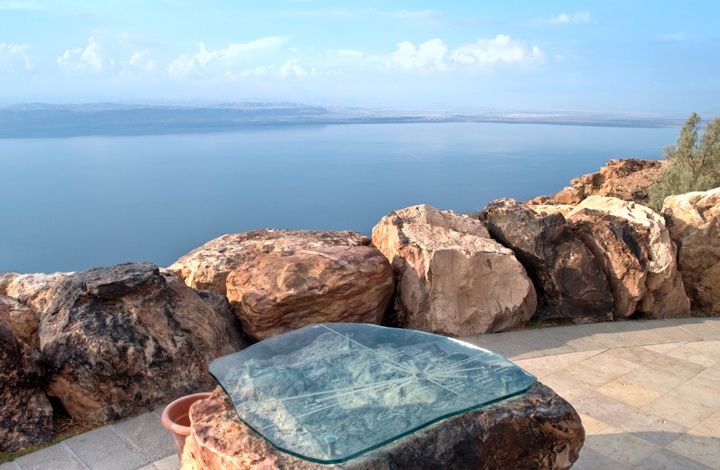 View across the Dead Sea from the Panoramic Complex

The banks of the Dead Sea are rocky and the highway runs close to the shore, so if you want to take a dip then you’re probably best going to one of the beaches. The cheapest option is a public access beach like Amman Tourist Beach, just south of the main hotel area. For JD20 (about £19) you get day entry and can use their showers and changing rooms. It can be packed at the weekend and the facilities are fairly basic, but it’s the best way to mix with the locals and try the waters on a budget. Also not too expensive and worth a visit is the Dead Sea Panoramic Complex, high in the hills above the water. The views from there are stunning and on a clear day you can almost see from one end of the sea to the other. 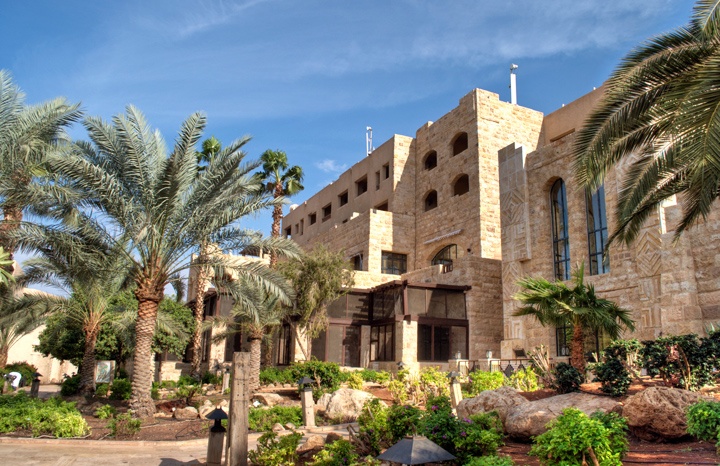 But if you want to stay overnight at the Dead Sea, then your only choices are five star. Five-star hotels are definitely not my normal accommodation choice, but after a couple of days clambering over rocks and walking miles around Petra I figured I’d earnt some luxury. The north-eastern part of the Dead Sea is a real enclave of huge luxury hotels, all with their own spas and beaches. They’re all similar in style but we chose the Mövenpick Resort & Spa, an Arabian-style village built among 6000 square metres of swimming pools and gardens with a spa and nine restaurants and bars. 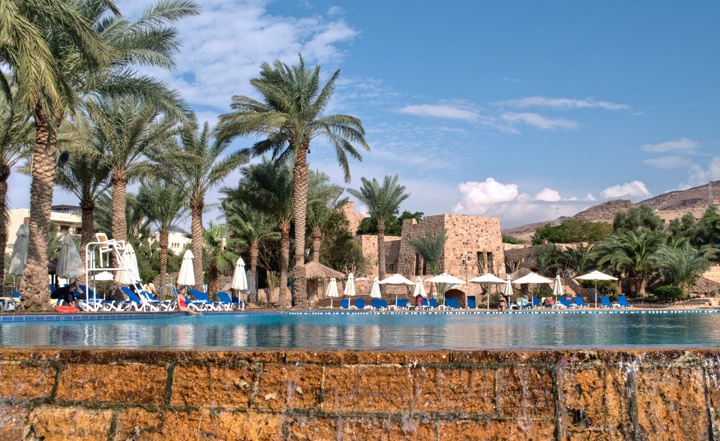 One of the swimming pools

Although this area gets less than 4cm of rain in the entire year, it felt like half of it fell as we were driving down the Dead Sea Highway. Going into the hotel’s entrance was more like wading through a pond, but we got whisked off to our room in a golf cart with our baggage. Rooms vary from smaller ones in the main building to sea view villas with their own pool. We were down the more reasonable end of the spectrum with a first-floor room in the ‘village’, with a balcony overlooking the gardens. All rooms had nice touches like Dead Sea toiletries in the bathroom and a minibar with complimentary soft drinks and snacks. 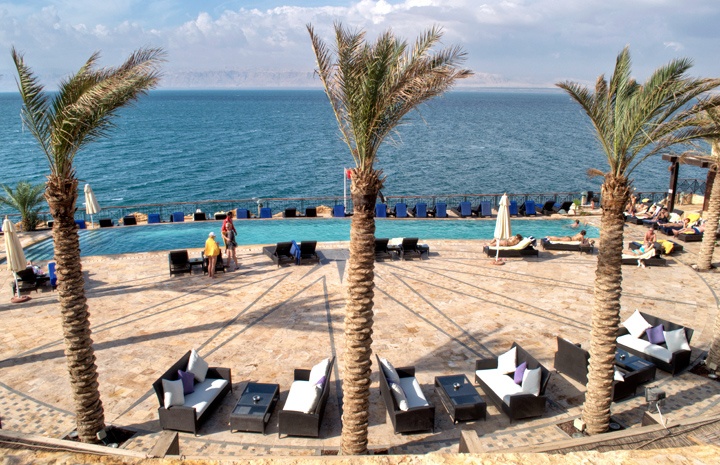 The hotel has tennis courts and a fitness suite but most people are here to relax. There’s the in-house Zara Spa for massages and hydrotherapy treatments, or you can lather on some Dead Sea mud for free and wash it off in the sea. The hotel also has four freshwater pools, though the winter pool was the only one I was brave enough to go in in November. Being off-season does mean there was plenty of space on the sun loungers to laze about with a book and to grab the perfect sunset spot by the infinity pool. 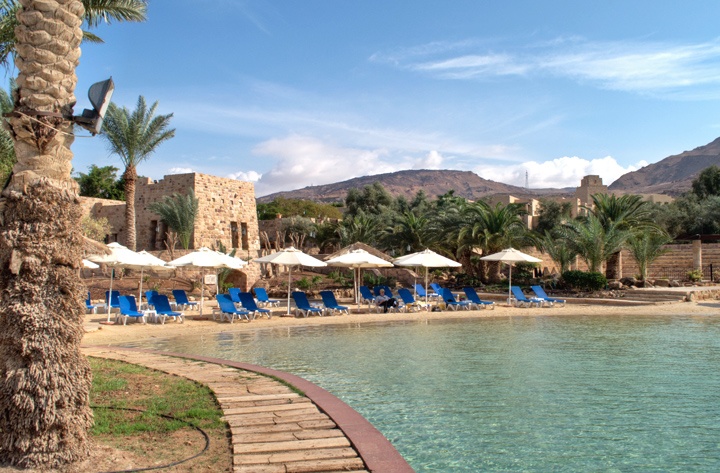 Relaxing by the pool

It’s not all paradise though in the five-star world. The problem with being in a luxury enclave like this is that you could be anywhere in the world. Although the design is Jordanian influenced, it does feel a bit sanitised and the other guests were all weekending expats or holidaying Europeans. There isn’t much other than hotels in the area so most people don’t tend to leave the complex – fine for two nights but I can imagine going a bit stir crazy for longer. You’re also paying a premium as the only options for eating and drinking are in the hotels – dinner in the buffet restaurant was JD26 (about £25) here, as opposed to JD16 (£15) for the same in the Movenpick hotel in Petra, or half that in a budget restaurant. 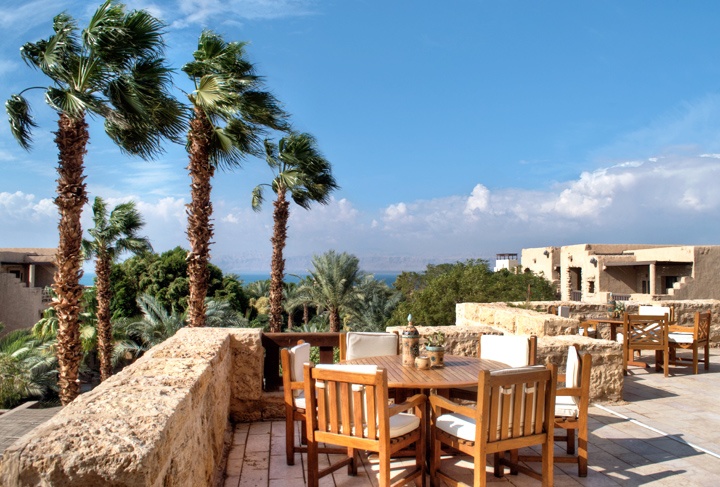 Overall the Dead Sea was beautiful and it was a lovely relaxing place to spend a couple of nights. But if you’re watching your budget, then even if you get a good deal on the room you might find yourself having to be careful what you spend. A couple of spa treatments and £10 beers (ouch) would have cost more than our entire stay at Petra, but it’s nice to experience the luxury lifestyle occasionally! 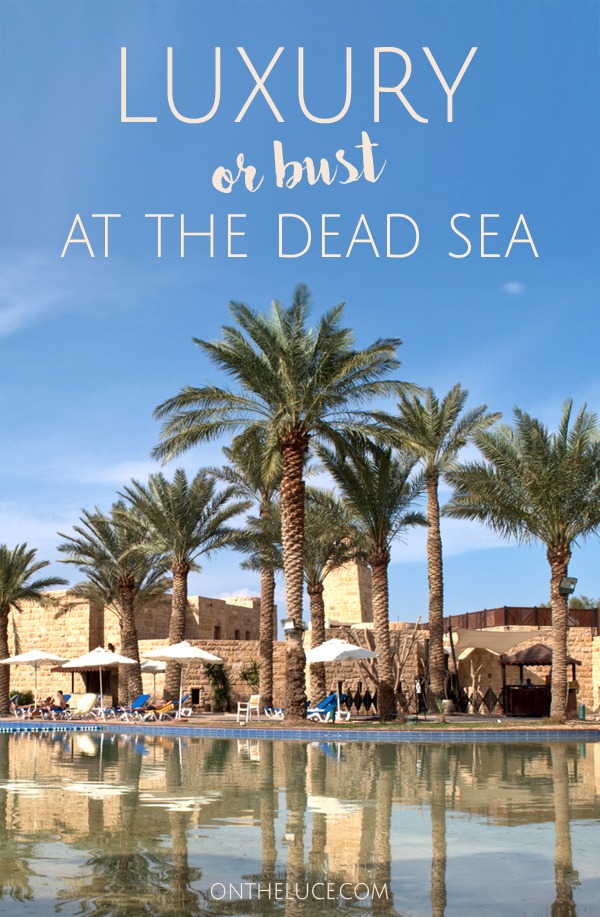 We're drooling while we imagine ourselves in those gorgeous scenes. We have dreamed of doing this too. Your DIY trip seems like the way to go for sure. Thanks for sharing all the details that can make it a reality. Very cool.

Thank you – soaking in the Dead Sea is such a weird experience but a real must-do!

Concerning the resorts at the Dead Sea I totally agree with you, there is no soul in these places but unfortunately there is no other best way to go in the Dead Sea but some of them are not that expensive, I can advise, Holiday Inn, Oh Beach or Dead Sea Spa Hotel for the small budget.

The good thing to do as well could be the Ma’In Hot Springs. If it’s not to hot at the Dead Sea (which is very rare) you can spend the day at the hot springs and you will love it!

Thanks Flora, great tips – we wanted to go to the hot springs but didn't have time, hopefully I can make it back to Jordan sometime soon though.

We opted for the Marioitt next door and LOVED it. Did splurge on the Movenpick in Petra though, just for its location :-)

It was so hard to pick one of the Dead Sea hotels as they all seemed quite similar. I really liked the Petra Movenpick, though I could only stretch to dinner and drinks there!

The Dead Sea was freaky, wasn't it? Such a strange experience to be so buoyant! and definitely not fun when I got some of the water on my lips. Man, that stung! We ended up at the Amman touristic beach, and it was okay, but also a little uncomfortable...lots of local men around blatantly staring at the tourists. I wish we'd sprung for the Movenpick! It's looks lovely!!!

I heard that the men on the public beach can be a bit starey so glad we went for the Movenpick! You can get day passes to the spa and facilities there but I think they were about JD40 so almost as much as staying there!

Thank you for sharing. Your pictures are beautiful. The Dead Sea looks like a very interesting place to visit.

Thanks Gerard, it is definitely worth a visit, it's a really unique place.