How to spend a weekend in Windsor: Discover the best things to see, do, eat and drink in Windsor in a two-day itinerary featuring this royal town’s castles, deer-filled parks, breweries and boat trips.

AD: My visit was hosted by Visit Windsor, but all views are my own.

Set on the banks of the River Thames and dominated by its grand hilltop castle, the Royal Borough of Windsor has over 1000 years of history to explore. It’s a popular day trip from London, but there’s more than enough to do in Windsor to make a weekend of it. And you’ll be in good company if you do – it’s one of the Queen’s favourite weekend getaways.

So follow in the footsteps of royalty with this 2-day itinerary, which will help you plan the perfect weekend in Windsor. We’ll show you the best things to see and where to eat, drink and stay in this scenic riverside town as we ‘Rediscover the Royal Borough’.

How to spend a weekend in Windsor

Check into your accommodation then start your weekend in Windsor at The Boatman, the only pub in Windsor right on the banks of the River Thames, located just below the castle and overlooking Eton Bridge. Their beer garden is the perfect spot for a sunny evening, when you can watch the swans sail by with a chilled beer or glass of wine.

Then head to the Windsor Grill for dinner. This independent restaurant specialises in steak, using 28-day aged Surrey Farm Beef served with crispy chips, but there’s also a selection of fish and vegetarian options on the menu. Inside it’s a cosy place with dark wood tables and candlelight adding to the atmosphere. And there’s a good value wine list.

Next morning, start your weekend in Windsor with an insider’s guide to the town from Windsor Tourist Guides. Their private guided walking tours are customisable so you can tailor them to suit your interests. Our one-hour tour with Blue Badge Guide Amanda took us to the castle, the river and the old heart of Windsor.

Along the way we heard interesting stories from the town’s 1000-year history and tips on where best to spot the Queen when she’s in town. We also discovered some of Windsor’s unique sights, from a crooked house which housed the oldest tearoom in England to a rare blue Royal Mail post box which was originally used for air mail letters.

Then take a walk in Windsor Great Park. This giant park stretches over 4800 acres, and was the private hunting ground of Windsor Castle for centuries. Now open to the public it’s a favourite with runners, walkers and 500 red deer who’ve made it their home after being introduced by the Duke of Edinburgh in 1979 – and don’t mind posing for photos.

The park is particularly atmospheric on misty mornings when the deer are often silhouetted against the trees. Stroll along the tree-lined Long Walk with its neatly manicured lawns and ancient oak trees, which were starting to turn gold and red when we visited.

The Long Walk runs for 2.7 miles from Windsor Castle’s George IV Gate to the Copper Horse statue on the top of Snow Hill – which legend has it is where Henry VIII waited for news of Anne Boleyn’s execution. Then retrace your steps along the Long Walk into Windsor, with fantastic views of the path stretching off towards the Castle along the way.

Call into the Two Brewers for lunch, a flower-decked 18th-century pub just outside the park gates on what was originally the main road from Windsor to London. They do a range of chunky sandwiches with chips at lunchtime as well as classic pub dishes.

Then spend the afternoon at Windsor Castle.* This awe-inspiring building is the oldest and largest occupied castle in the world, built in the 11th century for William the Conqueror.

The castle has over 1000 rooms – though only a fraction are open to the public as it’s still used by the Queen. If you want to know if she’s at home, then check the Round Tower and if you see the Royal Standard flag flying then it means she’s in residence.

A large section of the palace was damaged in a devastating fire in 1992 but has been lovingly restored. Don’t miss Queen Mary’s Dolls’ House, a mini aristocrat’s house designed by Sir Edwin Lutyens, and call in to the café, where you’ll often find delicately crafted cakes that were originally created for the latest Queen’s Garden Party on the menu.

In the grounds of the Castle, and covered by the same entrance ticket, St George’s Chapel is the home of the Order of The Garter – England’s grandest Order of Chivalry whose 24 members are chosen by the Queen. Ten kings and many other members of the Royal Family are buried in the chapel, and it’s also hosted a string of royal weddings in a beautiful setting with its Gothic vaulted ceilings and stained-glass windows.

And once you’ve finished at the chapel, call in to The Queen Charlotte pub. It’s just a few minutes from the castle in the cobbled streets behind the Guildhall. They specialise in gin, with a couple of their own house blends including the Gin&’er, which was created for Harry and Meghan’s wedding and is flavoured with lemon peel, lime flower and ginger.

Then go on to Sebastian’s for dinner, an cosy Italian restaurant tucked away on Goswell Hill that does delicious antipasto boards, wood-fired pizza and other traditional Italian dishes like Branzino al Forno (roast sea bass) and Linguine ai Frutti di Mare (seafood linguine).

Start your Sunday with a boat trip along the river with French Brothers, which starts near the Eton Walkway bridge. Pick up a bag of swan food while you wait for the tour to start and you’ll be instantly popular with the hordes of swans who gather on the riverbank.

Since the 12th century, the Crown has been the official owner of any unmarked mute swans in England. It’s not really enforced any more other than on the River Thames at Windsor, where they’re counted each year in an annual ceremony known as the Swan Upping. This has taken place for over 900 years, with swans caught, weighed and measured, and ownership being split between the Queen and two London Guilds.

The 40-minute boat trip takes you along the Thames as far as Boveney Lock and Weir, and there’s also a longer two-hour tour available. It’s a relaxing way to let the scenery float past you, with a commentary pointing out local landmarks and great views of Windsor Castle, the Brocas Meadows and Windsor’s unusual island racecourse along the way.

Back on dry land, cross the Windsor Bridge to neighbouring Eton and call in to The George Inn, flagship pub of the Windsor and Eton Brewery. The brewery was founded in 2010 and has already won over 60 awards for its beers, which are made using barley grown on the Windsor Farm. You can try them out along with a traditional Sunday lunch.

Then finish your weekend in Windsor with a walk through the pretty streets of Eton, home to one of the world’s most famous schools – Eton College. This exclusive (and expensive) boys boarding school was founded in 1440 by Henry VI and it has a long list of famous ex-pupils, including Princes William and Harry and 20 British Prime Ministers.

You can’t go inside the college but you can see some of its buildings at the end of the High Street, including the College chapel. If you’re visiting in term time, you might also spot some of the pupils in their distinctive black tailcoat and white tie as you walk around.

With its flags and flower-filled hanging baskets, Eton’s High Street is a good place to browse. The streets are lined with small independent shops and delis, selling antiques, artworks, jewellery, vintage books and Eton school uniforms.

Finally head back to Windsor for a final stop at Windsor Royal Station. This Victorian railway station was used by Queen Victoria, who had her own waiting room on the platform – it’s now a branch of All Bar One, but still has her private toilet! The building now houses Windsor and Eton Central railway station and upscale shops and restaurants.

Map of things to do in Windsor

How to get to Windsor

If you’re driving, Windsor is 25 miles west of London, which takes around an hour. Overnight car parking is available at the Romney Lock (SL4 6HX) and King Edward VII (SL4 6HX) car parks, which are a 10-minute walk from the castle.

The nearest airport is London Heathrow, 10 miles away. You can get to Windsor from Heathrow on the no 8 First bus from Terminal 5. Or take the train from Heathrow to Windsor, changing at Hayes and Harlington and Slough. Both take around an hour.

Windsor is fairly compact with the main attractions all close together so it’s easy to get around on foot, but there are also local buses and taxis.

Where to stay in Windsor

The Castle Hotel* is one of the oldest buildings in Windsor, which has been awarded eight royal warrants and hosted the Duke of Wellington after his victory over Napoleon at Waterloo. Today it’s a relaxed, friendly boutique hotel. The 108 guest rooms have a smart, contemporary feel, but there’s plenty of character – and great castle views.

The Sir Christopher Wren* is another Windsor hotel with a historic pedigree. It overlooks the Thames with views across to Eton. Rooms are split between the main house with its wood paneling and oil paintings, and the more modern Windsor wing. There’s a spa, gym and outdoor whirlpool bath as well as a brasserie with riverside terrace.

Or if you’re visiting Windsor with kids, it’s only a couple of miles to Legoland Resort.* There’s a hotel on site with colourful themed rooms and a pirate swimming pool, a Lego play pit and kids’ entertainment. You also get early bird access to the park.

Looking for somewhere to stay in Windsor?* 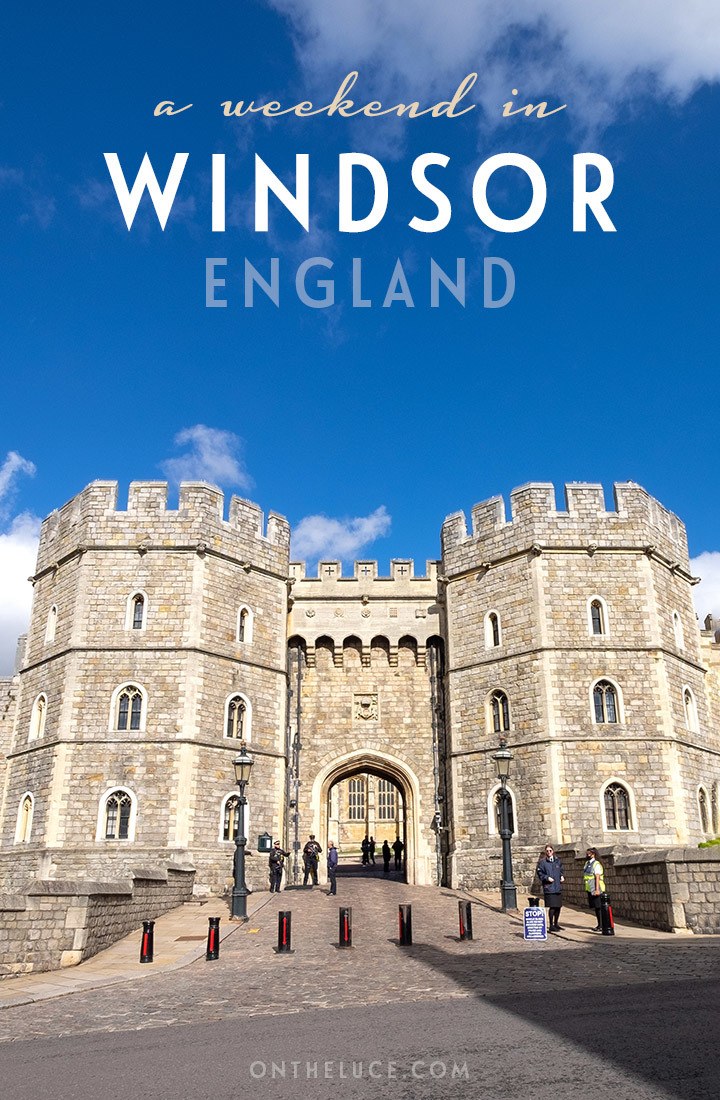 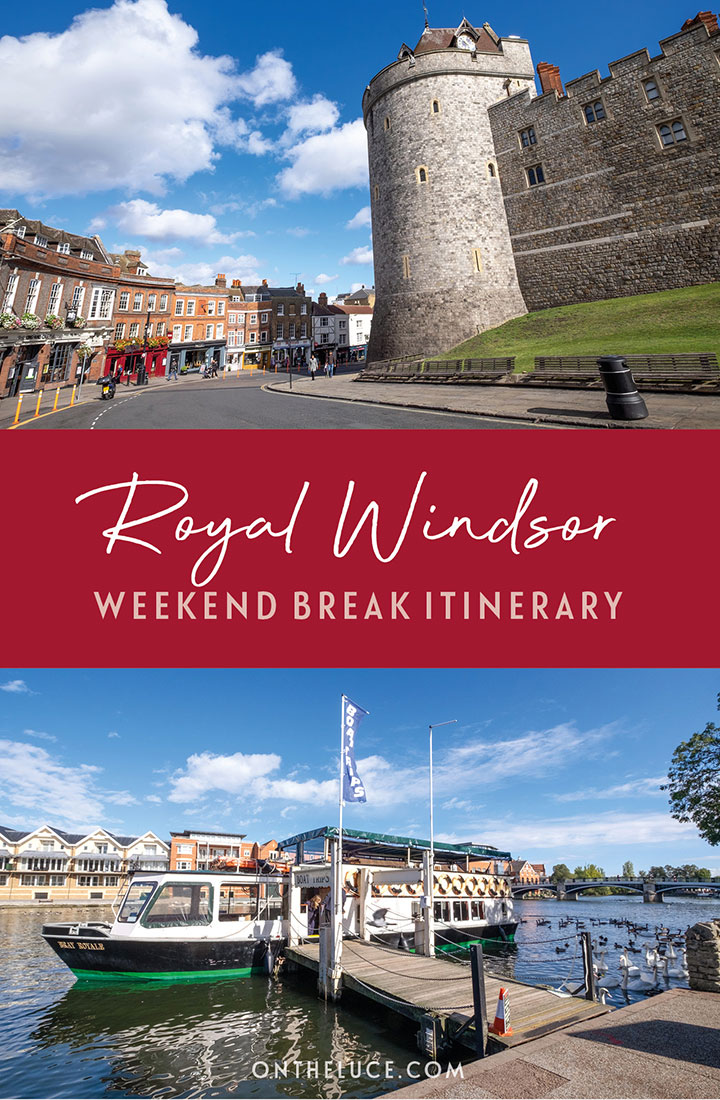 In love with England and its royal infrastructure. Thanks for sharing a detailed itinerary to visit Windsor, will follow the blog on my tour to Windsor.

You're very welcome! It's a really interesting place – hope you enjoy your trip.