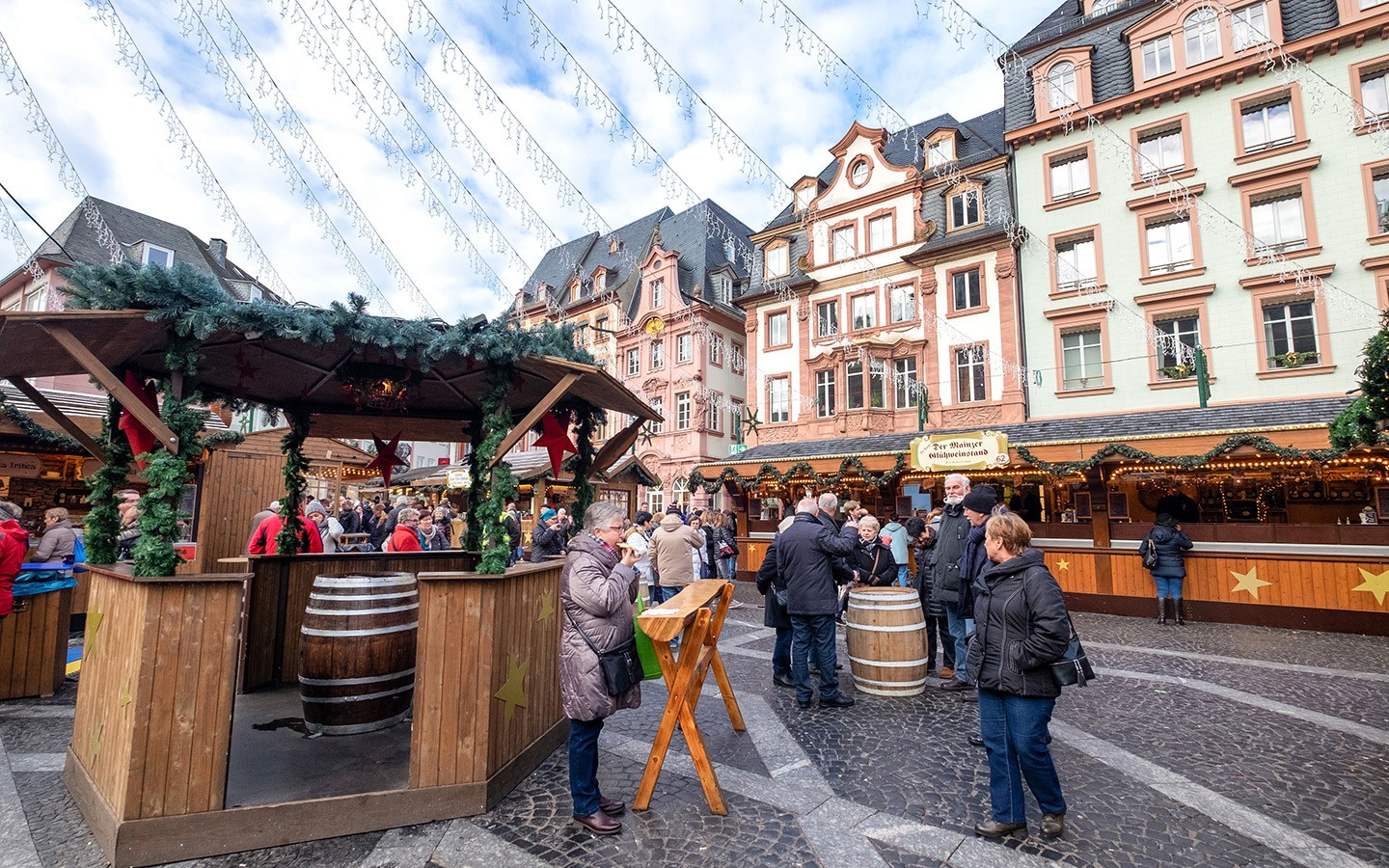 Wooden chalets full of Christmas ornaments, towering Christmas trees, sparkling lights and the smell of log fires burning, roasting chestnuts and bubbling pans of Glühwein. Christmas markets have taken over Europe, and there are few cities which don’t have their own version now. But Germany got there first with the original Weihnachtsmarkt and they still do it best. The only difficult thing is choosing which one to visit. So when I came across a full-on festive ‘Magic of Christmas’ river cruise visiting three of the Rhine’s most Christmassy spots, how could I resist? Our route took us through Germany and into France’s Alsace region, calling at Rüdesheim, Mainz and Strasbourg – but just how festive is a Christmas river cruise on the Rhine?

Read more: Canals and cathedrals: Things to do in Strasbourg, France 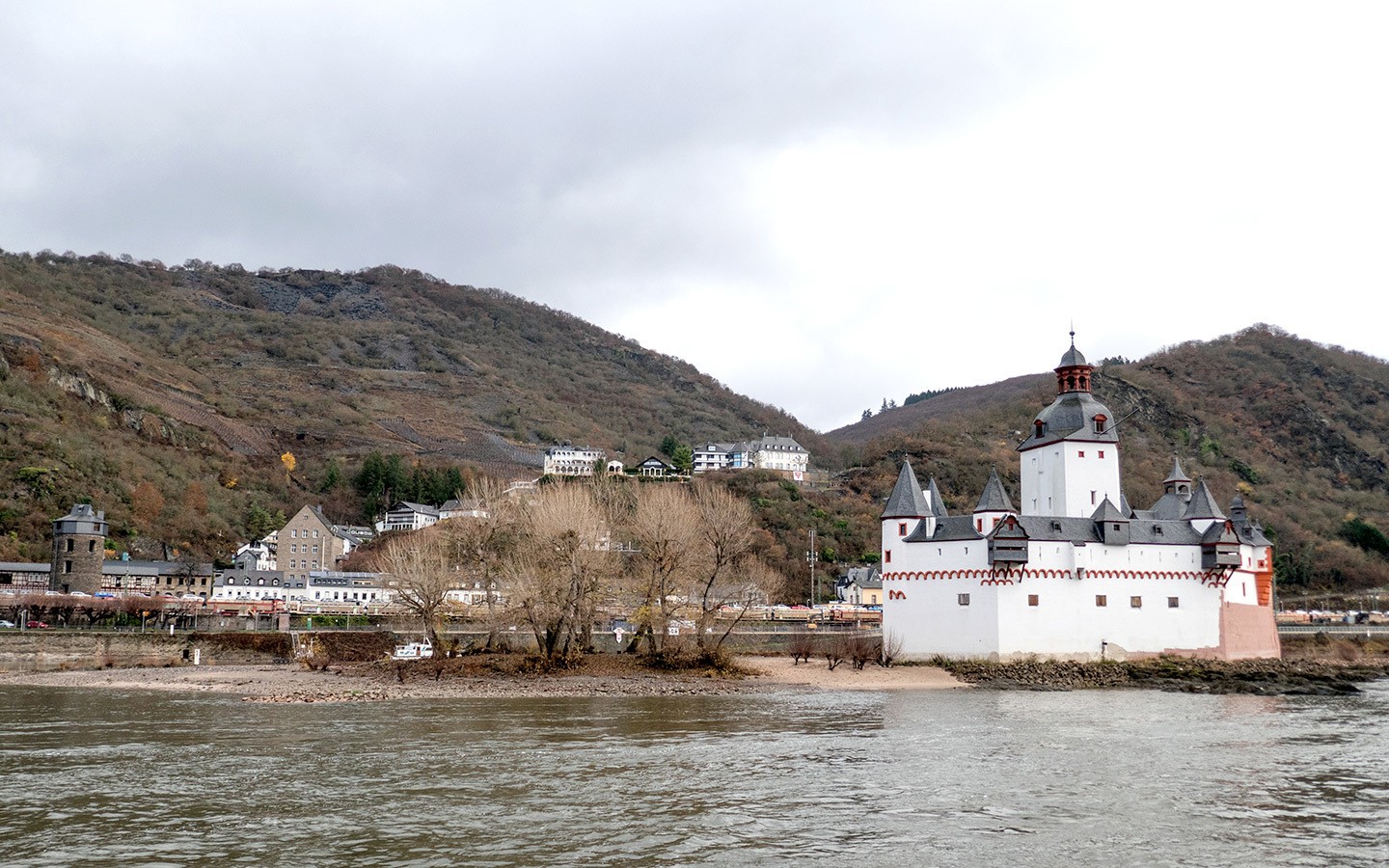 Day 1: The Rhine and Rüdesheim

The bonus of a river cruise is that the views come to you, so you can cosy up in an armchair and watch the scenery drift past. And our first morning on the Rhine took us along one of its most scenic stretches. The ‘Romantic Rhine’ is lined with waterfront towns and villages with pastel-painted houses, spiky-spired churches and hilltop castles. And behind them are the slopes of the Germany’s famous Rheingau wine region. Some of the country’s best Rieslings and Spätburgunders (Pinot Noirs) are grown on these steep south-facing riverside slopes.

This part of the river is also famous for the Rock of Lorelei – the murmuring rock. Legend has it a beautiful woman threw herself from this 132-metre-high slate rock after she found out her lover had been unfaithful, and was transformed into a siren who lured unsuspecting sailors to their death. Or less romantically it might be a combination of the current and a hidden cave that make it echo. Either way it’s inspired painters, composers and poets for centuries. 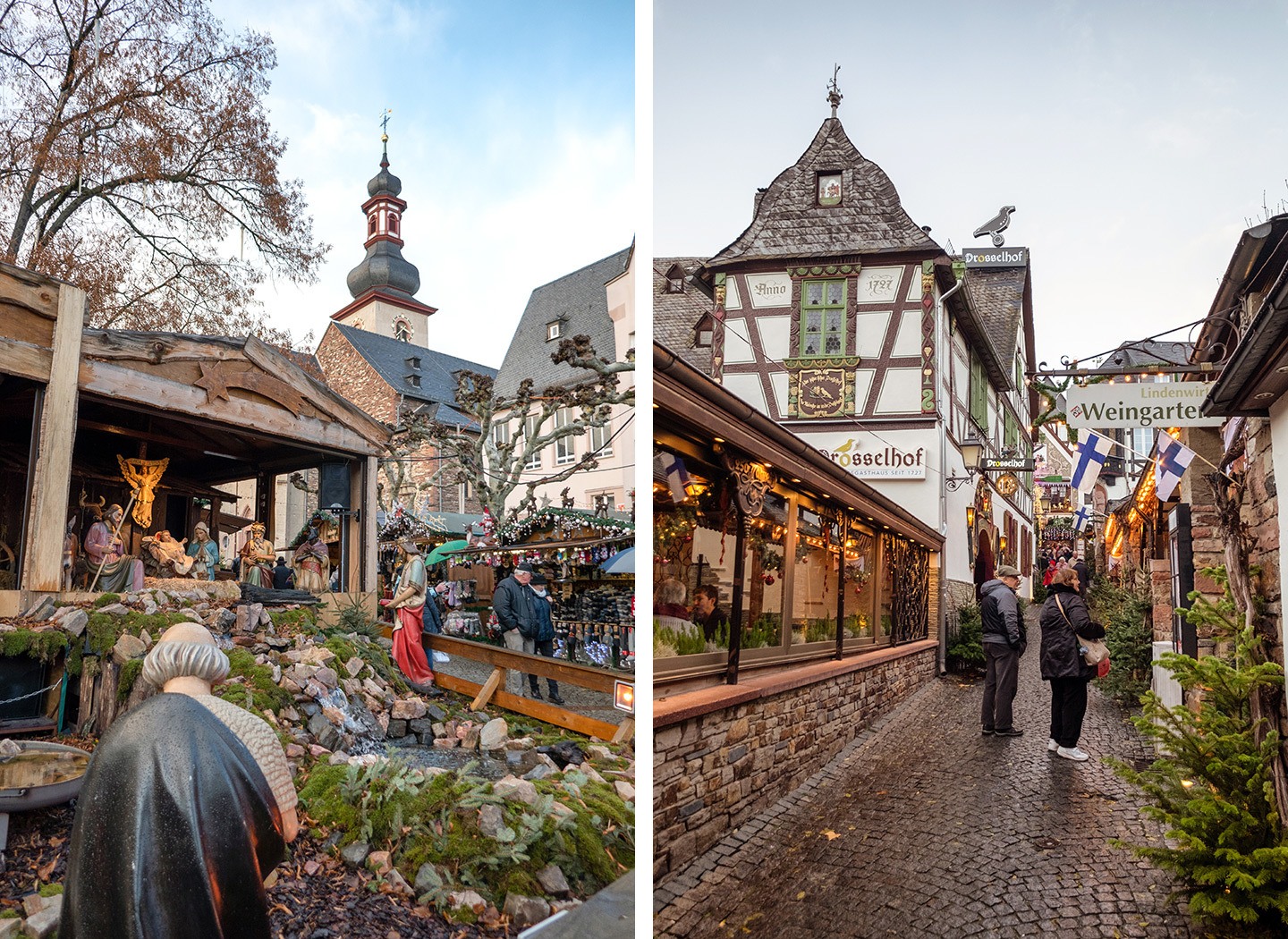 Our first stop was at Rüdesheim am Rhein – one of the Rheingau’s top wine towns. It’s also known for its mechanical music museum and the tiny bucket-like cable cars which run over the vineyards to the Niederwalddenkmal monument overlooking the town. But in winter it’s transformed into a winter wonderland. Christmas market stalls stretch out from the river into a maze of side streets and at the heart of it all is pretty Drosselgasse – like something straight out of a Christmas card with its cobbled streets, lanterns and half-timbered houses.

At first glance it seems like a traditional German market – from the life-sized nativity scene to the wooden chalets – but there are a few quirky touches thrown in. Like Christmas trees made from offcuts of old vines and piles of wine crates as a nod to its wine-making history. And its ‘market of nations’ with representatives from 20 different countries, so you might well spot Scandinavian smoked fish and cloudberry jam next to the bratwurst. 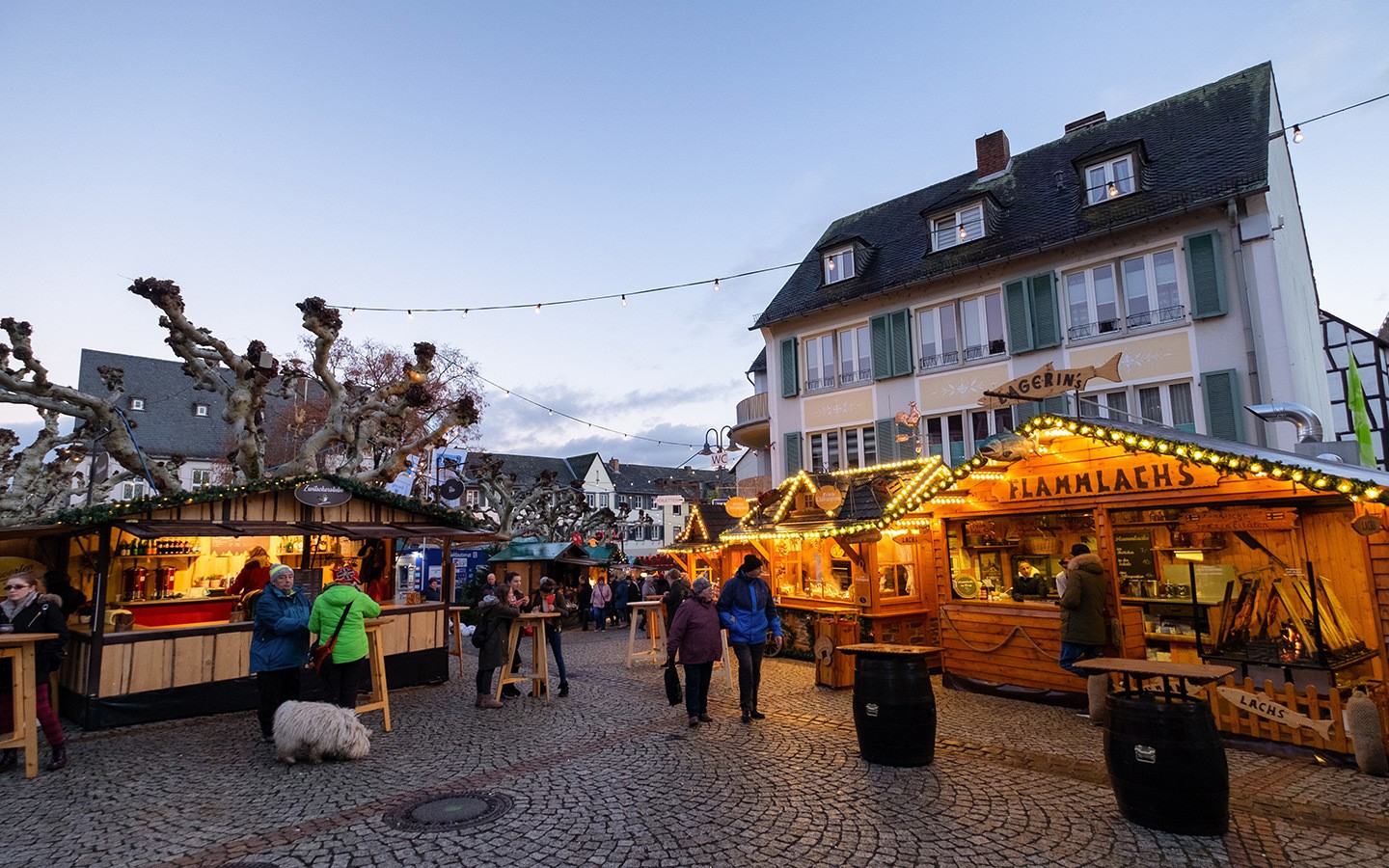 One of my favourite features was the little courtyards tucked away off the main pathways. Peer through an arched doorway and you’ll find a winter grotto festooned with candles and fairy lights. In summer they’re weingartens where people gather for a glass of Reisling, but in winter you can warm up with a blanket and a Rüdesheimer Kaffee. This local specialty was only created in the 1950s by a German TV chef, but it quickly became a Rüdesheim icon.

Strong black coffee is mixed with sugar and Asbach Uralt brandy, then topped with cream and chocolate flakes. It’s winter rocket fuel – guaranteed to keep you warm on a cold winter’s night. And to go with your coffee, grab a Baumstriezel or chimney cake. These are made with a sweet dough wrapped around a spit, covered in sugar and roasted over charcoal until crispy and caramelised outside. If you stop off at Drosselhof Stübchen you can see them being made. 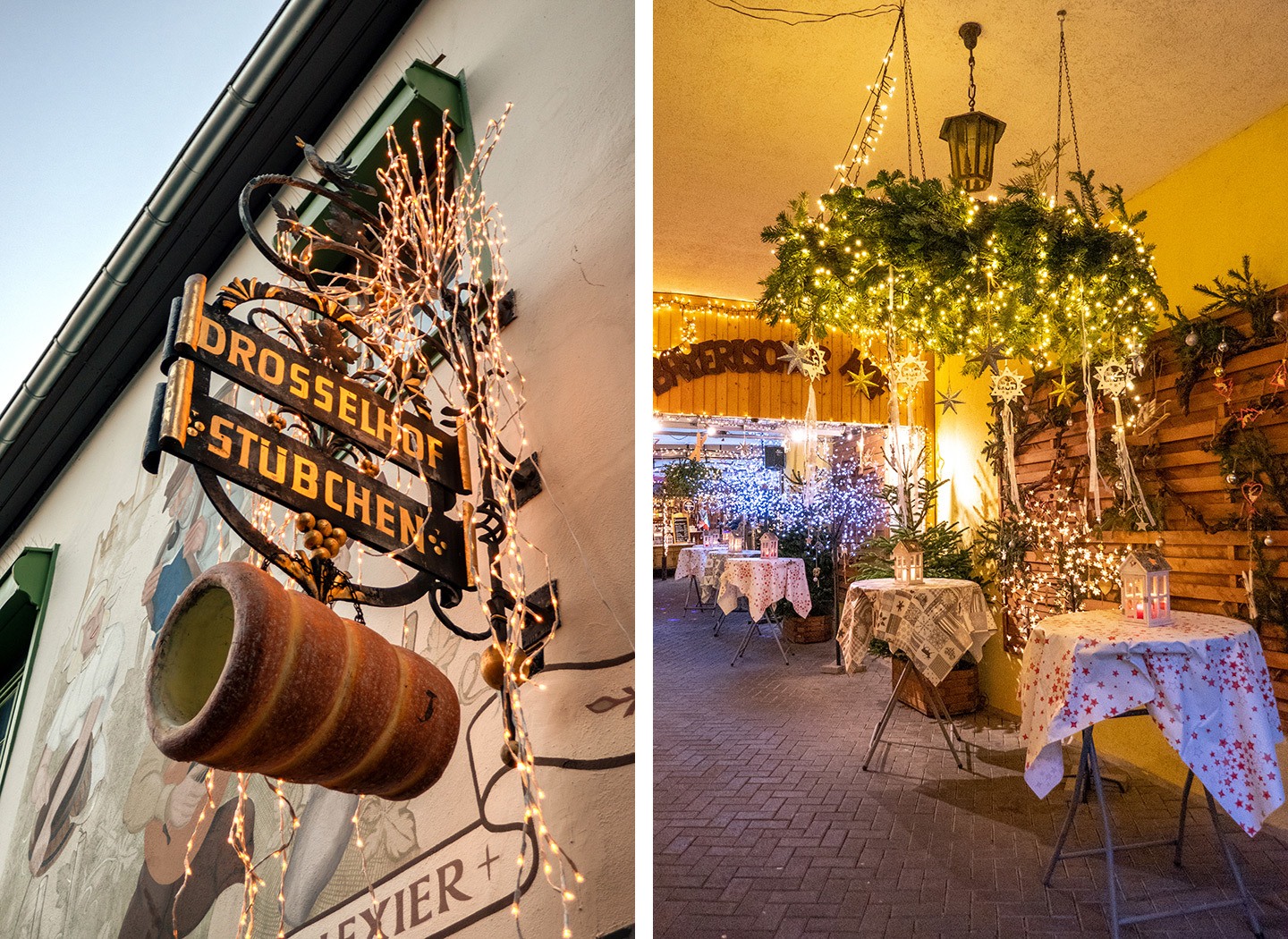 Next morning we cruised on along the Rhine to the German city of Mainz. I missed out on a visit in autumn for their wine festival because I was ill, but Mainz gave me a second chance to see it in its full festive finery. The Christmas celebrations centre around Mainz’s cathedral, which towers over the city centre. The Mainzer Dom is a mix of architectural styles, with a bit of Romanesque, a bit of Gothic and a bit of Baroque added over the years. Though it’s lucky to be there at all as the first two cathedrals on the site burn down before they were consecrated.

Our guide took us through the pedestrianised streets of the Aldstadt (old town), whose historic buildings were dressed up for Christmas with swathes of greenery, lights and baubles. She effortlessly switched between French and English as she told us stories of the city’s history from its early days as part of the Roman Empire, through occupation by France and onto the wartime bombing which flattened half the city centre but managed to miss the cathedral. 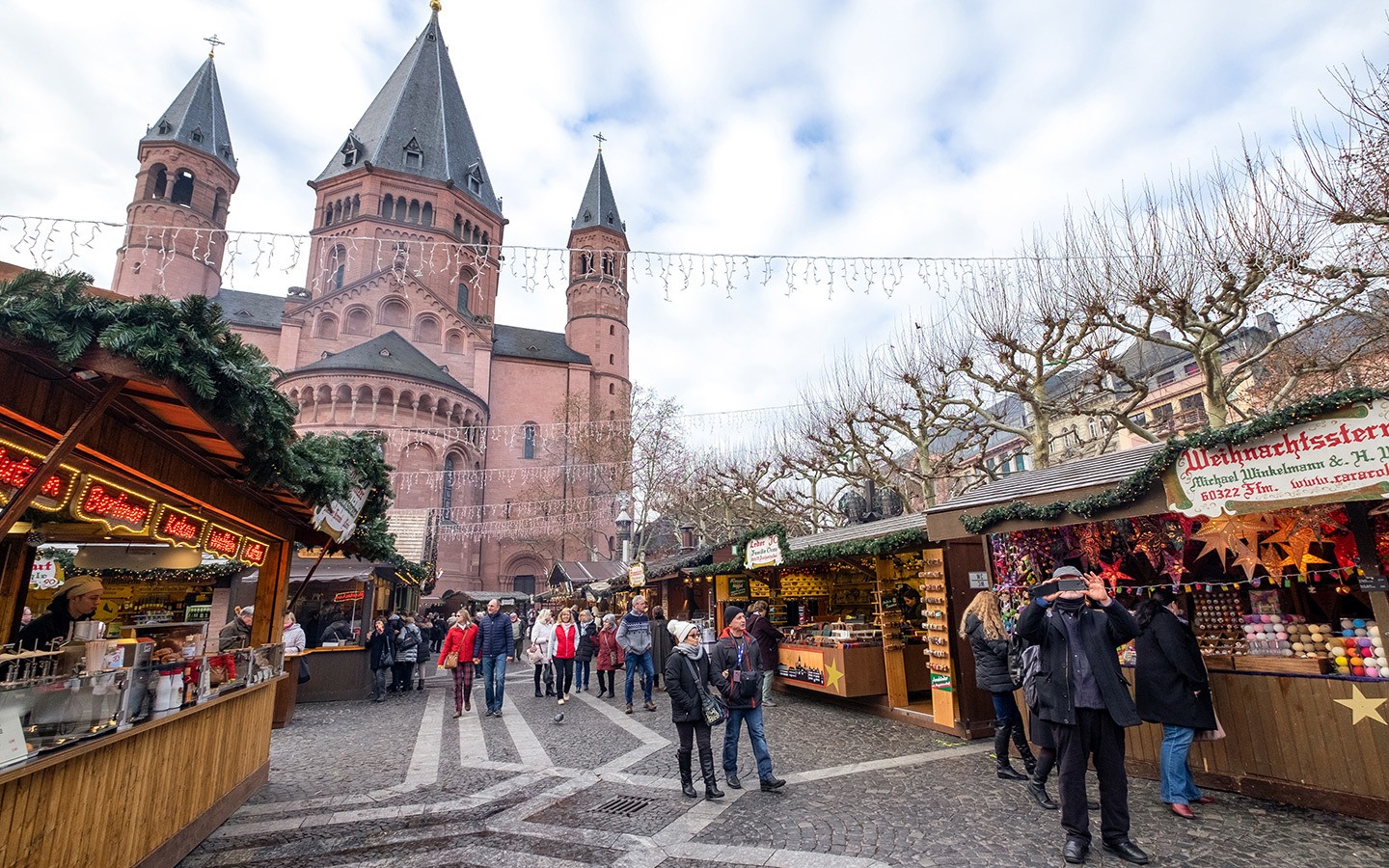 The market beneath the Mainzer Dom

Mainz’s most famous resident is Johannes Gutenberg, the 15th-century inventor who designed the first printing press. It’s him we have to thank for opening up knowledge to ordinary people by making books quicker and cheaper to produce. The Gutenberg Museum tells his story and has two of his original Bibles on display. Another of Mainz’s claims to fame is its wine. It’s one of just nine Great Wine Capitals around the world recognised as top wine destinations.

But at this time of year there’s only one wine I’m interested in – Glühwein. Mainz’s Christmas market is traditionally German, with carved decorations, sweets, biscuits and all the types of sausage you could ever want. Among the stalls we came across a circle of mini wooden cabins which you can reserve for your Glühwein gathering. Or there’s always the open fire, with pretty earthenware Glühwein mugs making a change from usual Christmas market china. 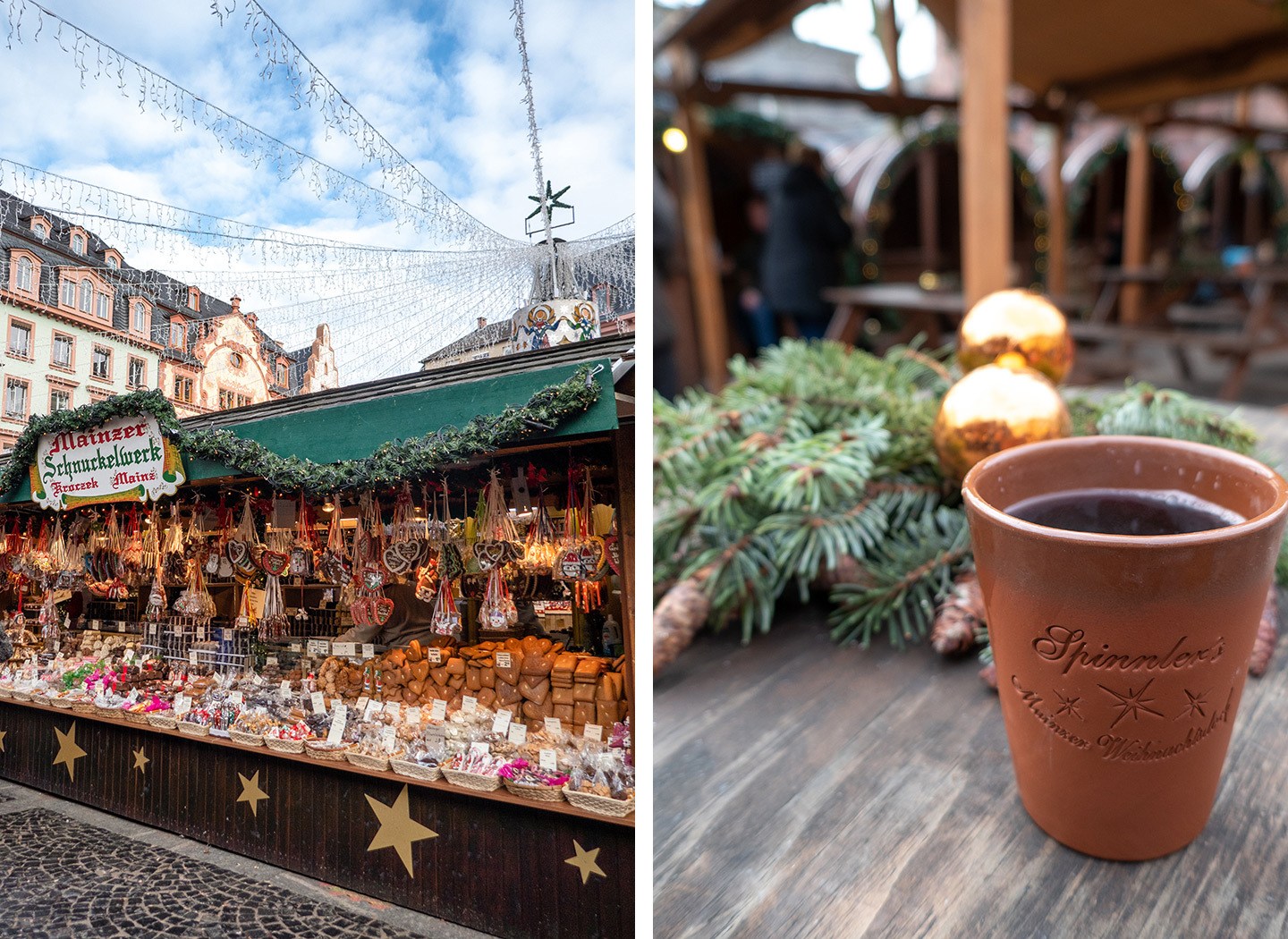 Day 3: Lalique and Strasbourg (or Obernai)

After sailing all night, we crossed the border into France’s Alsace region for our final festive stop. This part of the country has been passed back and forth between France and Germany over its history, creating a unique culture that mixes up the two and adds a few extras of its own. On board ship we made traditional bredele biscuits and learnt about traditions like the not-at-all-scary, whip-weilding Père Fouettard – the anti-Santa who deals with any naughty children.

After landing in Gambsheim we left the river behind and headed inland to Wingen-sur-Moder and the Musée Lalique. This museum is dedicated to 1920s glass designer René Lalique and features his beautiful Art Deco and Art Nouveau designs (including some gorgeous crystal tree decorations which unfortunately wouldn’t last 10 minutes with my cats around). 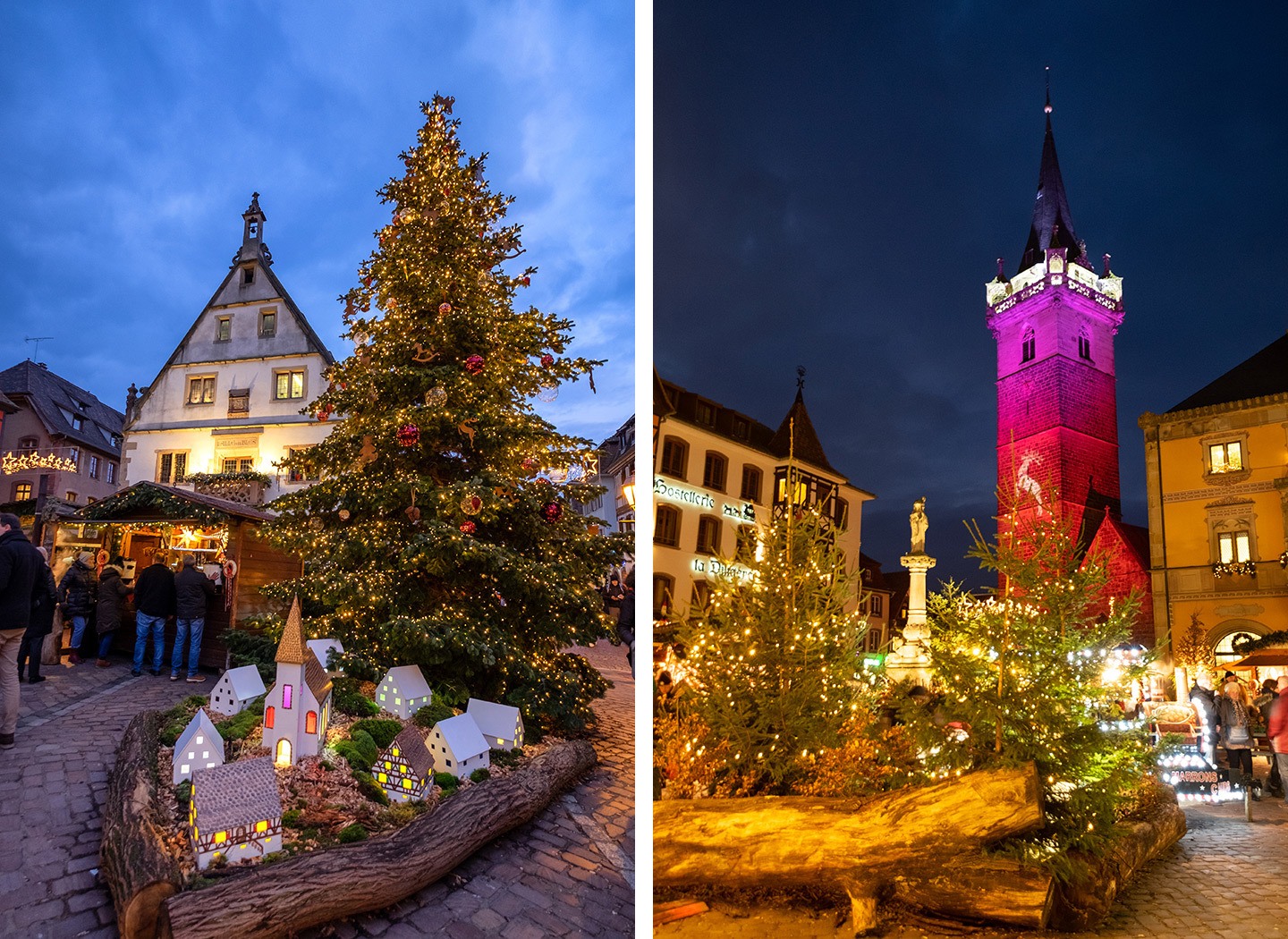 From there we were due to head back to Strasbourg to explore its famous Christmas markets, but a terrible shooting a few days earlier meant the market was closed and the city in mourning. So instead we took a diversion to nearby Obernai. I’d never even heard of this Alsace town but discovered a beautiful spot packed with medieval buildings all painted different colours. It’d be a pretty place at any time of year, but the local residents go all out for Christmas.

Every house had decorations draped from its windowsills, with teddy bears and Santas in among the usual lights and garlands. Carousels, Christmas trees and model villages mixed in with the stalls added an extra touch of festive magic. And as snowflakes started to fall – right on cue – I felt like I’d been transported into a Christmas movie. The Rhine region really does do Christmas like nowhere else, and a Christmas market river cruise is a great way to experience it. 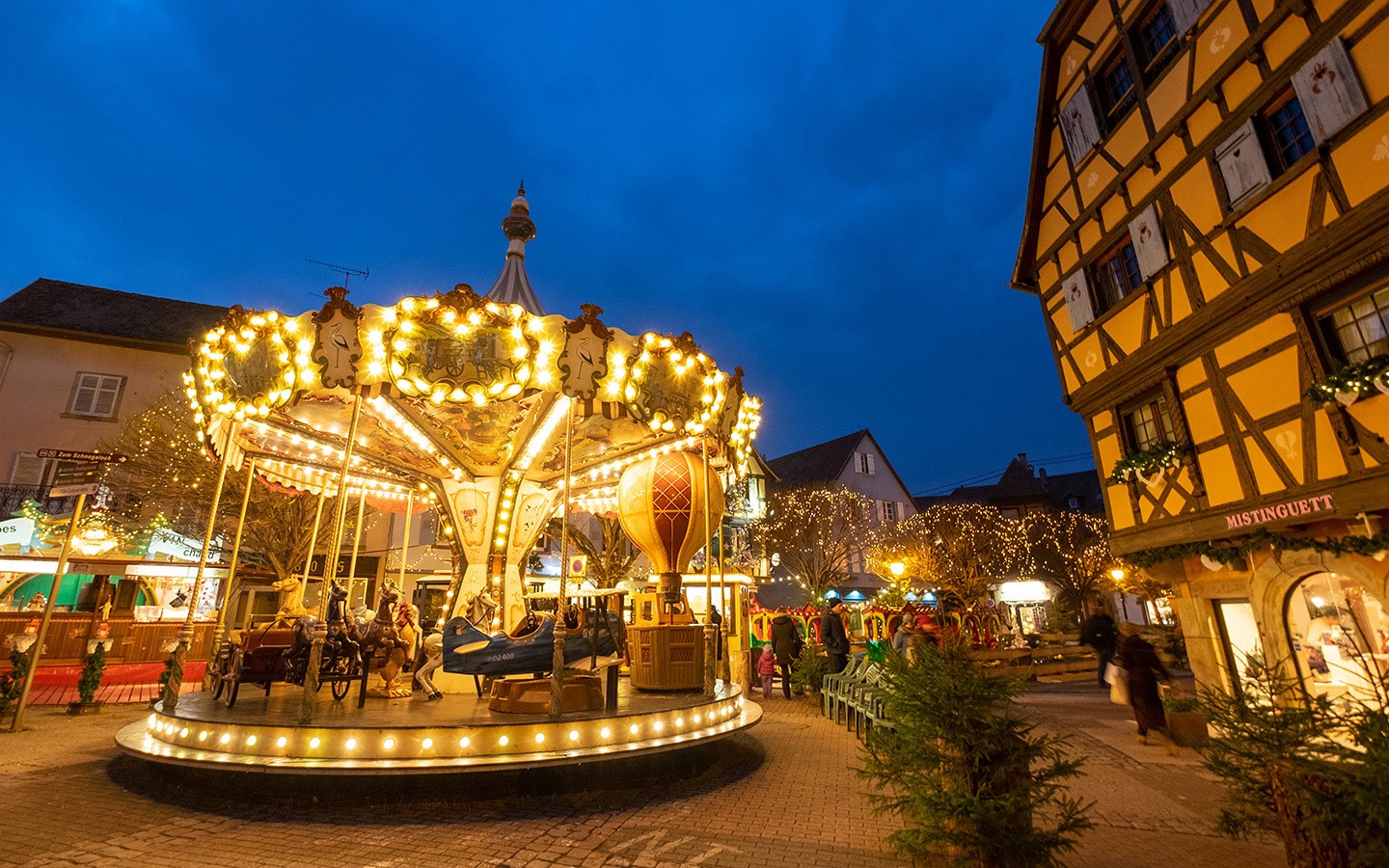 Our four-night Magic of Christmas Rhine river cruise with French company CroisiEurope cost £662 per person, departing from Strasbourg on the MS France and sharing an en-suite twin cabin. All meals (breakfast, three-course lunch and four-course dinner), drinks and excursions were included (with visits to Rüdesheim’s mechanical music museum, Mainz’s Gutenberg Museum and city walking tour, and a coach trip to the Lalique Museum and Obernai).

Read more: What’s it like on a CroisiEurope river cruise? 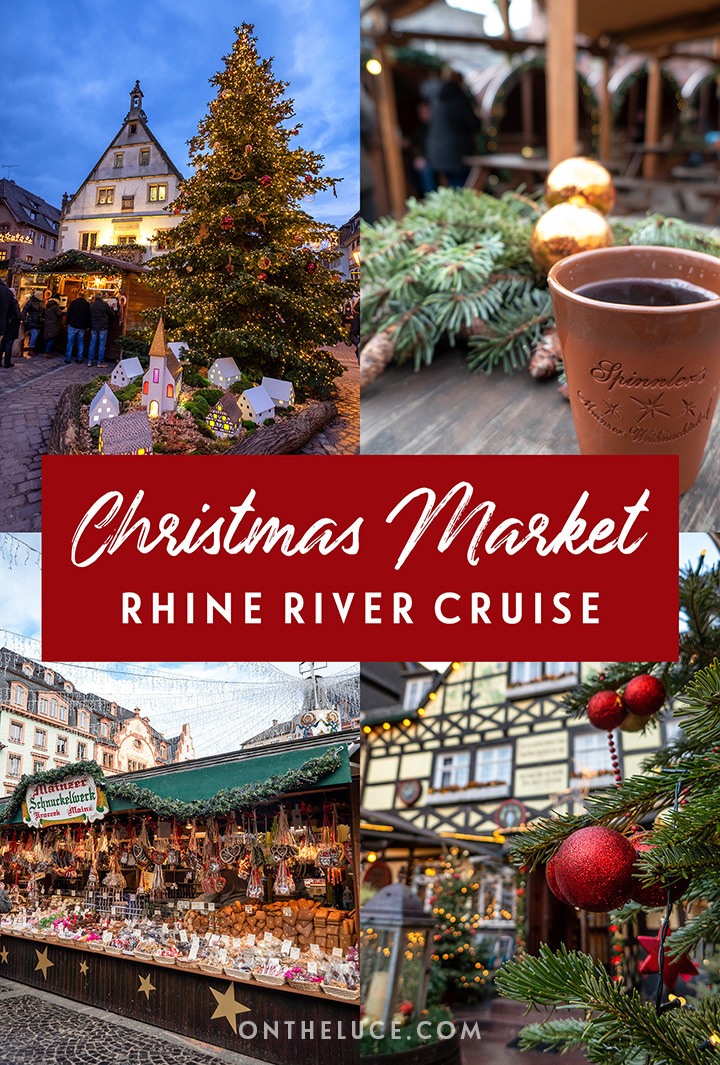 Sounds amazing! Rhine Cruise is on my list of must do’s. Was it too cold this time of year? With COVID I wonder if it would be as magical? Thanks for sharing this!

We went in early December and it was pretty cold – you needed a scarf, hat and gloves, especially in the evenings, but we didn't get any rain and there are lots of places to go inside and warm up if you need to. It does seem that a lot of the Christmas markets are not running or are running on a smaller scale this year but I guess the bonuses would be that it'd be a lot quieter and the decorations should still be lovely!

Wow! I love Christmas markets especially from little towns. Seemed like a very nice tour and the pictures are beautiful.

Thanks, it was really festive!

This cruise sounds like a great way of seeing several Christmas markets and relaxing at the same time. And no driving would mean I could indulge in the gluhwein ;-)

There was definitely a gluhwein or two involved – would be rude not to!

Would love to visit Mainz and that town of Obernai looks so pretty! Rüdesheim is such a quaint place, though my only memory is from a school trip I did to the Rhine Valley when I was 14. I’m sure I’d have an even better experience now, lol....

I didn't know this area at all but it's so pretty – and super festive at the moment!

Looks like a very festive way to spend a few dark days in December to brighten things up. The towns you visited are so pretty and the photos so festive. I'm looking forward to hearing about the food offered on your river cruise.

It was so lovely and festive – we were definitely in the Christmas spirit by the end of the trip!