The Cinque Terre is a picturesque stretch of the Italian Riviera known for its cliffs and coastal towns. But how much does it cost to visit the Cinque Terre? This budget breaks down the costs of a five-night trip.

A string of car-free coastal villages with pastel buildings spilling down the hillside, harbours of clear blue water and steep slopes covered in vineyards – over the last few years Italy’s Cinque Terre has become one of Europe’s top wishlist destinations. With the sun shining, a plate of seafood and glass of prosecco in front of you, it’s not hard to see why.

But an influx of visitors often means a rise in prices to go along with it. So does the cost of visiting the Cinque Terre match its popularity? Here’s my budget breakdown for a five-night Cinque Terre trip, which shows how much it cost for accommodation, transport, activities, food and drink to help you plan your own trip.

Note: these costs are based on my mid-range travel style – keeping costs down where I can to splash out on special experiences. This post was first published in 2018 but prices have been updated where possible to costs as of August 2022.

What does accommodation in the Cinque Terre cost?

Accommodation is the biggest expense in the Cinque Terre. The small size of the villages means demand can exceed supply, especially in the summer when you can easily pay €150 a night for a standard double room. Though one way to save money is by staying in neighbouring Levanto or La Spezia, both of which are easily accessible by train.

We wanted to be at the heart of things, so booked the one-bedroom BILO3 Vista Mare apartment in Corniglia. There are only a few hotels in the Cinque Terre which are mainly in Monterosso and Riomaggiore, so accommodation is mostly apartments or guesthouses.

Corniglia tends to be slightly cheaper than the other villages as it’s more difficult to access – with no ferry services and a long climb up 380 steps from the train station to reach the village (though there is also a shuttle bus if you don’t mind queuing).

Our apartment slept four and was compact but well designed, with an open-plan kitchen/diner/lounge with sofa bed, separate bedroom, bathroom and small balcony, as well as a shared roof terrace where we spent most of our time. It cost €836/£704/$856 for four people for five nights in late May (including the AirBnB fees).

There’s also a Cinque Terre tourist tax between 1 March and 31 October which costs €2 per person per day. It’s capped at three days though so we paid €6 each for five nights.

How much is transport in the Cinque Terre?

The Cinque Terre is a National Park and cars are restricted to residents only, so the easiest way to get to and around the region is by train. We travelled to Italy from the UK by train using an InterRail* pass as part of a longer European rail trip. But the train to the Cinque Terre from the nearest airport in Genoa takes 60–90 minutes and costs €11.

Frequent trains run along the Cinque Terre line from La Spezia to Levanto throughout the day, which stop off at each village and cost €5/£4/$5 for a single journey, irrespective of how far you travel. So it’s easy to walk one way and take the train back.

Our trains were covered by the Cinque Terre Card (see below) on one day, but we also took five single journeys over the other four days, costing €25/£21/$26 in total.

The other way to get around the Cinque Terre is by ferry – with some great views along the way. We didn’t use it that much as Corniglia is the only village without a harbour, so it doesn’t stop there. But we did take a day trip down the coast from Manarola to Portovenere which cost €28/£24/$29 for an afternoon return ticket, valid after 12pm.

What’s the price of activities in the Cinque Terre?

The main reason most people have for visiting the Cinque Terre is to soak up those amazing views, go hiking and take a dip in the sea, none of which is going to cost much.

You do need to buy a Cinque Terre Card if you’re going to walk the Blue Trail (Sentiero Azzurro) coast path from Monterosso to Corniglia (the route on from Corniglia to Riomaggiore is closed after the 2011 landslide). A one-day pass costs €7.50 and also covers local buses, wifi and toilets. But we upgraded to the one-day Cinque Terre Train Pass for €18.20/£15/$19 which also includes unlimited train travel on the Cinque Terre line.

We also hiked along the hillside path from Corniglia to Riomaggiore, which is free to access. And we took a boat trip to Portovenere (listed under transport) and paid for entry to the castles in Vernazza (€1.50/£1/$1.50) and Portovenere (€5/£4/$5).

What does food and drink cost in the Cinque Terre?

Food and drink is where the Cinque Terre starts to get a bit more expensive again – prices are around a third higher than you’ll find in less-touristy parts of Italy. And since the villages are busiest in the daytime you don’t usually find cheap lunchtime deals either.

So to keep our costs down we mixed up eating out and cooking some meals in our apartment. We spent €85/£72/$87 on groceries between the four of us. That covered breakfast every day, snacks and two simple pasta dinners.

There aren’t any large supermarkets in the Cinque Terre, so if you’re self-catering you’ll need to buy groceries at the smaller village stores which can be more expensive – or otherwise you could stock up in La Spezia or Levanto which have more facilities.

We also ate out for lunch three times and dinner twice, and got takeaway pizzas in Corniglia on our last night, coming in at a total of €120/£101/$123 per person.

An average lunch or dinner out at a casual Cinque Terre restaurant with one course and a glass of wine cost around €18/£15/$18. I’d always leave room for gelato too – we were right by an amazing gelato shop so tried a new flavour each night (total €10/£8/$10).

We went out for a few Aperol Spritzes and bought some wine to drink on our balcony (€37/£31/$38 per person). Bottles of wine from a local vineyard cost around €6 and a large beer €3.50, though prosecco was fairly pricey for Italy at €10 a bottle (the cost of a bottle of bubbly around the world is my version of the consumer price index!).

The tap water in the Cinque Terre is fine to drink and there are water fountains in each of the villages so we took refillable water bottles to cut down on costs and plastic waste.

It’s not a bad price for a wishlist destination like the Cinque Terre, though would be much higher in the summer. You could probably squeeze the trip into a day or two rather than staying for five, but it doesn’t cost too much extra to stay longer – there are often accommodation deals, you have time to self-cater and walk the free paths.

Lower budget? You could save money by staying in Levanto or La Spezia instead, where there’s a greater choice of accommodation and more budget options. You could also cook more of your own food and stock up on groceries before arriving.

Higher budget? If you want to splash out, there are some gorgeous apartments with private roof terraces – or several five-star hotels* just outside the Cinque Terre. You can also take a private boat trip* along the coast and eat at high-end restaurants.

Looking for somewhere to stay in the Cinque Terre?* 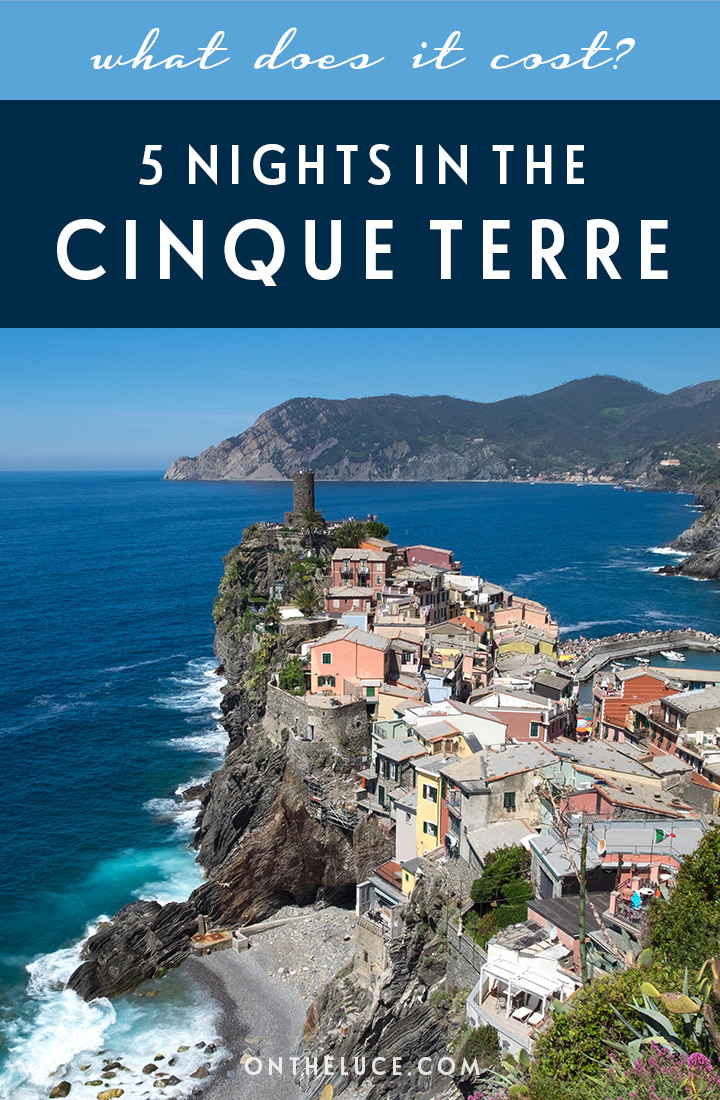 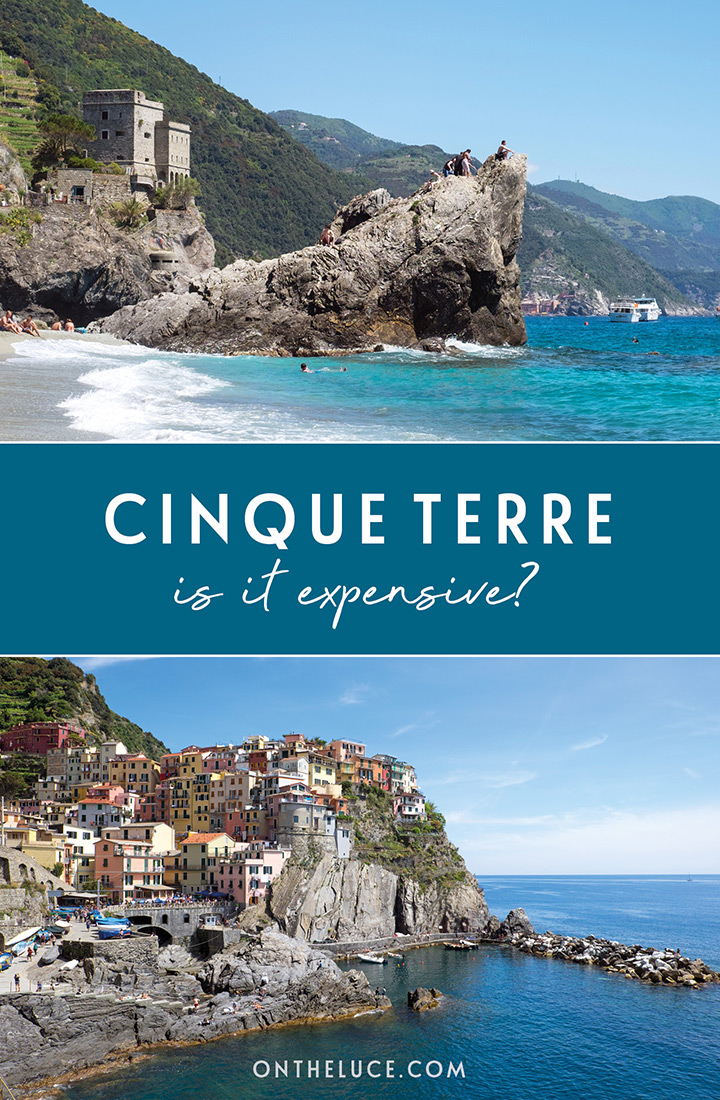 A guide to Corniglia: The quiet heart of Italy’s Cinque Terre

Hi Lucy! Thanks for the amazing information on Cinque Terre in both your articles. Read a few blogs lately but they didn't give much info on the trails. I am going there for 5 days from 4th Sept to 8th Sept and hopefully I can discover as much as you did if not more. I have a question regarding money, I mean did you carry a lot of cash or you found ATMs in/around the villages. Are there many places that take debit cards for payment?

Hi, great to hear the posts were useful! Money-wise we found that most larger restaurants took credit cards, debit cards are a bit less common though. But there are bank ATMs in each of the villages, plus smaller ones outside some shops (these can charge higher commission though so best use the ones attached to a bank if you can).

Would it be okay to visit in the off-season? By November or December?

Hi Chelsea, it can be a bit wet in the winter which means some of the paths might be harder to get around. If you get sunny weather though it should be uncrowded though and prices should be lower.