Set in the shadow of the Sangre de Cristo Mountains, Santa Fe is one of the oldest cities in the USA, with a distinctive southwestern look thanks to a mix of Native American, Spanish and Mexican influences though its history. Santa Fe’s creative, artistic community, great food and drink and laid-back feel have seen it christened the ‘city different’, and it makes a great city break. But with only a day to spare before my flight home, it was time to see what you can do with one day in Santa Fe, with a 24-hour itinerary of its highlights.

Things to do in Santa Fe in one day

Start your day in Santa Fe in the Plaza, the historic heart of the city. The Plaza has been a gathering place for people to stroll, meet and relax in the sunshine for hundreds of years. It’s surrounded by terracotta-colored adobe buildings, which are made of a mixture of sun-dried earth and straw. Today they’re home to museums, galleries, shops and restaurants.

Among them are the Palace of the Governors – the oldest public building in the USA. The palace was built for the first Spanish royal governor of New Mexico in 1610 and was the seat of the state government for centuries. Today part of it is used by the New Mexico History Museum (open from 10am), where you can find out more about the state’s past, from the Ancestral Puebloans to the Spanish, the Wild West era to 1960s hippie communes.

And alongside the building is a shady portal where you’ll find Native American vendors selling handmade leather goods, textiles, art and silver and turquoise jewellery. You can meet the artists and hear the stories of the culture and history behind their works.

11am: Visit the city’s churches

Santa Fe isn’t all about the adobe, the city also has some grand churches which have a much more European feel. Saint Francis Cathedral (or the Cathedral Basilica of Saint Francis of Assisi to give it its full name) was built in 1869 in Romanesque style for Santa Fe’s French Archbishop. Inside are impressive stained glass windows and bronze cast doors.

Or there’s the Gothic-style Loretto Chapel – which was apparently inspired by Sainte-Chapelle in Paris. It was built in 1878 and is famous for it’s ‘miraculous staircase’. The story goes that when the chapel was being built, there wasn’t space for a normal staircase and none of the local stonemasons knew how to build a spiral staircase.

So the nuns prayed to St Joseph for help. And nine days later, a mysterious travelling carpenter arrived, built the staircase and disappeared before anyone could thank him. The staircase is still there today, and with no visible supports it’s a mystery how it stays up. The chapel’s now a museum so you can go and take a look to work it out for yourself.

Next head away from the Plaza for the short walk to Santa Fe’s redeveloped railyard district. This part of the city had fallen into disrepair after the train route through town stopped running. But instead of knocking down the old warehouses they’ve been converted into galleries, art stores, restaurants and a huge farmers’ market selling local produce.

Take a stroll around the park, which incorporates reminders of its past life with old railway tracks and train wheels along with native plants and trees. Then call into Cowgirl for lunch on the patio. This Western-inspired restaurant serves mesquite-smoked BBQ and southwest-style fajitas and quesadillas (with GF and vegan options) and tasty margaritas.

3pm: Get artistic on Canyon Road

With its mountain scenery and high-altitude clear light, Santa Fe has long a favourite with artists. Visiting its museums and galleries is one of the most popular things to do in Santa Fe. The city’s artistic heart is the half-mile-long Canyon Road, where you can check out over 80 art galleries and studios covering all different forms of art (and prices). Visitors are welcome to browse and can often chat to the artists or see the latest work in progress.

You’ll also find artworks dotted around the city – from mosaics and sculptures to street art. And if you want to dig a bit deeper into the Santa Fe’s arty side there are museums dedicated to folk art, Indian art and the painter Georgia O’Keefe. There’s also the quirky Meow Wolf, a immersive art experience with 70 interactive gallery rooms you can explore.

Finish off your day in Santa Fe by feasting on the city’s fantastic food and drink. If you’re a wine fan then head to the Gruet tasting room at the Hotel St Francis. New Mexico is surprisingly oldest wine-producing region in the USA, and Gruet make some great sparkling wines in their vineyards south of Albuquerque, which you can try out with a wine flight.

Or if beer’s more your thing, the Santa Fe Brewing Co is the city’s oldest brewery – their main brewery and taproom is located south of the city but you can also find their beers for sale in many local bars. Then have dinner at Tomasita’s. They serve Northern New Mexican cuisine, which means plenty of chillies – they’re New Mexico’s official state vegetable and you can choose whether you’d like yours red, green or ‘Christmas’ (a mixture of both).

If you’ve got more than a day in Santa Fe, then head to Museum Hill east of downtown where four of the city’s top museums are located – the International Folk Art Museum, Museum of Indian Arts and Culture, Museum of Spanish Colonial Art and Wheelwright Museum of the American Indian. The hill is also home to the Santa Fe Botanical Garden.

Or head out of the city to explore the surrounding countryside. Visit the ancient Taos Pueblo – the 76-mile-long High Road to Taos is one of the most scenic drives in the southwest USA, running through the Sagre de Cristo mountains past traditional villages, artist studios and the ‘Lourdes of America’ at Chimayo. There’s also the Rio Grande Gorge Bridge, with views 565 feet down into the canyon, and relaxing at the Ojo Caliente Mineral Springs spa complex.

Where to stay in Santa Fe

A short walk from the Plaza, the Old Santa Fe Inn* is a classic New Mexico style bed and breakfast – think handmade dark wood furniture, local artworks and bunches of dried chilies hanging in the courtyard. Rooms are cosy and comfortable, and some have traditional kiva fireplaces, jacuzzi baths or balconies. There’s a free breakfast buffet, including make your own burritos, plus free tea, coffee and afternoon snacks in the lobby.

Or for something a bit different, the gloriously over-the-top Inn of the Five Graces* is a riot of colours and cultures. The hotel has been created from a block of historic adobe buildings and has 24 luxury suites, each with a kiva fireplace and kitchenette. The East-meets-West décor is inspired by the Silk Road and features mosaic bathrooms, Afghan rugs, antiques and Indian fabrics. There’s also a spa, fitness room and a peaceful garden to relax in.

Looking for somewhere to stay in Santa Fe?* 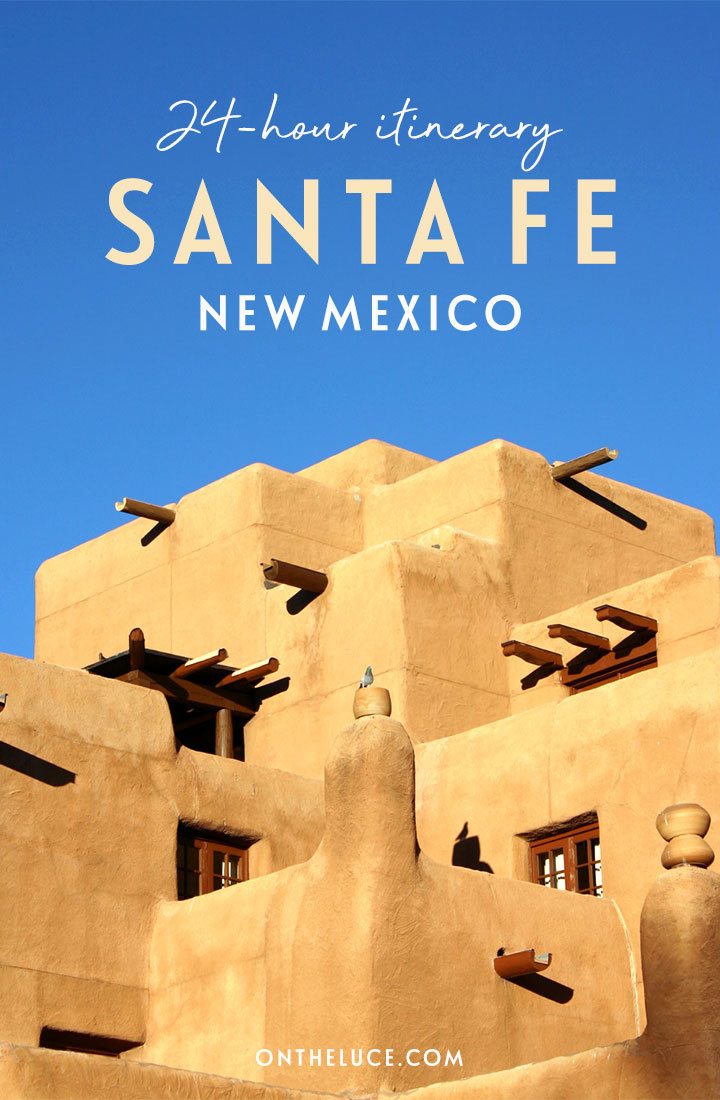 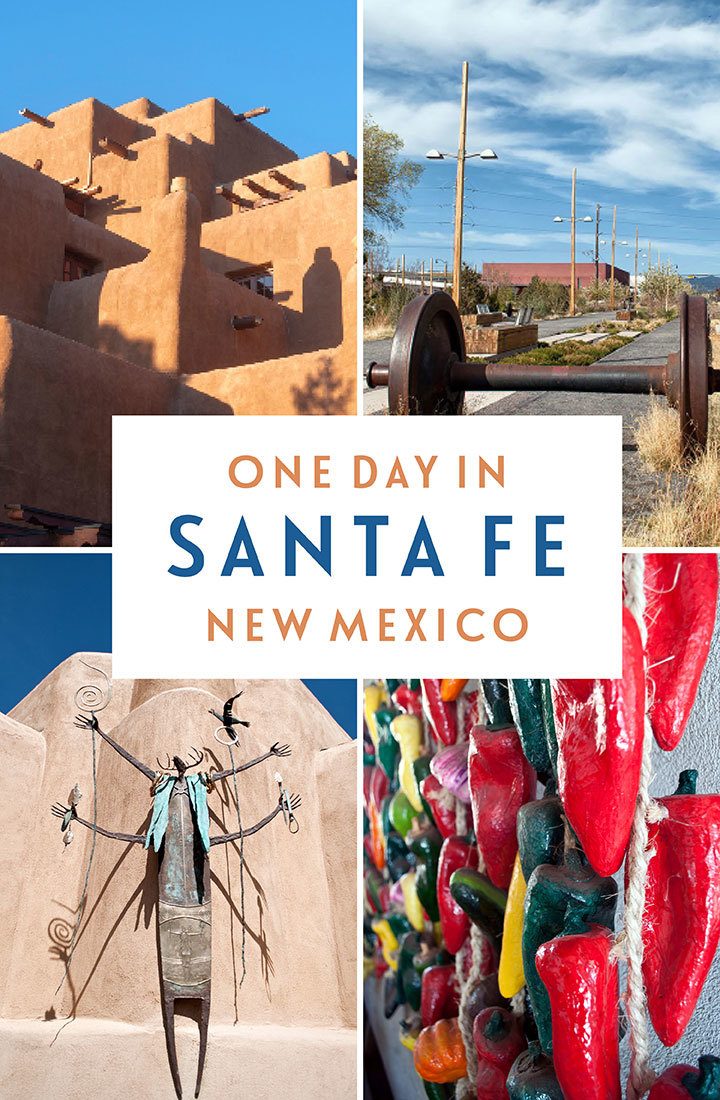 Lucy, Santa Fe looks like an exciting place to visit. If you were actually there for longer than a day, were there any memorable places to dine?

We enjoyed the New Mexican food at Tomasita’s but would also have liked to try out the Blue Heron and Sazon.

Nice blog , I am from Santa Fe born and raised and although there is so much more magic that this wonderful city has to offer, you really did an exceptional job. I literally found myself walking along your day plan. Good job.

Thanks Blaine, I really enjoyed my stay and hope to get back there someday!

Excellent review, Lucy. Question is how could you have left Meow Wolf off your list? It’s one of the most interesting exhibits happening in SantaFe. Please check it out.

Hi Peter, I did give it a quick mention but I didn't get chance to check it out myself unfortunately – it's top of my list for a a return trip though!

Lucy, we spent a few days in Santa Fe last summer and really enjoyed it. From strolling a few of the art galleries to savoring a bit of southwestern food (something we'd missed having been in Germany so long) it was a great trip. How long was your road-trip in all?

It's such a great place to just wander around and see what you come across. My road trip was two weeks and Santa Fe was near the end, after the National Parks in Utah and a couple of days in Colorado, then before heading over to Sedona and home from Phoenix. Had a really great trip and already planning another US trip next year.

Wonderful blog, Lucy! Glad you enjoyed your visit. You definitely need to visit again for a longer period so you can truly experience our art, culture, cuisine, and pristine nature!

Thanks so much! I had a really great time, only a shame that we didn't have longer to spend but it's high on the list for a return visit with more time for a proper exploration.