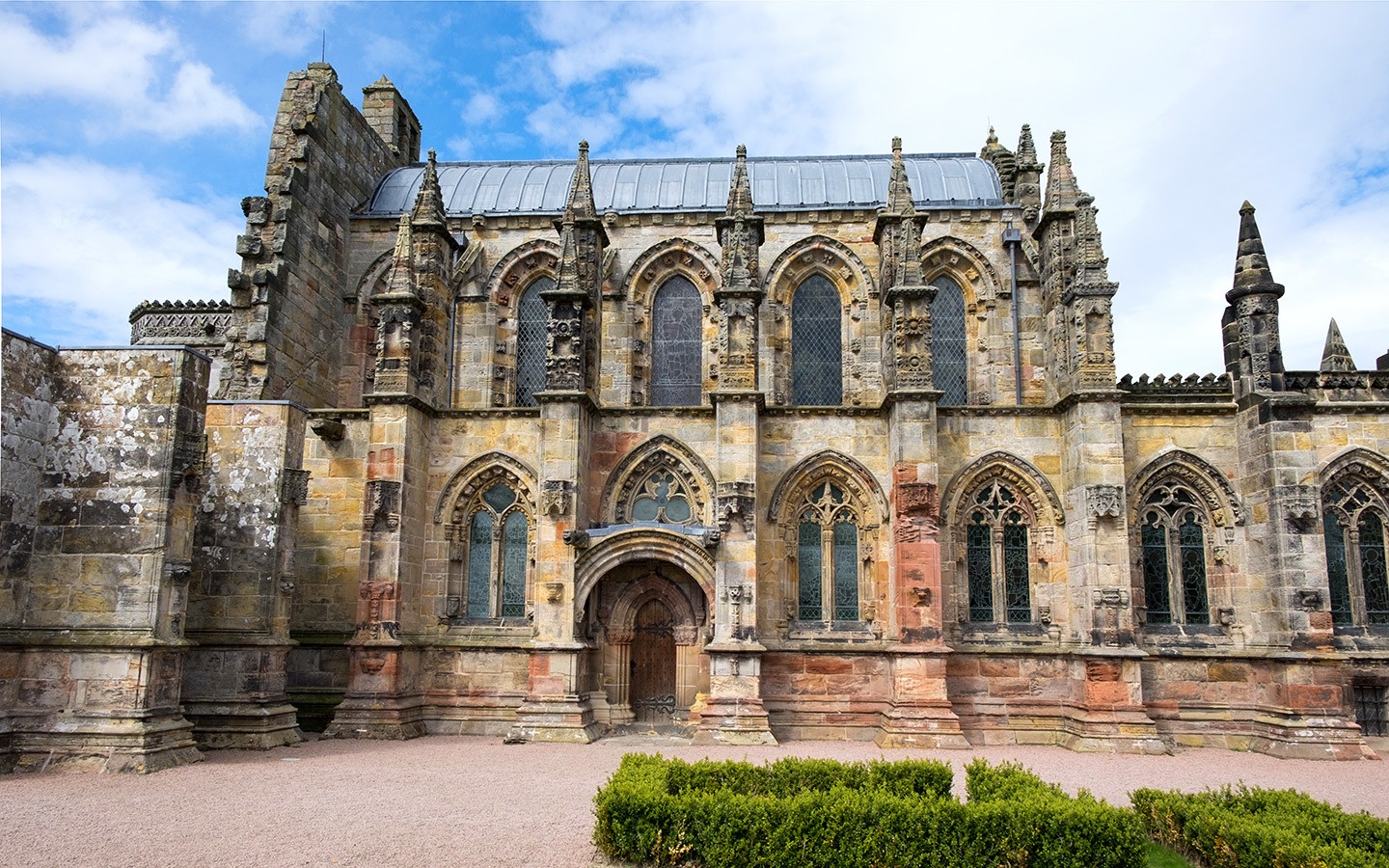 Chapels, historical mysteries and a celebrity cat – Rosslyn’s got all the ingredients for a perfect Edinburgh day trip. Located just a few miles south of Edinburgh’s city centre, Rosslyn (also known as Roslin)’s main draw is its beautiful 15th-century chapel. But it’s not just the chapel’s impressive architecture which draws people to visit Rosslyn, it’s the secrets and speculation about its origins, which have been fueled by a very famous 20th-century author. 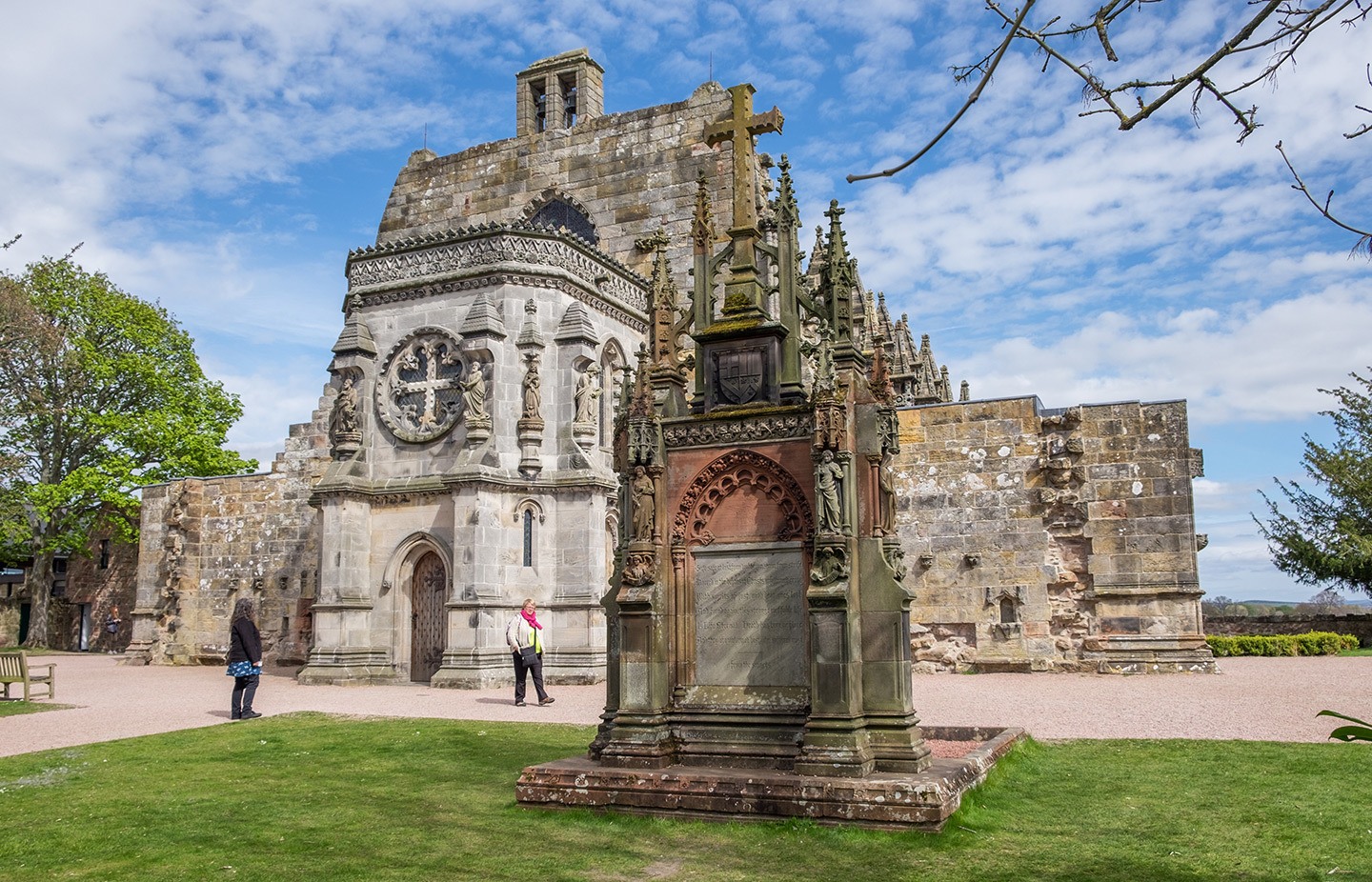 The history of Rosslyn Chapel

Rosslyn Chapel was the brainchild of nobleman William St Clair of Orkney, the 1st Earl of Caithness. He spent his mid-20s exploring Europe and developed a bit of an obsession with France’s Gothic cathedrals. So when he came back to Scotland in 1446 he decided to build his own version – the Collegiate Chapel of St Matthew, better known as Rosslyn Chapel.

William’s original vision was on a grander scale than what you can see today, with the chapel 34 metres longer and a giant tower visible from the centre of Edinburgh. William had plenty of money to fund his plans, and brought an army of master craftsmen from across the UK and beyond to work on his vision. The village of Roslin grew up around the chapel to house them all. 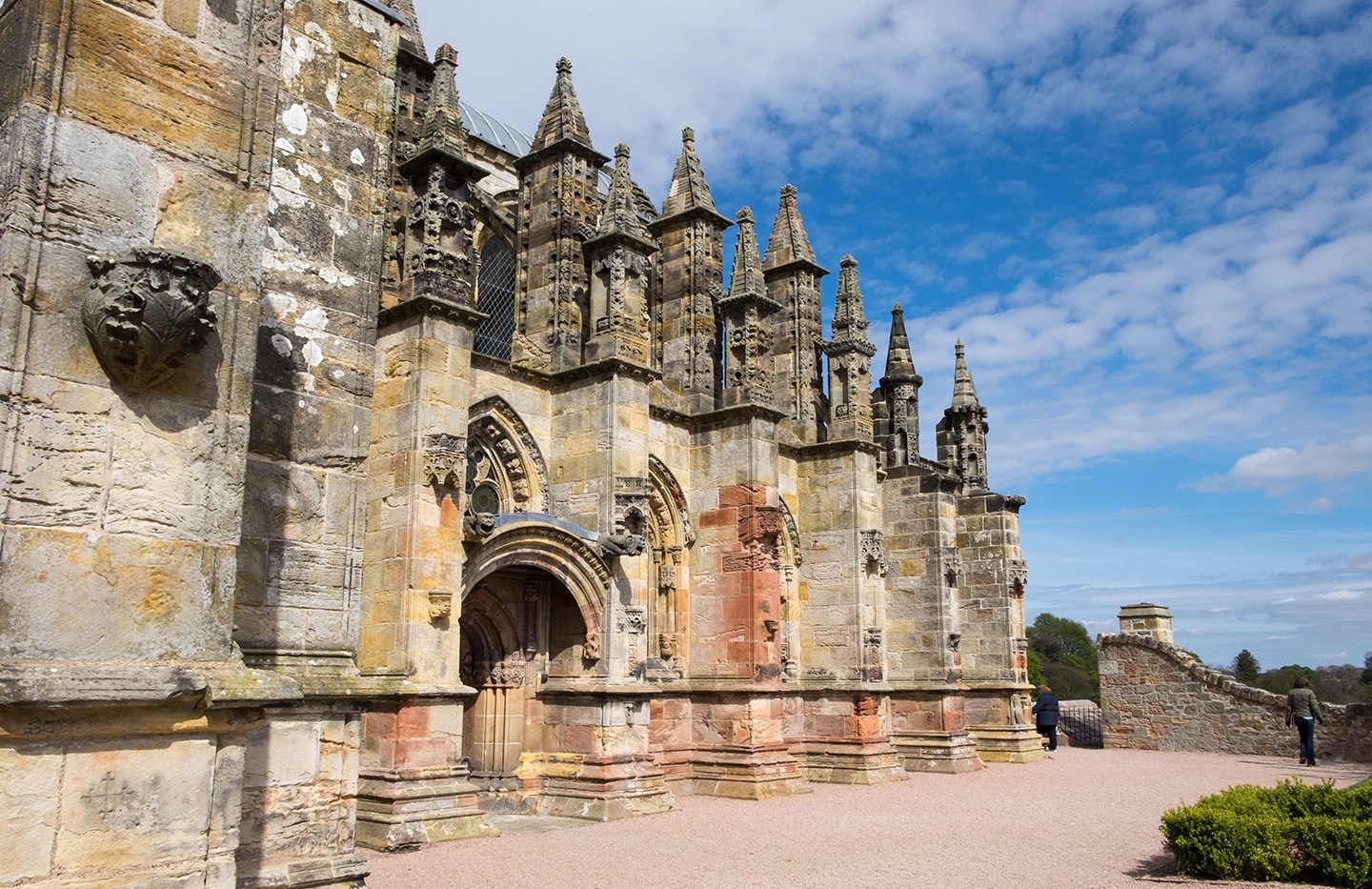 But 40 years later work still wasn’t finished on the chapel when William died, so he never got to see his creation come to life. Nor did anyone in the end. His son Oliver got the roof finished but abandoned William’s grand plans for towers and giant transepts.

William’s family were Catholics, so during the Scottish Reformation the chapel was damaged and statues were stripped out, leaving it empty. Being built totally from stone rather than wood helped preserve it for a while but it started to fall into disrepair over the years. The chapel was eventually reopened in the 1860s, but years of neglect and Scottish winters had left it in a sorry state. And some of the works to fix the damage only made things worse. 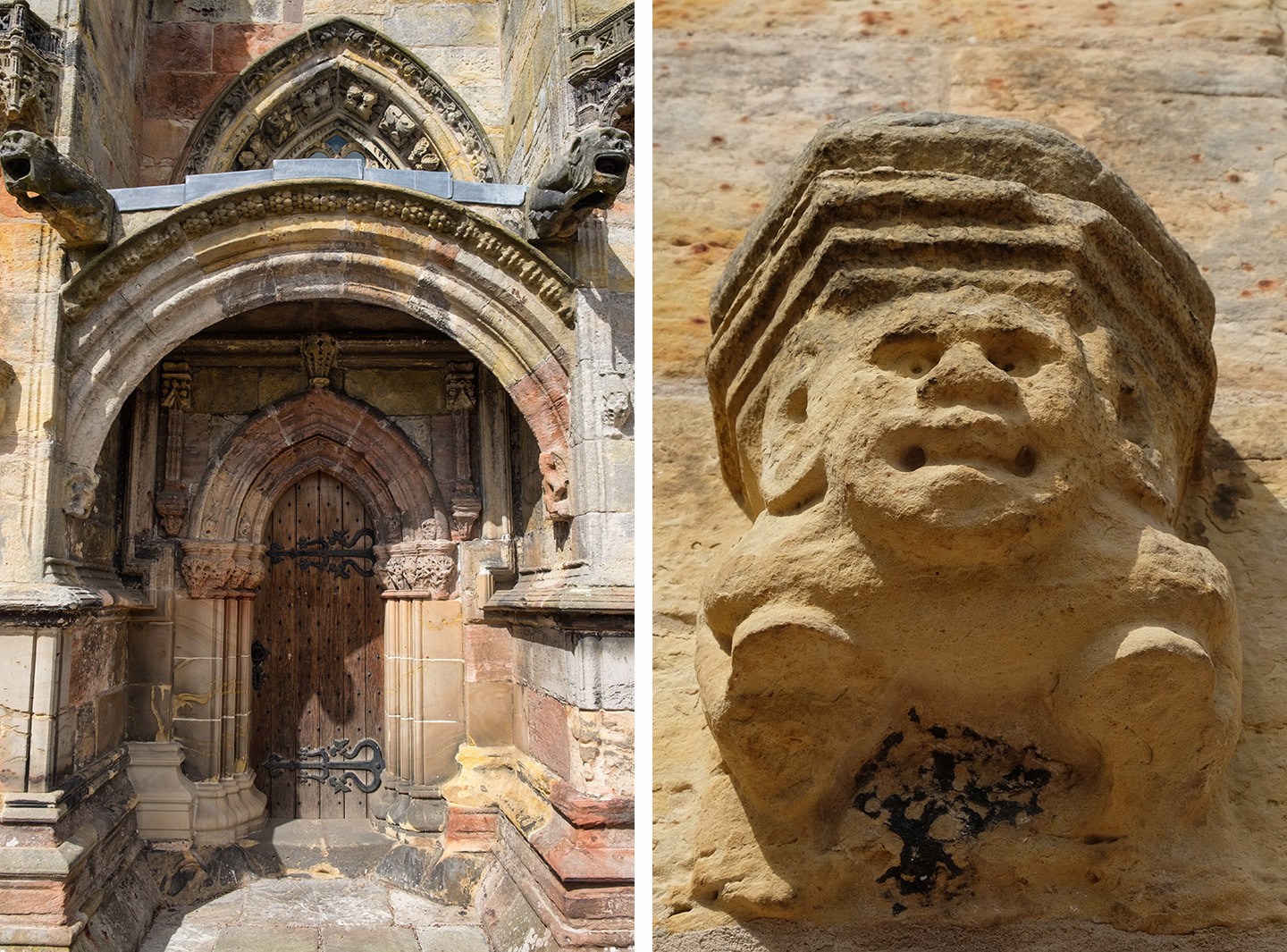 By the late 1990s, Rosslyn Chapel was in need of serious TLC. It was full of damp with algae covering the walls inside. So a massive project took place to dry it out, preserve what was left and restore what had been damaged. A huge steel canopy was built right over the top of the chapel to protect the roof while it was repaired, loose mortar was replaced and the carvings, stained glass and organ were restored. And now the chapel is looking as good as ever. 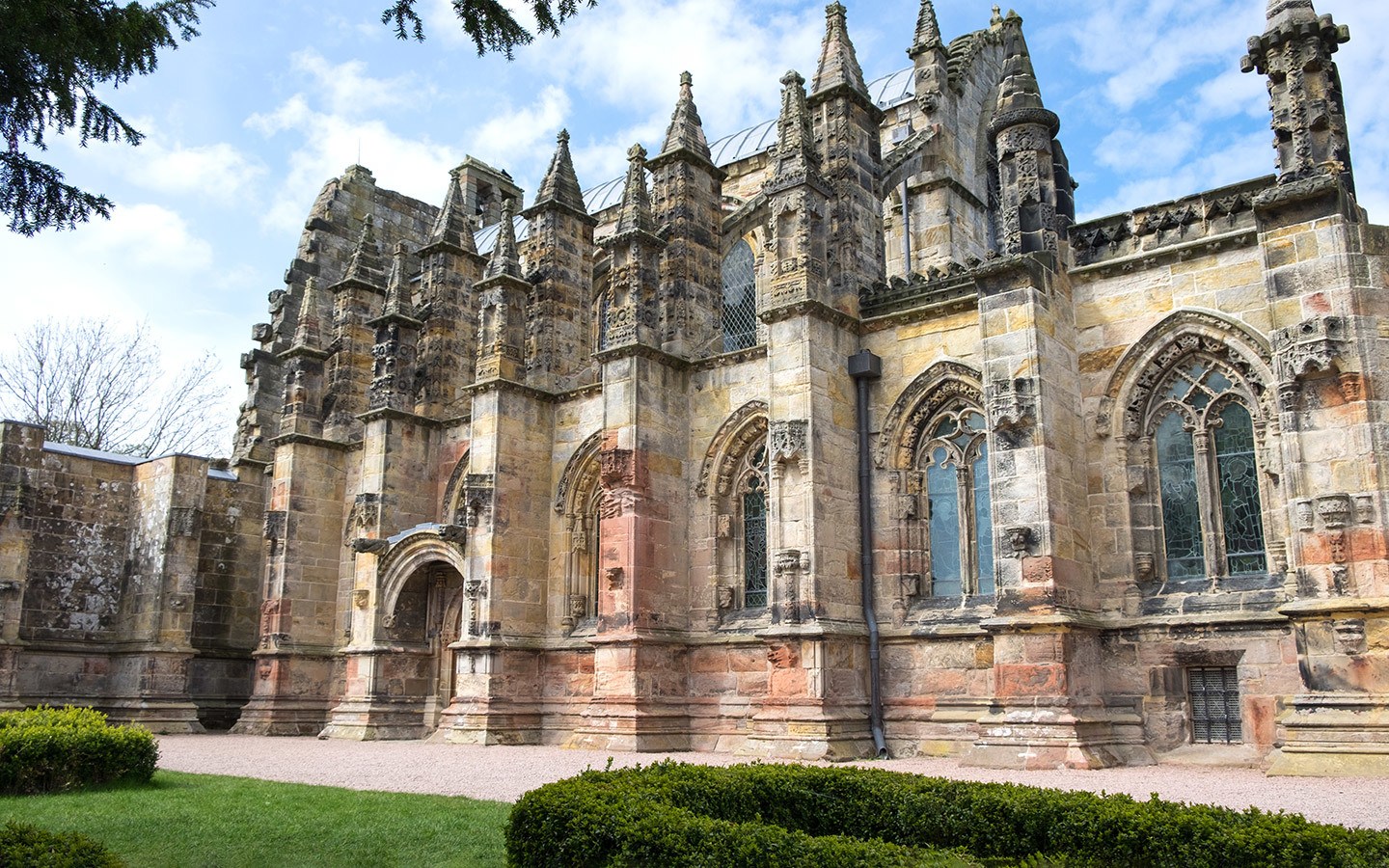 The exterior of Rosslyn Chapel features honey stone, arched windows and delicate pillars. But inside is even more special. Almost every surface you can see is covered with intricate carvings – stars, flowers, doves, angels and over 100 Green Men (human faces with greenery growing out of them). But some of the most impressive carvings are on the Apprentice Pillar.

Legend has it the master stonemason went away and his apprentice finished the column perfectly. And when the stonemason came back he flew into a jealous rage and killed the apprentice with a mallet. So in punishment his face was carved into the pillar opposite to stare at his apprentice’s pillar for eternity. The pillar is said to represent the Tree of Life, with symbols from Celtic, Pagan, Norse and Christian traditions all combined together. 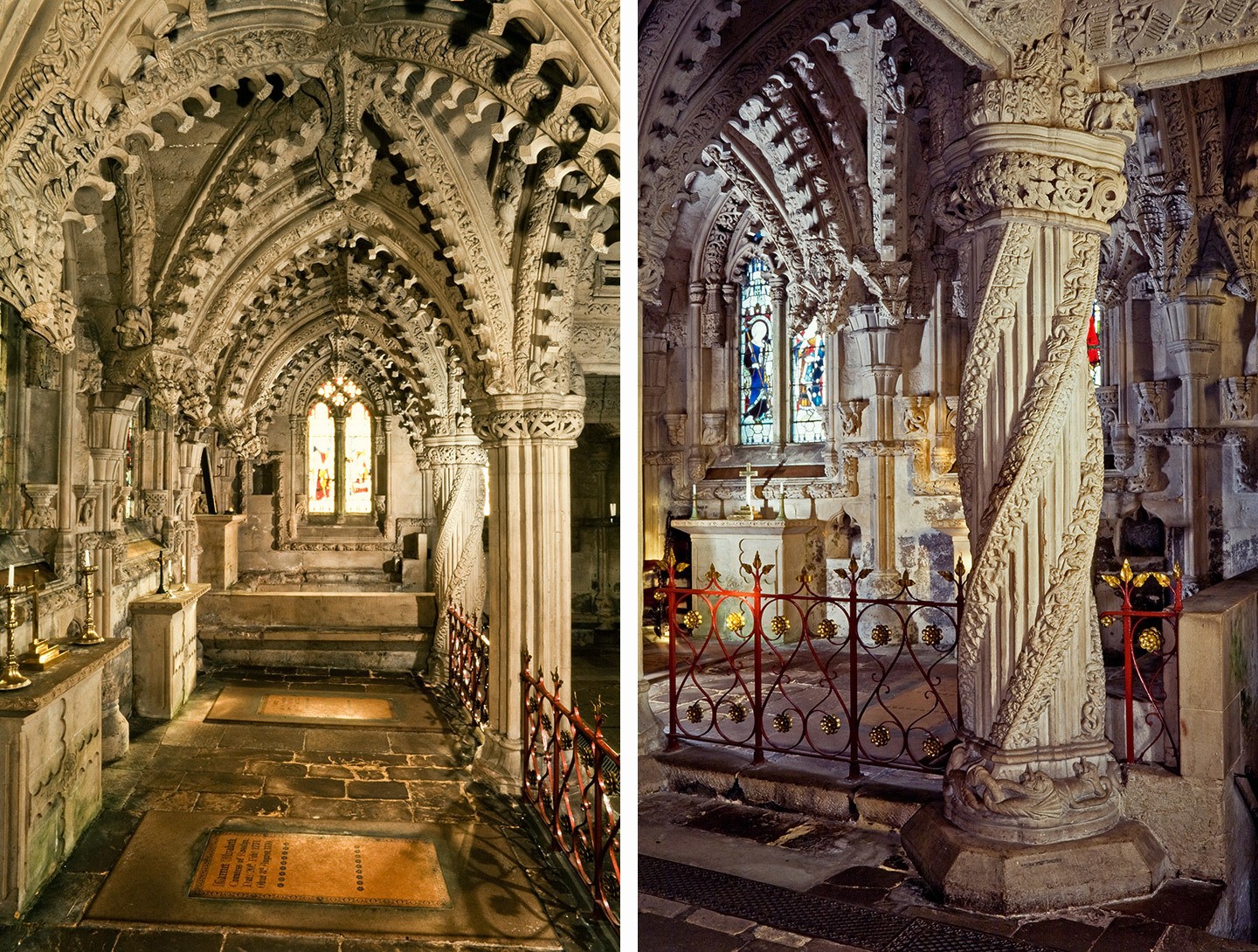 But that’s not the only legend attached to the chapel either, there are all sorts of stories about its links with Freemasonry and the Knights Templar. Is it built on a mysterious ‘Rose Line’? Or could it be hiding place for the Holy Grail? A lot of the original documentation when the chapel was built has been destroyed or gone missing, meaning the legends have flourished.

Author Dan Brown was so taken with the chapel and its myths that he made them part of his bestselling book The Da Vinci Code, which started off Rosslyn Chapel’s second renaissance. Visitor numbers spiked from 34,000 to over 176,000 after the film version of the book came out in 2006, and Tom Hanks and Audrey Tatou came to Rosslyn to film in the chapel’s real crypt. 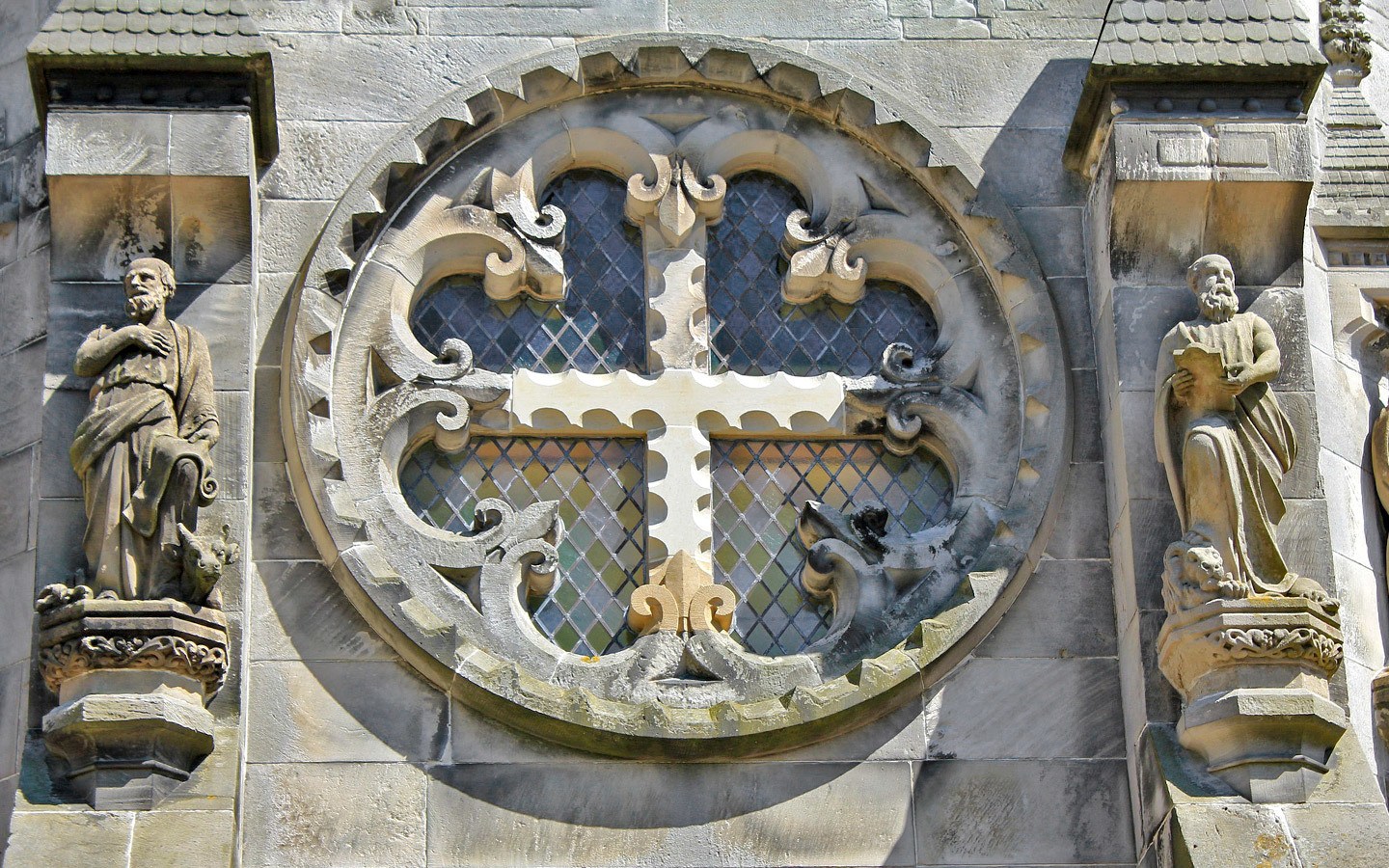 You can visit the underground chamber that was used in filming. But there’s also a mysterious second chamber in the chapel which has been kept sealed. Could it be the site of the Holy Grail? Well you might think it’d be easy to check, but there are concerns that unearthing the chamber could damage the structure of the chapel, and the current Earl of Rosslyn doesn’t want to disturb the bodies of his ancestors. So the mystery stays that way for now. 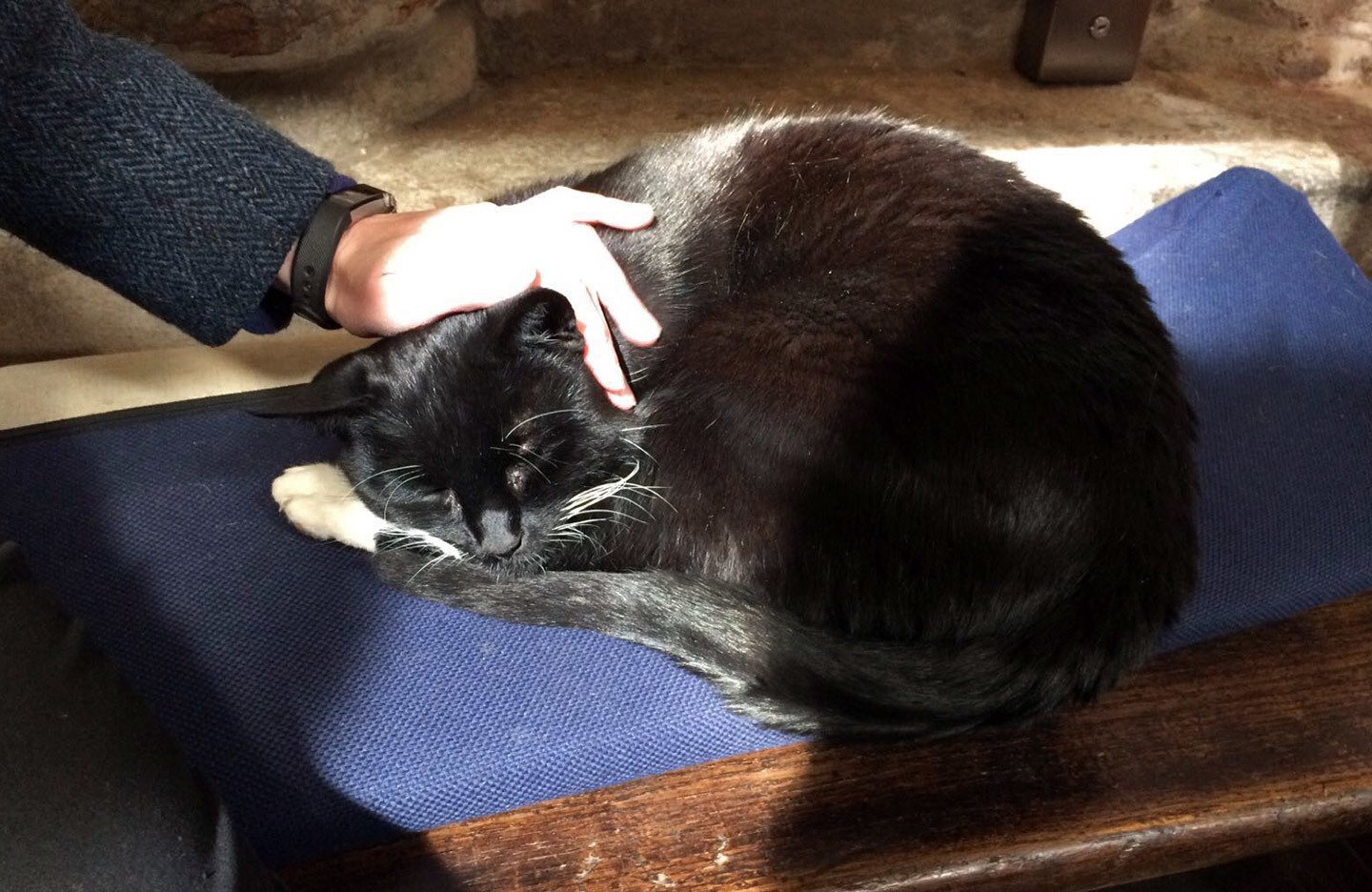 But forget about those Hollywood interlopers, they can’t compete with the chapel’s real star, its resident black and white cat. William – named in honour of the chapel’s founder – moved in as a kitten and hasn’t left since. Legend has it that he comes from a long line of cats who would come to guard the chapel, even though he’s got a home and owners in Rosslyn village.

William has become a bit of a local feline celebrity and you can buy a cuddly toy and book about his adventures in the chapel’s gift shop. We found him curled up in his favourite spot, snoozing in a sunny patch on the pews and oblivious to the tour going on next to him (he’s heard it all before). He’ll happily accept a few minutes’ fuss from a line of admirers. 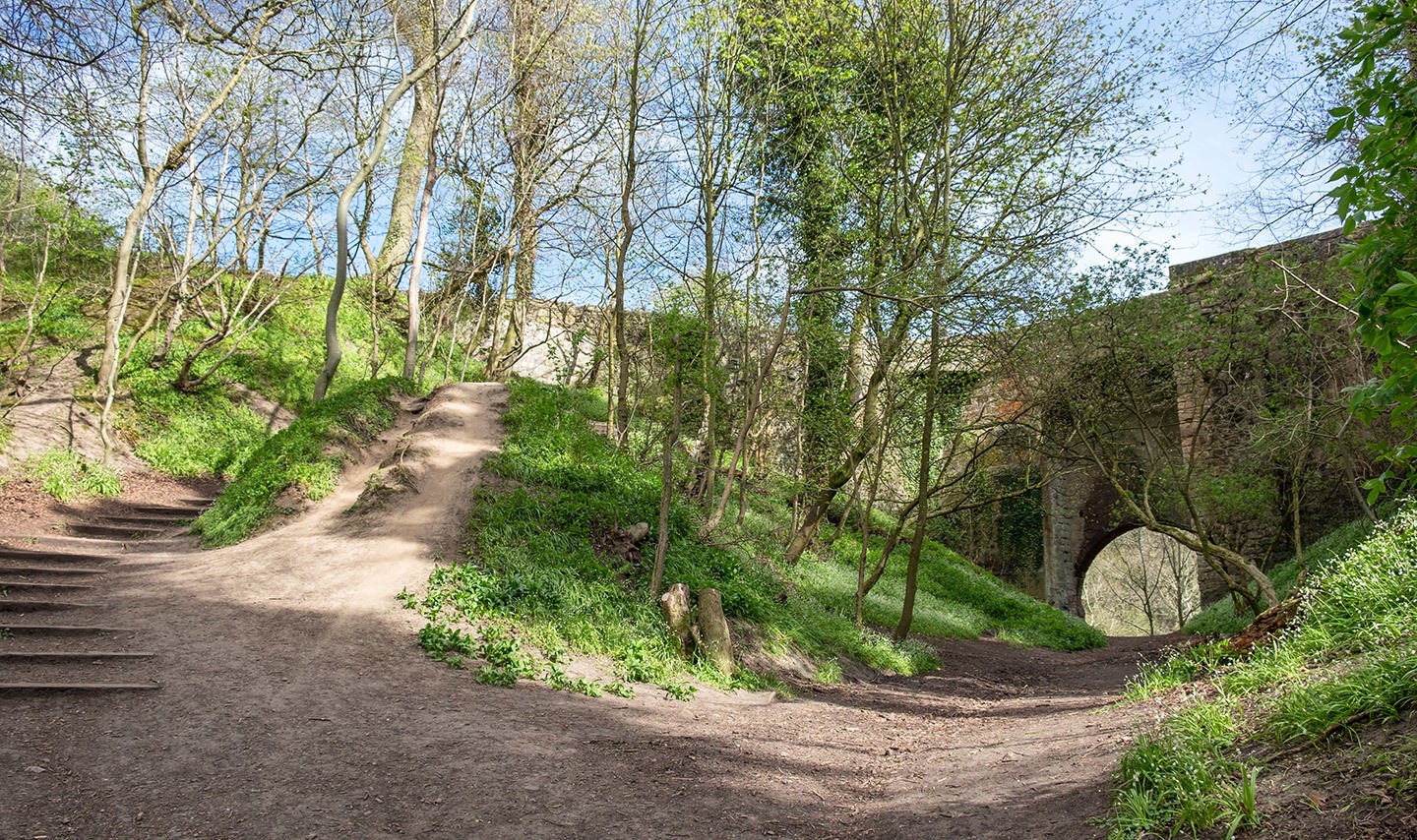 What else to see in Roslin

The chapel lies on the edge of Roslin Glen, so after our tour and cat-stroking we headed out for a wander in the woods. Tucked away among the trees is ruined Roslin Castle, built by one of William St Clair’s ancestors. It’s on a hillside across a tall bridge where the original drawbridge stood. There’s not much of it left, but of course it has its own legend, of a sleeping lady who’ll wake up one day, reveal a buried treasure and make the castle rise from the ruins.

Until then you can stay in a hidden holiday apartment next to the ruins, which is run by Rosslyn Chapel and the Landmark Trust. They also rent out nearby Collegehill House, built in 1660 as the Old Rosslyn Inn, hosting travellers including Robert Burns and JMW Turner. And the (confusingly named) Original Rosslyn Inn lies just down the road from the chapel and has accommodation as well as serving food in their gastropub and more formal Grail Restaurant. 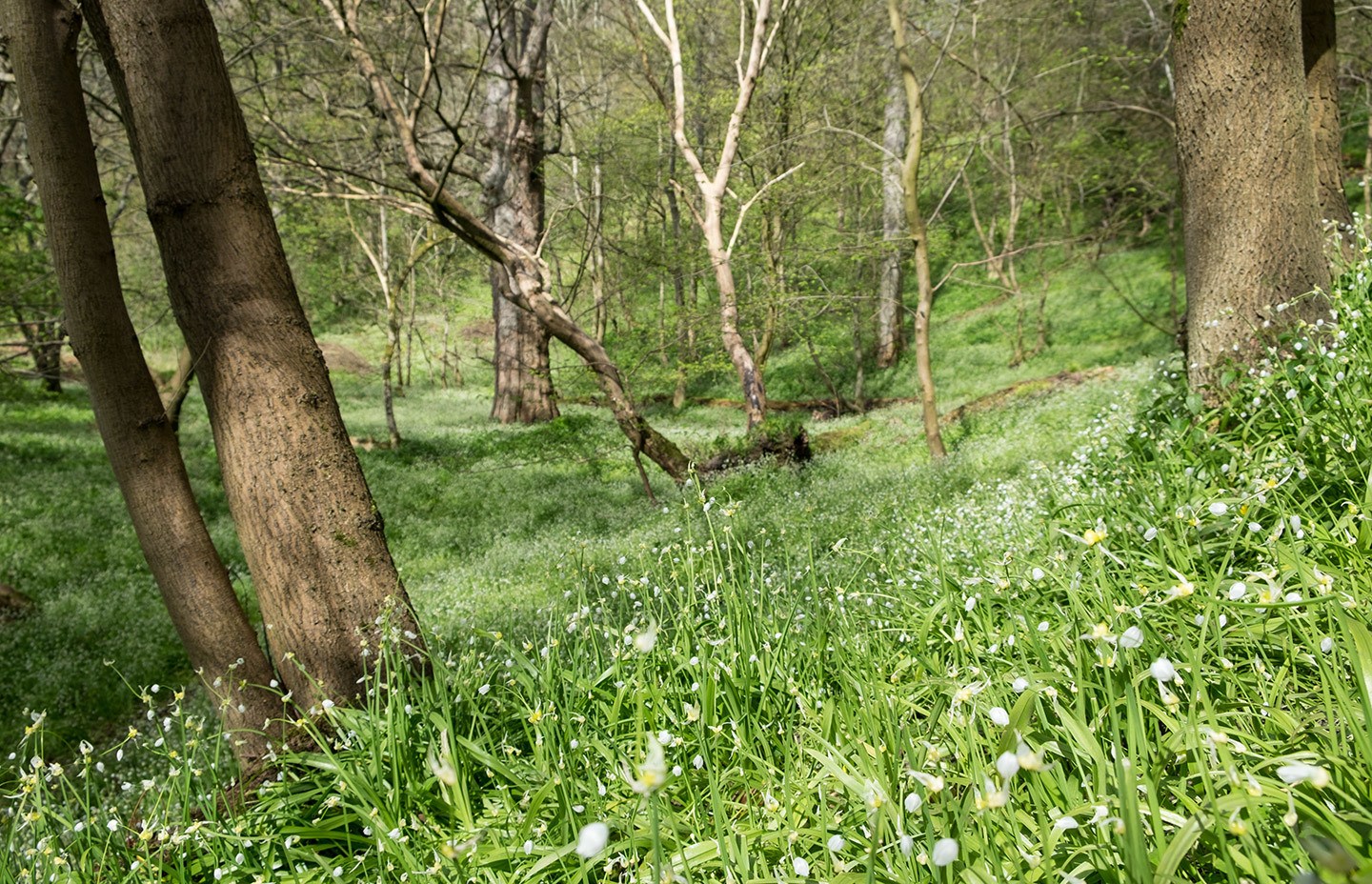 How to get to Rosslyn Chapel

Rosslyn Chapel is located around seven miles south of Edinburgh. If you don’t have a car, the 37 bus runs from Edinburgh city centre to Roslin village, taking around 50 minutes. Or you can take a day tour to Rosslyn Chapel which also includes Melrose Abbey and the Tweed Valley.

Rosslyn Chapel chapel is open from 9.30am–5pm (or until 6pm during June, July and August) on Mondays to Saturdays and from 12pm–4.45pm on Sundays. Entry costs £9 per person (£7 for concessions and free for children under 18 with a family group). Entry includes an information talk, held every hour from 10am–4pm (1pm–3pm only on Sundays). 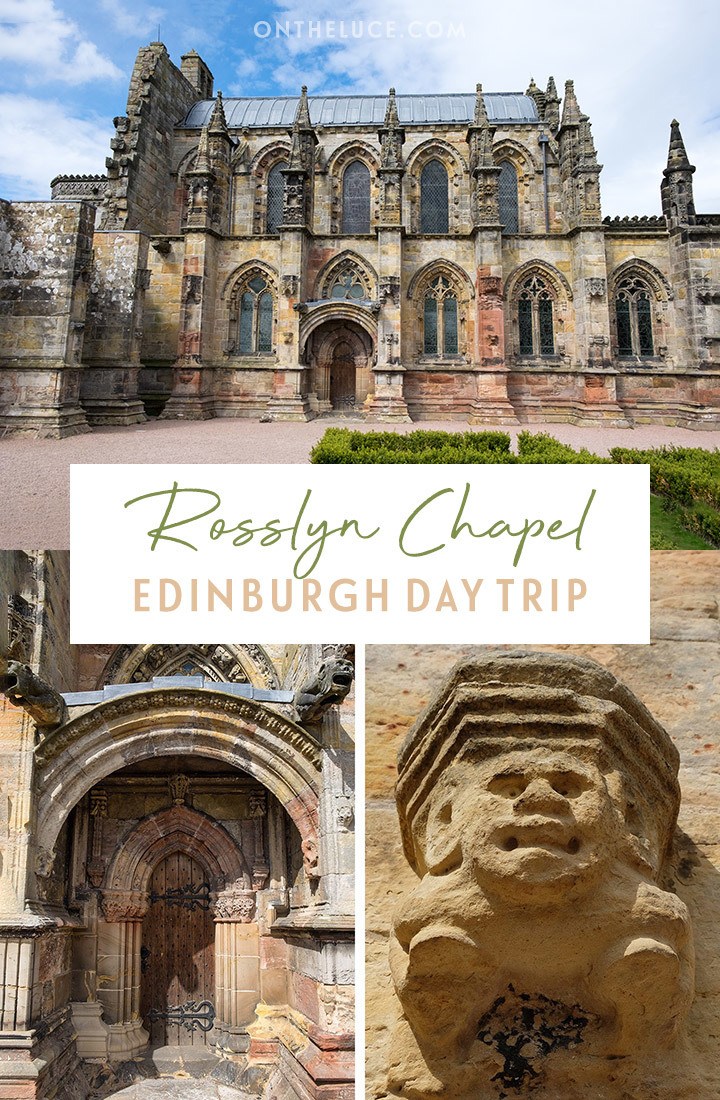 Love visiting Rosslyn Chapel! Some distant cousins actually got married there before the movie made it famous! We snuck through the woods to see the house back there too! Such a good view from there over the bridge.

What a lovely spot to get married – sounds perfect!

Have been dying to get to Scotland ever since watching Outlander. I think it will be so much like the series and dreamy like your post!

I've not seen Outlander yet but I must!

Mythology and felines - the perfect combination for me (and quite a few others, it seems). Lucy, your recent articles on Edinburgh and the surrounding area are really making me ache to go visit. It's all so utterly gorgeous and fascinating.

It's rapidly becoming my new favourite city! Such a diverse and beautiful place.

Loving the cat story, and I particularly like the setting with those stunning country grounds

I'm a sucker for all old buildings, and I love cats so this is right up my street :-)

Anything cat related I'm right in there too!