Its wildlife, wine and beautiful landscapes make it a real wish-list destination. But how much does it cost to visit South Africa? This budget breaks down the costs of 10 nights in the Cape and Kruger.

South Africa had been on my wishlist for longer than anywhere else in the world. It’s got a bit of everything – wildlife, beaches, mountains, wine regions. The only downside is the long journey from the UK. But if you can find a good flight deal, the value of the rand (with 100 rand getting you £4.80/$5.50/€5.60) makes it an affordable place to visit.

But how much does it really cost to visit South Africa? Here’s my budget breakdown for a 10-night trip to Cape Town, the Kruger and Johannesburg, breaking down the costs for accommodation, transport, activities and food to help you plan your own trip.

Note: these costs are based on my mid-range travel style – keeping costs down where I can to splash out on special experiences. This post was first published in 2018 but prices have been updated where possible to costs as of October 2022.

What does accommodation in South Africa cost?

Accommodation in South Africa is generally fairly reasonable, though hotels in Cape Town can be quite expensive, coming in at an average of 3000 ZAR (£146/$166/€170) a night for a double room in a four- or three-star hotel in a central location.

Since we knew the safari would be a big blow-out, we tried to keep costs down in Cape Town to balance things out. Apartment rental is generally much better value than a hotel, so we chose a one-bedroom apartment in Oranjezicht, at the foot of Table Mountain.

It was secure and quiet, with a full kitchen so we could save money by cooking some meals, access to a swimming pool and terrace, and the friendly owners gave us lots of Cape Town tips. It cost 5730 ZAR (£280/$317/€324) for two people for five nights in November (including the AirBnB fees), which works out at £56/$63/€65 per night.

The trip’s biggest expense was always going to be the safari. There are lots of different options for a South African safari – from £1000-a-night luxury lodges to budget campsites. For my first safari I wanted to try the classic game lodge experience, so we chose Naledi Game Lodge in the private Balule Game Reserve on the edge of Kruger National Park.

There’s a huge choice of safari lodges in the Kruger area so it’s always going to be a bit of a punt choosing one over the others. But Naledi had (justifiably) amazing reviews and a not-too-eye-watering price tag. We stayed in the Marula Suite in the Bush Camp, which has two bedrooms with a private deck, en-suite bathroom and air conditioning.

We also spent one night sleeping on the Premier Classe overnight train between Cape Town and Johannesburg, which is included in transport costs below.

And we spent our final night in Johannesburg at the African Pride Melrose Arch* hotel, which cost 2460 ZAR (£120/$136/€139. As we didn’t have much time in Johannesburg and we flying out the next evening, we picked somewhere which was easy to get to, had places to eat nearby and a pool to chill out by before we headed home.

How much is transport in South Africa?

Central Cape Town is easy to get around on foot so we did a lot of walking, although we did take a taxi from the airport to our apartment in Oranjezicht which cost 300 ZAR (£15/$17/€17). We also took a couple of trips using Ubers. Uber is really cheap in Cape Town, so three short rides around the city only cost 145 ZAR (£7/$8/€8) in total.

We also used the sightseeing bus (included under activities) to reach some of the places a bit further out, like the beach suburbs and Kirstenbosch Botanical Gardens.

We hired a car for one day in Cape Town to do a road trip down the Cape Peninsula to Muizenberg and Boulders Beach. This was only booked the night before by searching for the closest car rental office which had the lowest prices. That ended up being Europcar, where a day’s car hire and petrol cost us 465 ZAR (£23/$26/€26).

And finally, we took the Gautrain to Johannesburg airport from the train station to collect our hire car, which costs 191 ZAR (£9/$11/€11) per person one way.

What’s the price of activities in South Africa?

Most of the things we did in Cape Town were free – walking along the coast, listening to music at the V&A Waterfront, lazing in parks, visiting free museums.

We also took a couple of day trips from Cape Town. The first was a private wine tour to Stellenbosch and Franschhoek for 1650 ZAR (£80/$91/€93). It included visits to four wineries, and was well worth the cost for the amount of tasting samples.

All activities at the game lodge were included in the price, with twice-daily game drives plus an afternoon walk or trip to a hide. Tips are extra though – articles I read say you should tip 200–250 ZAR per day to your guide, 100–150 ZAR to your tracker and lodge staff.

What does food and drink cost in South Africa?

Food and drink – especially local wine – is really good value in South Africa, and we had some great, inexpensive meals. In Cape Town we tried to keep to a budget so we mixed up making our own breakfasts and dinners with eating out at lunchtime.

A safari’s such a bucket list trip it’s worth splashing out on and South Africa’s affordability means you can save on other things so the overall budget doesn’t get too out of control. I loved it and would definitely go back and explore more of the country.

Lower budget? The easiest way to save money would be to cut safari costs by staying in a SANParks lodge or camp. They’re state-owned so are more no-frills, but the locations are fantastic and you can either drive yourself around the park or join their ranger tours. You could also cook more and cut out pricier activities like the wine tour or Robben Island.

Higher budget? If you want to splash out, Cape Town has gorgeous beachside hotels*, as well as high-end restaurants and activities like helicopter trips over the city. You could also do a longer safari, stay in a luxury lodge, or do a fly-safari to multiple locations.

Looking for somewhere to stay in South Africa?* 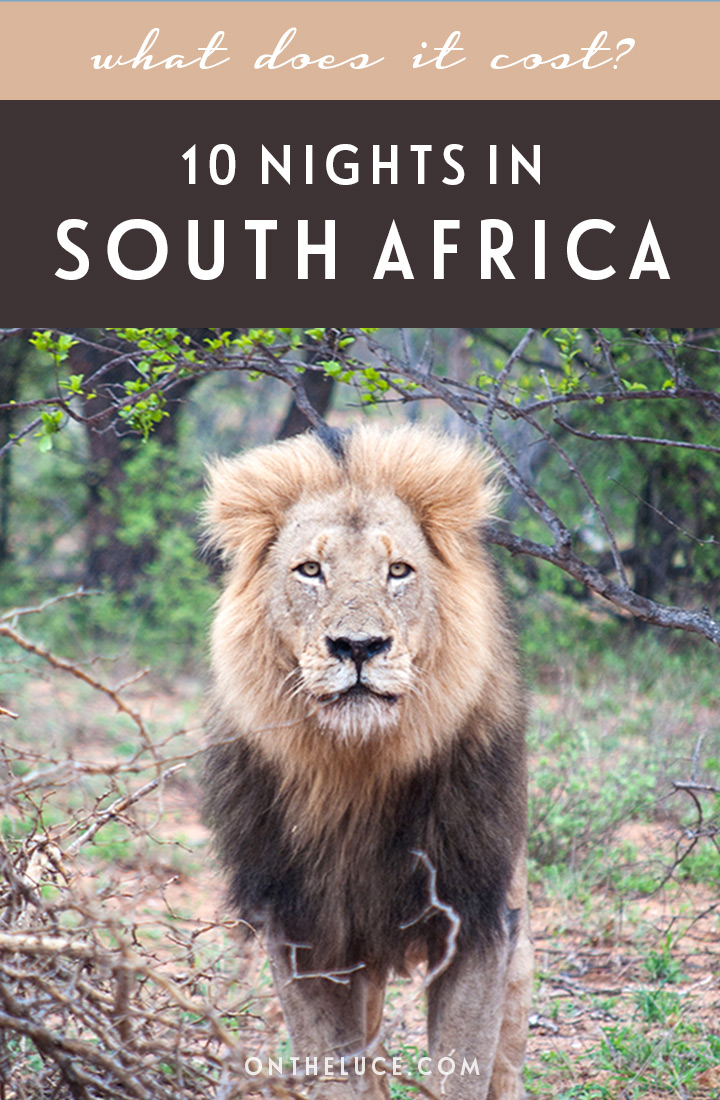 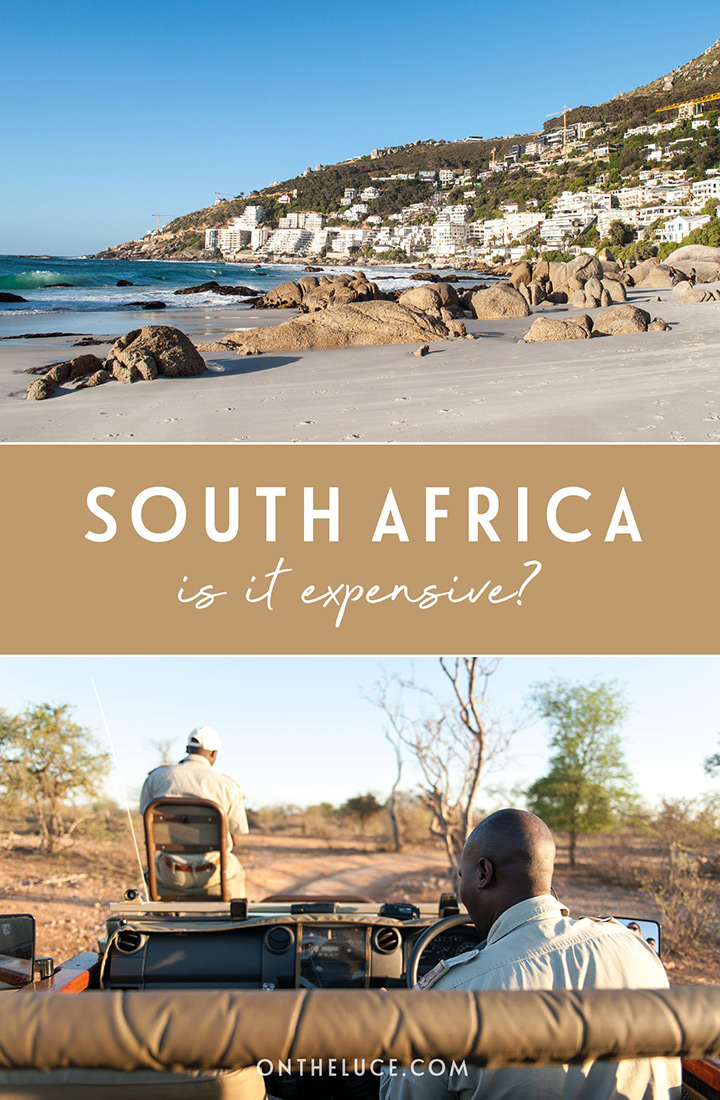 Visiting Cape Town on a budget

Cape Town to Johannesburg by train: On board the budget-luxury Premier Classe train

In the USA, I feel totally comfortably driving wherever via GPS; however, I am leery to do so in a foreign country and have heard many horror stories. How safe did you feel commuting to all of these places in a rental car via GPS, driving on the opposite side of the vehicle and road, being stopped often at borders, etc.? We would be traveling two women (myself and mother) with two teens.

Hi Ashleigh, we were cautious driving to Kruger as had heard about accidents, but the road quality was patchy so were naturally going quite slow. No problems though at toll booths etc and the GPS worked well. Though worth noting that in South Africa they drive on the left the same as the UK so that wasn't an issue. If you don't want to drive and are staying at a game lodge they'll often provide pick ups from the nearest airport or Johannesburg, though it's more expensive than driving.

Hey Lucy, South Africa seems to be much more affordable than I thought. Thanks for the practical tips! If everything goes as planned, we'll be traveling to South Africa next year in May.

Fingers crossed for you, I loved my trip to South Africa and hope to get back there someday!

We are planning our 30th wedding anniversary next he and my 70th birthday. This sounds very affordable thank j's for providing such detail

You're welcome – and hope you have a wonderful trip!

Hi lucy, I am planning trip to arrive SA to jehannesburg and return from cape town. What would you recomand first safari... Can you suggest me a budget safari plan and post safari i am planning to follow the cape town visit.

ANIKET one of my favorte spots in the world is Ngwenya Lodge right on the south of the Kruger National Park. If you have any timeshare it may be quite affordable. Pretty accessible from major roads / airports. Be sure to get a river view lodge! The beauty of the lodge is that it opens up on a 180° vista of the Crocodile River looking north. There is no boundary between the lodge and the wildlife. You can spend the morning / day just watching from your porch. We've seen a leopard take an Impala from there, Lion, Elephant, Buffalo... If you want to drive into the park the Crocodile Bridge gate is about 20 minutes away. Be sure to get everyone in your crew a decent pair of binoculars.

Hi, the cheapest way to do a safari is to stay in one of the SANParks lodges or camps at the Kruger – the accommodation is simple but reasonable and the locations are great. If you have a hire car you can drive yourself around the park or there are ranger-guided tours you can take part in too.

We always heard October was the time to go. We went mid-end October. Out of the 15 days there; from Capetown, to the Winery Region; we had one night/early AM of heavy rain and Thunderstorms in Entabeni. Our entire hotel was surrounded by Wildebeests. And what a treat it was to see them act in such uniform of the storm. Facing East...then West...then South....ending North.....until the storm ended. Magnificent to watch!!!! For what it's worth since I originally questioned how much Rand to bring. We brought 3000 Rand; and we could've used a little more if we wanted to. So much to buy.......I Loved South Africa so much. We were there for a week; then up to Victoria Falls then to Zimbabwe. Beautiful! Beautiful! Beautiful~!

Sounds like you had a wonderful trip! It's such a great country, I hope to get back to see some more someday.