Steam Dreams: A steam train day trip on the Settle to Carlisle Railway 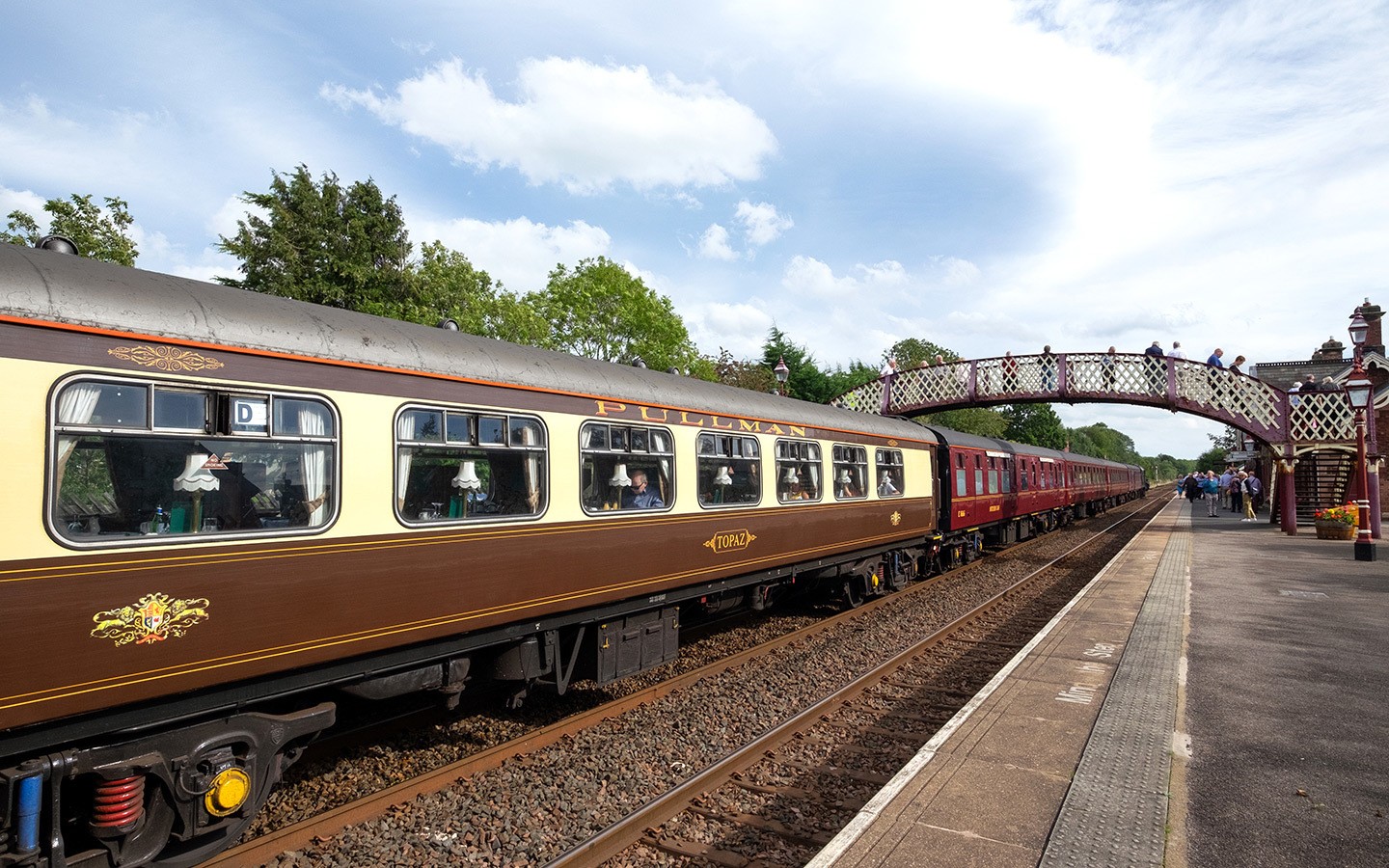 The hiss of escaping steam, the smell of the engine wafting through an open window, the sound of the whistle and the clinking of Champagne glasses… it could be a scene from Brief Encounter or Murder on the Orient Express, but instead it’s a Saturday morning in north-west England. The train is my favourite way to travel, but modern-day rail trips aren’t necessarily a luxurious experience. But add a touch of steam and you’ll find yourself transported back a few decades as you travel across the country on a steam train day trip with a dose of vintage glamour.

This trip was hosted by Steam Dreams, but all views are my own. 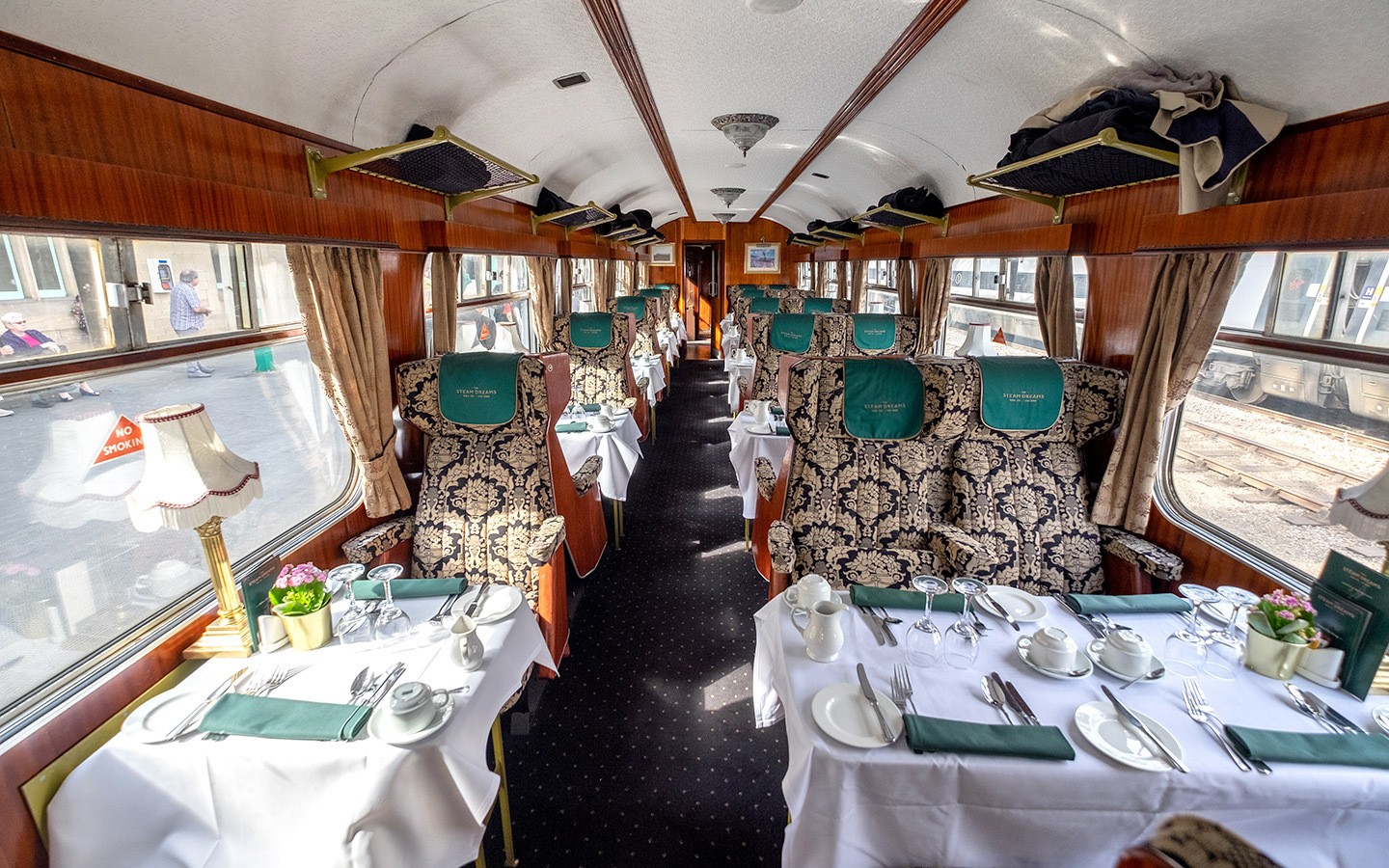 Steam Dreams specialise in trips by steam train and run day trips to 35 locations around the UK – though these trips are as much about the journey as the destination. You normally get a few hours to explore your destination, but the highlight is travelling by steam train to get there, soaking up the sights, sounds and smells, with plenty of eating and drinking along the way.

I stopped in Carlisle twice a week over the last year on my way to university in Dumfries but never made it out of the station, so an invite to try a steam train day trip was the perfect excuse to experience one of Britain’s most spectacular rail journeys – the Settle to Carlisle Railway. The trip started in London in the early morning, but passengers can also join at certain stations along the route. So along with a small group, my dad and I boarded our Pullman carriage at Crewe. 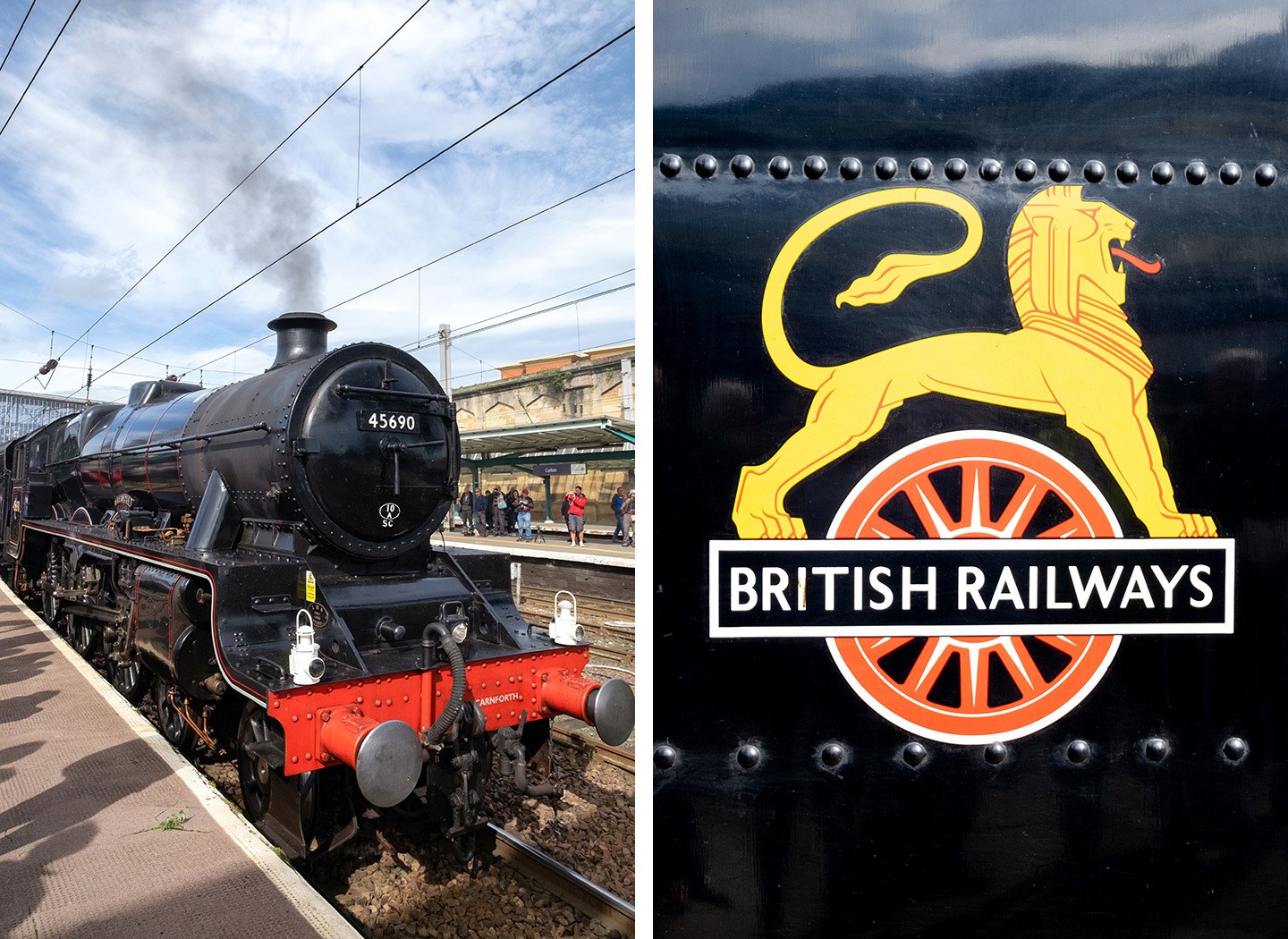 The carriages date back to the 1950s and 60s and you stay in the same seats all day, but the train hauling you changes along the way. So once we reached Carnforth we made a brief stop to exchange our diesel loco for a steam engine. Being on board a steam train is a bit like being famous for the day – camera-toting crowds wherever you go, long lenses lined up in remote fields to catch a glimpse of you, fans with encyclopaedic knowledge of all your vital statistics. Except it was our loco Leander who everyone was there to see rather than us.

Leander was built in 1936 in Crewe and is a London Midland and Scottish Railway Jubilee Class locomotive (for those in the know). After working on mainline services for 30 years, she was sold to a scrapyard before being rescued, restored and brought back into service. And after more restoration and a paint job in 2014 she was our ride for the day, taking us from Carnforth to Carlisle up the West Coast Main Line and back to Blackburn via the Settle to Carlisle Railway. 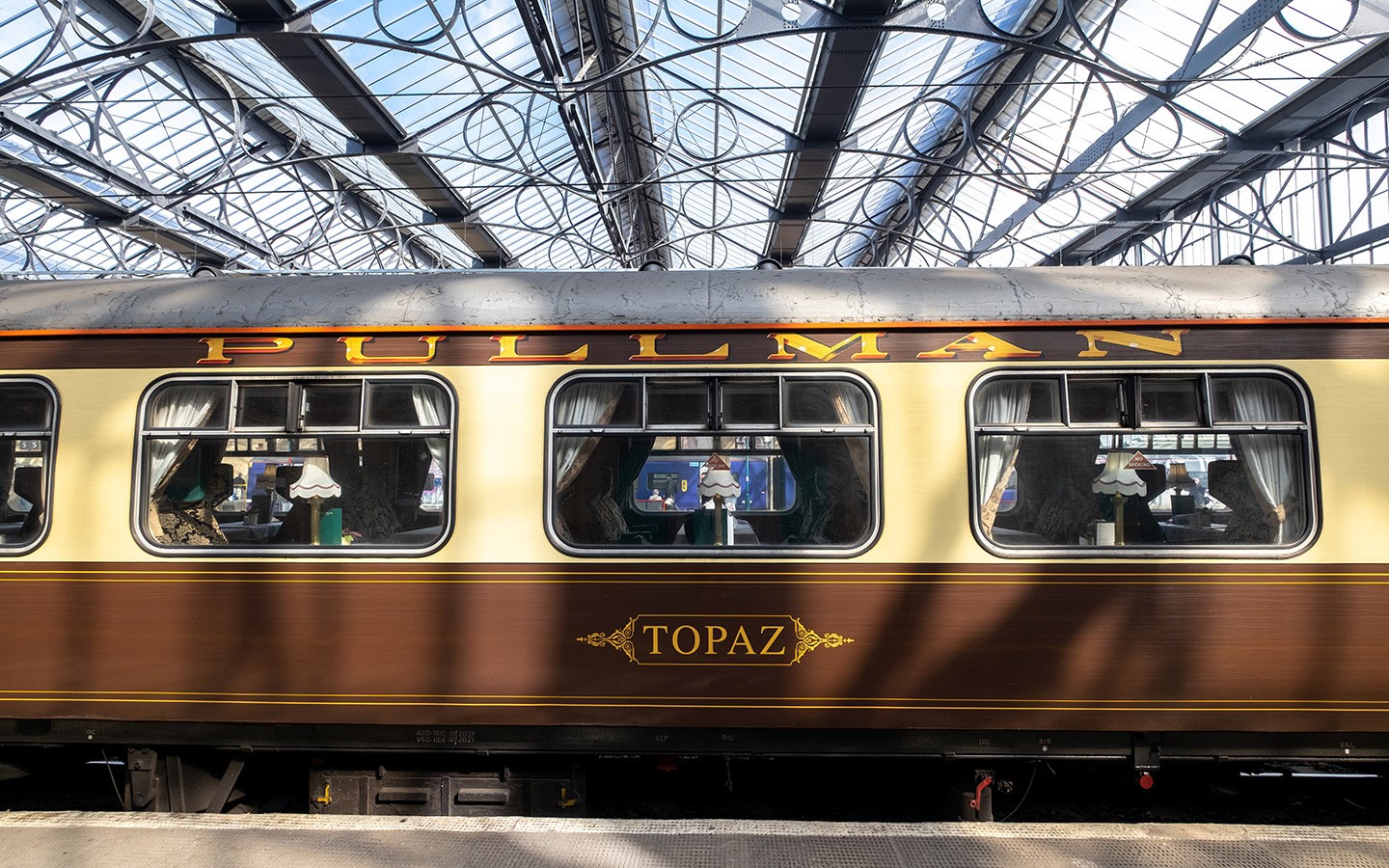 On board with Steam Dreams

Steam Dreams’ train trips have four different classes of travel: Premium Standard, First Class, Premier Dining and Pullman Style. It’s not immediately obvious from the name which is the ‘best’, but the first two are the non-dining options, where you can buy food on board or bring your own. And the second two are the more high-end options where you get meals included which are served to you at your table, with Pullman Dining being the most luxurious.

Our Pullman Dining carriage dated back to the 1950s and was a world away from the modern train experience. Think wood-paneled walls, armchair-like seats, table lamps and white china instead of wipe-clean surfaces and plastic cutlery. On one side of the carriage are tables for two and on the other are tables for four. You can pay a bit extra to reserve one of the twin seats or otherwise you can share a table for four and are allocated people to sit with. 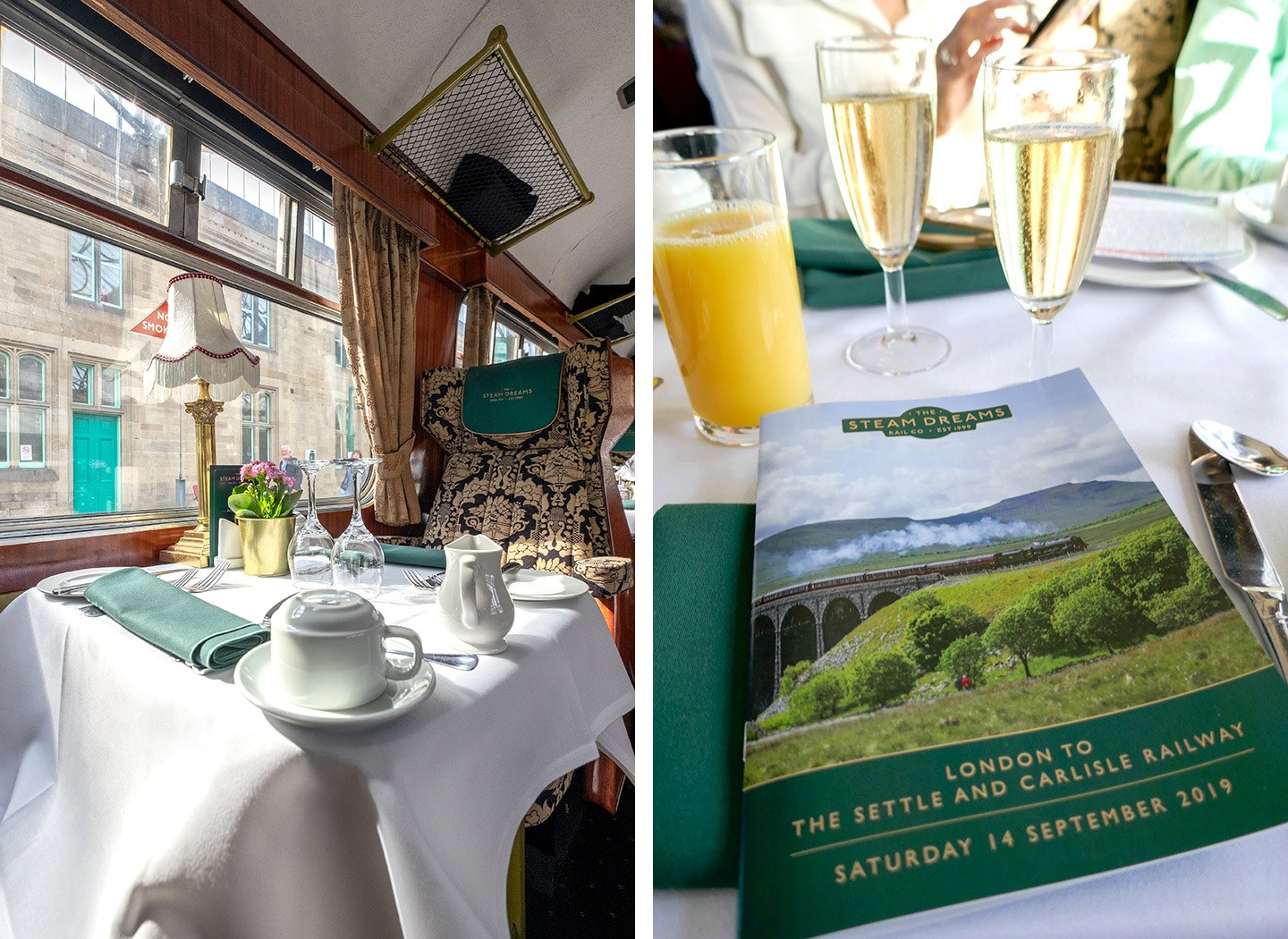 We were welcomed on board with a glass of bubbly and a guide to the route, telling you what you’ll see along the way and the timings for the trip. There’s also a Passenger Experience Director on board who walked through the train answering any questions as we made our way up through the Lake District en route to Carlisle. There’s an almost constant supply of food and drink, and non-stop scenic views, but it’s also a welcome chance to just sit and relax.

Just before 1pm we arrived into Carlisle for around a 90-minute stop. Everyone gets off the train at the destination while tables are relaid and the staff set up for the return journey. But for most people the lure of Leander was greater than the attractions of Carlisle, and there was a crowd of people gathered around to take photos or climb on board to check out the engine. Then we had just enough time to stretch our legs with a walk to Carlisle’s medieval castle. 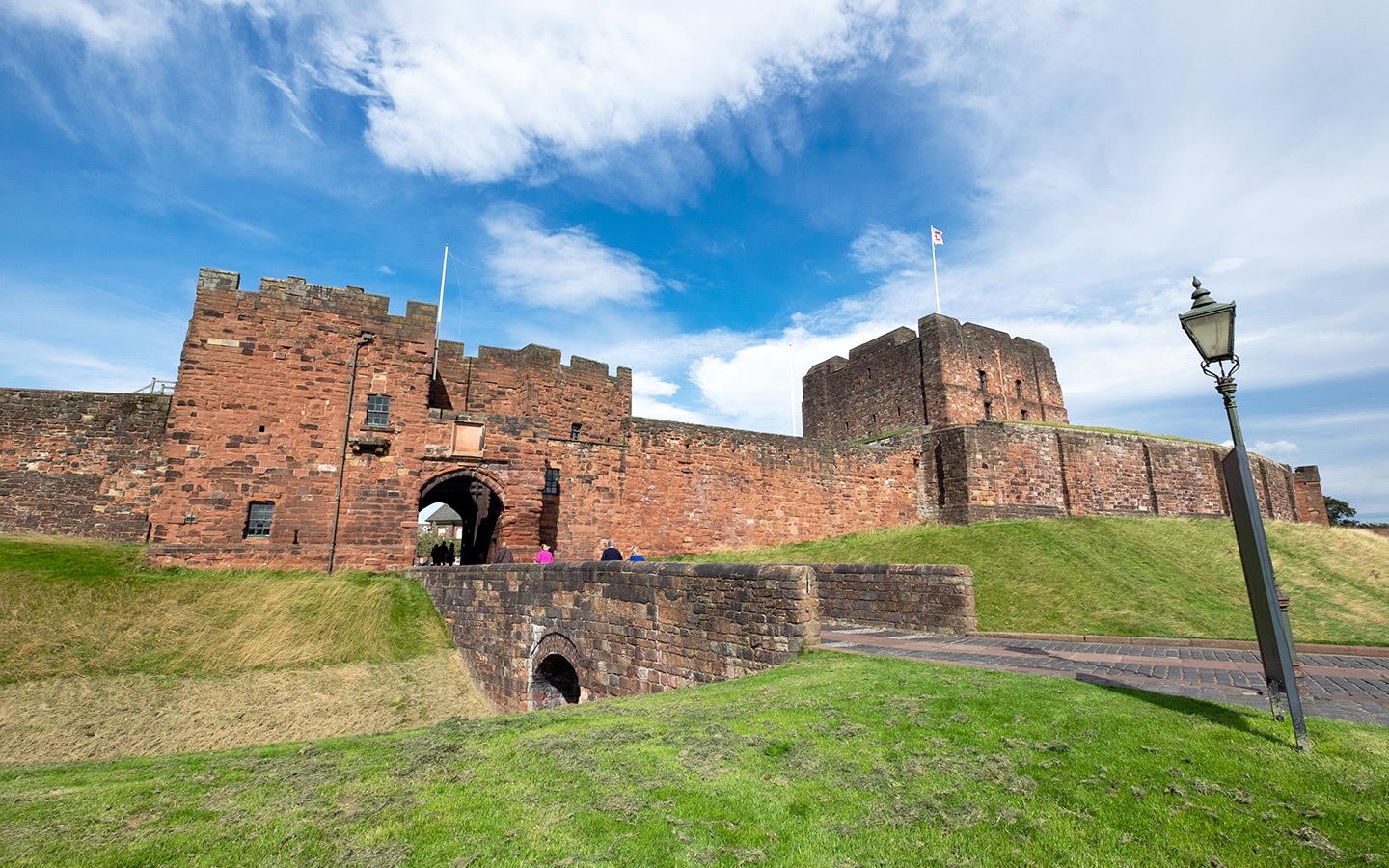 The Settle to Carlisle Railway

Our return journey took us off the West Coast Main Line and onto the historic Settle to Carlisle Railway. This 72-mile route was the last great mainline railway to to be built in the UK, opening in 1876 and running through the North Pennines, Eden Valley and Yorkshire Dales. Which means spectacular views for us rail passengers, but tough conditions for the 6000 men who worked for six years to built it, battling rough terrain, brutal weather and disease outbreaks.

Construction was a real challenge and the line needed 380 bridges, 14 tunnels and 22 viaducts to make the journey through Cumbria and Yorkshire on the ‘scenic route to Scotland’. The hilly countryside made things difficult, as gradients had to be kept within limits to make the line suitable for steam trains to travel on. And that’s despite the fact that Ais Gill on the route is the highest point reached by mainline trains in England, with its summit at 356 metres. 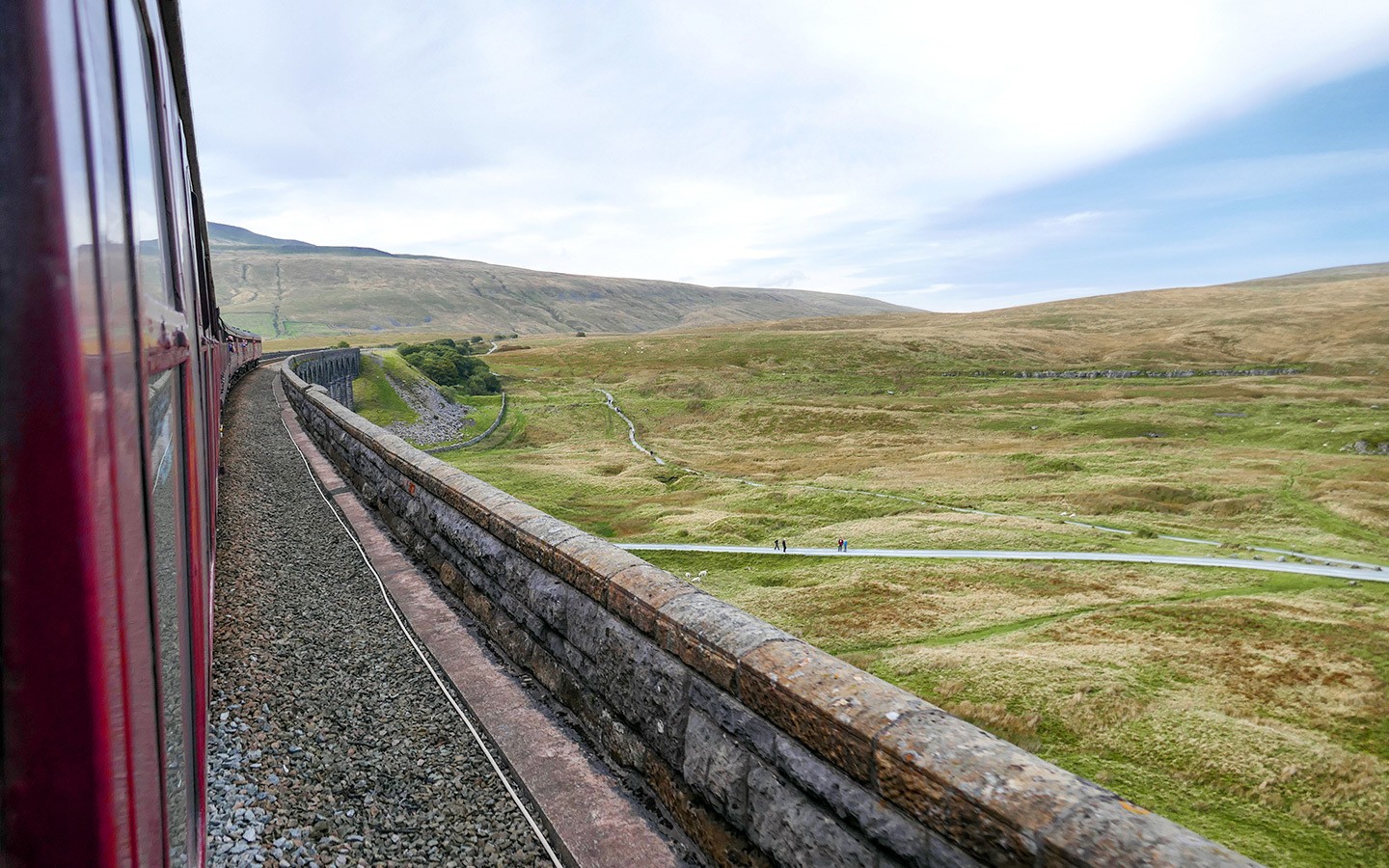 Further along we came to the line’s most famous landmark – 400-metre-long Ribblehead Viaduct. Its 24 arches took four years and 2000 men to build, in a seriously impressive piece of Victorian engineering. The only problem is that when you’re travelling over the viaduct you can’t see much of it, but it’s one of the most popular spots for people to come and watch the train go past (similar to the Glenfinnan Viaduct in Scotland which I visited earlier this year).

The remoteness of the route and the dramatic landscape are what makes the Settle to Carlisle Railway so special. It’s not an area where you see many signs of modern life, so being on a steam train does feel like you’ve gone back in time. But the railway’s remoteness hasn’t always worked in its favour. Passenger numbers started to fall from the 1950s and it ended up as more of a freight route. But by the 1980s that was in decline too and the line was scheduled for closure. 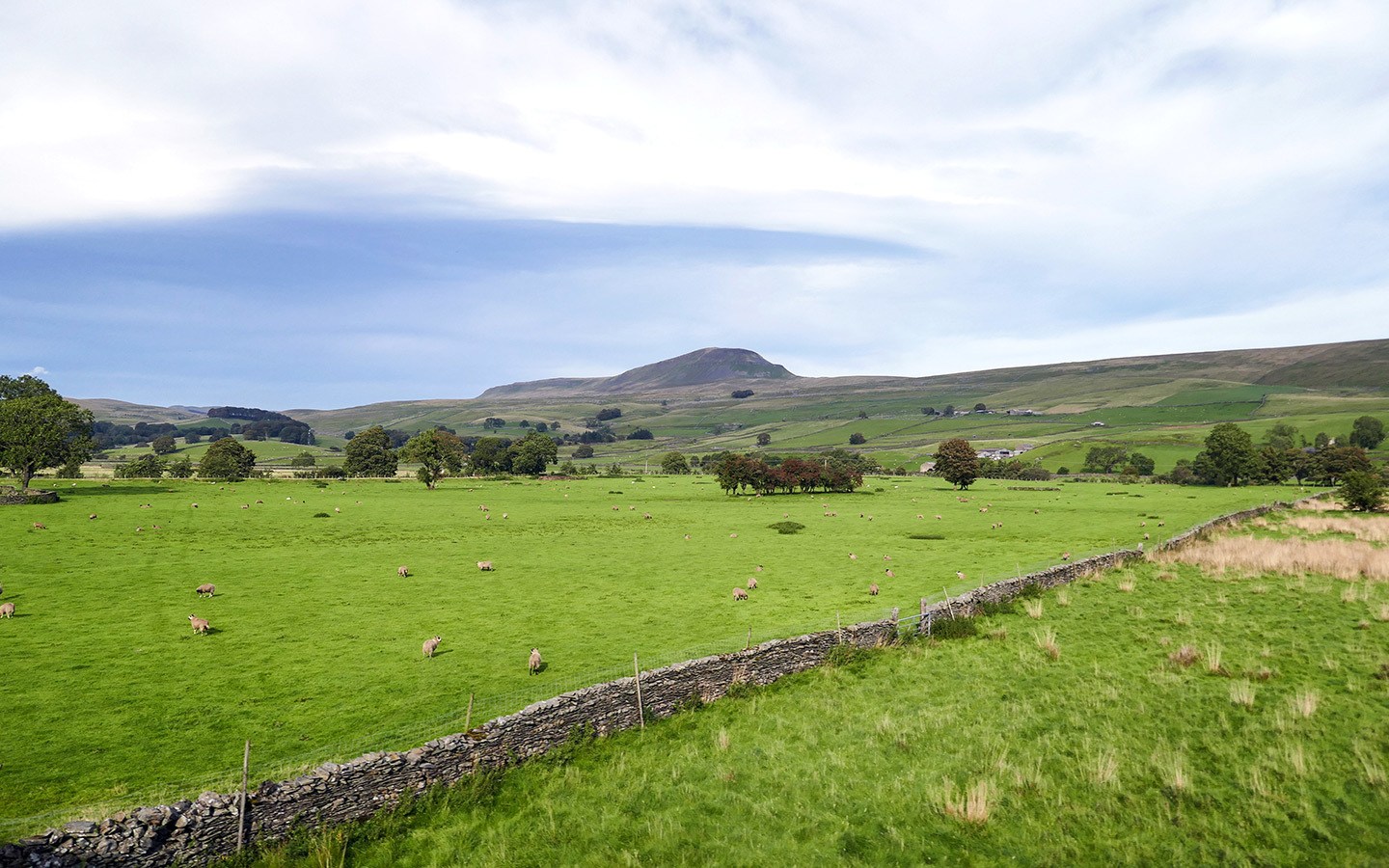 Views along the route

A lack of demand meant there wasn’t money for investment and the line’s bridges and viaducts were falling into disrepair – probably not helped by the fact that this area sees four times more rain than London. In 1984 only 90,000 passengers travelled on the line in the entire year, and it seemed like there was no way it could be preserved. But a group of local residents and rail enthusiasts took up the cause and formed the Friends of the Settle to Carlisle Railway.

A campaign to save the line gathered momentum and reintroduced people to the beauty of this rail route, and increasing passenger numbers helped force British Rail’s hand – plans to close the line were shelved and maintenance on the track restarted. And now eight of the 11 original stations have reopened, including Appleby where we made a stop for water (for the train) and ice cream (for the passengers) and over 1.2 million people travel on the line each year. 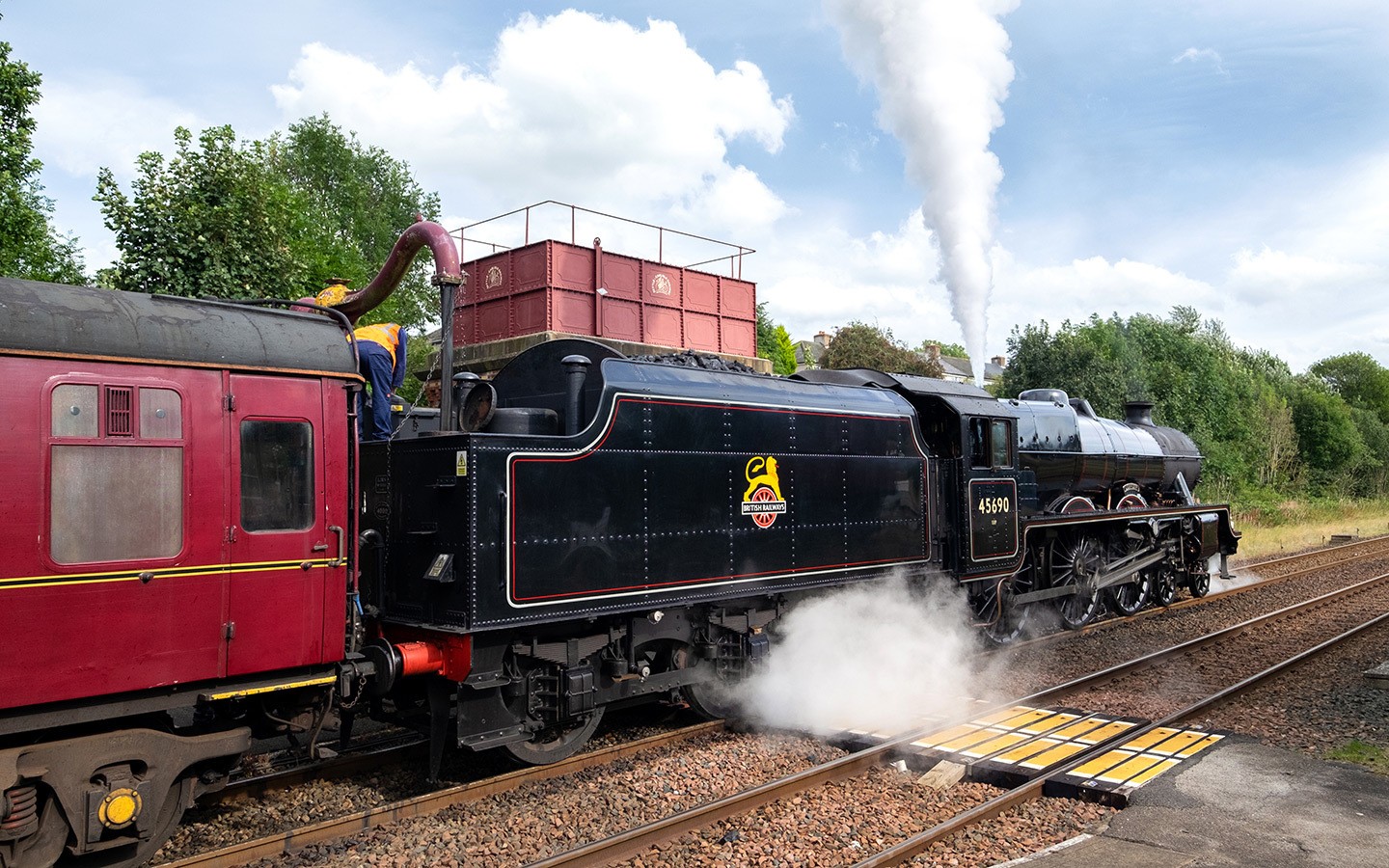 A water top up at Appleby station

Pullman trains were the luxury train services which ran from the 1870s to the 1970s, adding fine dining and fancy facilities for the well-heeled train passengers of the day. Pullman services mostly died out with the rise in road and air travel, but some of the original carriages have been preserved, and the glamorous legacy of Pullman Dining still lives on.

On the journey up to Carlisle we were served Champagne and orange juice, followed by Danish pastries, yogurt with fruit coulis and a full English breakfast. And on the way back we were served a four-course dinner. There’s one set menu but you can let them know if you’re a vegetarian or have any special dietary requirements in advance. And the food quality is definitely more restaurant standard than the microwaved fare you’d expect to find on a train today. 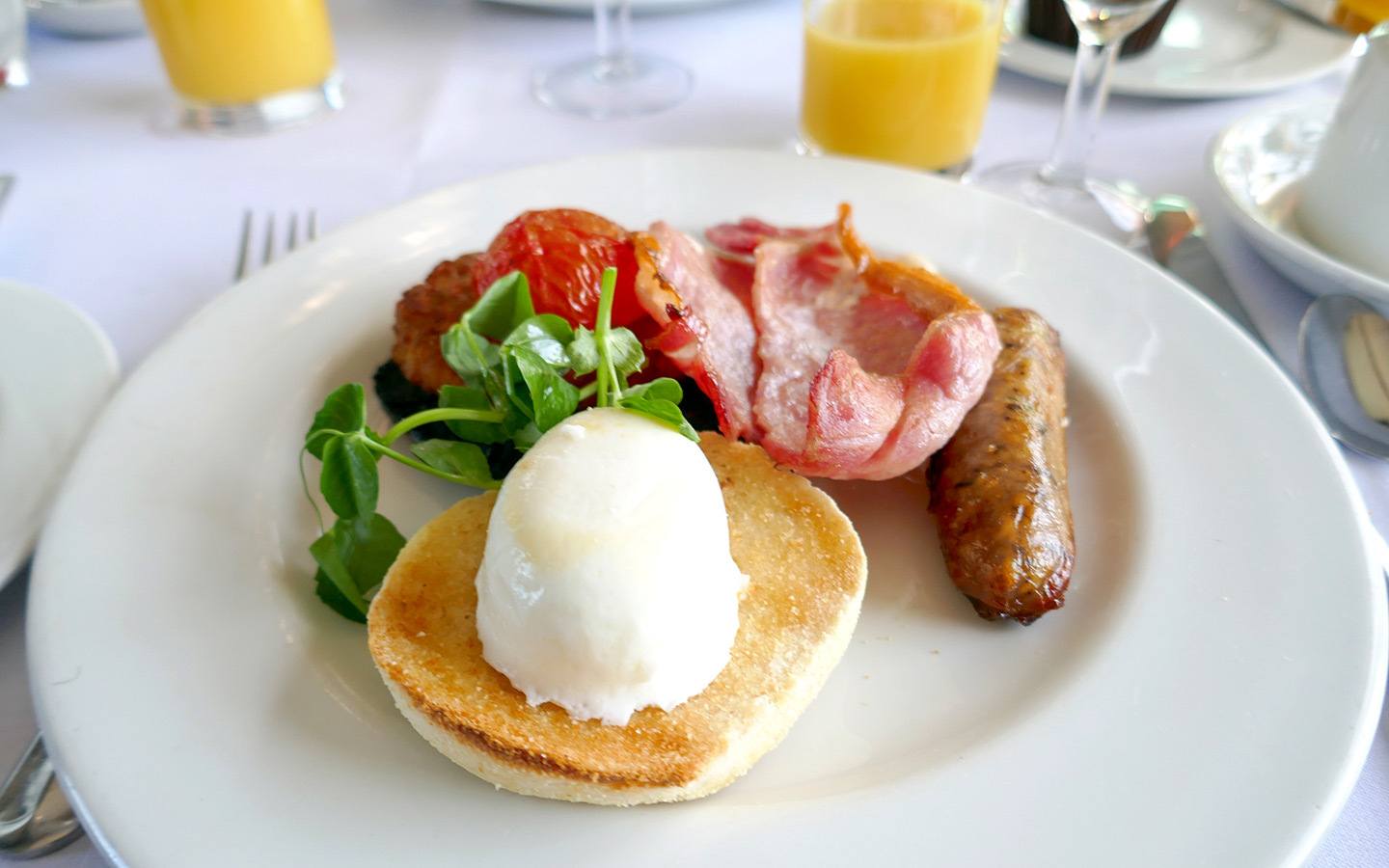 Our breakfast on board

The menu features British dishes using seasonal ingredients, all cooked up in the on-board kitchen car. And the waiting staff did a sterling job – with a particular mention to the girl in charge of spooning out baked beans on a particularly bendy section of track! The perks of Pullman dining include canapés and half a bottle of wine per person with your meal.

On our menu was a starter of Scottish smoked salmon with picked cucumber and capers, a main course of roast rosemary and garlic chicken breast with crushed new potatoes, vegetables and tarragon sauce, a dessert of lemon tart and a cheese course before tea or coffee and truffles. It’s served at a leisurely pace so you can enjoy the views – and this is a journey to savour, because all too soon we were back in Crewe, leaving the Age of Steam behind for the 21st century. 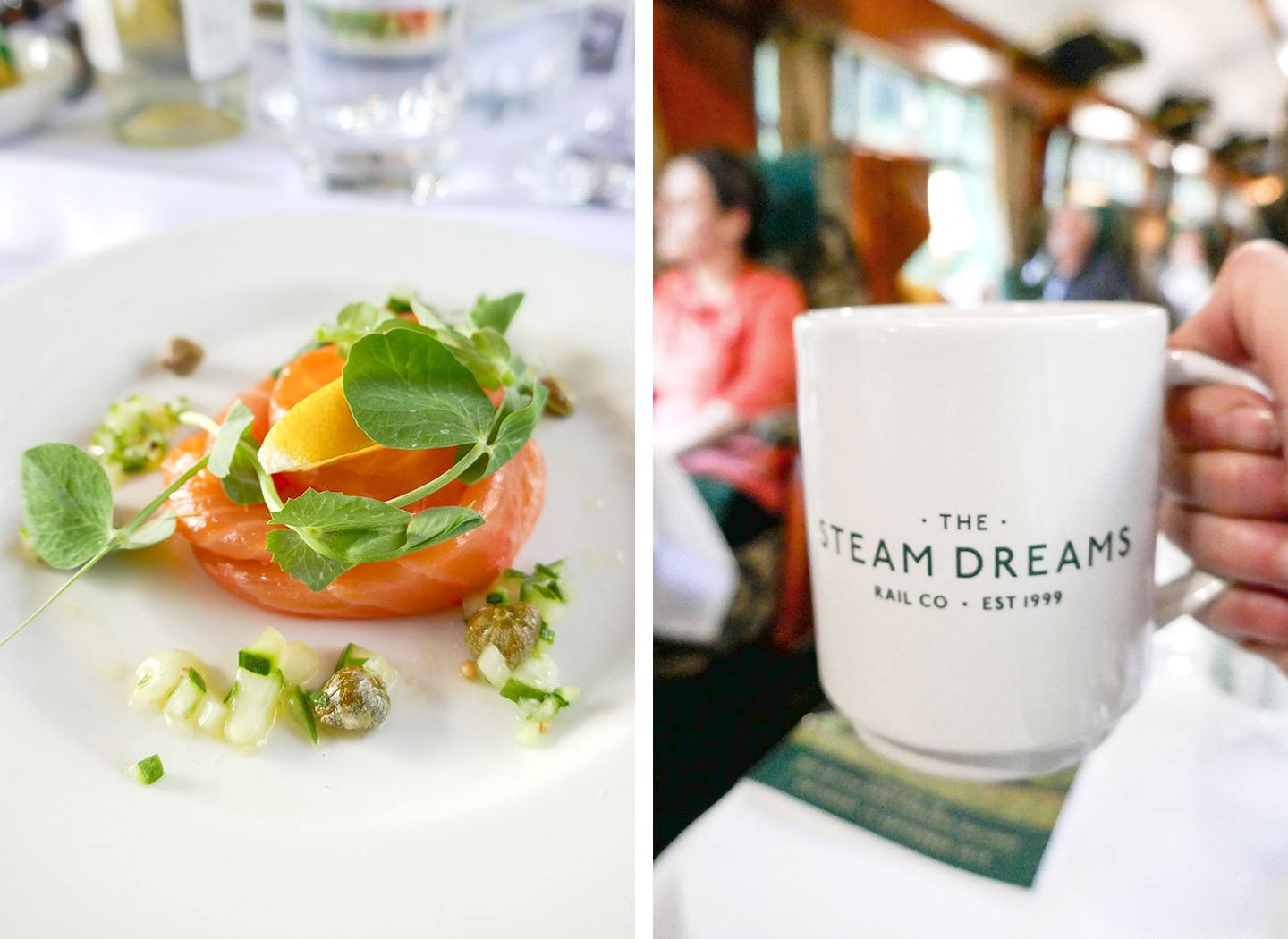 Eating and drinking on board

Our London to the Settle and Carlisle Railway steam train day trip cost £279 per person in Pullman Dining or £219 in Premier Dining, which both have meals included. First Class cost £169 and includes a glass of Champagne, tea or coffee and cake, or Premier Standard cost £119, including tea and coffee. In both of these you can order food and drinks on board.

Steam Dreams run a range of other steam train day trips across the UK, as well as longer holidays by steam around Britain and beyond. My dad and I both loved the trip and would definitely do another – and it would make a great gift for a train (or scenery) lover, with gift vouchers available if you can’t decide where to go. My only criticism is that it would be good to have more routes starting in places other than London, but you can often join en route.

On the environmental front, steam trains aren’t the most eco-friendly way to travel, but Steam Dreams were the first rail charter company to be certified carbon neutral, and ask passengers to make a small contribution to help meet their environmental targets. 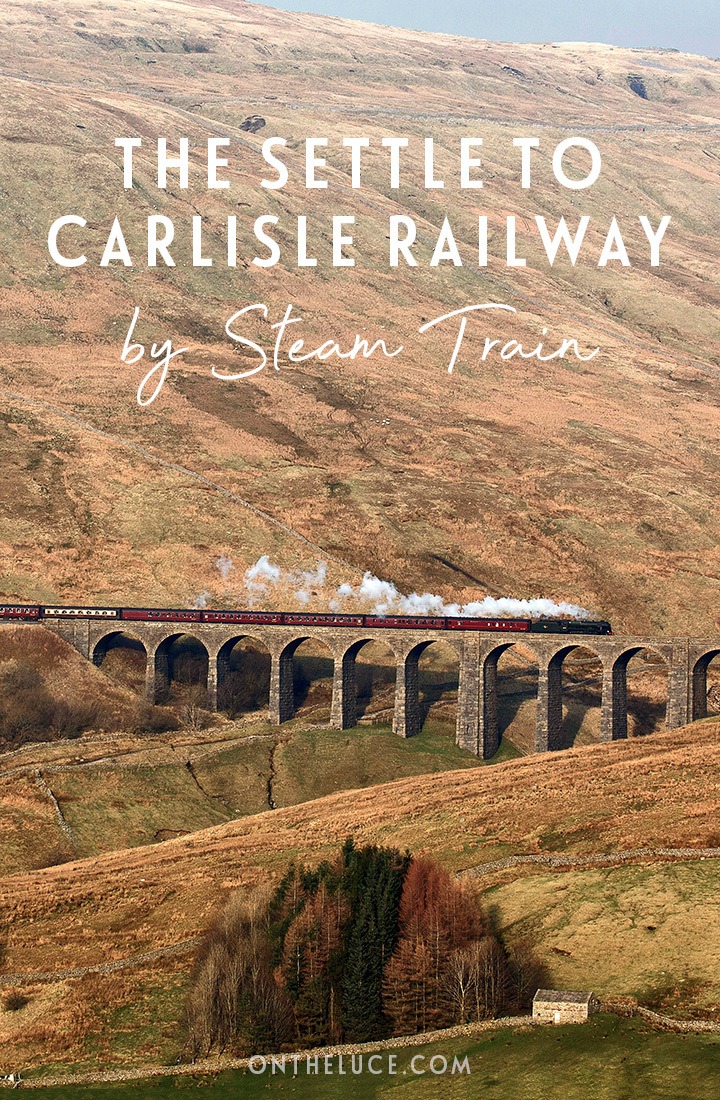 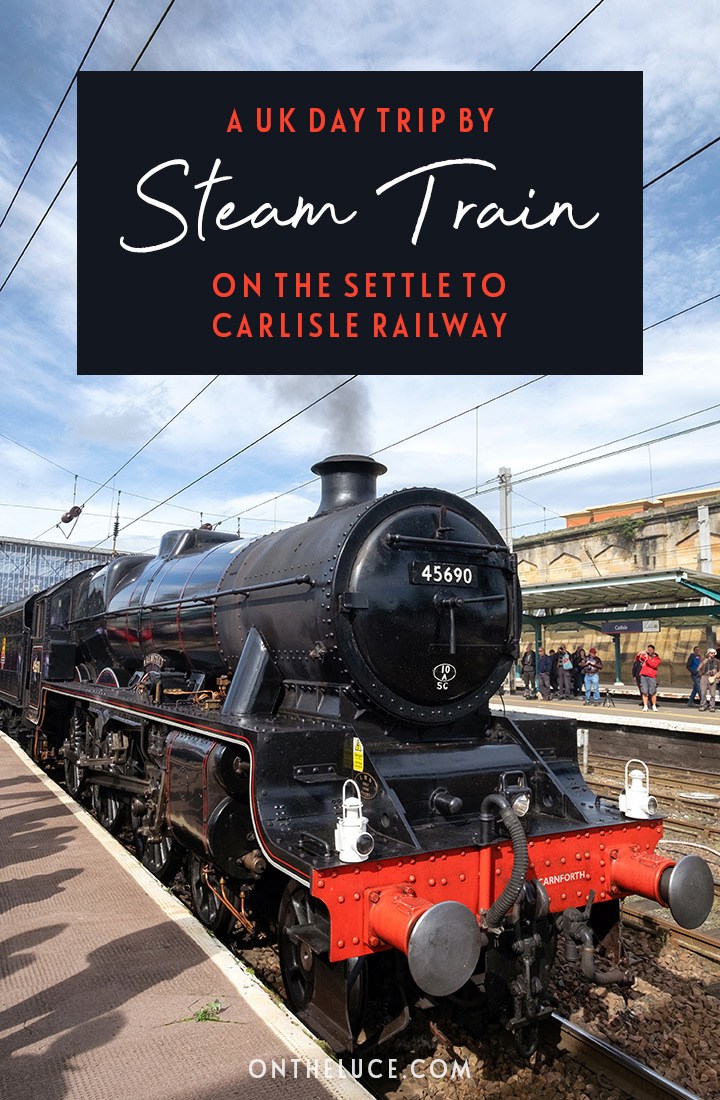