Discover the best things to do in Catania in Sicily in Southern Italy, from Baroque architecture and vibrant markets to cooking delicious local dishes and climbing to the top of volcanic Mount Etna.

Built into the foothills of Mount Etna, Catania is Sicily’s second-largest city. But when it comes to tourism, it’s often overshadowed by more famous spots like Taormina or Syracuse. Catania has a reputation for being a bit chaotic and scruffy. But that’s all part of its charm, with beautiful buildings around every corner – whether that’s a Baroque cathedral or a crumbling palazzo.

There’s a real buzz to the city too, from the frenzy of the morning fish market to the bars and restaurants packed with students from the city’s university by night. It makes a great day trip during your stay in Sicily. So here are some of my favourite things to do in Catania.

The best things to do in Catania, Sicily

Mount Etna has left it’s mark on Catania in more ways than one. In the 1660s a huge eruption and earthquake wiped out most of the city and killed over 30,000 of its inhabitants. Catania was rebuilt in the decorative Baroque style you can still see today, with wide streets, huge piazzas and endless ornate churches and palaces, all built using Etna’s black volcanic rock.

The Centro Storico (historic centre) is dotted with Baroque masterpieces, centered around the Piazza del Duomo – a UNESCO World Heritage Site. The square is overlooked by the elaborate Cathedral of Sant’Agata, designed by Gian Battista Vaccarini. Sant’Agata is Catania’s patron saint and is honoured with a huge festival and procession on 5 February each year.

The Piazza del Duomo is also home to the quirky Fontana dell’Elefante, with a black lava elephant balancing an Egyptian obelisk on its back. The city’s main architectural sights are easily walkable from the Piazza. Head down Via Etnea to the Basilica della Collegiata or past palaces and churches on Via Crociferi. The Centro Storico has lots of interesting little backstreets to explore too, with peeling paint and rusting ironwork giving them a feeling of fading grandeur.

Sicilians love their food, and the reason it tastes so good is because of the fantastic local produce, much of it grown in Mount Etna’s fertile soils. Its markets are overflowing with local, seasonal produce, and whether you’re self-catering, picnicking or just want to soak up the atmosphere, a trip to the markets is one of the top things to do in Catania.

La Pescheria one of Italy’s biggest fish markets, open every day 7am–2pm except Sundays. The atmosphere has hardly changed in hundreds of years. Makeshift tables are piled high with weird and wonderful fish and seafood. It’s a hub of chaotic activity as stallholders haggle with customers over prices and compete to see who can shout the loudest.

Fishmongers wielded dangerous looking cleavers, slicing thin steaks from giant tuna on chopping boards marked with blood and knife marks from years of use. They line the fish heads up to show how fresh the produce is (though watch where you stand and wear closed shoes).

At the entrance to the fish market is the Fontana dell’Amenano. This fountain marks where the Amenano river used to run before it was buried by Etna’s 1669 eruption. As well as the fish market there’s a more general produce market selling local and seasonal fruit and vegetables, meat, cheese, spices and dried fruits.

Colourful stalls spread down into the narrow alleys with boxes piled high with delicious ingredients. There are cheeses and mushrooms brought down from the mountain villages, as well as fruit and vegetables from the fertile soils around Mount Etna. It’s the market you’ll wish you had at home.

Go back to Roman times

Catania has been ruled by the Greeks, Romans, Byzantines and Spanish over the years. And you can still see some of the remains of its Roman occupation. Catania’s second-century amphitheatre was the second biggest in Italy – only beaten by the Colosseum in Rome. Most of it was buried in the 1693 earthquake, but you can still see a section in Piazza Stesicoro.

Better preserved is the lava rock Graeco-Roman Theatre and Odeon, tucked away among the houses on Via Emanuele II. The theatre held 7000 spectators and the Odeon was the rehearsal theatre. Artifacts discovered during excavations are on show in Casa Liberti next door.

Aperitivo time is one of my favourite Catanian traditions. Grab an early evening aperitif in a bar or café and your drink comes with plates of delicious free nibbles, like crisps, nuts, olives, dough balls, mini pizzas and arancini. They are made from balls of fried rice, stuffed with meat or cheese and coloured with saffron.

Make sure to leave plenty of room for dessert though. Sicilians love their sweets, and many of the island’s classic desserts were created by convent bakers. They combined ingredients from North Africa like sugar cane, pistachios, spices and candied fruit with cookery techniques from French pastry chefs.

One of the island’s most famous treats is cannoli. A crisp tube of fried pastry dough is filled with ricotta and honey, then decorated with crushed pistachios, glacé cherries or chocolate. There’s also cassata, a sponge cake layered with candied peel and ricotta and covered with layers of marzipan and icing.

Or there are marzipan fruits, icy fruit granitas and Minni di Sant’ Agata (aka St Agatha’s breasts, where the gory story of her being tortured and having her breasts cut off has been turned into a tasty cake complete with a cherry nipple!). Caffè del Duomo and Prestipino Boutique – which are next door to each other on Piazza Duomo – are good spots for a sugar fix.

This is an island where the most revered cooks aren’t Michelin-starred chefs in fancy restaurants but home cooks making recipes passed down through generations. Learning to cook like a Sicilian gives more than just a taste of the island’s food, but a window to lives of its people too.

Invaders over the years brought new ingredients and cooking techniques to Sicily, but the Sicilian national identity always stayed strong. You won’t find any national dishes, but instead there are lots of local specialities, from every part of the island. The cuisine today mixes old peasant dishes – cucina povera – with more elaborate dishes brought over by French chefs who worked for Sicilian noblemen. A big focus throughout though is on using fresh and seasonal produce – or ‘eating with the sun’.

One of the most famous dishes in Catania is Pasta alla Norma. This pasta dish is served with a tomato, basil, aubergine and ricotta sauce, and gets it’s name from an opera by local composer Vincenzo Bellini. Tomatoes are a huge part of the cuisine here, but when the Spanish invaders first brought them to Sicily the locals just used them to decorate the plate.

There’s also Peperonata Agrodolce – sweet and sour peppers. sweet and sour dishes, made using a combination of sugar and vinegar, were originally introduced by Arab invaders. The Sicilians used them to help preserve food in the days before refrigeration.

Get up close to Mount Etna

Mount Etna is the ever-present backdrop to the city and can even be seen from space. It’s Europe’s largest volcano and one of the most active in the world. It’s often shrouded in clouds of vapour and you can see lava flows erupting from the four craters on the summit.

If you want to take a closer look you can explore the craters and 58 acres of lava fields and forests in the Parco dell’Etna. You can take a half-day Mount Etna tour or do it yourself and catch the public bus from Catania to Rifugio Sapienza, then the cable car up to to 2590 metres high, from where it’s a 2km walk or a 4WD tour to reach the top. And don’t miss trying a glass of the local Etna wine, made from grapes grown on the volcano’s high-altitude slopes.

Most of the Catania’s seafront is filled with its busy harbour, but you don’t need to go far to get a taste of sea air. Just north of the city you’ll find a string of former fishing villages, where dark volcanic rocks meet the clear turquoise waters of the Ionian Sea. They’re around 10km north of Catania, with the 534 bus connecting it to the villages of Aci Trezza and Aci Castello.

Off the coast at Aci Trezza you can see three tall, rocky outcrops known as the Cyclops Islands. Legend has it they were formed when the king of the Cyclops threw giant rocks at Odysseus. And at Aci Castello a towering rocky cliff is topped by Norman castle carved from lava rock, which dates back to 1076 when it had a strategic position guarding the Messina Straits.

Looking for somewhere to stay in Catania? 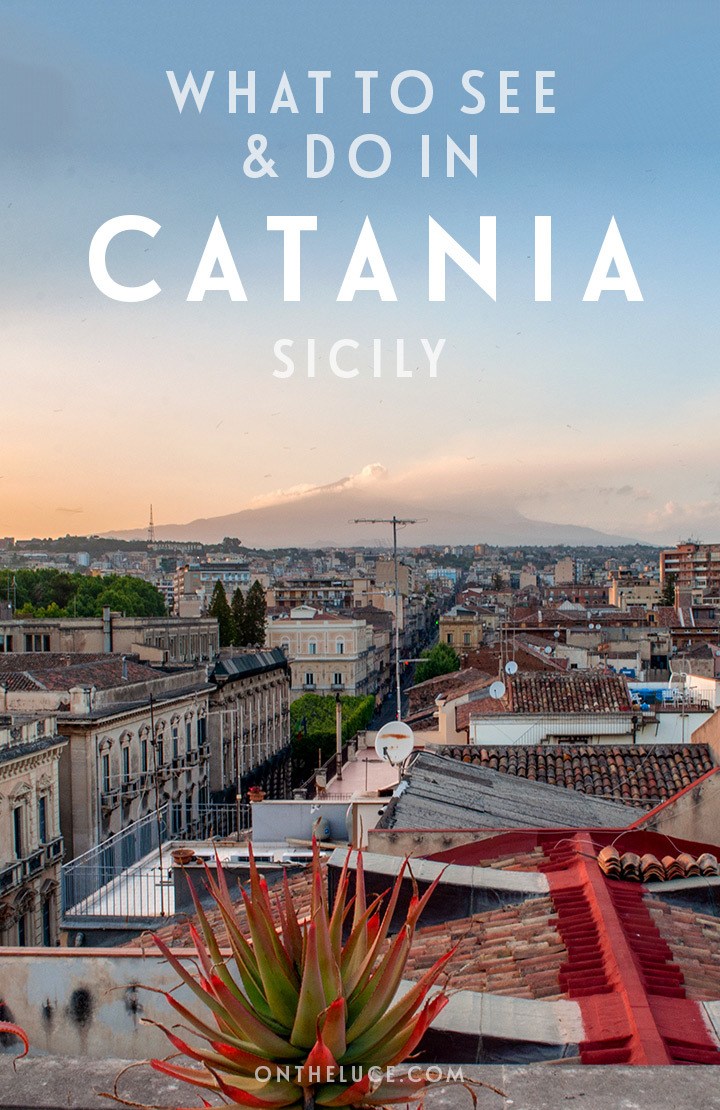 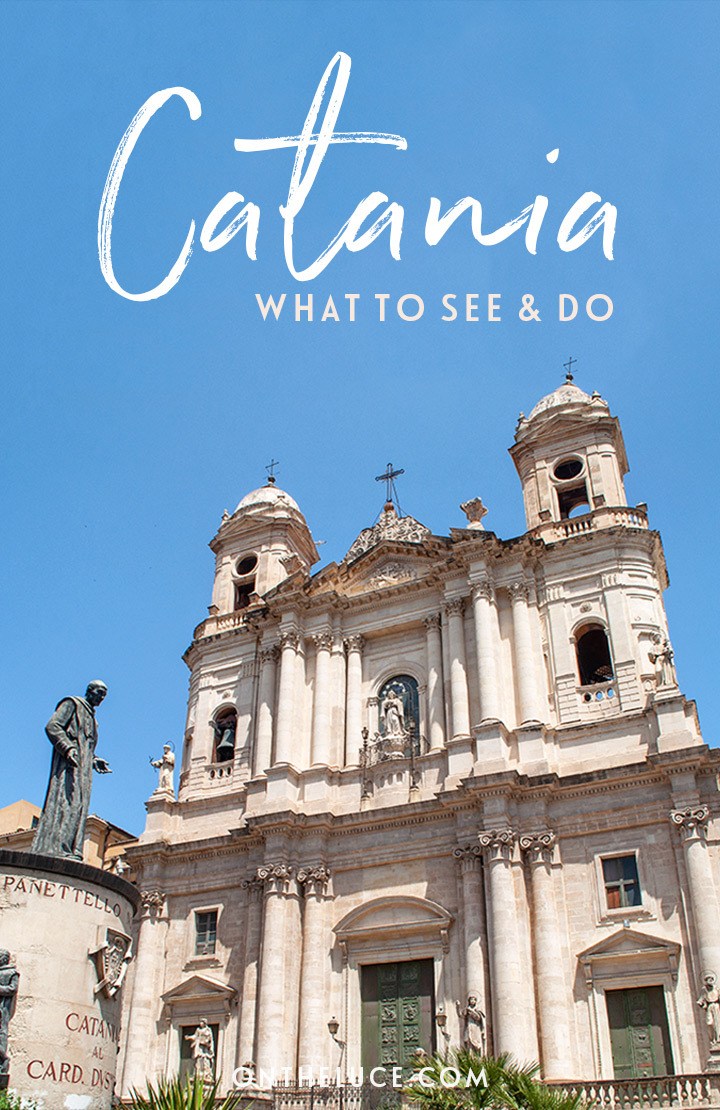 Sirens and sunsets: The best things to do in Sorrento, Italy

Great post. We've been to Catania and at the beginning, we regret our decision to be there but finally, we are in love with this city. For sure we will come back and visit places we haven't been like Etna volcano. It is so amazing city and we've brought a lot of great memories to our blog. Maybe you will find some inspirations there? Keep calm and wayamaya

It's a great place! Hope to get back ans see some more of Sicily sometime soon.

Excellent stuff! Off to Catania in a fortnight and this will come in handy! Thanks very much

I love Sicily. I am of Sicilian decent, 76% Italian. We cant wait to return.

Have a brilliant time!

I love Sicily but I've not made it to Catania yet. It looks like a great place to explore and I always love food markets. The volcanic coast looks really interesting too. Hopefully, I'll get back to the island one day.

The food there was just fantastic! It's definitely made me keen to see more of Sicily.

Sicily has been close to the top of my list for quite a while. I love your suggestions in Catania and am bookmarking for future reference. Thanks!

Thanks Alison, I really enjoyed visiting and would love to go back and see some more of the island soon.