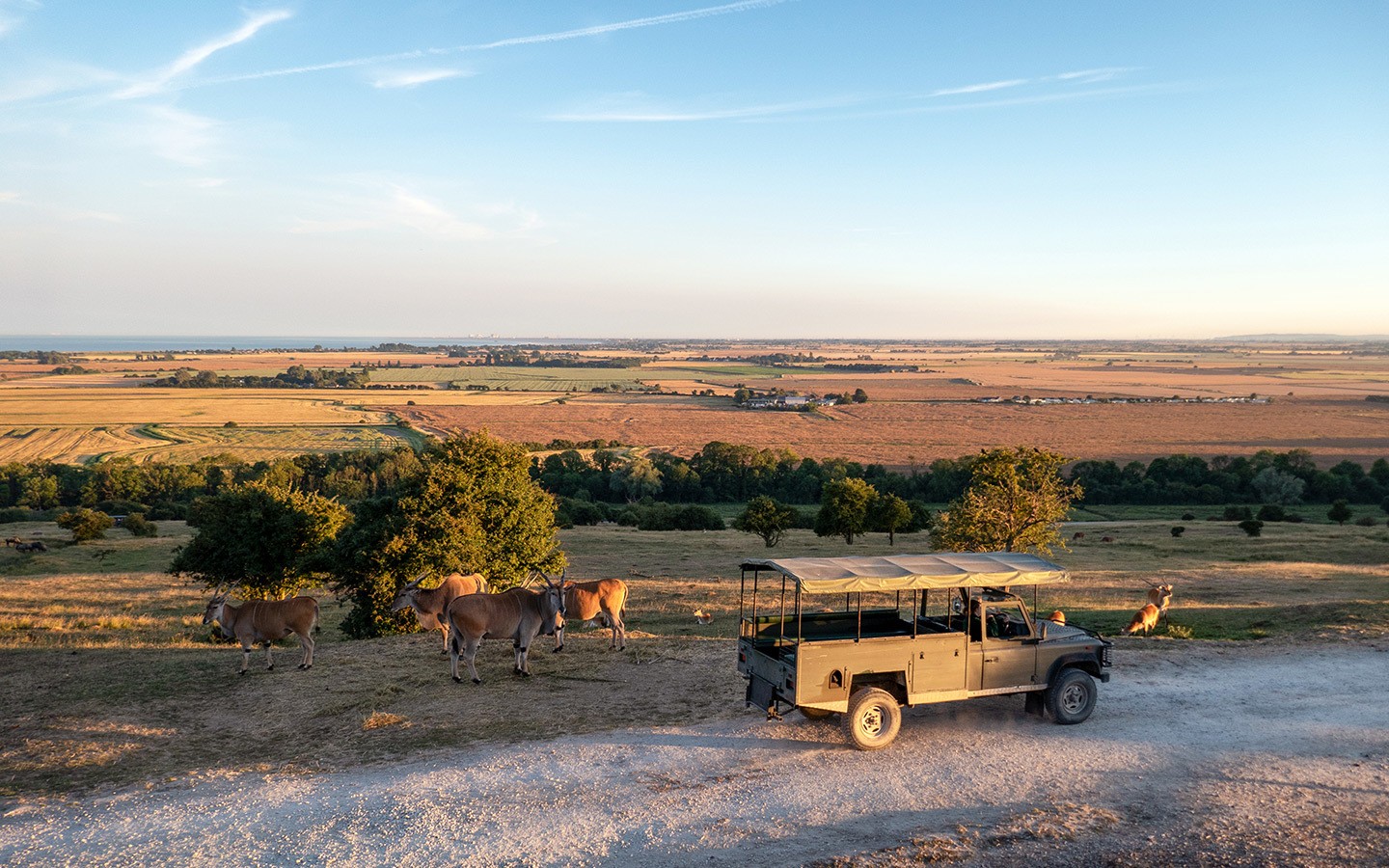 The golden rays of late afternoon sun are beating down onto the park’s dry, bleached grassland. A pair of zebras are reflected in the still surface of the watering hole as they drink. A safari truck rumbles along a stony track towards a family of giraffes. You hold your breath as a black rhino wanders past just a few metres from the entrance to your tent. And way in the distance you can see the blue waters of… the English Channel? Yes this picture-perfect safari scene isn’t somewhere in South Africa, Namibia or Tanzania. It’s actually in Kent on England’s south coast, where Port Lympne have brought Africa to the UK. 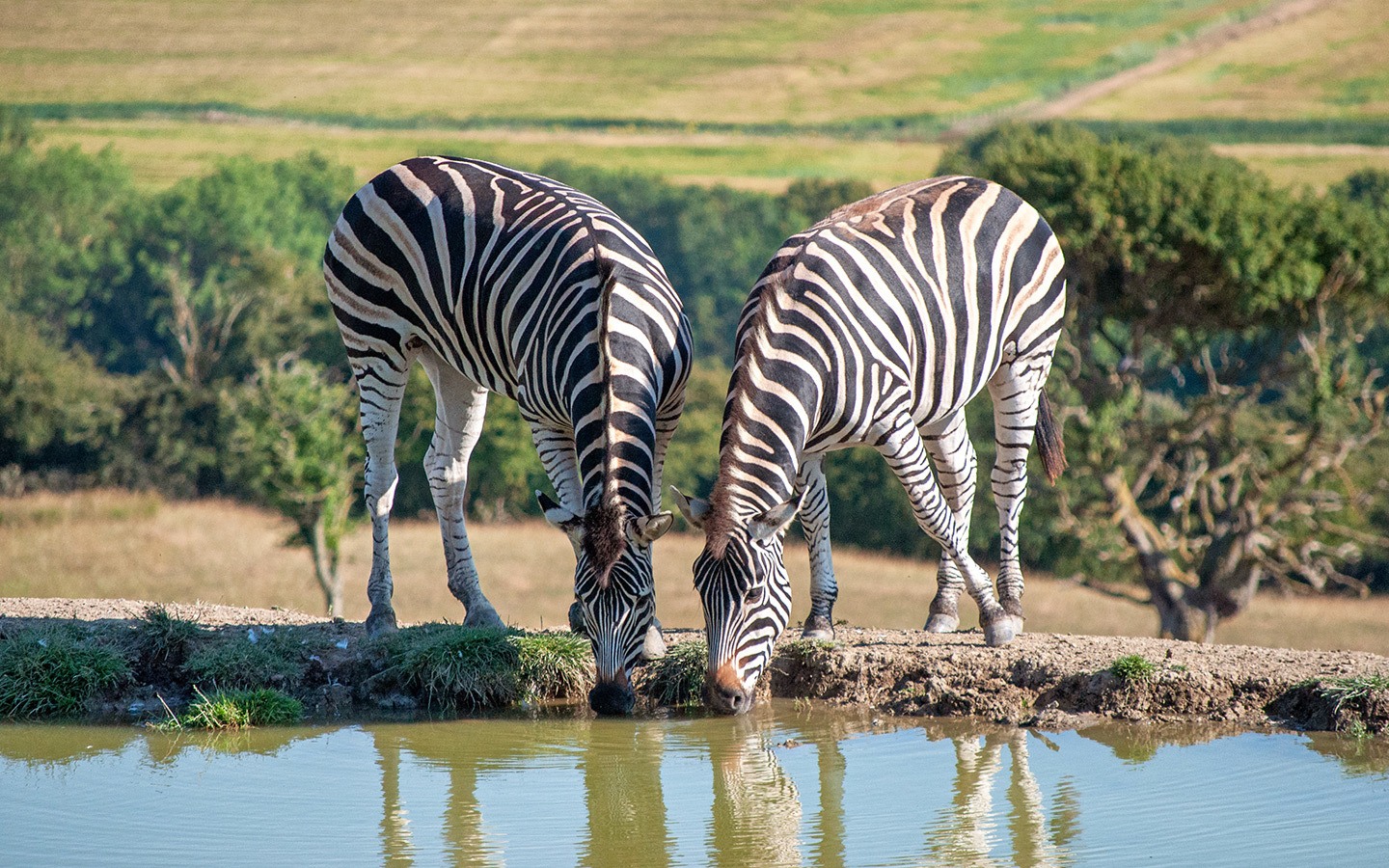 Zebras at the watering hole

Port Lympne Reserve started life as an Edwardian mansion house and gardens. In the 1970s it was bought by zoo-owner John Aspinall, who needed extra space to expand nearby Howletts Wild Animal Park. Now the park is home to a huge variety of animals, including tigers, lions, leopards, gorillas, bears, giraffes and the UK’s biggest herd of black rhinos. A lot of people are rightly cautious when it comes to visiting zoos, but there’s a real focus at Port Lympne on conservation and breeding animals to release into the wild. It’s run as a charity and most animals are in open enclosures rather than cages so it doesn’t feel too zoo-like. 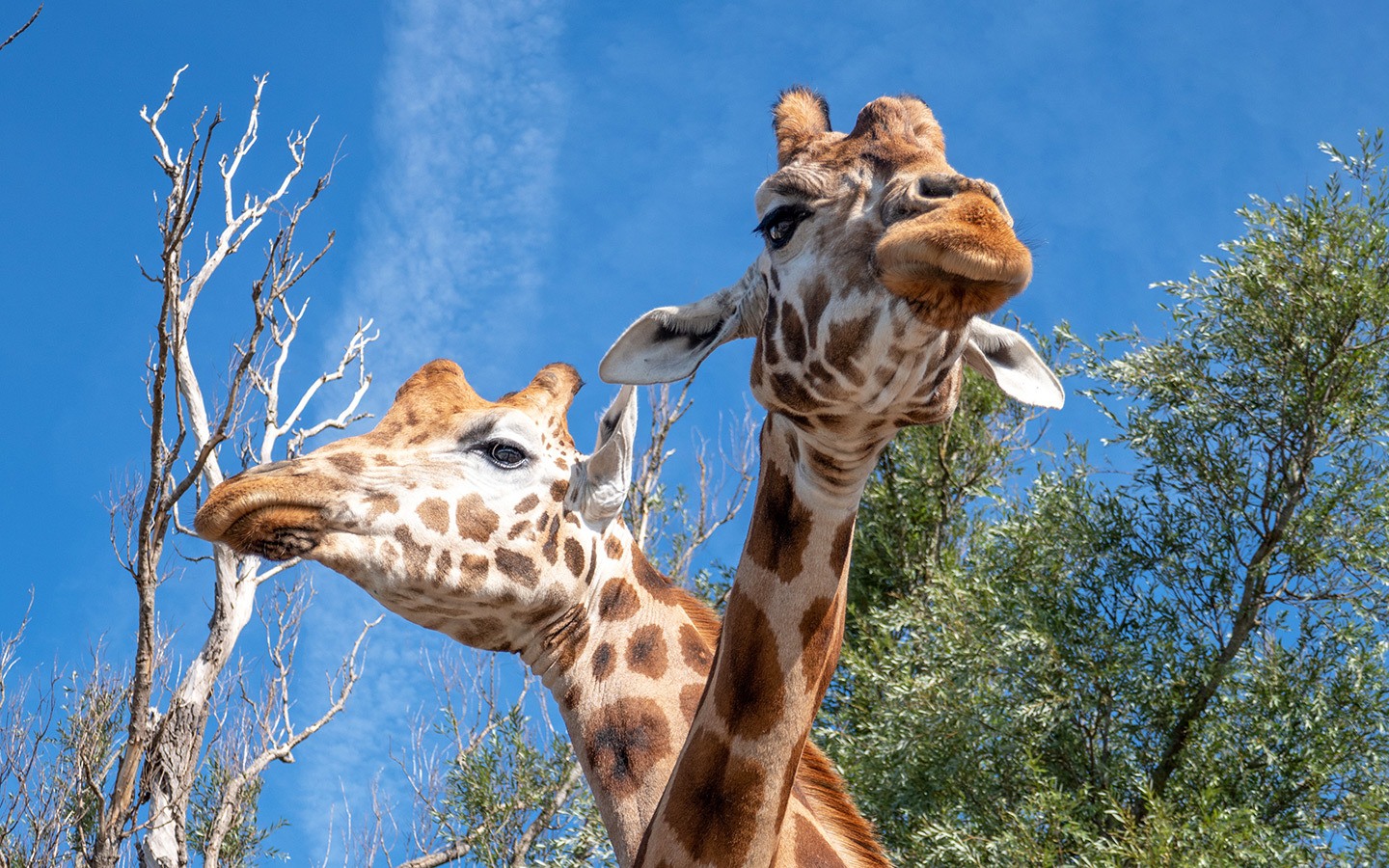 As well as being a wildlife park, you can also stay on site, in some cases right with the animals. There’s the luxury Port Lympne Hotel in the original mansion, but there are also lots of quirky places to stay – from wooden camping pods and treehouses to glass bubbles and lodges with glass walls onto the animal enclosures. But much as I’d have loved to spend the night with the big cats at Tiger Lodge, the eye-watering £1000-a-night price tag made it a no-go. So instead we went for Giraffe Lodge, a tented camp where you get the whole safari experience, from game drives and sundowners to a South African braai dinner. 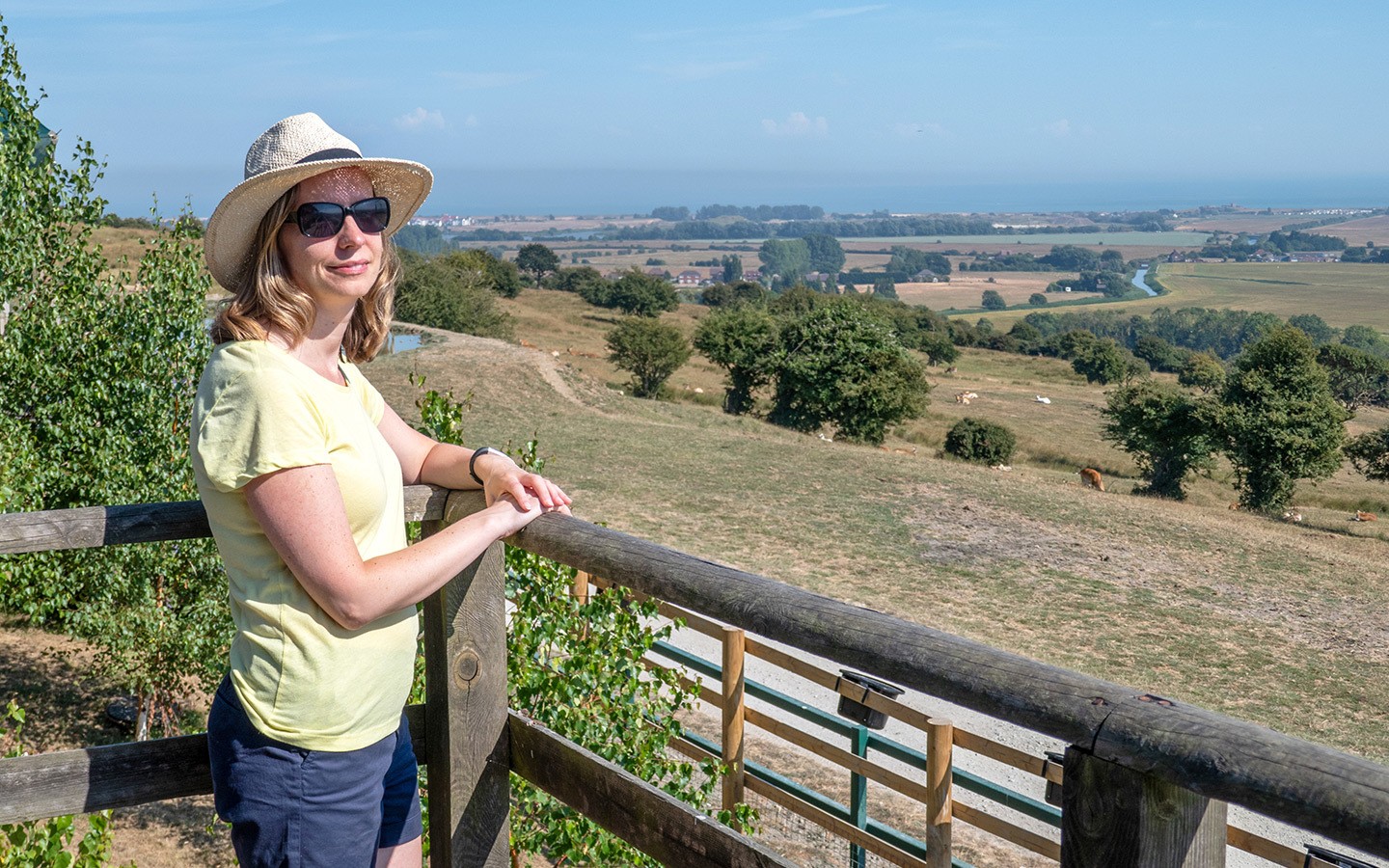 On safari in the UK

The safari experience starts at 2pm, but if you get there earlier you can go and explore the park first – entrance to Port Lypmne and its sister park Howletts are included in your stay. Or you can do what we did and head to the Port Lympne Hotel for a G&T on the terrace (getting into the safari spirit). It’s a beautiful setting with gardens and fountains with views out across Kent’s Romney Marshes. After dropping our bags off to be delivered to our tent, we met our fellow guests and ranger Will for our first game drive. 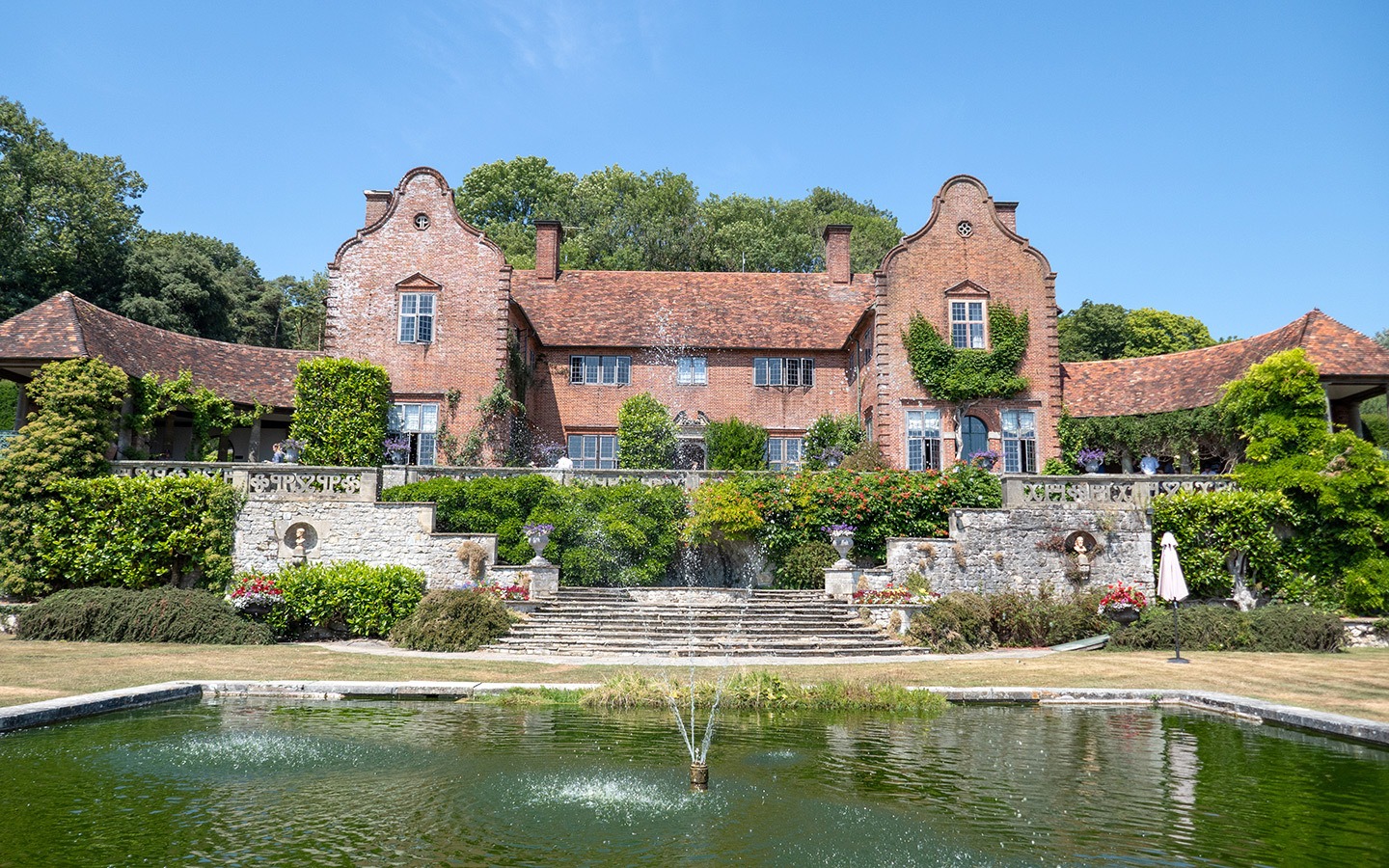 The park is split into two sections – there’s one section you walk around with pens for primates and carnivores like the big cats. Then there’s the safari section with huge enclosures which you drive around in an open-sided jeep. Because the park covers 600 acres and has almost 90 different species of animals, it really does feel like you’re on a real safari as you never know what you’re going to see. We started off in the rhino enclosure, where we saw the park’s new baby black rhino – the 40th born here. Then it was on into the South American and Asian enclosures, with a real mix of animals from the bizarre-looking capybara and fluffy vicuñas (similar to an alpaca) to Indian barasingha deer and some friendly camels. 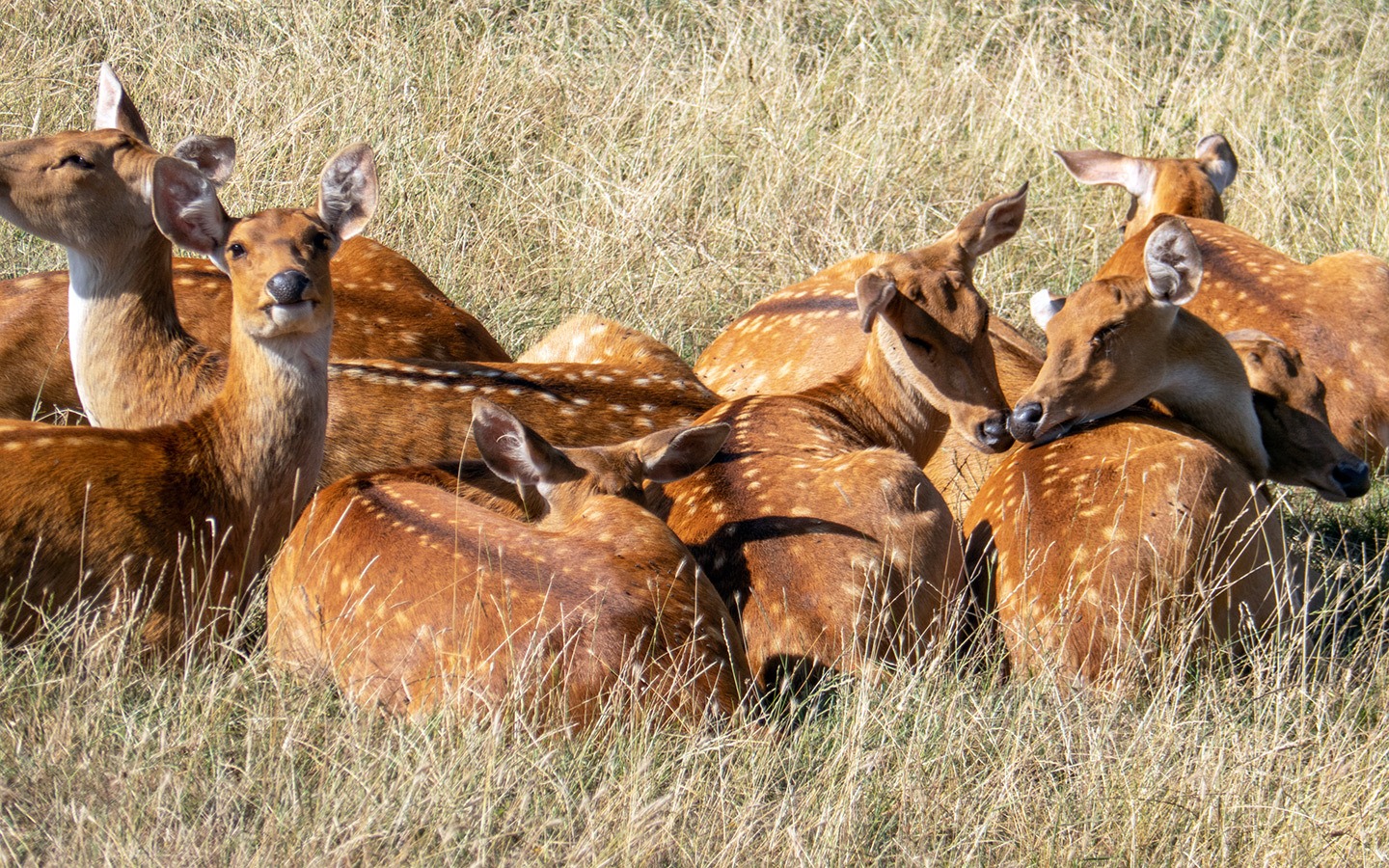 It was really useful to have Will on board – not only to tell us what we were looking at but to answer all our questions about the animals. Despite our best efforts we didn’t manage to stump him once. The final part of our game drive was in the African Experience, 100 acres of savannah grassland. We bumped our way along rough tracks alongside zebras, wildebeest, rhinos and ostrich. In the middle of a UK heatwave the sun and dry grass made it feel even more like we’d been transported to Africa. On the top of the hillside overlooking the enclosure we could see a row of wood and canvas safari tents – our home for the night. 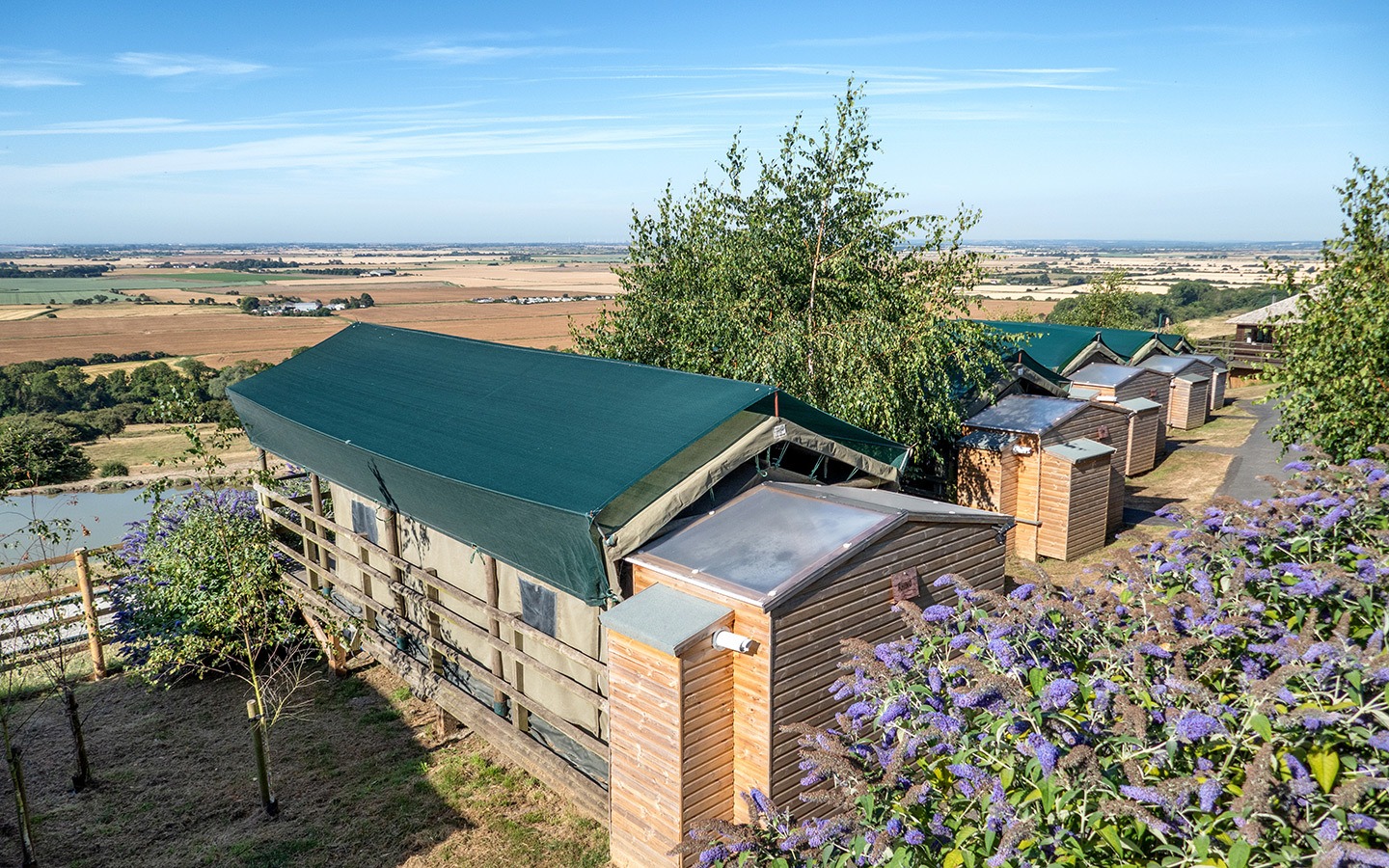 Giraffe Lodge (previously known as Livingstone Lodge) is made up of two rows of tents, built of canvas with a wooden base and balcony where you can watch the animals right from your room. It might be a tent, but you’re definitely not roughing it – this is much more glamping than camping. There’s a choice of en-suite tents or a few sharing a bathroom block, and each tent is named after a different animal. Our Rhino tent had proper wooden furniture with a four-poster bed, towels, dressing gowns and toiletries supplied. 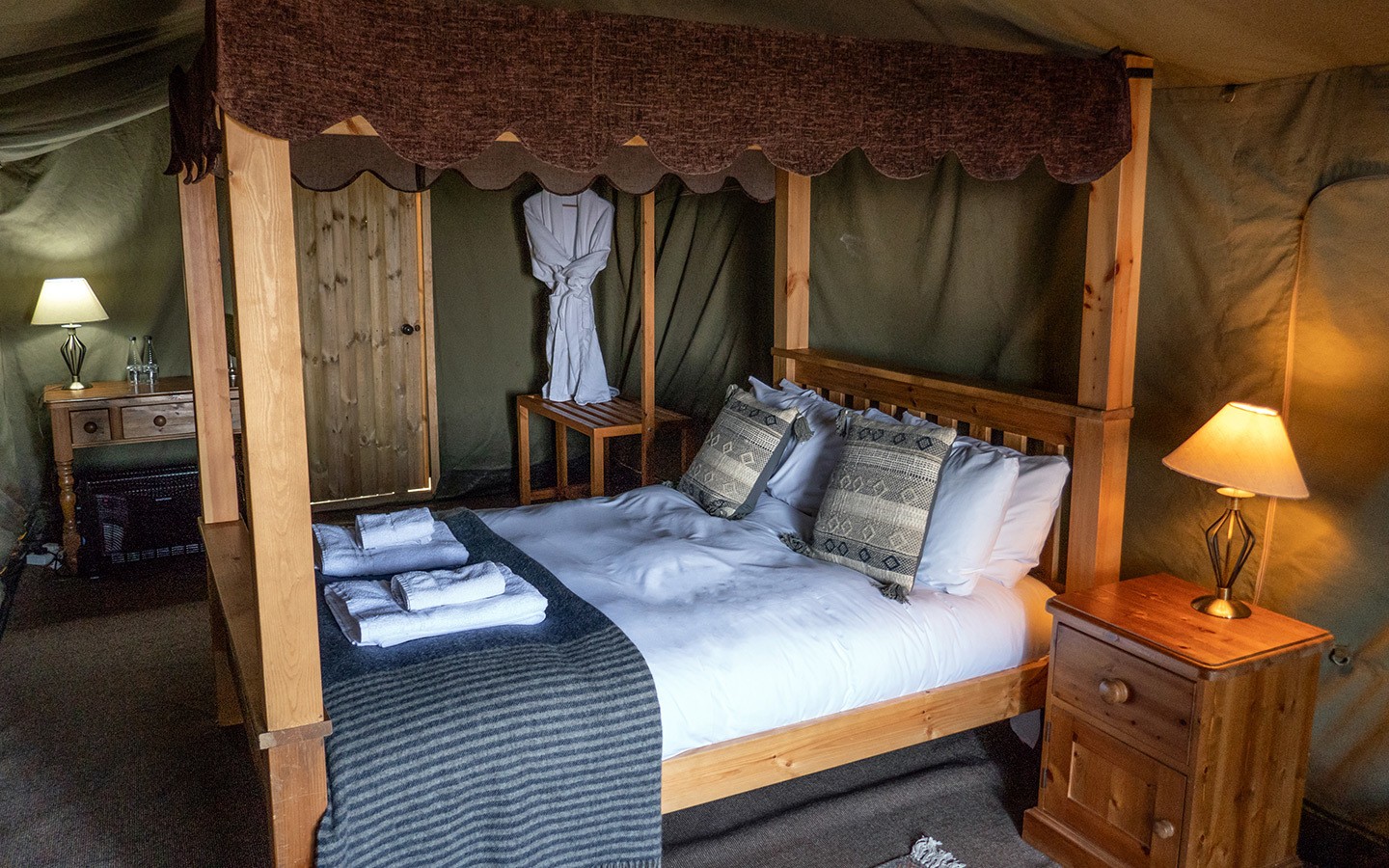 Out the back was an en-suite shower room, and the tents even have their own boilers so there’s plenty of hot water (though the combination of a clear roof and sun meant it was a bit like an oven out there during the daytime). Even on a really hot day it does get chilly at night. But the beds have thick duvets and a heater if things get really cold – and pack a jumper for the evenings and early mornings outside. Because with so much going on right outside you’re not going to want to spend too much time inside your tent. 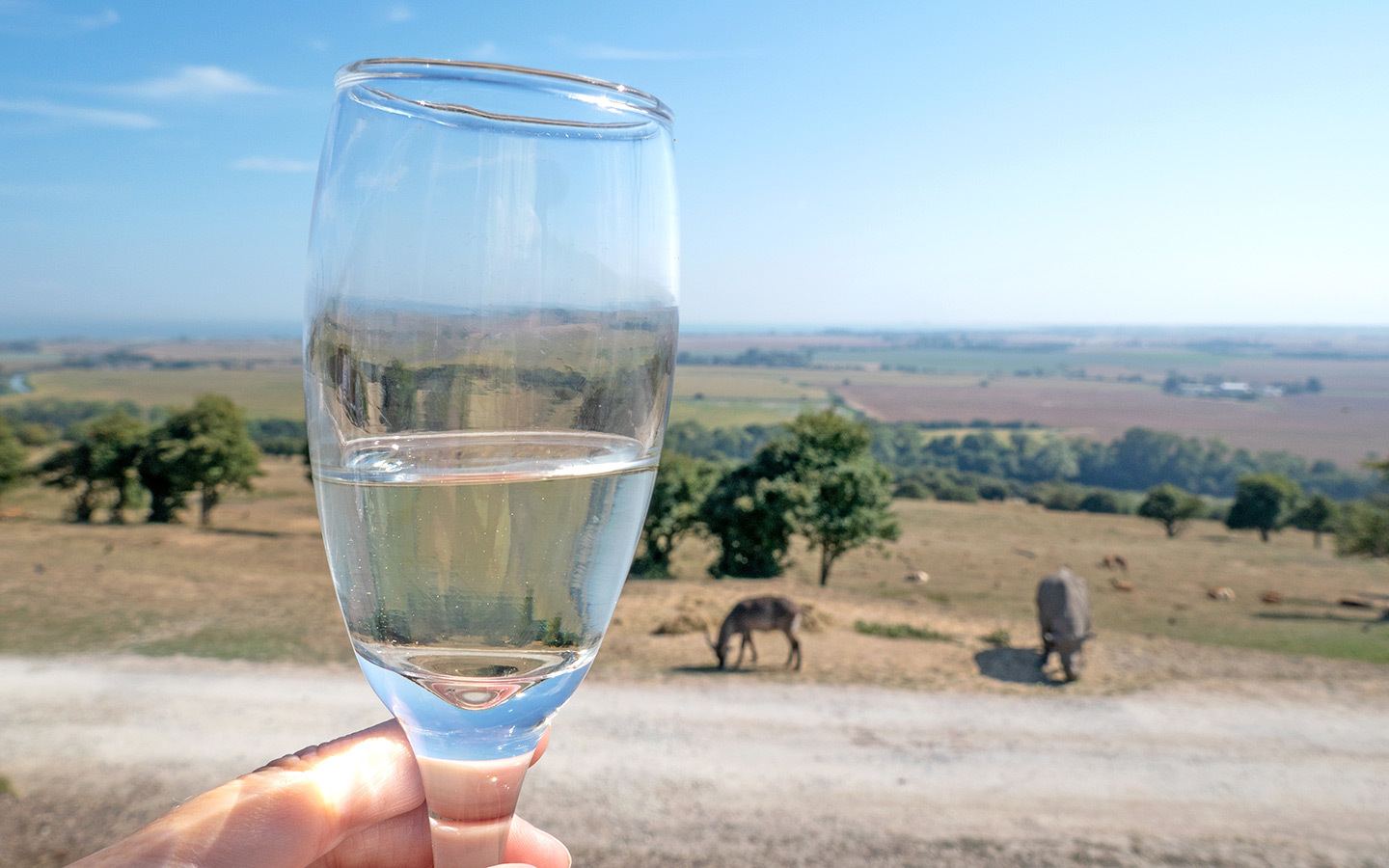 A drink with a view

At the end of the row of tents is the Laapa – the camp’s communal lounge and dining room. It’s modelled on a safari lodge with lots of dark wood and African artefacts, and a big fire pit in the middle. All guests eat and gather here so it’s really sociable. At maximum capacity there would be about 18 people staying but on a Sunday night there were only six of us so there was tons of space. We all gathered on the Laapa balcony for our welcome drinks and ended up staying there for hours watching the animals in front of us.

The best thing about the camp was that the landscape is always changing. You stay still and the animals come to you. We got to know Zambezi the black rhino – his favourite spot for a snooze in the sun and how he might be big but he still runs away when it comes to a face off with one of the Eland deer. And learnt how the zebras are the Mean Girls of the savannah – they might look pretty but they can be vicious. But what about the giraffes? The lodge is called Giraffe Lodge as there are a herd of rare Rothschild giraffes in the African enclosure, and often they come and feed just outside. But this time they made us wait. 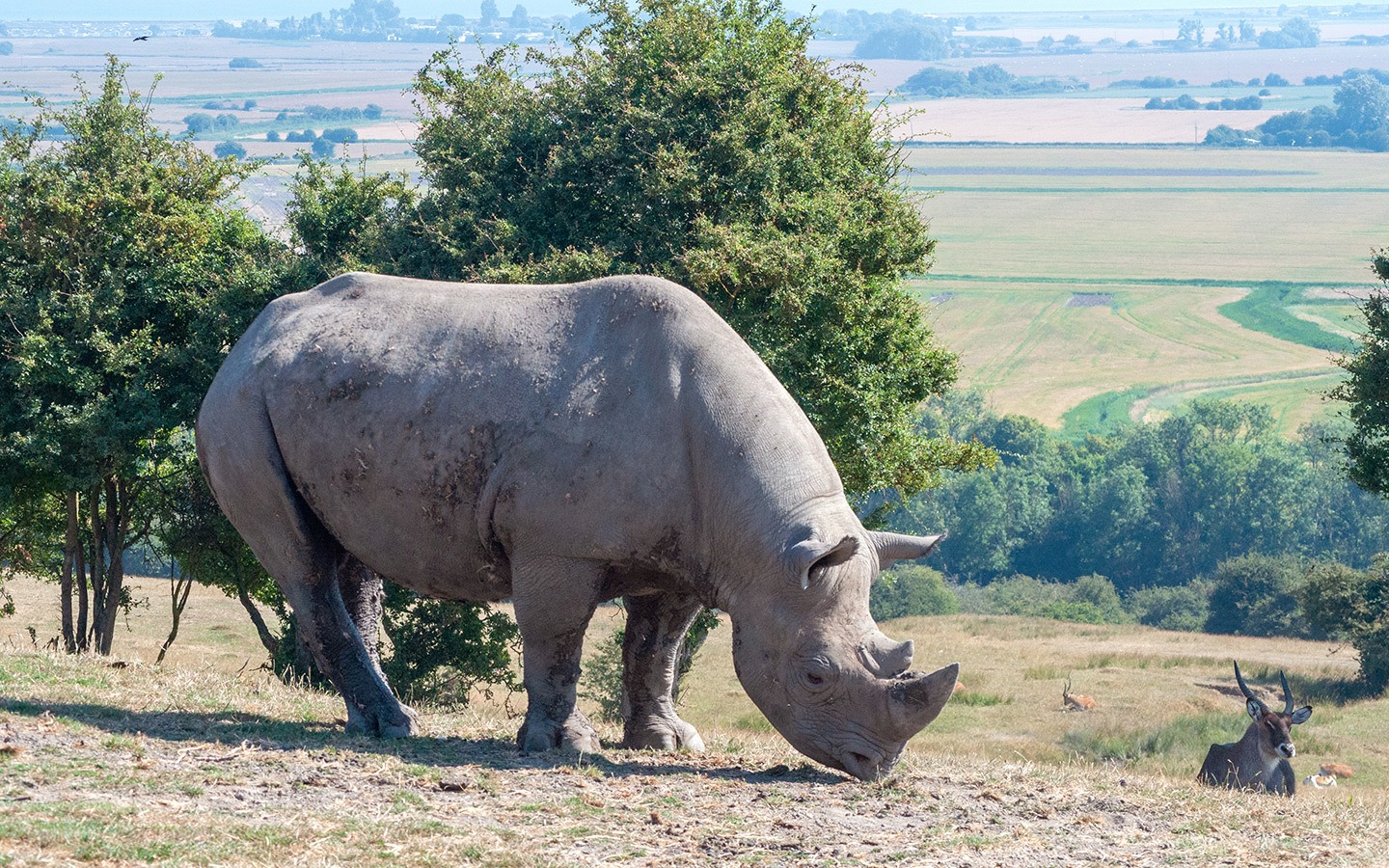 All the guests at the camp eat dinner together, with an South African braai barbecue. There were an amazing array of dishes, with vegetable curries and salads as well as steak and sausages cooked on the open fire. Drinks other than tea and coffee aren’t included but wine was fairly reasonable. And right on cue, just as we finished dessert and were contemplating a post-dinner Amarula, a family of giraffes called by just in time for sunset. Once the sun goes down and it’s dark the place is incredibly peaceful. The lodge staff drive off and you’re left on your own – well almost, there was a bit of mid-night munching from the locals. 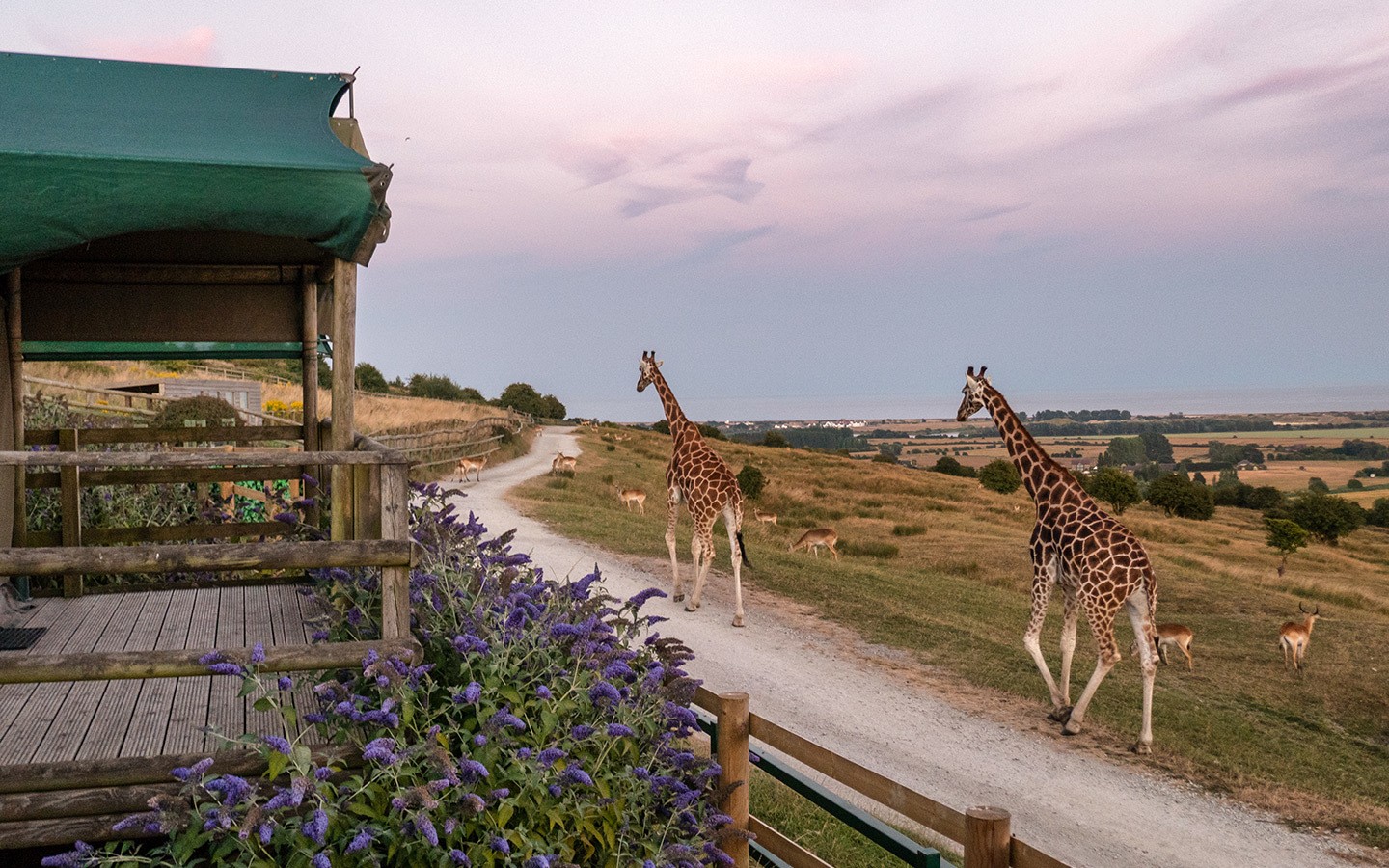 Breakfast with the giraffes

My big plans for getting up for sunrise the next morning were thwarted by how cosy the beds were. But it’s worth dragging yourself out of bed as early as you can bear to watch the park get light and the animals at their most active. After a big cooked breakfast, we packed up our bags and took our second game drive through the rest of the park. But along the way we made a special stop at the giraffe enclosure where we got to hand feed the Rothschild giraffes. It’s a rare chance to get up close to these graceful creatures. Though they aren’t quite so graceful when they eat – they can strip the bark off a twig in seconds!

A stop off at the giraffe enclosure

So how does a UK safari at Port Lympne live up to the real thing? Of course the animals aren’t in the wild, but many private game reserves are fenced too and it’s a great chance to see rare animals up close beyond the normal zoo setting, without having to fly halfway across the world. But the gorgeous weather helped – it wouldn’t have had quite the same Out of Africa feel among the English drizzle. It’s not a budget break, but it’s a special experience you’ll always remember, so would make a great present for a big birthday or anniversary. And it has to be the nearest you can get to going on safari without leaving the UK. 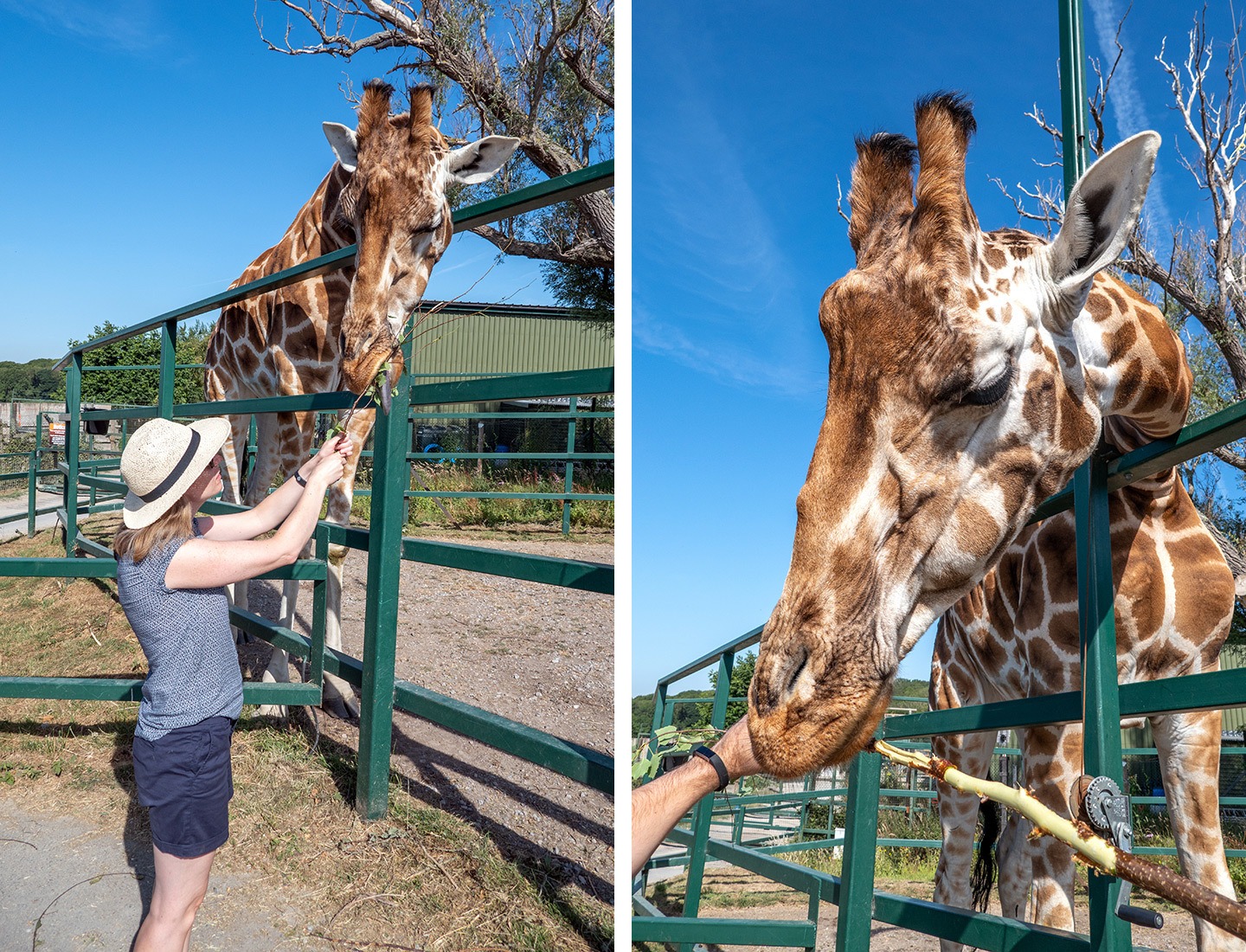 A one-night stay at Port Lympne’s Giraffe Lodge costs from £395 (midweek) to £545 (weekends) per night. Our front row, en-suite tent cost £495 for two people on a Sunday night in July. Park entry, a welcome drink, dinner, breakfast and two guided game drives are included. The lodge is usually open between the end of March and mid-October each year, but it’s closed on Mondays and Tuesday nights.

There’s tons of parking in the park, but if you want to get there by public transport, you can take the fast train from London St Pancras to Ashford International. It only takes 36 minutes, or the normal trains from London Victoria or Charing Cross take 1 hour 20 mins. Then you can take the number 10 bus from the station, which runs between Ashford and Folkestone and calls just outside the park. 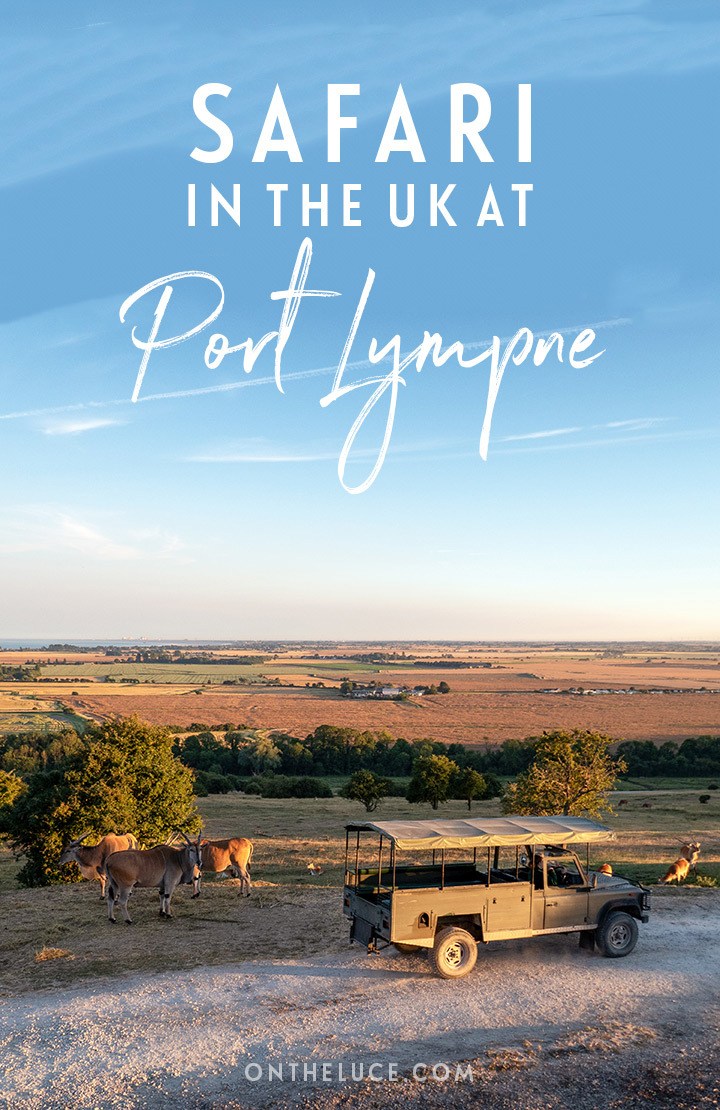 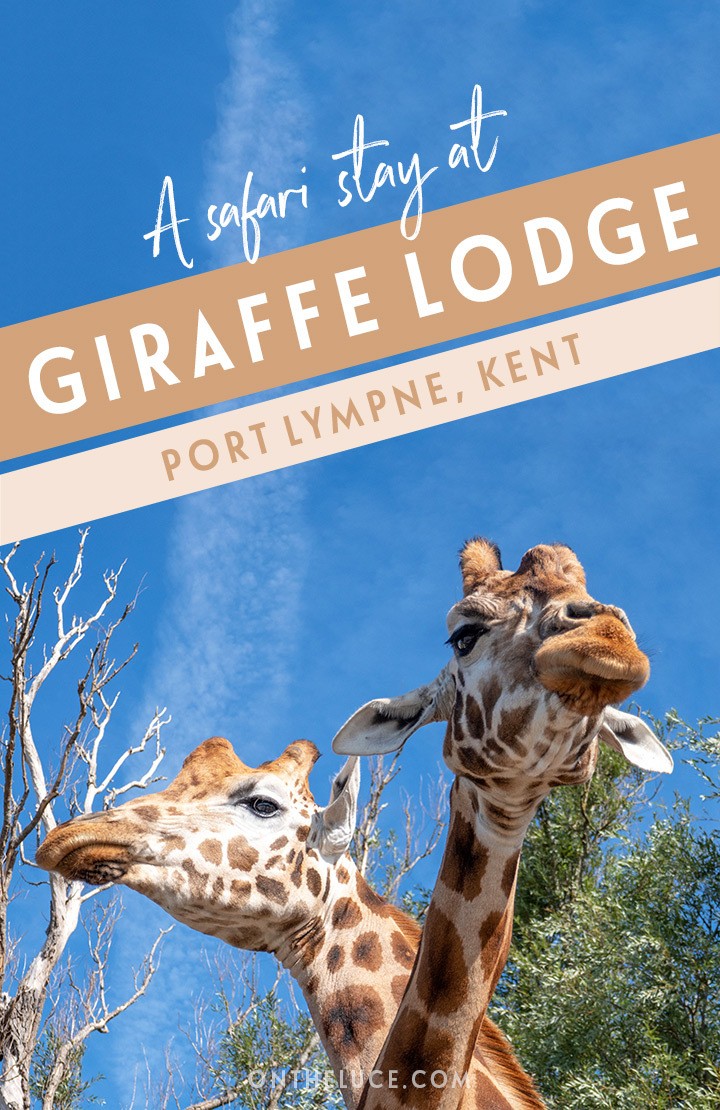 Thanks for the post, which has drawn my attention. We were down in that part of the country over the summer, as my daughter and her family live in Kent, so could have easily done a day visit. Next time this one is on my list. It will make a great day out experience for our grandchildren. Personally, I would like to stay over in the Lodge, as we are from South Africa and have been in the U.K 22 years.

Hope you enjoy it! It's a bit different to being in South Africa for real but I thought they'd done a really good job at making it feel like you were on safari.

I love the idea of this as a day out.

It's a really unusual experience but great fun!

It's hard to believe that this is in the UK!

Thanks, it was such a great experience!

I haven't heard of Port Lympne - but it looks amazing! It looks as though the animals have plenty of room to roam - which is great, as like many people I'm cautious about visiting animal attractions. And the heatwave really has made Kent look more like Kenya!

It really did feel like we'd been transported to Africa!