On the Death in Paradise location trail in Guadeloupe

Outside the rain’s lashing down, the wind’s blowing a gale and the temperature is well below freezing. So you turn on the TV to be greeted with sunny skies, sandy beaches, palm trees and colourful streets (plus a dead body or two, but we’ll skate over that bit). On air during the worst of the British winter, it’s no wonder the BBC TV series Death in Paradise has become so popular, with its tenth series hitting screens in January 2021.

Yes this series about a slightly bumbling British detective solving murders on a Caribbean island might be a bit formulaic and you do have to wonder how many people can possibly be knocked off on this one tiny island. But when it’s cold and grey outside, Death in Paradise is like a dose of virtual sunshine being beamed into your living room.

Read more: A guide to Guadeloupe: Where France meets the Caribbean

Where is Death in Paradise filmed?

The series is set on the Caribbean island of Saint-Marie, which supposedly lies just off the coast of Guadeloupe. But you’ll have trouble tracking it down on any map. Saint-Marie island is just a figment of the writers’ imagination, but those gorgeous locations you see on screen do exist, and in reality most of them are found on Guadeloupe’s Basse-Terre island.

Death in Paradise is what first introduced me to Guadeloupe, so I couldn’t resist tracking down some of its filming locations when I visited the island. But would everything be as picture-perfect as it looks on screen or is there any TV trickery?

Where are the Death in Paradise locations?

On the north-west coast of Basse-Terre, Deshaies is the epicentre of all things Death in Paradise in Guadeloupe. In the show it’s Honoré, the capital of Saint-Marie, and is also where the cast and crew are based when they film in Guadeloupe for six months each year.

Deshaies is the pretty town you see in the aerial shots, with a red-roofed church and colourful buildings set around a semicircular bay and surrounded by jungle-covered hills. In real life, it’s a fairly sleepy fishing port with waterfront bars and restaurants that are a favourite stop for yachties sailing the Caribbean – and definitely not a hotbed of crime.

One thing I discovered when I started looking for Death in Paradise locations is just how many of them are in and around Deshaies. As well as the main filming sites, it also crops up as the harbour where people arrive or leave the island, it’s in a lot of background street scenes, and practically every swanky rental villa in the area has had one murder in it.

The location team have done a clever job in making a small stretch of coast look like a whole island of different locations. Which is good news if you want to explore it yourself – their concentration around Deshaies makes it easy to do a DIY Death in Paradise location tour. Or if you’re short on time or don’t have a car, there’s also a guided tour* available.

The first stop had to be the show’s most important location – Honoré police station. It’s next to Deshaies church in the centre of town, so it’s really easy to find. In real life the police incident room is Deshaies’ priest’s office, and the church hall next door is used for the cells.

It was closed and deserted when we visited so no chance of having a peek inside, but other than the Honoré police sign being missing, it looked just like it does on screen – right down to the chickens pecking around outside. Out front there’s a car park which is where they park the police jeeps, which has been used for a street market in a few episodes.

One thing you don’t see on screen though is a cemetery – and they’d clearly need one with that murder rate (though with so many British victims, maybe they’re all sent home?). There’s actually a big cemetery on a hill on the edge of Deshaies but it’s usually excluded from the filming, though you can sometimes spot it slightly out of focus in the background.

Another regular location is Catherine’s bar (owned by Catherine Bordey – mayor of Saint-Marie island and mother of original detective Camille Borday). It’s pretty much compulsory for each episode feature at least one drinking session in the bar, either mid-case when there’s a tricky problem to solve or to celebrate solving the murder (no one gets away with it!).

We found the beachside terrace used in the show (shown in the photo at the top of the post) at the northern end of the bay, just outside a restaurant called Le Madras. Le Madras was closed for the day so we didn’t get to have our beachside beer or look inside, but I did find a very tasty pina colada at another Deshaies bar with a Death in Paradise connection.

In the first series, a different, bigger bar was used as Catherine’s bar. This one is called La Kaz and is just south along the waterfront from Le Madras. Apparently filming used to block the street and hold up traffic so they had to move, but there are few photos hanging on the walls which show scenes from the show back when they used to film in there.

If there was one location in Death in Paradise that sold me on visiting Guadeloupe, it has to be the beach where the detective lives in a perfectly rustic beach hut right on the sand. This picture-perfect spot is found at Anse de la Perle beach, three miles north of Deshaies.

One thing I spotted too after watching the show again is how many times this beach is used for other scenes. There are a couple of islands off-shore – a fairly big one (called Kahouanne, which was used as a private island in an episode from the third series) and a tiny one. Once you know they’re there, you can spot them in the background in lots of beach scenes which supposedly take place in different locations around the island!

About a mile south of town, Deshaies Botanic Gardens are a colourful riot of tropical flowers, flamingos and parrots – and as you probably guessed there’s been a murder there too. And not just any old murder either – this is where the show’s first detective Richard Poole (played by Ben Miller) came to a sticky end with an ice pick in the first episode of series three.

Filming was done in a private villa inside the gardens, with its own swimming pool and amazing coastal views from the terrace. You can see the villa from the gardens but if you want to get any closer you’ll have to hire it out – it sleeps 10 and costs €2000 a week.

Saint Marie Zoo was new location for series eight, where a zookeeper was murdered with a tranquiliser gun. In real life it’s the Zoo de Guadeloupe au Parc des Mamelles, which is 30 minutes down the coast from Deshaies. The zoo is home to 85 different species from the Caribbean and Guyana, from big cats to tiny reptiles, spread across four acres of jungle.

One of the best parts of the zoo is its treetop walkway, which also featured in the show. A network of wobbly narrow wood and rope bridges runs 50 feet above the ground. You’re high up among the thick green tree canopy with great views down to the animal enclosures.

From the far end of Anse de la Perle beach, there’s a big white building in the next bay that looks a bit like a pile of sugar cubes. This is the Langley Fort Royal* hotel, where most of the cast and crew stay during filming, either in the main hotel or the cute pointed-roofed bungalows. But you don’t need to stay there to have a drink in the bar and a nose around.

In another bit of inspired recycling, the hotel, bar and beach in front have appeared in many different episodes – including one where a bride was shot with a speargun and fell from a hotel balcony in series one and as where TV presented drowned in series eight.

With Death in Paradise being so popular – especially in the UK, but it’s also shown in the US, Canada and Australia – I was surprised how little was made of it in Guadeloupe. We spotted a couple of other people taking photos of the police station in Deshaies, but most visitors to Guadeloupe are French and many of them have never heard of the show.

So there’s no real tourism around Death in Paradise and its filming locations in Guadeloupe – no big groups, no tour buses, no signs or tacky souvenirs – which makes it feel even more like you’re discovering the real-life Saint-Marie island, and living to tell the tale.

Looking for a hotel or AirBnB rental in Guadeloupe?* 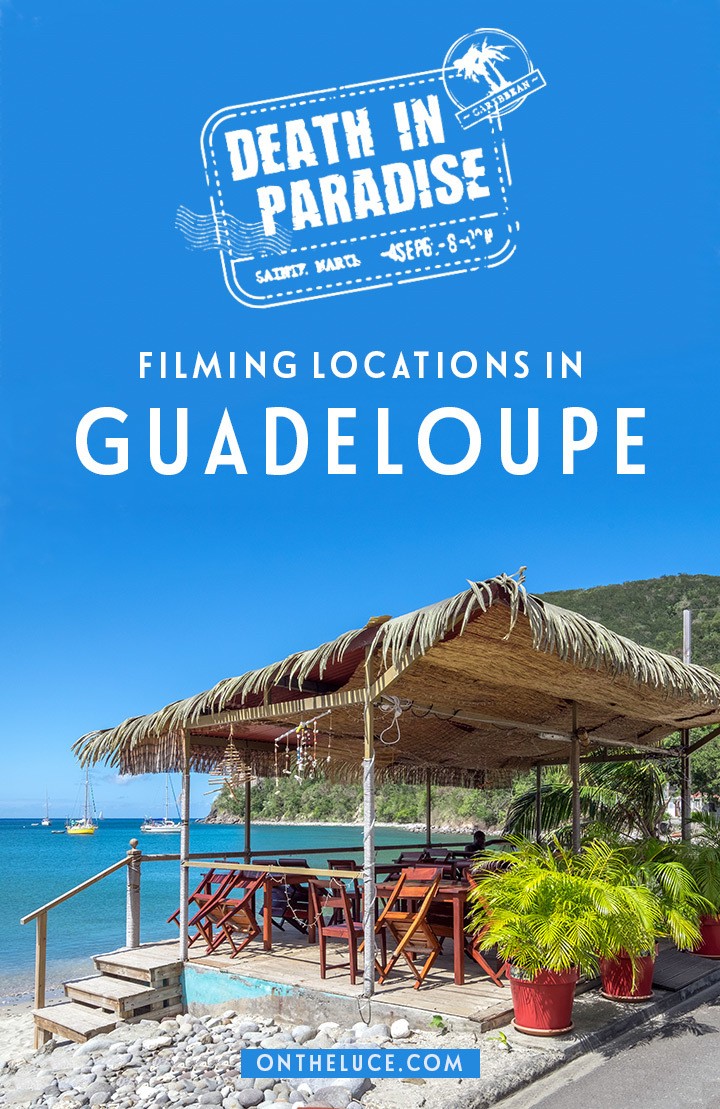 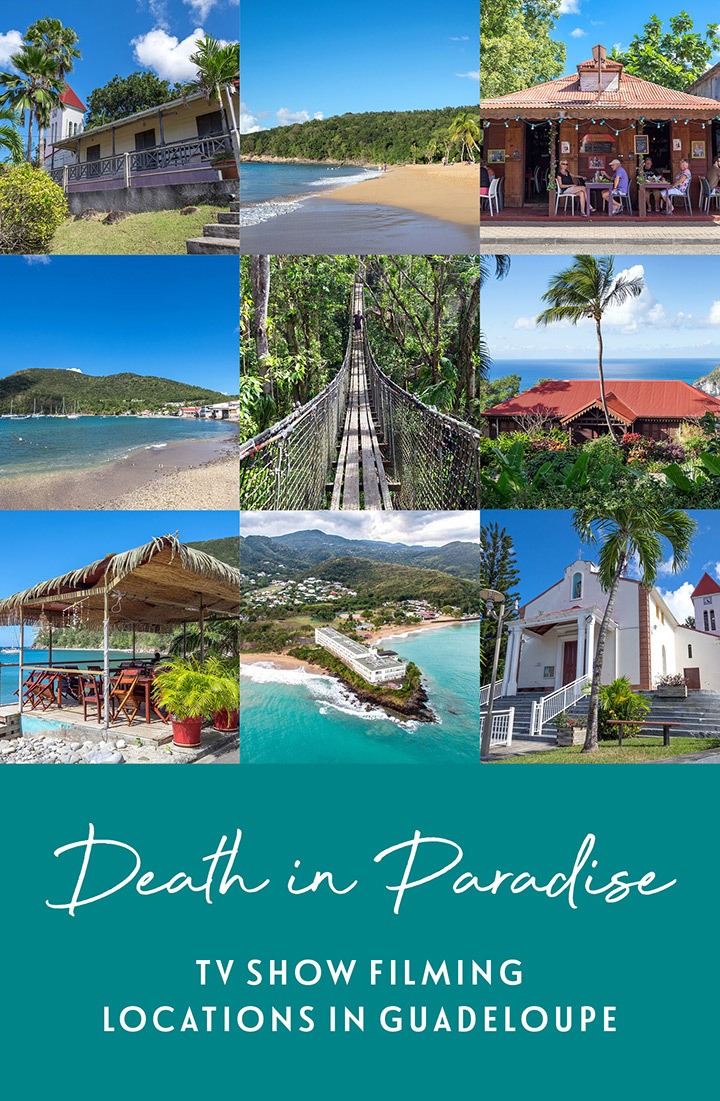