The island of Guadeloupe is a little piece of France in the Caribbean, with boules, beaches and beautiful views. But is Guadeloupe expensive to visit? This budget post breaks down the costs of a seven-night trip.

Escaping a cold grey winter for a week of Caribbean sun is the dream. But with peak prices in winter and a reputation for luxury, it’s unlikely to be a cheap holiday. You can bag a bargain winter sun package to the Dominican Republic or Jamaica. But what about more unusual islands? Like Guadeloupe, a French overseas department in the Caribbean.

Do you end up paying a premium if you’re looking for somewhere different, or does being a bit off the beaten track mean you avoid tourist prices? To show how expensive Guadeloupe is, here’s a budget breakdown for my 7-night trip to the island, with costs for accommodation, transport, activities and food to help you plan your own trip.

Note: these costs are based on my mid-range travel style – keeping costs down where I can to splash out on special experiences. This post was first published in 2018 but prices have been updated where possible to costs as of November 2022.

How much does accommodation in Guadeloupe cost?

With its array of luxurious hotels, the Caribbean isn’t exactly known for budget accommodation. So a place to stay is the biggest expense when visiting Guadeloupe. There are a few resort hotels on the south coast of Grande-Terre, but most of the accommodation in Guadeloupe is a mixture of guesthouses, villas and apartments.

We were travelling as a group of three so it worked out better value to rent self self-catering accommodation – which also meant we could cook some of our own meals. We split our time between two locations so we could see more of the island, with four nights in more developed Grande-Terre and three nights in quieter, more rugged Basse-Terre.

Our first stop was a two-bedroom apartment in Sainte-Anne in Basse-Terre. It had a large lounge and a little balcony overlooking the street, in a convenient location three minutes’ walk to the beach and the closest supermarket. The apartment cost €688/£602/$716 for three people for four nights in January (including AirBnB fees).

Our second stop was a super-cute cabin, in a peaceful location just outside the village of Saint Claude in the hills of Basse-Terre. It was small but perfectly formed – and beautifully decorated – with one bedroom downstairs and an open-plan loft with two more beds, and was surrounded by tropical gardens. Three nights cost €485/£425/$504.

How much is transport in Guadeloupe?

There is a limited bus service around the islands, but we wanted to do a lot of exploring so it was easier to hire a car. Car hire isn’t particularly cheap in Guadeloupe as supplies are limited. We got a few quotes from local car hire companies but ended up going with Europcar as their prices were reasonable and they had an office at the airport.

I haven’t included flight costs as they vary so much depending on where you’re coming from. From the UK, you usually have to go via Paris to reach Guadeloupe. Our cheapest route was to book separate flights from Birmingham to Paris (€143) and Paris to Point-à-Pitre (€400 with Air France – though we got a refund because of delays).

Prices have risen since the pandemic, but you can get flights from Paris to Guadeloupe with budget airlines Air Caraibes and Corsair from €600 return. Or from the US you can fly direct to Guadeloupe from New York with Jet Blue for $330, or from Miami with Air France for $500. There are also ferries from Martinique and Dominica.

What’s the price of activities in Guadeloupe?

The Caribbean is all about the sun, sea and sand – so you could easily get away without spending much on activities while you’re visiting Guadeloupe. Mostly we spent time on the beach, did a few road trips around the islands, took a free tour of a rum distillery, went walking in the hills in Basse-Terre and hunted out Death in Paradise locations.

We did pay an entry fee at a couple of places – the Deshaies Botanic Gardens and Guadeloupe Zoo cost around €16/£14/$17 each. And there was a €4.40/£4/$4.50 entry fee for the walking paths to the Chutes du Corbet waterfalls, so still not a lot.

What does food and drink cost in Guadeloupe?

After my trip to the Seychelles I was expecting island life to equal expensive food and drink, but Guadeloupe was nowhere near as bad. We had kitchens in both places we stayed so we could mix up eating out and self-catering. Supermarket prices (including wine) were similar to what you’d pay in France, plus there were markets selling local fruit and veg.

We usually ate out at lunchtimes and made breakfast and dinner – partly because our second cottage was down a tiny winding road so we tried to avoid driving at night. And in Saint-Anne most restaurants were strangely open for lunch and closed in the evenings.

I expected our DIY Caribbean trip to be pricier than a package, so I had a look at prices for the same dates next January. All-inclusive resorts in the Dominican Republic started from £1280 per person for a week including flights, so we managed to beat that – with a lot more flexibility. So it shows you can go independent in the Caribbean on a budget.

Lower budget? If you want to keep costs down, the car was a comparatively big expense so you could use local buses to get around instead. Cooking more meals for yourself or buying food from street stalls would also help save money. And as most accommodation is self-catering, then the more of you there are, the cheaper it works out.

Higher budget? Guadeloupe doesn’t have many luxury hotels, but there are some beautiful villas to rent, particularly the ones with infinity pools located in the hills above Deshaies on Basse-Terre. You could also charter a boat to explore the coast and nearby islands, or add activities like diving* the marine reserve off Pigeon Island.

Looking for somewhere to stay in Guadeloupe?* 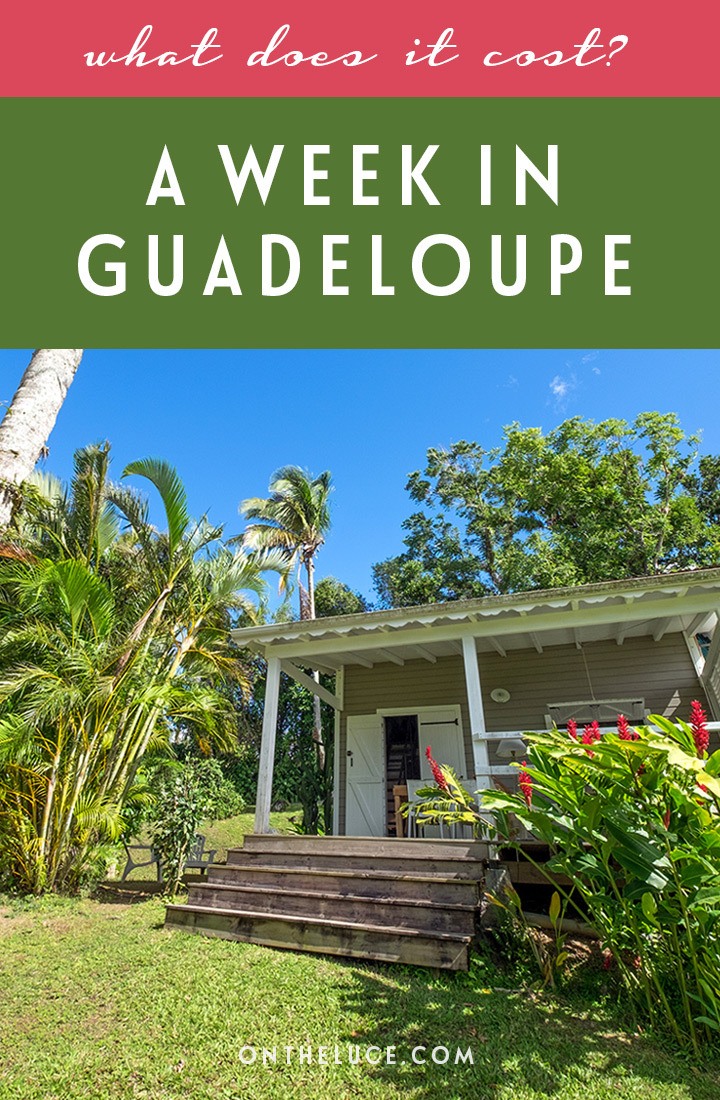 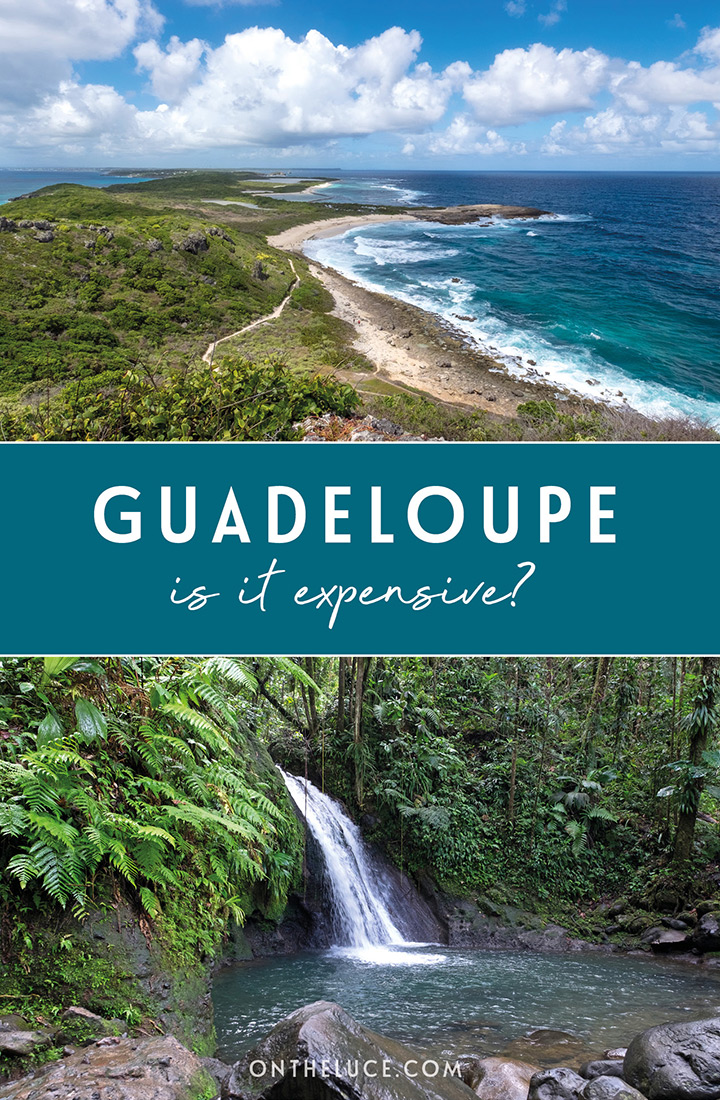 The best things to do in Guadeloupe in the French Caribbean

Death in Paradise locations in Guadeloupe in the Caribbean

Food in Saint Lucia: From market to plate

Hi Lucy! I visited Guadeloupe as a preteen and I really enjoyed the vibes and of course the cuisine! Now I want to go on a trip with my family and we are in our 40s. I am just a bit concerned about the fact that sometimes you just do not feel so energetic with tropical fruits or alcohol. Do you think there are good night activities for people who just have no use to go to a bar? Merci!

Hi Jeannie, Guadeloupe is quite a laid back place so you won't find a lot of nightlife around other than a few bars, but there are some nice restaurants, and some music nights where you don't need to drink to get on the dancefloor!

Wow, cool, thanks a lot! Was looking for something exactly like this. Good job Lucy! :)

Thank you – great to hear it was useful!

Love the look of that AirBnB - really cool. Lovely to have the freedom to do your own thing and not to be tied to hotel restaurant timings for breakfast or feel that you're missing out if you want to go out for the day!

It was so beautiful – proper interiors inspiration! And the surrounding definitely made it too.

I agree with the other comments, Lucy - you're a role-model for good organisation as well as your writing and photos! Honestly, I do try to note everything down when I travel, but there's usually one hurried day where I'll tell myself 'I'll do it tomorrow' and that's it, game over - I never quite get back on track!

Haha, I do love a good list or spreadsheet! Don't remember to do it with every trip but I do try to when it's places where I've been unsure about the prices when I did my planning and would've liked to read it myself!

Thank you so much for these! Travel inspiration goes a long way, yes, but these posts are one of the most valuable ones out there. It really REALLY helps. I appreciate all your research and meticulous recordkeeping. :)

Thank you so much – I try to write the posts I'd like to read in advance and always want to know the details, makes it so much easier to plan!