La Dolce Vita in the Italian Lakes: Things to do in Como, Italy 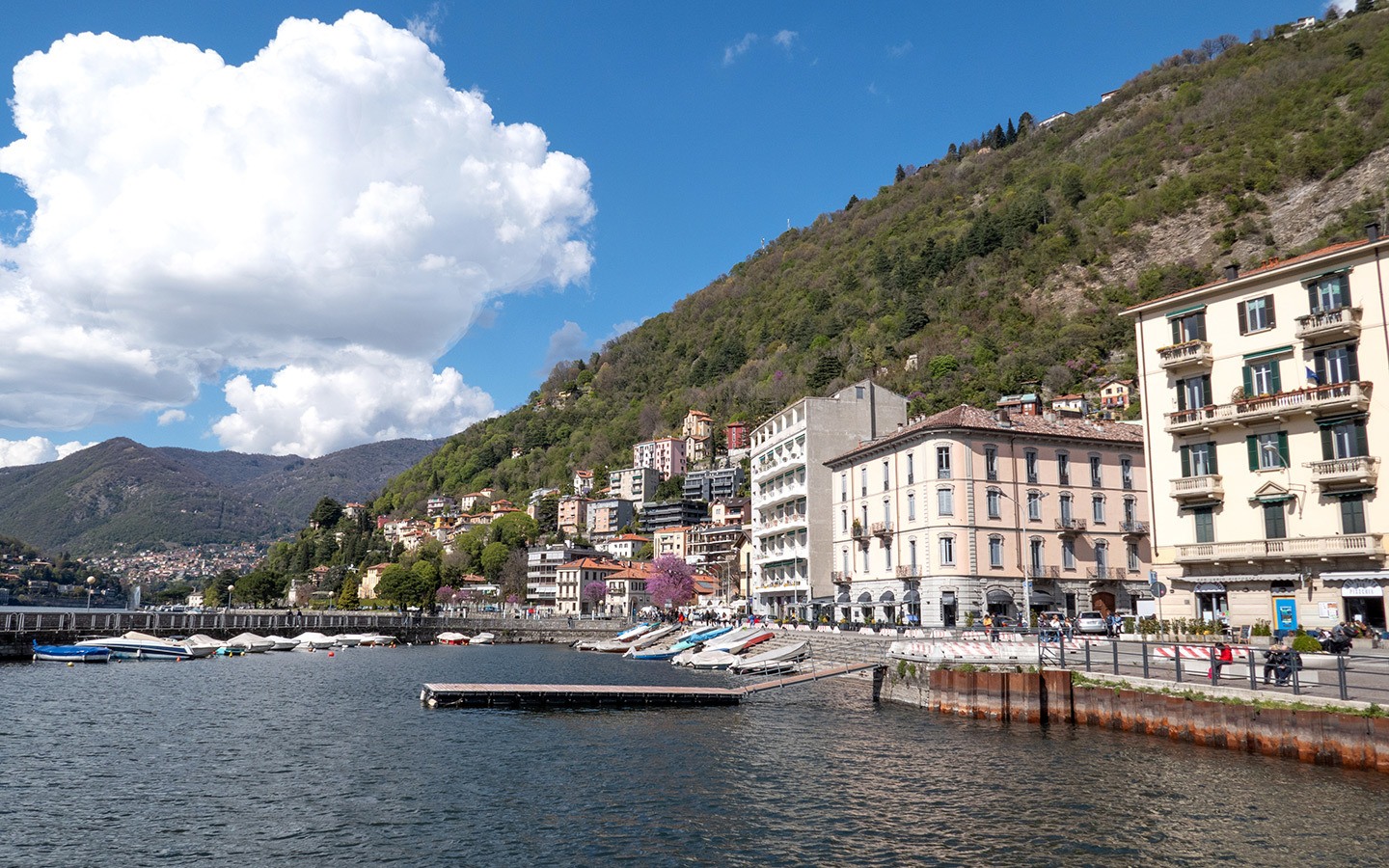 Lake Como epitomises La Dolce Vita – conjuring up images of 1950s film stars speeding across its sparkling waters on motorboats or zipping through narrow streets on a Vespa. This famous lake lies to the north of Milan, where Italy meets Switzerland. In the summer months it’s overrun by glamorous crowds of second-homeowners and day-trippers from Milan, but in spring and autumn it’s a lot more peaceful. The city of Como is often used as a stepping stone to luxury hotspots like Bellagio and Varenna, but it’s got plenty of charm of its own – as well as some not-so-A-list prices. So here are the best things to do in Como, Italy – on and off the water.

Things to do in Como, Italy 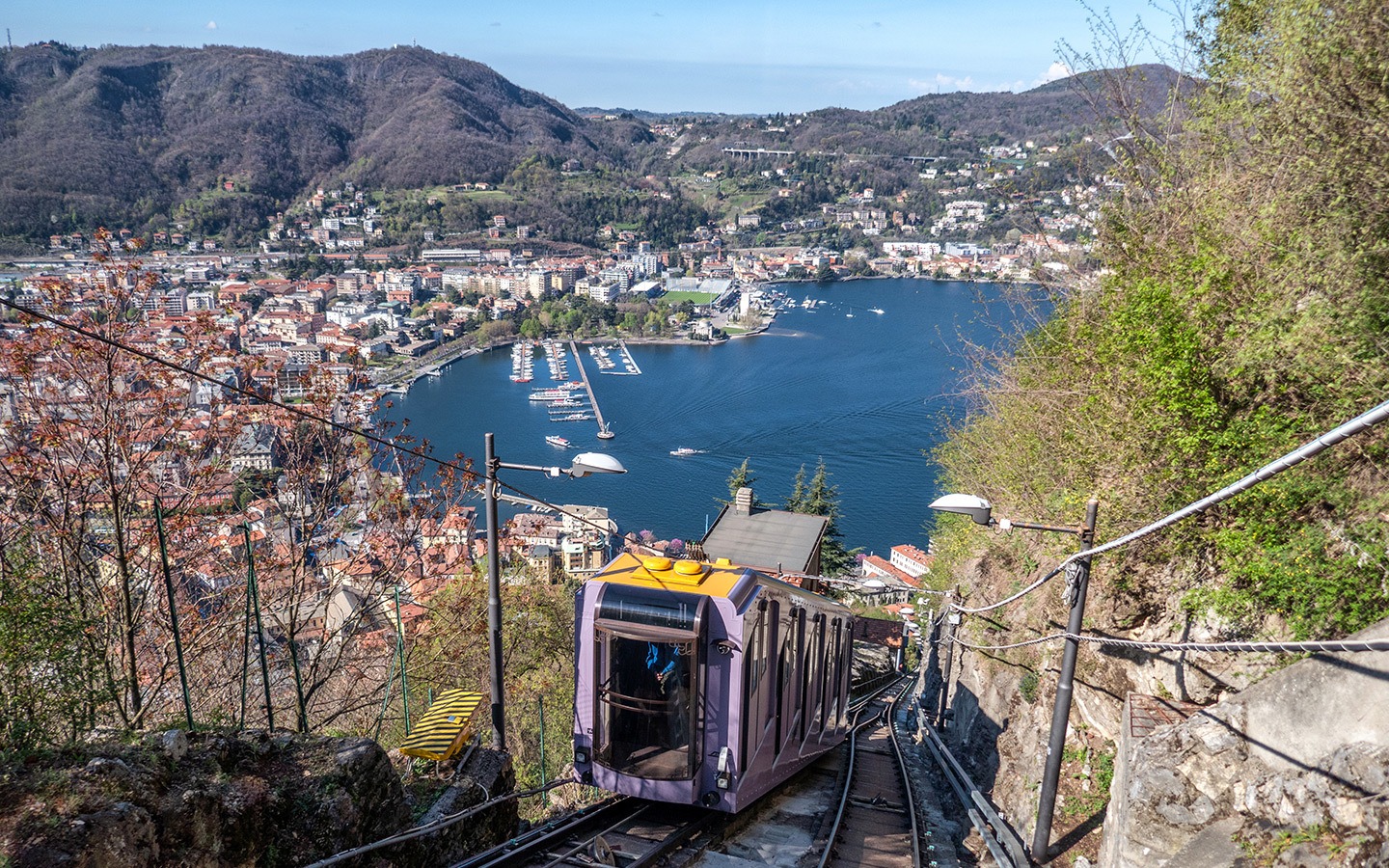 The funicular to Brunate from Como city

Take the funicular to Brunate

For the best view of Lake Como, head into the hills above Como city to the village of Brunate. The climb to the top starts from an unassuming wooden building alongside the lake in Piazza Alcide de Gasperi. Since 1894 a funicular railway has been carrying people between Como and Brunate. Trains run around every 30 minutes and cost €3 one way or €5.50 return, and the journey only takes seven minutes, with the two trains passing each other halfway.

The funicular’s gradient is as steep as you can get at 55°, with the red rooftops of Como and the blue of the lake spreading out in front of you as you rise up. If you can tear your eyes away from the lake, look out for muntjac deer among the trees next to the tracks. Brunate is a holiday resort for well-heeled Milanese who built smart Art Nouveau villas looking out over the lake. It’s nicknamed the ‘balcony of the Alps’ and on a clear day you can see why. 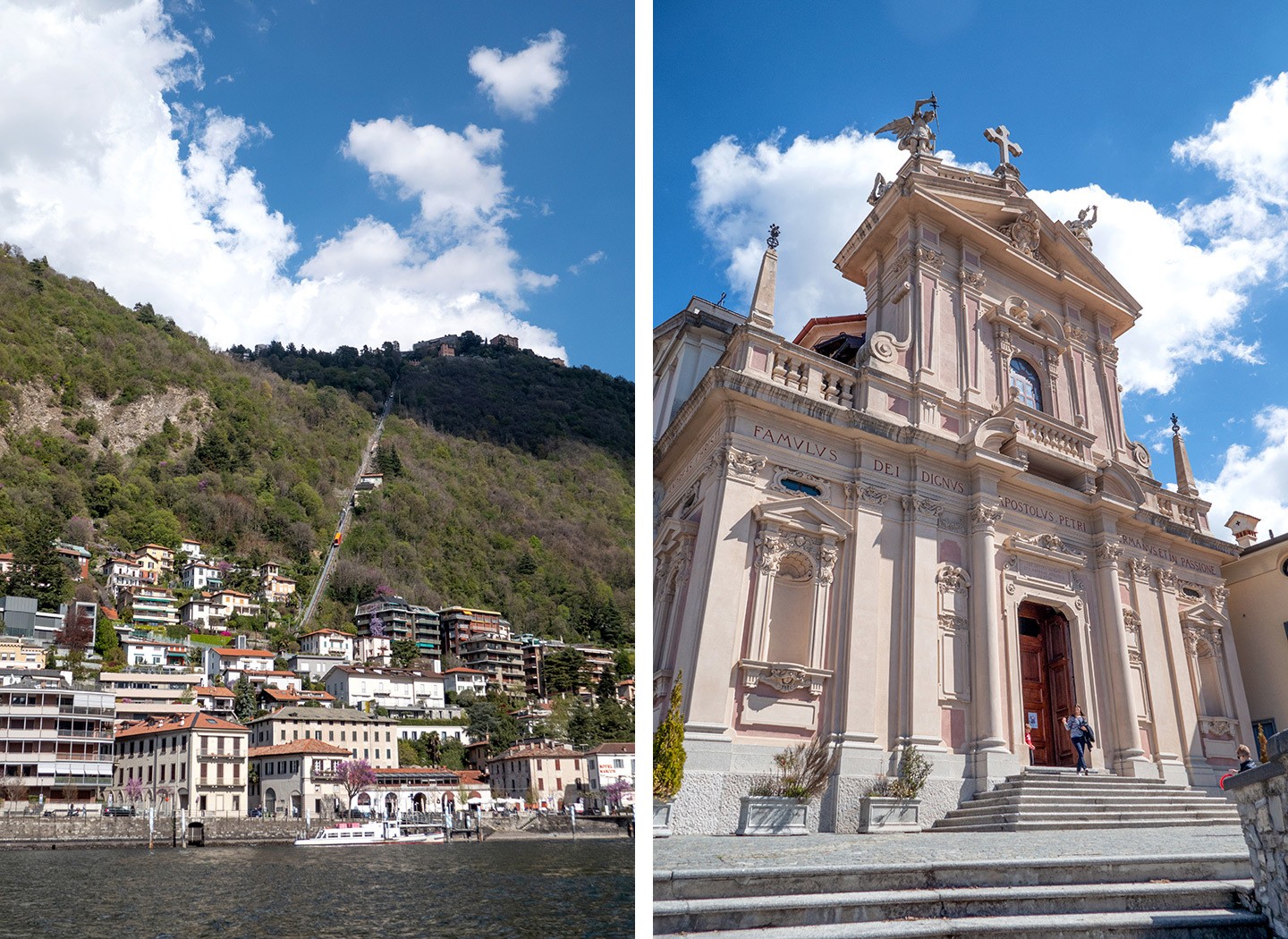 The funicular and one of Brunate’s churches

In winter it’s covered in a thick layer of snow, and most villas were still shuttered up in April, but there are churches to explore and a few cafés and restaurants where you can take in the panoramic views. There’s also a network of walking paths from Brunate, including a 6km mule path which takes you down to Torno on the lakeside. But we decided 700 metres wasn’t quite high enough, so we headed on up towards the Faro Voltiano – Volta’s Lighthouse.

The lighthouse is named after physicist Alessandro Volta who lived in Brunate for a while, and was built in 1927 to mark the centenary of his death. The route to the top took us about 30 minutes, running through the narrow streets of Brunate and on up a rocky path to the lighthouse. From the top you get a view over the lake from a different angle, looking down at the towns of Chiasso and Cernobbio, and over the border into neighbouring Switzerland. 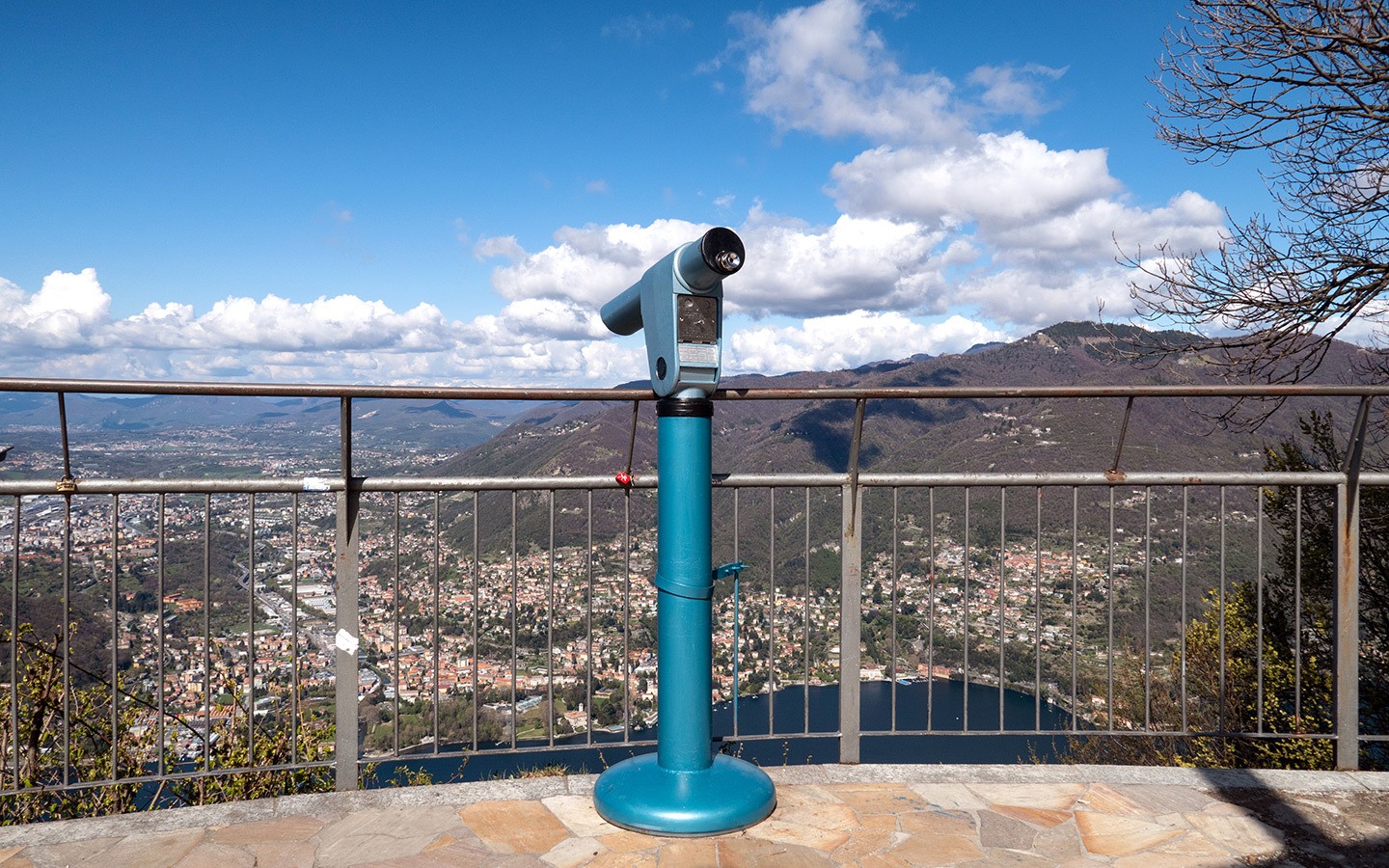 Looking out from the lighthouse

The lake is the hub of life in Como, with a constant streams of boats – from vintage cruisers to car ferries – as well as seaplanes coming in to land. Lake Como is Italy’s third largest lake, stretching 50km from one end to the other and shaped like a wishbone, with Como city at the bottom of the left fork. Along the lakefront there’s string of towns, villages, opulent palazzos and gardens – making a boat trip on the lake one of the best things to do in Como.

There are tons of different options for Lake Como boat trips. We took a one-hour circuit of the Basin of Como with Navigazione Laghi, which calls at Cernobbio, Moltrasio and Torno. Tickets cost €7.60 per person or €8.90 for a day ticket where you can hop on and off along the way. With the sun shining and the breeze fluttering the flag behind us, it was a relaxing way to soak up the views, with villages spilling down from the surrounding hills to the water’s edge. 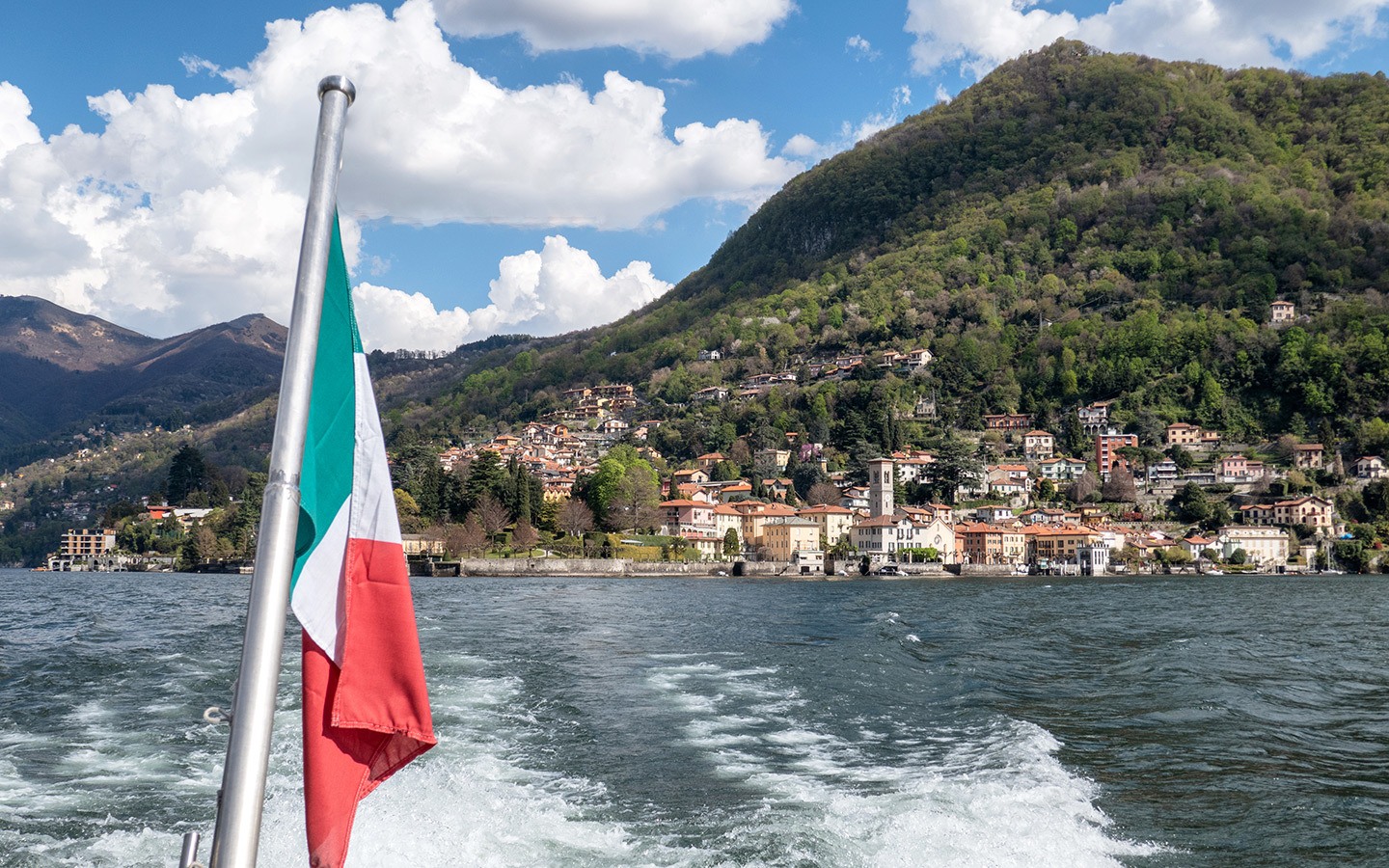 A boat trip on Lake Como

There are also longer day tours to the central part of the lake and the towns of Bellagio and Varenna, Villa Carlotta’s art museum and botanical gardens, and Piona’s Cistercian Abbey. Or ferries shuttle between towns from Como to Colico, with normal and faster hydrofoil services. Or if you want to channel Sophia Loren, you can hire a classic wooden Riva speedboat and captain for a spin around the lake – headscarf, giant sunglasses and prosecco a must.

A bit more affordable are the self-hire motorboats, which you can hire by the hour (with or without boating experience). Having your own boat means you can go wherever you like, and take a closer look at villas with famous owners or a film star past, including Villa del Balbianello which has featured in films like Casino Royale and Star Wars: Attack of the Clones. 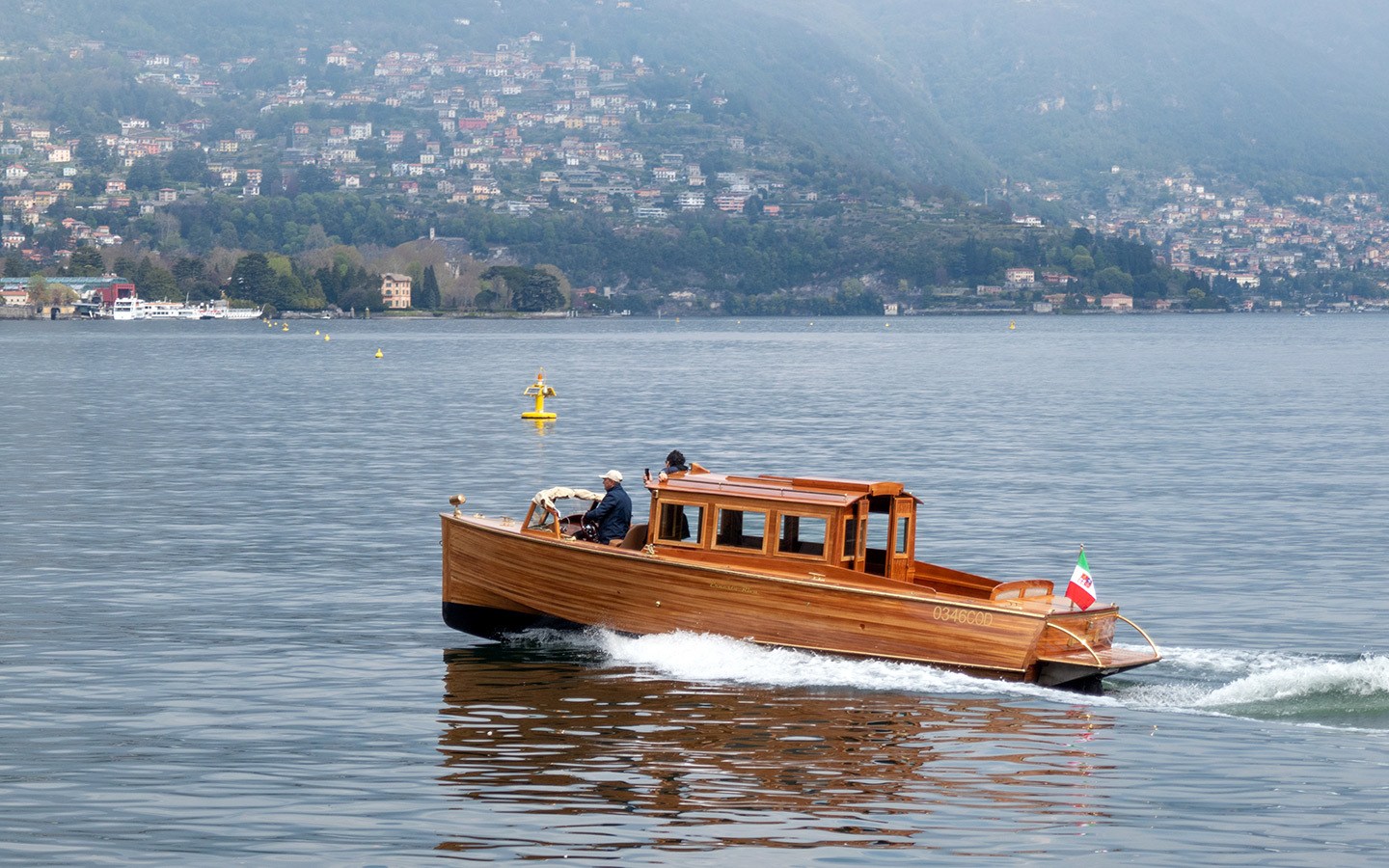 Seeing the lake in style

There’s more to Como than just the lake, and the historic heart of the centro storico stretches back from the waterfront. Most of it is pedestrianised so it’s easy to wander through its medieval squares, cobbled passages and churches. There are also some of the original city walls and gates still standing. Where a lot of Lake Como’s villages are straight from a postcard, Como city feels more like a ‘real’ place with locals shopping and downing espressos in its pavement cafés.

The giant dome of the cathedral, the Duomo di Como, dominates the town’s skyline. It took from 1396 to 1740 to build so mixes up different architectural styles. Head inside to take a look at its paintings and tapestries – and don’t forget to look up to where the ceiling is decorated with blue and gold. Como is also famous for its silk, and there’s a museum about silk-making called the Museo della Seta as well as shops where you can buy locally made fabrics. 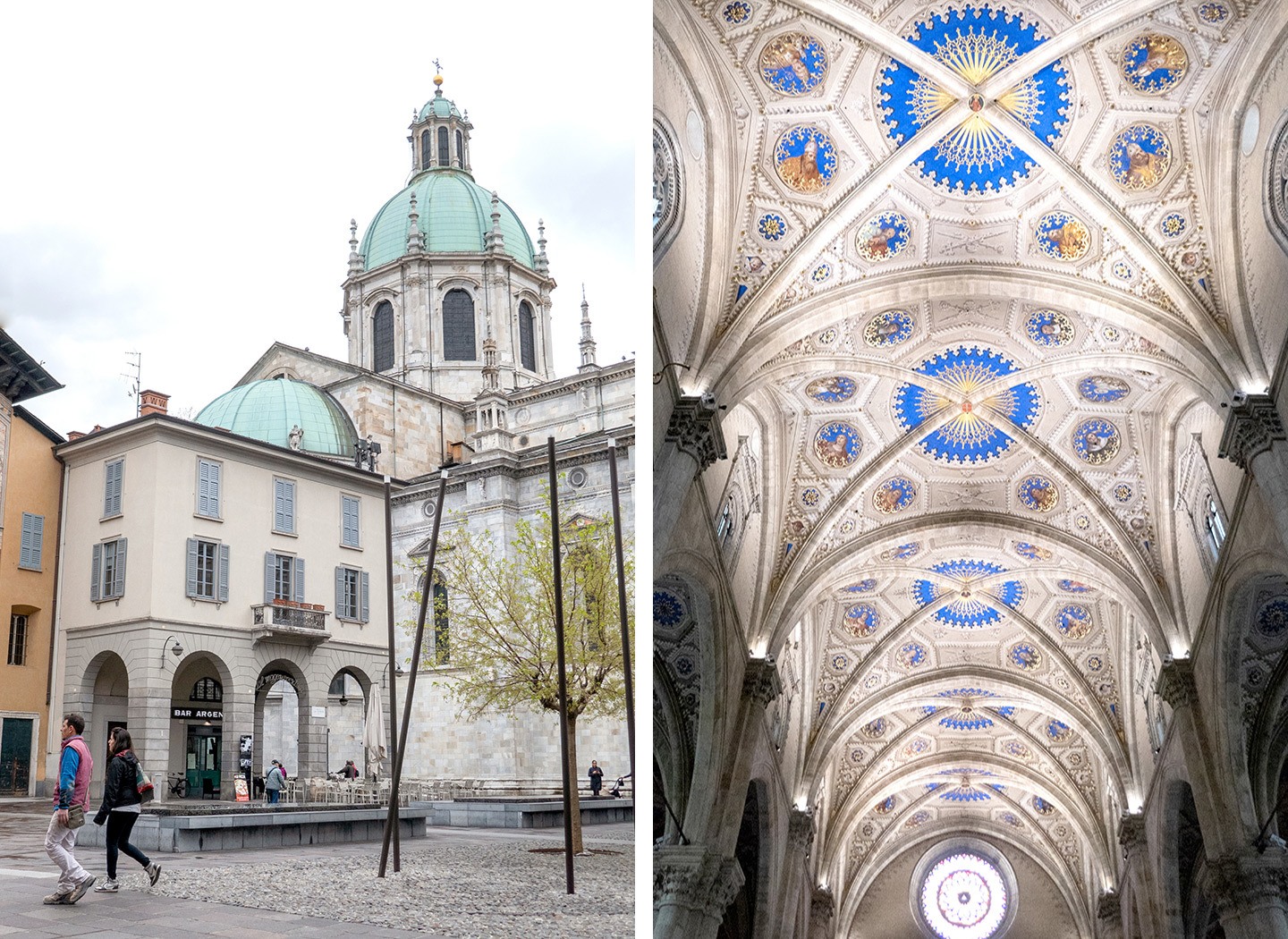 Join the locals for a promenade along the lakefront walkway – there’s a steady stream from pram-pushing mums in the morning to elderly gents putting the world to rights before their evening aperitif. Head west from Piazza Cavour past rows of boats to the Tempio Voltiano, a Greek-style temple that’s another memorial to Alessandro Volta. It houses a museum about his life and work, with the instruments he used to create the first electric battery.

Just before you reach the temple, a narrow pier juts out into the harbour with a new Volta-inspired sculpture called Life Electric at the end of it. It was designed by architect Daniel Libeskind to look like voltage flowing between two poles of a battery (or so they say) and is made from reflective steel. Back on the waterfront you can watch the seaplanes coming into land at the Como Aero Club before reaching the lavish yellow and white Villa Olmo. 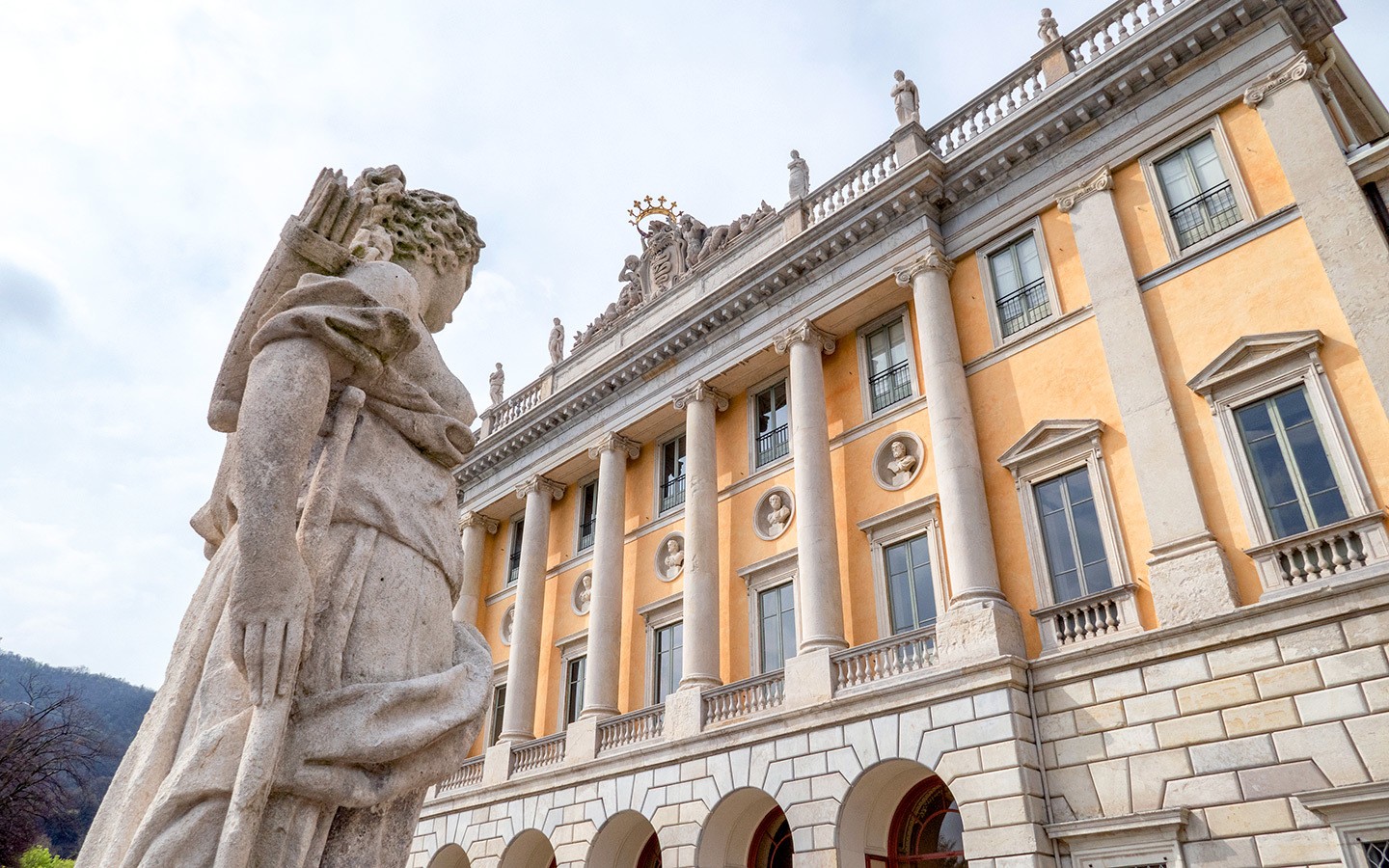 This neoclassical beauty was created by a Swiss architect at the end of the eighteenth century. Now it’s owned by the city and is used for exhibitions and events. But you can stroll through its gardens with their sculptures and fountains. From the villa it’s about a mile back to the centre of Como. Or if you want to to carry on walking it’s another 30 minutes on to Cernobbio, where you can catch the boat back to Como if you don’t fancy the return walk.

Or head east from Piazza Cavour along the quieter path towards the water jet of the Como fountain. In April the trees lining the path were draped with blossom but in the summer there’s a public beach with pool next to Villa Geno, a smart waterside wedding venue. It’s just under a mile, and if you fancy a drink with a view on the way back, you can pick up a bargain €4 takeaway Aperol Spritz from the funicular station and grab a bench by the lake. 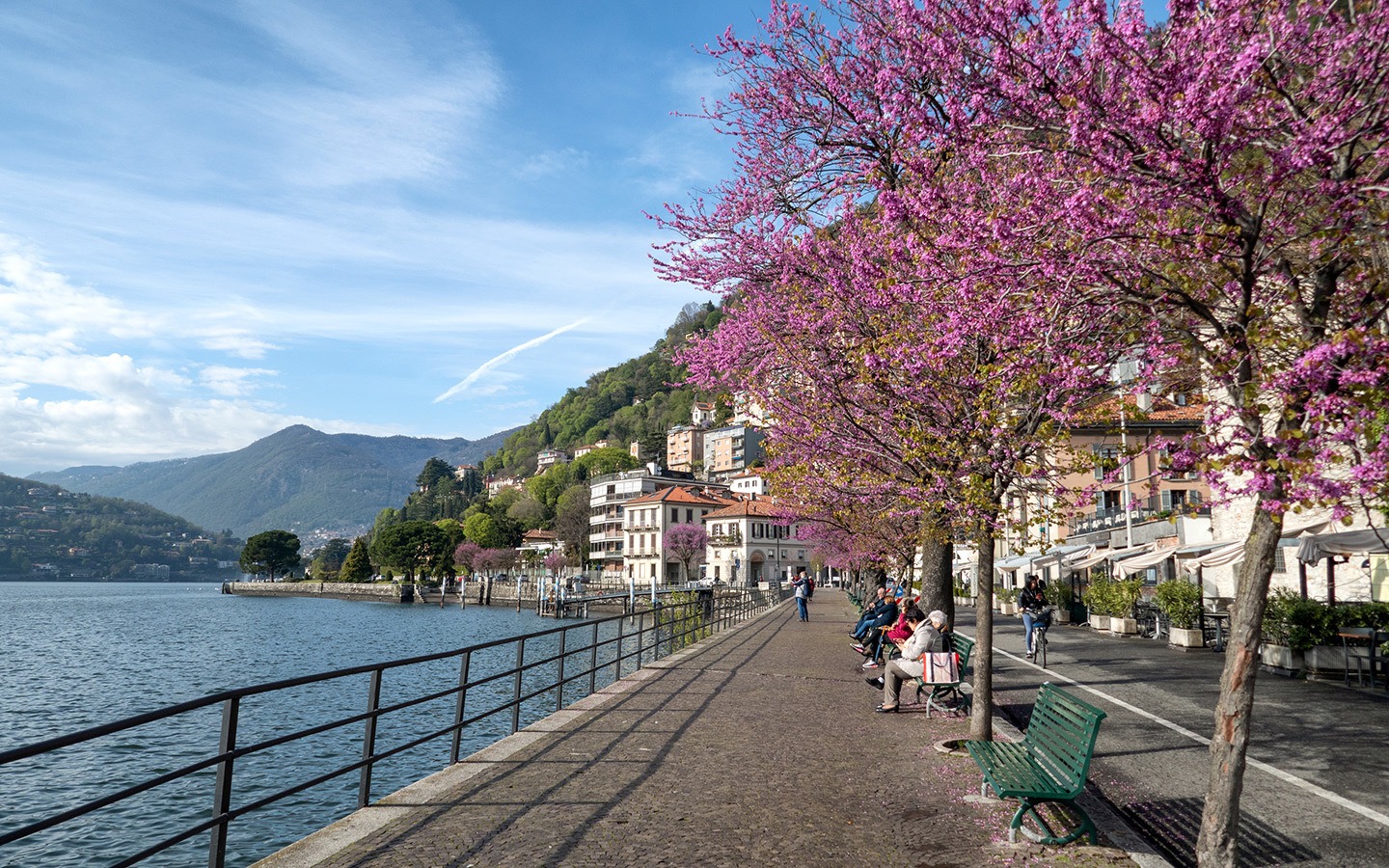 There are enough things to do in Como to fill a few days, but if you have more time there are some great day trips, including Milan which is under an hour away. We took the train from Como Lago station to Milan Cadorna. You can change onto the Metro to reach famous landmarks like the Duomo or the elegant Galleria Vittorio Emanuele II. Or just outside the station is Castello Sforzesco – a huge Renaissance citadel surrounded by parkland that’s home to a diverse group of museums, from musical instruments to archaeology – perfect for a rainy day.

The Swiss border is even closer, and you can catch the train to Lugano in just over half an hour. This lakeside city is part of Switzerland’s Italian-speaking Ticino region. There are more boat trips available on its lake, funicular railways to the top of Monte San Salvatore or Monte Brè, a beach and pool to cool off in on a sunny day, or you can visit nearby Bellinzona with its hilltop castles. Though beware the prices in Switzerland are a lot higher than in Italy. 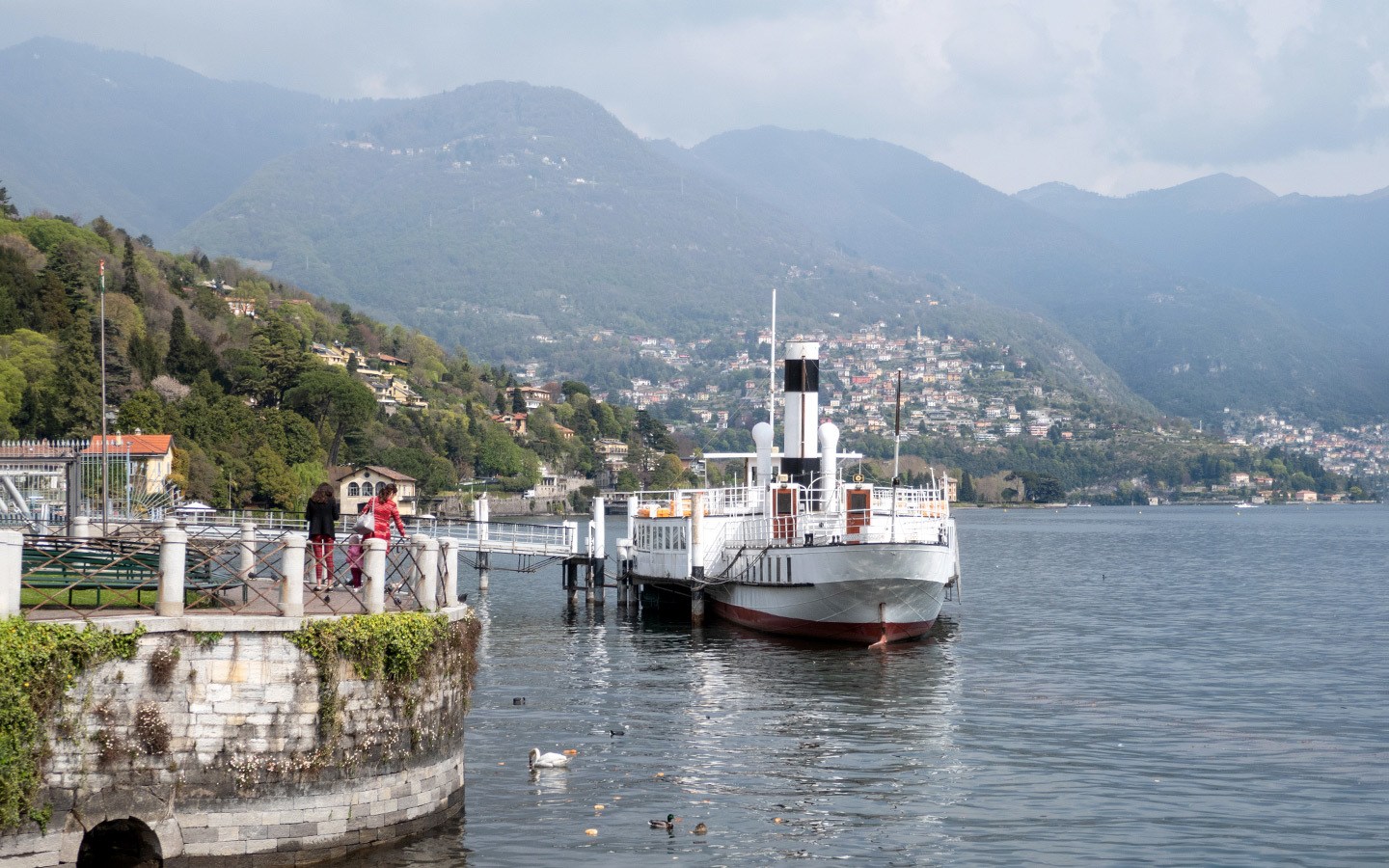 A boat on the lake

How to get to Como, Italy

The region’s roads can be crazy, especially at weekends, but Como’s easy to reach by train. From the main station Como San Giovanni it’s an hour to Milano Centrale, or head north into Switzerland (35 minutes to Lugano or just under 3 hours to Zurich). There’s also the smaller Como Lago station with trains to Milan Cadorna. The nearest airport to Como is Milan Malpensa, which has some direct trains to Como or you can change at Milano Porta Garibaldi.

Where to stay in Como

We rented a one-bedroom AirBnB apartment, a few minutes from the lake close to Como Lago train station. It’s a light and spacious place with a terrace for evening drinks. The apartment cost £104 a night for two people, including fees (and if you’re new to AirBnB you can save £25 with this link). Or splash out at the five-star luxury VISTA Palazzo Lago di Como, a converted 19th-century palazzo overlooking the lake with a guest-only rooftop bar and restaurant. 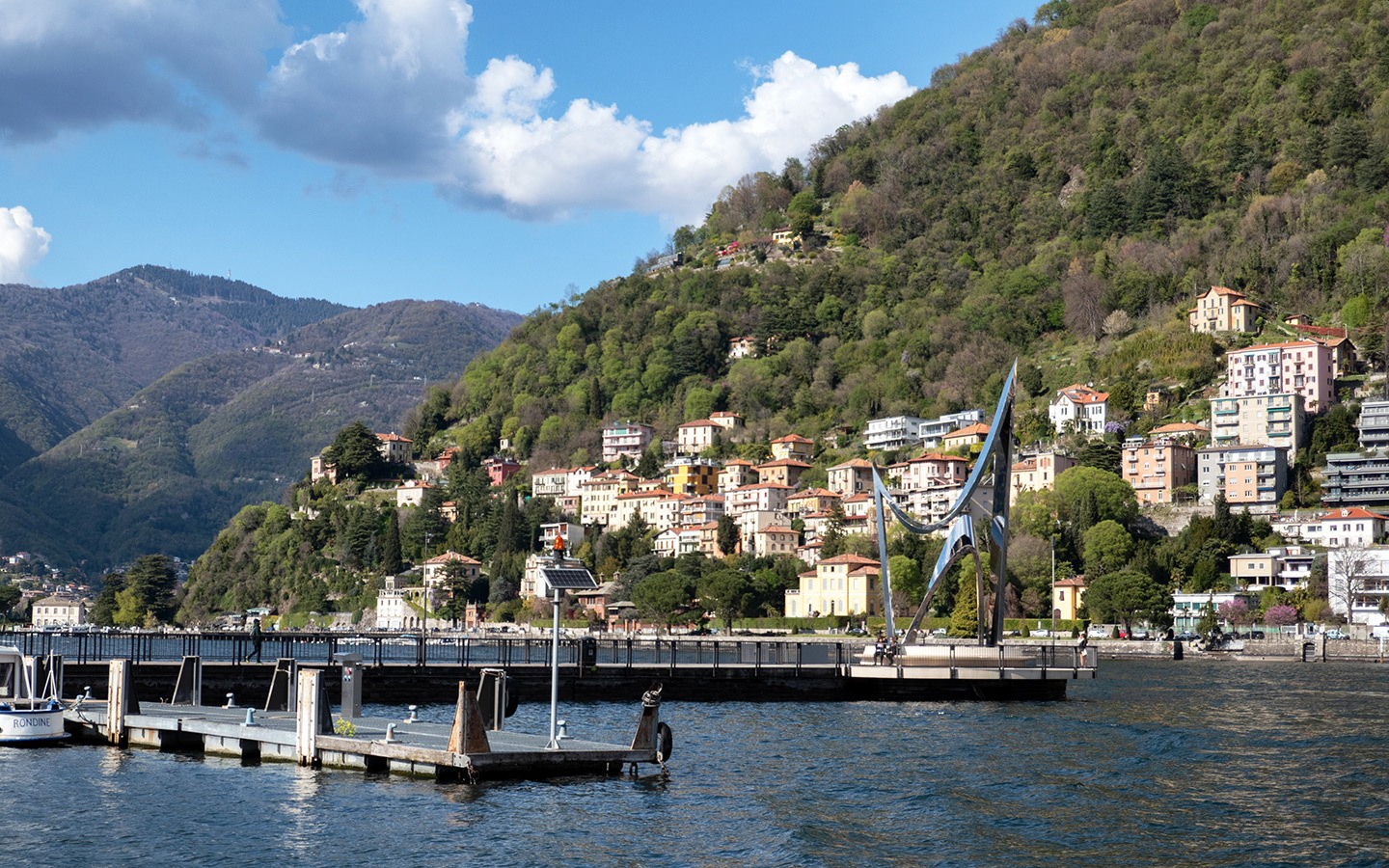 What to eat in Como

Each region of Italy has its own local specialities, and Como is no exception. There’s freshwater fish from the lake, like perch which is served with a creamy white risotto in the dish risotto con il pesce persico, and sun-dried lake shad (which are a bit like sardines). There are also polenta dishes, cassoela (pork stew) and cheese from the mountains. And leave room for ice cream from Gelateria Lariana, whose lakeside location always has a queue out of the door.

Looking for somewhere to stay in Como? 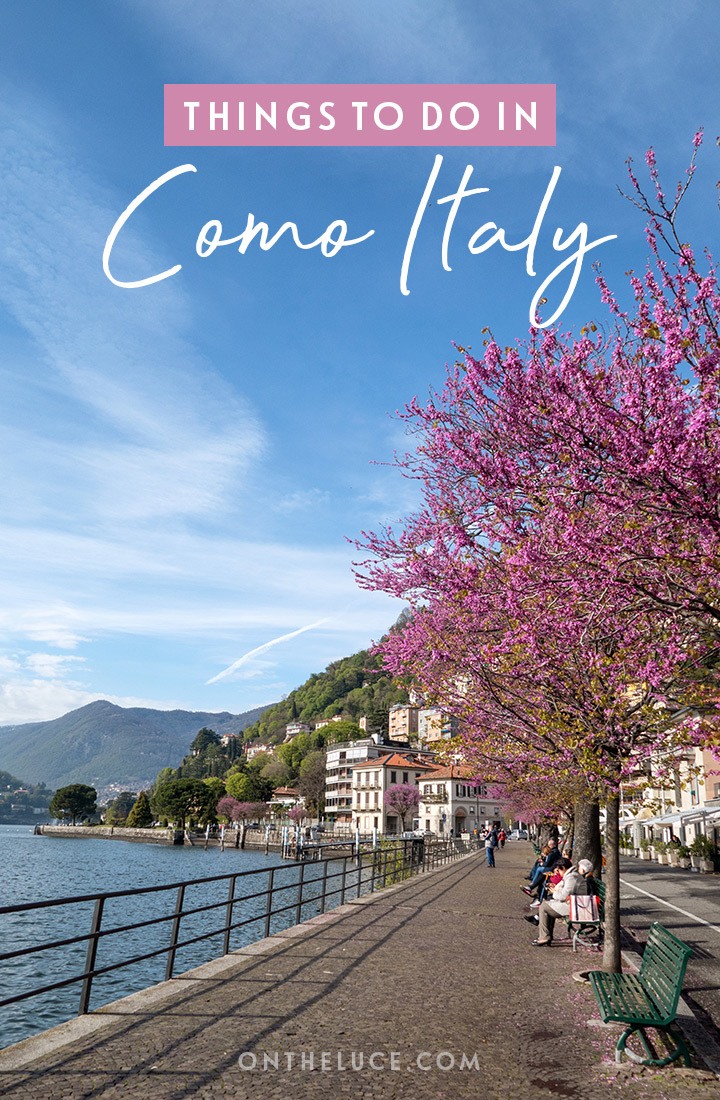 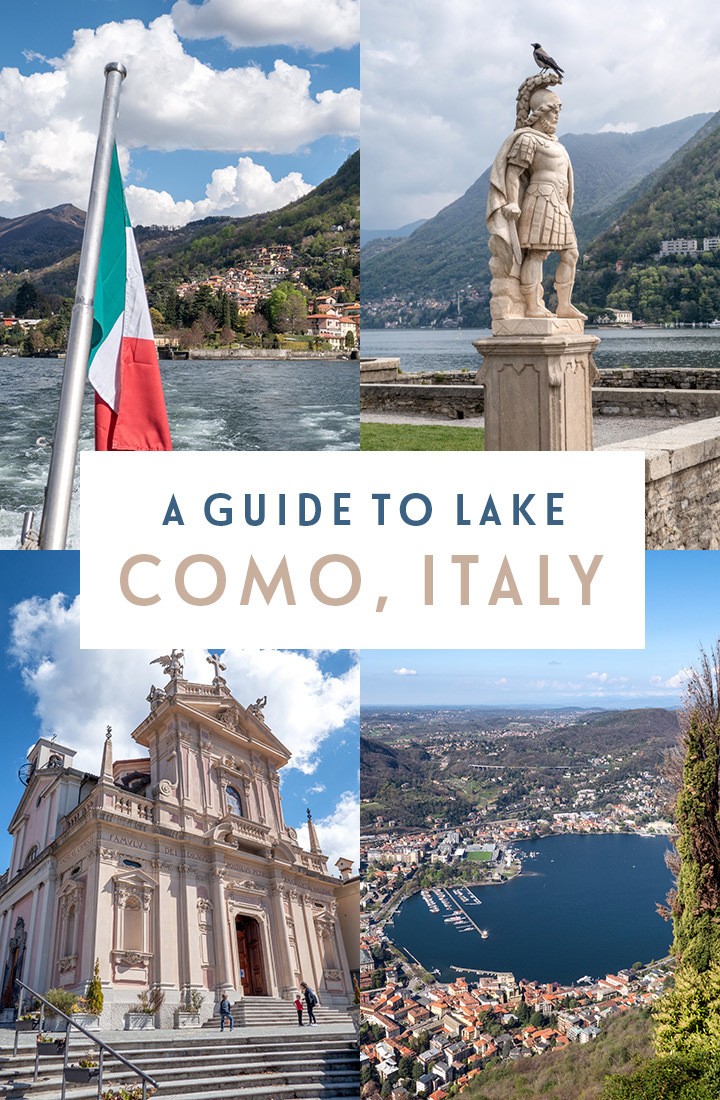