Could this be France’s prettiest town? A guide to visiting Colmar, Alsace, a fairytale town in northeast France with cobbled streets, colourful medieval buildings and boat trips through the canals.

I have a weakness for canalside cities – places like Annecy, Bruges, Amsterdam and Venice. But one of my all-time favourites is Strasbourg in France’s Alsace region, a city which is overflowing with half-timbered historic buildings and flower-lined canals. So when I heard there was a nearby town which was supposedly even more colourful, had prettier buildings, with more flowers and extra-scenic canals, how could I resist visiting Colmar?

Colmar was apparently the inspiration for the village in the Disney film Beauty and the Beast, and it’s not hard to see why. Walking through its streets is like seeing childhood fairy stories come to life. There’s a wooden turret which would be just perfect for Rapunzel to let her hair down from, tiny cottages that would make the ideal home for seven dwarfs and a candy-coloured bakery that Hansel and Gretel would love to get their teeth into.

In real life, Colmar is a small town which is located in the Alsace region of northeast France. The Alsace is where France meets Germany, and ownership of the region has been passed back and forth between the two countries over the years.

The result is a unique mix of their two cultures – think of it as France with a twist. Colmar was conquered by the French in 1673 but Germany claimed the whole Alsace region in 1871. It stayed German until after WWI when it was given back to the French, then was temporarily occupied by the Germans during the Second World War.

It was the last town in France to be liberated at the end of the Second World War and has been a part of French ever since. But its history means it’s no surprise that you can see a German influence in Colmar’s architecture, culture, food and drink.

Things to do in Colmar

Colmar doesn’t have huge list of must-see attractions, but what it does have is scenic spots by the bucketload. Pack an extra memory card or two – I can’t remember the last place where I took so many photos. Everywhere you look are colourfully painted waterside houses, wooden shutters, twisting cobbled streets and window boxes draped with blooms.

Colmar is the perfect place to wander around and see what you come across. The locals seem justifiably proud of their homes, and everything is neatly painted and maintained.

Some buildings are decorated with hanging lamps, clocks and hearts – then there are a few who’ve have taken it to the extreme by hanging bikes, chairs and who knows what else out front. In Colmar it seems your house is an artwork as well as a place to live.

In among the houses are a mix of cute boutique shops selling local produce like chocolate and wine, as well as art and antiques. Some shops have ornate wrought-iron signs hanging over the street to show what they sell. Then there are also plenty of waterside cafés and tucked-away cellar restaurants. And if you’re visiting Colmar at Christmas, the streets are draped with lights and filled with market stalls selling local food, drink and gifts.

The town does have a few museums to explore, including the Unterlinden Museum with its famous 16th-century Isenheim Alterpiece. There’s also a Toy Museum and the Bartholdi Museum, in the house where local artist Frederic-Auguste Bartholdi was born.

Bartholdi is most famous for creating the Statue of Liberty, and you can find a 12-metre-high replica of it on the road between Strasbourg and Colmar, a few miles out of town.

Also worth a visit is Gothic St Martin’s Church with its colourful tiled roof and 13th century stained glass. The Pfister House is one of Colmar’s most distinctive buildings with its wraparound wooden balcony and octagonal turret. And the Koïfhus was the town’s former customs house built at the meeting point between two major streets.

There’s barely an ugly building in the centre of Colmar, but things reach peak prettiness in the area near the Quai de Poissoniers which has been nicknamed Petit Venice. Colmar’s Little Venice is where you’ll find that picture-perfect row of half-timbered houses painted in pastel shades of pink, yellow and sky blue running alongside the canal.

Petit Venice was where Colmar’s merchants lived, who transported their goods around by boat along the River Lauch. The story goes that different colours were used to display different types of businesses – so if you were a fisherman your house was painted blue, or a butcher would have a red house. And they’ve been perfectly preserved since.

For a different view of Petit Venice you can take to the water on a boat trip. The canals are pretty shallow in parts (I saw a duck standing on the bottom at one point), so the tours use small, flat-bottomed boats which are similar to punts.

Boats leave from the bridge Saint Pierre, which is next to Restuarant Le Caveau Saint-Pierre. They take small groups on a 25-minute tour through Petit Venice and out to a leafy residential area, with trips costing €7 for adults or €4 for children aged 4–10.

Petit Venice isn’t exactly a secret though, so on a sunny afternoon you’ll be jostling for elbow room with hoards of river cruisers and day-trippers from Strasbourg and Paris to capture the perfect shot. Strasbourg is only 30 minutes away by train and has a similar feel to Colmar, along with a few extra big-city attractions, so the two are often combined.

A lot of visitors only spend a day visiting Colmar, but if you have time to spare it’s worth staying at least one night. The best reason to stay overnight is that in the early mornings or at dusk you can almost have Petit Venice to yourself. When it’s blue hour, with soft street lighting and perfect reflections in the still waters of the canals, the fairytale is real.

Colmar is also a great base to explore the Alsace wine region, which is famous for its white wines. As well as delicious Rieslings you’ll also find Gewurztraminer and Pinot Gris wines, Pinot Noir rosés and a local sparkling wine known as Crémant d’Alsace.

There are plenty of wine bars and shops in Colmar where you can try the area’s wines, but if you want to find out more you can also head out on the Alsace Wine Route. The full route covers over 170km and has hundreds of vineyards and wine producers you can visit.

But closest to Colmar is Eguisheim, which is only 7km away by bike and is renowned for its good looks as well as its wine. Or if you want to go further afield there are guided tours* available to the surrounding villages of Kaysersberg, Riquewihr and Hunawihr.

When to visit Colmar, Alsace

There’s not really a bad time for visiting Colmar. Summer is peak season, with average high temperatures of 24–26°C (75–79°F) but occasional thunderstorms. A host of festivals, including the Colmar International Festival and Alsace Wine Fair in July, mean the town gets very busy in summer. So expect crowds and book accommodation well in advance.

Winter is cold with average minimum temperatures just below freezing, but the Christmas markets mean late November and December are a popular time to visit. January and February are much quieter and you might get to see Petit Venice in the snow. Spring and autumn are pleasant with highs from 16–20°C (61–69°F), though can be rainy.

How to get to Colmar

Colmar is in northeast France, close to the German and Swiss borders. If you’re travelling by plane, there’s a small airport in Strasbourg with flights from mainly French airports and a few European and North African destinations. Or there are larger international airports in Basel (known as the Europort), 60km south of Colmar, in Paris or in Zürich.

Colmar is really easy to reach by train – it’s 30 minutes from Strasbourg, 45 minutes from Basel or 2 hours from Zürich. There are a few direct trains from Paris Gare de l’Est to Colmar and others with a change in Strasbourg, all taking around 2.5 hours.

Book your travel to Colmar*

Where to stay in Colmar

If you want to stay right in the heart of Petit Venice, the Hotel le Colombier* is a stylish four-star hotel overlooking the canals in three converted half-timbered townhouses from the 1540s. Rooms vary from standards to suites, and combine period features with contemporary furniture and modern artworks, and a peaceful courtyard garden.

Or we rented a two-bedroom apartment* in an old Alsatian house five minutes’ walk from the centre of Colmar. The building dates from the 17th century but has been given a bright, modern makeover, with a well-equipped kitchen and open-plan dining/living room.

Looking for somewhere to stay in Colmar, Alsace?*

What and where to eat in Colmar

Like the Alsace itself, Colmar’s local cuisine mixes French and German influences. Dishes not to miss include flammekueche (thin-crust pizza topped with bacon, onion and crème fraîche), baeckeoffe (meat and potato stew), choucroûte garnie (sauerkraut with pork and potatoes) and bretzels (tasty pretzel-shaped snacks which taste like doughnuts).

We mixed eating out and self-catering, picking up supplies of fruit and veg, bread and cheese at Colmar’s covered market. If you fancy splashing out, Colmar has 10 Michelin-starred restaurants, with two-star JY’s having the most impressive canalside location.

More low-key are La Soi with its delicious tarte flambée and the rustic Le Caveau Saint Pierre for traditional Alsatian dishes. And save room for Pâtisserie Gilg’s amazing cakes. 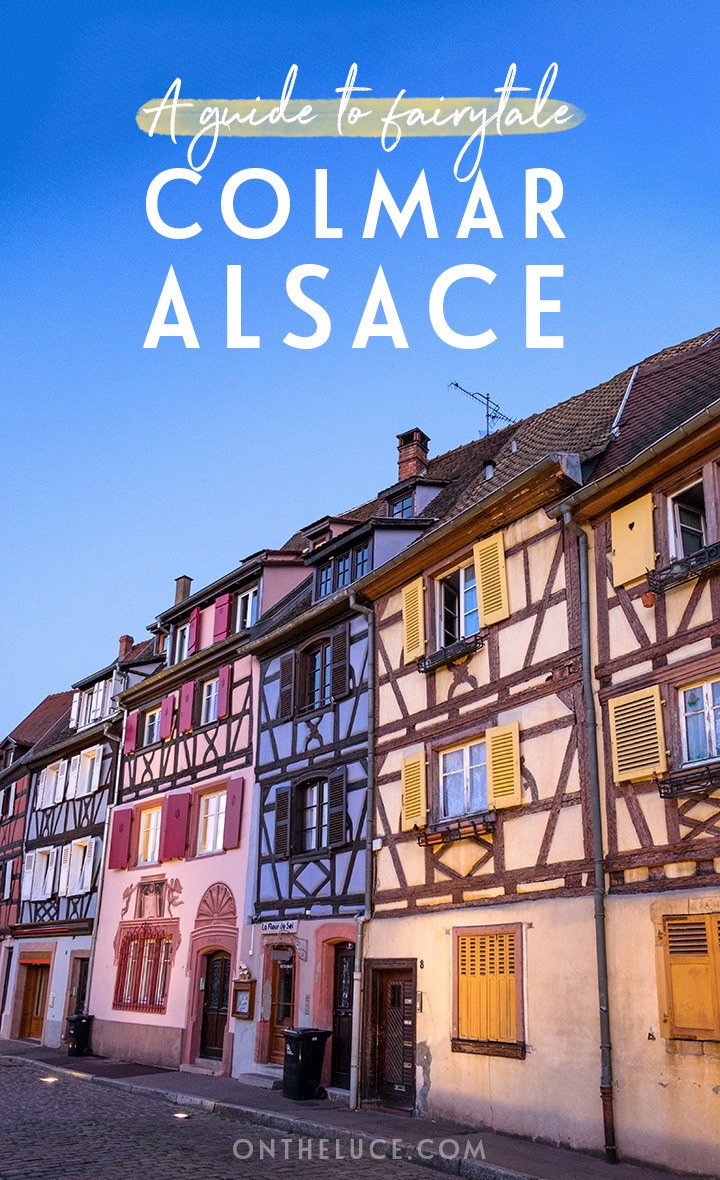 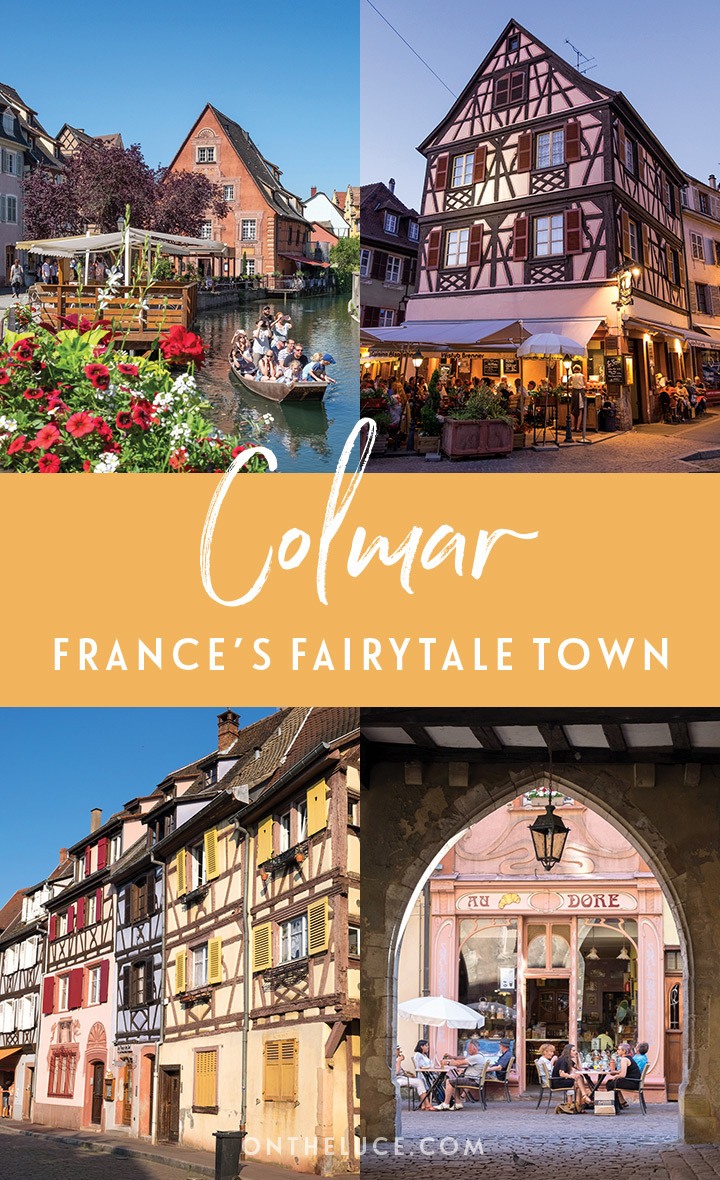 Canals and cathedrals: The best things to do in Strasbourg

We've been to Colmar a few delightful times over the years and are now considering a month long stay in fall of 2023. My husband has mobility issues due to asthma/COPD and I am wondering if there is access to electric carts or similar for when we want to go any sort of distance.

Hi Mary, I think there are mobility scooters available for hire but can't find any contact details, so it might be worth dropping a message to the local tourist board to check where you can get them: https://www.tourisme-colmar.com

We are planning on visiting Colmar the week before Easter. Will there be Easter markets and will Comar be decorated for Easter?

Hi Kathie, yes there is an Easter market (though it's smaller than the Christmas market) and decorations for three weeks around Easter – from 6–30 April in 2023, and you can find out more at https://www.printemps-colmar.com/en/

when is the best time for fall colors in Colmar and Strasbourg? I realize it will be approximate due to weather conditions. We have 2 choices for visit dates - around Sept 30 to October 3 or October 14 to 17.

Hi Steve, it's really dependent on the summer weather but generally I'd say that the best colours are into October so I'd go for the second date.

Is there a way to travel from Colmar to Requewihr, Keyserberg, Eguisheim wothout taking a tour package? Just taking a public transport.

This sounds lovely. Travelling with a motorhome we would want to be close enough to walk through the town. Any information would be helpful.