Wales’ Ffestiniog Railway: A journey back through time 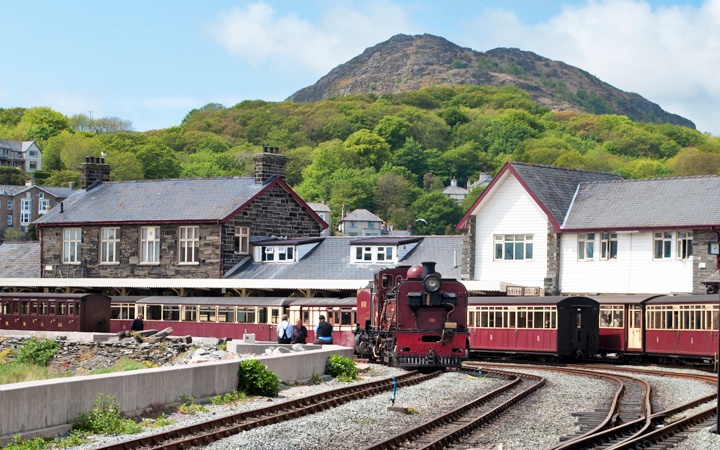 If you like a scenic train ride, then you’ll be in heaven in North Wales. The region has something like 14 different heritage railways – narrow-gauge, steam, miniature and trams – and that’s before you get to the mainline trains, which have stunning views of their own as they run along the coastline. So while I was in the area I had to indulge my train geek side with a trip on at least one. And if I could only choose one, then it had to be the Ffestiniog Railway, the oldest railway company in the world still running train services. Whose original steam engines take you on a 13.5-mile journey from Snowdonia’s mountains to the sea. 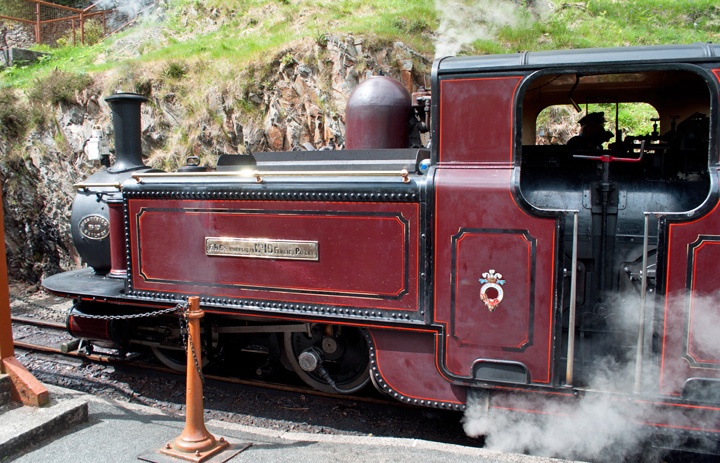 One of the steam engines

The Ffestiniog Railway was set up by an Act of Parliament in 1832 and built to carry Welsh slate from the hillside mining town of Blaenau Ffestiniog down to the coastal port of Porthmadog where it was loaded onto ships. The route was cleverly designed so it was all on a gradient and the trains could just run downhill using gravity. Though the downside was that pulling each one back up to the top took six hours and a whole team of horses. With increasing demand for slate, the horses couldn’t keep up, so in the 1860s special narrow-gauge steam engines were commissioned which could also carry passengers too. 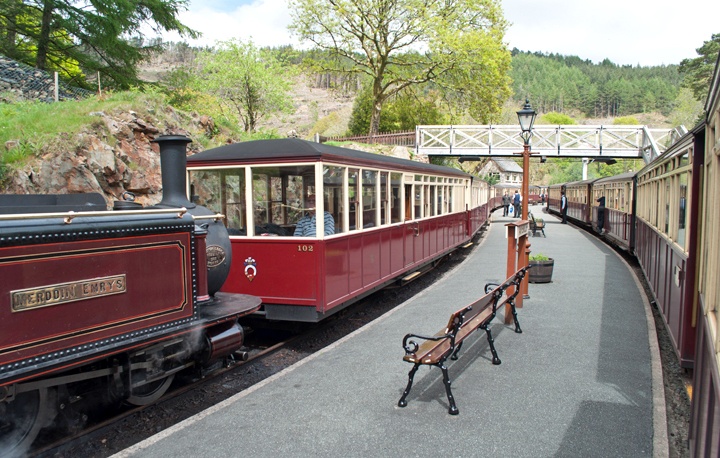 At their peak the trains carried a huge 80 wagons of slate each, but by the 1920s demand for slate had dropped. The railway experimented with running tourist services in the summer but it wasn’t enough to keep it going and by the end of the Second World War it closed down. But not for long. Because it had been created by an Act of Parliament, it would’ve taken another to get it dismantled, so instead it was just abandoned. A group of rail enthusiasts took it over and by 1955 they’d reopened the first stretch of track. 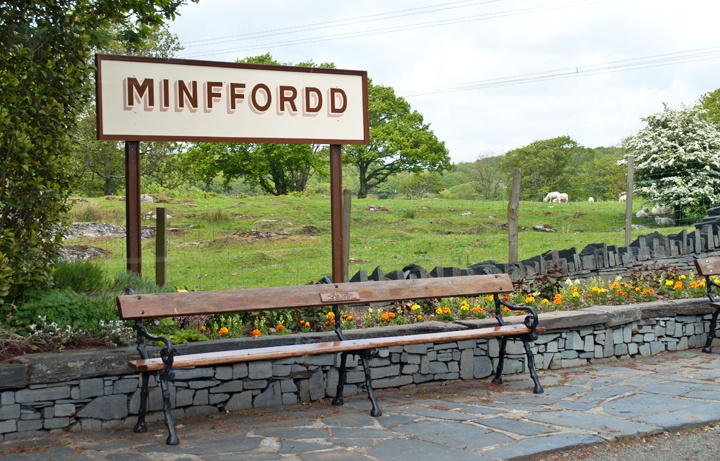 A station stop at Minffordd

There were a few obstacles though – the biggest being the Llyn Ystradau reservoir. It had been built to supply a new hydroelectric power station, right on top of a stretch of the old tracks. But that didn’t stop the Ffestiniog’s army of dedicated volunteers, they just built a diversion. And an impressive one it is too – the team of ‘Deviationists’ spent 13 years digging out a new 2.5-mile section of track, including a tunnel and a spiral track loop to help the train get down the hill. By 1982, the full route from Blaenau Ffestiniog to Porthmadog had been reopened and the railway is now one of Wales’ top tourist attractions. 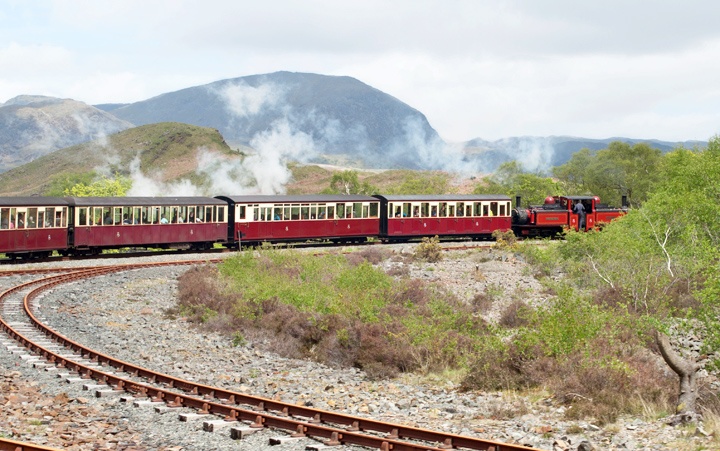 Turning in a circle as we travel around the spiral

As we boarded our train at Blaenau Ffestiniog station, it was like stepping back in time. The original carriages are still in use and have been restored to their Victorian glory. You can choose between third-class or first-class carriages (second-class disappeared sometime at the end of the 19th century), so we took the luxury option and headed for the observation carriage with its blue velvet armchairs and steward to keep you supplied with cups of tea (or G&Ts). On the way down to Porthmadog, first-class is right behind the engine, so we watched the drivers in action, stoking up the engines to envelop us in clouds of steam. 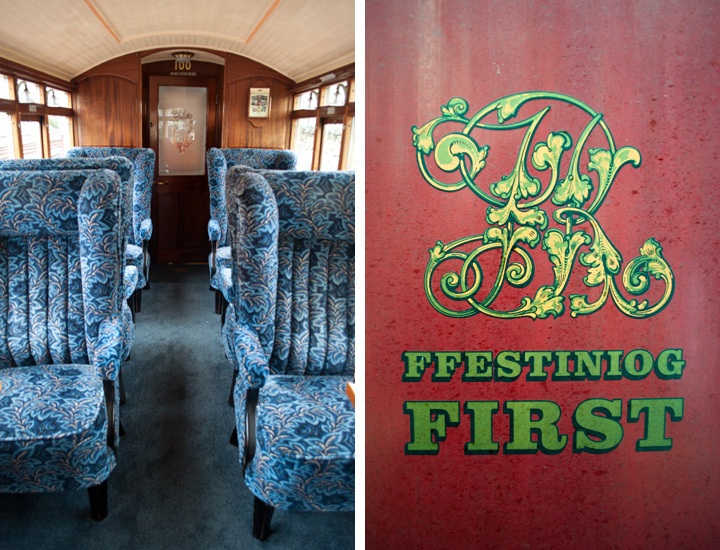 The route descends 700 feet on its way down to the coast. It starts off in Snowdonia National Park and run along the edge of the reservoir. As it wound downhill we passed waterfalls, oak woodland and fields of bluebells. The track cuts into the hillside so sometimes felt like we dangerously close to the edge, with a huge drop on one side. But that did mean great views across the Dwyryd Estuary and towards Harlech Castle. At Tan-y-Bwlch, the trains passed each other in opposite directions before carrying on down through little villages, with some houses so close they could touch the train from their doorstep. The final stretch took us into Porthmadog along the ‘Cob’ – a sea wall built in 1810 to reclaim marshland. 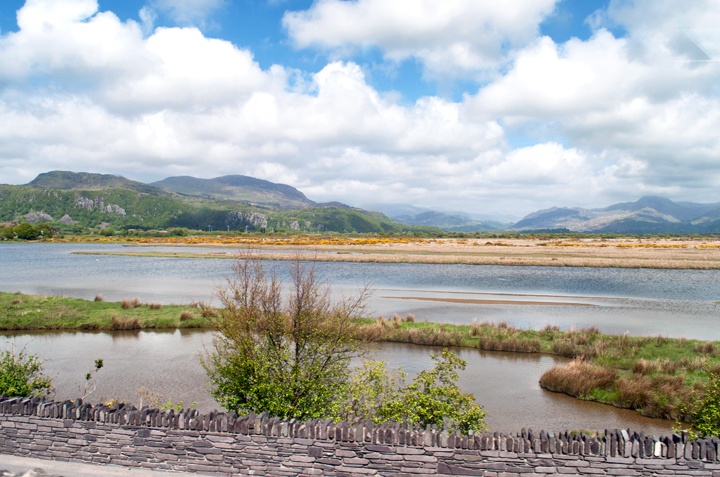 The railway is beautifully restored and really gives you a glimpse into the glamorous era of rail travel. A huge army of volunteers keep everything running smoothly, whether that’s manning the ticket desk or operating the signals. It’s a real labour of love and has a whole community of enthusiasts surrounding it. 2015 marked 150 years since it started carrying passengers, and a new, luxury Pullman observation carriage was built to celebrate. It went on a UK tour before it started work, ending up on display at London Paddington station – surrounded by 21st-century trains for a real old-meets-new railway experience. 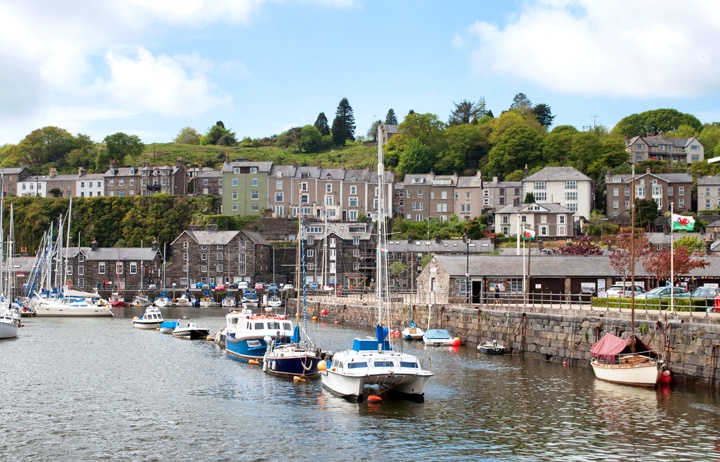 The harbour at Porthmadog

The Ffestiniog Railway takes 1 hour 15 mins to travel between Blaenau Ffestiniog and Porthmadog. Trains run two-eight times a day from April to November (see timetable). Day return tickets cost £24 for adults/£21.60 for seniors. The first child under 16 is free and others are half price. First-class tickets cost an extra £7 each way. You can book tickets for the full journey in standard class online and reserve first class tickets by phone. The company also runs the Welsh Highland Railway from Porthmadog to Caernarfon. 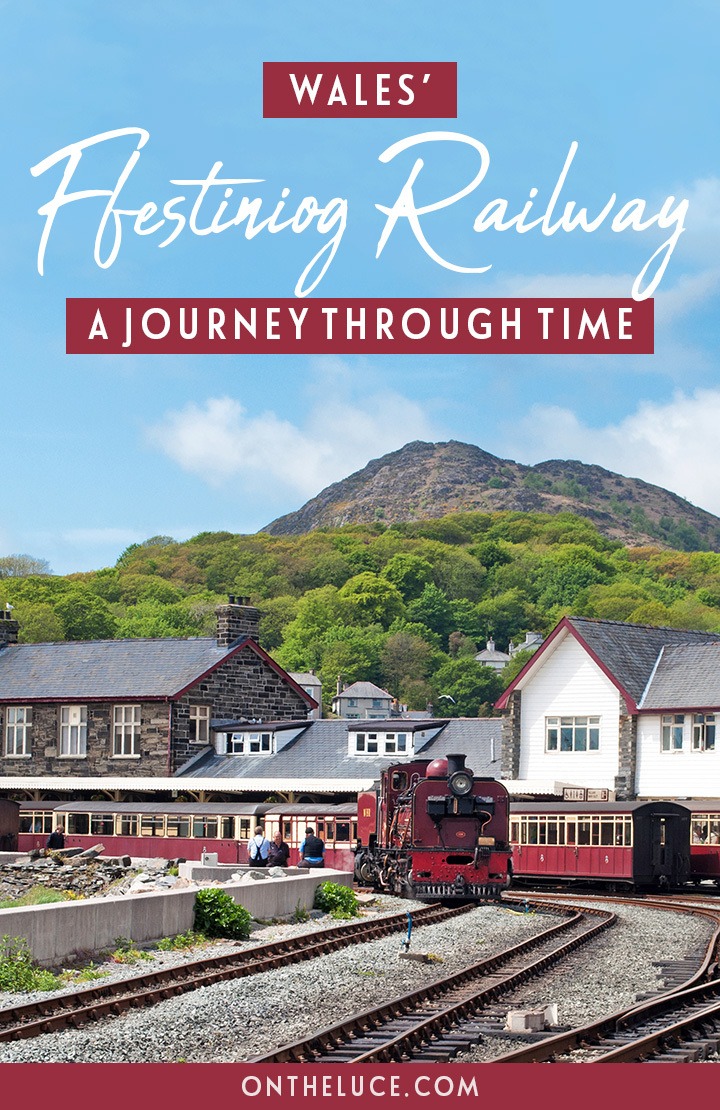