A guide to visiting the archaeological site of Akrotiri, Santorini – how to take a day trip to this fascinating ancient Minoan city, known as Greece’s version of Pompeii after being buried by an earthquake.

It might seem like the island of Santorini in Greece is wall-to-wall whitewashed villages, caldera views and sublime sunsets. But head south of famous Oia and Fira and you’ll find a different type of Greek settlement – the ruined city of Akrotiri, Santorini.

Or at least that’s what it’s known as now. It was christened Akrotiri after the nearby modern town of the same name, but its original name is just one of its mysteries. Nicknamed Santorini’s Pompeii, it’s similar in that both cities are important archaeological sites buried by a volcanic eruption, but there are a few big differences between them.

The history of Akrotiri, Santorini

The first difference between Pompeii and the Akrotiri archaeological site is their age. Pompeii was founded in 600 BC and destroyed when Mount Vesuvius erupted in 79 AD, but Akrotiri makes it look young. It was home to the ancient Minoans over 4000 years before Pompeii was founded, and has been preserved just as it would have been in 1500 BC.

Visiting Akrotiri is a window into the life of a distant people – and a different side of Santorini. Akrotiri started life as a simple fishing and farming village, growing olives and grains. But because it was positioned on the trade route between Europe and the Middle East, the money flowed in and it grew up into a big, prosperous port city.

Akrotiri was a democratic place though, with its own parliament and no palaces. People lived in two- and three-storey houses which had balconies, underfloor heating, hot and cold running water and some of the first indoor toilets.

The Minoan people decorated Akrotiri with elaborate painted frescoes, made their own wine and crafted furniture, pots and sculptures. Amazing when you think this was during the Bronze Age, when people in Britain were still living in huts and building stone circles. It’s even said that Akrotiri was Plato’s inspiration for the city of Atlantis.

But somewhere between 1620 and 1530 BC, it all went wrong for Akrotiri when the huge volcano Thera erupted and blew the centre right out of the island of Santorini. The eruption was one of the largest volcanic events ever recorded on Earth, creating a four-mile-wide caldera and sending up an ash cloud 20 miles high. It also set off a 100-metre-high tsunami that battered the coastline of Crete and reached as far as Egypt.

By the time the eruption had finished, Akrotiri had been buried beneath a 200-foot layer of ash and debris, and the shape of Santorini had been changed for good. Covered with hot lava and piles of ash, the island was abandoned for centuries.

Eventually Santorini was recolonised, with the Phoenicians, Dorians, Romans and Byzantines creating new settlements on the island. But the buried city of Akrotiri was forgotten about until the 1860s. Workers quarrying ash to build the Suez canal dug down and discovered artefacts from the old city. Some small-scale digs took place but the remains stayed where they were for another hundred years until excavations began in 1967.

Just a few hours into the excavation archaeologists discovered the first of Akrotiri’s historic buildings. Since then around 40 buildings have been identified but there’s a long way still to go. New finds are constantly being found and it’s estimated only a third of the city has been uncovered so far – and it could take another century to excavate it all.

Akrotiri archaeological site is open to visitors, set in a big, light and airy building. The ruins need to be covered up as the houses are made of mud bricks so would be damaged by water. But things were put on hold at the site in 2005 after the roof of the previous building collapsed and killed a British tourist, and it took seven years to repair and reopen the site.

There’s now a smart new building, made of steel and wood to let just enough light in but keep things cool and protected. Walkways are suspended above the ruins and take you around the edge of the city. But what’s ground level for us is roof height in Akrotiri.

The layer of ash covering the city was up to 40 metres thick in places so it has taken a lot of painstakingly digging and the removal of huge quantities of rock to get down to the original street level. A pathway leads down through some of the reconstructed houses, where you can see details like an original Minoan toilet and a stone bathtub.

During the excavations, remnants of people’s everyday lives were uncovered among the buildings, and they’re what makes the site so fascinating. The ash has perfectly preserved the Minoan way of life, from painted frescoes to hundreds of pots. These range from drinking cups up to giant storage vessels decorated with geometric patterns.

Many of the pots are amazingly still in tact, and some even had remains of olive oil or fish inside. You can see some artefacts at the site, but many others have been moved to the archaeological museum in Fira, and some of the best of Akrotiri’s frescoes are on display in Greece’s National Archaeological Museum in Athens.

Furniture like beds, chairs and tables have been recreated by pouring plaster into the casts made by the ash, like they did with people’s bodies in Pompeii. But the big difference at Akrotiri is that no human or animal remains were found here.

It’s thought there were probably many foreshocks before the big eruption so the Minoans had time to pack up their livestock and valuables and leave the city, unlike in Pompeii where it all happened so quickly. As it was a rich seafaring city, people had access to boats which made it easy for them to escape. Though where they went next and why they never came back to Santorini is another of the many mysteries surrounding Akrotiri.

How to get to Akrotiri

The ruins of Akrotiri make an easy Santorini day trip. They’re located in the south of the island, 20 minutes’ drive from Fira. If you don’t have a car there are regular buses from Fira bus station to Akrotiri, which take around 20 minutes and cost €2 one way.

Or if you want to make things easy you can also book a bus tour* from Fira to the ruins and the Red Beach. The Red Beach (Kokkini Paralia) with its dramatic cliffs is only a short walk from Akrotiri archaeological site and is well worth adding onto your visit.

Entrance to Akrotiri costs €12 adults/€6 concessions. You can also get a combined ticket for the Archaeological Museum, Museum of Prehistoric Thera and Collection of Icons and Ecclesiastical Artefacts at Pyrgos for €14/€7. Akrotiri is normally open 8am–6.30pm (closed Tuesdays) from mid-April to October and until 3.30pm the rest of the year.

A few information boards are dotted around the site which give you some basic information about what you’re looking at. But if you want to get more of an insight into Akrotiri it’s worth hiring a guide – you can pre-book an hour-long tour* with an archaeologist, or otherwise there are usually guides gathered at the entrance.

Looking for somewhere to stay in Santorini?* 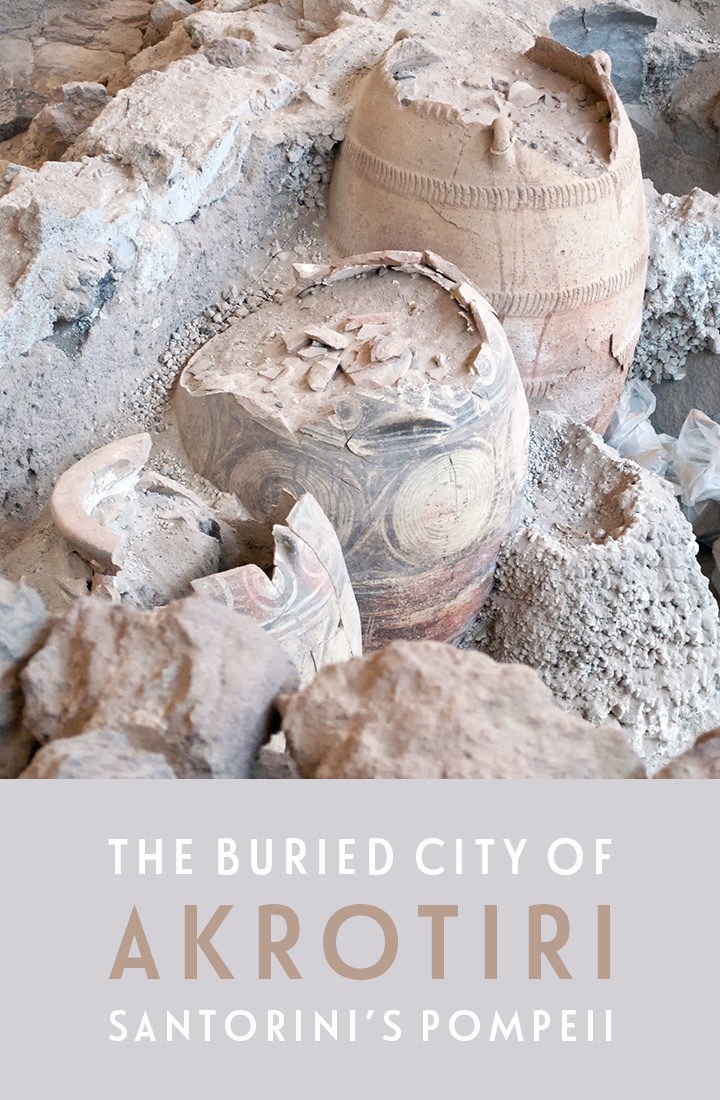 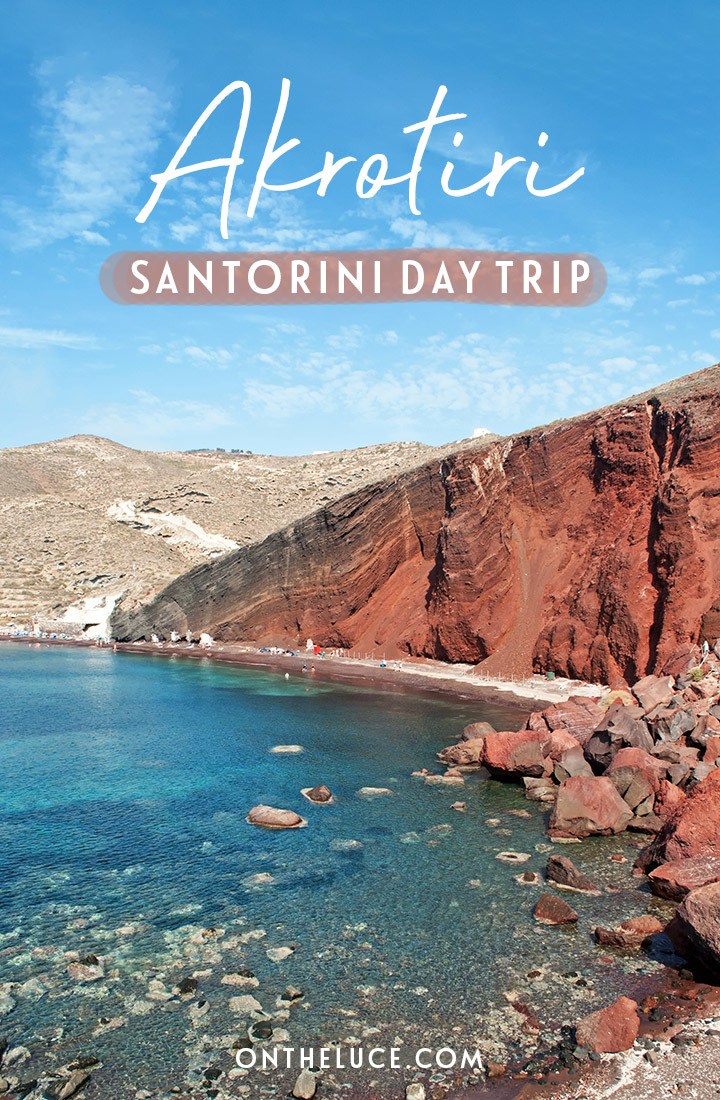 8 of the best day trips in Santorini, Greece

I VAGUELY RECALL VISITNG ACROTIRI WHEN THE IMPORTANCE OF THE DISCOVERY HAD BEEN REALISED. I SAW A FEW TENTS IN PLACE WHERE ARCHAEOLOGISTS WERE BEGINNING TO EXCAVATE. WHAT A REVELATION SINCE MY VISIT !. GREAT TO SEE PHOTOS OF THE EVER GROWING SITE

You can also use the Akrotiri Audio Guide that can be found online both for Android and IOS devices.

It’s always been a dream of mine to visit the ancient ruins of Rome and Greece, and especially Pompeii. Now there’s a new destination how exciting, one day I’ll be able to come a experience these historic sites

Such a fascinating place!

Will be visiting Santorini this April-May and will be adding a visit to Akritori to our stay. Thank you for sharing information about this ancient city.

You're welcome, have a wonderful trip!

Great timing. We are off to Santorini end Sept (our first overseas adventure for two years due to you know what ! ). This is on the ‘to do’ list.