Discover the history and mythology behind the world’s most famous sporting event by visiting Olympia, Greece, and exploring the ruins of the sacred site where the Olympic Games began.

From Olympia 776 BC to Tokyo 2020, the Olympic Games has been the most famous and prestigious sporting event in the world. But the Games actually started as a way to honour the gods, and their location in Olympia in the southern Peloponnese region of Greece was chosen because it was an important shrine to the Greek god Zeus.

For 1100 years the original Games brought people together, and their sporting, cultural and religious significance has been recognised by UNESCO, who’ve made the Archaeological Site of Olympia a World Heritage Site. So take a trip back in time to the original Olympic Games by visiting Olympia, Greece, and its archaeological site and museums.

The history of Ancient Olympia

The first Olympic Games were held in 776 BC, and every four years after that representatives from Greece’s city states gathered from across the country for sports events, ceremonies, exhibitions and even ritual sacrifices. The winning athletes were the superstars of their day and the closest a mortal could be to a god. Though if you wanted to take part you had to be freeborn, Greek and a man – and had to compete in the nude.

To let people know the Games were coming, priests were sent out across the county to spread the word. So they could travel in peace they carried two signs – an olive branch and a flaming lantern, which was lit with the sacred flame from the Temple of Zeus.

For three months around the Games an ‘Olympic Truce’ was declared and wars were stopped, so people could travel and worship safely. And a lot of the time disputes were settled peacefully when the opposing sides met up at the Games.

The original Olympic Games ran until 393 AD, when ruling Roman Emperor Theodosius I abolished them as part of his mission to get rid of Greece’s pagan rituals. Temples were ransacked and fires, earthquakes and floods finished off what was left of Olympia. By the time the site was rediscovered in the 18th century it was buried by up to eight metres worth of silt, and parts of Ancient Olympia are still being excavated today.

The modern Olympic Games started in Athens in 1896 and they’ve grown to be a huge global event. But there are still touches that take you back to the original Games – the Olympic flame that comes from Olympia’s Temple of Hera, the olive wreath motif that used to be the winner’s prize, and the focus on sportsmanship and fair play.

The Archaeological Site of Olympia covers almost 550 square kilometres with over 70 significant buildings. The ruins across the site have been heavily damaged so you have to use your imagination as you walk through piles of stone and crumbling pillars scattered amongst olive trees to see them as the temple or gymnasium they once were.

After starting as a religious sanctuary, the Olympic site grew into a whole self-contained town with accommodation blocks, bathhouses, aqueducts and administrative buildings. At the heart were the temples of Hera and Zeus. The Temple of Hera was built first in around 590 AD and the Olympic Torch is still lit from an altar in its ruins.

The later Temple of Zeus was built in the 5th century BC and housed one of the seven wonders of the ancient world – a 13-metre-high, gold and ivory statue of Zeus on his throne. It’s thought to have been destroyed in a fire and the temple itself later fell victim to an earthquake but some of its statues survive in Olympia’s museum.

The sporting focal point of Olympia was its stadium. The one you see today was built in the 5th century BC, but remains of older stadiums lie underneath, right back to the original. Athletes would enter the 192-metre-long space through an archway and compete in running events watched by up to 40,000 spectators – though only men were admitted. The finish line of the 120 metres running track is still there, where you can try a sprint finish.

Each Games had ten judges, selected by a lottery from a pool of wealthy men. They had a special paved area where they sat, though it’s not where you’d expect it to be – rather than on the finish line it’s in the middle of the stadium. Because in the original Olympics, it wasn’t about being the fastest or the strongest and coming first.

All athletes had to be in Olympia 30 days before the Games started. They trained, ate, slept and socialised together for all that time – and the judges were watching. As well as seeing how good they were at their sport, they were also judging their character.

The word athlete means “healthy mind, healthy body”, so how disciplined, fair and moral competitors were was just as important as their sporting prowess. Being an Olympic champion was a huge honour to the Greeks, with champions seen as as being chosen by Zeus in front of the nation. So the judges had to make sure they picked the right person.

Athletes found to be cheating were publicly shamed. They paid a fine which was used to build a statue of Zeus outside the stadium with their name, their father’s name and the village carved on the base. Practically the whole of Greece attended the Games and had to walk past these statues, so you’d shame your family and your village too.

The Archaeological Museum of Olympia is the oldest of Olympia’s museums and one of the most important museums in Greece. It houses the best-preserved artefacts from Ancient Olympia, including the carved pediments which decorated the ancient Temple of Zeus, sculptures, bronze figures, weapons and terracotta statues.

The Museum of the History of the Olympic Games in Antiquity takes you through the development of the Olympics and other Greek sports festivals. It includes some of the different myths and legends which explain how the Games began and there are also statues and paintings of some of the athletes who took part.

The Museum of the History of Excavations in Olympia is a small museum telling the story of the excavations of Olympia. You can see a model and illustrations of Olympia before excavations began as well as the historic 1875 excavation agreement between Greece and Germany, instruments and tools, maps and archive documents.

How to get to Olympia

Olympia is located in Greece’s Peloponnese region, around 300km west of Athens. By car it’s a 3.5 hour drive from Athens to Olympia. Or you can catch a KTEL bus from Athens’ Kifissos Bus Terminal to Pyrgos (5 hours) then a local bus to Olympia (30 minutes).

Because of the distance from Athens there aren’t many one-day tours to Olympia, but there are multi-day tours* which include other historic sites like Mycenae and Delphi.

Olympia is only 40km from Katakolon, a popular stop on cruise ship routes around the Mediterranean. Most cruise lines offer shore excursions to Olympia, but if you want to do it independently you can take a taxi (€43 each way), a shuttle bus from outside the port (40 minutes, €12 return) or there’s also a train service (45 minutes, €10 return).

Visiting the archaeological site of Olympia

There are some basic information panels around the site, but if you want to get more of an insight when visiting Olympia it’s worth hiring a guide. You can pre-book a private guided tour* with an archaeologist or there’s self-guided virtual reality walking tour* which helps you navigate around the site and shows what it would have looked like.

Looking for somewhere to stay near Olympia?* 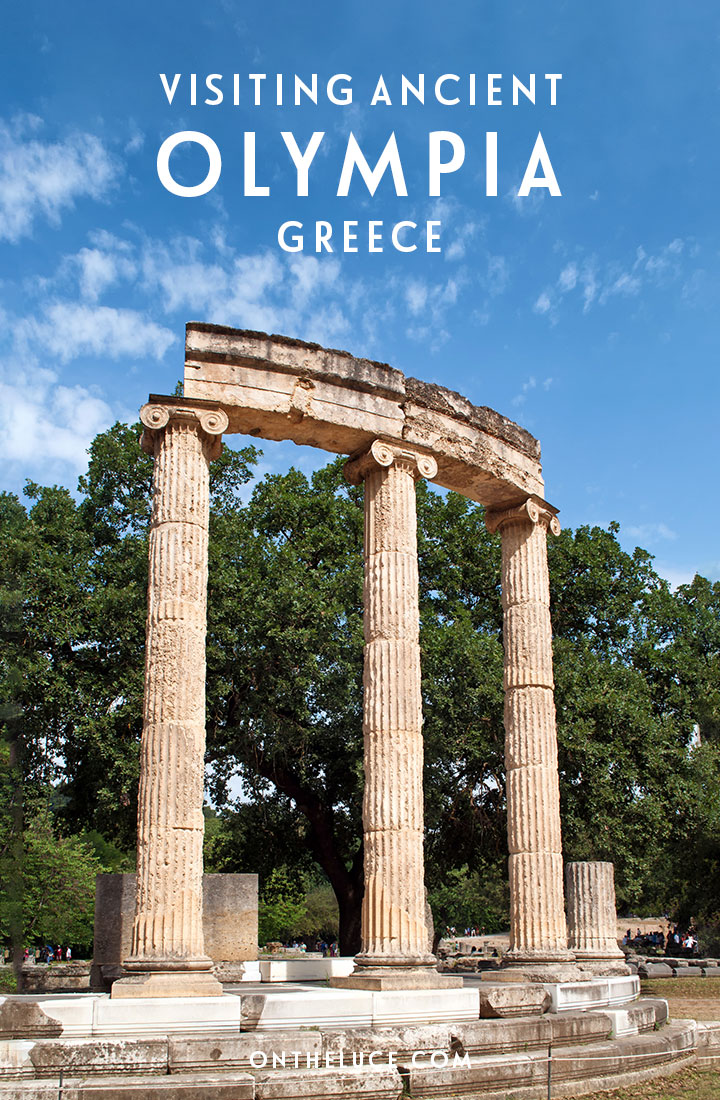 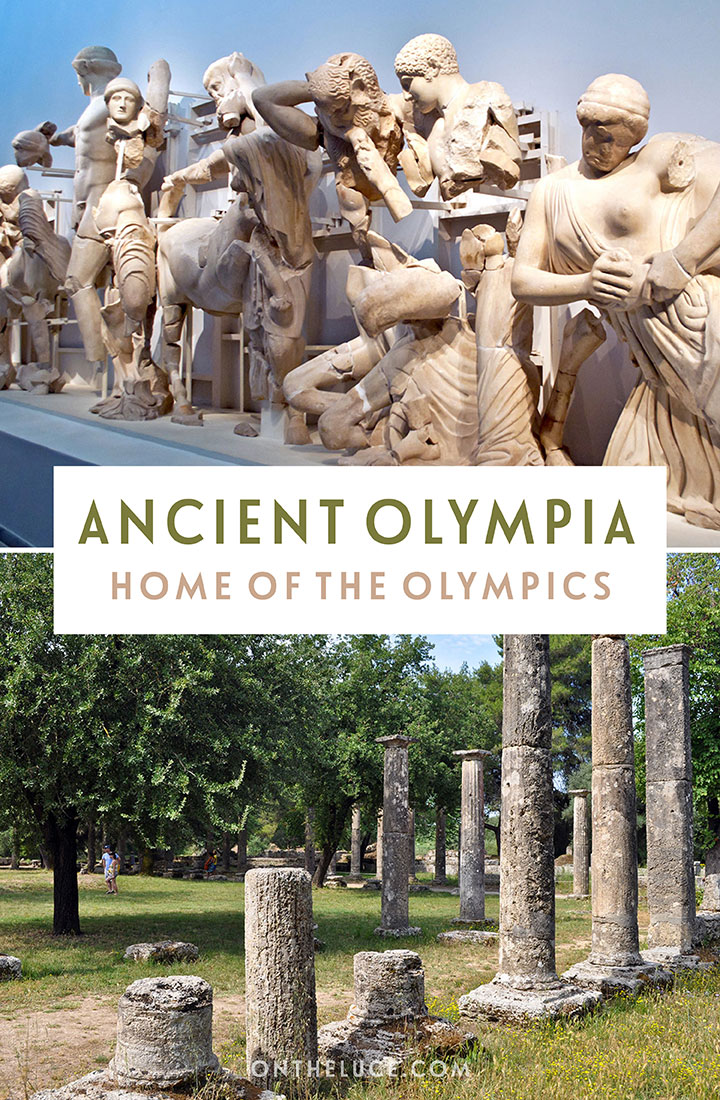 Lakes and lookouts: The best things to do in Lausanne, Switzerland

Great post Lucy. I visited Olympia in 2020 and i was happy i did it because due to corona no place was crowded. The highlight of our family trip in Greece was in Olympia because we used for the first time virtual reality glasses in the Archaeological Site! it was a great experience to be able to see the ruins and also see how they used to look like thousands of years ago. So my tip for those visiting Olympia is to get the virtual reality glasses before they visit the Archaeological Site. This is the website i booked them from www.olympiabackintime.com

I hâve been there with my class And we even ran on the stadium. Lots of memories!

Running in the stadium is a must-do – though I admit I only ran across the line! Glad to bring back some good memories.

Cool post! "The word athlete even means “healthy mind, healthy body”. So how disciplined, fair and moral you were was just as important." - I wonder what they would think of the doping that we currently have today. Or what the equivalent they had in their day?...

Very true, I imagine they had their own form of cheating back then too though, but I loved the way they shamed people for it, I'm sure that worked much better than any traditional form of punishment!

Thanks for all the info!! I've always wanted to go here but I do more now that I know all of this. I had NO IDEA they competed in the nude! I feel like I should have known this. :)

Haha, yes that was definitely a bit of information that I thought I would've heard about before for sure!

Yes there's a lot of the original philosophy of the Games that still remains – though the changes like clothes and women being able to compete are good ones to make!