Nine of the best things to do in Paris in autumn – discover why Paris is a great place to visit in the fall with its colourful parks, new exhibitions, wine tastings, spooky catacombs and quirky festivals.

Audrey Hepburn knew what she was talking about when she said ‘Paris is always a good idea’. There isn’t really a bad time of year to visit the French capital. But for me you can’t beat Paris in autumn. Crisp cool sunny days, crunchy golden leaves underfoot, steaming cups of hot chocolate, new exhibitions and wine festivals. What could be better?

The rentrée – or re-entry – is when Parisians return to the city after spending summer on the coast. Businesses reopen and Parisians claim the city back from the summer tourists. Autumn in Paris is the city’s second new year, when it wakes up from its summer slumber and gets back to work. But what essential experiences shouldn’t you miss if you’re visiting Paris this fall? Here are nine of the best things to do in Paris in autumn.

The weather in Paris in the autumn can be quite variable. Average temperatures range from a high of 17°C (62°F) to a low of 8°C (46°F). It’s not uncommon to get warm, sunny days in early autumn but the evenings can be cool, so pack some extra layers. And there are often a few showery days too, especially in November, so bring a light rain jacket or umbrella.

The best things to do in Paris in autumn

Autumn adds another dimension to an already beautiful city. The Seine is extra atmospheric at dawn or dusk on crisp, cool autumn days, when a fine mist hangs over the water. Along the river bank you’ll find street stalls with roasting chestnuts next to bouquiniste booksellers. But for the best Parisian autumn colours head to the city’s parks.

Grab a takeaway coffee, wrap up with a cosy coat and scarf, and take a walk. Paris heads outside when the sun’s out, with men playing boules, children running around and couples cuddling up. The Jardin des Tuileries and Places des Vosges both have fabulous foliage, but my favourite autumnal haunt is the Luxembourg Gardens. It’s Paris’ largest public park with over 22 hectares, so you’ll have no trouble finding a pile of leaves to kick through.

Or for something a bit different, why not head to the Promenade Plantée, a raised park on an old railway line in the east of the city that’s lined with gold and red trees in autumn. Or head just outside the city to the woods of the Bois de Vincennes.

A cemetery isn’t somewhere I’d normally choose to spend my time – anywhere other than in Paris. In autumn, Paris’ cemeteries ornate tombs, sculptures and stained-glass windows are draped with colourful leaves. Père-Lachaise is the grande-dame of Parisian cemeteries and the resting place of famous names like Oscar Wilde and Jim Morrison. But it’s just one of several 1800s cemeteries which were built around the old edge of the city.

The others at Montparnasse, Montmartre and Passy are just as beautiful, and much less well-known so you can have them almost to yourself. That’s except for on 1 November, a French national holiday when the country celebrates La Toussaint (All Saint’s Day) and families come from across Paris to lay flowers on their ancestors’ graves.

The réntree is also the start of a new cultural season in Paris, when new plays and exhibitions launch. The annual Autumn Festival, which runs from September until the end of the year, began in 1972 and has a mixture of different theatre, dance, music, film and visual art events and performances at over 40 different venues.

Paris also hosts an annual International Contemporary Art Fair (FIAC) each autumn (20-23 October in 2022). The fair brings together the work of over 1500 artists from around the world, ranging from big names to up-and-coming stars. The main venue for the fair is the glass-domed Grand Palais, but it also spreads out into the Petit Palais, Musée Eugène Delacroix, Tuileries Gardens, Place Vendôme and Place de la Concorde too.

4. Visit a museum or two

Autumn is also a good time to check out some of Paris’ museums. They often have new temporary exhibitions starting, but they also start to quieten down in autumn after being packed full of visitors in summer. The Louvre never gets exactly quiet, but you can minimise your queuing time either by booking a skip-the-line ticket*, or by visiting in the evenings on Fridays when the museum stays open until 9.45pm.

Paris has lots of other museums to explore too. There are the classics like the Musée d’Orsay with its Impressionist paintings and Rodin Museum with its sculpture garden. Or lesser-known spots like the Musée Cognacq Jay, an art museum in a mansion in the Marais. And for something quirkier, how about a tour of Paris’ sewers at the Musée des Égouts?

If you’re planning on visiting a few museums, a Museum Pass* is a good idea. They are available for 2, 4 or 6 days and give you skip-the-line access to over 60 sites, including the Louvre, Musée d’Orsay, Pompidou Centre and Picasso Museum.

5. Get spooked by the catacombs

Embrace Paris’ spooky side in time for Halloween with a trip to the Catacombs*. During the 1780s, Paris was growing so rapidly that its cemeteries were overflowing with no room for them to expand. So six million bodies were dug up and moved underground into some of the 175 miles of former mining tunnels that lie underneath the city.

Now a trip underground is one of Paris’ top attractions. A stone spiral staircase takes you down into the depths, where bones are piled up in stacks along dark, damp passageways. Original the catacombs were just going to be a storage area, but in the 1810s they opened to the public. There are no individual gravestones – just markers to show where the bones came from. But statues and urns scattered around add to the spooky feel.

Autumn is prime hot chocolate season, and Paris does some of the best in the world. One of the most well-known spots in the city for a good chocolat chaud is the Angelina tea room, with its beautiful Belle Epoque building on Rue De Rivoli. People queue out the door for a cup of their speciality thick ‘African’ chocolate blend, made from a secret recipe using a rich blend of cocoa beans sourced from Niger, Ghana and the Ivory Coast.

Another of my favourite Parisian hot chocolate spots is the Café de Flore in Saint-Germain. It’s one of the city’s oldest cafés and was a haunt of 1920s artists, writers and philosophers. The café’s notoriously grumpy waiters serve you one jug of melted chocolate and another of hot milk so you can mix them yourself and make it as rich as you can handle.

Summer in Paris is the time for baguettes, charcuterie, cheese and rosé picnics on the banks of the Seine. But autumn is the time to feast on all the most comforting Parisian food – from warm buttery croissants to steaming bowls of French onion soup.

Parisians stretch out terrace season for as long as possible, so many pavement cafés provide patio heaters and blankets so you can sit out in the autumn sunshine with an aperitif.

The cooler autumn evenings are a perfect excuse for a good glass of red wine, and there are a couple of special events each autumn in Paris to celebrate the new wine harvest. First there’s the Fête des Vendanges, a five-day celebration of the grape harvest centred around Montmartre’s one remaining vineyard each October (5–9 October in 2022).

The streets around Sacre-Coeur Basilica are filled with food and drink stalls and there are lots of special events. You can take a tour of the Clos Montmartre vineyard, and bid on a bottle of the latest vintage at the wine auction. Or get not-married to your partner by the local mayor in the annual Ceremony des Non-Demandes en Mariage.

These food and wine brotherhoods are dedicated to promoting different regional delicacies – from strawberries to snails, brie to brandy – and have their own traditional costumes and props (including the non-food-related order of bald men with their giant comb).

There’s also Beaujolais Nouveau Day (17 November in 2022), when you can taste the new release of this love-it-or-hate-it light and fruity red wine in bars around the city.

9. Party through the night at Nuit Blanche

One of the biggest nights in Paris’ cultural calendar takes place on the first Saturday in October (1 October in 2022). The Nuit Blanche – or White Night – is an all-night contemporary arts festival which has been been taking place in the city for 20 years.

The event takes place in museums, galleries and public spaces in both central Paris and the suburbs, which stay open all night for a range of different pop-up events. Everything is free, and with a mix of weird and wonderful interactive artworks, colourful projections, music and theatre performances there’s a real party atmosphere around the city.

Nuit Blanche runs from 7pm–7am, so you can keep going until morning, with free public transport running all night to help you get between events. 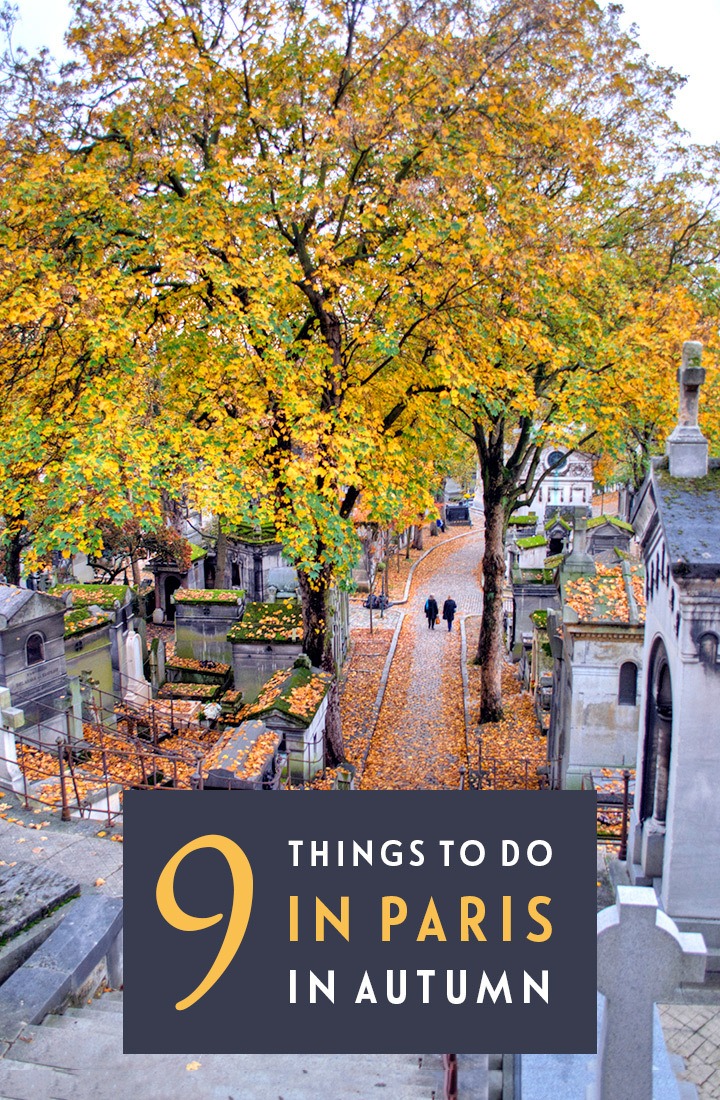 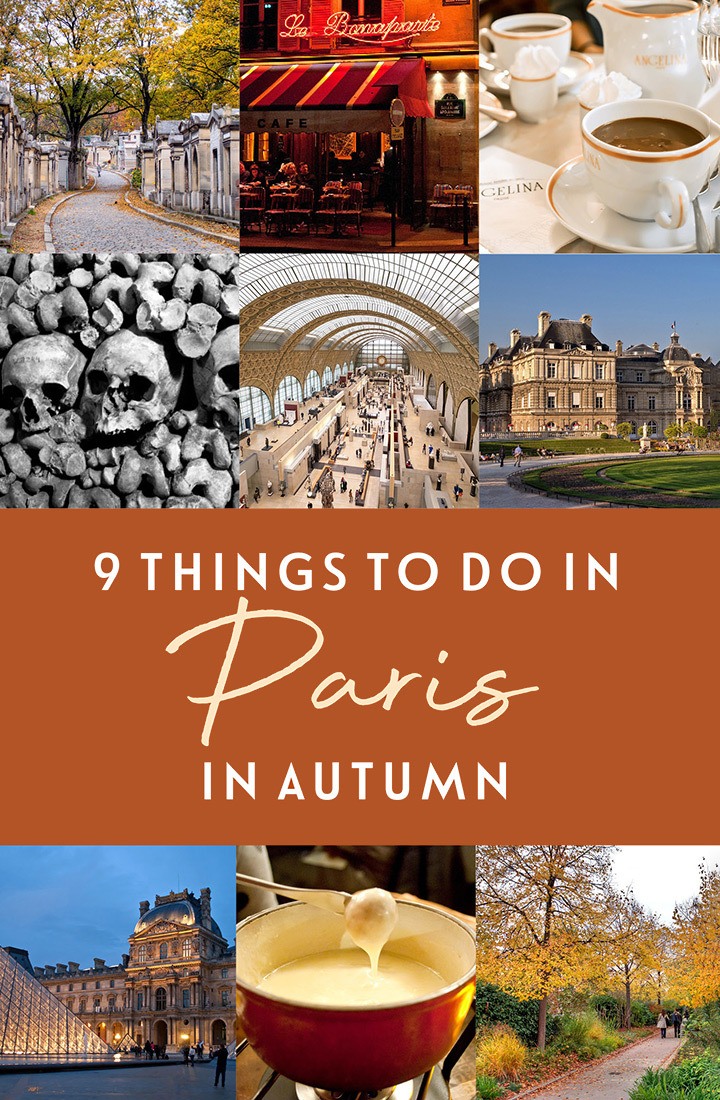 Paris in winter: 9 of the best things to do in Paris at Christmas

Thanks so much for the great tips! This is my first Autumn living in France and I hope to be able to see these beautiful fall colors in a few weeks!

It's a bit of a different autumn this year but hopefully the colours are still beautiful!