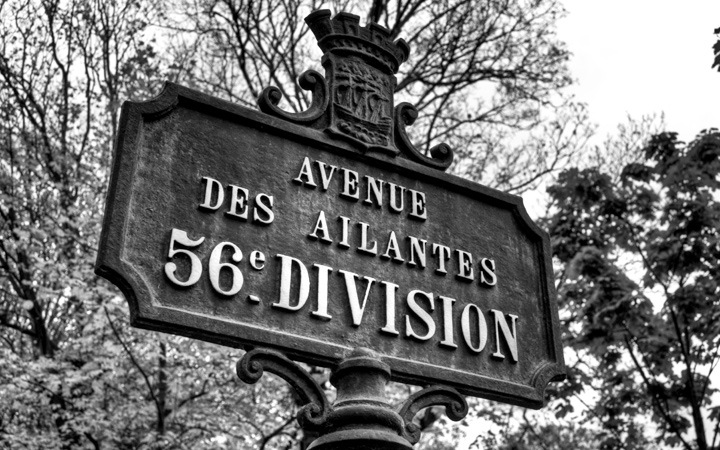 Think cemeteries and you probably imagine they’re going to be depressing places to spend your time, but not so in Paris. Its cemeteries are full of decoratively carved tombs with stained glass detailing, beautiful statues, and wide boulevards surrounded by colourful trees and flowers. Used almost like parks by the city centre residents, they are a relaxing place for strolling, sitting and even picnicking.

These ornate cemeteries date back to the early 1900s. Paris had been growing rapidly and by the late 18th century its cemeteries, originally built on the outskirts of the city, became penned in by buildings and had no room to grow. This meant overcrowding and disease, and by 1786 the city centre cemeteries were condemned, all bodies were moved underground to the catacombs and cemeteries were banned in central Paris. So in the early 19th century a group of new cemeteries were built outside the city – in Montparnasse to the south, Montmartre to the north and Père-Lachaise to the east. Today these areas have been incorporated into the city and are easy to access if you are looking for a peaceful escape from the crowds. 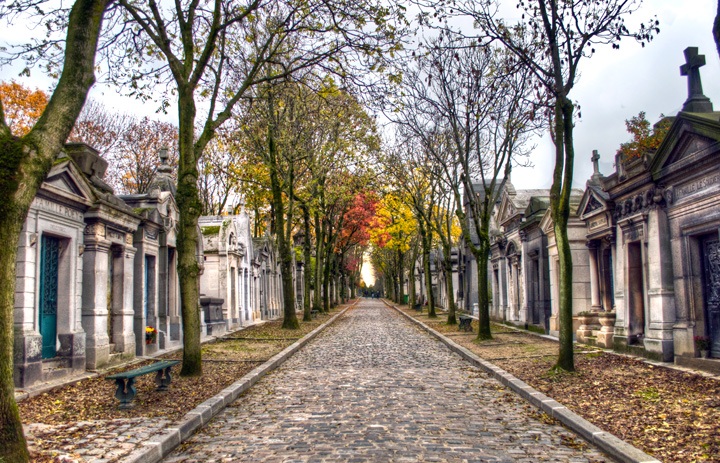 My first cemetery visit was to the Cimetière du Montparnasse in the south of Paris (nearest Metro at Montparnasse Bienvenüe). It opened in 1824 and covers 45 acres of former farmland, making it one of Paris’ largest green spaces. It’s the final resting place of artists and intellectuals – from sculptors Antoine Bourdelle and Frédéric Auguste Bartholdi (who designed the Statue of Liberty), photographer Man Ray and singer Serge Gainsbourg, to philosophers Jean-Paul Sartre and Simone de Beauvoir. Visitors still leave heartfelt hand-written notes for Simone de Beauvoir and flowers and Metro tickets on Serge Gainsbourg’s grave.

The caretaker here and at the other cemeteries can supply a map showing where you can find the graves of these and other famous residents. These graves have been declared historic landmarks by the city of Paris, but the less-famous might find that their final resting place isn’t actually ‘in perpetuity’, as many tombs have carved into them. If your descendants don’t pay for the upkeep of the grave then the site can be resold, with up to 1000 new burials happening every year. 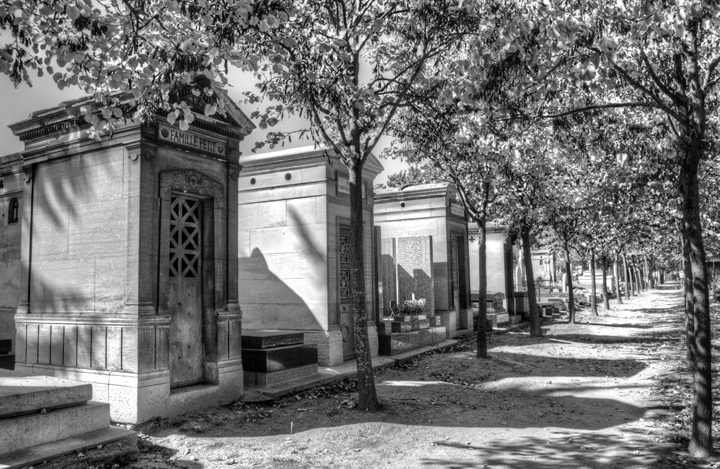 My second cemetery visit was to the larger – and much more visited – Cimetière du Père-Lachaise in the east of Paris (nearest Metro at Père-Lachaise or Philippe Auguste). The cemetery takes its name from King Louis IV’s confessor Père de la Chaise, who had a house where the cemetery’s chapel stands today. Originally when it was opened in 1804 nobody wanted to be buried here as it was too far out of the city centre. So in an early bit of marketing, the graves of author Molière, poet La Fontaine and later famous lovers Abélard and Héloïse were moved to Père-Lachaise.

After that its reputation as burial place for the rich and famous made it the place to be buried for Parisians. Today there are over a million people buried on its 110 acres and its beautiful setting and the range of extraordinary people buried there combine to make it the most-visited cemetery in the world. 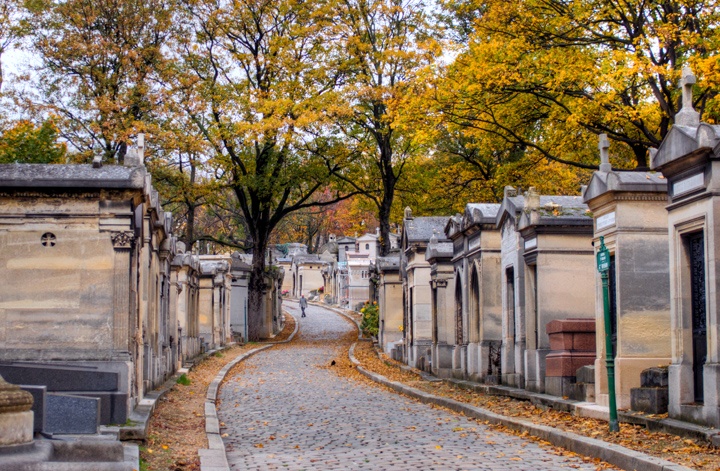 Père-Lachaise is a city within a city, with divisions marked by street signs. Its famous inhabitants include big names from France and internationally, from the worlds of art, music, literature, politics and the military. You can wander around for hours looking up the stories of their lives, from the world-famous to the previously unknown. The biggest draws for visitors include Oscar Wilde, whose gravestone is covered with lipstick kiss marks, and Jim Morrison, who died in Paris at age 27. His burial has been a bit more controversial as the cemetery had to employ security guards to watch the site after fans covered the grave with graffiti and offerings of drinks and cigarettes, playing music and partying. 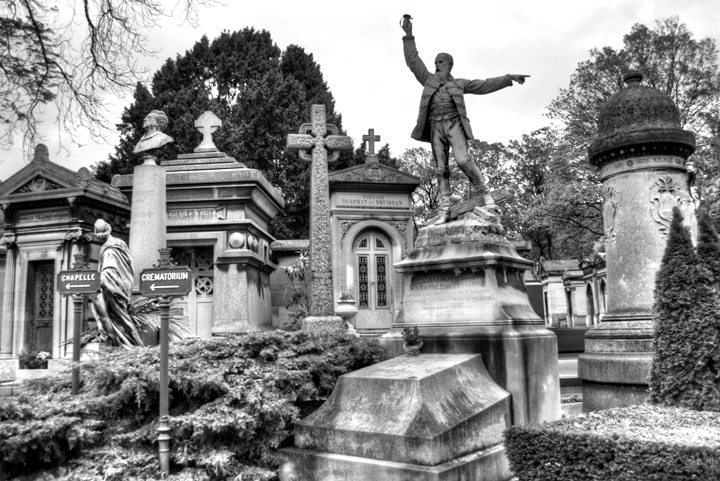 Sculptures and tombs in Père-Lachaise cemetery

Away from the famous graves, the cemetery is known for its sculptures and ostentatious tombs as the 19th century families tried to outdo each other with the biggest and best monuments. Built on a hill, the climb up to the top is worth it for the view across the trees and gravestone and further out to the city itself. And if you’re in the city on 1 November for la Toussaint (aka All Saint’s Day), it’s a national holiday when families across Paris bring flowers to the graves of their ancestors. All the city’s cemeteries are bustling with people and covered in colourful flowers, bringing new life to these ‘cities of the dead’. 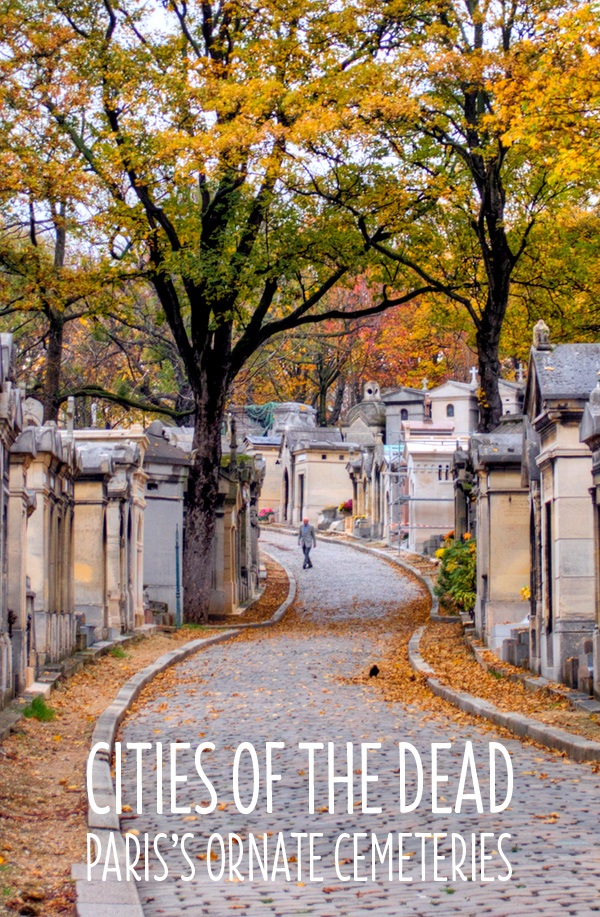 Paris on a budget | On the Luce

[...] elevated railway line, the botanical gardens at the Jardin des Plantes, and even the atmospheric cemeteries, like Père-Lachaise and the Cimetière du [...]

Autumn in Paris: How did I do? | On the Luce

[...] things I would come across. From the spooky catacombs with their underground bone stores and the ornate cemeteries at Père Lachaise and Montparnasse, to the raised Promenade Plantée park on an old railway line [...]

Thanks for the pictures and history of them. I will need to add them to the list for my next trip to Paris.