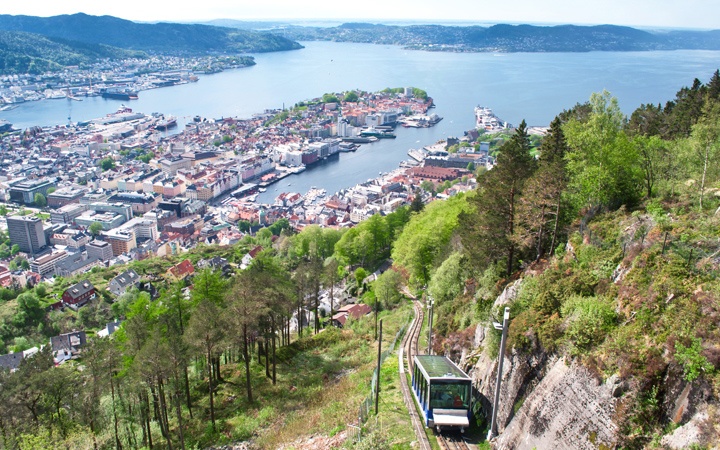 Looking out over a place from high above is always one of my favourite things to do in a new destination, but after a day wandering the cobbled streets of the Norwegian city of Bergen, my feet were staging a protest at the thought of climbing a mountain. But luckily Bergen has the Fløibanen funicular railway to take the strain on the way up to the city’s best viewpoint. It only takes just over five minutes to climb up to the top of Mount Fløyen, following a 844-metre-long track that runs at an angle of 26 degrees. Despite some ominous clouds above us and my mum’s fear of heights it was a Bergen must-do. So we bought our tickets and boarded one of the two 70-person carriages that ferry almost a million visitors up this route every year. 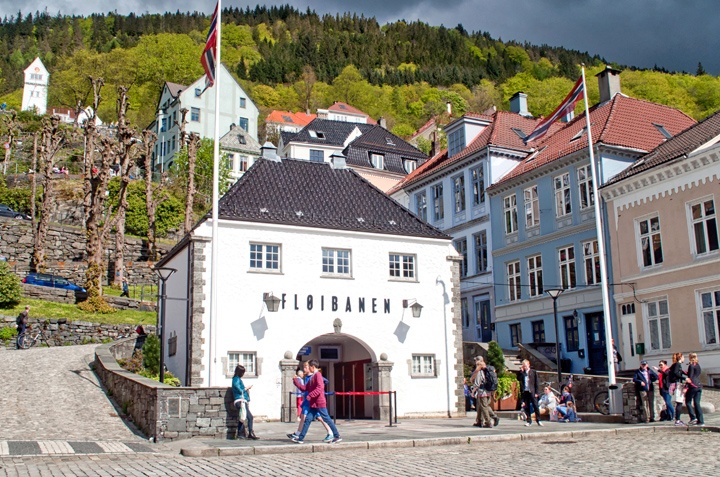 The start of the Fløibanen funicular railway

The idea for a cable railway to take passengers up to the top of Mount Fløyen was first dreamt up by a local politician called John Lund in 1895. Work didn’t actually start on building it until 1914 though, and it was supposed to take a year but the First World War meant a shortage of materials and labour. The funicular eventually opened in 1918 and has been running ever since. It’s one of Norway’s most popular attractions, though it was hard to see why as we emerged into thick clouds and pouring rain at the top. But as the showers passed and the clouds faded, a panoramic view across Bergen started to unfold. 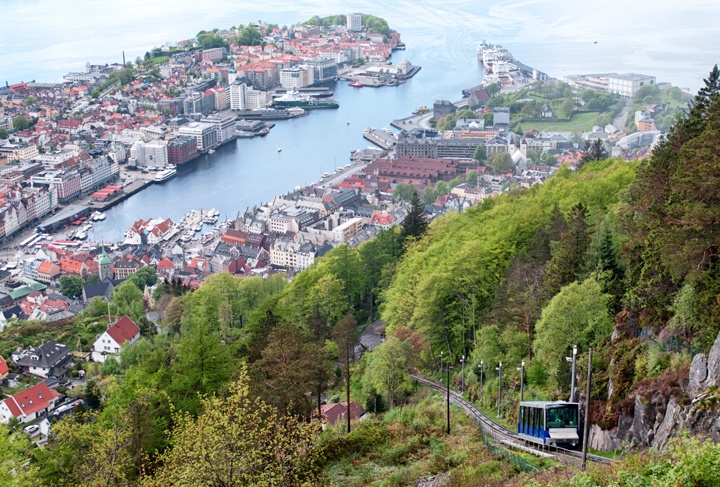 The Fløibanen climbs steeply up the side of the mountain

At 320 metres up above the city you can see for miles around – down to the tiny houses and the boats in Bergen harbour, and out across the mountains and the fjords that twist and turn their way off into the distance. A big viewing platform called the Fløytrappene stretches out around the top of the mountain. It has lots of different levels so you can choose your favourite view, including a glass and granite ledge sticking out where you can watch the next train arriving underneath you. There is also a café and restaurant where you can stop for a drink with a spectacular backdrop. 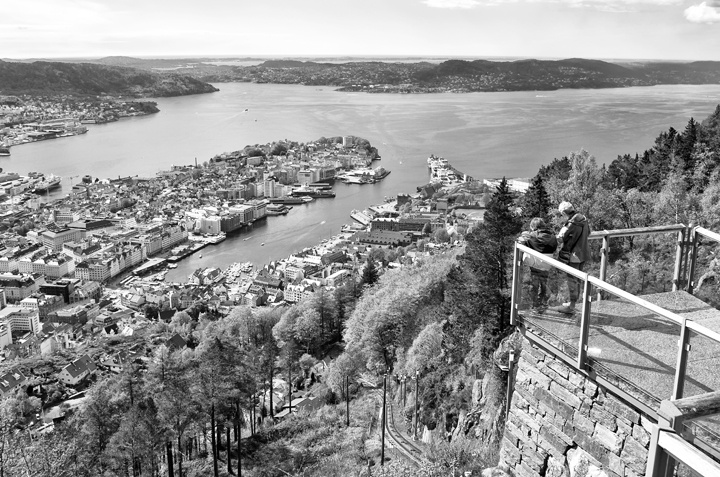 Around the top of Mount Fløyen there are a whole network of walking paths. You can pick up a hiking map from the station or tourist office, with details of 10 walking routes, covering a range of different lengths and levels of difficulty, passing through lakes and mountain meadows. As the skies turned to blue, we went for one of the easier walks, the 40 minute downhill stretch back into the centre of Bergen. The path wound down through the forest, with occasional glimpses out across the fjord from between the trees. 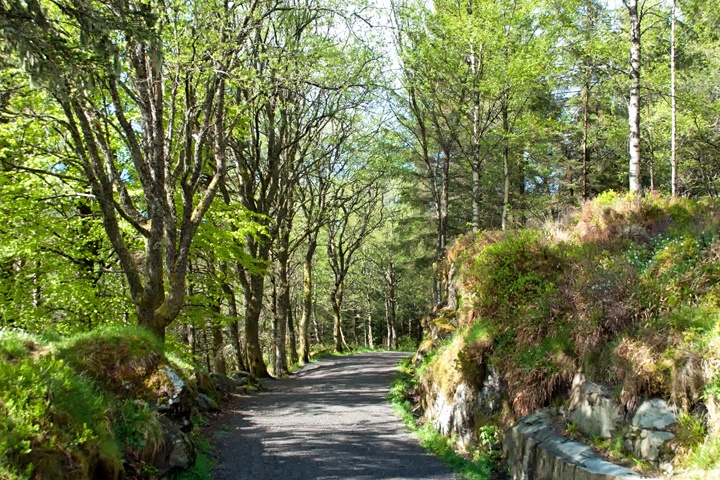 The forest path winds its way back down to Bergen

As you walk you’re surrounded by Norway’s natural beauty – streams surrounded by moss-covered rocks and tiny wildflowers poking up through green meadows. But don’t be surprised if you spot something a bit more supernatural – this is troll country. Trolls have featured in Norwegian folklore since the 9th century, these strange creatures that make their homes hidden away in isolated forests, mountains and caves. Today they are big business here and you can’t go far without coming across troll figures or troll-hunting trips. 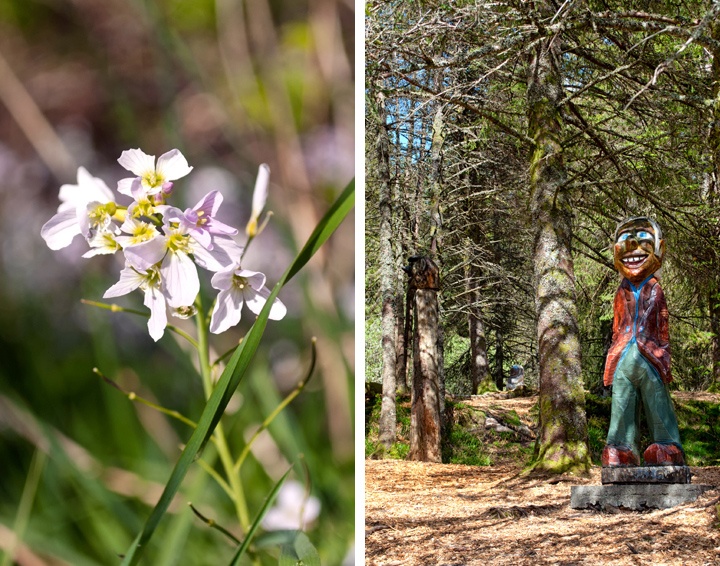 Local flowers and wildlife along the pathway

But the path down from Mount Fløyen is likely to be the nearest you get to spotting one in the ‘wild’. Dotted between the trees are carved statues of trolls, from the small and cute to the big and ugly. Painted in bright colours of left as natural wood, some are right by the path and some are hidden deep in the woods. You can do your own troll safari around the top of the mountain, before descending out of the world of myths and legends and back onto the streets of modern-day Bergen below. 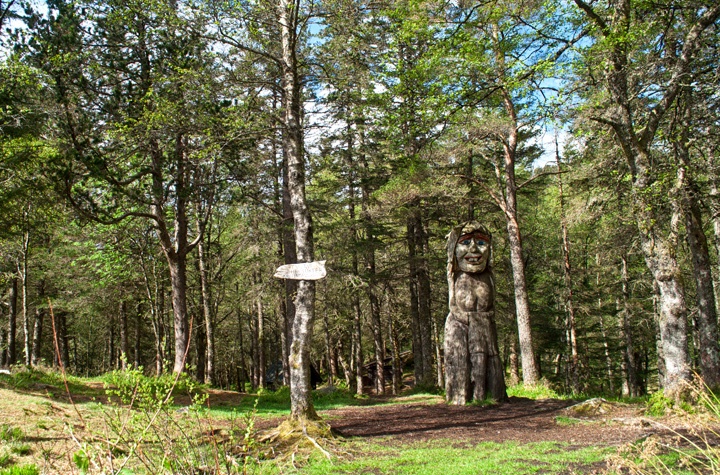 Trolls among the woods

The Fløibanen starts from the centre of Bergen, at the top of Vetrlidsallmeninngen Street, a couple of minutes’ walk from Bryggen wharf and the fish market. It’s open every day, from 7.30am (or 8am on weekends) until 11pm, and runs every 15 minutes from 10am to 7pm and then every 30 minutes for the rest of the day. A return ticket costs 90 NOK/£8 or a single is 45 NOK/£4, with discounts for children, over 67s (except during June–September) and if you have a Bergen Card. 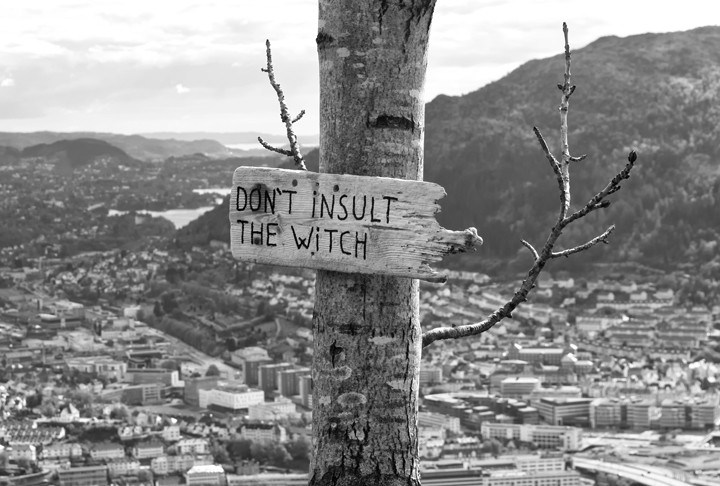 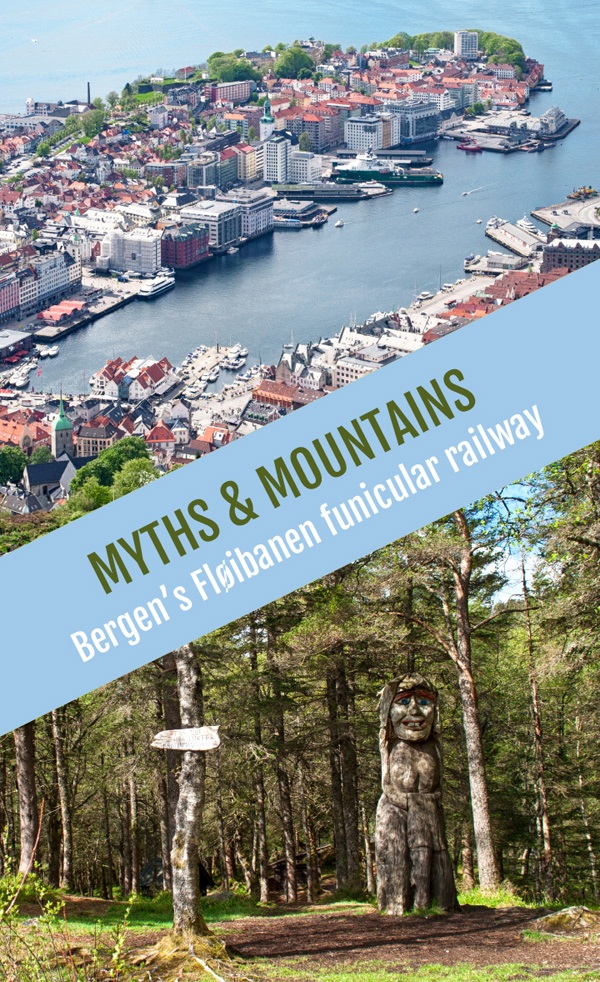 Hi Tim, afraid I don't know who built it but it was built for the opening of the railway in 1914.

Thanks for the camera info :-) I am planning to spend 5 days in Bergen. Would you recommend buying a Bergen card?

Hi, the Bergen Card looks like a good deal if you're planning on visiting a few of the attractions as it also includes travel and the airport bus. Though as with a lot of these cards it's better value the longer you're staying!

I chanced upon your blog, and now it is one of my favorites!!Simple narration style and amazing shots. Your blog is quite informative. I am planning to visit Norway in October. Could you please tell me what kind of camera you are using?

Thanks Anjali – and hope you enjoy Norway. These photos were taken on a Nikon D5000 (it's quite an old model so I think the current version is the D5600), though I've recently upgraded to a mirrorless camera and use a Fuji XT1.

Wonderful post, Luce. I have been looking into things to do in Bergen because we will be there for a day as part of a cruise. Your post is the best description I've found, and I think we'll do exactly what you did!

So glad it came in useful – have a fantastic trip!

We went to Bergen this time last year and i loved that view! you could still see the snow, but it was warm enough to take the walk back down the mountain. I dont know how people run up it though!!