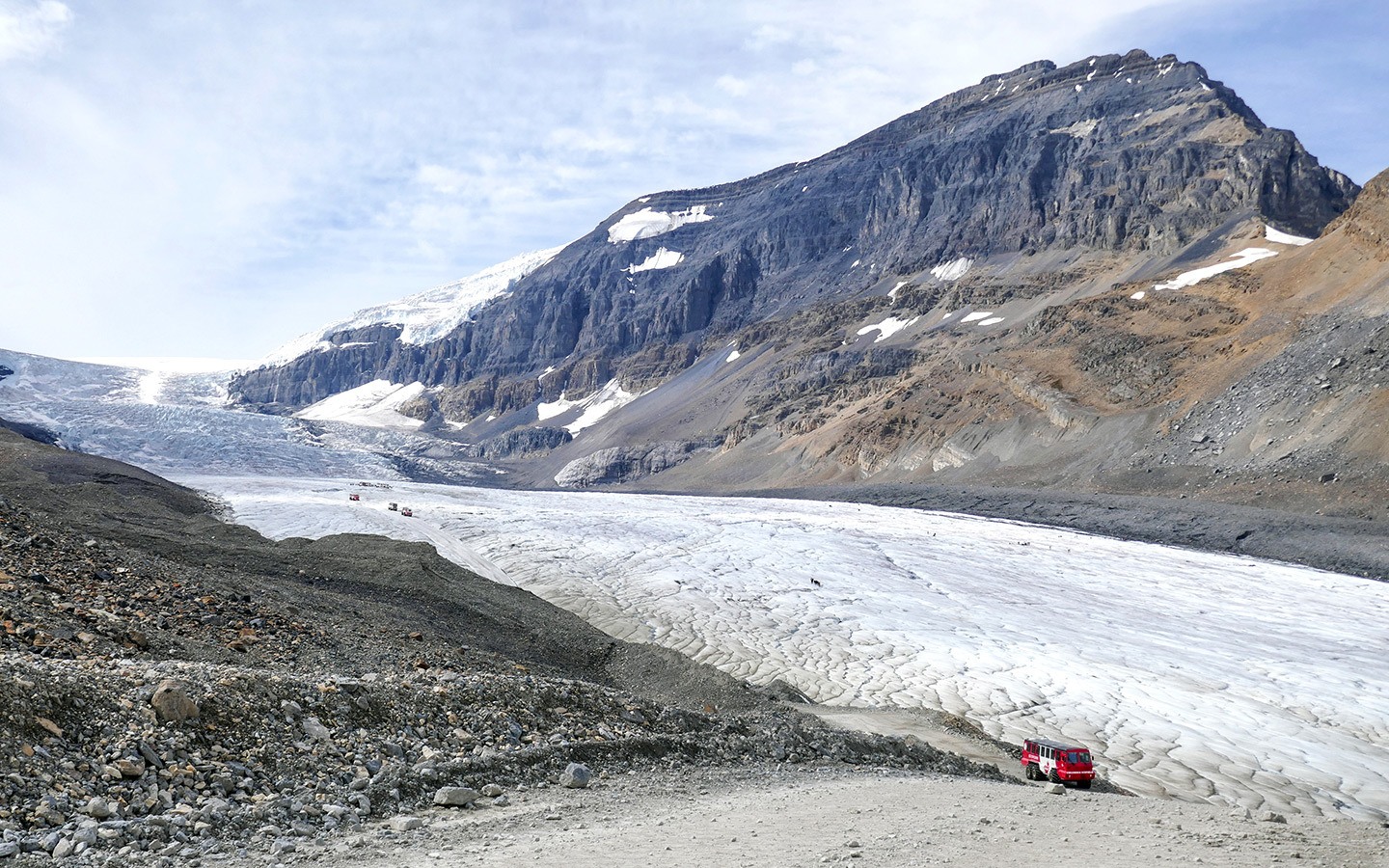 An otherworldly landscape carved from living, shifting ice, some of it dating back thousands of years, the world’s glaciers are some of its strangest and most beautiful places. But they’re not exactly easy to see for yourself – normally to get onto a glacier’s surface you need a helicopter, ice axes, crampons and a few years’ mountaineering experience. Not the Athabasca Glacier in the Canadian Rockies though, where the ice explorer vehicles which take you on a Columbia Icefields tour mean anyone can experience walking on the surface of a glacier.

Read more: Vancouver to Jasper by train: The Rockies on a budget with VIA Rail 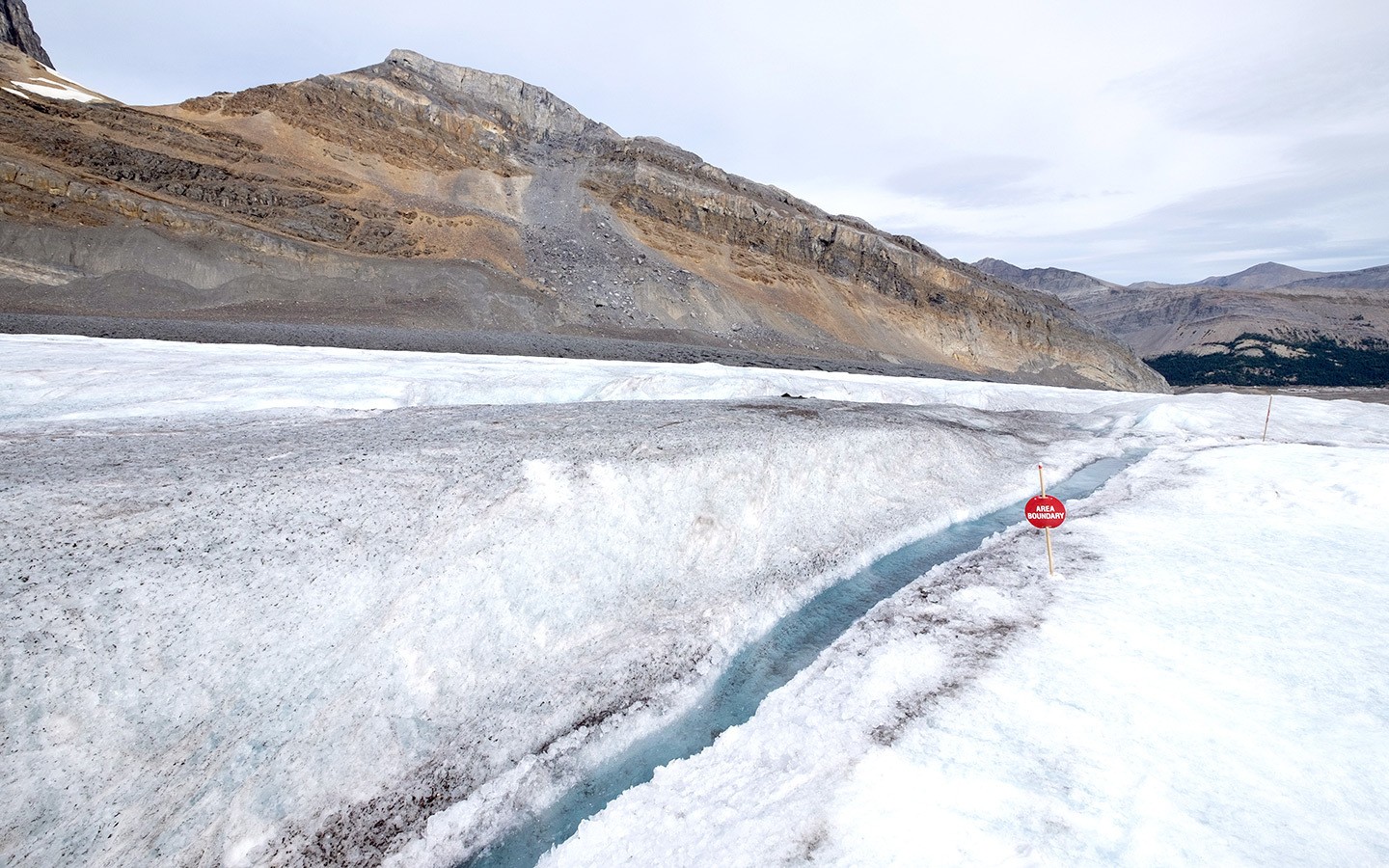 Bright blue streams on the glacier

About the Athabasca Glacier

The Athabasca Glacier forms part of the huge Columbia Icefield – the largest icefield in North America south of the Arctic. It covers 325 square kilometres and is up to 365 metres thick, which is deep enough to bury the Empire State Building. And it’s one of only two places in the world on a triple continental divide, which means that meltwater from the ice goes into three different oceans, flowing north to the Arctic, east to the Atlantic and west to the Pacific.

The Columbia Icefield stretches into both Jasper and Banff National Parks. The bulk of it is hidden away behind the mountain peaks of the Rockies, but you can see three of the six major glaciers which it feeds into from the Icefields Parkway. Most accessible is the Athabasca Glacier, located around 100km south of Jasper. Being so close to the Parkway has made it the most visited glacier in North America. But it’s not going to be around forever.

Like many glaciers around the world, the Athabasca is under threat from climate change. It’s lost over half of its volume over the past 125 years and each year it retreats by around 1.5 metres and loses five metres in depth. There’s a rocky, Moon-like moraine landscape and a large lake in front of the glacier now, where previously it came almost up to the road. At the moment it still covers 6km but it’s a sobering thought to think it could all be gone within a generation. 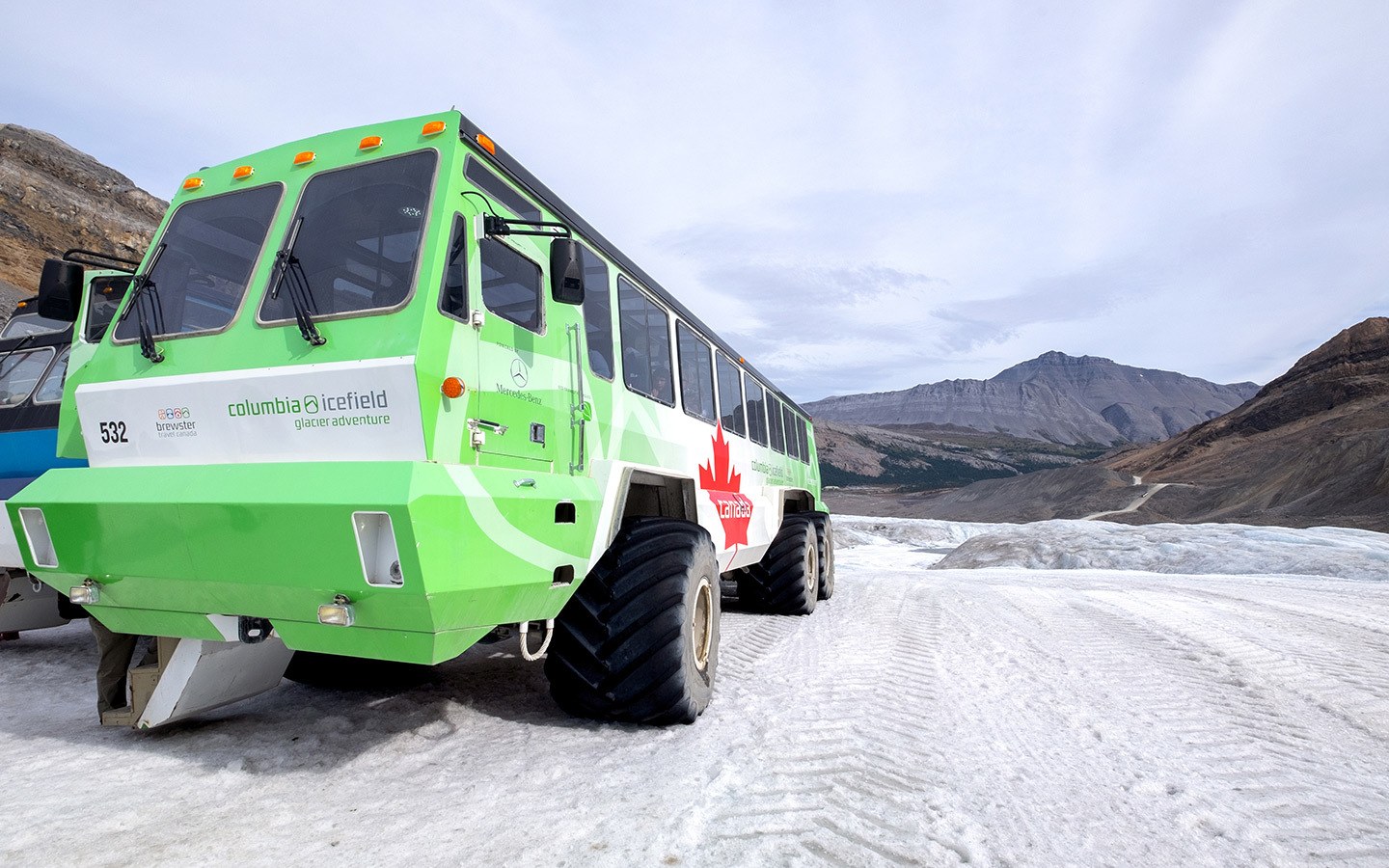 On the glacier in our ice explorer

I’ve seen glaciers before on my travels but have never actually been out on the ice, so couldn’t miss the opportunity to try it in Canada. So we signed up for a Columbia Icefields glacier tour, which combines a glacier walk and the Skywalk observation deck. The tour starts from the visitors’ centre, which is opposite the glacier and right alongside the Icefields Parkway, one of the most spectacular road trips in the world which connects Banff and Jasper.

A short coach ride took us across to the base of the glacier and the transfer station, where we swapped our bus for a far more exciting sounding ice explorer. There are only 23 of these specially designed vehicles in the world, with some being used in Antarctic research stations. Each is four metres high, weighs 25 tons and can carry up to 56 passengers. Giant wheels and low pressure tyres help them grip on to steep gradients and slippery slopes. 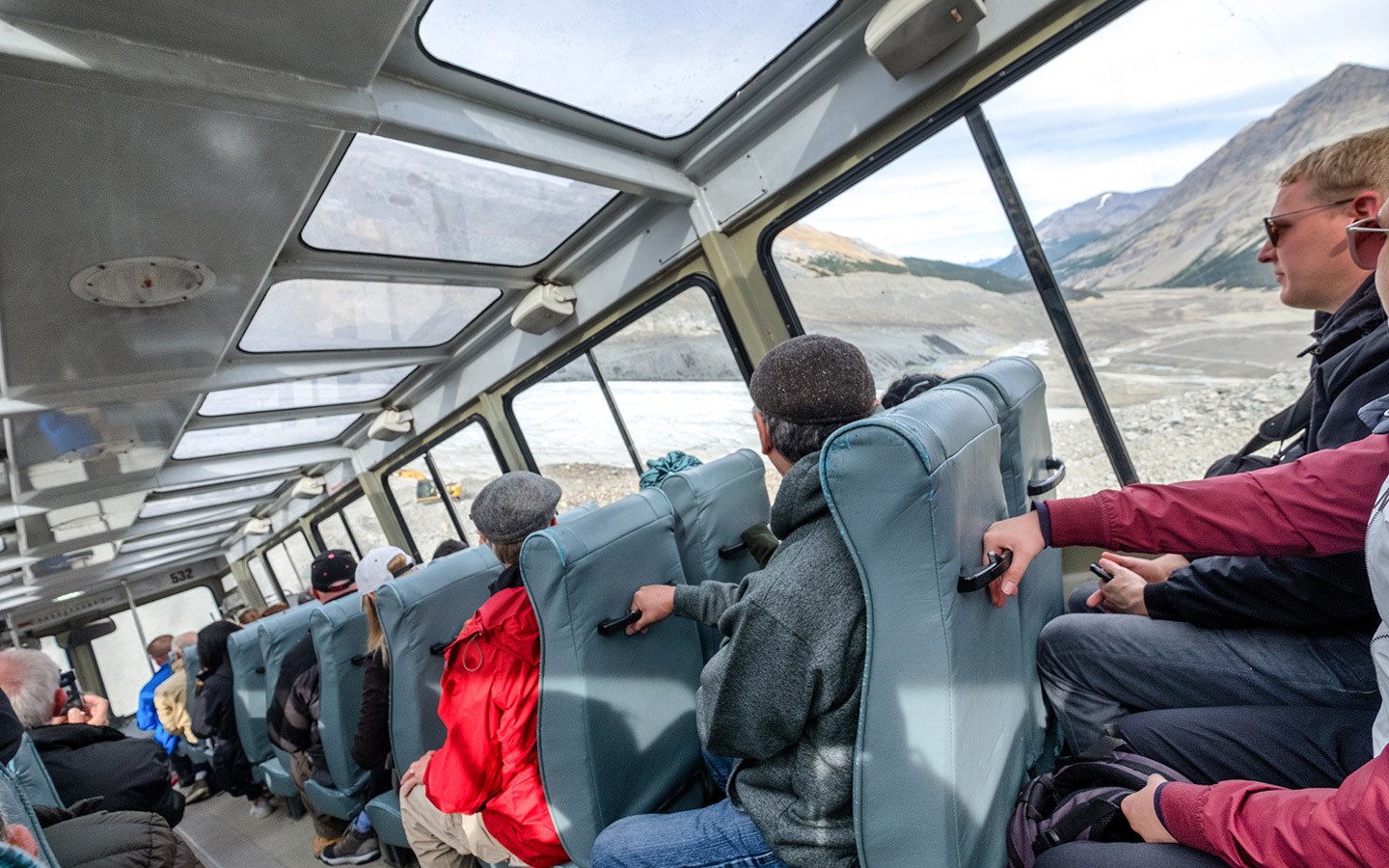 Heading down the steepest stretch

Each ice explorer costs over $1.3 million CAD, but one thing they’re not is fast, so there’s plenty of time to soak up the views. We headed slowly downhill along a rocky road cut into the glacial moraine to reach the steepest straight road in North America (Lombard Street in San Francisco gets the honour of being the steepest but that’s paved and has eight hairpin turns so this one feels a lot more dramatic!) with the whole vehicle tilted onto a 45-degree angle.

From a distance the glacier looks an almost uniform off-white colour, but as you get close to the ice you can see it’s made up of all different shades, from pure white to dirty brown. The discoloration is due to a build up of dirt, dust and rock known as cryoconite. Dirty glaciers can melt quicker, so before we got onto the glacier surface the ice explorer passed through a stream so clear the tyres off so they didn’t add unnecessary dirt and contribute to glacial melt. 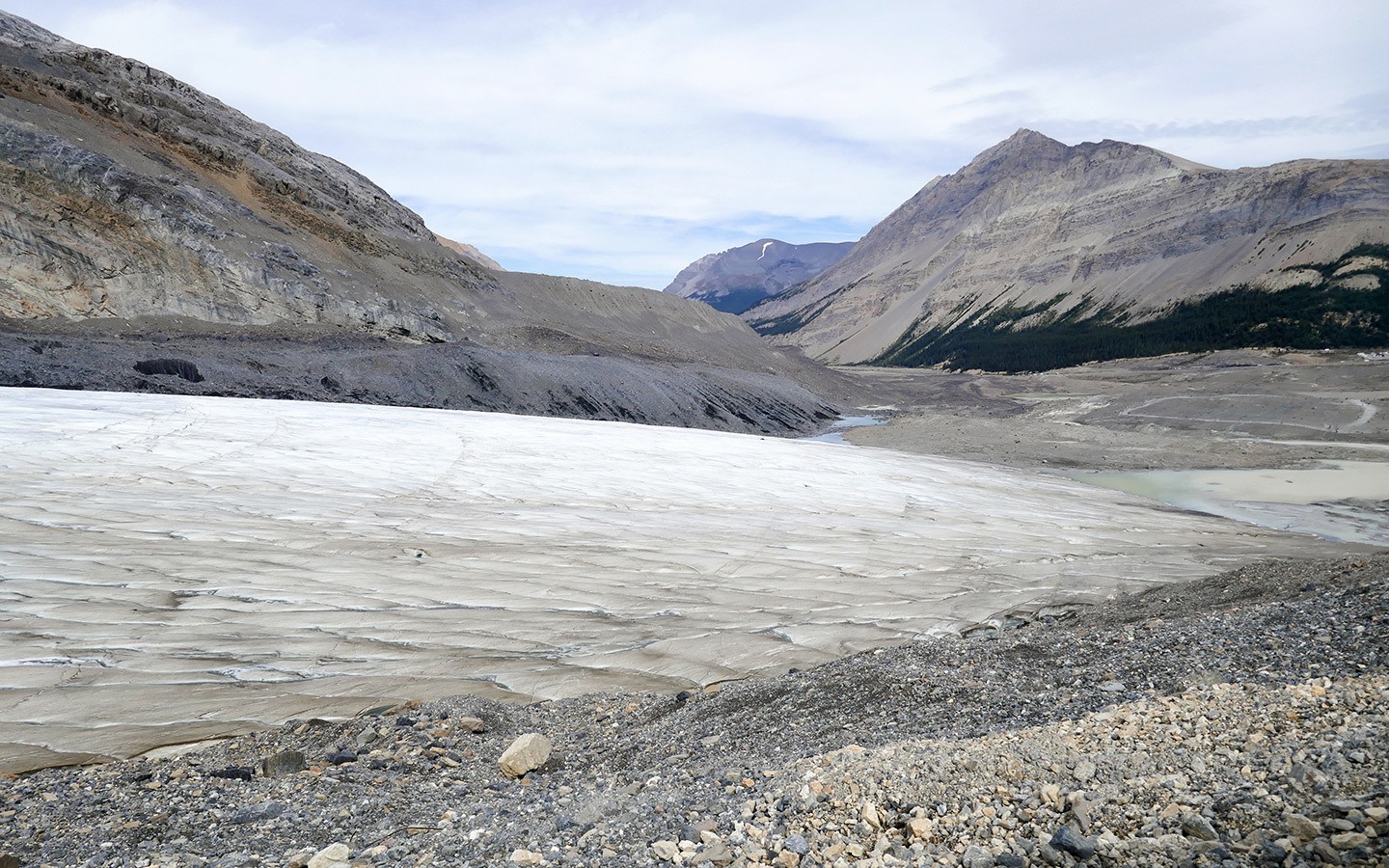 The foot of the glacier

Glaciers are formed when snow builds up in one place. As more layers of snow are added, they compress the layers underneath and squeeze out all of the air, turning the snow into dense ice. But what’s so fascinating about glaciers is how they move. The weight of these giant sheets of ice causes the ice at the bottom to melt and the glacier slides along the ground, crushing everything in its way. The ice at the top is more flexible than at the bottom so cracks form.

The glacier might look static on the surface, but it’s constantly on the move and new crevasses can form anywhere. So we couldn’t just wander off onto the ice wherever we fancied – if you do want to do a proper hike you need a guide, but for those on the glacier tour there’s a specially marked off, monitored section where you get to spend 25 minutes on the ice. 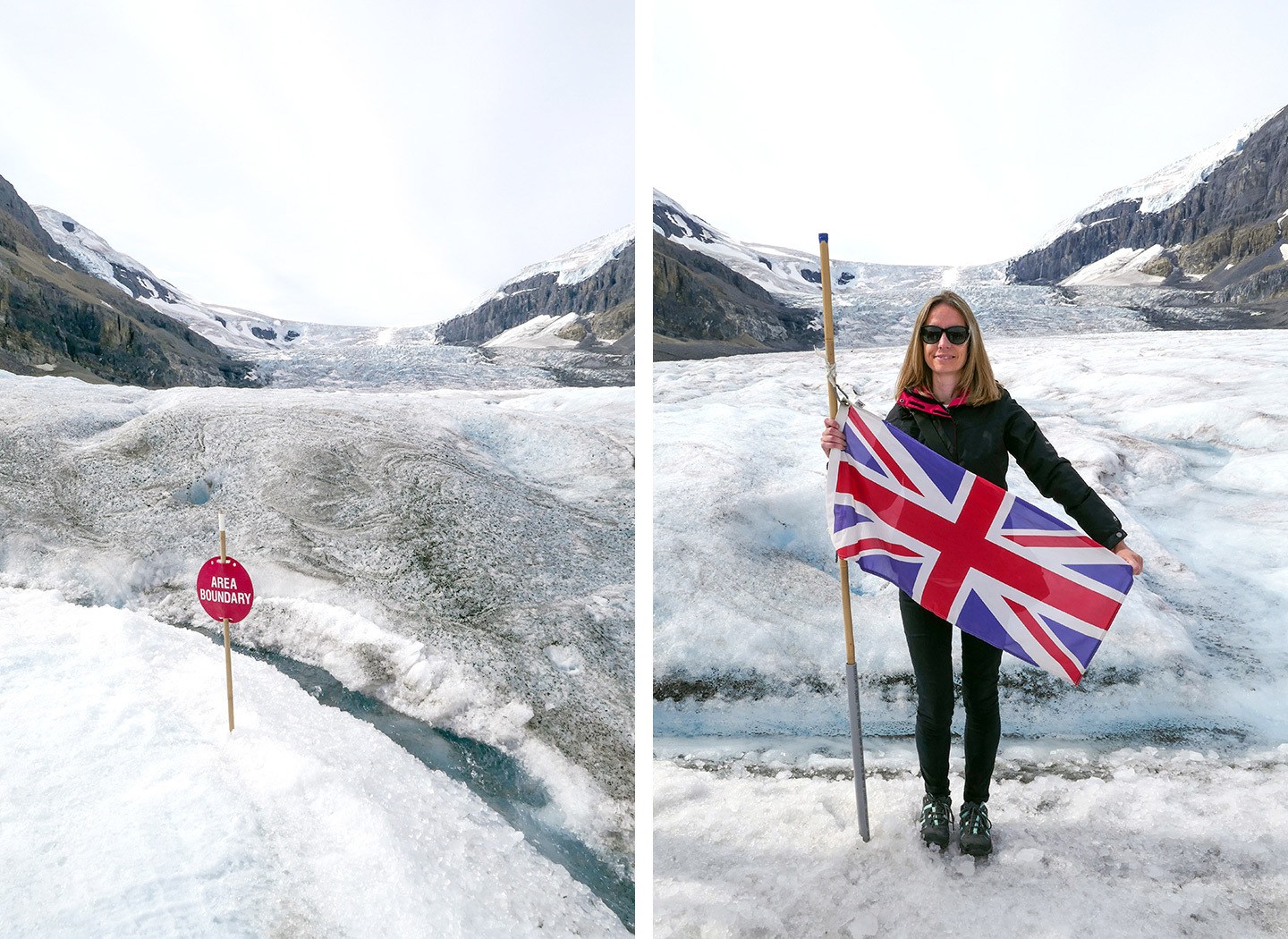 Looking up the glacier

The glacier walk is one of the most popular activities along the Icefields Parkway so you don’t exactly get it to yourself, especially in the peak summer months, but there’s still space to walk on the ice, throw a snowball or two, or get your photo taken with the line of flags from different countries. Streams of meltwater run down through grooves on the icy surface, and if you bring a water bottle you can fill it up with pure, cold water straight from the glacier.

Up close you can see even more colours in the ice, with patches of vivid blue in among the white, which form when all the air is squeezed out of the snow and giant ice crystals form. It was amazing to think how old some of the ice in the glacier was, how long it had been there and how it had changed the landscape around it, cutting down through the Rockies to form steep v-shaped valleys and scouring the ground beneath it into smooth surfaces. 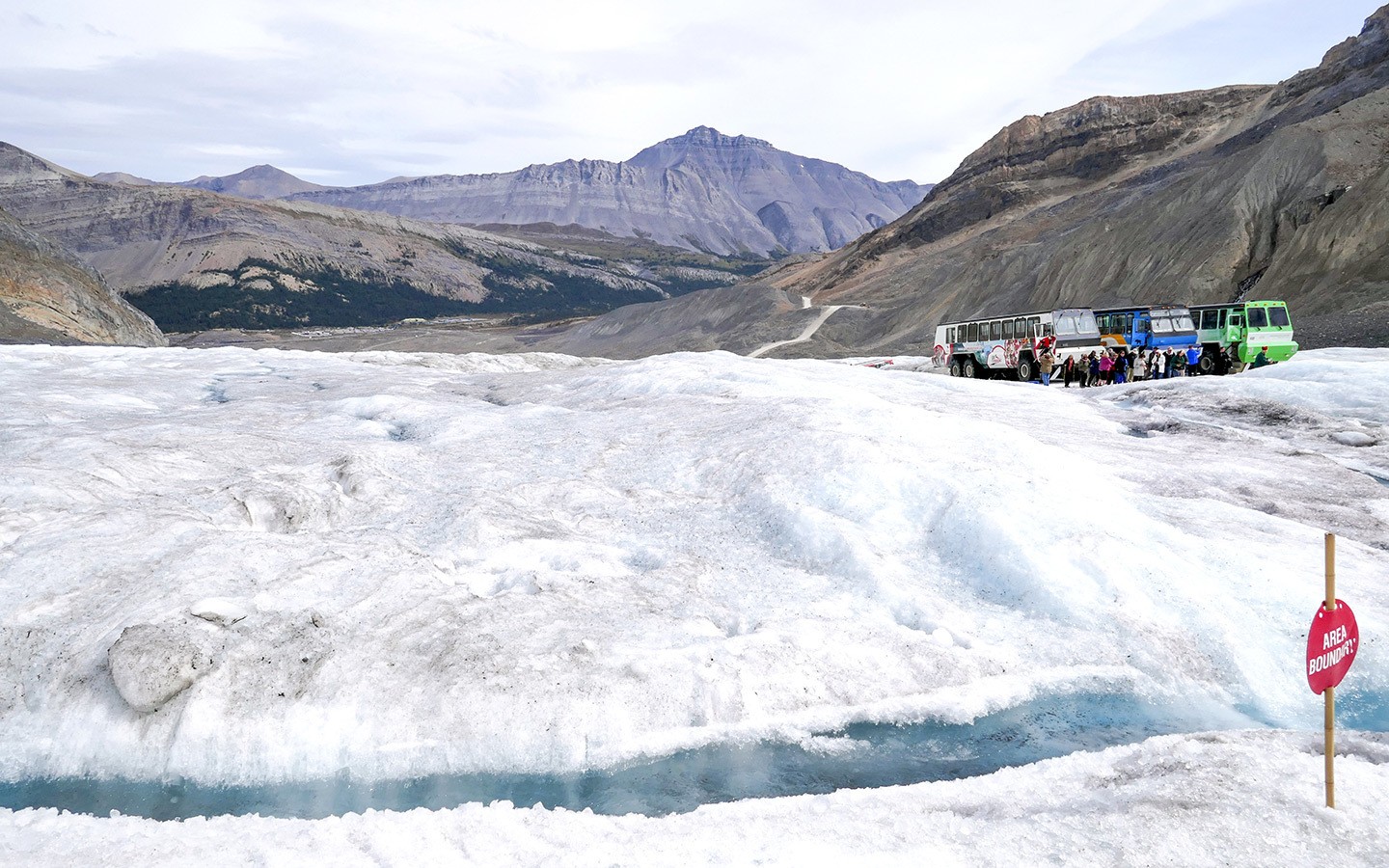 Ice explorers on the glacier

Our time on the glacier over too fast, we climbed back on board the ice explorer for the journey back to the transfer station. But although they’re incredibly expensive, high-tech pieces of kit, that doesn’t mean they don’t have their moments – and ours decided to have one halfway up that incredibly steep section of road. As it crawled its way back up the slope we suddenly stopped. For a minute I thought it was all part of the show, until our guide radioed for help.

We were reassured that he had the handbrake on and his foot on the brakes so we weren’t going anywhere, but there’s something disconcerting about hanging around at a 45-degree angle. A mechanic sent down the hill decided it might be something to do with the hydraulics, so a rescue mission was mounted and a spare glacier bus was sent down to pick us up, an impressive bit of driving involving backing down the hill while all other buses waited for us. 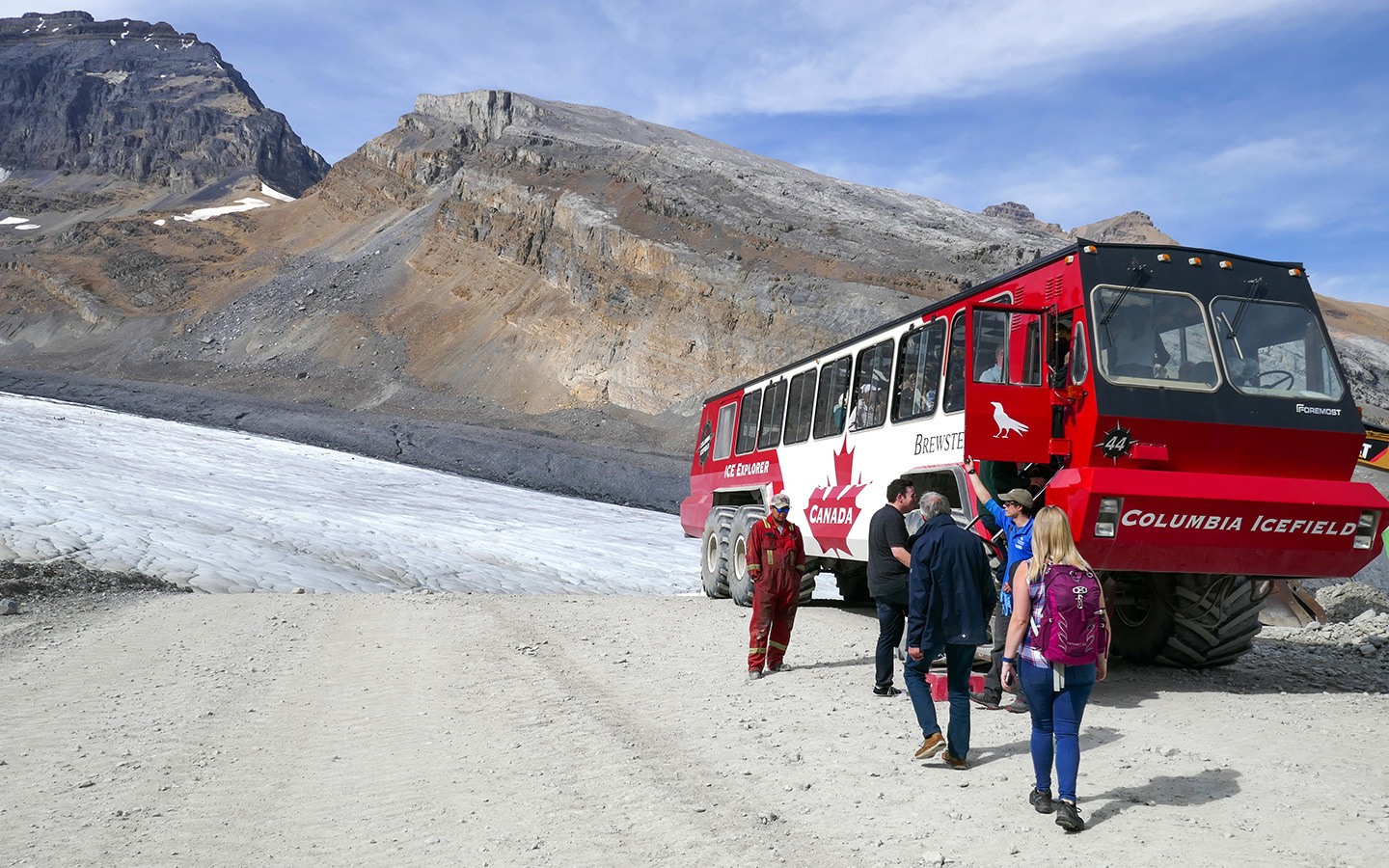 Back at the transfer station in ice explorer number two, we were assured that things normally run a bit more smoothly – and given drinks vouchers for the café – before catching the bus on to the Glacier Skywalk, the second part of the Columbia Icefields tour. The Skywalk is a kilometre long walkway along the edge of a cliff looking out over the Sunwapta Valley, with interpretive displays along the trail which tell you about the geology, flora and fauna of the area.

The views are spectacular all the way along, but it’s the glass-floored section jutting out from the cliffside which is the main attraction. A sheet of (hopefully very well reinforced) glass is all that separates you from a 280-metre drop, and with glass side panels too you do get the feeling like you’re floating right above the canyon. It’s probably not one to do if you’re scared of heights, but there is a solid-floored section if you’d rather not to see what lies beneath your feet. 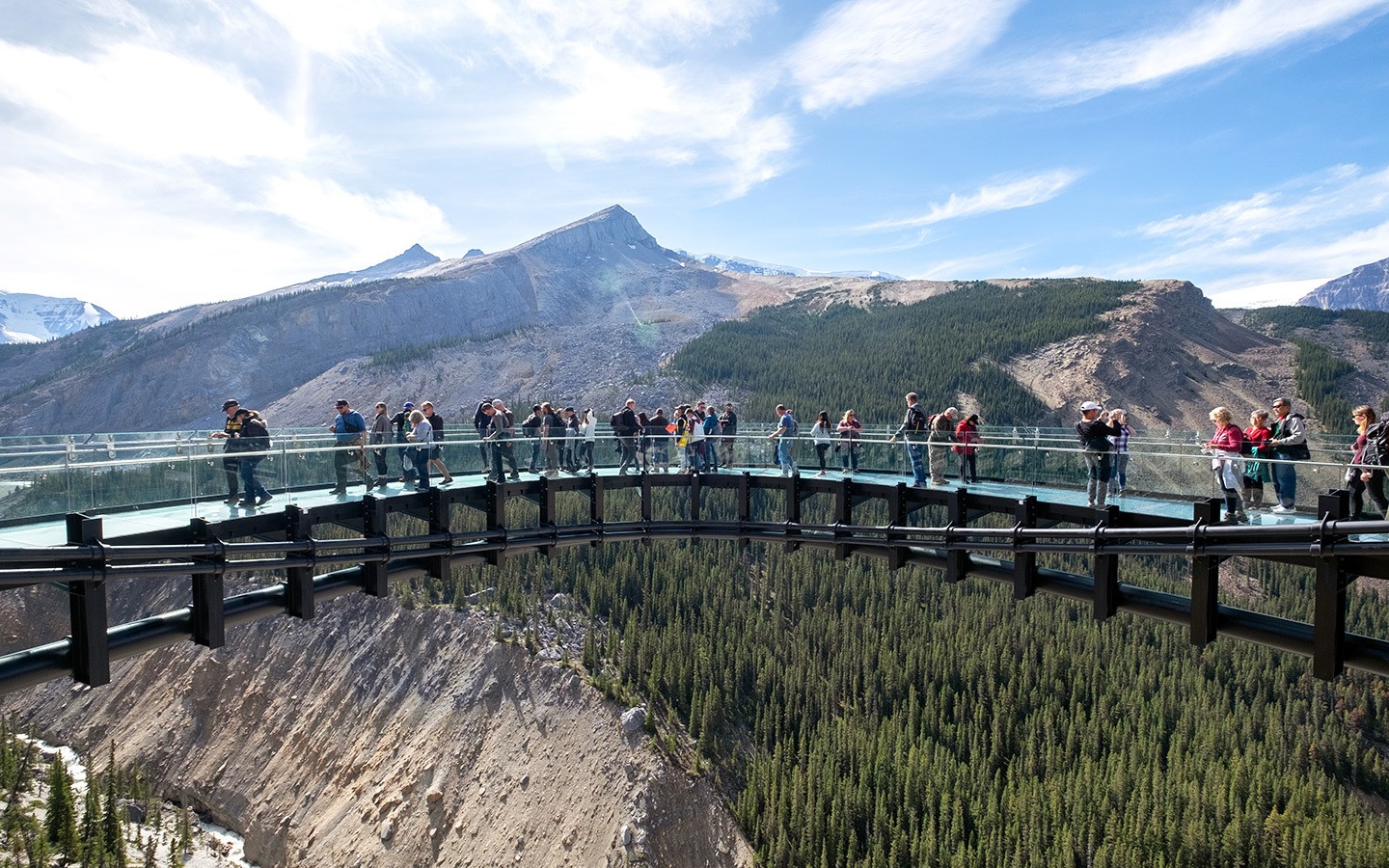 The Columbia Icefields visitors’ centre is located on the Icefields Parkway (aka Highway 93 North) between Jasper and Lake Louise. It’s closed during winter, with tours normally running between April and October. Columbia Icefields tours leave every 15–30 minutes but it can get busy, especially in late mornings, so it’s a good idea to book in advance so you don’t have to queue. There are toilets and a café at the visitors centre but nothing on the tour.

A Columbia Icefield Adventure Admission ticket for the glacier tour and Skywalk (you can’t just do the glacier tour on its own) costs $114 CAD for adults and is free for children 15 and under, or you can save $11 by booking online in advance. The tour takes 2.5–3 hours in total – 30 minutes to reach the glacier, 25 minutes on the ice and 40 minutes to get to the Skywalk, then you can stay there as long as you like and catch the 15-minute shuttle back when you’re ready.

Dress in warm layers as it can be a lot cooler on the glacier than down at the visitor’s centre. It’s not too wet on the ice (though watch out for the meltwater streams) but it’s a good idea to wear waterproof shoes like trainers or walking boots. And bring sunglasses as all that white can get very bright. The Glacier Skywalk is wheelchair accessible and two of the ice explorers have wheelchair lifts, but you do need to give them 72 hours’ advance notice. 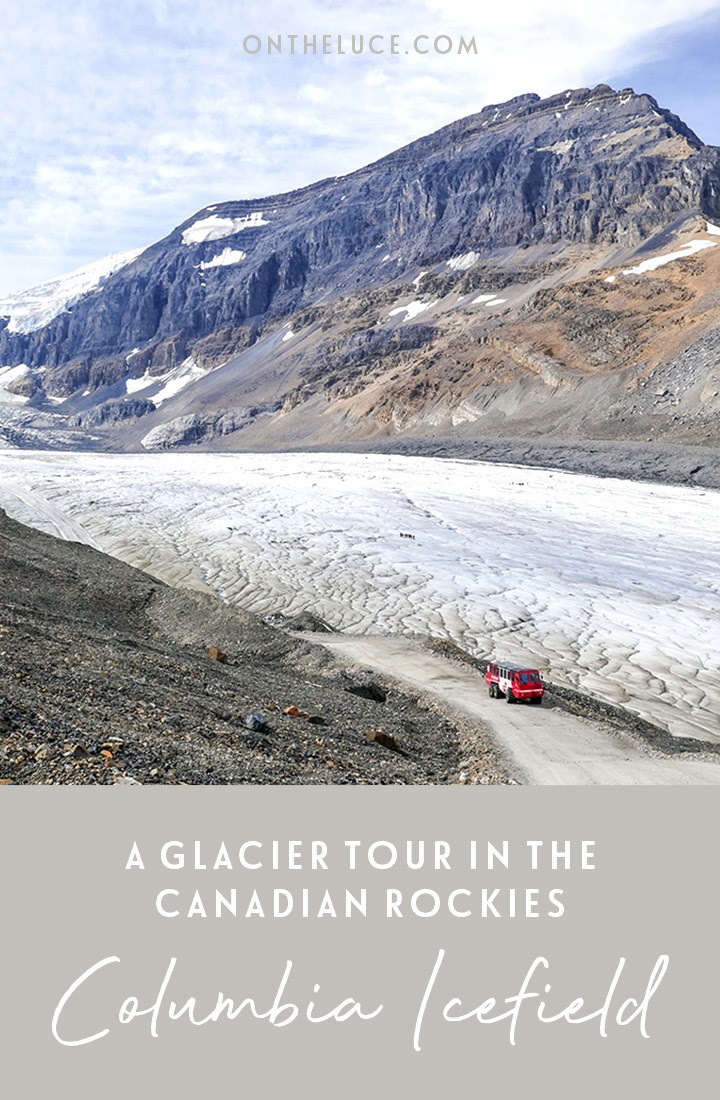 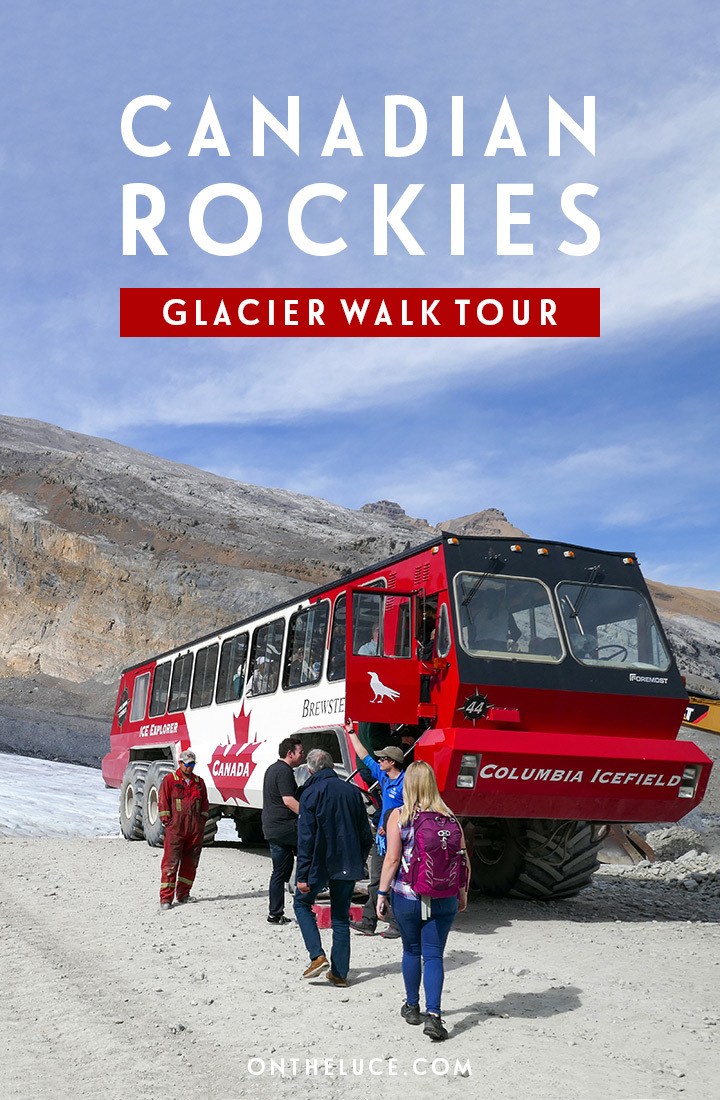 Sounds like a fabulous experience Lucy - not only the glacier and the skywalk but travelling on the Ice Explorer too - despite the hiccup! I hope I get to see it for myself some day.

It's a really interesting experience, and quite something to be able to stand on the surface of a glacier.

Goodness, that does sound disconcerting, to say the least. interesting to see how they coped with it though. Very well from the sound of things. And what an experience stepping out on the glacier, as well as the skywalk, must be. Very envious! So glad the breakdown didn't cause any real problems for you though.

They were very good – no-one panicked at all and we felt in very safe hands. Did make it a memorable visit though!

Oooh I stopped off here but didn't do the full experience and now I'm kinda glad I didn't yet jealous of your tour at the same time!

It was great fun – even the breakdown!