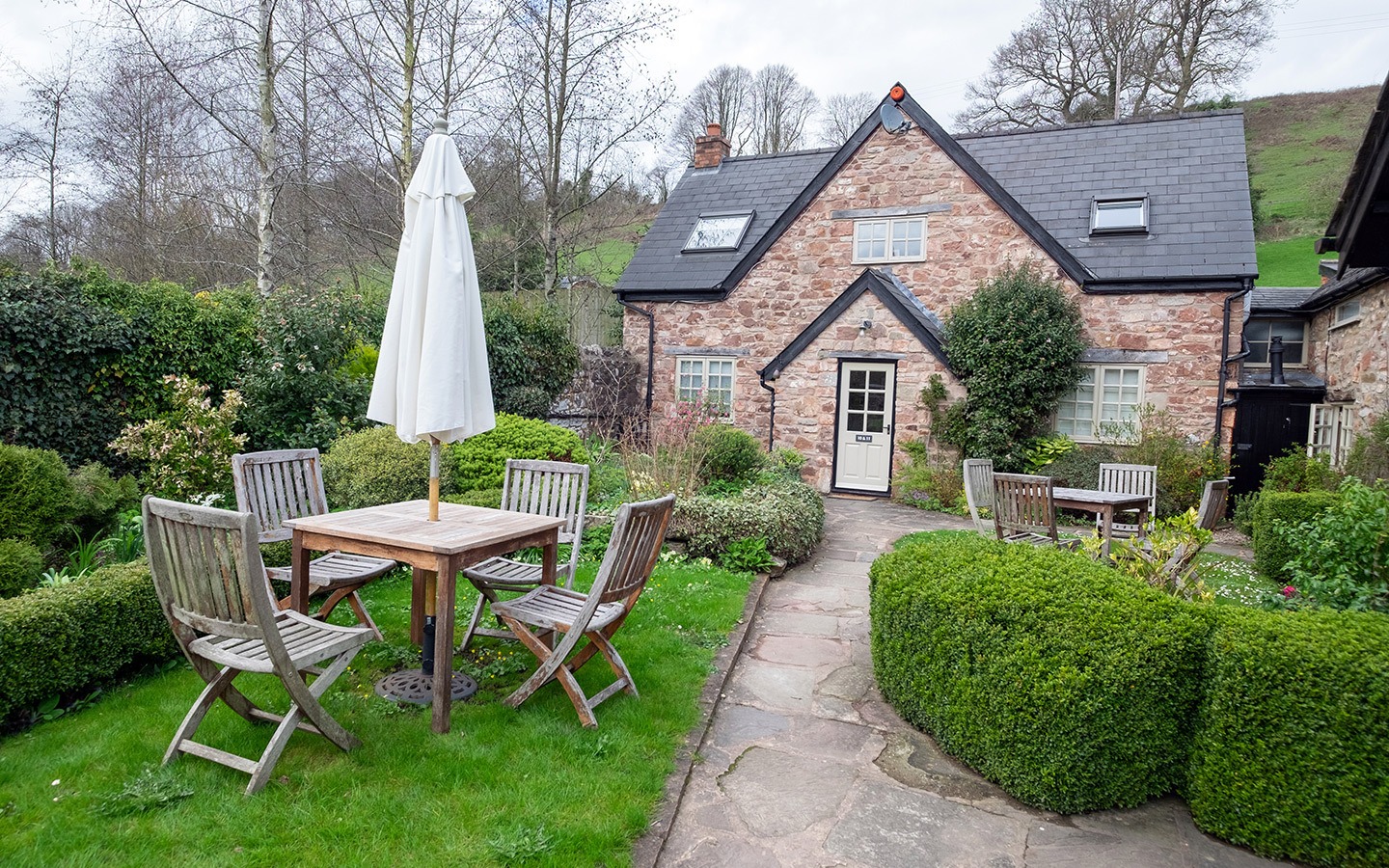 The Forest of Dean was a big part of my childhood. I grew up not far away in Ross-on-Wye and spent so many weekends in the Forest – walking the Sculpture Trail, cycling the old railway line, splashing around in Cannop Ponds, clambering through the trees at Puzzlewood. But as I got older my travels started taking me further afield and I haven’t been back to most of those old favourites in years. The Forest of Dean is still in my blood though – literally as my mum was born there and my grandad was a Forest miner. So when I was invited by the Tudor Farmhouse – a former farm turned boutique hotel in Clearwell – to try their Forest Awakens package, it was well-overdue chance to rediscover the magic of the Forest of Dean. 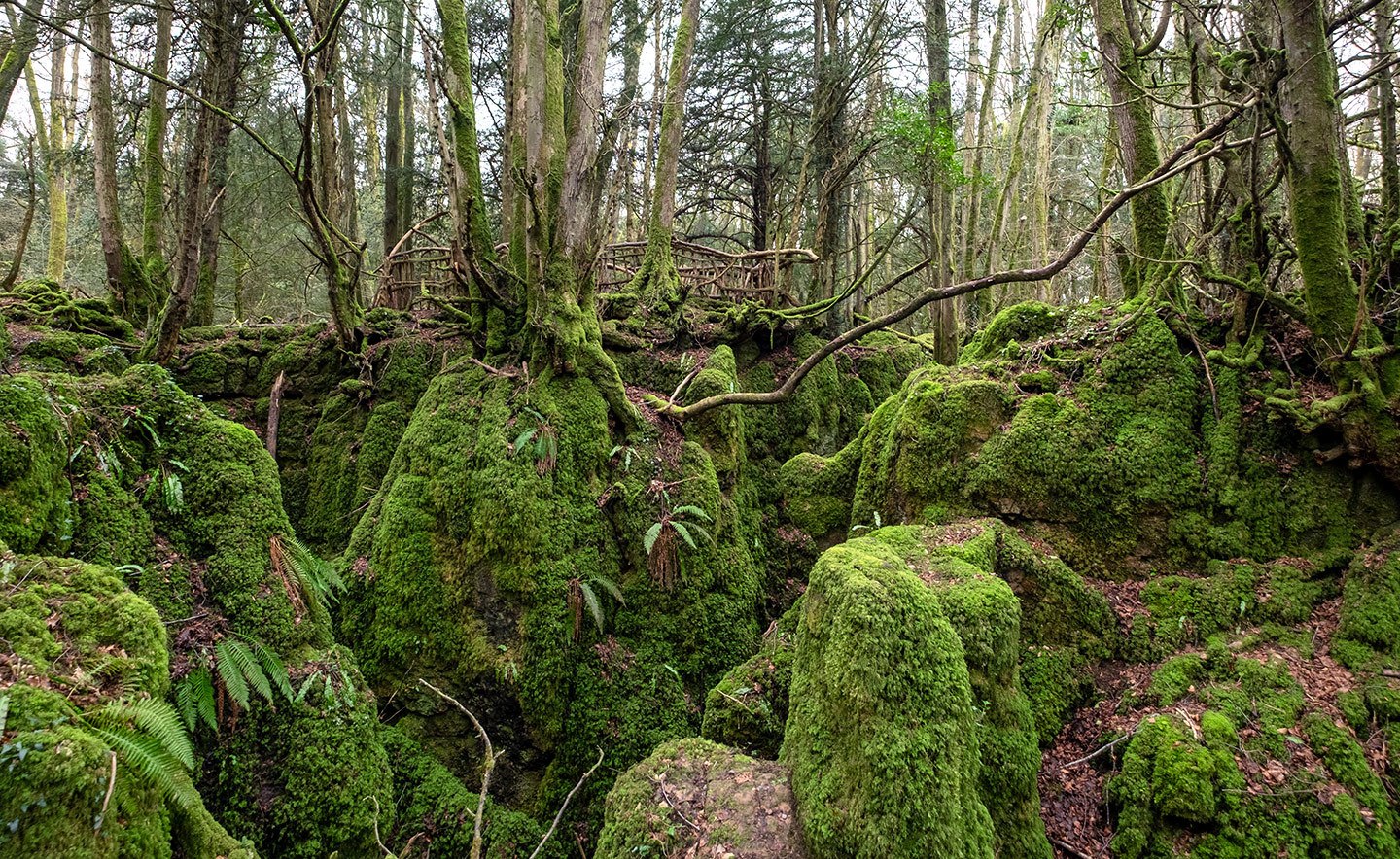 The Tudor Farmhouse is set in the traditional village of Clearwell, where the Forest of Dean meets the Wye Valley. It’s best known for its caves and castle, but the Farmhouse is now putting it on the map as a destination for food lovers and city dwellers looking for a peaceful countryside escape. I took my mum along with me for a mini adventure close to home to see how they’re bringing luxury to the Forest. 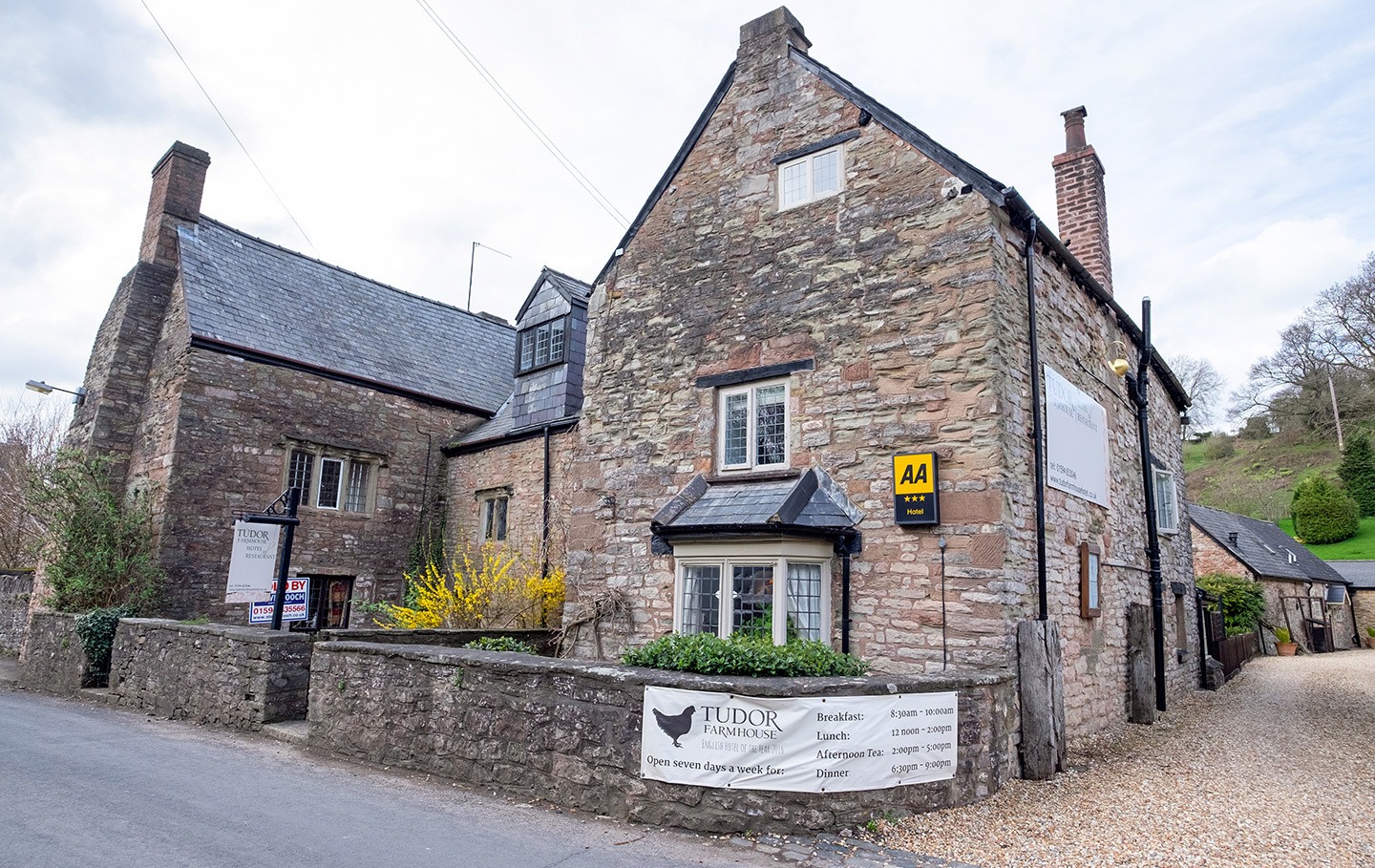 As you’d expect from the name, the Farmhouse was a working farm for years then had a stint as a B&B before current owners Hari and Colin Fell took it over in 2003. It’s classic Forest of Dean style, with stone buildings set around a central courtyard garden, surrounded by 14 acres of grassland with a kitchen garden and resident chickens and ducks as neighbours. The original farm buildings and barns have all been converted over the years, so each is different, with the oldest section dating back to the 16th century. 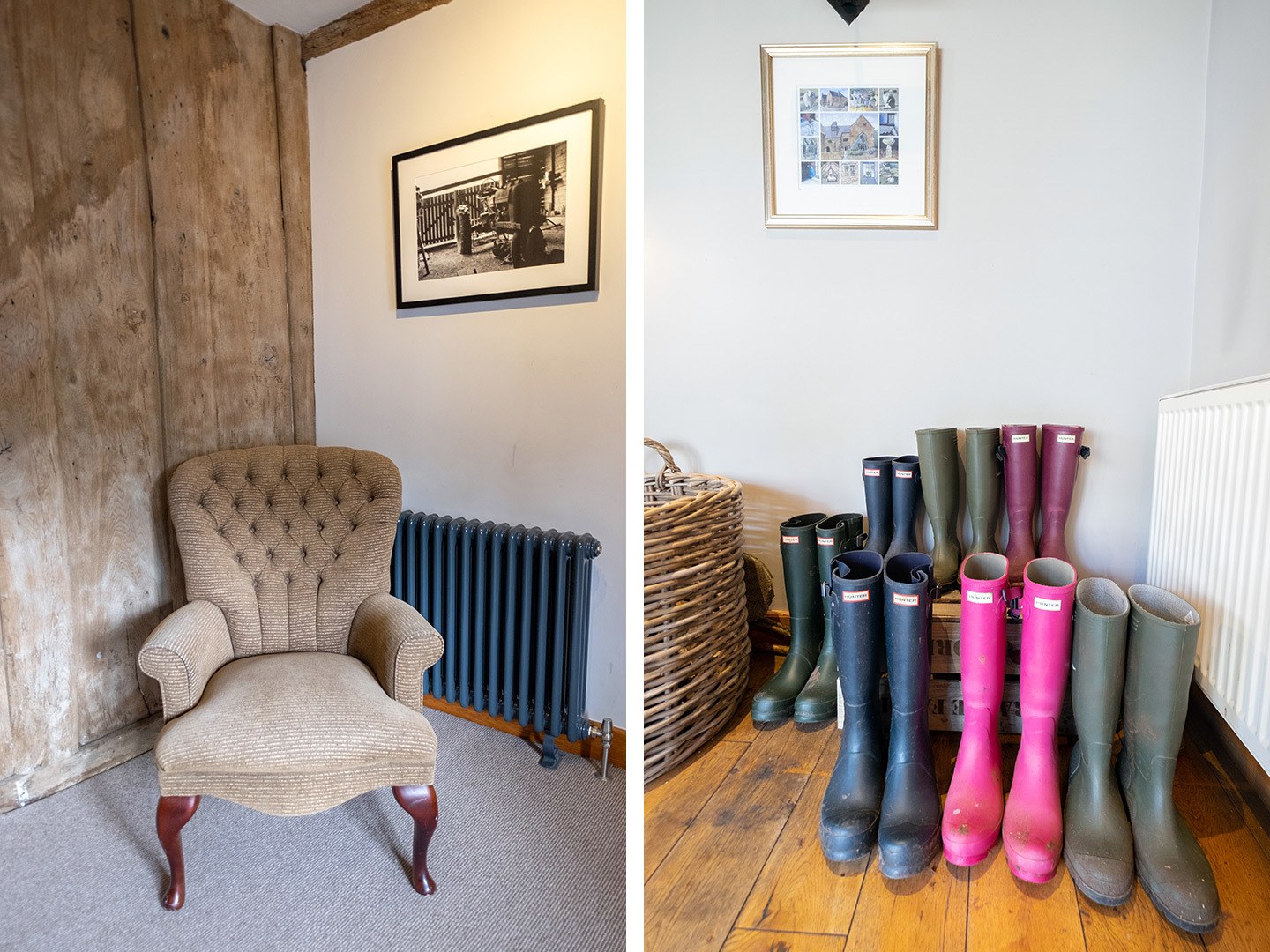 Details at the Farmhouse

We left the spring chill behind as we came into the lobby and reception – those thick stone walls help keep things nice and warm however cold it is inside. The exterior might look like a traditional farmhouse but inside it mixes up original features with a contemporary look that’s more smart sophistication than countryside chintz. There are lots of touches of character, from vintage farming photos on the walls to a row of colourful Hunter wellies guests can borrow if the weather isn’t behaving. As well as the lobby, there are two dining rooms, a light-filled conservatory and cosy lounge with open fireplace downstairs. 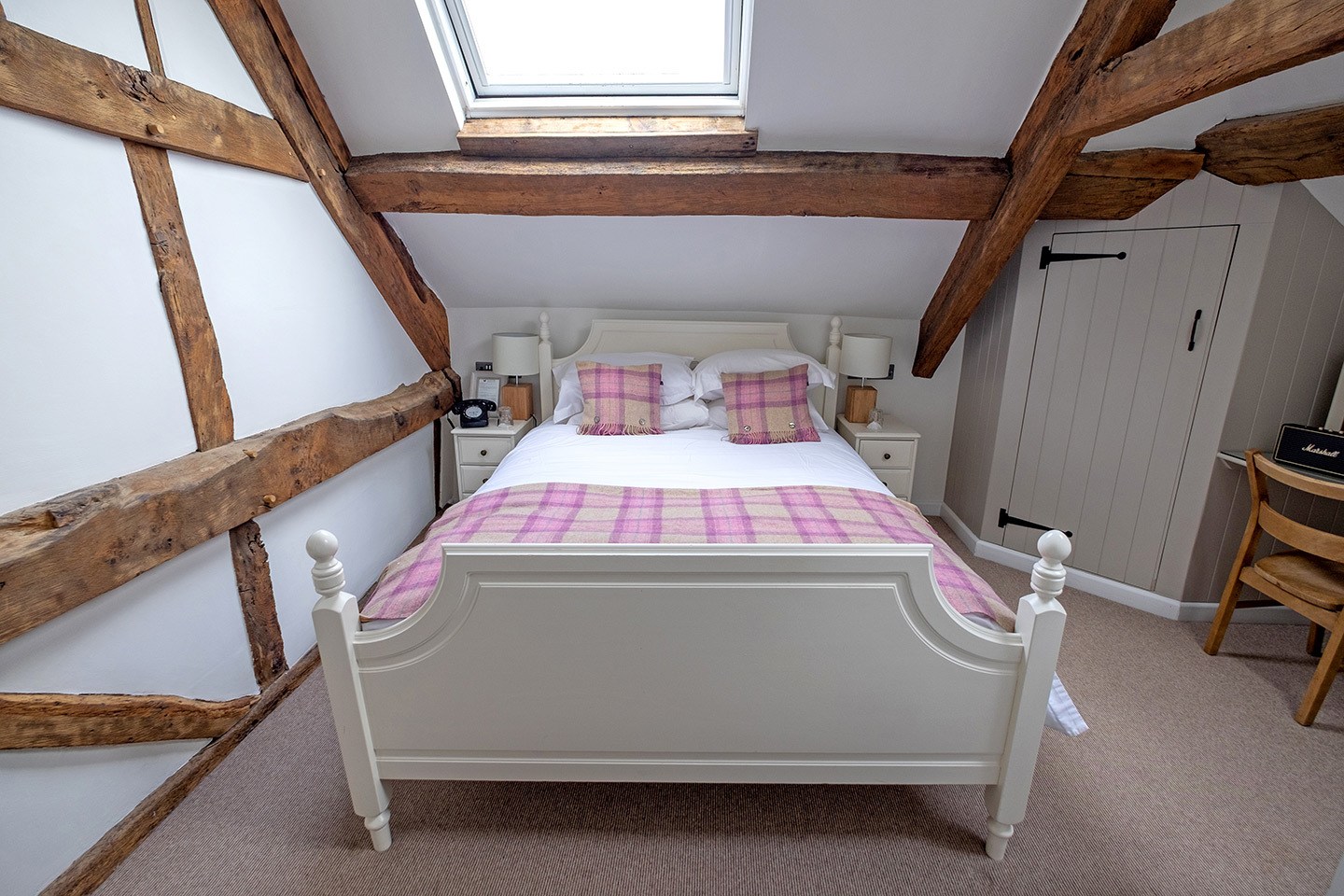 Our bed in The Roost

The hotel’s 20 bedrooms are spread across the different buildings so no two are the same, and they range from the smallest ‘Hatchling’ rooms to large suites. Our home for the night was The Roost suite, up in the roof of the original farmhouse. Getting there was part of the adventure, climbing up an original Tudor staircase (a bit of a challenge after a few G&Ts in the bar downstairs). Through the door was a big, bright space, mixing skylights and original wooden beams, calming Farrow and Ball paint colours with splashes of bright pink, with a comfy bed and separate seating area. But the real wow factor came from the bathroom, a huge space with walk-in shower, underfloor heating and a roll-top bath you could almost dive into. 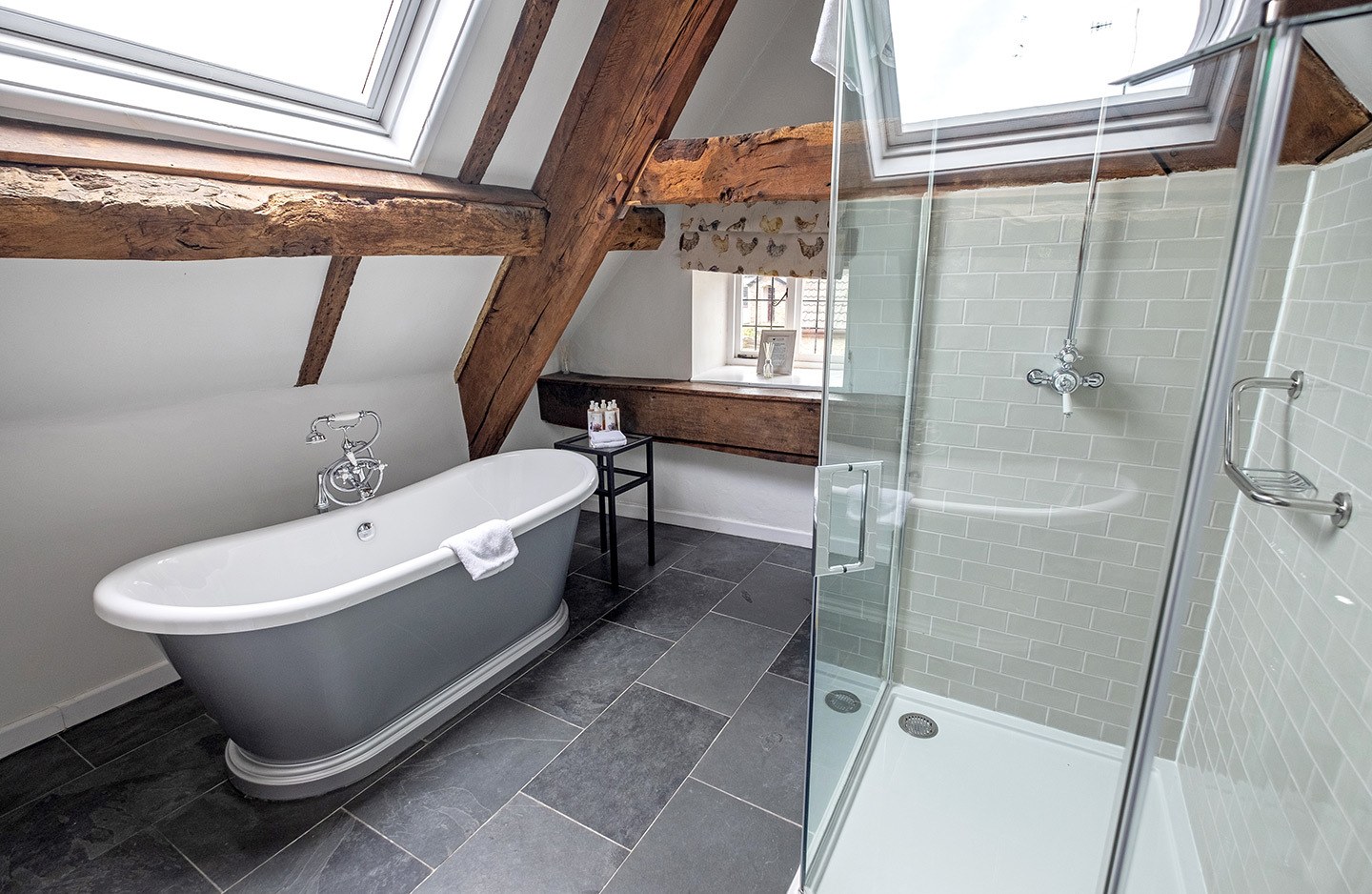 Food is at the heart of the Tudor Farmhouse, and it’s not your usual hotel restaurant or country pub grub either. The hotel’s been awarded two AA rosettes and head Chef Rob Cox focuses on fresh, organic and free range local produce. As much as possible is sourced from within 20 miles and some is much closer, with eggs from the hens outside, vegetables from the kitchen garden and herbs gathered by their in-house forager. The menu shows you where everything comes from, right down to which farm. And there’s an amazing range of produce available locally, from rare-breed meat in Chepstow to wine from Tintern Parva. 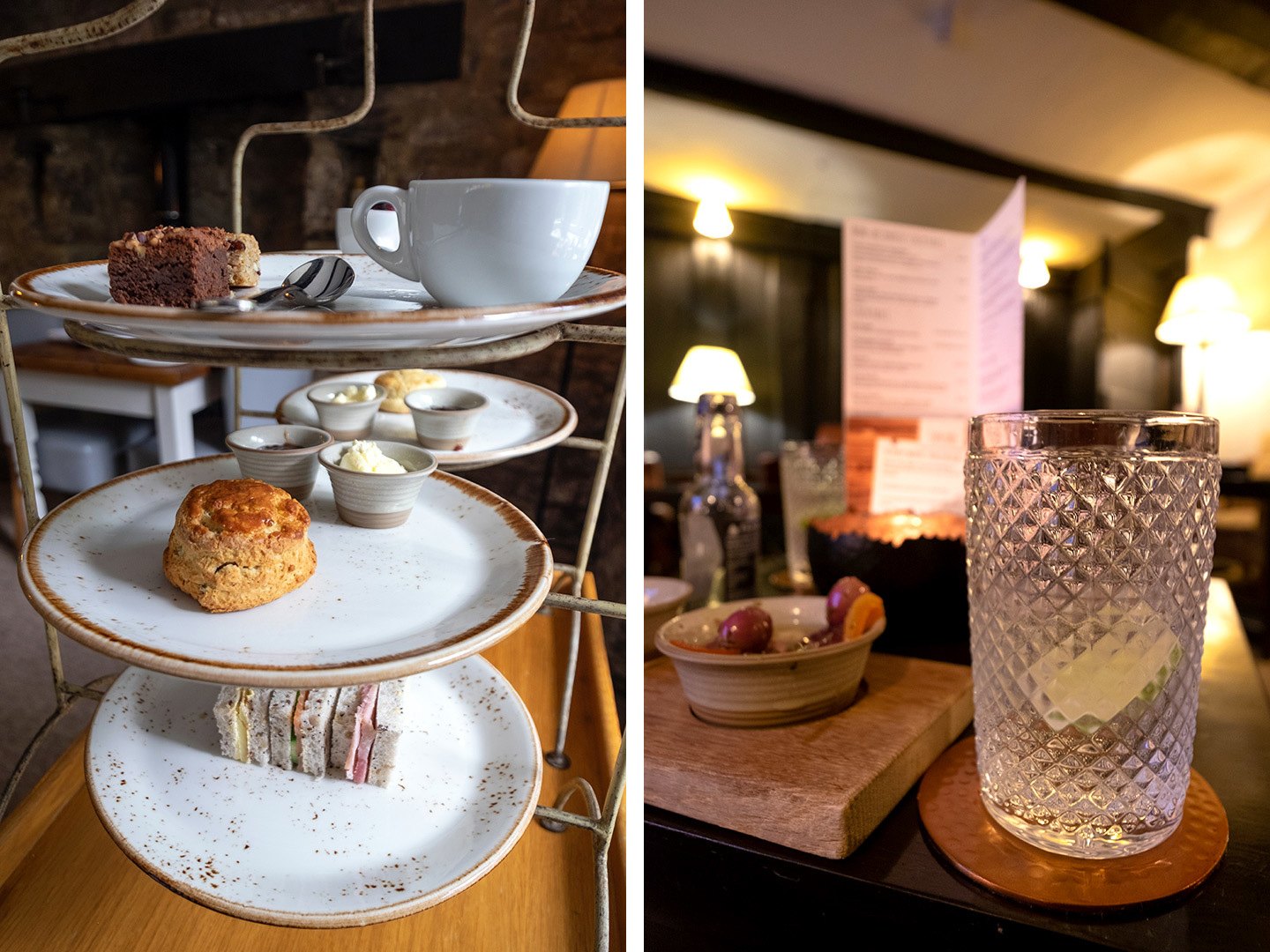 For dinner – open to anyone not just guests at the hotel – you can choose from a special seasonal six-course tasting menu or an à la carte menu. After already stuffing ourselves with afternoon tea earlier on we stuck to the three-course option. It was one of those meals to really savour, with every course beautifully presented and each ingredient a star. I started with Wye Valley asparagus with morels and a truffled egg yolk. Next up was pan-fried cod with a hazelnut and truffle pesto. And finally I finished off with a lemon parfait with forced rhubarb and rhubarb sorbet. At least we didn’t have too far to go to stagger to bed. 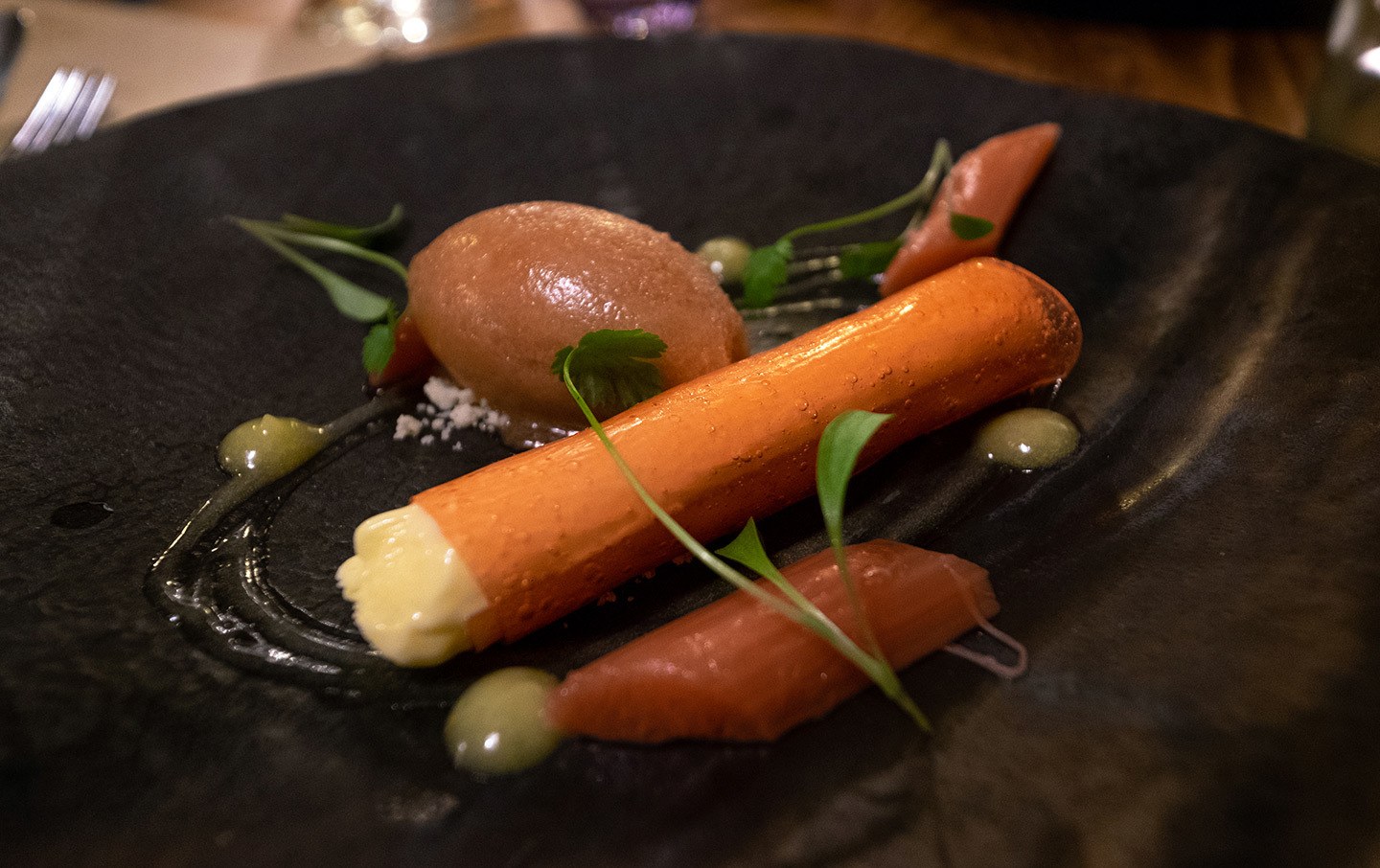 My lemon parfait and rhubarb dessert

Exploring the Forest of Dean

Tempting as it was to stay curled up inside our cosy room, we were there to explore the Forest too. The Farmhouse can arrange all sorts of activities in the local area, from visits to breweries and vineyards to wild swimming, cycling and foraging expeditions. But the focus of our Forest Awakens package was on walking, so we strapped on our boots and headed outside. In the lobby there are a stack of leaflets with local walking routes mapped out, but we were short on time so we made up our own circuit through Clearwell, past the castle (now a private – and eye-wateringly expensive – wedding venue) and out towards Newland. Just a few minutes from the hotel and we were out in open fields, with just a couple of donkeys for company. 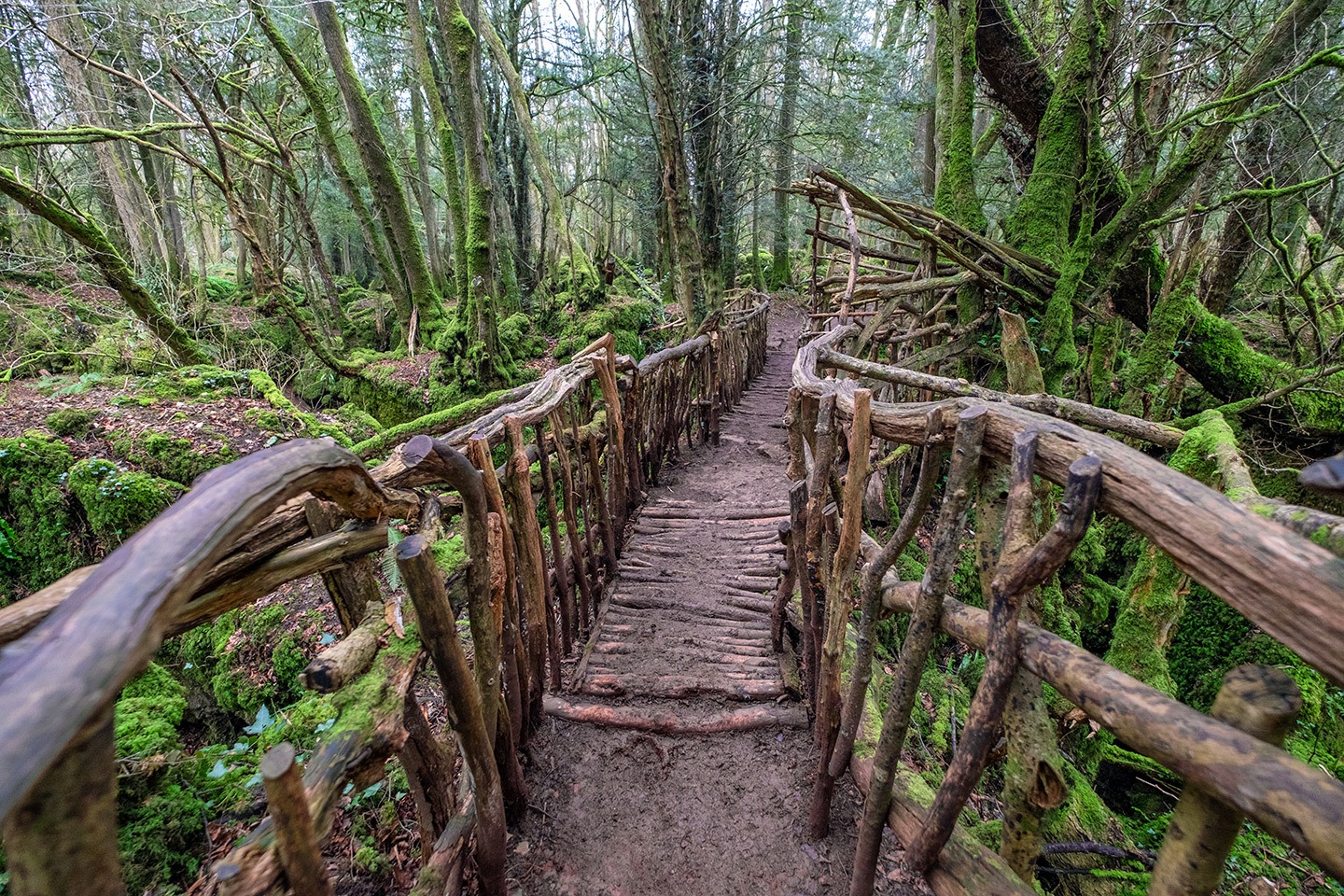 The next morning we headed just a bit further afield to Puzzlewood – one of my childhood favourites. This magical ancient forest is like something straight out of the pages of a fairytale. I’m not the only one who thinks so either, it’s been featured in a whole host of films and TV series, from Star Wars to Merlin and Doctor Who. It’s even said to have been JRR Tolkien’s inspiration for Middle Earth in the Lord of the Rings. It’s a real maze of a place, with unusual geological formations called scowles creating mini gorges and hidden caves, all covered in gnarled old tree roots and layers of bright green ferns and moss. Even the bridges, paths and handrails are made of twisted old branches so it feels like the forest has taken over. 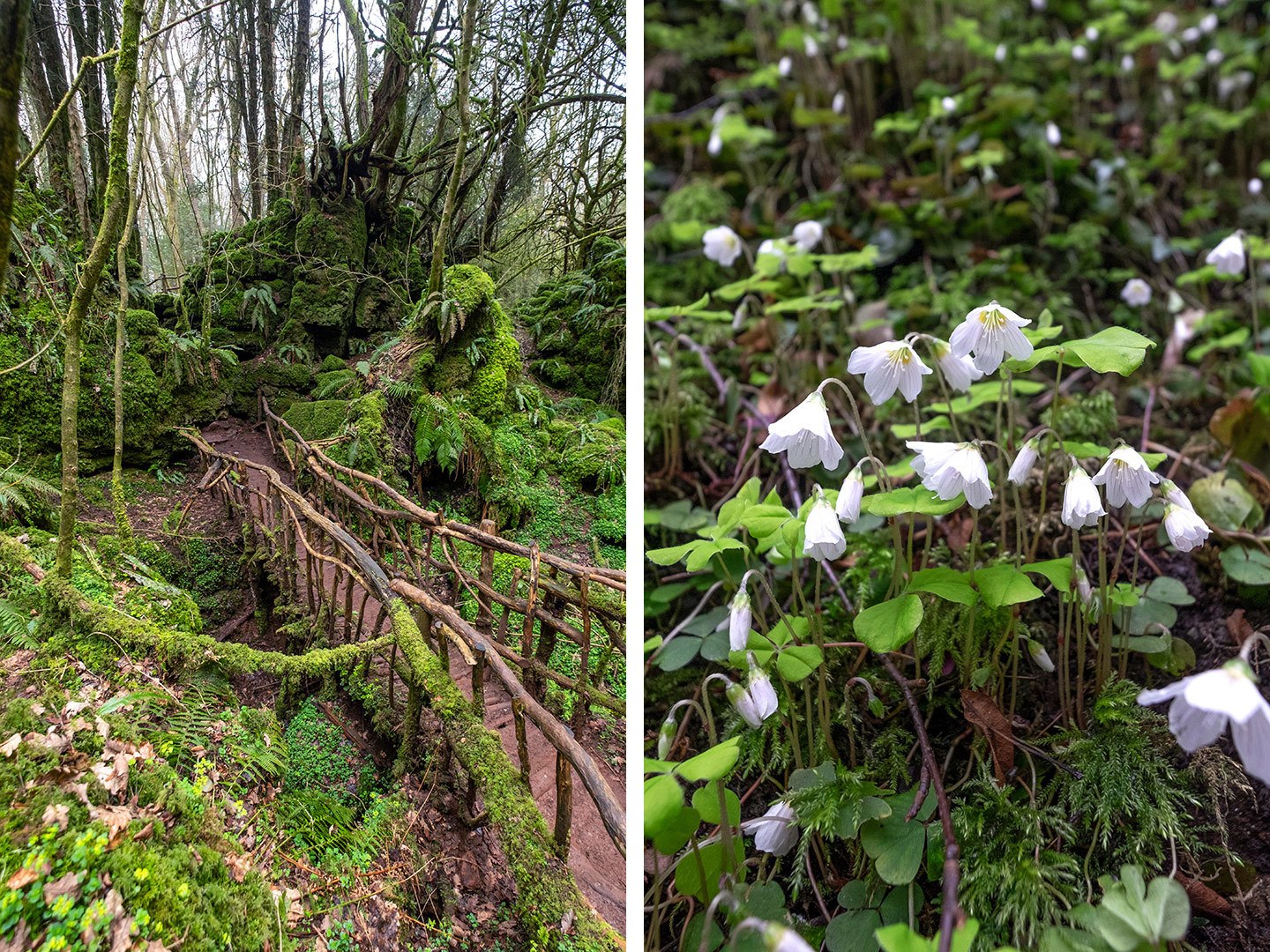 As well as Puzzlewood, there are lots of other places to visit near the Tudor Farmhouse. Closest is Clearwell Caves, a natural cave system which was mined for ochre and iron ore for over 4500 years. Now you can head underground and learn about its mining history – or try caving if you’re feeling brave. There’s also the Perrygrove Railway, a miniature steam railway which does a 30-minute forest circuit. And of course there are all my old favourites like the Dean Heritage Centre, the Sculpture Trail and Symond’s Yat. Taking this trip reminded me how lucky I was – and am again – to have all this so close to home. And hopefully the Tudor Farmhouse will introduce even more people to the magic of the Forest of Dean in style. 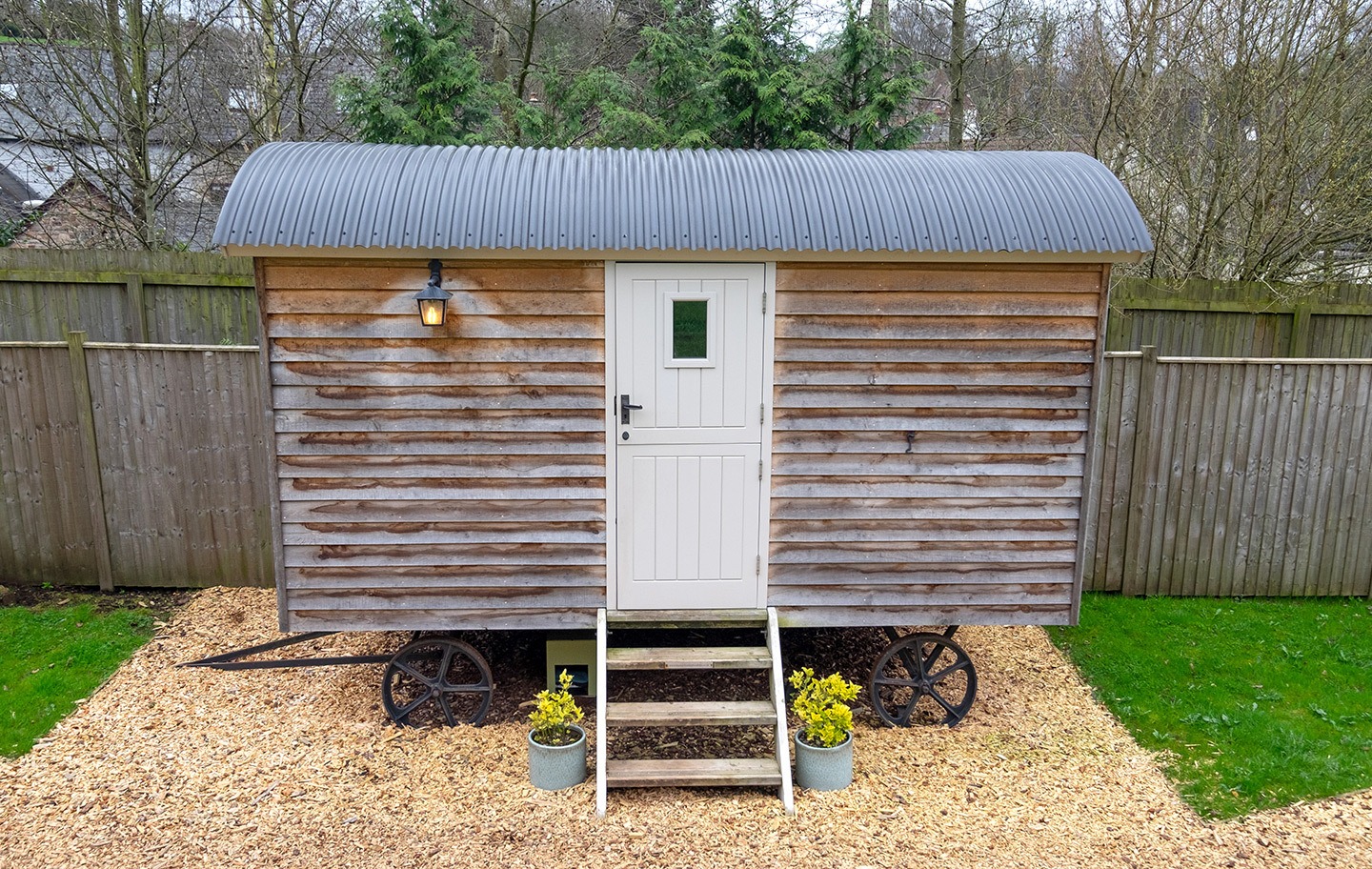 Shepherd’s Hut in the Farmhouse’s gardens

The Tudor Farmhouse is located in Clearwell in the Forest of Dean, around 12 miles south of Ross-on-Wye and 11 miles north of Chepstow. It’s easiest to get around the Forest by car, but there are train stations fairly close by at Chepstow and Lydney, with connections through Cardiff and Gloucester.

Rooms at the Tudor Farmhouse start from £130 per room per night B&B for a Hatchling room up to £220 a night in our suite The Roost. The Forest Awakens package starts from £490 for a two-night stay for two including dinner, bed and breakfast each day, a packed lunch for two and a local walking guidebook. It’s available until the end of May but there are lots of other special packages throughout the year too. 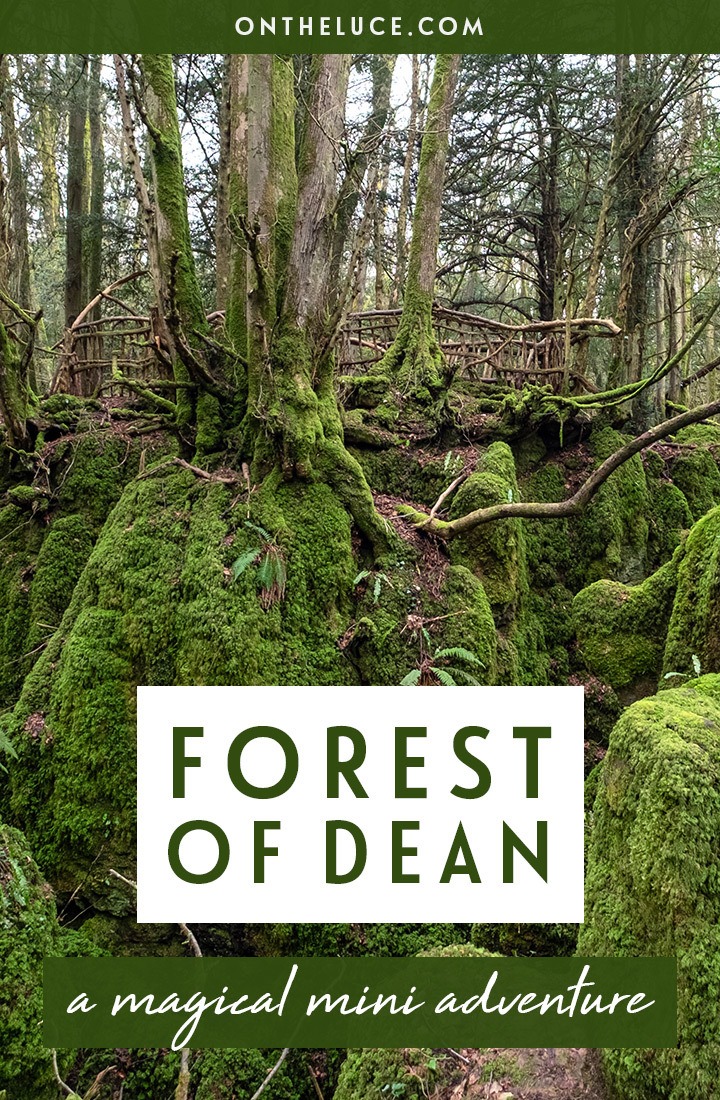 Thanks to the Tudor Farmhouse for hosting us. All views and opinions are, as always, my own.

The place looks so magical and beautiful! Straight from a fairy tale.

It does feel just like walking into the pages of a Grimm storybook!

I'm in love with Puzzlewood! Forest of Dean has long been on my travel wishlist and this has definitely pushed it closer to the top.

Puzzlewood is so magical – I'm going to have to get back there more often now I've rediscovered it!

I think i know where i am going for my next vacation. Amazing place & i must say the pictures are breathtaking.

Thanks, great to hear!

I've never heard of Puzzlewood! These trees look out of this world! The Tudor Farmhouse is so lovely! Can´t wait to visit one day - thanks for the inspiration, pinned ;-)

That's great! Puzzlewood is such a magical spot – and Tudor Farmhouse makes it extra special.

I simply have to visit (and photograph) Puzzlewood. Pure magic! But it all sounds wonderful. Steam trains, wild swimming, and the farm - all spot on. I have to admit I wasn't sure exactly where it is so looked it up. It would tie in beautifully with a return visit to Bristol where I went to uni. A plan is hatching!

That sounds like an excellent plan! The Forest of Dean is a bit under the radar still but it definitely deserves to be better known (though it was so nice to see Puzzlewood without lots of people there).