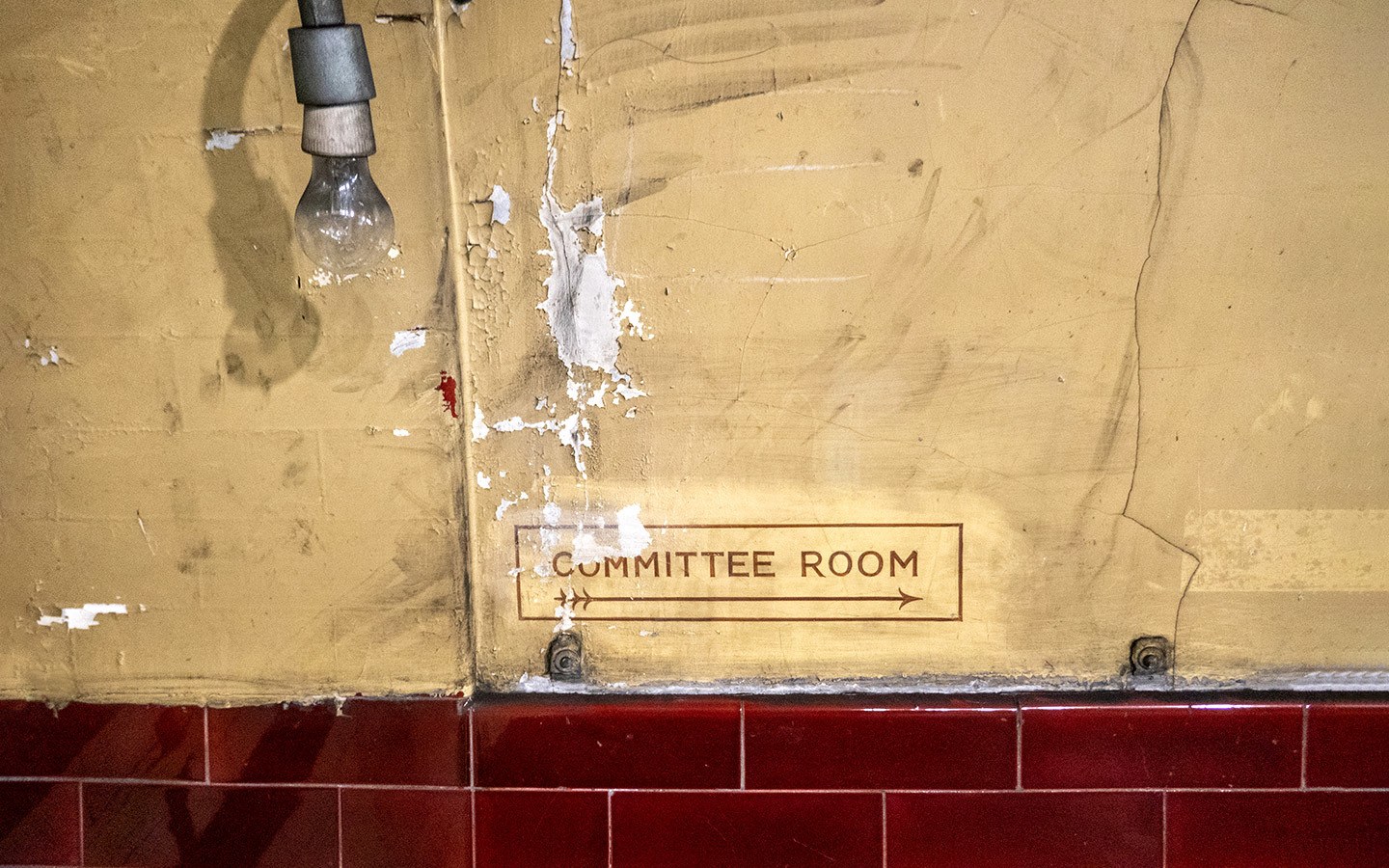 Beneath the streets of London is a hidden underground world of abandoned Tube stations and deserted tunnels, each with their own story to tell. Most of them are locked away and inaccessible, but a series of Hidden London tours run by the London Transport Museum gives you access to this secret underground world. Their mix of history, architecture and the chance to get beyond the barriers makes them one of my favourite alternative things to do in London – so I headed underground for the third time to Mayfair’s Down Street, a station whose wartime history and connection to Winston Churchill make it one of the most fascinating.

My visit was hosted by the London Transport Museum, but all views are my own. 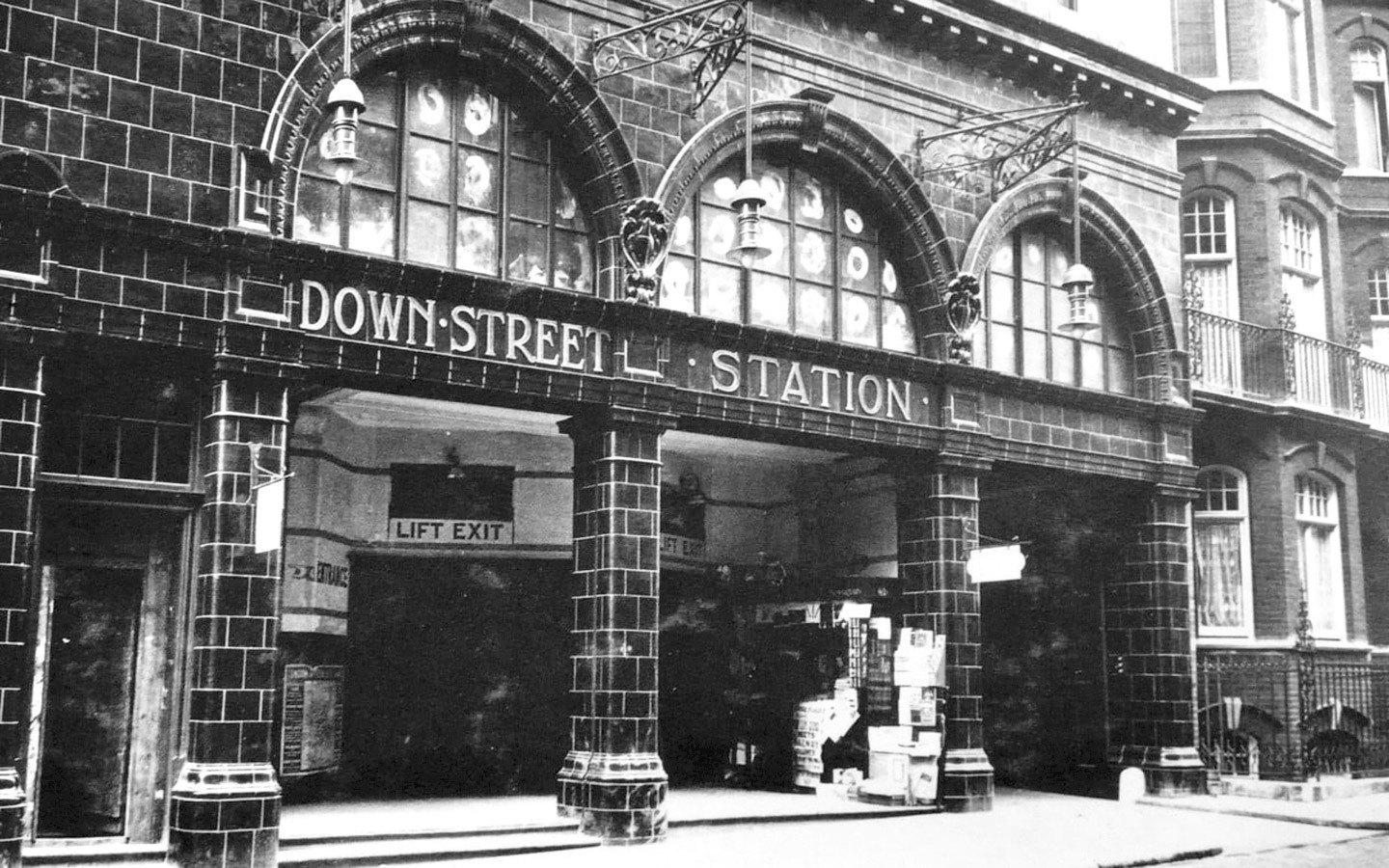 The history of Down Street Tube station

Down Street opened in March 1907 as part of the new Great Northern, Piccadilly and Brompton Railway (now on the Piccadilly line). Land disputes and layout issues meant it opened late, and it never really caught up. It was too close to other stations and trains didn’t always stop. And being hidden away down a side road off Piccadilly didn’t help – surrounded by rich local residents who had their own transport and didn’t want Tube signs spoiling the neighbourhood.

With nearby Green Park and Hyde Park Corner stations being enlarged for escalators to be built and the Piccadilly line extension in 1929 putting the pressure on to close quieter stations, Down Street’s time was up. It finally closed in May 1932, destined to spend the rest of its days as a ventilation shaft for the Piccadilly Line. Well at least until the Second World War broke out, when it got a new life as the secret headquarters of the Rail Executive Committee (REC). 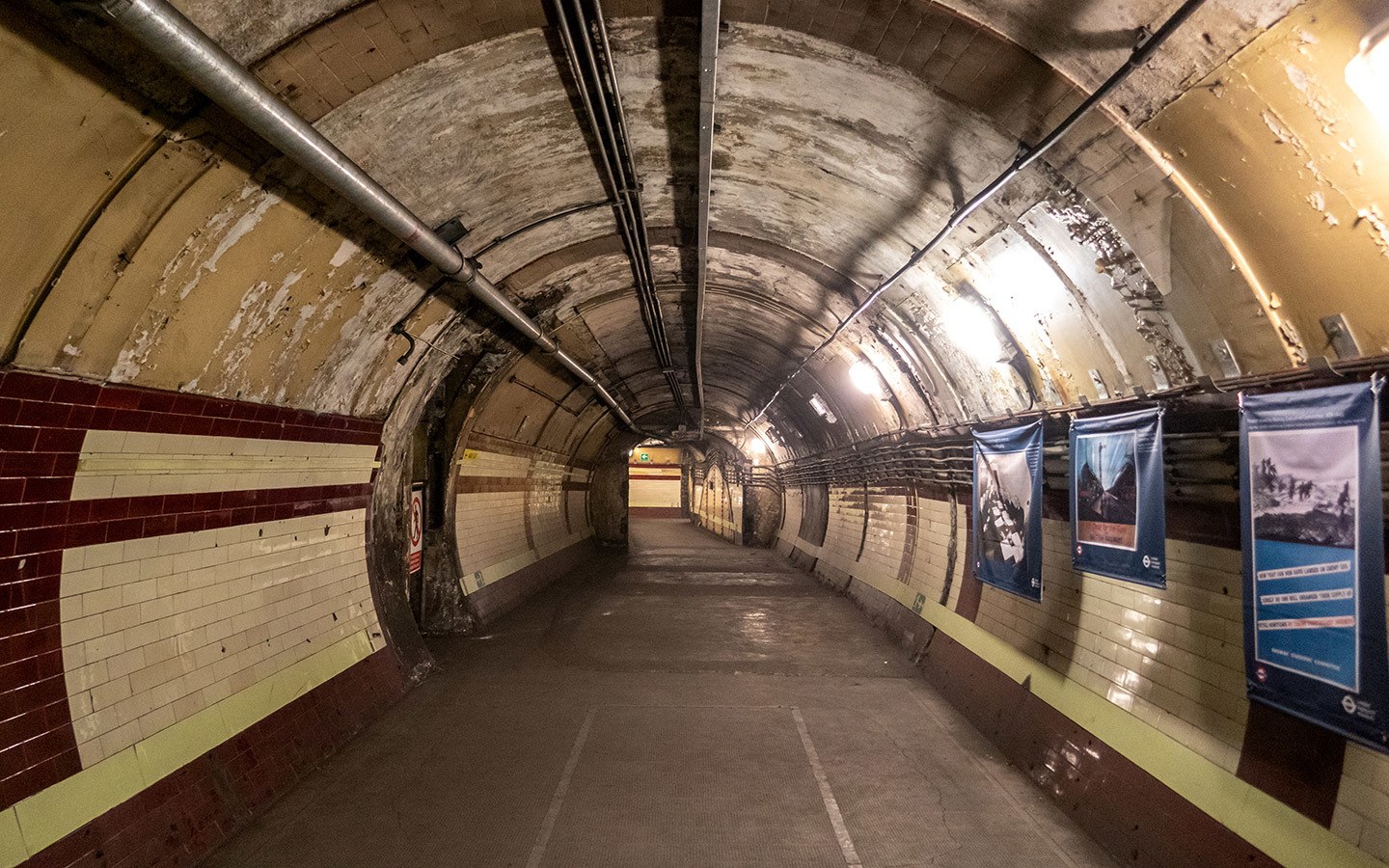 The REC controlled Britain’s railways during the war – making sure people, weapons and supplies were where they needed to be. Made up of representatives of the four mainline railway companies plus the London’s transport board, they needed a wartime HQ that was bombproof, had a central London location and was big enough to house an underground telephone exchange. Enter Down Street, whose deep tunnels and Mayfair location made it perfect.

So in 1939 the tunnels got a makeover – converted into a network of offices and meeting rooms, with living accommodation for up to 40 staff. Bombproof, gas-proof and hidden away from prying eyes, it was seen as the safest place during the Blitz so was used by Winston Churchill as a shelter until the Cabinet War Rooms were ready (the off-ration supplies of caviar, Champagne and cigars might have helped). Once the war was over the tunnels were cleared and abandoned. So what’s left of Down Street now? I took a trip back in time to find out its secrets. 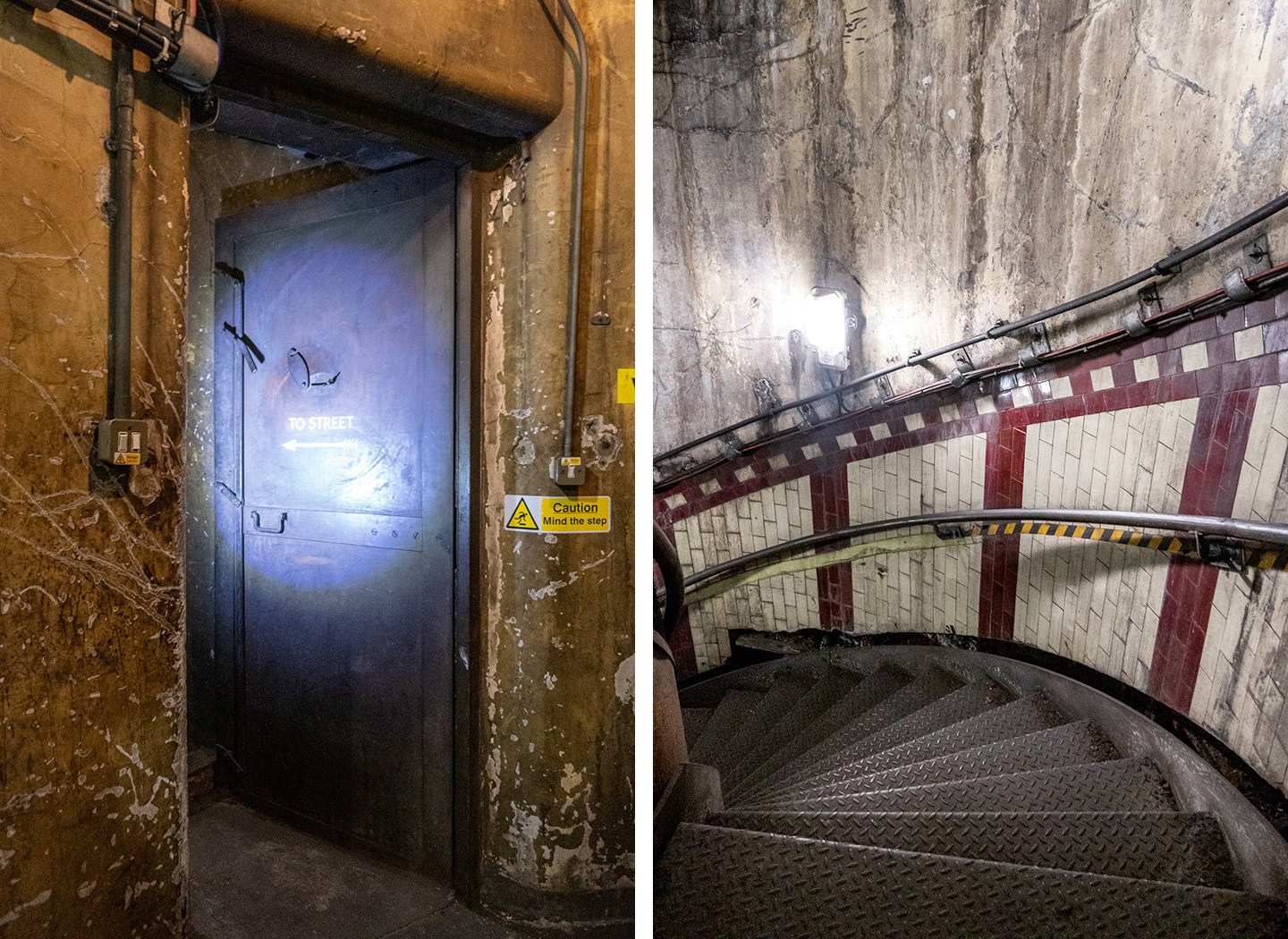 Our Down Street Tube tour started in an office building tucked down a side street in Mayfair, where we were kitted out with torches and given a safety briefing before heading to the station entrance. What was the ticket office is now the Mayfair mini-market, but if you look up it still has that distinctive Tube station look, with its arches and oxblood red tiles marking it out as one of the 50 stations designed by Leslie Green in his distinctive Arts and Crafts style.

A thick metal door takes you inside, where you can see traces of the different phases in its history all around you. There’s the original tiling from its days as a Tube station, the wartime signs and peeling yellow painted walls which were used to mark the public spaces, and the modern notices in case it’s needed as an emergency exit from the Piccadilly Line. 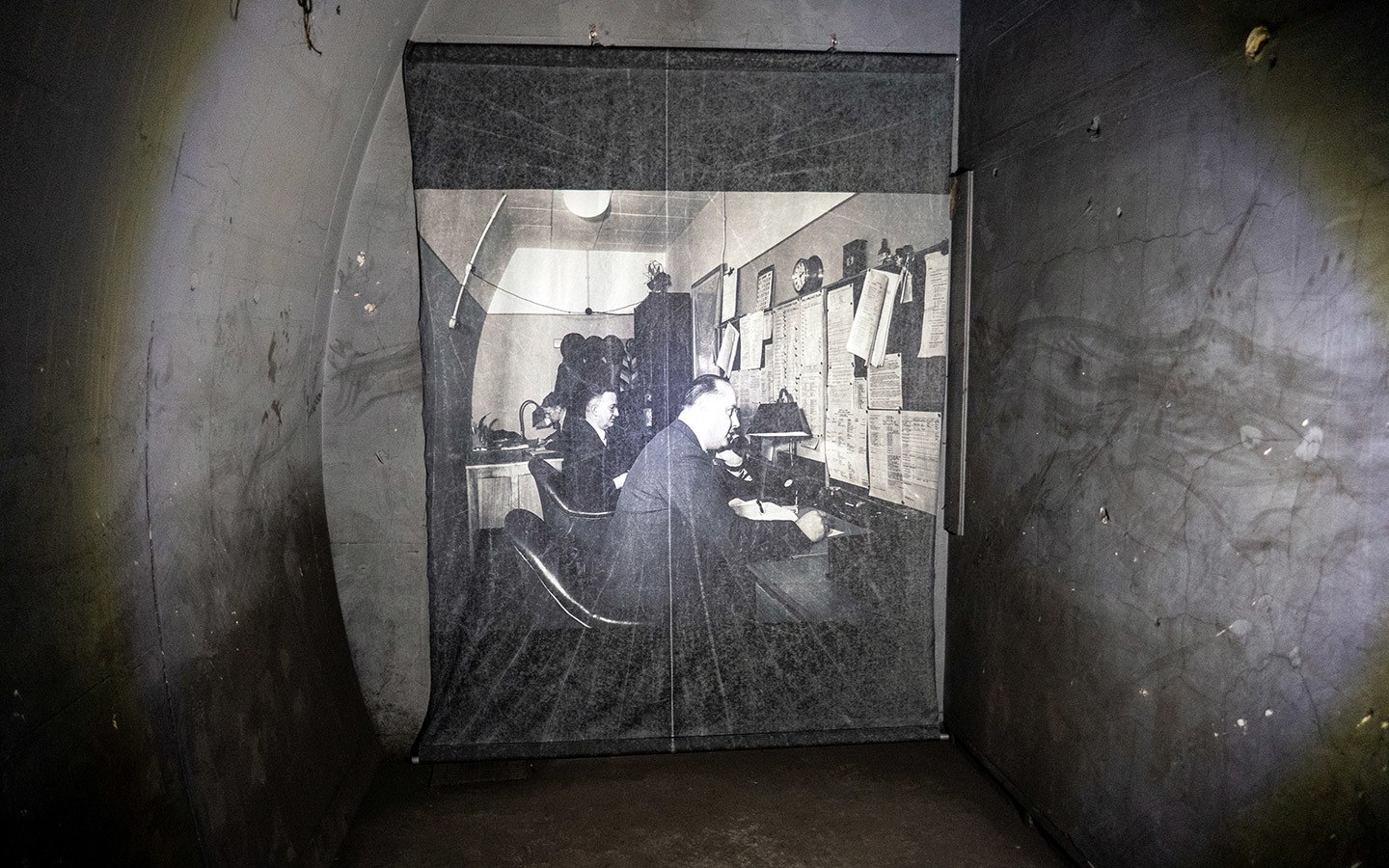 The lifts built for the REC have long since been removed, so we headed down 122 spiral stairs to reach the main tunnel. Almost everything was stripped out at the end of the war, turning the tunnels back into ventilation shafts, but photos and documentary records have been used to piece together how the space was used. And as we walked through the different sections, squeezing our way through tight spaces into different rooms, there were echos of what it must have been like living and working underground while London battled the Blitz.

Ghosts of its past life still remain – snipped off wires hanging from ceilings, shadows where clocks hung on the walls, marks where gas-proof doors once stood, an old tin bath in a tiny partitioned bathroom, fat-stained kitchen walls where chefs would cook up off-ration steak, the button REC executives would press to summon more Champagne in the dining room. And the one thing still there in its entirety is the telephone exchange – clearly getting that back out was a bit too much of a challenge, so it sits in a corner, layered with 70 years of grime. 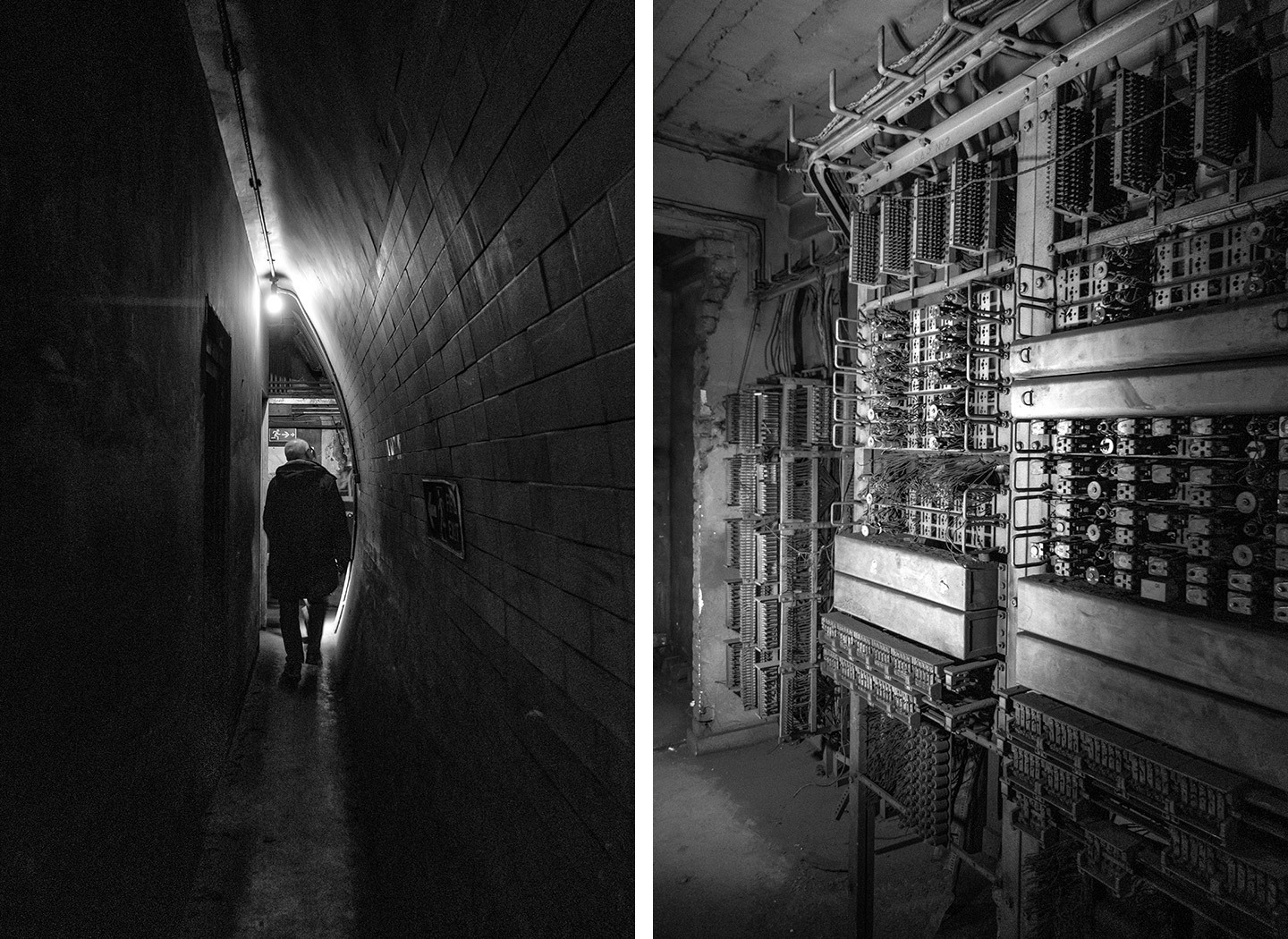 Every tiny bit of space was made use of. When the station was converted in 1939, the tunnels were kitted out by railway carriage fitters – guided by REC secretary Gerald Cole Deacon, whose sailing experience came in handy when it came to getting the most out of the space. As well as meeting rooms, offices, a typing pool and telephone exchange, dormitories, bathroom,  kitchens and dining rooms made it into a self-contained underground settlement.

No one knew that Down Street was there, so staff would work and sleep in shifts so they didn’t draw attention to the site by coming and going. And being down there it’s amazing to think that up to 40 people lived and worked in these tunnels at a time, packed into such tiny spaces – connected by corridors just wide enough to get a tea trolley down. It was cramped, dark, stuffy and most of all noisy, with trains running day and night. And they still run right past. 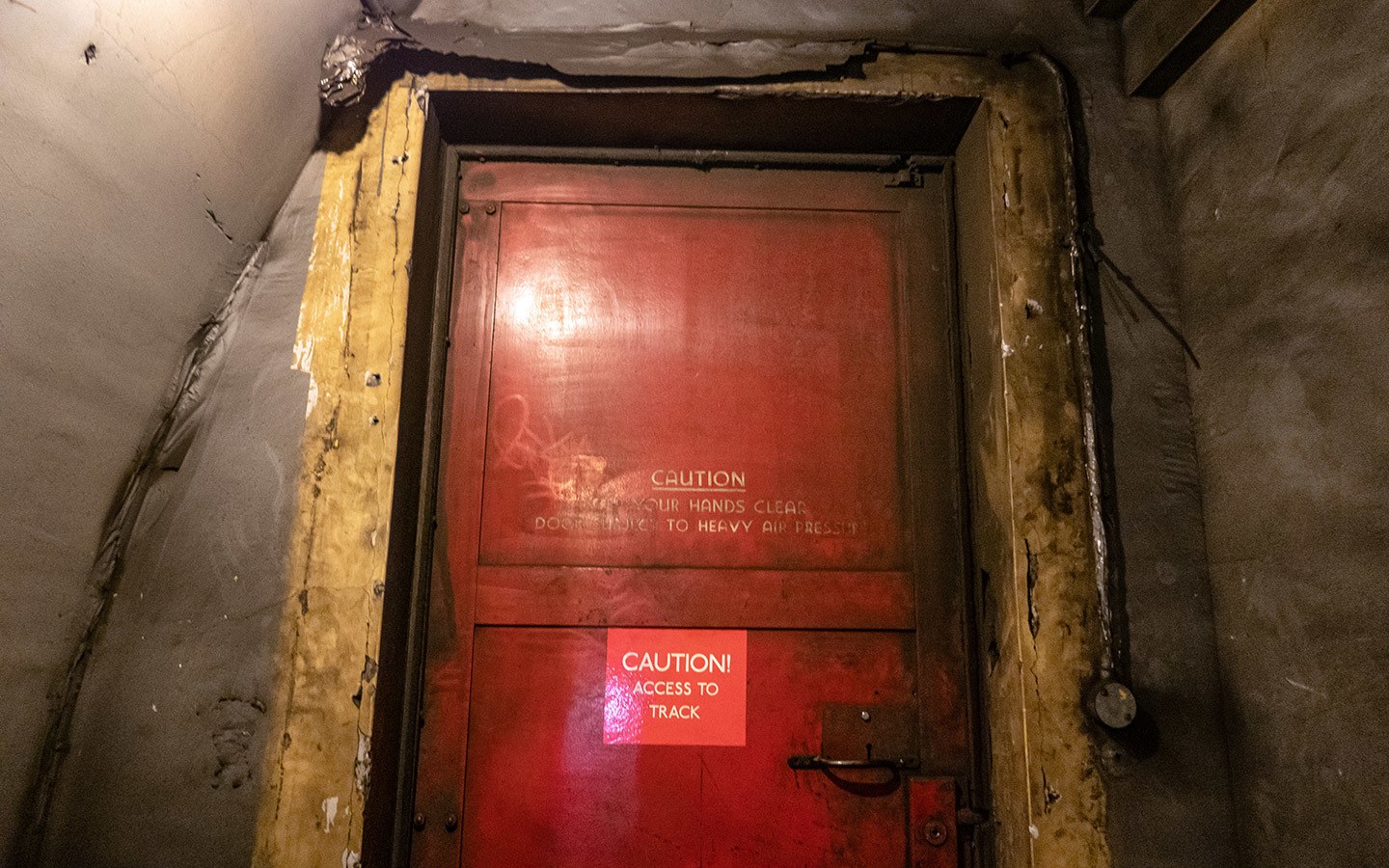 Doorway to the tracks

Every time a train passed we were told to turn out our torches so we didn’t startle the drivers, and standing in the dark with trains rumbling past and dust and air swirling around gives you an insight into how disorientating it must have been to spend weeks at a time down there.

The trains pass just a few feet away, and when one slowed down we could see into the carriage at passengers who had no idea that we or any of the tunnels were down there. A section of the platform was left open so REC executives could signal to to picked up by passing trains – which made me wonder about those unexpected mid-tunnel stops on the Tube these days? 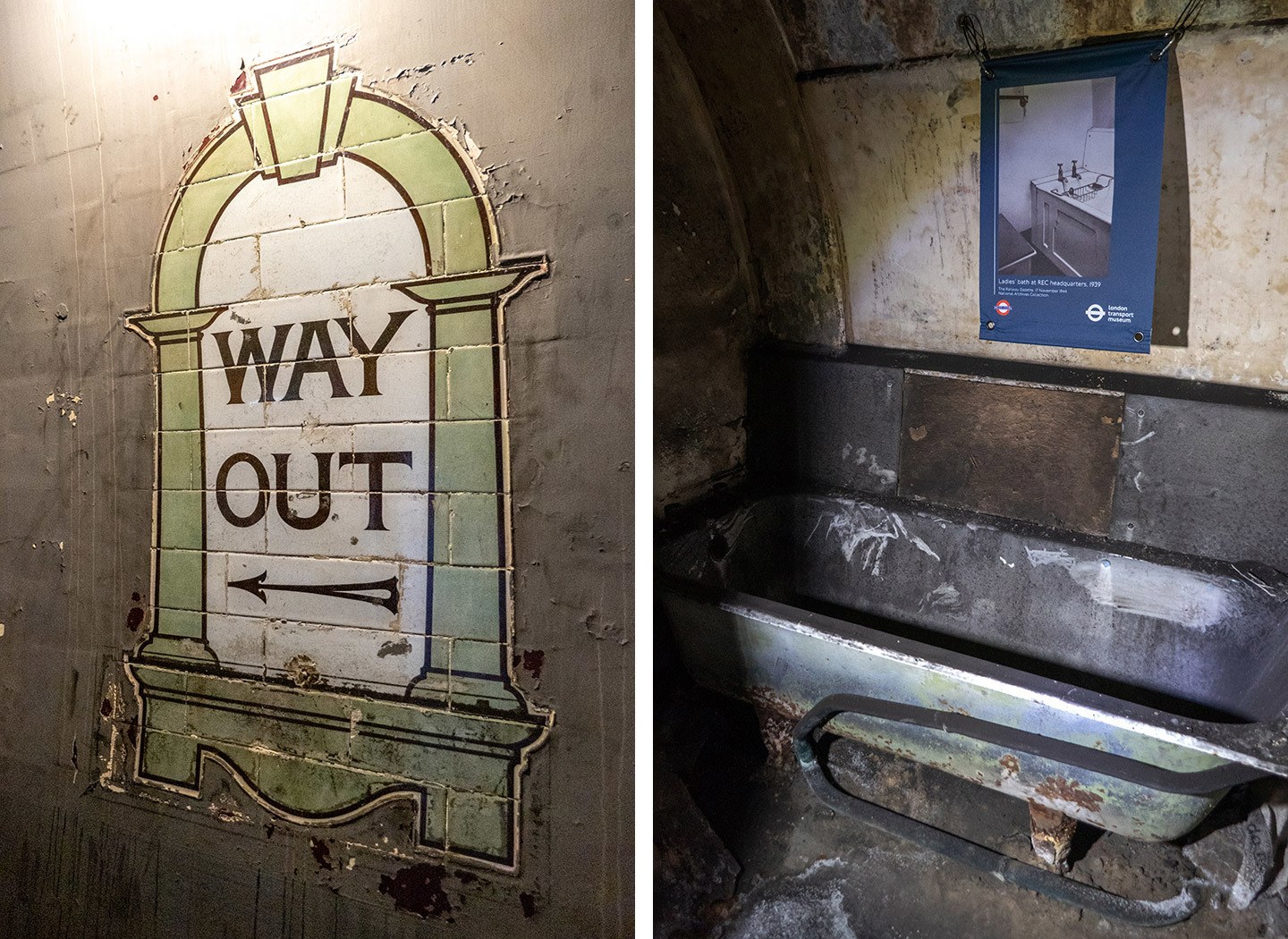 Original tiling and the old bathrooms

Although every bit of space from the two main tunnels was made use of, when Down Street was converted there were strict instructions that the emergency tunnel was to be kept clear for ventilation. But in 1941, an order from above came that ‘a certain gentleman’ had requested his own personal quarters be constructed down there, and within six weeks they were ready.

It’s thought that Churchill never actually made use of his Down Street quarters, but with the discovery of more historic records and documents, there might well still be more stories to uncover and more secrets of Down Street Tube station still hidden away underground. 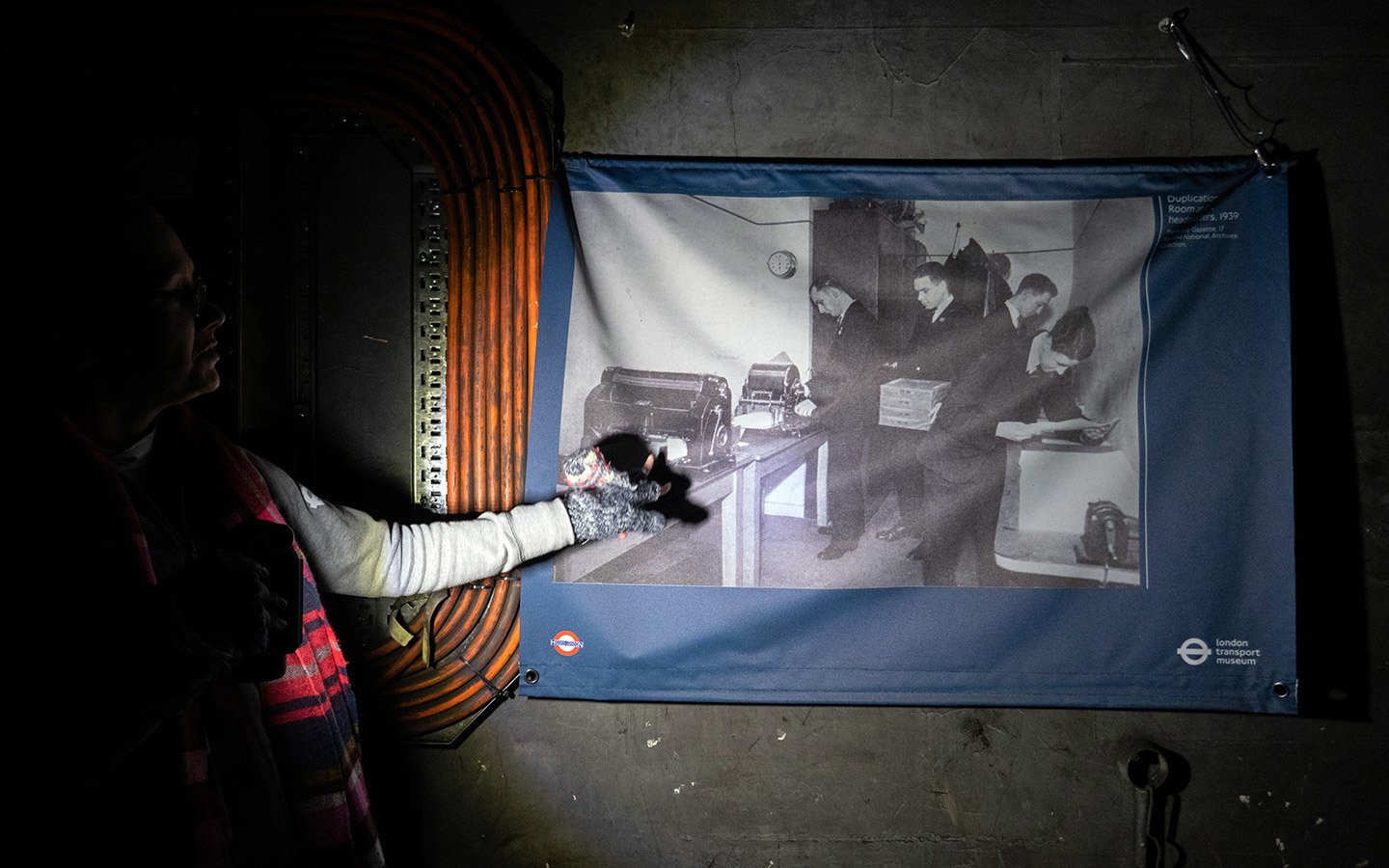 Our guide lighting the way

Down Street is one of the London Transport Museum’s Hidden London tours, which cover eight different underground sites across the city. The Down Street tour takes 90 minutes and costs £85 per person (£80 concessions),  including include a one-day pass to London Transport Museum. Hidden London tickets go on sale a few times a year and usually sell out fast, so it’s worth signing up to the mailing list to get notified when the next batch will be released.

Please note that visitors need to climb up and down 122 stairs on the tour – there’s no lift or toilets on the route and it can be dark and includes small spaces and uneven pathways. You can also take a special tour and cocktails package (£104 per person or £99 concessions) which includes a gin or whisky cocktail at nearby Flemings Hotel in Mayfair as well as a sharing food platter – not quite Churchill’s Champagne and caviar but a very good end to the tour! 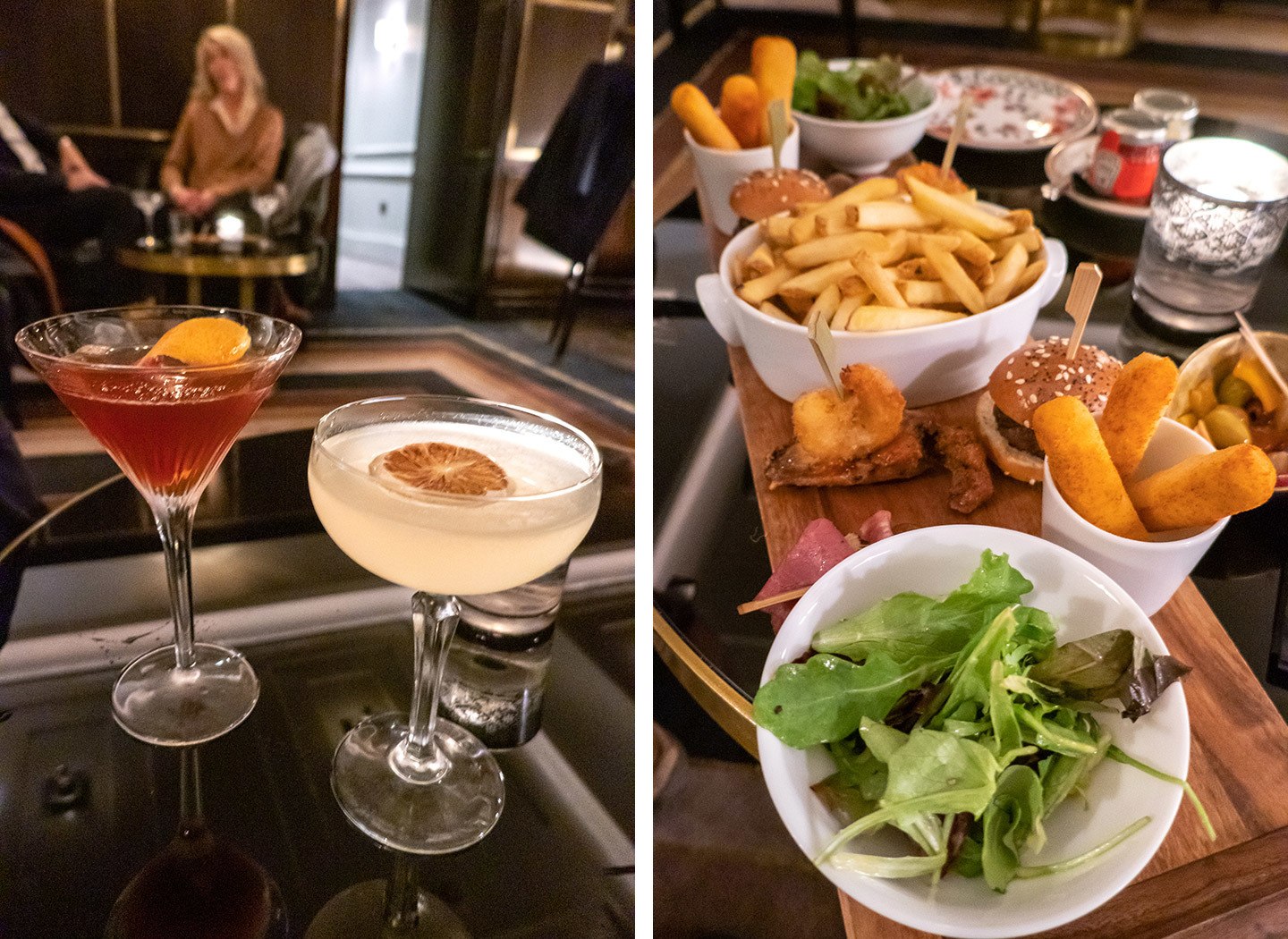 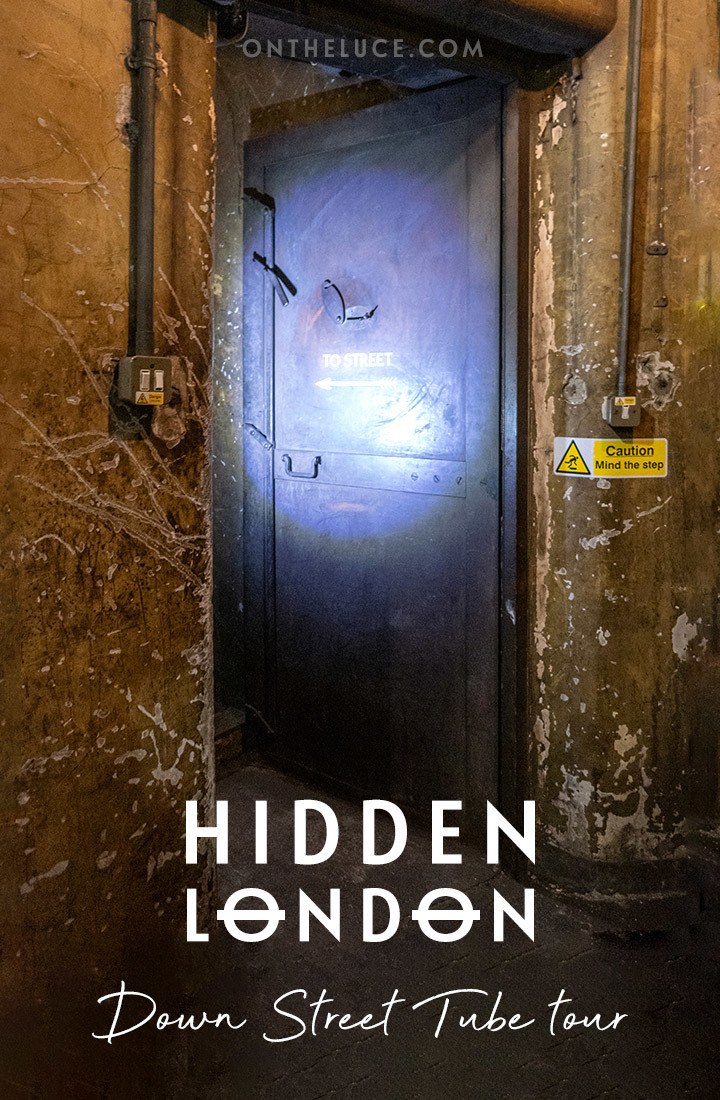 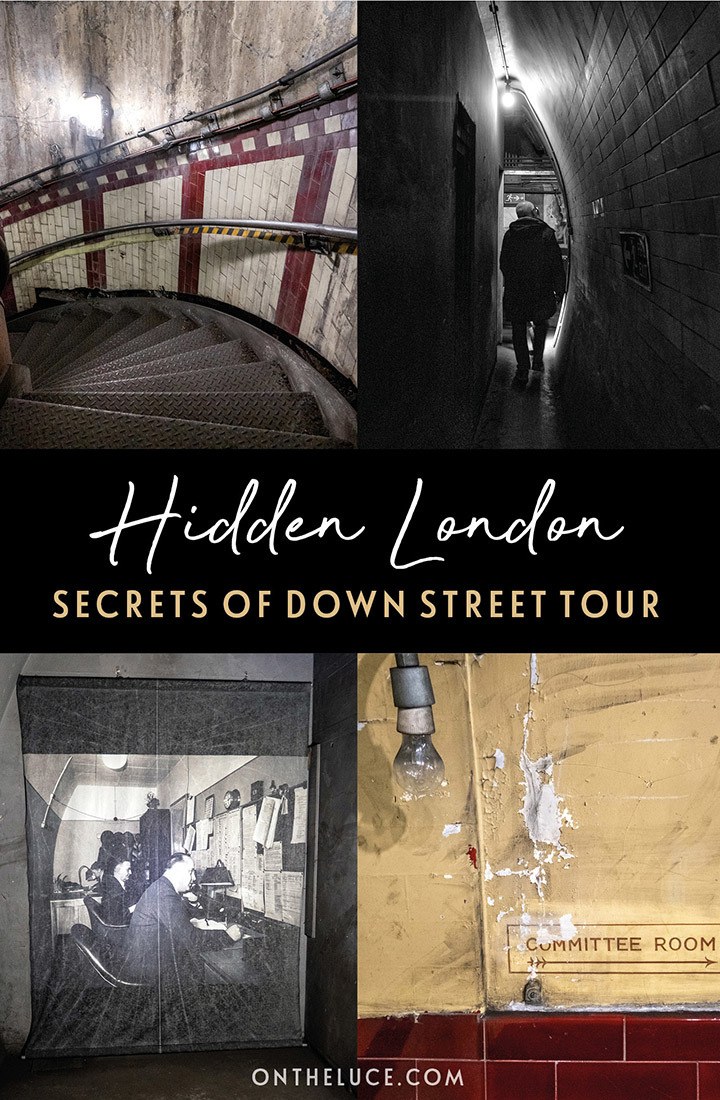 Could you tell me if I can go on a tour of Down Street station please?

Hi, yes tours are available to book through Hidden London at the London Transport Museum – these are the current dates https://www.ltmuseum.co.uk/whats-on/hidden-london/down-street

Many thanks for this. I'll get right on it. Cheers! Colin

Hello Some time ago I finished the biography of my late mother Beryl M. Affleck (nee Dodd) 1923-2007. While not explicitly naming Down Street station in my conversations with her, I am quite certain that she was employed there during the blitz as a telephone operator or 'telop'. Do you have any idea how I might confirm that this was so? Are there any lists or government files that might be able to help? Many thanks in advance. Colin Affleck

How interesting! It must have been a fascinating place to work. The site is managed through the London Transport Museum so they should be able to put you in touch with whoever is the best person to speak to about accessing records. Best of luck with your search.

This sounds brilliant! It's amazing to think of how much is hidden below us when we're rushing around in London!

Definitely worth a trip!