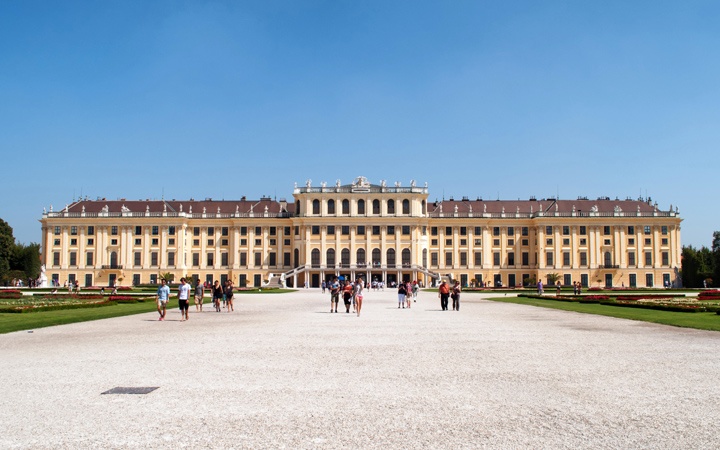 Just outside the centre of Vienna, Schloss Schönbrunn one of the city’s most famous and impressive buildings. It’s sometimes called the Austrian Palace of Versailles – and after I’ve failed to visit the French version in all my trips to Paris, I was determined to see the Austrian one. Schönbrunn is set on an area of land which had been owned by the Habsburg family since 1569, and gets its name from a ‘beautiful well’ in the grounds. The original hunting lodge wasn’t quite so impressive, but in 1743 Empress Maria Theresa redesigned the building into a grand palace housing almost 1000 people and with 435 acres of gardens – a mixture of formal gardens and a large area of parkland, along with its own zoo and maze. 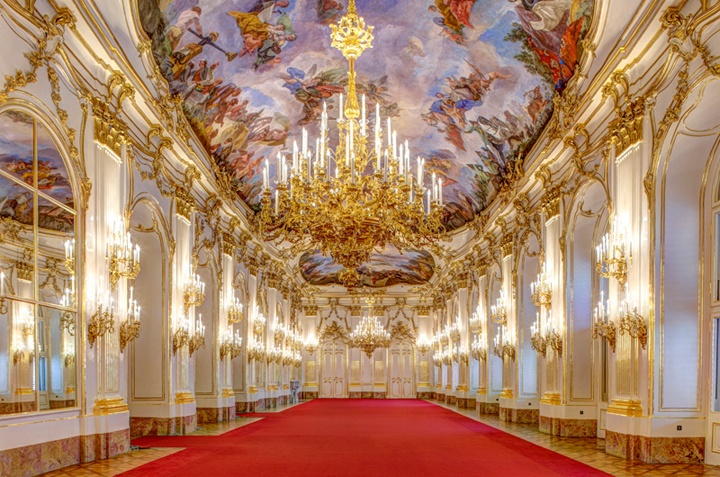 The Great Gallery, decorated with frescoes and plenty of gold

Marie Theresa might have left the biggest mark on the palace, but its most famous resident came a few generations later – Empress Elisabeth, better known as Sisi. Hugely loved by the Austrian people, she was almost like their version of Princess Diana, and there are plenty of similarities between them. Both were beautiful and glamorous, both went beyond the social protocols surrounding them to get close to people from all walks of life, both were dedicated to social causes, and both died tragically young. Married to Franz Joseph when she was only 16, Sisi struggled with the formality of court life. Her overbearing mother-in-law didn’t let her have any say in running the palace and even took her children away from her. 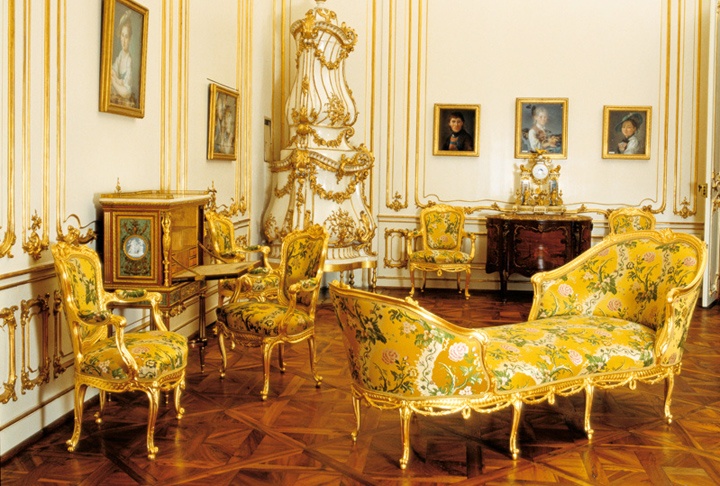 Sisi was famously beautiful and was obsessive about grooming. She used to spend two hours a day on her floor-length hair, dieted and exercised constantly and was sewn into leather corsets to give her a 16-inch waist. After the age of 32 she refused to have any more portraits painted or photos taken so people wouldn’t see her grow old. It was the one thing she could control in her life where everything else was regimented.

She was hit by more than her share of tragedies – her youngest daughter died of typhus and her son later died in a bizarre murder-suicide with his mistress. After that Sisi withdrew from her duties and travelled the world, until in 1898 when she was stabbed by an Italian anarchist and died in Geneva. Her husband Emperor Franz Joseph lived in the palace until his death, when it was taken over by the state and later listed by UNESCO as a World Heritage site, which now sees around 2.7 million visitors each year. 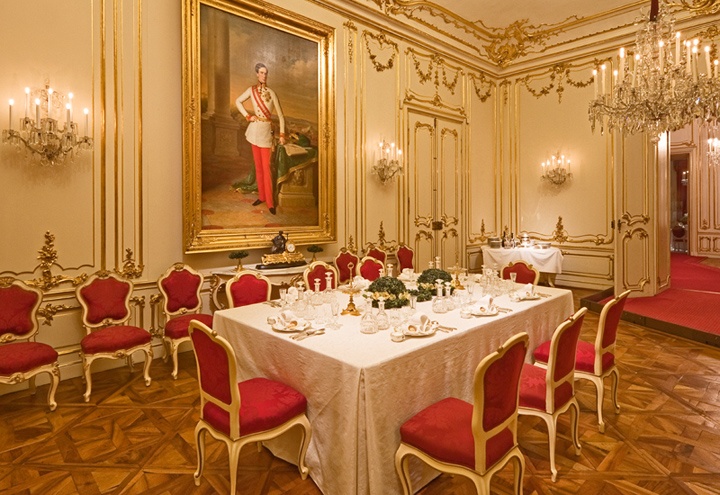 The Marie Antoinette room, a dining room named after a tapestry that used to hang there

It’s an awe-inspiring sight – the main part of the palace is 175 metres wide and has 1441 rooms. Only a fraction of them are open to the public, but it’s enough to get an impression of the grand interior, with its Rococco-style decoration. Every surface is covered with a combination of decorative gold leaf, painted frescoes, white enamel and crystal chandeliers. Not bad for a summer hunting lodge.

You can take a tour around 40 of the rooms, including those used by Franz Joseph and Sisi. These are a bit more simple in comparison to the incredibly ornate state rooms, which were the site of some important moments in the history of Austria. There’s the Blue Chinese Salon, decorated with blue and white porcelain vases, where Emperor Charles I ended 640 years of Habsburg rule in Austria when he abdicated in 1918. The Napolean room which Napolean used as a bedroom when he occupied Vienna in the 1800s. The Great Gallery where John F Kennedy and the Russian head of state Nikita Khrushchev met in 1961. Or the Mirror Room where a six-year-old Mozart gave his first concert to Marie Theresa in 1772. 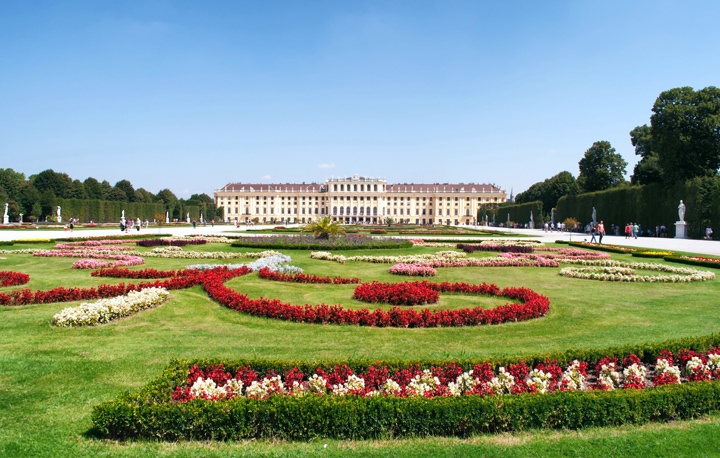 Looking across the Great Parterre gardens to the Palace

Directly in front of the palace in the formal Great Parterre, laid out with swirls of different coloured flowers breaking up the neatly trimmed grass lawn. At the end of it is the Neptune Fountain, which shows Neptune in a shell-shaped chariot surrounded by sea gods and half-man and strange half-fish creatures. Overlooking the gardens and palace is the the Gloriette, a gazebo perched high up on a hill which was built as a war memorial and now used as a cafe where you can recover after the climb to the top. Schönbrunn doesn’t stop there though, there’s also an Orangery, Botanic Gardens and Palm House, as well as it’s own 18th century fake Roman ruins. What more could you want in a summer house – even for a Habsburg? 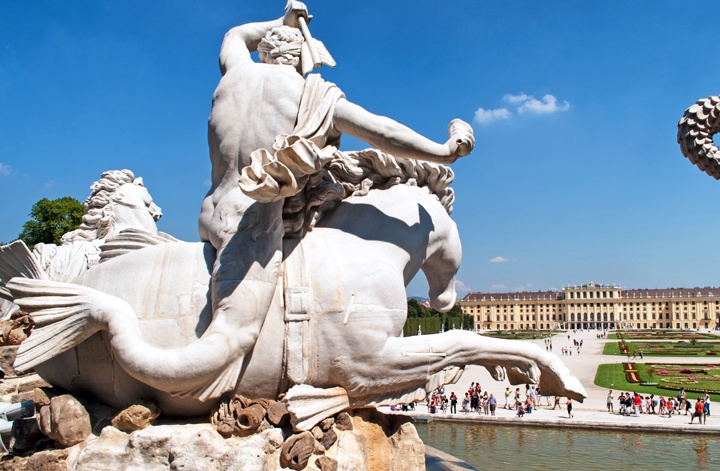 Schönbrunn Palace is just outside the centre of Vienna. You can get there by underground (line U4) or tram (line 10 or 58). The palace is open daily 8.30am–5.30pm (5pm from November to March and 6.30pm during July and August) and the park is open from 6.30am until around dusk. Palace audio tour tickets cost €13.30 for the standard Imperial Tour or €16.40 for the longer Grand Tour. There are discounts for under 25s and lots of different combined tickets available if you’re visiting other attractions. 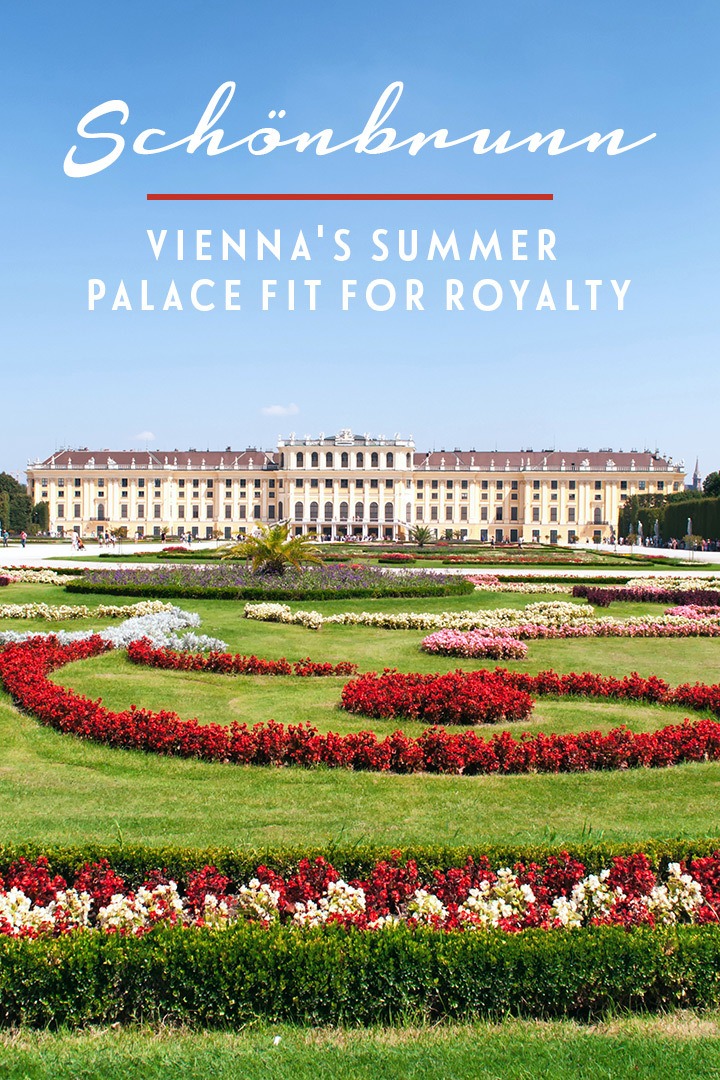 It does look pretty fabulous, Lucy. Never having done Vienna that makes us squits with palaces, does it? Somehow I don't think so. You'll be streets ahead when you're my age. :)

Versailles has become my nemesis though Jo, it just keeps eluding me! I'm off to Paris again in December but it's only a quick trip so yet again I might miss it out. Maybe 2015!

I've been to the Schloß Schönbrunn and it's a most beautiful place. In Berlin, they really like the Austrians as we have quite a few restaurants and cafes dedicated to their German-speaking cousin. In fact, there's a park not far from where I live called Volkspark Friedrichshai which has a pond and restaurant called "Schoenbrunn" and is famous for it's gardens, BBQ's, and having one of the best Vienna Schitzels in Germany!

How funny! Though I imagine the Berlin Schoenbrunn gardens are a bit smaller than the originals!

Lovely shots! I have nice memories from the palace, which I visited in high school. It didn't have much to do with the actual building or its beautiful gardens, but a certain handsome guy on the same trip... Anyway, definitely a place one should visit when in Vienna. :)

Glad to bring back some good memories (even if they weren't really about the Palace ;-)

Awe-inspiring is exactly right about Schonbrunn. It was December when we visited so we got to see the Christmas market right in front of the palace. It was absolutely beautiful.

Wow I bet it was beautiful is winter, and with snow it would be just lovely!

Thank you, it's certainly the grandest summer house I've ever seen!