How to spend a weekend in Cheltenham: Discover the best things to see, do, eat and drink in Cheltenham in a two-day itinerary featuring this Regency town’s beautiful buildings, parks and festivals.

From an 18th-century spa destination to a modern festival town, my home town of Cheltenham can sometimes be overshadowed by its more touristy neighbours – with Oxford on one side, Bath on the other and picture-postcard Cotswold villages around it. But Cheltenham has lots to offer as a weekend break destination in its own right.

It has some of the UK’s best-preserved Georgian architecture, pretty parks, festivals dedicated to everything from music and literature to horse-racing, and an impressive array of places to eat, drink and shop. So why not discover this Regency town with my two-day itinerary which will show you how to plan the perfect weekend in Cheltenham.

How to spend a weekend in Cheltenham

Check into your accommodation then start your weekend in Cheltenham with a pre-dinner drink at The Grape Escape. This wine bar on Regent Street serves a selection of over 20 sparkling, white, rosé, orange and red wines by the glass. The menu changes every week so it’s a good chance to try something new, and they also do wine flights with five to try.

Then it’s a short walk to Petit Coco for dinner, a cosy underground bistro that’s a taste of France in the heart of Cheltenham. The menu comes on a chalkboard and includes French classics like magret de canard and moules marinières – and they do a fantastic crème brûlée. Deep red walls, rustic furniture and candlelight add to the atmosphere.

Start the morning with a walk through Montpellier and Imperial Gardens, close to each other in the south of town. Both parks were originally built as pleasure gardens for the well-heeled visitors who’d come to Cheltenham to ‘take the waters’. Cheltenham became a centre for spa tourism after medicinal waters were discovered in the 18th century.

King George III spent five weeks in Cheltenham in 1788 which kickstarted the tourism industry. Many of the town’s impressive Regency buildings were built around this time and famous names like Jane Austen, Lord Byron and Queen Victoria came to Cheltenham to visit the spas and enjoy, fetes, fireworks and promenades through the gardens.

Today the parks are used for Cheltenham’s festivals. It’s known as the festival town and hosts a series of events through the year, including jazz (May), science (June), food (June), music (July) and literature (October) festivals. But even if you’re not there for a festival, you can grab a coffee from one of the park cafés and stroll around the gardens.

Then have brunch at The Ivy, one of Cheltenham’s most stylish spots. This restaurant and bar is located inside the Grade I-listed Montpellier Rotunda building, which was one of Cheltenham’s original spa buildings. It still has its impressive domed roof as well as an Art Deco-style décor inspired by Cheltenham’s famous Gold Cup horse race.

They serve brunch from 11am at weekends, with traditional favourites like eggs benedict, buttermilk pancakes, locally sourced smoked salmon and a tangy Bloody Mary on the menu, as well as more substantial lunch-style main dishes.

Take a walk down the Promenade, Cheltenham’s main shopping street lined with elegant Georgian buildings. On the way you’ll pass the Neptune Fountain, built in 1893 and allegedly inspired by the Trevi Fountain in Rome, and the flower-filled Long Garden.

Learn more about Cheltenham at The Wilson art gallery and museum. This recently refurbished museum is free to enter and has a real mix of exhibits, from local archaeological finds and Arts and Crafts furniture to 17th-century Dutch paintings and Oriental porcelain. There’s also a gallery dedicated to local hero Edward Wilson.

Wilson was born in Cheltenham in 1872 and studied at Cheltenham College before joining missions to Antarctica with Shackleton and Scott. He was a naturalist, artist and doctor on Scott’s ill-fated 1912 Antarctic expedition and died there with him.

Refuel with a stop at the Regency Tea Rooms for a traditional afternoon tea. This tea room is a cheerful spot with colourfully painted walls and and vintage crockery on display. You can keep it simple with tea and cake or go all in with an Imperial Afternoon Tea.

It includes scones with jam and Cornish clotted cream, and a selection of homemade cakes and sandwiches, accompanied by a pot of tea – and an optional Champagne or Prosecco upgrade. There are also dairy-free, vegan and veggie versions available.

Then walk it off with a trip to the Pittville Pump Room, 15 minutes’ walk north of town. The Pump Room was built in the 1820s for banker Joseph Pitt who wanted to create a rival town. The centrepiece was the area’s largest spa building, built of Bath stone with Grecian columns and statues, and surrounded by manicured lawns and ornamental lakes.

Today the Pump Room is mainly used for events, but it is open to the public. You can download a free audio trail around the building which tells the story of different characters from its history. There’s still an original spring too but unfortunately you can’t taste the spa waters at the moment, but it’ll hopefully be available again soon.

Start the evening with a pre-dinner drink at to Gin & Juice at 131 The Prom, a popular bar named ‘The Best Hotel Gin Bar’ in the UK this year. They serve over 400 different gins from all around the world and each comes with a suggested mixer and garnish. Choose from a spot in the moodily lit bar or on the terrace, with heaters for chilly nights.

Then have dinner at Kibou, a Japanese restaurant on Regent Street decorated with Tokyo-style manga artworks and cherry blossom trees. They specialise in sushi and sashimi, but if you prefer your food a little more well-cooked, they also serve other Japanese dishes like ramen, donburi rice bowls and katsu curry – as well as a range of sakis.

One of the great things about Cheltenham is all the green spaces it has – from the town’s parks to the Cotswold countryside around it. After breakfast, head out to one of the hills surrounding Cheltenham for a walk with a view. Choose from Leckhampton Hill to the south or Cleeve Hill to the east, both of which are a short drive or bus ride from town.

Leckhampton Hill is an area of rare limestone grassland home to wild orchids and butterflies. It was also the site of a limestone quarry in the late 18th century. A 3-mile circular walk passes the remains of the lime kilns as well as a rock formation known as the Devil’s Chimney, following part of the Cotswold Way long-distance walk.

Or Cleeve Hill is the highest point in the Cotswolds at 330 metres, with panoramic views over Cheltenham Racecourse, Gloucester Cathedral and out as far as the Black Mountains in Wales. There’s a 6-mile walk along another stretch of the Cotswold Way which loops around the top of the hill and down to the small hamlet of Postlip.

Head back into Cheltenham for Sunday lunch at Gallimores Kitchen. This friendly little restaurant is tucked away in Montpellier Courtyard, surrounded by boutique shops and cafés. As well as a delicious Sunday lunch with all the trimmings – with a choice of beef, port, chicken or meat-free – they’re also known for their fish and seafood dishes.

Then finish your weekend in Cheltenham with a wander around Montpellier and the Suffolks. This part of town has lots of interesting independent shops to explore – some of our favourites are Bodega for women’s fashion, Curious City Print Shop for quirky artwork, Appellation Nation for wine, Edible Art Patisserie for macarons and Rossiter Books.

Map of things to do in Cheltenham

How to get to Cheltenham

Cheltenham Spa railway station is around 2 hours by train* from London Paddington (with some direct services and others where you have to change in Swindon or Bristol Parkway) and around 45 minutes from Birmingham or Bristol Temple Meads. There are also National Express coaches from London Victoria and Heathrow Airport to Cheltenham.

The nearest airports are in Birmingham or Bristol. You can take a train from Birmingham International to Cheltenham in around 75 minutes. Or catch the Bristol Airport Flyer bus to Bristol Temple Meads train station (25 minutes) then the train to Cheltenham.

Central Cheltenham is small and easy to explore on foot. Though if you want to cover more ground you can hire a bike or ebike from The Bicycle Hub. The Honeybourne Line is an easy, flat cycle route which runs along the route of a former railway line past colourful street art, or you can head out into the countryside around Cheltenham.

To reach the hills around Cheltenham without a car you can take the Stagecoach F bus to the foot of Leckhampton Hill or the W bus to Winchcombe via Cleeve Hill.

Where to stay in Cheltenham

The Queen’s Hotel* has a prime position overlooking Cheltenham’s Imperial Gardens. This period property dates from 1838 and was one of Britain’s first purpose-built hotels, with original features including hand-painted wallpaper in the atrium. Its 84 rooms are spread over three floors and there’s also a Gold Cup Bar, lounge and Victoria’s restaurant.

No 38 The Park* is a Georgian townhouse turned boutique hotel near leafy Pittville Park in the north of Cheltenham. Communal spaces are decorated with antiques, flowers and artworks and there’s a restaurant and bar. The 13 bedrooms range from Cosy to Outstanding and some come with rolltop baths – they’re also dog-friendly.

Or if you prefer self-catering, Neptune Apartments have 12 stylish apartments in a Regency building on Cheltenham’s Promenade. Named after Cotswold villages, each apartments sleeps two but they vary in size with a mix of studios and one-beds. Décor is smart and contemporary with luxury touches from jewel fabrics and high-end appliances. 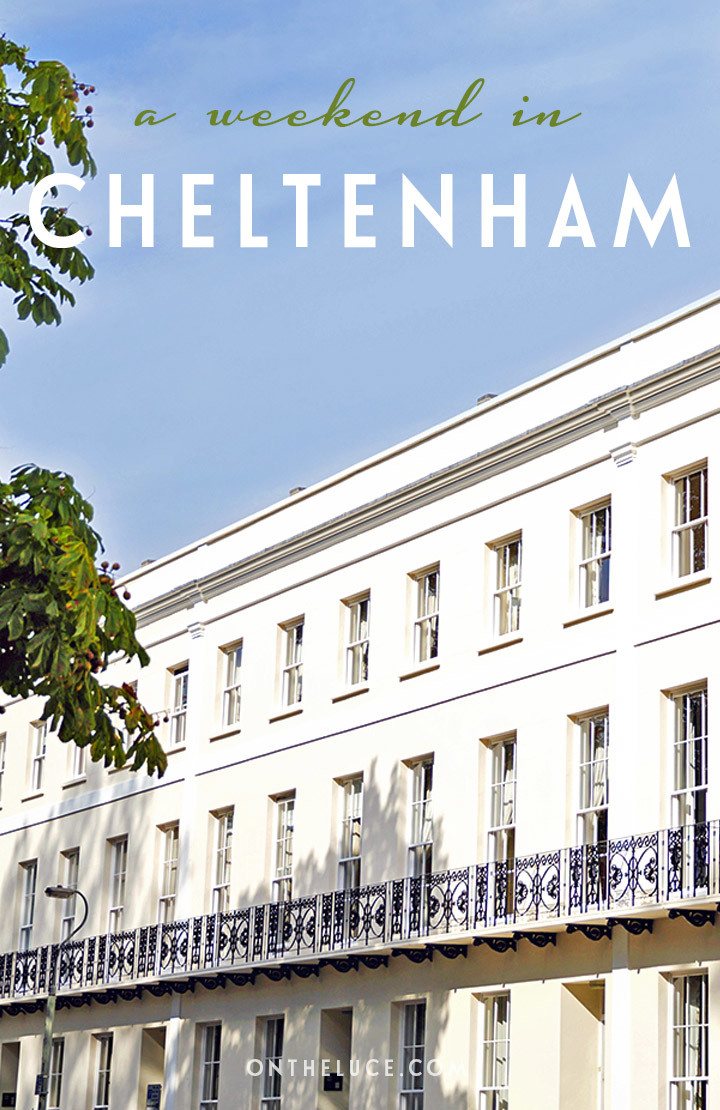 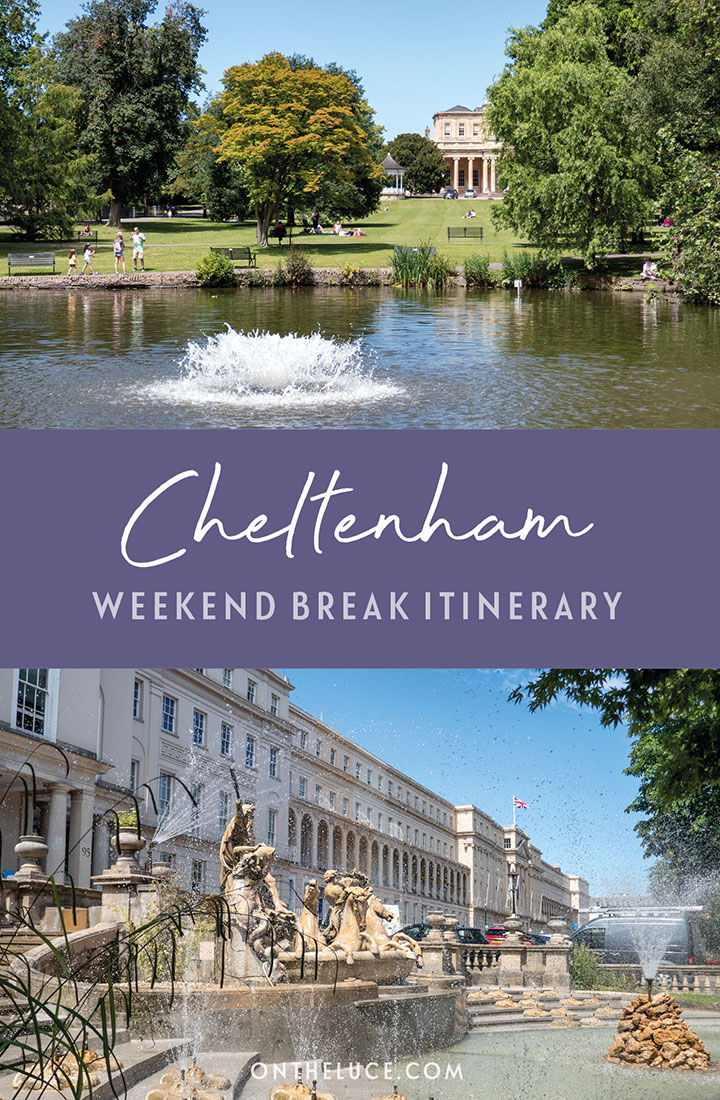 A weekend in The Cotswolds: A 2-day Cotswold itinerary

A weekend in Bath: A 2-day Bath itinerary

How is it for solo travelers? & as a winter weekend break.

Hi I think it's fine for solo travellers, small enough and easy to get around, and in winter there are some great events like there's the Light Up Cheltenham light show in February.

Thanks for this Lucy. We are on our way to Cheltenham now and love your recomendations. We will be housesitting for a week and have access to bikes. Is Cheltenham good for biking? If so do you have any recommendations. I am not keen on step hills but the rolling hills I remember the Cotswolds for should be fine.

Hi Toni, hope you have a great time in Cheltenham! The town centre is fairly flat and easy for biking, and a bit further afield Sustrans has some good options.. Avoid Leckhampton Hill or Cleeve Hill though if you don't like hills – they're a real thigh-burner!

A lovely review of my hometown :-)

Thank you! Love living in Cheltenham, it's got so many great places to explore.