A weekend in Bath: A 48-hour itinerary

With its famous Georgian terraces, thermal spa waters, cream teas and Jane Austen – you can’t say Bath isn’t on the UK tourist trail. Its quintessentially English charms pull in visitors from around the world and it has so many historic buildings that the entire city’s been designated a UNESCO World Heritage Site. But although you might have to dodge a few tour groups, it’s more than worth it to explore the sights of one of England’s most beautiful historic cities. So here’s my 48-hour itinerary for the perfect weekend in Bath.

How to spend a weekend in Bath

If you feel like splashing out, why not spend your weekend in Bath in style at the city’s most desirable address. At the Royal Crescent Hotel*, two 18th-century Georgian townhouses have been merged together to create a five-star hotel and spa. It’s full of original features with period artworks, classical statues and chandeliers. There’s a luxurious spa with indoor pool, a restaurant, bar and an acre of landscaped gardens tucked away behind the hotel.

Or if you’re on the budget one of the city’s best deals is Bath University’s student residences. There’s a mix of double, twin and single rooms with en-suites in buildings ranging from Georgian terraces to modern residences. They have greatest availability in the Easter and summer holidays, but some rooms are available all year, starting from £65 B&B.

Call in to the Canary Gin Bar on Queen Street for a pre-dinner drink. The bar is run by the Bath Gin Company gin, who’ve created a menu of ‘Gin’ Austen cocktails using their small-batch gins, as well as serving 230 other gins. Then head to Green Park Brasserie & Bar for dinner – a steakhouse and jazz bar in a converted railway station booking hall.

For an insight into Bath’s history, start the day with a walking tour with the Mayor of Bath’s Corps of Honorary Guides. These two-hour tours are led by knowledgeable local guides who share their love of the city on a relaxed stroll through some of its highlights. Tours are free (with no need to tip) and leave from the courtyard by the Roman Baths at 10.30am.

Or you can made your own tour of Bath’s honey-stone highlights. Start at the Royal Crescent, one of Bath’s most famous landmarks. This curved terrace of Georgian townhouses arcs around a perfectly manicured lawn. The Royal Crescent was built in the 1770s and its buildings haven’t changed much since then, at least on the outside.

Most are private residences – when they’re not being used by film crews for period dramas – but Number 1 Royal Crescent is now a museum (entry £12 adults, £10.80 students/seniors, £6 children). Inside you can go back in time to the 18th century and see how wealthy Georgians lived, complete with authentic furniture, décor and fascinating details of everyday life.

The Royal Crescent is one of many buildings made from the distinctive honey-coloured Bath Stone. Quarried out from the hills around the city, it’s a type of limestone that was first used by the Romans and later used for churches, bridges and houses all around Bath.

Another impressive Bath address is The Circle, with three sections of curved buildings forming a circle. And it’s just a few minutes walk from there to the Bath Assembly Rooms. These were the hub of the 18th-century social scene, with elegant rooms for tea drinking, cards and dancing. Today they’re open to the public when not in use for events.

You can follow in the footsteps of Jane Austen, who attended balls at the Assembly Rooms when she lived in Bath in the early 1800s and featured them in her novels Northanger Abbey and Persuasion. Then stop for lunch at Sally Lunns, the oldest house in Bath. It’s home to a Bath classic – the ‘Sally Lunn bun’. This kind of brioche is spread with butter or cream, made to a recipe allegedly brought to the country by a 17th-century French emigrant.

After lunch, cross the Abbey Church Yard to Bath Abbey. The current abbey was built in 1499 but there’s been a church on the site from the 8th century. Admire the west front, with carved stone angels climbing Jacob’s Ladder to heaven, and the fan-vaulted ceilings and stained-glass windows inside. Or take a guided tower tour (£8) and climb 212 spiral steps to the abbey roof for a panoramic view of the city and down to the Roman Baths.

Head down to the water to Pulteney Bridge, passing the Parade Gardens, a popular spot for a promenade in Jane Austen’s day. The bridge was built in the 18th century for William Pulteney to connect Bath to the other side of the River Avon to help drive up land prices. He wanted his bridge to be eye-catching and elegant and certainly managed it.

Pulteney Bridge is one of only four bridges in the world with shops built into both sides, like Florence’s Ponte Vecchio – Les Misérables fans might also recognise it as the spot Javert jumped from in the 2012 film. Today it’s home to a mix of independent shops and cafés.

For a good view of the bridge, take a boat trip along the River Avon. Boat trips run from April to October and take about an hour, starting start just below Pulteney Bridge (£9 adults, £5 children). The boat travels under the bridge before heading out into the countryside as far as the pretty little village of Bathampton before returning to Bath.

Wine-lovers might want to check out Le Vignoble, an independent wine merchant and bar on Milson Street. Their wine selection changes every month and includes small producers and unusual varieties so it’s a good place to try something new. Then head back towards the Royal Crescent for dinner at The Circus, a family-run restaurant in a Georgian building which serves local and seasonal food like Wiltshire lamb and Devon crab.

Bath has long been famous as a spa – it’s even in the name – and it has some of the UK’s warmest geothermal springs. Start your Sunday by soaking in them at the Thermae Bath Spa. This huge spa building has taken historic buildings and transformed them with a modern glass and steel extension. There are two separate spa areas – the main New Royal Bath and the smaller circular Cross Bath, which you can also hire for small groups.

The New Royal Bath is spread over three floors, with spring waters flowing into the ground floor Minerva thermal baths. There are circular glass steam rooms, a sauna and spa treatment rooms above, where you can book a relaxing massage, facial or body wrap.

But the Thermae Spa’s star attraction is the rooftop pool, where you can soak in mineral-rich steaming water with spectacular views across Bath’s skyline. Entry to the spa costs £40 for a two-hour session at weekends, and includes towel, robe and flip flop hire.

You can have lunch at the spa’s Springs Café Restaurant, with a mixture of sandwiches, salads and smoothies (and wine if that all sounds too healthy) – you can go in wearing your robe and the extra time gets added to your spa session so you don’t miss out.

Next compare the modern spa experience with the Roman version at the Roman Baths (entry from £18.50 adults, £17 seniors/students, £11 children). The first baths were built here by the Romans in 70AD, along with a temple dedicated to the goddess Sulis Minerva.

Over a million litres of 46°C water still flows into the baths every day, but don’t be tempted to take a dip. If the bright green colour doesn’t put you off, tales of bacteria and radioactive lead pipes might. Instead you can take a tour – with audio commentary from Bill Bryson – which includes the Sacred Spring of Sulis Minerva, the original foundations and impressive open-air Great Bath. There’s also a museum of Roman artefacts including coins and carvings.

Then finish your weekend in Bath with afternoon tea at a city institution – the Pump Room. It was built in 1776 for visitors to take the waters, and is another location in Jane Austen’s novels. Indulge in a traditional Champagne afternoon tea for £36.50 or try a Somerset tea with cider for £19.50, all served in opulent splendour under the chandeliers.

And while you’re there, don’t forget to taste the spa waters from the King’s Fountain (free to Pump Room customers). With 43 different minerals it is reputed to be the cure for all sorts of ills, though lukewarm water with a metallic tang is definitely an acquired taste.

Have you visited Bath? Do you have any tips to add on what to see, do and eat?

Looking for somewhere to stay in Bath?* 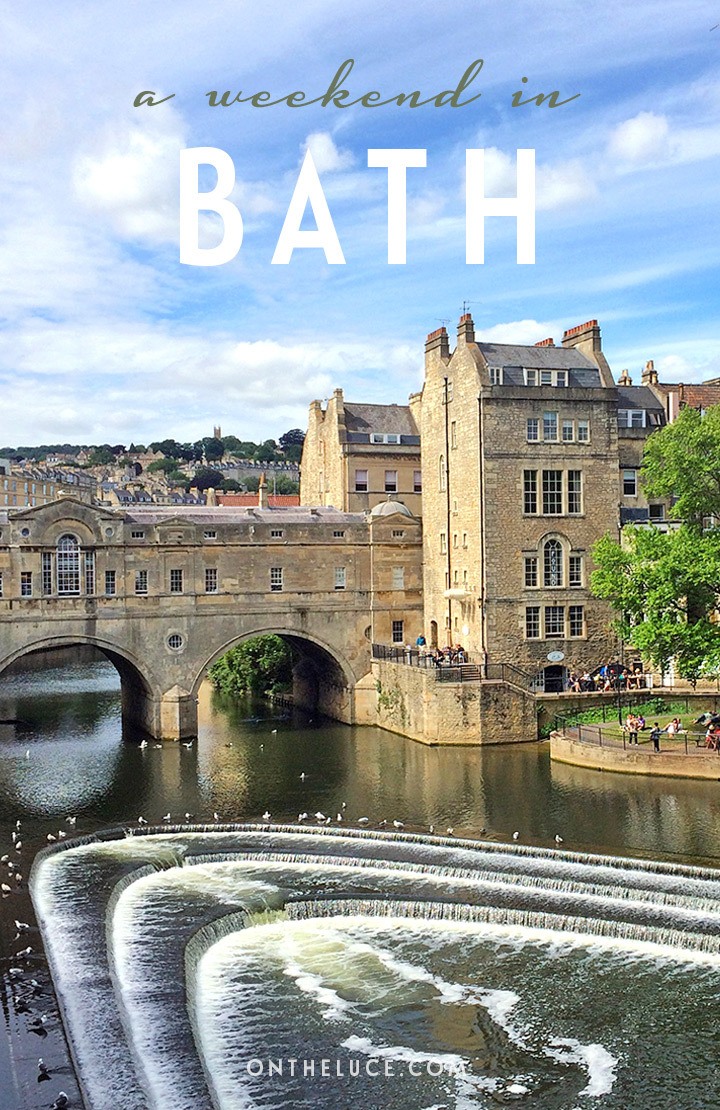 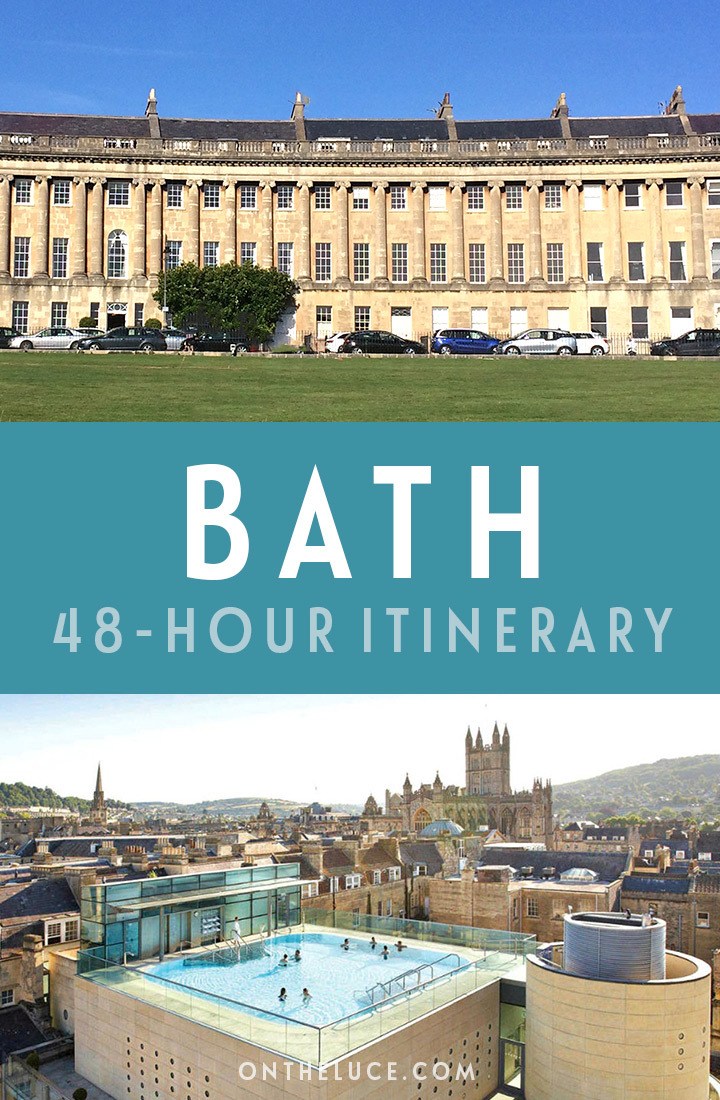