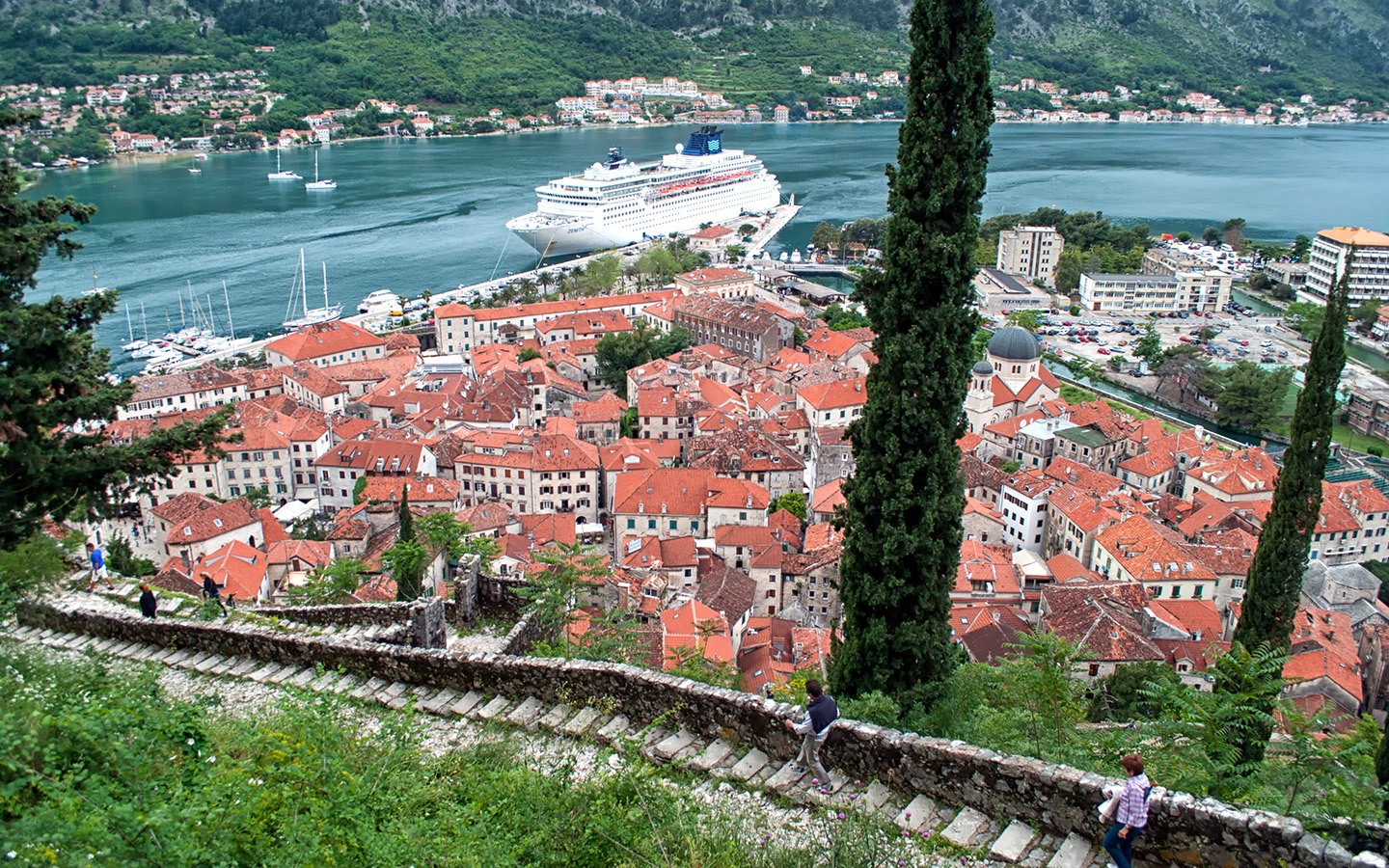 High above the medieval town of Kotor in Montenegro is one of the best viewpoints over the Bay of Kotor – the city walls. In the daytime the grey stone of the walls blends in with the greyish-green of the mountains behind and it can be hard to pick them out when you look up at the hillside. But when the sun goes down, Kotor’s city walls are all lit up – we had a perfect view of them from where we were staying across the bay in Muo. When the bay is calm, the lights reflect in the water of the fjord below and almost make it look like the walls form a circle.

Read more: Montenegro’s beautiful Bay of Kotor: Things to see and do 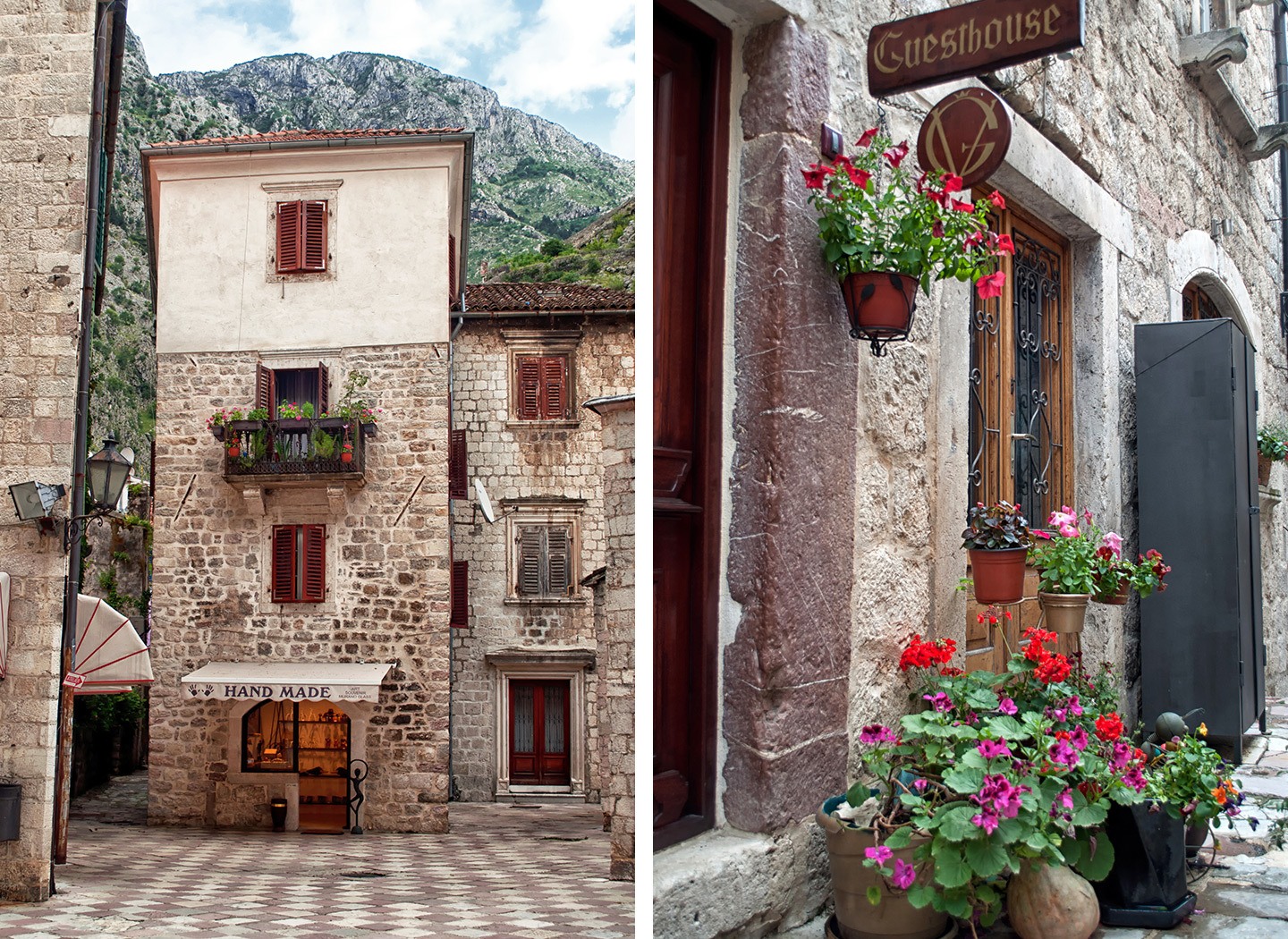 Inside the city walls

The earliest Kotor city walls were built into these steep, rocky cliffs back in the 9th century to protect the town from invaders. They were added to over the years by whoever ran the city at the time – everyone from the Byzantines to the Venetians – until the 15th century when the walls finally formed a full loop running up into the hillside above the town.

The walls are mixed in with an array of ramparts, gates, churches, forts and bastions too. And despite the onslaught of time, invasions and earthquakes over the years they are still remarkably well-preserved. Today the climb to the highest point is one of the best things to do in Kotor – though you do have to put in some effort if you want to earn those views. 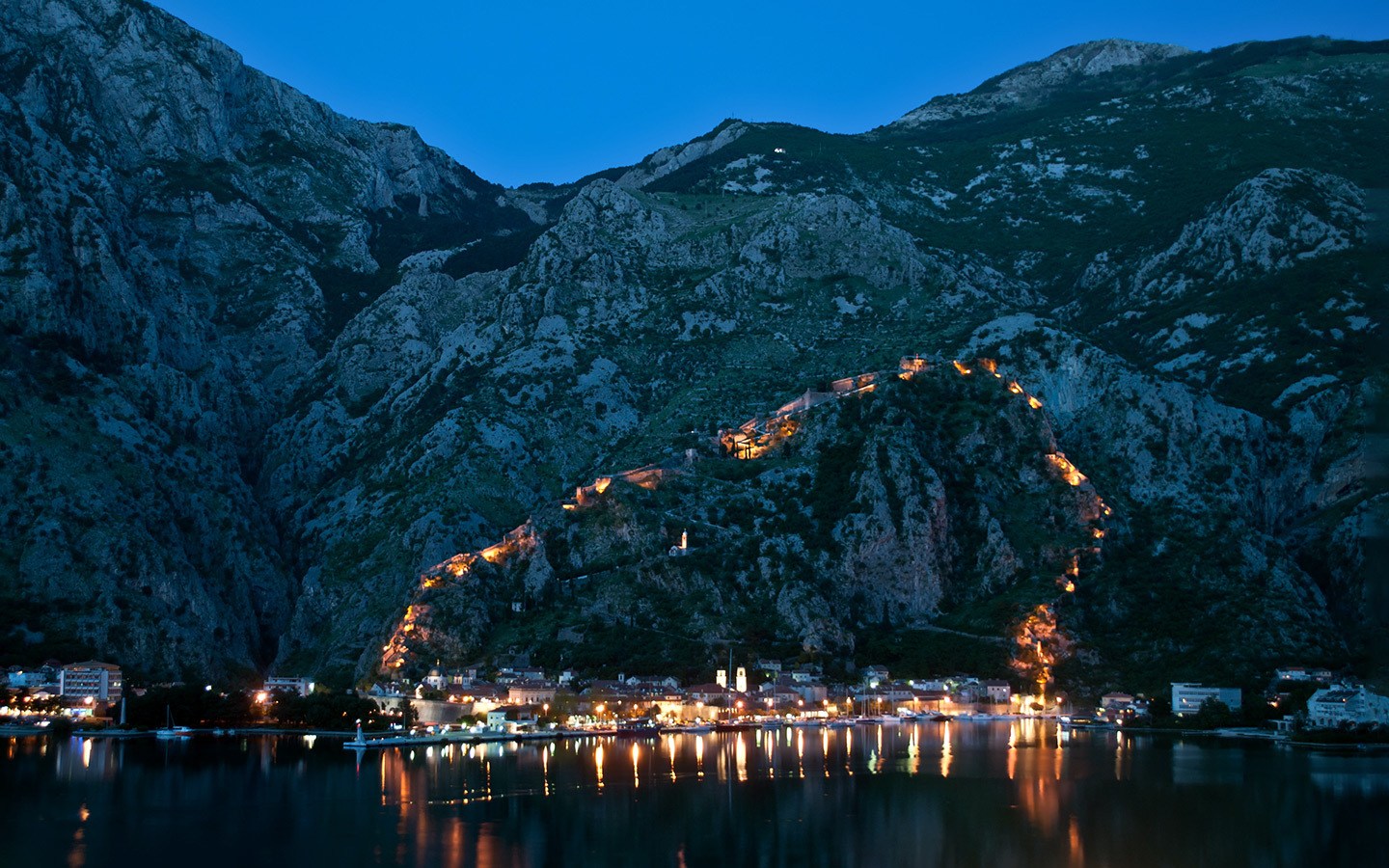 We started our walk around the Kotor city walls from the entrance near the North Gate and St Mary’s Church. As you go into the depths of the old town the passageways get narrower, draped with telegraph wires and lines of washing above your head. Through an archway at the bottom of the hill you’ll know you’re in the right place when you see a woman under an umbrella.

This is where you pay your entry fee (between 8am and 8pm from May to September) and from there you just follow the walls upwards. A long way upwards – the climb to the fortress at the top takes you up to 1200 metres, or around 1350 steps. We were there on a cloudy cool day perfect for walking, but in summer it can be a slow, thirsty slog to the top. 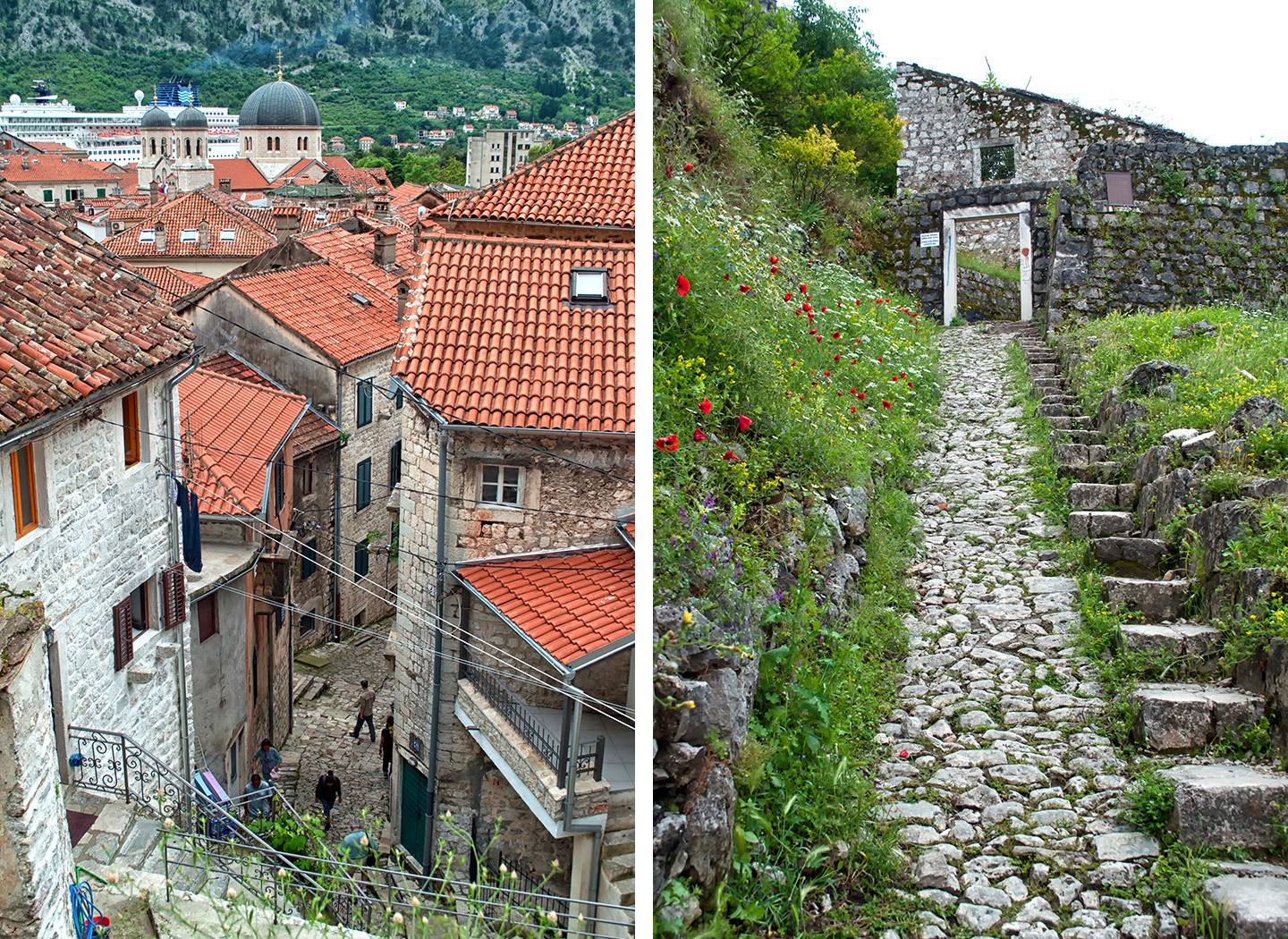 The start of the walk

There was a cruise ship docked in Kotor on the day we climbed the walls, so we followed a steady stream of people on their way to the top. The walls vary in width as they zig-zag uphill – in some places they are just a couple of metres wide and in others they widen out into a terrace.

The path is made up of rough cobblestones, so a lot of the time the easiest place to walk is along the steps at the side – and it’s a good idea to wear decent walking shoes. In late spring the banks along the path were dotted with poppies and other wildflowers, the perfect excuse for me to stop and take some photos whenever my legs started protesting about the climb. 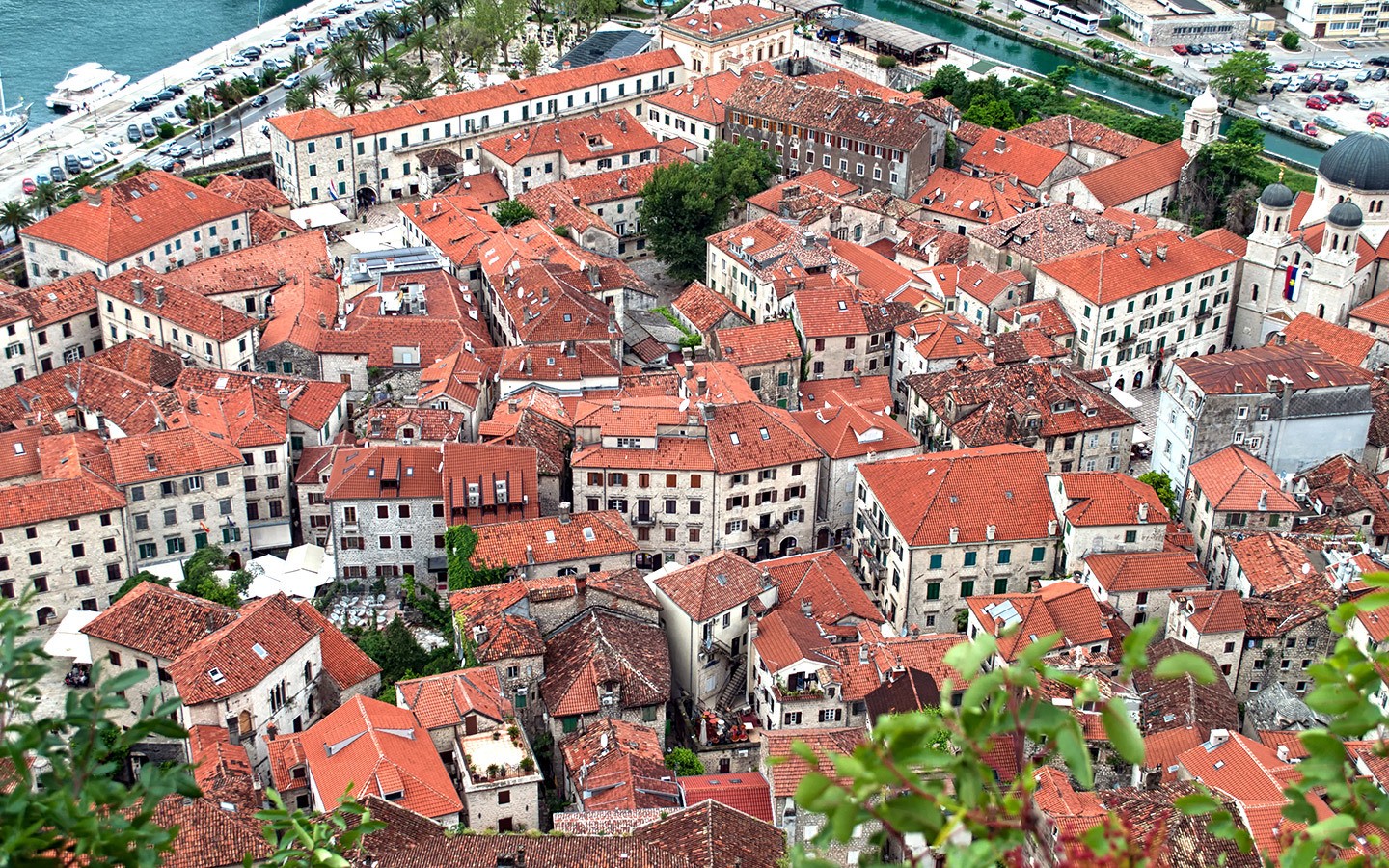 Views down onto Kotor from the city walls

Our first destination was the Church of Our Lady of Remedy, up at 100 metres high. It was built in the 15th century and supposedly healed people of the plague (though I’d expect the climb finished a few of them off before they got up there…). Now 100 metres up doesn’t sound all that much, but it definitely started to feel it when my slow and steady pace got overtaken by a Japanese pensioner and a Spanish woman doing the climb in three-inch heels.

Once at the church we stopped to catch our breath and to take in the views down onto the red roofs of Kotor below, the cruise ship in the harbour and across the whole Bay of Kotor. But from the church you’ve got another 155 metres of climbing to get to the very top. 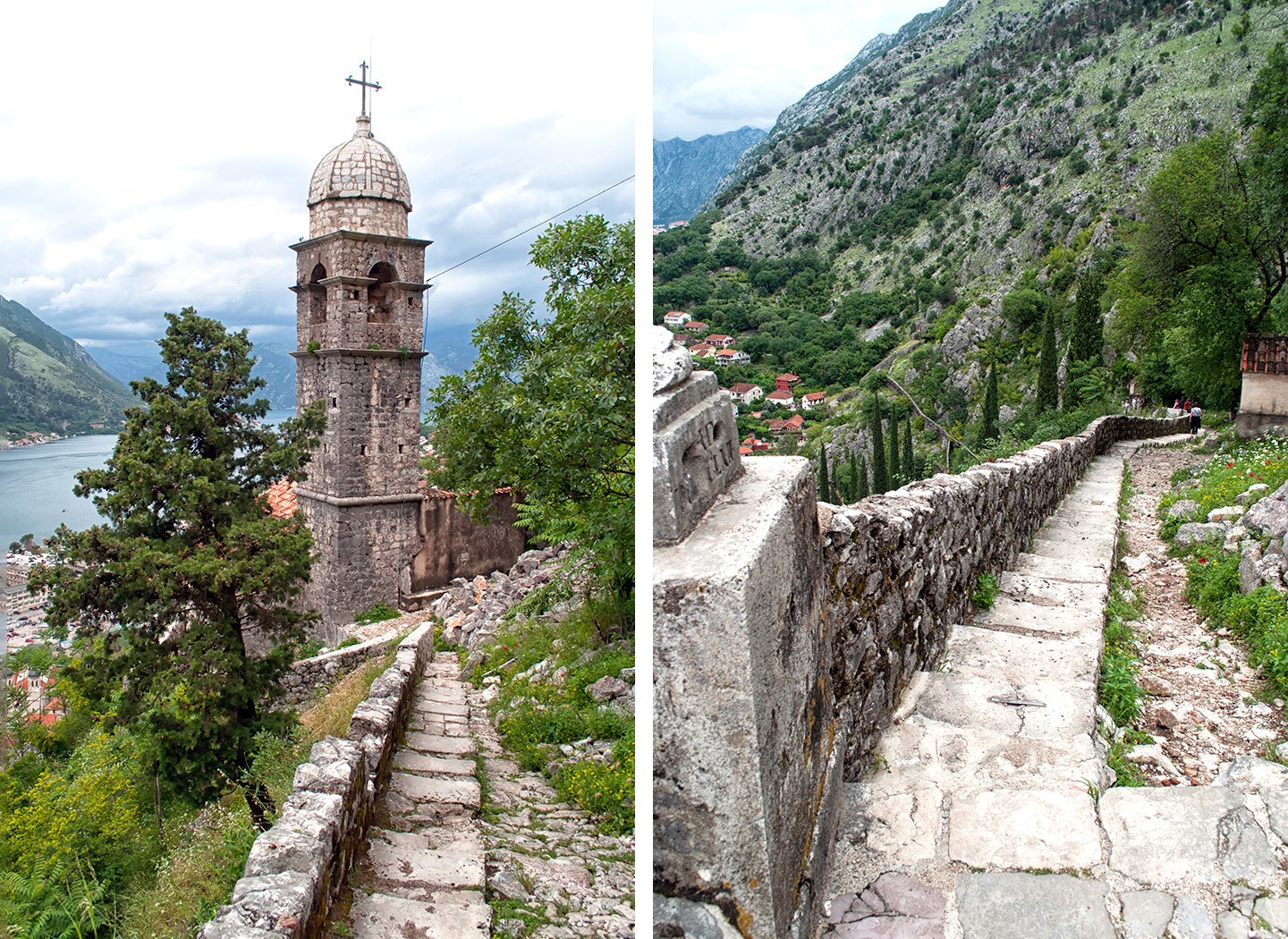 The Church of Our Lady of Remedy

The original Fortress of Sveti Ivan (St John) was built by the Illyrians around the 5th century, but the one there now is a comparatively modern medieval replacement where guards would watch over Kotor below. You can see why when you emerge at the top – the impenetrable mountains and views for miles around mean there’s no way any invaders could creep up on you.

The fortress is crumbling and ruined now but you can’t help but be impressed by the amount of manpower it must have taken to build it up at this height, and the panoramic views. And from the top the only way is down, to a much-deserved beer back in Kotor’s old town. 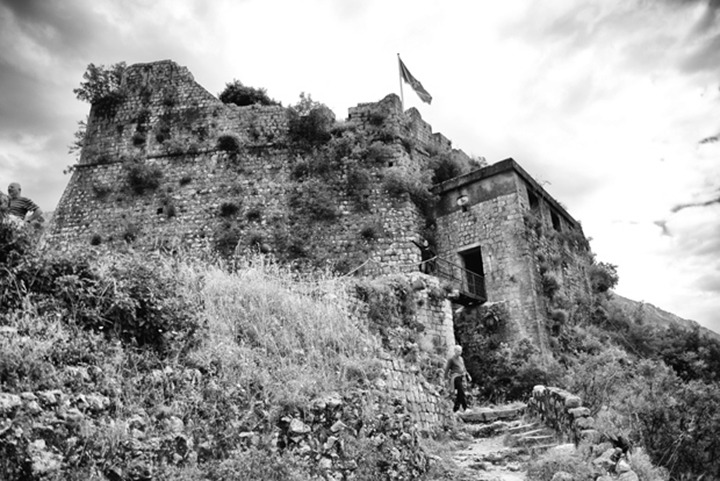 The Fortress of St John

Admission to the Kotor city walls costs €8 between 8am and 8pm from May to September (technically the walls are open 24 hours a day so you could go up before or after then for free). The main entrance to the walls walk is near Kotor’s North Gate. It takes about 90 minutes to two hours to do the journey up and back down. Start early if you’re visiting during the summer as there’s not a lot of shade along the route. And take lots of water – though there are a few enterprising guys with coolboxes selling you cold drinks and beers on the way up. 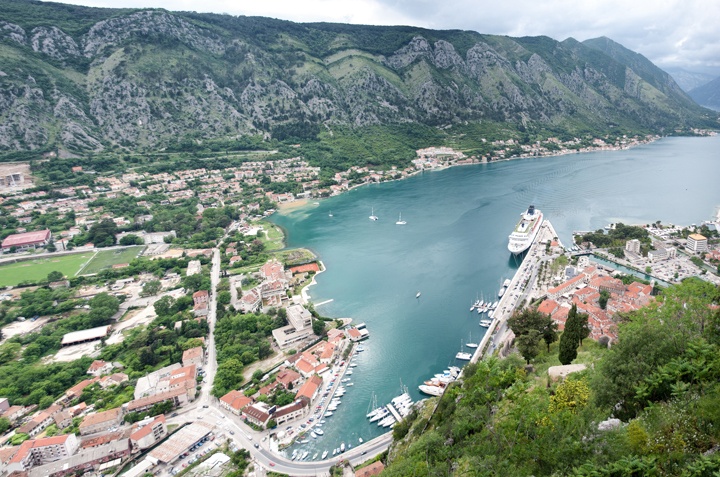 Panoramic view from the fortress of Sveti Ivan

Looking for somewhere to stay in Kotor? 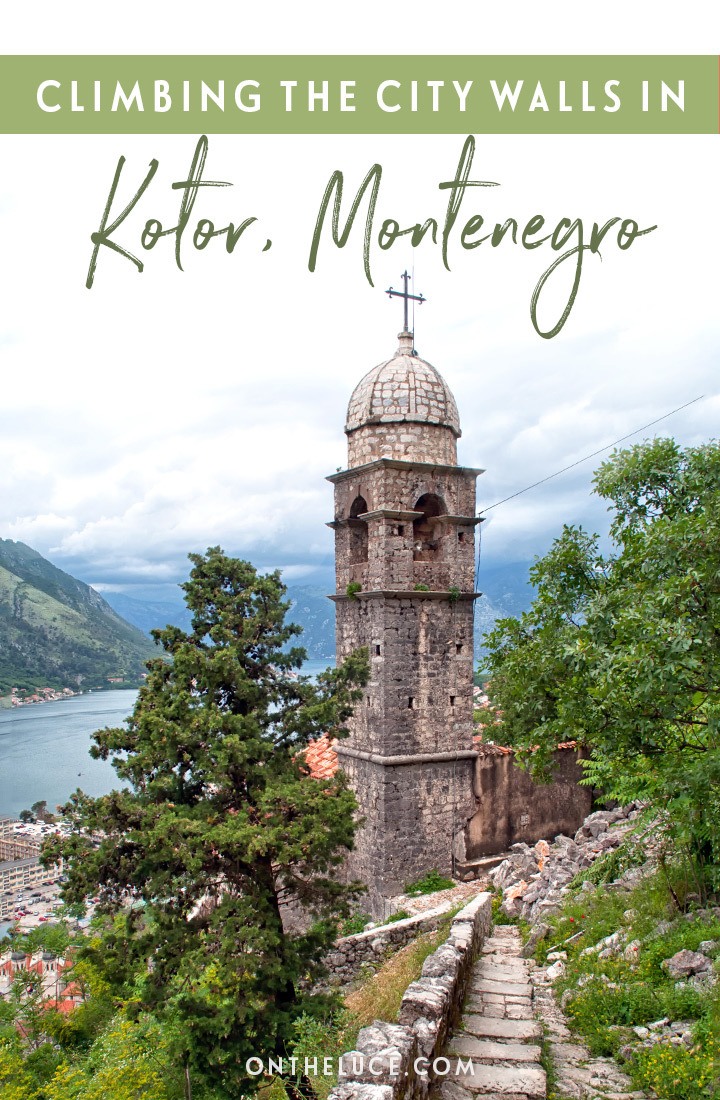 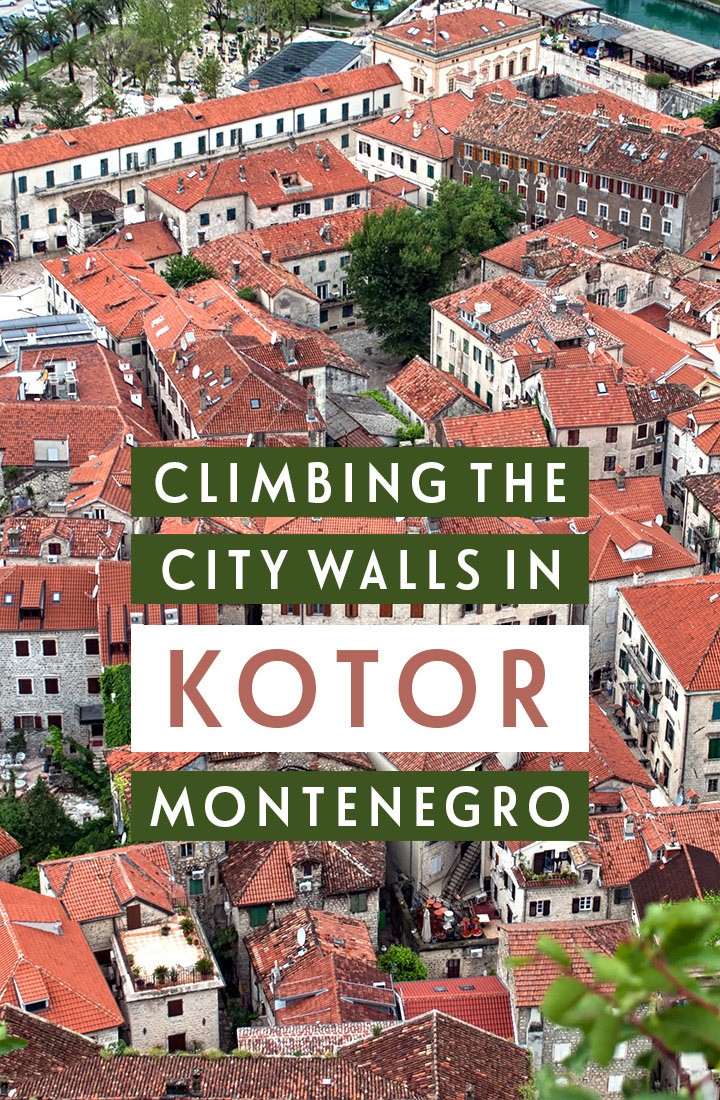 This looks so beautiful. Can't wait to visit.

Thanks for the update!

It's possible to climb another way up to the top which isn't very much visited (and so it doesn't cost anything ;) ) but a little bit more dangerous (altough not much more). Offers a better view in my opinion (walked the "normal" way down).

Yes I'd heard there was another way – we felt a bit more comfortable on the path but one for the more adventurous to try!

Finally off to Kotor in August, after three days of hiking in the North. Let's see if that helps or hinders our ascent haha. Will be bookmarking this!

Sounds brilliant, Kotor is so lovely too – have a great time!

Montenegro looks so beautiful!! It's been on my list for a while, fingers crossed this year is the year! :)

It is such a gorgeous country – hope you manage to make it out there!