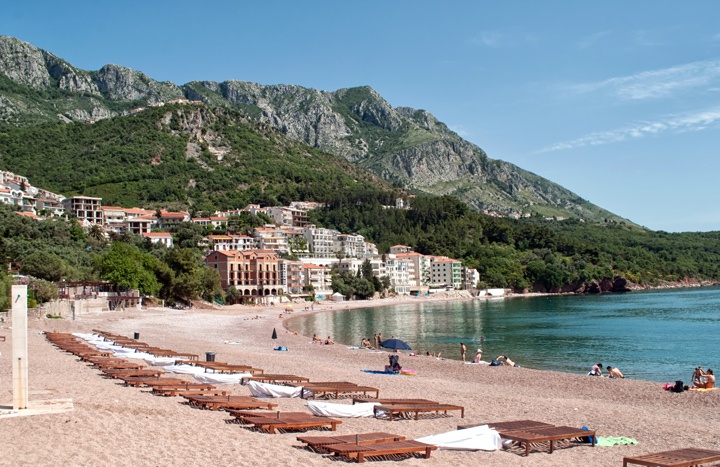 There are plenty of destinations that hold long-term spots on my travel wish-list. Places where I’ve researched what I want to see and pored over photos and blog posts. Places that are just waiting for the right combination of time and money to make the dream trip a reality. And then there are other destinations. Places that I might not know much about or have thought of visiting until circumstances conspire to put them on my travel radar. And once I know about them I can’t believe I hadn’t thought of visiting there before. Montenegro was definitely one of the latter. Croatia was on the list for sure, but Montenegro? I can’t say I knew much about it other than the name and that it was in the Balkans. But when we were looking for somewhere to spend a relaxing week in the Mediterranean in May it kept cropping up. 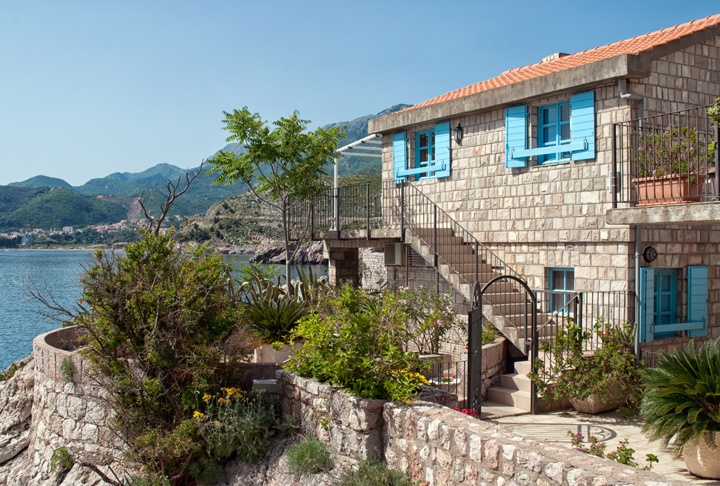 As Croatia’s lesser-known neighbour, Montenegro shares a lot of the same architecture, scenery and climate. But where Croatia’s popularity has rocketed – bringing crowds and high prices along with it in some areas – Montenegro is still relatively unknown. It’s got its own patch of the Adriatic coastline, historic walled towns, beautiful lakes and mountains. Back in the 1970s it was the place for celebs and royalty to visit. But the Balkans conflict put an end to that, and since then the turbulent history and a lack of tourist infrastructure have helped keep it under the radar until now. But once my flight was booked and I started to research what there was to see out there, I could see it wouldn’t stay like that for long. 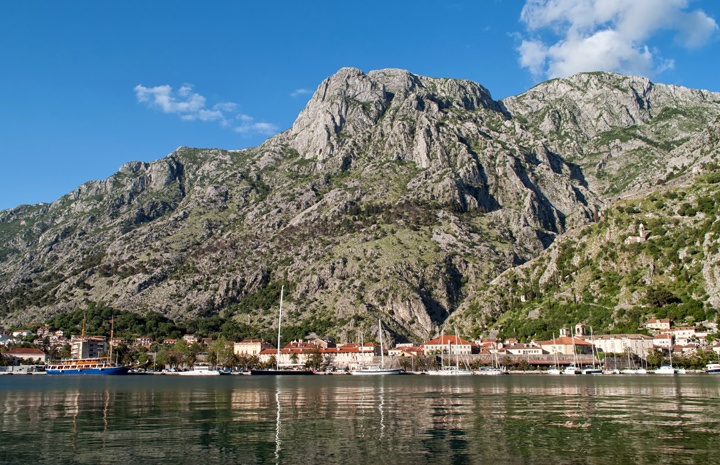 The Bay of Kotor

Montenegro is one of the world’s youngest countries (only beaten by Kosovo and South Sudan). After the break up of Yugoslavia it joined up with Serbia and was part of ‘Serbia and Montenegro’ until it got its independence in 2006. You can still see signs of the communist legacy, like deserted concrete former state-run hotels, and the fact that visitors still have to register with the police. But there’s a lot of redevelopment going on – the road outside our apartments was being relaid, there were new hotels and apartment blocks springing up along the coast. The country is investing hard as it tries to join to European Union. You can already use euros here though – the currency used to be the Deutschmark after it gave up its own currency to fight inflation, so when Germany changed over to euros Montenegro did too. 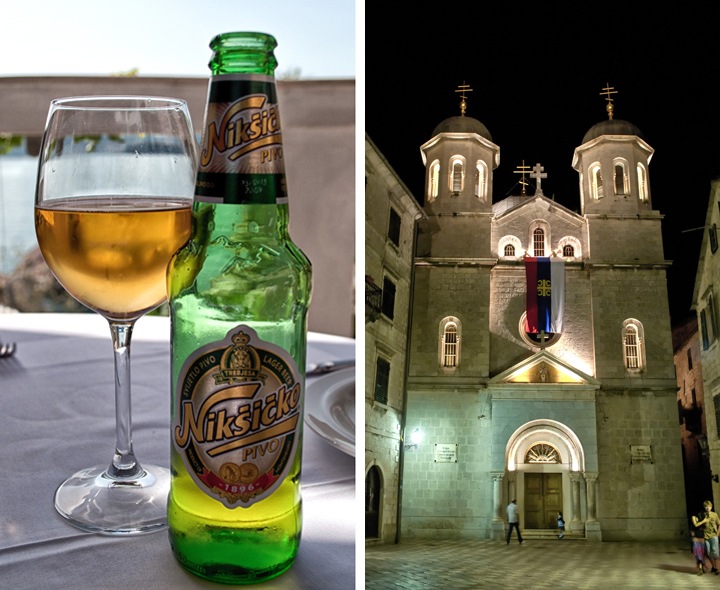 The local beer and the church in Kotor’s old town

Montenegro isn’t very large in terms of area but it packs a lot into its 14,000 square kilometres. Apparently its size causes no end of trouble for cartographers as its name is much bigger than its area, so it’s hard to fit on a map. There’s over 300km of coastline along the Adriatic Sea, with resorts ranging from the party town of Budva to tiny pine-fringed beachside villages. There’s the fjord of Kotor with its red-roofed Venetian-style walled towns. There’s the towering mountains which give the country its name – Crna Gora in Montenegrin or Monte Negro in Venetian–Italian, meaning black mountains. There’s also rafting in the Tara River Canyon, the second deepest canyon in the world after the Grand Canyon. Or fishing in the giant clear expanse of Lake Skadar on the Albanian border. 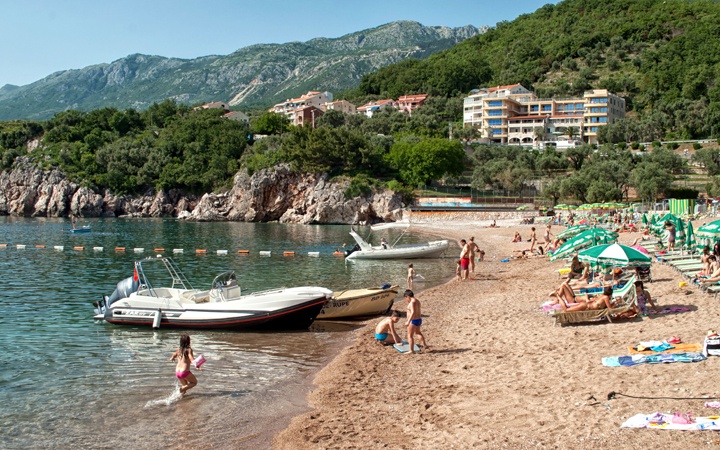 So that’s beaches, historic towns, mountains, lakes and canyons all in an area half the size of Wales. Montenegro has certainly got the looks to become a hugely popular destination. In ten years time I can just picture boutique hotels in the abandoned palazzos, luxury super-yachts filling shiny new marinas, those bumpy mountain roads replaced by smooth new highways. Which is why I’d say go there soon. While you can still see where Montenegro has come from as well as where it’s going.

Is Montenegro on your travel radar? 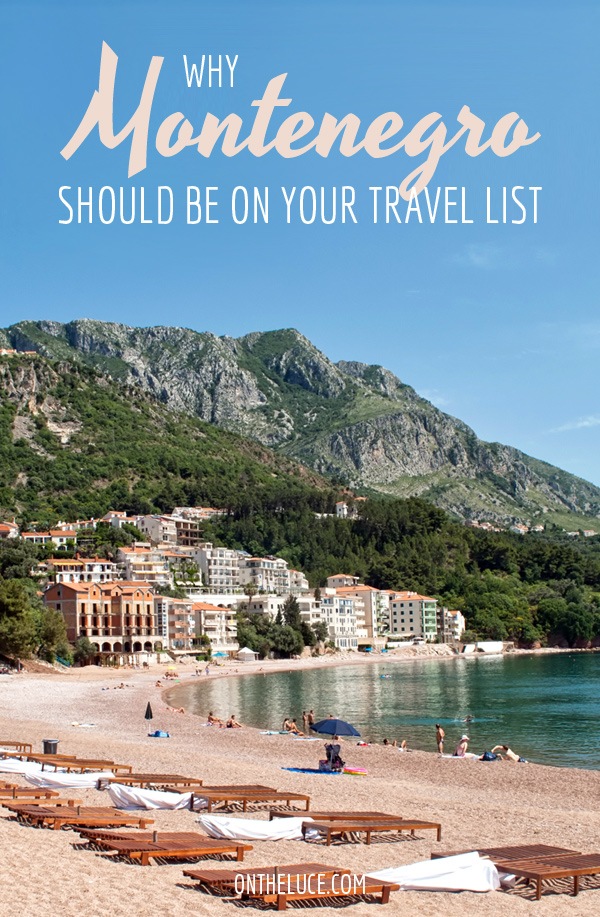 If you go to Montenegro, dont forget to visit the south, between Bar and Ulcinj. We are happy to assist you!

Thanks, hopefully I will get to explore more sometime soon!

I wish there would be more flights to Montenegro from Poland :/ by car its more than 15 hours... Best connections is from Berlin... eh..

That's such a shame – we hired a car and drove from Dubrovnik as there are a lot more flights from the UK to Croatia than to Montenegro.

I have visited Croatia three times now from Australia in my eight European trips since my twenties as fell in love with the place on first trip. The Slovenian(Piran) , Croatian and Montenegrin Riviera is the nicest in Europe and I mean more beautiful than Italian, French Riviera's or the Greek coastline. There are over 1200 islands in Croatia and they are close together so no long strenuous boat trips and the waters are very safe with no sharks or whales etc. Piran, Porec, Rovinj, Opatilja, Plitvice, Sibenik, Krka, Makarska, Pucisca, Bol, Hvar, Vis. Funnily enough most Aussie's I meet do the well known locations first but I'm always amazed at how many come back saying Croatia is their favorite destination.

So much to see! Thanks for the suggestions, there are a few new ones to me there so I'll check them out.

Since I'm going to work and live in Montenegro soon, this post makes me look forward even more to explore & live in this beautiful country!

Fantastic – it's a great place, hope you enjoy exploring!

Thanks – I'm hoping to get back and explore more soon too, it's a beautiful area and changing so fast at the moment.