When I was in Paris this autumn I came across the Promenade Plantée, an elevated park on a former railway line that formed the inspiration for New York’s High Line park. Having seen the original, I had to check out New York’s newer version on my trip out there to see how it compared. The Promenade Plantée – or planted walkway – has been open since 1993, but although the first part of the High Line was only opened in 2009, the railway line it sits on is even older than its Parisian counterpart. 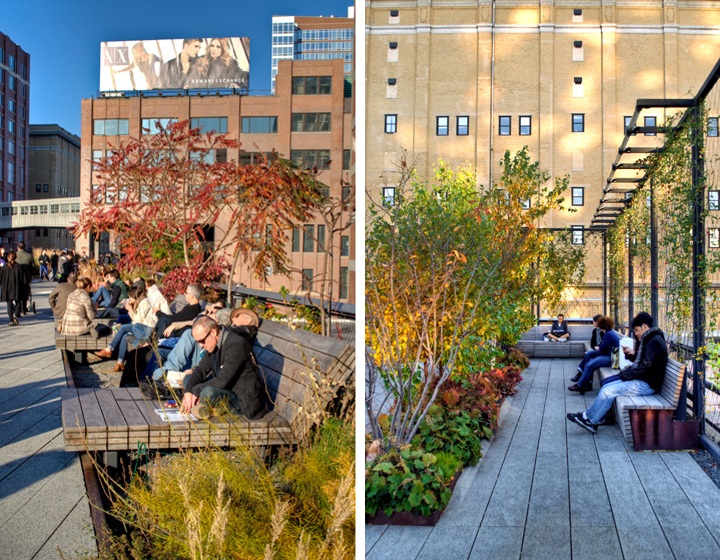 Relaxing in some of the High Line’s seating areas

New York’s High Line railway opened in 1934 to get the trains off the streets of Manhattan’s industrial area. Collisions between trains and street traffic were so bad that 10th Avenue got the nickname ‘Death Avenue’, and the railroad company had to employ men on horses had to ride in front of the trains waving flags to warn people. So a new elevated railway line was built for freight running through the middle of the city’s blocks and linked to warehouses and factories. But by the 1960s more traffic was running on the new interstates, and parts of the track started to be abandoned, taken over by grasses and shrubs.

By 1980 the last train had run – the final cargo was three carloads of frozen turkeys – and a few years later plans were afoot to knock the line down. But a group of local residents formed the Friends of the High Line and lobbied for years to preserve it and to open it up to the public. They eventually managed to overturned the demolition order and convince the city to support their idea of a ‘park in the sky’. The first section of the park opened in 2009 and a second part stretching another 10 blocks opened in June 2011. 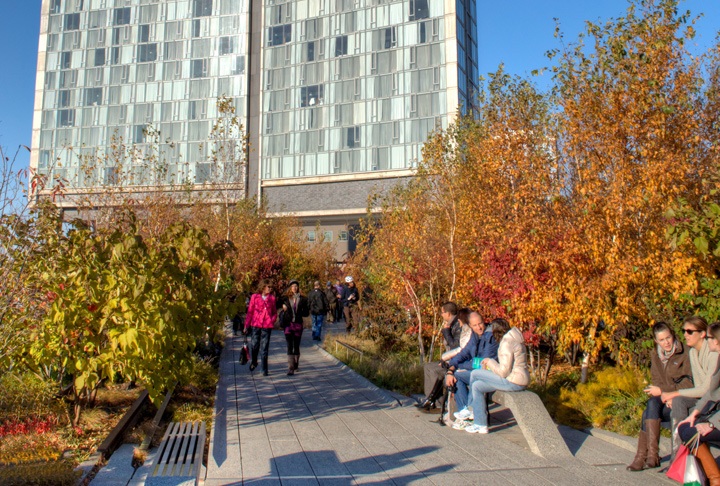 The south end of the High Line starts on Gansevoort Street in the Meatpacking District, which is where I set off from. Entrances are dotted along the route, with lifts and stairways transporting you from the busy city streets below up into an oasis of autumn colour. Whereas I only passed a few people walking along the Promenade Plantée, on an unseasonably sunny November Sunday the High Line was packed. In Paris there were a few benches where people sat relaxing or reading, but in New York there’s a much more social feel. Seating areas ranged from reclining wooden day beds where people sat chatting, working, reading and socialising in the sun, to hidden nooks in quiet tree-lined corners.

The Meatpacking District had already been redeveloped into a fashionable neighbourhood, but the High Line has brought massive investment into the area. As you walk, you’re surrounded by gleaming glass and steel apartment buildings, new high-end hotels and expensive boutique shops. You can even stay right above the High Line at the Standard Hotel, whose floor-to-ceiling glass bedroom windows have been popular with exhibitionists – not what you expect to see on an innocent walk in the park! 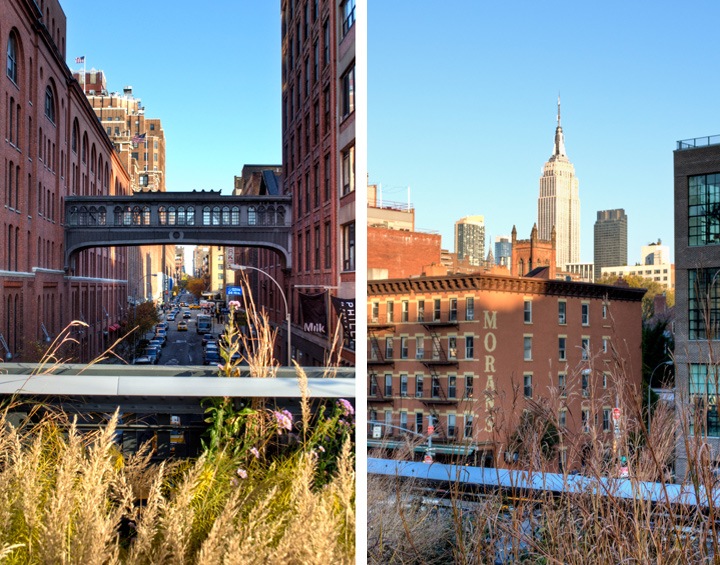 Views from the High Line

The Promenade Plantée was lined with carefully manicured trees and shrubs, but the High Line has a wilder, more natural feel. The same vegetation that grew wild there for years has been replanted, with areas of native grassland and wildflowers. I really liked how the High Line’s designers have incorporated reminders of its former history into the park. Portions of the old track can be spotted among the plants and you can see some of the original art-deco steel railings.

The Promenade Plantée feels like more of an escape from the city with its trees sheltering you in your own little world, but here the city is part of the park, with viewing platforms looking out over it. You get great views across Manhattan and the Hudson River, with glimpses of famous landmarks like the Empire State Building and the iconic yellow taxis rushing past below you. 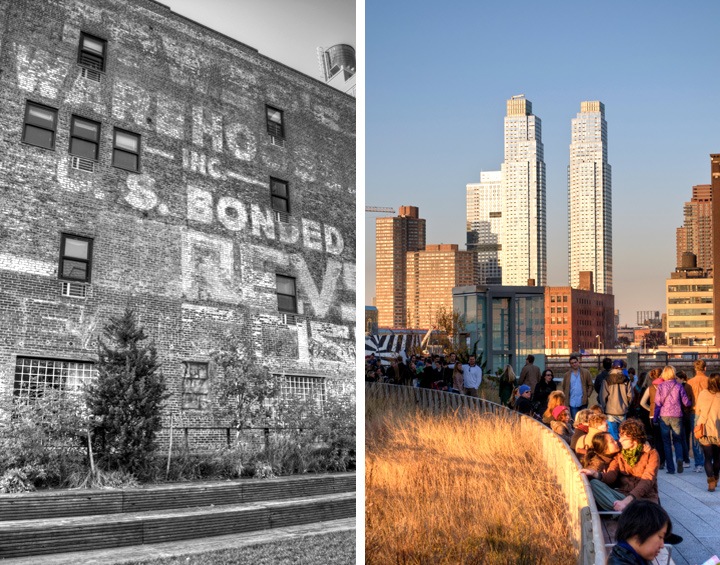 At the moment the High Line ends at West 30th Street, but there’s a third phase planned – curving towards the Hudson River and ending up at the Hudson Rail Yards. Designs are currently being put together as part of a huge redevelopment of the area. But for now you’ve got 1.5 miles of park to wander along, joining a mix of New Yorkers and tourists. Just as the Promenade Plantée is a reflection of the low-key Parisian style, the art installations, coffee carts, sustainable green design, performances and events on the High Line tell you a lot about modern New York life, and are a great way to get in among it.

Isn't this a great example of recycling on a gargantuan scale? They've done something similar to an old railroad trestle up here in the Hudson Valley; now we have the Walkway Over the Hudson. Much better than tearing down these old structures!

I hadn't heard of either New York's High Line or Paris' Promenade Plantée prior to reading your post - now I want to see both!

Great post!. Nice pictures. I see you did some research.

There is talk about expanding the High Line to go all the way to Ozone Park - - in Queens. That plan would include a bicycle path. If it should come to pass it will be several years away.

Hi Gerard, thanks. Wow, that would be amazing to have it running all through the city like that, I look forward to seeing if it happens.

LOVE your pics. I was there last year in March and this year in July (if I'm not mistaken). Couldn't get these colors though, autumn is amazing, that's for sure

Thank you. It was a bit of lucky timing ending up out there just as the leaves were turning, the colours were just stunning.

Fantastic entry! Love the comparison of the two. Looks like you had fantastic weather!

Thanks, it was amazing how different they were. And the weather gods have definitely been smiling on me this year, lets hope it lasts for 2012!