Travelling from Cape Town to Johannesburg by train – a trip through the heart of South Africa on board the Premier Classe train, the overnight rail journey that’s a budget alternative to the Blue Train.

Please note: The Premier Classe train stopped running in 2020 and it’s unsure if and when it will start again. The information and trip report below is based on a journey taken before the pandemic.

South Africa is home to one of the world’s most famous and luxurious train journeys. The Blue Train is the five-star way to travel across the country, but it’ll set you back at least 18,000 ZAR (£880/$990) one-way. If that’s a bit steep, there’s a normal, no-frills overnight passenger train between Cape Town and Johannesburg – the Shosholoza Meyl.

But there’s also a third option, South Africa’s budget-luxury Premier Classe train. Premier Classe comes with some of the same perks as the Blue Train – private cabins, three-course meals and a Champagne send-off – but for a more budget-friendly price. So how does it compare and what’s the journey from Cape Town to Johannesburg by train like?

How long does it take to travel from Cape Town to Johannesburg by train?

What’s the difference between the Blue Train and the Premier Classe train?

But the big difference (other than the price) is the facilities on board. Premier Classe trains use standard South African Railways sleeping cars which have been refurbished to make them more luxurious. The Blue Train is another level with a choice of luxury compartments with an en-suite bathroom and deluxe compartments with a full-size bath.

The Blue Train comes with lots of extras – butler service, air conditioning, observation car, shop and several lounges. And all food and drink is included on the Blue Train, with fine-dining cuisine and local wines, but you pay extra for alcohol on the Premier Classe.

With prices starting at 18,000 ZAR (£880/$990) per person in low season, the Blue Train is a real bucket list trip. But the Premier Classe is very different – an affordable way to travel across South Africa in comfort if you’re not in a hurry.

What’s it like on board the Premier Classe train?

My journey from Cape Town to Johannesburg by train started at Cape Town station at 8am, where we were shown to the Premier Classe lounge (which is shared with Blue Train passengers). After checking in, our bags were taken off us and tagged with our cabin number ready to be delivered to our room, and we were given tea and scones.

The train is a mirror image, with a kitchen in the middle, then a dining car and lounge bar on each side, followed by the cabins with toilets and showers at the end of each carriage. The Premier Classe trains aren’t hugely modern but they’re clean and well maintained.

The cabins have been converted so what would have originally been a four-person cabin now sleeps two, and what was a two-person cabin is now a single. So that means there isn’t an expensive single supplement if you’re travelling on your own, and nobody has to navigate climbing a ladder into a bunk bed on board a moving train.

Inside we had two seats/beds, a table which lifted up to reveal a sink and a storage area above the door for bags (the doors don’t lock from the outside so we kept valuables with us). You’re also given towels, dressing gowns, slippers, toiletries and bottled water.

The journey from Cape Town to Johannesburg by train

As we pulled out of Cape Town, the passengers gathered in the bar for snacks and glasses of bubbly as we watched Table Mountain disappear into the distance. The other passengers on board the Premier Classe train were mainly South Africans along with a few international tourists, and a mostly older crowd of couples and small groups of friends.

Back in the cabin, I abandoned plans to read and was transfixed by the view out of the window. We went from farmland and fields of ostriches through the vineyards around Paarl, then on through the Nuwelkoof Pass into the mountains. The landscape got rockier and drier as we travelled, changing from shades of green to gold and red.

Our cabin steward called in to give us the menu and allocate us a table for meals – you can have a table for two or share a larger table. There’s a huge amount of food included, with a three-course lunch followed by afternoon tea and a four-course dinner, then breakfast and morning tea the next day. The lounge also does a good selection of drinks.

The bar menu featured a selection of local wines for 80–90 ZAR (around £4/$5). You can buy a bottle of wine and the bar steward will look after it for you, so you can just go and get a top up when you want or take it with you to lunch or dinner.

At 12pm it was time for lunch so we headed to the dining car. We sat next to a South African couple in their 60s on their third Premier Classe trip. Over lunch (vegetable terrine, Chicken Kiev and strawberry cheesecake) we talked to them about life in South Africa and how much things have changed for the country over the last 10 years.

By the time we finished lunch the train was out in the Karoo, the vast expanse of empty semi-desert landscape at the heart of South Africa. But there are towns out there – we stopped in Beaufort West to stretch our legs and made an unscheduled stop for the engineers to tinker with the train, but 20 minutes later we were on the move again.

The sky started to glow as the sun set behind us, disappearing below the horizon as we headed back to the dining car for dinner (afternoon tea too was a step too far!). The kitchen staff do an amazing job cooking up multi-course meals in a tiny space for so many people. Dinner was another feast of tomato soup, fish, lamb, chocolate mousse and cheese.

Pretty much stuffed by now, we finished our wine in the lounge before heading back to our cabin. Our beds had been made up for us so we crashed out for the night. Beds were comfortable but the train stops and starts as it travels through the night and lurches around a bit, so we did wake up a few times (ear plugs are a good idea for light sleepers).

Just before 7am I woke up, opened the curtains and sat watching the scenery go by. The landscape had changed again, now back to green with farms, roads and more signs of life. There’s a shower at the end of each carriage, and it’s a bit of a weird feeling washing while you’re moving around but it was warm and had decent water pressure.

Breakfast is served from 7am–9am so you can wander down when you’re ready. We carried on the whole ‘eat until you burst’ theme with juice, yogurt and cereal followed by eggs, bacon, sausages and toast. The train is scheduled to arrive into Johannesburg at 11am so we packed up our cabin – which had been turned back into seats – ready to go.

The last stretch of the journey through the suburbs of Johannesburg seemed to take the longest, but we arrived into Park station spot on at 11.05am. From there you can catch the Gautrain around the city, to OR Tambo International Airport, or out to Pretoria.

Although we were on time, the Premier Classe train is known to have delays, so allow plenty of extra time if you have a flight to catch. But if you have time to spare and want to relax, see South Africa’s landscapes, chat to a mix of locals and travellers, and eat practically non-stop, the journey from Cape Town to Johannesburg by train definitely beats the plane.

Looking for somewhere to stay in Cape Town?* 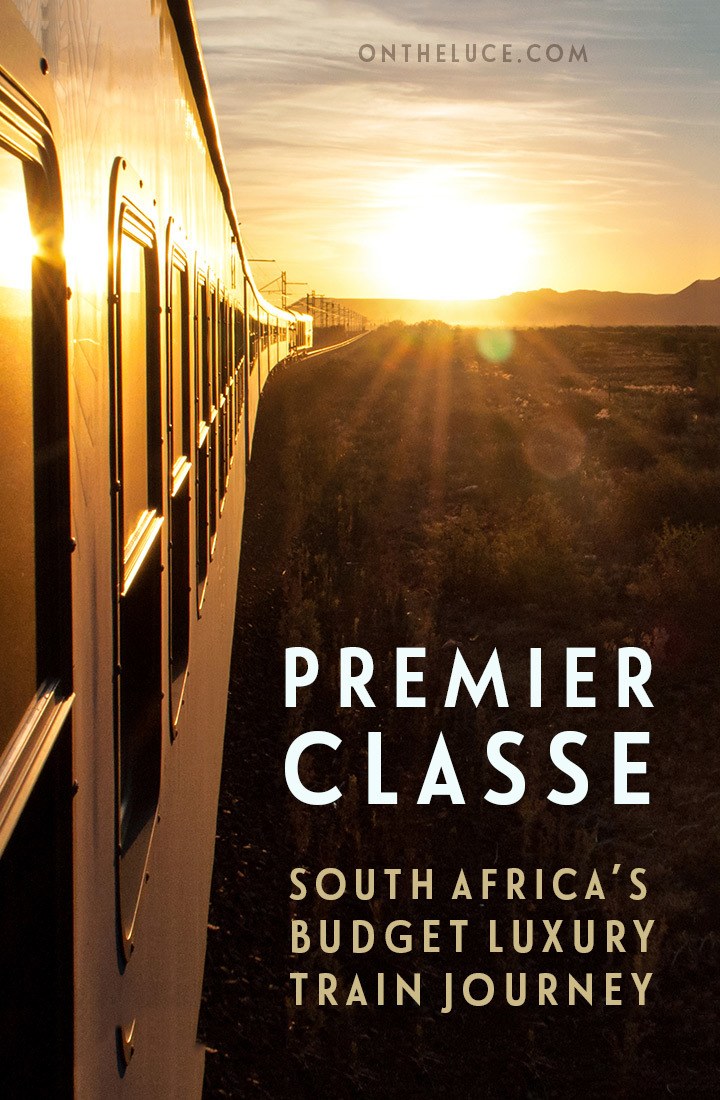 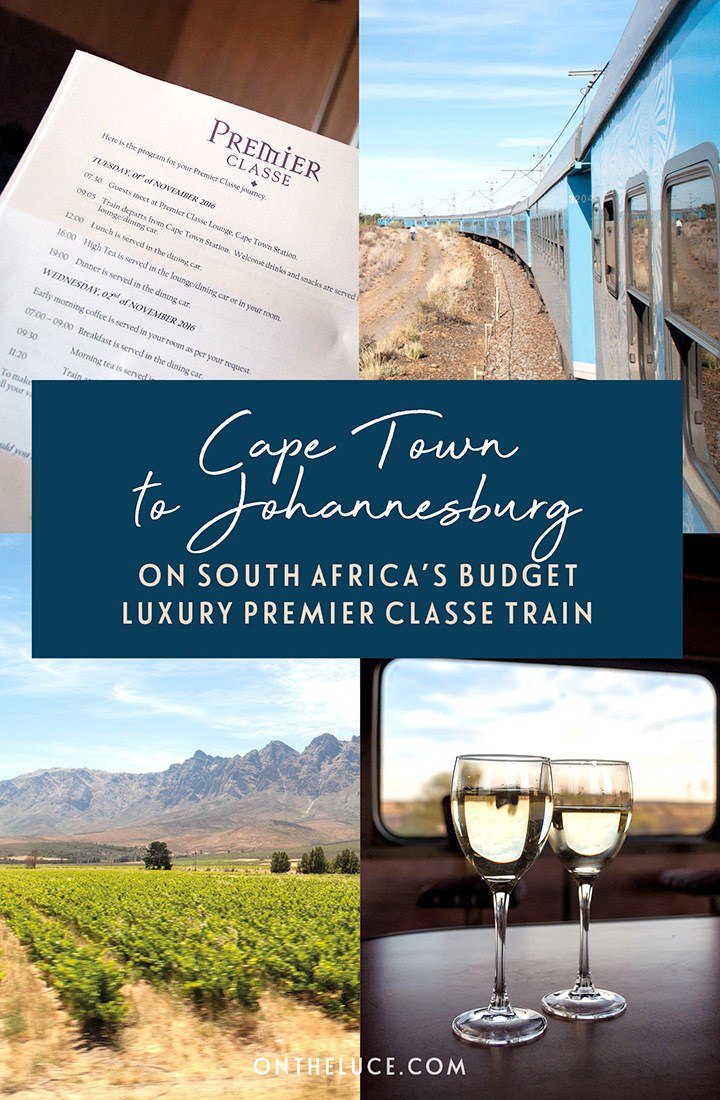 What does it cost to visit South Africa? 10-day budget breakdown

Visiting Cape Town on a budget

Does the train stop at any place for exploring (like Kimberly in the case of the Blue Train), or to stretch one's legs?

We did make a couple of brief stops (one scheduled and the other to check on an issue with the train) but only really long enough to stretch your legs not to explore.

I have just booked the premier class trip from Cape Town to Johannesburg, for February 2020. I read your review and found it extremely helpful . Happy travels.

We did the same journey in January 16. I love your review, because it is so balanced. Our train was delayed by around 4 hours and I have also heard that this is not unusual, but the journey is peaceful and relaxing and there are some amazing sights to see. We found the cabins private and comfortable, though as you mentioned, it was a bit rocky from time to time during the evening. We would recommend it too :)

Thank you! And glad you enjoyed your trip – I found it such a relaxing way to travel and really enjoyed soaking up the views.