A weekend in Victoria, British Columbia: A 48-hour itinerary

Canada had topped my travel wishlist for years, so as we boarded our last flight the excitement started to grow. As we left Vancouver behind, down below I could see pine-covered islands dotted in shimmering waters, followed by my first sighting of Vancouver Island. And I couldn’t think of a better way to start my Canadian adventures than with a weekend in Victoria, the island’s biggest city and the capital of British Columbia,.

AD: My visit was hosted by Canada Keep Exploring but all views are my own.

How to spend a weekend in Victoria

Victoria is known for being one of Canada’s most English cities, so I was expecting to feel at home. But I found it mixed European influences – Gothic style at the legislature building, French Renaissance at the Empress hotel, Ancient Greece at the ferry building. Today it’s a relaxed, vibrant city on the edge of an island packed with spectacular natural scenery.

It has a bit of everything – history and culture, parks, great food and drink. Add in a temperate climate, with sunny spring days during my visit, and a compact and walkable city centre and you’ve got an ideal city break. There’s plenty to see in the area, but if you’re on a tight schedule, here’s a 48-hour itinerary for the perfect weekend in Victoria.

Once you’ve checked in to your hotel, head to the harbour. The water is alive with boats – everything from huge cruise ships and luxury yachts to water taxis and dinghies. Victorians seem to spend as much time on the water as they do on land. Start your trip off with a taste of city life on land and sea with a walk along the waterfront to Fisherman’s Wharf.

The path passes the ferry terminal and flower-filled Laurel Point Park. On one side of you boats glide past and seaplanes come in to land, and on the other there are smart waterside apartments and hotels. About 15 minutes’ walk away is Fisherman’s Wharf, with colourful floating homes mixed with food stalls, fishing boats and the occasional seal.

From Fisherman’s Wharf, take the watery route back to the inner harbour on board one of the Victoria Harbour Ferries. These dinky green and white ferries look like toy boats but will whisk you back to the harbour in 10 minutes, complete with commentary from the captain (single fare C$7.50 adults, C$5 children). Back in the inner harbour, the water’s edge is lined with stalls selling crafts and food, as well as buskers and street performers.

Follow the path in the opposite direction, past the seaplane terminal and lines of yachts to Canoe Brewpub for dinner. This microbrewery and restaurant in a 100-year-old electric power-plant building has a big waterside patio perfect for sunny evenings. They brew their own lagers and ales, served alongside tasty burgers, steaks and local seafood.

Grab a coffee in the harbour, but save your appetite for The Pedaler’s ‘Eat, Drink, Pedal’ cycle tour (11am–3pm, C$109 per person). They run a range of themed bike tours of Victoria to introduce visitors to their favourite local haunts. Eat, Drink, Pedal is all about the city’s culinary gems. But before you eat, the tour starts with an introduction to the city.

The cycle route takes in Beacon Hill Park first – 200 acres of gardens, ponds and trails along with a petting zoo and water park. It was made a protected area in 1858 by Sir James Douglas, the governor of Vancouver Island, and is a favourite spot for Victorians to escape city life. It’s also home to a 39-metre-high totem pole which was once the tallest in the world (it’s since been demoted to number four but is still a pretty impressive sight).

After the exercise, it’s time to eat. Each tour varies slightly, so they adapted their stops to make it gluten-free for me. Stops normally include Zambri’s, with Italian food so authentic it’s been certified by the Italian Chamber of Commerce. They’ve won awards for Victoria’s best pizza – and the chef whipped me up a delicious prosciutto salad.

Then there’s Cold Comfort ice creams who use organic, local produce to make quirky flavours like cardamon and tamarind. A new flavour is developed each week with over 400 different combinations so far. They also produce rich, creamy dairy-free ice cream using coconut milk.

After getting a taster of Victoria’s history on the cycle tour, head back to the harbour to find out more. You can take a tour of British Columbia’s Parliament to explore this ornate waterfront building, which was officially opened in February 1898 after five years of construction. Tours are free, but you need to sign up outside in advance, and they also cover the province’s history and explain how Canada’s political system works.

Or head next door to the Royal BC Museum (entry C$27 adults, C$19 for students/seniors). It’s a fascinating place that splits the story of British Columbia into three strands. There’s the natural history of the landscape and wildlife, the First Nations’ history of Canada’s indigenous peoples, and the modern history of the province. There are also temporary exhibitions on different subjects – the current one is all about Orcas – and an IMAX cinema.

After filling up with culture, it’s time to eat again. Head across the harbour for dinner at Little Jumbo restaurant, tucked off Fort Street (look out for the neon elephant sign). It’s a cosy place, serving inventive cocktails and a small but perfectly formed menu.

They use local produce to create delicious dishes like braised lamb shank and grilled lingcod, and there’s also a C$40 tasting menu. Then if you wander back to your hotel along the inner harbour after dark, you’ll see the legislative building sparkling with the light of over 3300 bulbs, which looks extra beautiful when it’s reflected in the harbour waters.

Have a leisurely breakfast at John’s Place, serving North American classics like pancakes and waffles, with a Canadian twist from maple-smoked bacon. Then head to the harbour for a whale-watching trip with Prince of Whales. Vancouver Island is one of the best places to spot these magnificent creatures, especially when the salmon are migrating.

Orcas, humpback and minke whales all live in the coastal waters as well as seals, sea lions and porpoises. Three-hour tours depart at 9am, 12.15pm and 3.30pm in summer (C$130 adults, C$95 under 18s). You can choose between a zodiac or larger boat, with a naturalist on board. And if you’re not lucky enough to see any whales on your trip, the company let you take another tour for free – even if you don’t go back to Victoria until years later.

Finish your weekend in Victoria with afternoon tea at a city institution – the Fairmont Empress. This historic hotel was built in 1908 for Canadian Pacific’s steamship passengers and became the city’s most famous building. Shockingly it was almost torn down in the 1960s, but was saved and restored to its former glory and is now welcoming guests again.

Their Royal Afternoon Tea (C$82 per person, with vegan and gluten-free options) comes with dainty sandwiches and cakes as well as their own Empress Tea, blending flavours from Kenya, Tanzania, South India, Assam, Sri Lanka and China. Or if you prefer something with more kick, try an Empress 1908 cocktail, made with tea-infused vodka, lemon and egg white.

When to visit Victoria

Victoria has some of the mildest weather in Canada, and is sunnier and drier than neighbouring Vancouver. The summer months are peak season on Vancouver Island. Sunny days with average highs of 73ºF/23ºC make it a great time to get outdoors, there are also lots of summer festivals on the island and you can see the city’s gardens in full bloom.

Summer is the busiest and most expensive time for a weekend in Victoria, so book accommodation well in advance. Spring and autumn are pleasant with average temperatures of 48–58ºF/9–14ºC. Spring is usually fairly dry, but rainfall starts to rise towards late autumn. And for the best opportunity to see whales, time your visit between April and October.

Winters in Victoria are mild with average daytime highs of 45ºF/7ºC and lows above freezing, but November and December are the rainiest months, so pack an umbrella and waterproof.

How to get to Victoria

Victoria is located on the southern tip of Vancouver Island in British Columbia, around 76 miles southwest of Vancouver city. You can reach Victoria by air or sea. BC Ferries carry both car and foot passengers from Tsawwassen outside of Vancouver. The journey across the Strait of Georgia to Swartz Bay near Victoria takes 1 hour 35 minutes. Tsawwassen is a 45-minute drive from central Vancouver, or an hour by a combination of train and bus.

You can also travel to Victoria by ferry from Port Angeles, Anacortes or Seattle (foot passengers only) across the border in Washington State, USA. Victoria has an international airport. Or for something a bit more adventurous, you can take a floatplane to Victoria from Vancouver harbour with Harbour Air. The journey takes around 35 minutes and you get some great views of the city, the coast and the Gulf Islands along the way.

Where to stay in Victoria

The inner harbour is the heart of Victoria, and you can’t get much closer to it (without getting your feet wet) than a stay at the Hotel Grand Pacific*. It’s right next to the legislative building and a few minutes’ walk from the ferry terminal and Victoria’s main attractions. The grand, 10-storey building has a pool, hot tub and spacious rooms with balconies looking out towards the Olympic Mountains in one direction and the harbour the other.

Or why not have a luxury weekend in Victoria with a stay at the iconic, five-star Fairmont Empress*? From its 250,000-crystal chandelier to its in-house gin, the hotel is overflowing with glamour, but a recent revamp means facilities are right up to date. This huge 464-room hotel has a pool, spa and fitness centre, shops, bars and restaurants. And if you’re blowing the budget, stay on the Gold Floor for cocktails, canapés and terrace views.

Looking for somewhere to stay in Victoria?* 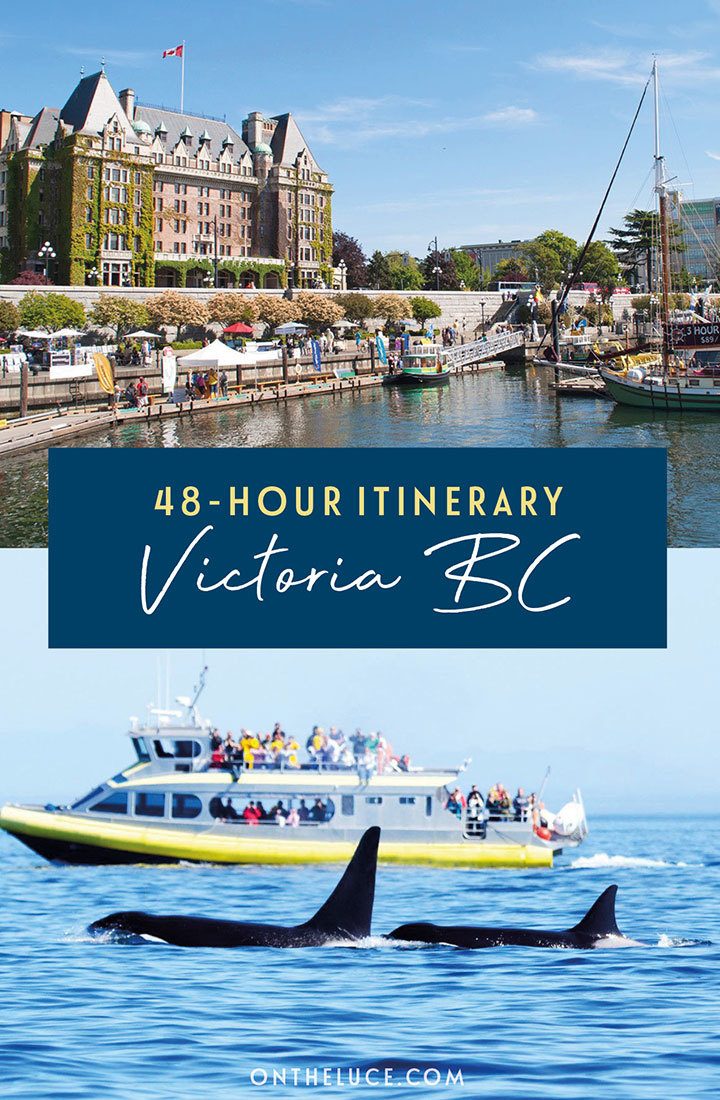 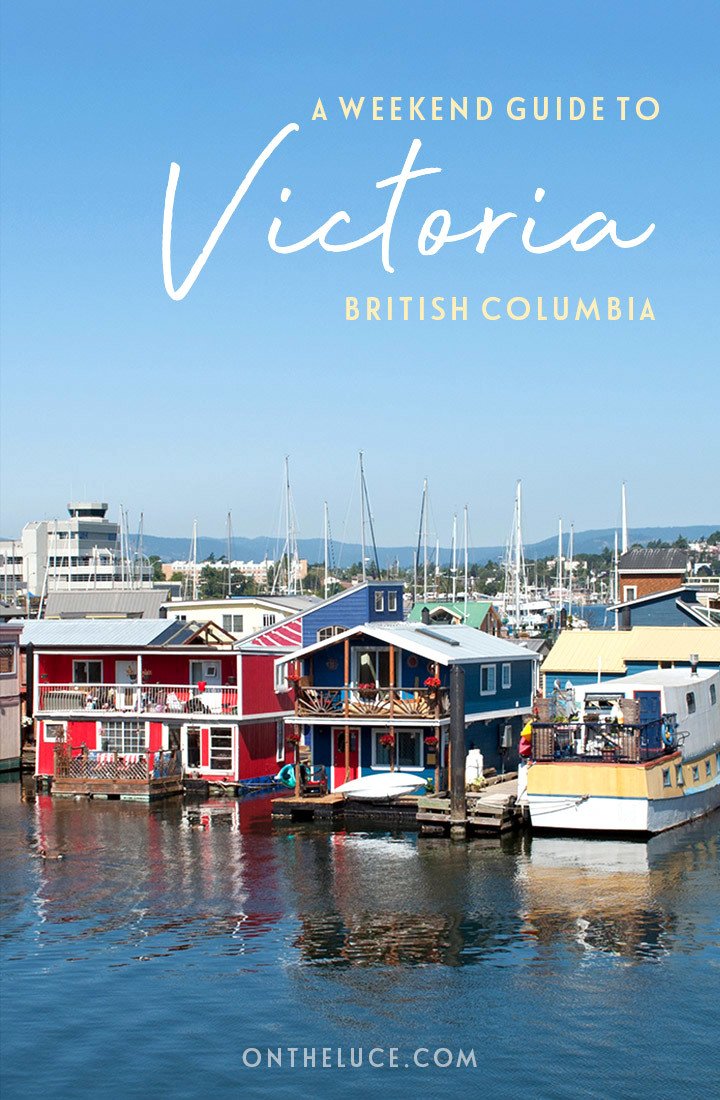