A Vancouver Island road trip, Canada: From the tip to the top 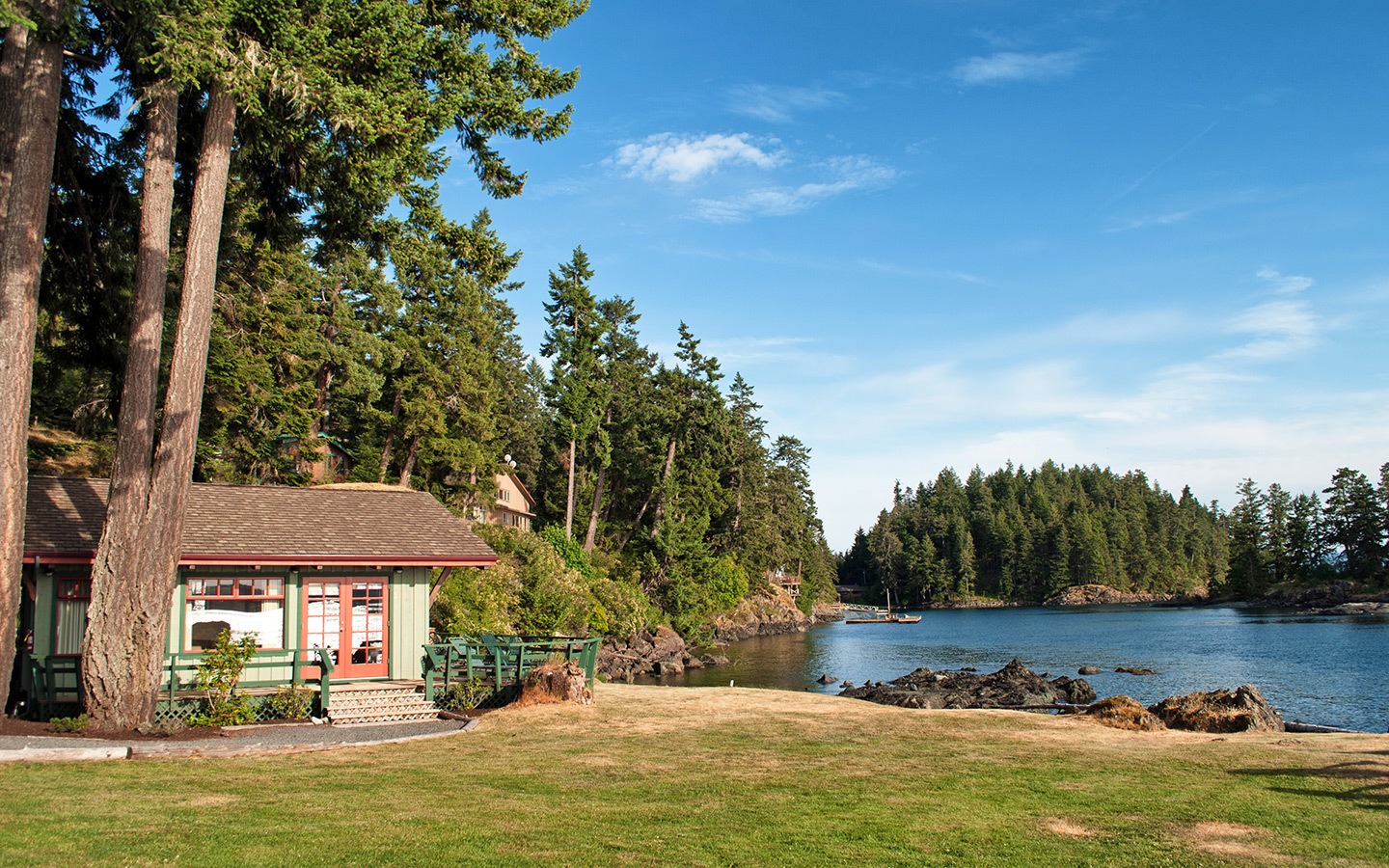 Looking at a map of Canada, Vancouver Island isn’t more than a dot off the coast of British Columbia. But this is Canadian scale – where everything’s bigger than it looks. In reality it’s the largest Pacific Island east of New Zealand, stretching 290 miles from north to south.

In this part of the world you can get almost anywhere by air – seaplanes mean you don’t need an airport or even a runway. But if you flew over you’d miss out on the island’s mix of arty small towns and wild landscapes, from mountains and lakes to beaches and rainforests. So instead we decided to explore the east coast on a Vancouver Island road trip, travelling from the tip to the top of the island, and featuring a selection of the best things to do on Vancouver Island.

After leaving Victoria we started our Vancouver Island road trip by following the Trans-Canada Highway north to our first stop at Blue Grouse Winery (34 miles/45 minutes). Canada isn’t the first country you’d think of for wine-making (apart from the ice variety), but this part of the island has a growing number of wineries. It’s in the extremes for grape-growing, but as well as Vancouver Island having Canada’s mildest climate, the Cowichan Valley is 10 degrees warmer than Victoria – its name even comes from a First Nation’s word meaning ‘warm land’. 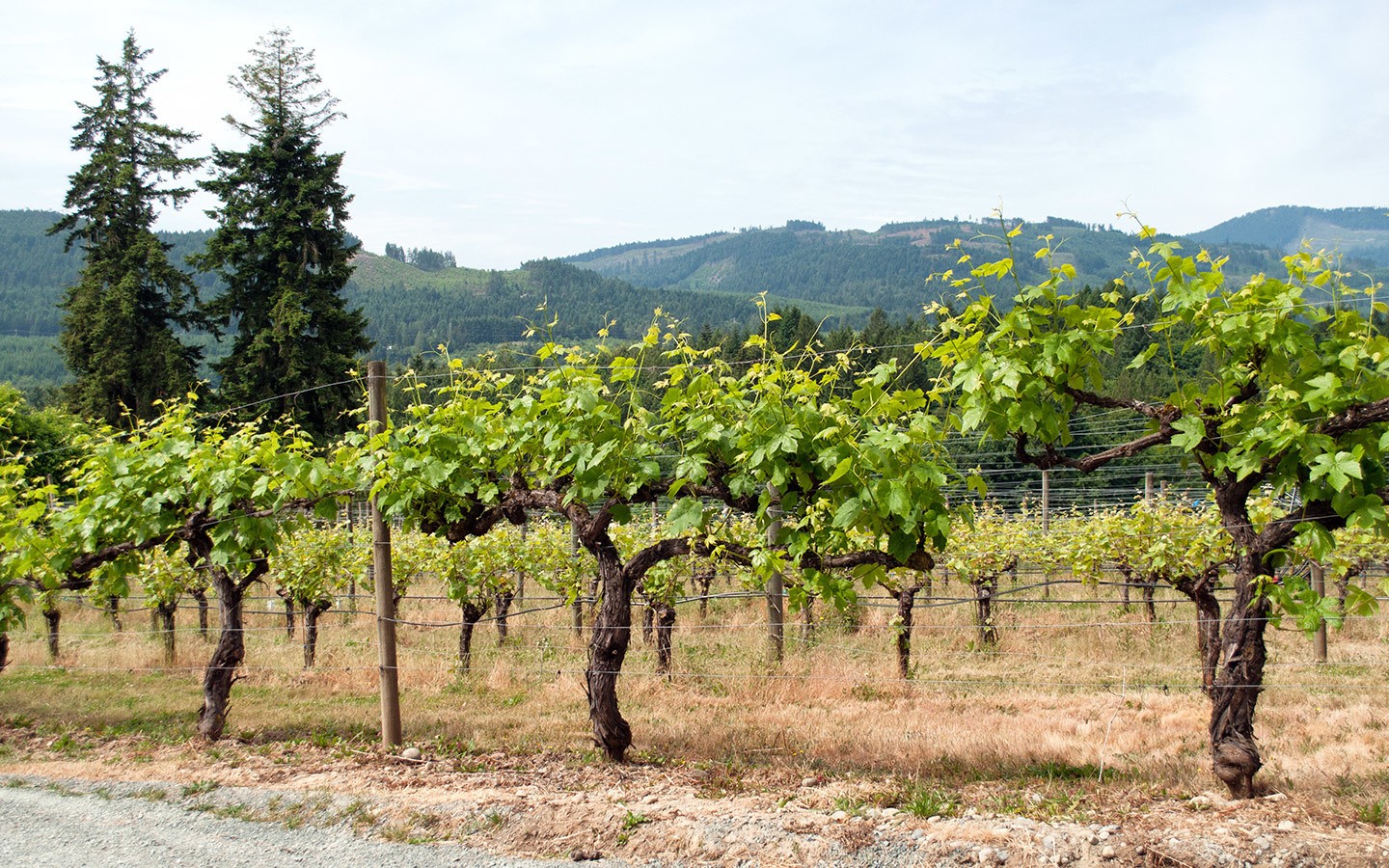 Pick the right soil and a south-facing slope and grapes will thrive. Most producers are small-scale, making only a few thousand cases of wine per year. Blue Grouse was one of the first Cowichan wineries, growing grapes here since the 1970s and setting up their tasting room in 1990. It’s been redeveloped into a new, bright and airy building with views out over their vineyards, where winemaker Bailey Williamson gave us a tasting of some of their wines.

The climate in the Cowichan Valley is best for white grapes, though we did try an unusual black muscat, a cult favourite red with flavours of lychee. Most of the white varieties are cross-bred grapes specially designed for cooler climates. So you don’t get the big names like Chardonnay and Sauvignon Blanc, but instead there are varieties like Bacchus and Ortega. 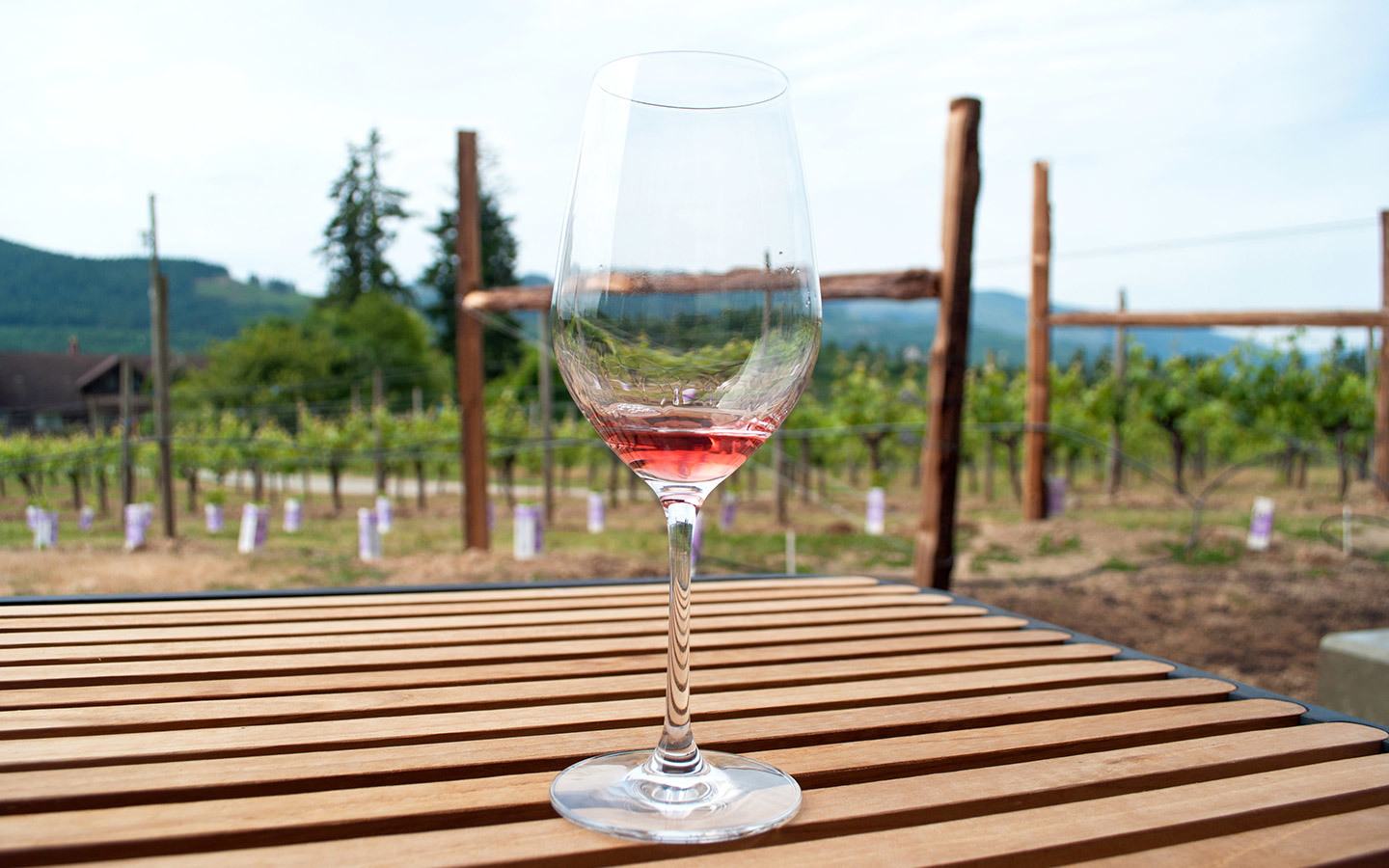 With our wine supplies for the trip safely stowed, we got back on the road and headed towards the city of Nanaimo (34 miles/45 minutes). It’s just across the other side of the Salish Sea from Vancouver, with a ferry connecting the two. Nanaimo has the unusual nickname ‘Bathtub Racing Capital of the World’ after an annual race where competitors use baths converted into boats to sail to Vancouver. One to check out if you’re visiting on the last weekend in July!

Nanaimo’s other claim to fame is the Nanaimo Bar, and you can’t pass by without picking one (or two) up. These triple-layered treats don’t need baking and are made up of a biscuit crumb base, a buttercream layer and a dark chocolate topping. The city’s so proud of them they feature in the local museum and there’s a whole trail dedicated to the best bars, whether you’re a purist or fancy going off-piste with a peanut butter version or a Nanaimo Bar Martini. 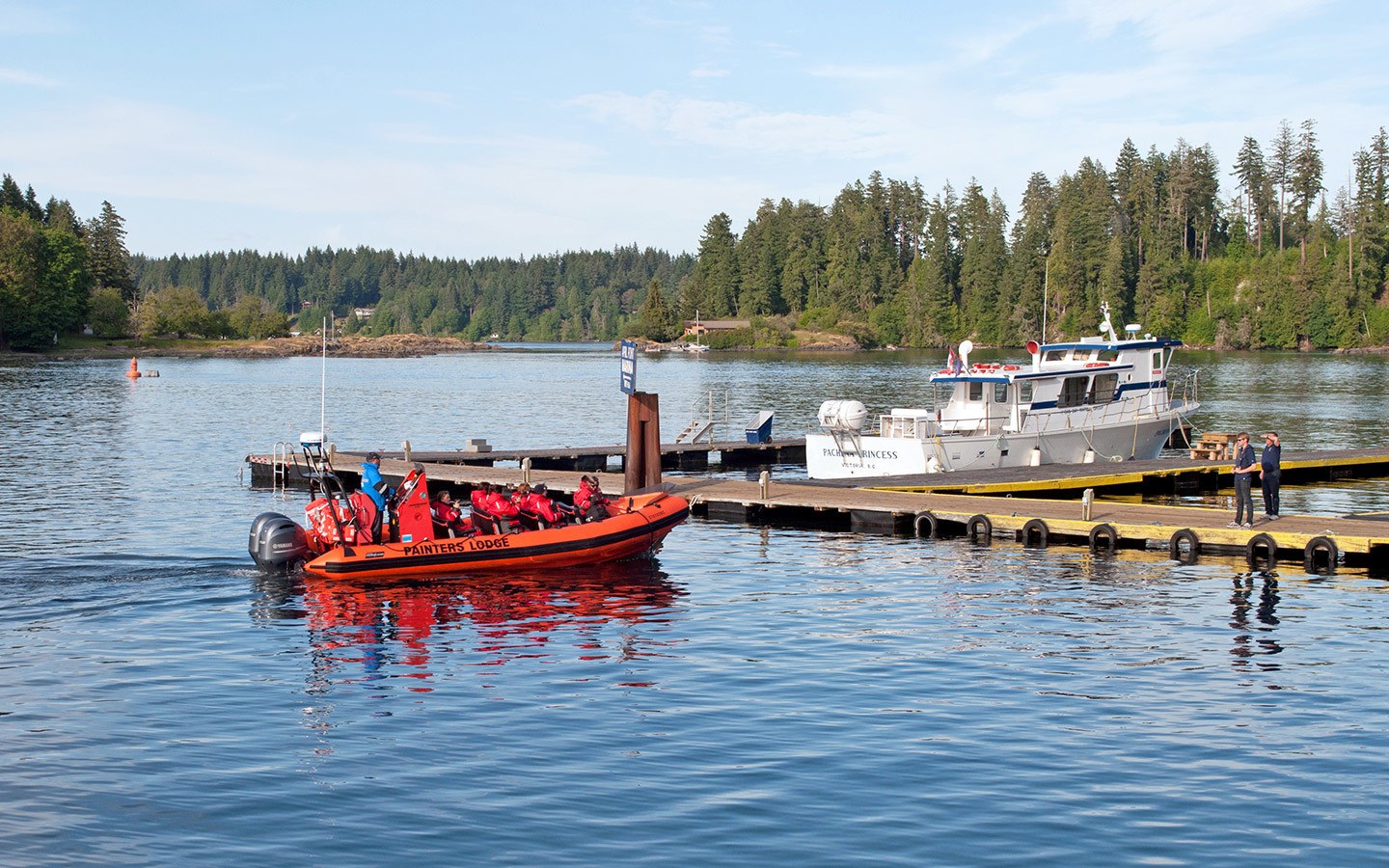 Taking to the water (though not in a bath)

A short drive north of Nanaimo (27 miles/35 minutes) we stopped for lunch at another quirky stop – Coombs Country Market. Not just your average shop and restaurant, it’s famous for its grass-covered roof that’s home to four resident goats. They’ve got a wooden house to live in and plenty of grass to munch on, which they do oblivious to the camera-toting tourists down below. And you can have a (goat-free) Italian feast of pizza and pasta at Cuckoo restaurant. 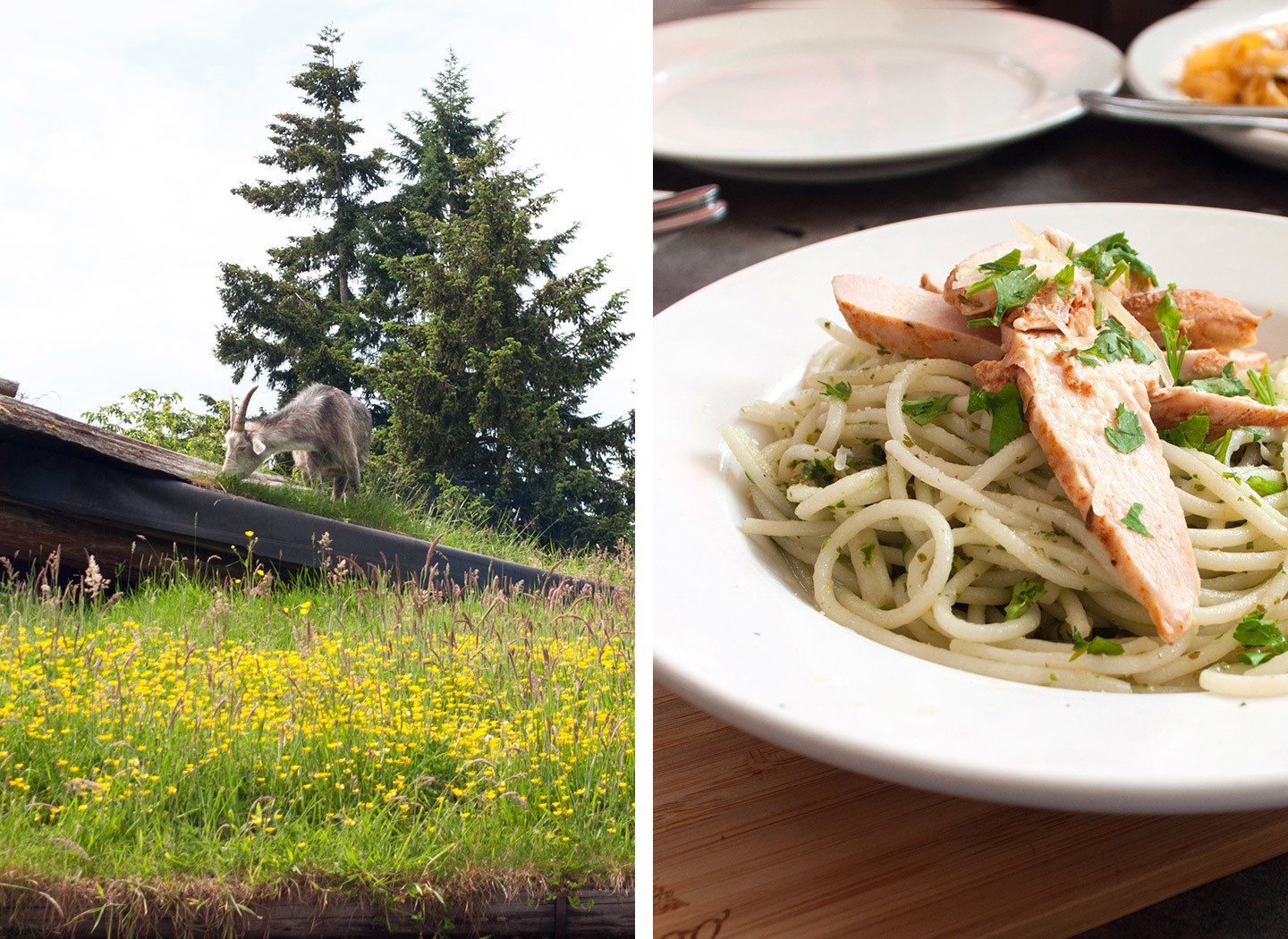 Goats on the Roof and lunch at Cuckoo

Next we took a short diversion inland to MacMillan Provincial Park (12 miles/17 minutes). The park is home to one of the oldest and most impressive ancient forests in Canada. Some of Cathedral Grove’s Douglas Fir trees are over 800 years old and the biggest has a circumference of nine metres. You can follow walking paths through this land of giants as well as swimming in Cameron Lake or visiting the waterfalls in neighbouring Little Qualicum Falls Park.

If you’ve got a couple of days to spare then carry on along the Pacific Rim Highway to the surfer-hub town of Tofino (88 miles/2 hours 10 minutes each way). The road has some stunning views along the way, past snow-capped mountains, lakes and forests. And Tofino itself is known for its wildlife-watching in Clayoquot Sound as well as for hiking, biking and surfing. 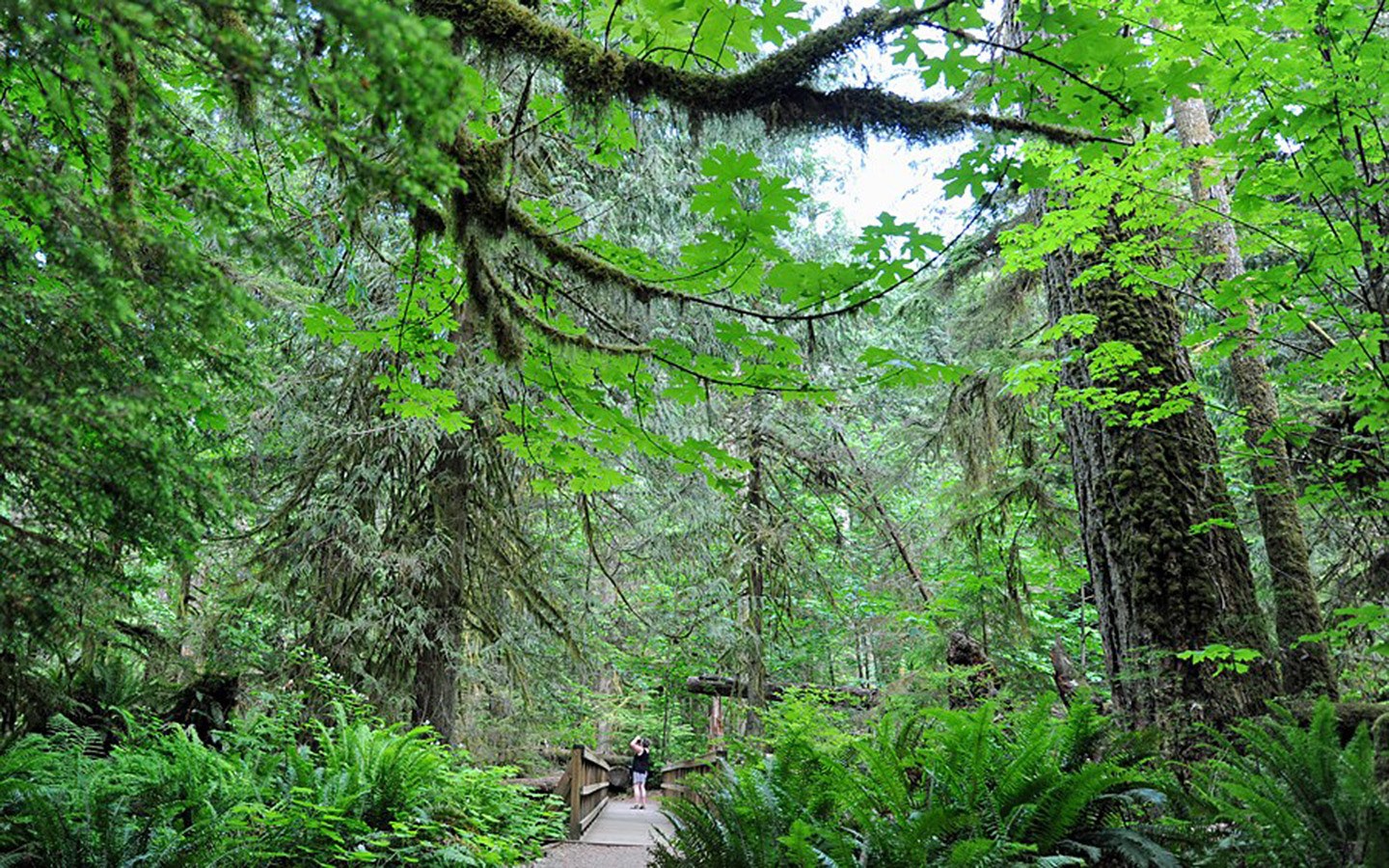 After rejoining the Island Highway at Qualicum, we travelled further north up the island to Campbell River (80 miles/1 hour 20 minutes), passing waterside holiday spots to one side of us and the ski resort of Mount Washington on the other. Our stop for the night was at two twin resorts which face each other across the waters of the Discovery Passage. On the Vancouver Island side is Painter’s Lodge, a favourite spot for salmon fishing trips.

I had no idea how big salmon could get (mine come filleted from the supermarket) but here they have a special club for people who’ve caught one bigger than 30lb, known as a tyee. And if catching one that big isn’t hard enough, you need to do it from a traditional rowboat too. While I was waiting at the harbour, a group sailed in with a woman brandishing a huge salmon. It was so heavy she could hardly hold it up for photos, but even this didn’t make the 30lb. 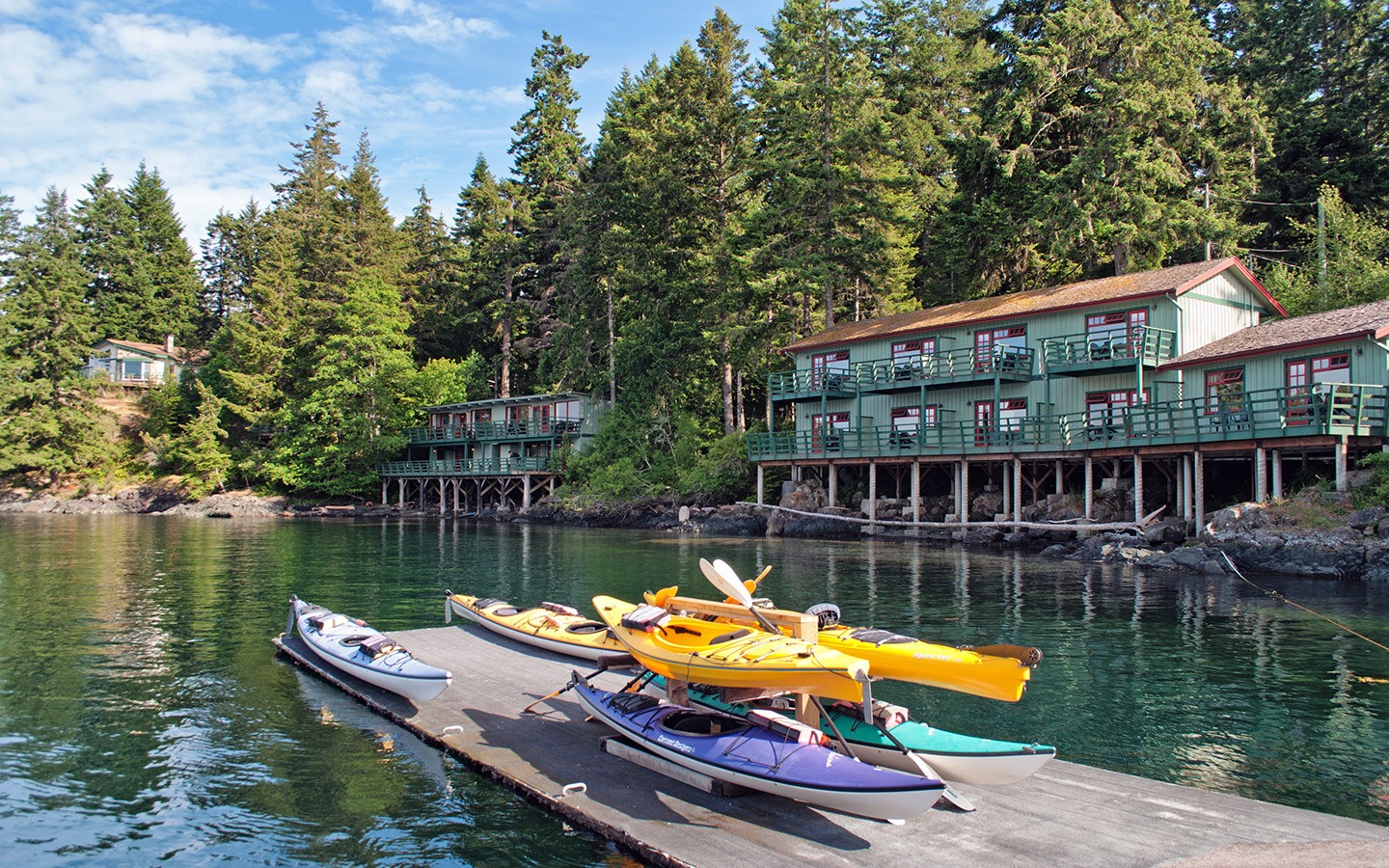 A five-minute boat ride took us to April Point Resort on Quadra Island, one of the enticingly named Discovery Islands. It gets its name from Peruvian explorer Juan Francisco de la Bodega y Quadra who mapped the BC coastline along with another famous name, George Vancouver. The island is 22 miles long and a permanent home to 2700 people, including First Nations communities, mostly living in the south and leaving the north as unspoilt rainforest.

You can hike, cycle, kayak or take a Zodiac boat tour to spot wildlife – whales, dolphins, seals and sea lions all live in the waters of the Discovery Passage. But I’d have happily spent a week there just soaking up the scenery. Their wooden cabins are set among the trees and look out onto the water. It’s one of those places that feels miles from modern life as we ate baked salmon freshly caught on the island and watched the sun set over Campbell River. 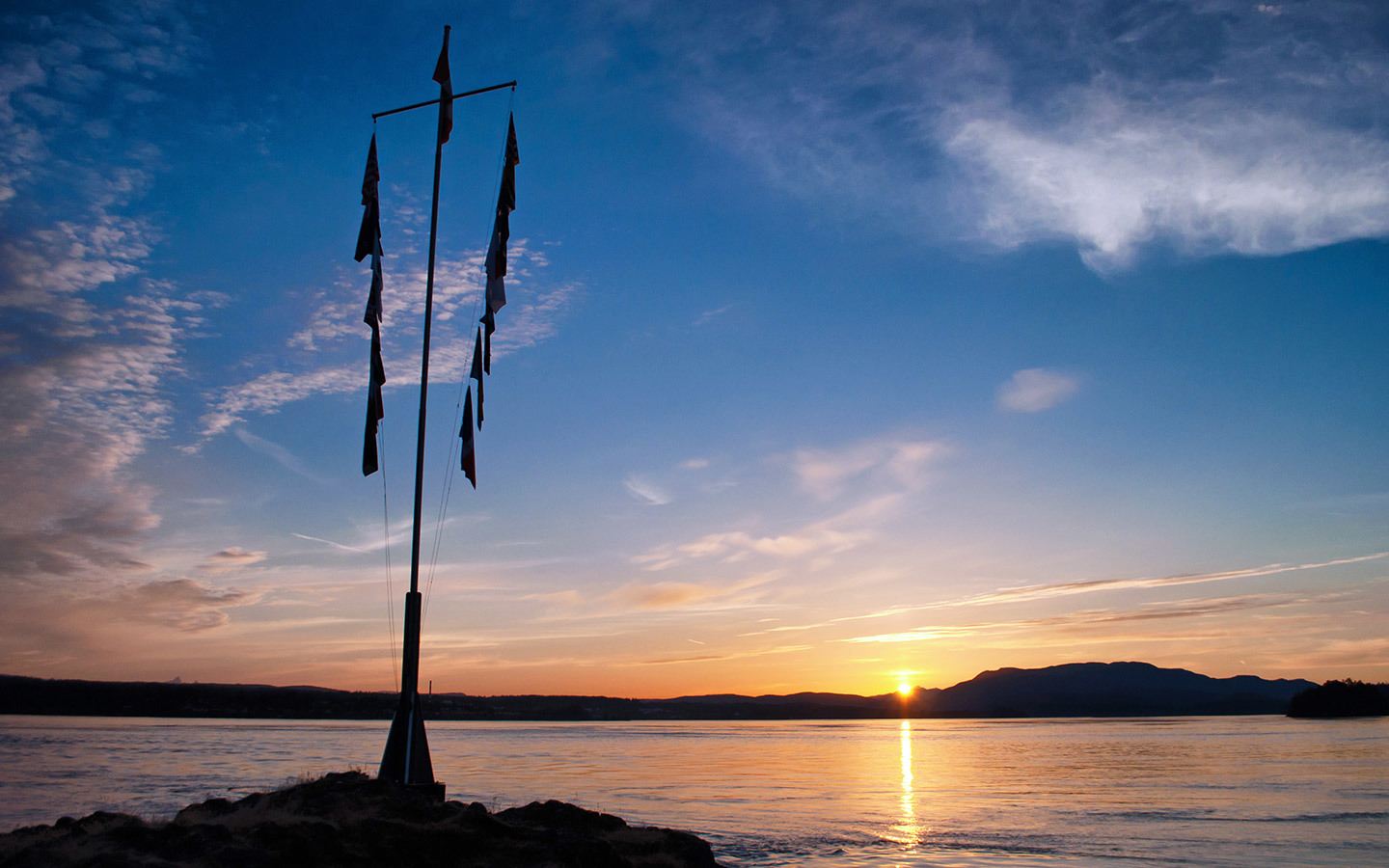 The next morning we were back on the road for the next stretch up to Port Hardy, Vancouver Island’s most northernmost city. But first up was a stop at Elk Falls Provincial Park (3 miles/6 minutes away). The park is one of the most popular on the island with a pathway through a thick conifer forest which leads you to the falls. They drop 25 metres down into a rock-walled canyon and are at their most powerful in the spring when the snow melts.

There are wooden viewing platforms as well as a 60-metre-long suspension bridge which runs across the canyon, giving you a great (if slightly wobbly) view of the falls. It’s another area known for salmon fishing, and you’re visiting from August to November look out for spawning salmon in the river. Salmon lovers can also take a tour of the nearby Quinsam Hatchery. 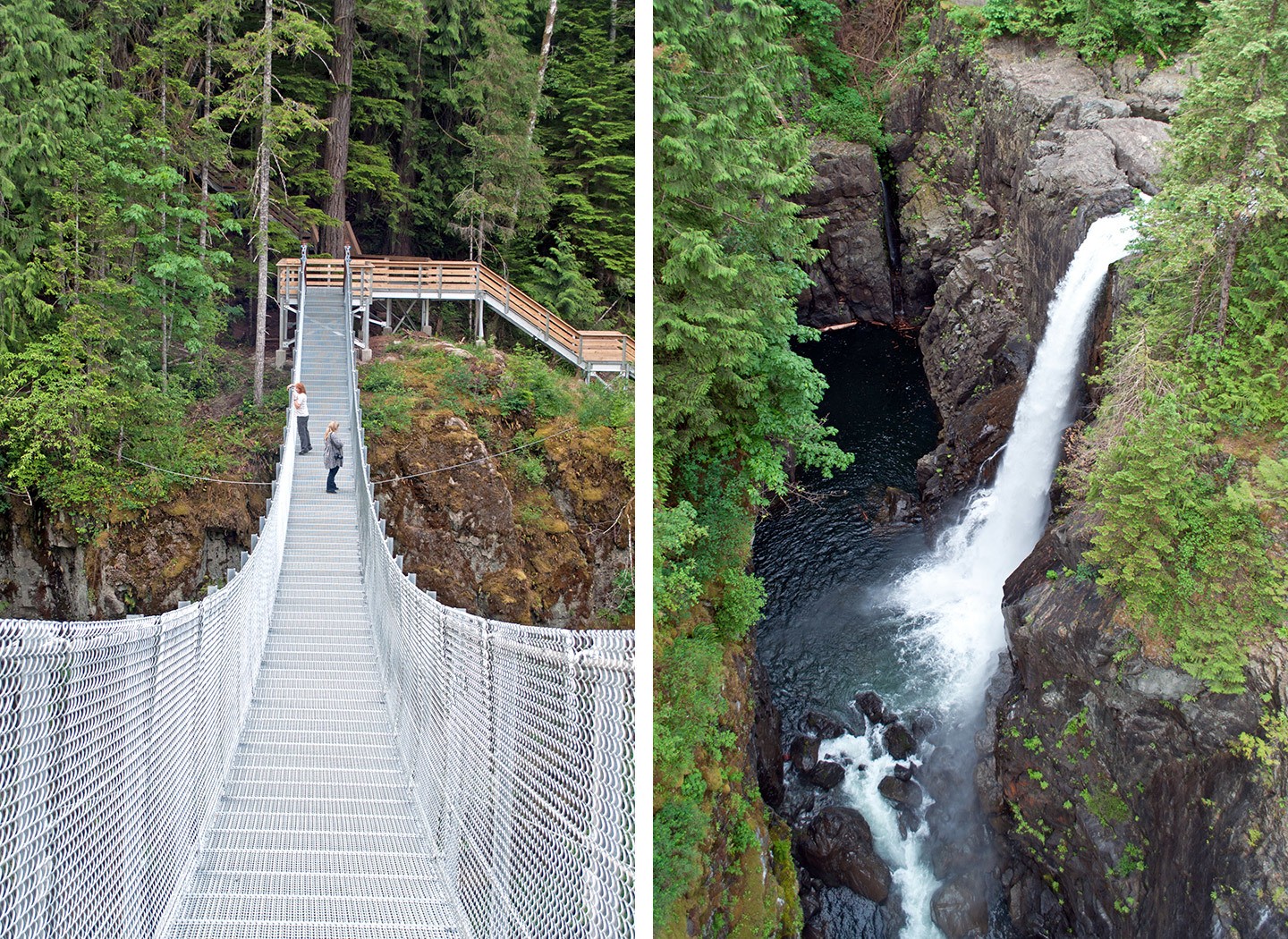 Leaving Campbell River behind, the road got quieter and the towns got smaller and sparser. After driving through miles of forest roads we emerged alongside Nimpkish Lake before rejoining the coast at Telegraph Cove (128 miles/2 hours 40 minutes). This colourful village was founded in 1912 as a sawmill but fell into disrepair until the late 1970s when a local couple created a campground and marina before restoring its old wooden buildings and boardwalks.

Now it’s a protected area and eco-tourism hub that’s a prime spot for whale-watching, and there’s also a whale museum in the village. Although it can get packed in the summer, off-season there are only 20 permanent residents. The lovely, brightly coloured fisherman’s houses which are built up on stilts and connected by a boardwalk have been turned into holiday rentals, where you can go off the grid for a few days away from phones and TVs. 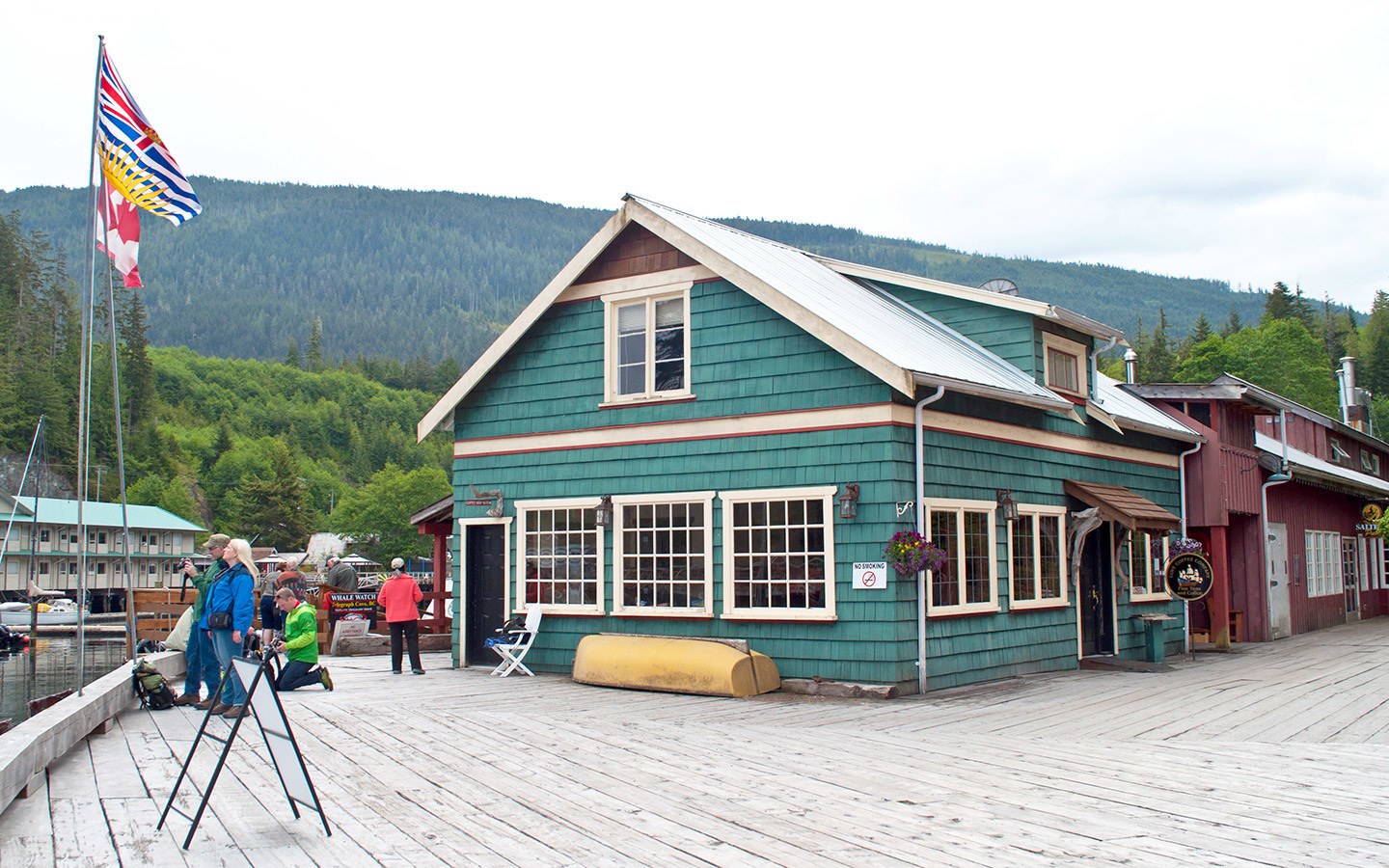 Port Hardy (and beyond)

The final stretch of our Vancouver Island road trip took us 40 miles/50 minutes to Port Hardy. This is the end of the line for the Island Highway and the largest community in northern Vancouver Island. But its main attraction for visitors is as a jumping off point for all sorts of exciting wilderness adventures. You can catch the ferry to Prince Rupert on the northwest coast of British Columbia, or along the Discovery Coast and through the Inside Passage to Bella Coola.

You can also leave the car behind for a hiking trip, including the 11-mile Cape Scott Trail and the challenging, multi-day North Coast Trail. Or take to the skies on board a float plane to explore some of the region’s more remote spots. We headed out into the wilds of the Great Bear Rainforest – an area covering 12,000 square miles that stretches up to Alaska where you can watch grizzly bears from boats in spring or feeding on salmon in autumn. 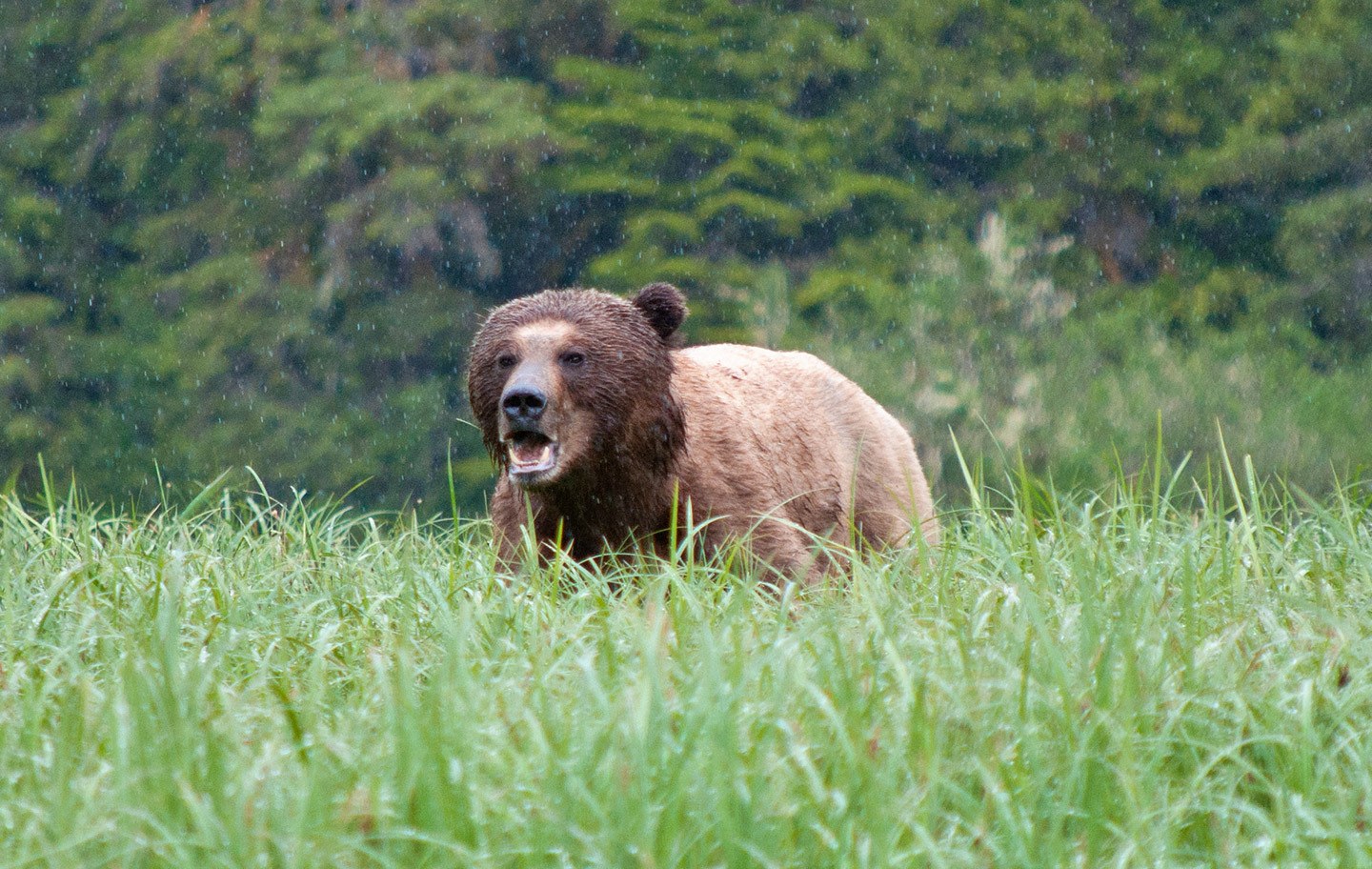 Grizzly in the Great Bear Rainforest

Our road trip from Victoria to Port Hardy covered 365 miles. We did it two days and one night, stopping in Campbell River for the night. But you could easily extend the trip by adding a day or two in Victoria itself, taking it slower and stopping off along the way (see below for some accommodation suggestions for places along the route), adding more wildlife-watching activities or walks, or including a couple of days’ diversion to Tofino on the west coast. We travelled by car but it’s also a good trip to do in an RV motorhome, with campsites all over the island. 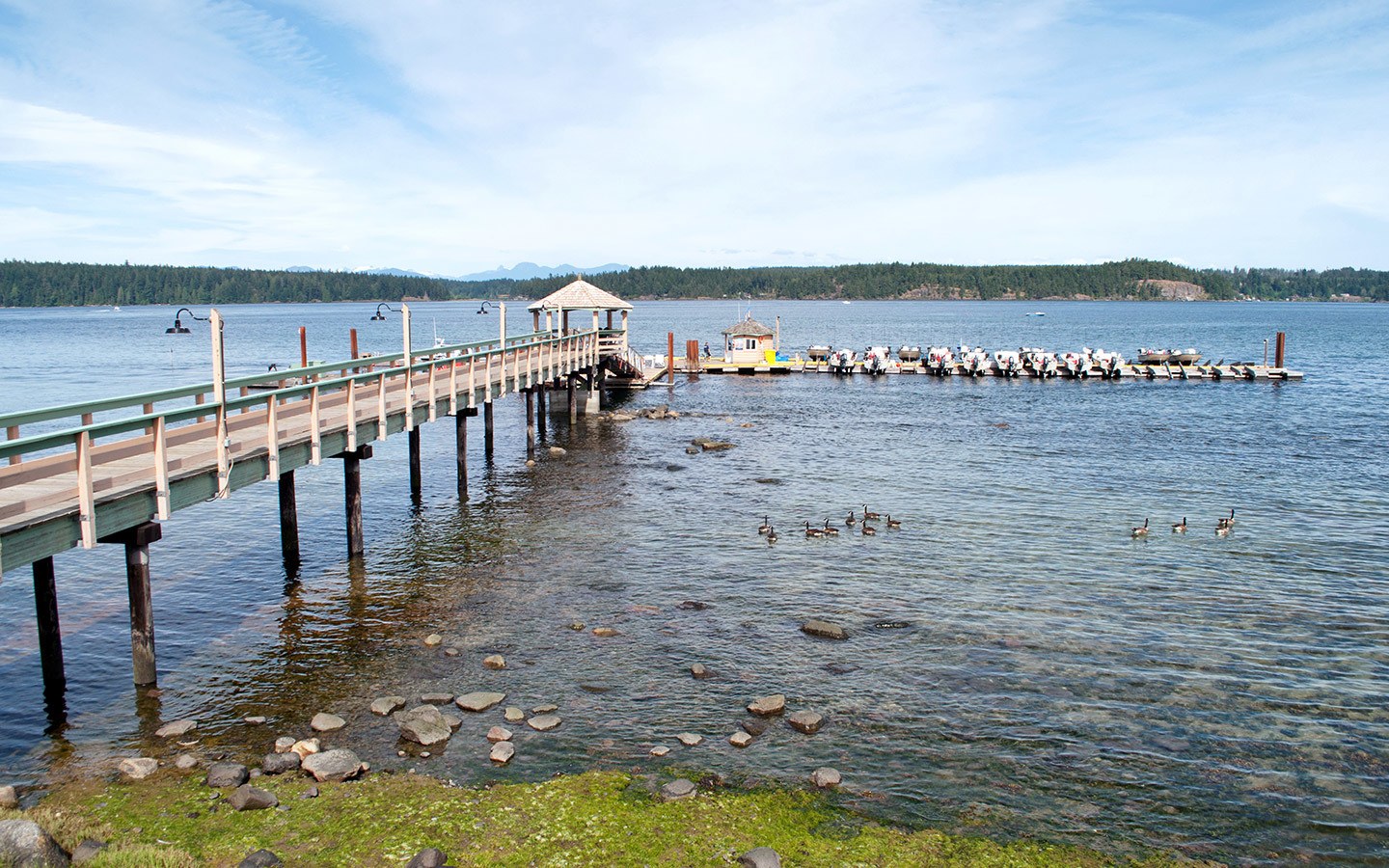 The pier at Painter’s Lodge

Where to stay on a Vancouver Island road trip

Nanaimo: The Coast Bastion Hotel is just across from the harbour in Nanaimo and it’s an easy walk to reach bars and restaurants. Rooms start from CAD $170 a night. Or just outside the city the Living Forest RV park and campground has a peaceful waterside location.

Campbell River: April Point Resort is in a gorgeous spot on peaceful Quadra Island, accessible by boat from Campbell River. It has a mix of rooms, suites and cottages, which start from CAD $189 a night, as well as a restaurant, terrace bar, spa and activities like kayaking and boat tours. Or there’s a campsite with RV pitches at the nearby Elk Falls Provincial Park. 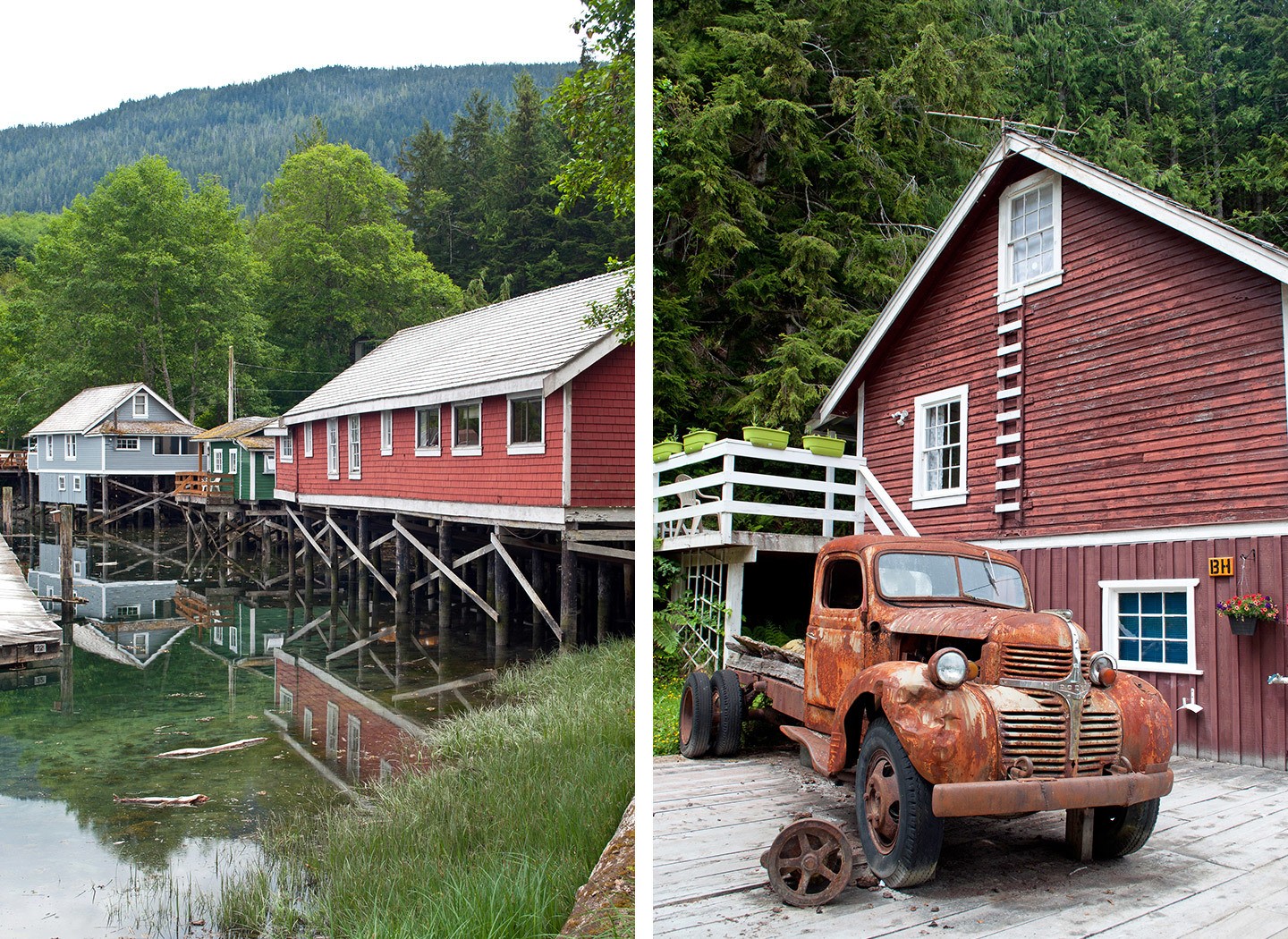 Telegraph Cove: Telegraph Cove Resort has a mix of lodge rooms, dockside suites and the historic wooden cottages, which sleep two–nine people and start at CAD $145 a night in high season. There’s a café and pub on site, plus a campground with full hookup for RVs.

Port Hardy: The Kwa’lilas Hotel (aka the ‘Place to Sleep’) is a First Nations-owned four-star hotel which features masks and artworks created by First Nations artists. Rooms from CAD $149 a night. Or try the Quatse River Regional Park and Campground for RV pitches. 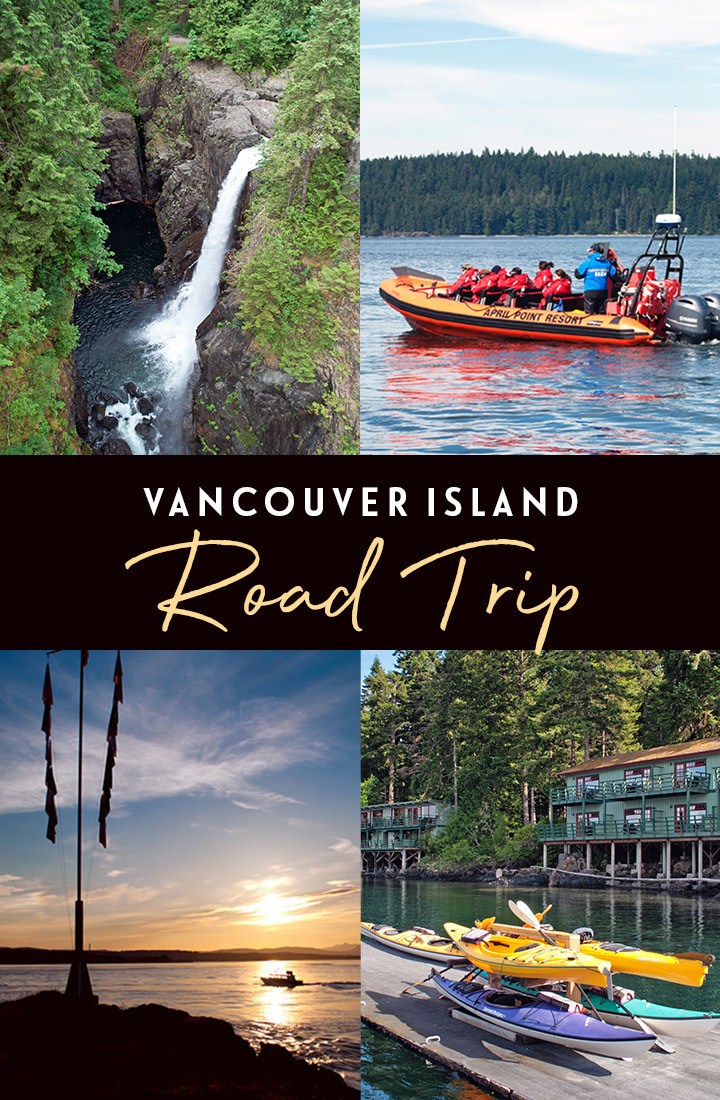 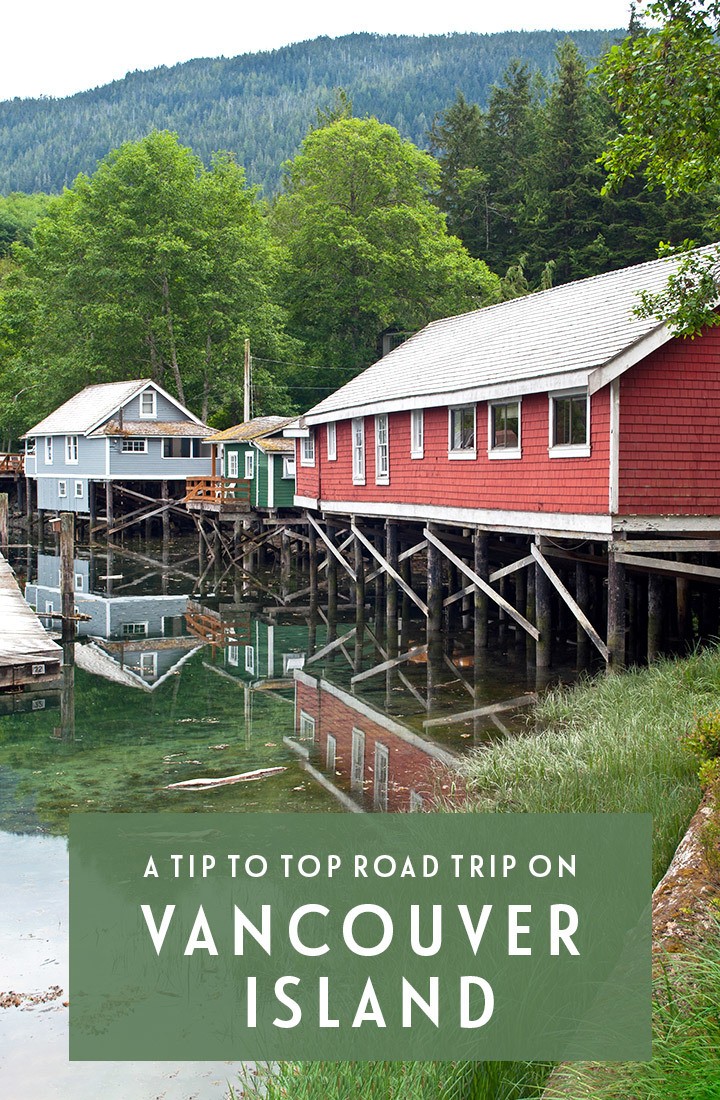