Train travel is one of the best ways to explore Europe – the continent is fairly compact so it’s easy to get around, and you can sit back and soak up the views. If you want to explore Europe by train, most suggested itineraries are geared up for Interrailers with months to spare.

But that’s not the only option – you can have a mini European rail adventure too. Just choose a region and a few destinations and create your own route. Or if that sounds too much work, here are five of the best one-week European rail trip ideas to get you started.

Each of the routes is possible in a week’s holiday, but if you’ve got more time then you can take it slower and spend more time in each place. The idea isn’t to wear yourself out trying to see everything in every destination, but to take in the highlights and get a taste for each place (if you find somewhere you love, you can always come back again and stay longer).

From Scandinavia to Spain, there’s the perfect rail route for you – and if you’re ready to go, check out my detailed one-week itinerary posts for the full details of which trains to take, how much they cost, how to book, what to see and where to stay along the way.

5 itineraries for exploring Europe by train

This train journey takes you through some of Northern Europe’s higlights – from cosmopolitan capital cities to storybook canalside towns and through the Alps on board one of Europe’s most spectacular train journeys. Start your trip in Amsterdam and spend the day exploring the city’s 50km of canals and 1500 bridges. Visit Amsterdam’s museums, take a walk around the UNESCO-listed Canal Ring or hire a bike to explore further afield.

Then take an early train on to the pretty Belgian city of Bruges (3 hours) for an afternoon feasting on local beer and chocolate. Next morning, climb to the top of the Belfort tower or take a boat trip along Bruges canals before catching an afternoon train on to Paris (3 hours).

Paris has something for everyone – big-name museums like the Louvre and Musée d’Orsay, iconic monuments like the Eiffel Tower and Arc de Triomphe, parks, pavement cafés and boutique shops. Or why not try out some of the city’s more unusual attractions, like the Promenade Plantée railway line turned park or underground Musée des Égouts?

Then take the train on to Chur (5.5 hours) and spend the evening in Switzerland’s oldest city. Catch the Bernina Express the following morning – one of the most scenic train rides in Europe. This four-hour rail journey runs through the stunning scenery of the Swiss Alps, across bridges and viaducts past Alpine meadows and traditional mountain villages.

The Bernina Express terminates in Tirano in Italy, where you change onto a local train to connect to Milan (3 hours). Then spend your final morning shopping and sightseeing in the Italian fashion capital’s historic heart before heading home.

This rail trip is a feast of Italian culture, history, food and wine, travelling from Venice in the north down to Sicily in the south. Begin your trip with a full day in Venice – cruise the Grand Canal, get lost in the backstreets and brave the crowds at St Mark’s Square and the Doges Palace. Then take an early train on to Florence the following morning (2 hours).

Spend the afternoon soaking up Florence’s artistic atmosphere, with galleries, museums, churches and palazzi overflowing with Renaissance masterpieces, and try some delicious Tuscan food and wine. Next morning, take the short train journey on to Rome (1.5 hours).

Explore some of Rome’s historic highlights, from the Colosseum and Pantheon to St Peter’s Basilica and the Trevi Fountain, before finding the perfect piazza for a sunset aperitivo.

Travel further south to the gritty coastal city of Naples (1 hour 10 mins) to spend the day exploring its archaeological treasures and stuffing yourself in the home of pizza before taking the Circumvesuviana railway south to Sorrento. Eat gelato and soak up the seaside views in Sorrento then spend a day visiting some of the nearby sights.

You can go back in time at the buried Roman cities of Herculaneum and Pompeii, take a boat trip along the colourful villages of the Amalfi Coast or visit the glamorous island of Capri.

Then finish your trip by travelling south to Sicily. Getting there’s an adventure in itself – you can take the train all the way as it travels onto the ferry for the 30-minute boat trip across the Messina Straits. Once in Sicily, you can get a taste of the island by choosing between Taormina (6 hours 45 mins), Catania (7.5 hours) or Palermo (9 hours) for your final stop.

Head east to some of Europe’s cultural capitals to experience world-class art, architecture and music as you travel to five different countries in just one week. Start your rail journey through Eastern European in the Hungarian capital Budapest, with a full day to soak up the city’s culture, steam in its thermal spa baths and party by night in its ruin pubs.

Then catch a train on to Bratislava in Slovakia (2.5 hours), a compact city set on the banks of the Danube. Spend the afternoon checking out Bratislava’s mix of 18th-century and Socialist-era architecture, from the blue-painted Church of St Elisabeth to the quirky ‘UFO’ Bridge.

Then travel on to Vienna in Austria (1 hour by train – or if you fancy a change from rail travel, the two cities are also connected by a boat which runs along the Danube). Visit an ornate palace, take an architecture walk around the Ringstrasse, watch the horses at the Spanish Riding School, catch a Mozart concert at the State Opera House and fill up on delicious sachertorte at a traditional Viennese coffee house.

Next travel on to Ljubljana in Slovenia (6 hours) along the route of the scenic Semmering Railway through Austria’s mountains. Spend the afternoon exploring the bridges and Baroque churches of Ljubljana’s charming old town and catch sunset from the castle.

Take a day trip from Ljubljana to beautiful Lake Bled (1 hour by train), famous for its island church, hilltop castle and creamy custard Bled cakes. Then end your trip in Zagreb, across the border in Croatia (2.5 hours), with a day wandering around the historic Upper Town, picnicking in Maksimir Park and visiting the quirky Museum of Broken Relationships.

This rail journey takes you across Spain and Portugal, from the Mediterranean to the Atlantic, with plenty of fantastic food and drink along the way. Start your trip in the Catalan capital city of Barcelona and spend a full day checking out Gaudi’s unique architecture, people-watching on Las Ramblas and soaking up the sunshine on Barceloneta beach.

Next morning, take an early train down the coast to Valencia (3 hours) where you have the afternoon and next morning to explore its mix of old and new – from the traditional buildings of the Ciutat Vella old town to the Space-Age City of Arts and Sciences – and try a paella in the city where it was first created. Then take the short train ride inland to Spain’s capital Madrid (1.5 hours) for an evening of eating and drinking in the city’s tapas bars.

Spend the next day discovering Madrid’s parks, museums and historic buildings – from the famous Prado art museum and Mercado de San Miguel food market to the largest palace in Europe – before catching the Lusitania overnight train on into Portugal. The train leaves Madrid just before 10pm and you wake up in Lisbon early the next morning.

Spot street art and feast on local seafood and pastel de nata custard tarts in Portugal’s capital. Or take a short day trip to the colourful hilltop palaces of Sintra (30 minutes each way). Then finally travel north to Porto (3 hours) to end your trip with a boat trip on the River Duoro and port-tasting at the famous producers across the river in Vila Nova de Gaia.

Read the full Spain and Portugal by train itinerary

This final Europe by train itinerary takes in some of the scenic highlights of Scandinavia on a journey across three countries. Start with a full day in the Danish capital Copenhagen – cycle the cobbled streets, ride the Tivoli Gardens, rollercoasters walk along the canals of Christianshavn and check out Nyhavn’s design shops and Michelin-starred restaurants.

The following day, take the train across the border to Sweden, travelling to Stockholm across the Öresund Link, a unique combination of a bridge and a tunnel (5.5 hours). Then spend the afternoon and the new morning exploring Stockholm.

Wander through the medieval streets of the Gamla Stan old town, learn about Sweden’s most famous exports at the ABBA and Nobel Prize museums, or take a boat trip to see some of the 30,000 islands which make up the Stockholm Archipelago.

Then catch an afternoon train across the border to Oslo in Norway (6.5 hours), where you have the next day to soak up Scandinavian culture at the city’s museums, art galleries and the impressive modern Opera House. Next head west on the scenic rail route towards the coast – first taking a mainline train to Myrdal (4.5 hours) and then the stunning Flåmsbana mountain railway to Flåm, passing mountain peaks, lakes and waterfalls (50 mins).

Spend the night on the edge of the fjords in Flåm, and take a boat trip out into the Sognefjord the following morning before travelling on to Bergen (2 hours). Finish off your trip visiting the colourful wooden houses of the UNESCO World Heritage Bryggen district, checking out the views from the funicular to Mount Fløyen and eating local seafood at Bergen’s fish market. 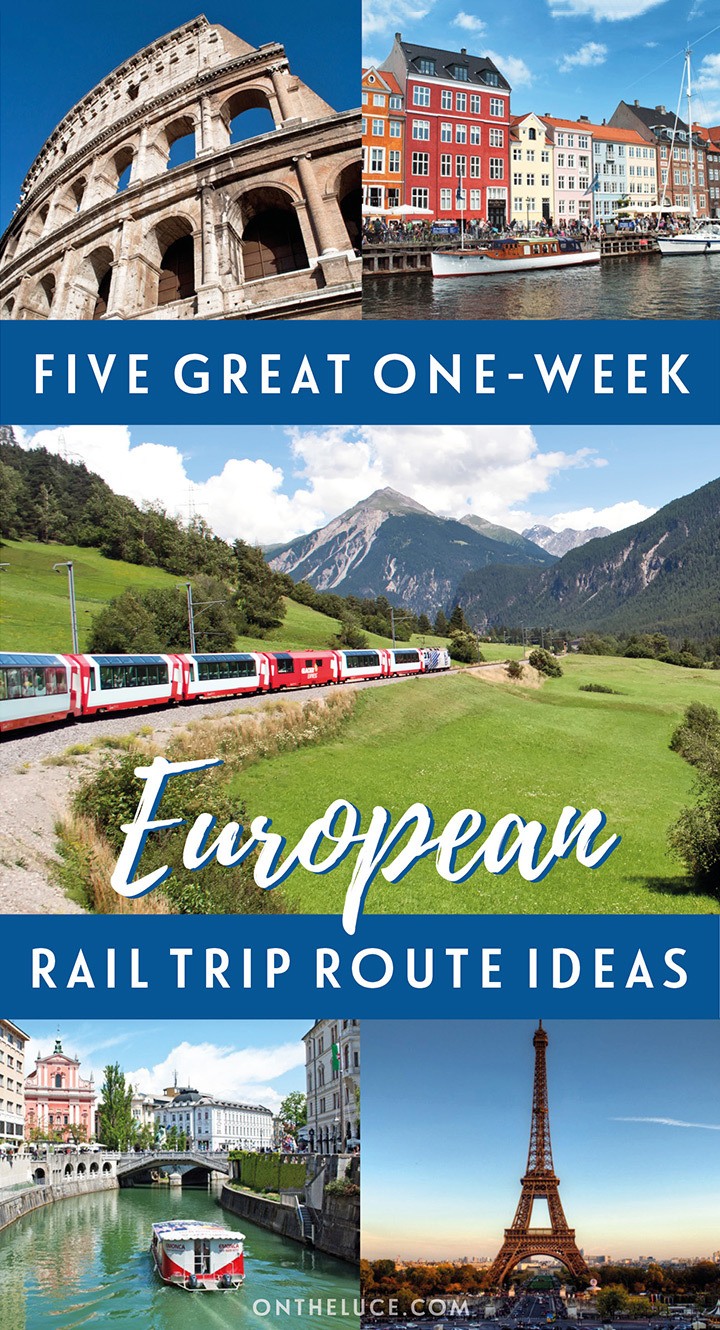 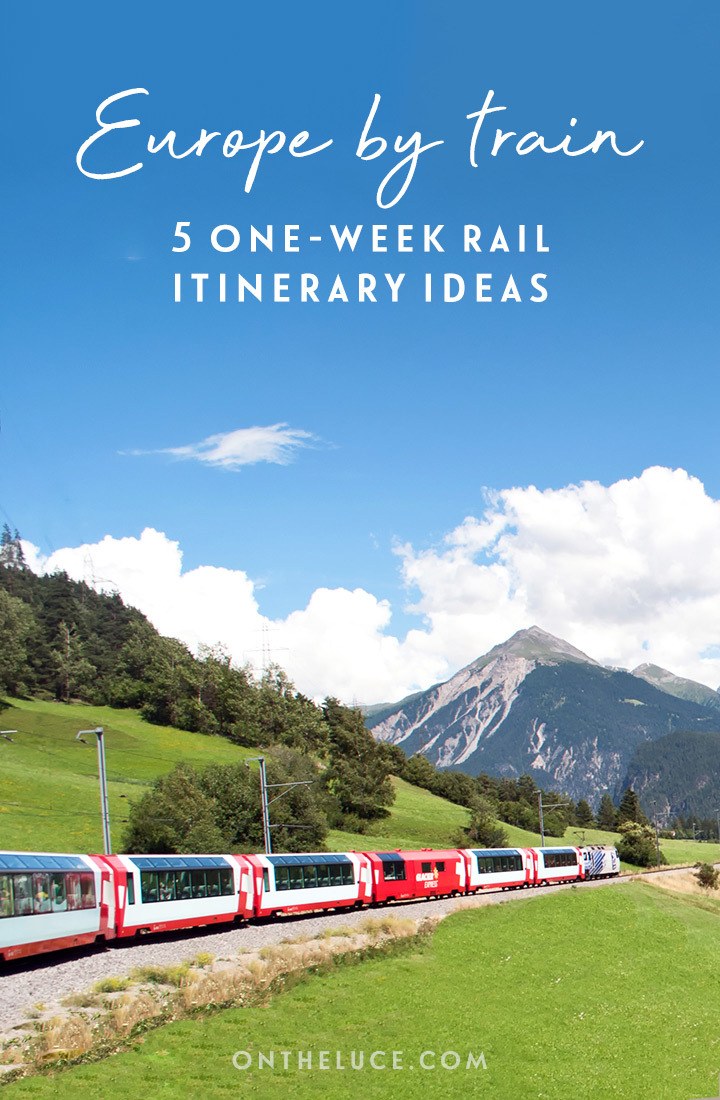