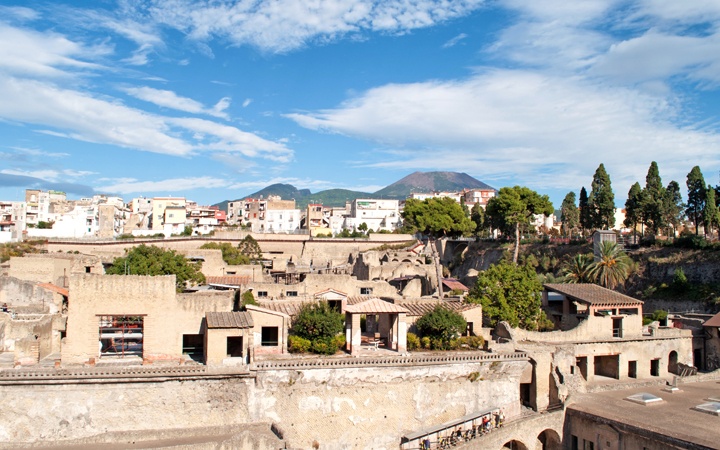 Below an unassuming town south of Naples lies a buried Roman city – but not the one you’re probably thinking of. Herculaneum was covered by the same eruption that destroyed its more famous neighbour Pompeii in 79 AD. But where Pompeii was quickly buried by a cloud of ash, Herculaneum escaped the first part of the eruption unscathed as the wind was blowing the other way. But later that night the ash column collapsed and sent a pyroclastic flow – a super-heated avalanche of gas and rock – towards Herculaneum. 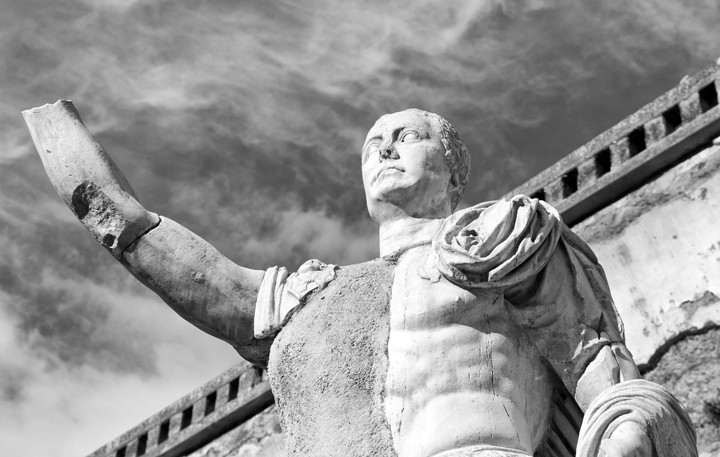 Originally it was thought that the city’s residents had escaped because hardly any skeletons were found. But in the 1980s, excavations of old boat chambers found remains of 300 bodies where people had been waiting to be rescued. Despite being sheltered from the ash, the 500°C heat had killed them instantly. After the first eruption, five more flows covered the city with a layer of rock and ash 25 metres deep. It formed an airtight seal that preserved it for the next 1700 years. The new town of Ercolano grew up over the top, and the ruins were only rediscovered in the 18th century when someone drilling a well hit a building rather than water. 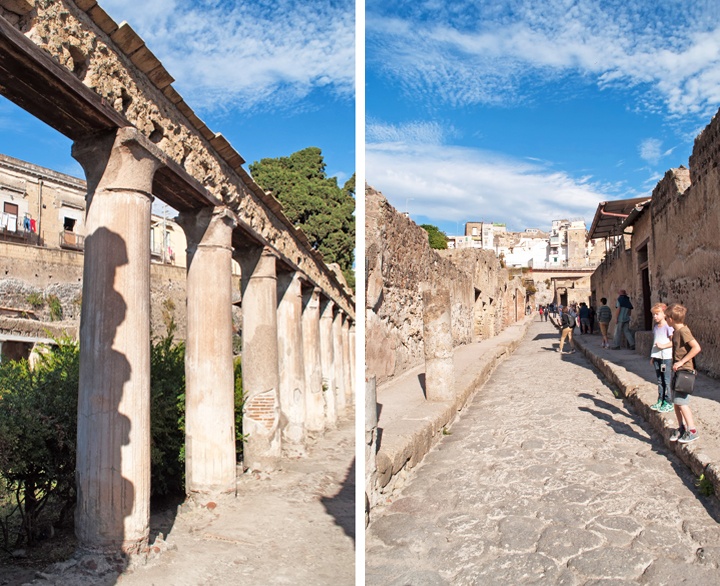 The first excavations of Herculaneum focused on retrieving buried valuables to sell rather than preserving the ruins. Then when Pompeii was discovered the focus shifted there instead – not least because it was covered in only four metres of ash so was much easier to excavate. Digging only restarted in Herculaneum in the 20th century and there is still a whole lot more that’s waiting to be uncovered. But for now the focus is on protecting the current ruins from damage rather than uncovering new ones. 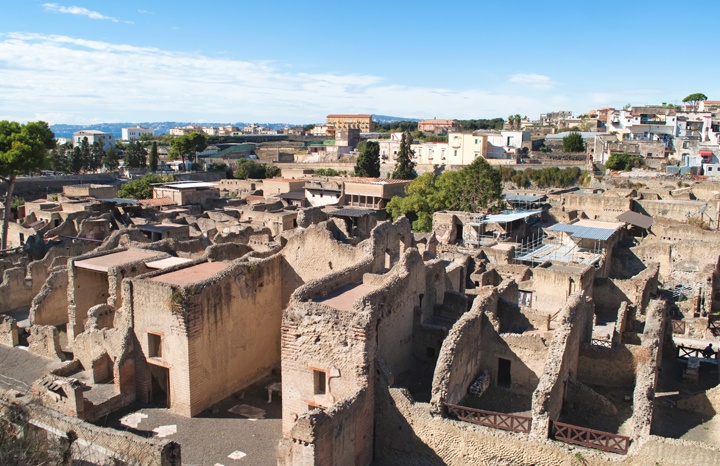 Looking down on Herculaneum, with modern Ercolano behind it

The difference in the way that Pompeii and Herculaneum were destroyed has had a big effect on what you can see today. At Herculaneum the flows surrounded and filled the buildings but kept them in tact, whereas at Pompeii the weight of the ash crushed many buildings. The heat of the pyroclastic flows also carbonised the wood at Herculaneum so some of the original doors, roof beams and even furniture has been discovered. Add to that the fact that Herculaneum was a richer city than Pompeii, with larger, more ornate buildings complete with mosaics and marble cladding, and you get even more impressive ruins. 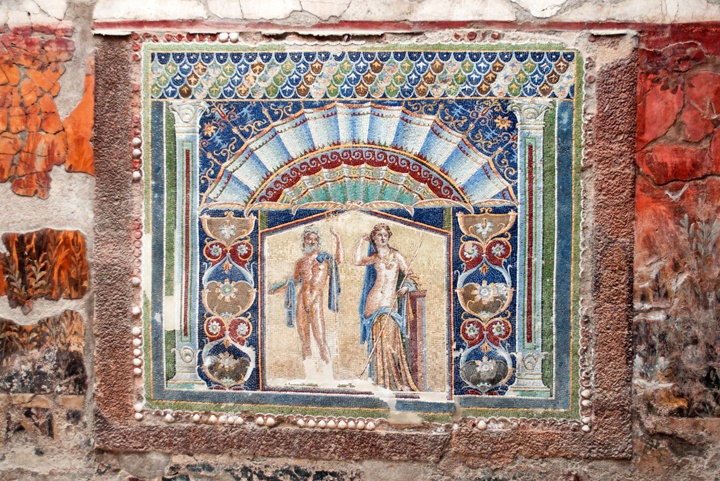 The mosaic of Neptune and Amphitrite at house number 22

The old city of Herculaneum lies about 50 feet below the level of modern Ercolano, so when you arrive your first sight is of the ruins is from above, with Vesuvius looming in the distance behind them. As you walk through the streets, some buildings are so well-preserved that it’s hard to believe they’re over 2000 years old. Many still have their original floors and stairs, and even their decorative statues, frescoes and mosaics. In what was the dining room of house number 22 you can see one of the most beautiful mosaics showing the gods Neptune and Amphitrite. But overlooking it all are the balconies of modern houses and people going about their everyday lives – with the city of today coexisting with the ghost city beneath them. 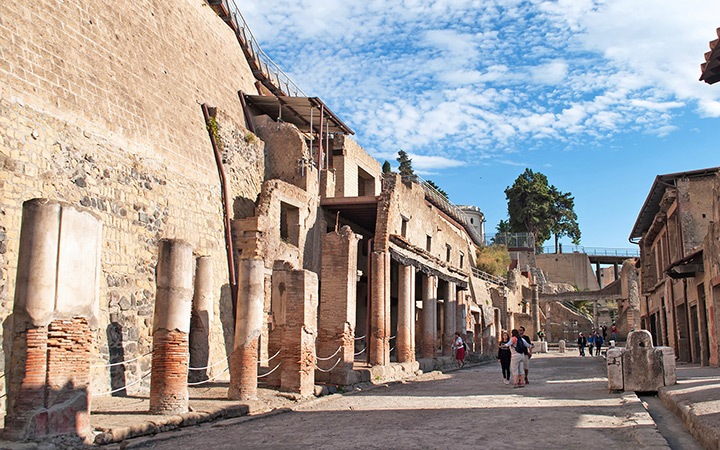 Opening hours: The Herculaneum archaeological site is open from 8.30am to 7.30pm from April–October or 5pm from November–March, with the last admission 90 minutes before closing time.

Herculaneum tickets: You can buy tickets to Herculaneum online, though you need to choose a specific date. Entry costs €11 for adults, €5.50 for EU citizens aged 18–24 or free for EU citizens under 18. You can also get a three-day combined ticket which also covers Pompeii, Oplontis, Stabiae and Boscoreale for €22, though it’s not available online. There are also skip-the-line priority tickets if you don’t want to queue. 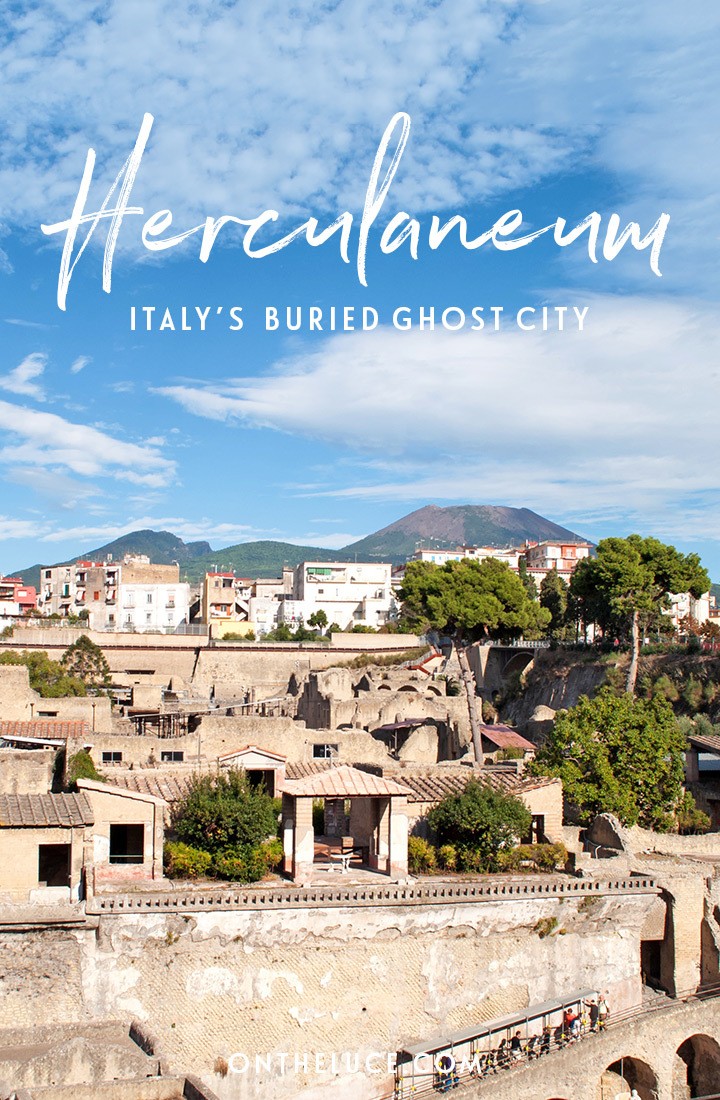 Last year I had the opportunity to be in Naples and occasionally visited Herculaneum. I was there immediately after opening and I had ruins only for myself. Cool feeling :)

Sounds great – getting in there early is a good way to see it without the crowds.

Hope you enjoy it – that's one of my favourite regions on the world!

Wow, that is really cool. Like everyone else, I have heard of Pompeii. But I have never heard of Herculaneum. What happened to the city and especially to the 300 people who didn't manage to escape is really horrible. But it's cool that the heat wave that wiped it out left everything intact so that it is still possible to not just see buildings but even mosaics and furniture.

Having grown up in a region in which the Romans had several settlements (my neighbour tried to build a new house and everything was delayed by a year because they found Roman remains and had to excavate them first before he could go on) I have seen lots of remains. But most of the time, they have been destroyed and plundered. I would love to go to Herculaneum, because it sounds as if it's very different from the broken pillars that I am used to.

Cool post and thank you for making me aware of this really cool tourist attraction!

So glad to introduce you to such a fascinating place! How amazing to just find Roman remains outside your house too.

I really want to go there and see the mosaics.

It's a fascinating place!

We were lucky enough to see Naples Museum, though the foray in to the city of Naples was less than appealing...we based ourselves in Sorrento and then traveled to both Pompeii and Herculaneum. Much of Herculaneum was being renovated and a lot of the carbonized items were covered for this reason. (april 2015) Herculaneum was by far my favorite. It was amazing to see the houses in such amazing shape. Pompeii was great too, but again a lot was being renovated there. Including the small Coliseum .......both were numbers 1 and 2 on the bucket list so we were happy

I think Naples has to have some of the scariest driving in the world! I'd like to go back and see the museum though. Loved Sorrento both times I've visited and agree that Herculaneum was a favourite, I think the scale of it was so much more manageable and it really came to life for me.