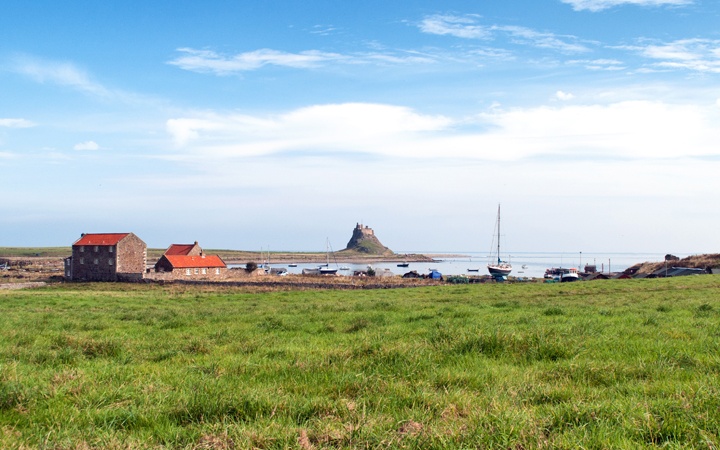 On Lindisfarne, or Holy Island, the islanders live their lives based on the rhythm of the tides. Linked to the Northumbrian mainland by a narrow causeway, twice each day the island is completely cut off by the tide. You can only travel between Lindisfarne and mainland during twice-daily six-hour periods, which change every day. So Lindisfarne’s businesses have to set different opening hours each week based on the tide tables. At the time we were visiting Northumberland, the tides meant that the island was cut off between noon and 5pm, so rather than squeezing in a trip over early in the morning, we decided to maroon ourselves there for the afternoon. The island is a hugely popular tourist destination, but most visitors come when the tide is out, so staying on the island meant we got to see a different, quieter side. 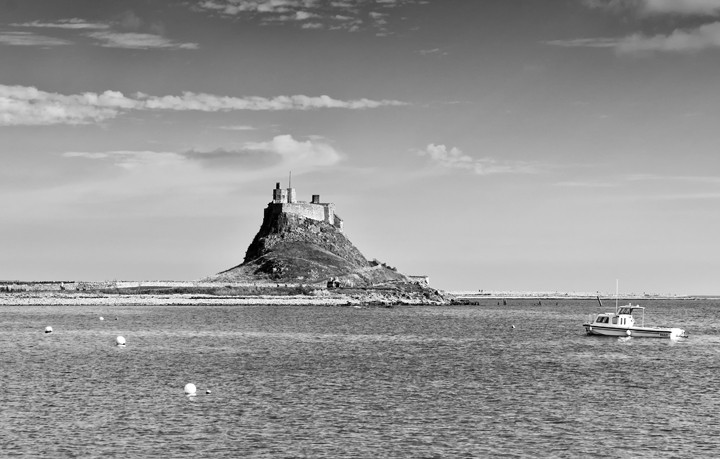 Lindifarne Castle from across the harbour

As we crossed the causeway, a stream of traffic was heading back to the mainland before the water cut them off. The road runs across a bank of sand and marshland. The sea looked so far our as we crossed over that it was hard to imagine the road would be completely covered just 15 minutes later. But appearances can be deceptive, as the flatness of the land means the tide comes in very quickly here. Something which still catches someone out almost every month, despite the posters all over the island warning of cars getting swamped by the tides. However powerful you think your car might be, it’s still nothing compared to the power of the oceans. If you do manage to get stuck then there’s a wooden hut up a ladder – like a mini lifeguard’s shelter – where you can wait out the tides (though it probably won’t do your car much good) if you don’t want to fork out the £4000 it costs for a helicopter rescue. 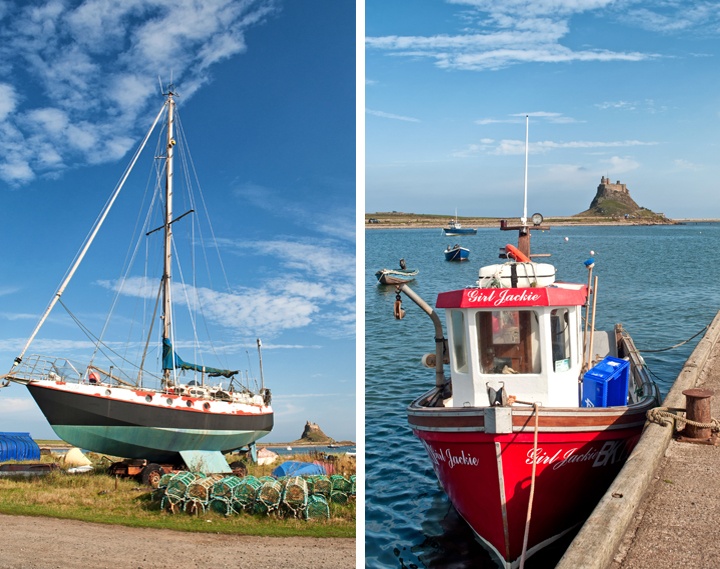 Lindisfarne boats – on land and on the water

Safely over the causeway in plenty of time and happily marooned for the next six hours, we left the car on the outskirts of the village and set off to explore the island. The whole thing is only about three miles long, so you could easily walk around the whole coastline in a few hours. Cut off by the tide you can see feel how isolated it can be. It was an unusually beautiful sunny day when we were there but even then the wind blowing off the North Sea had a frosty edge to it. You can imagine the landscape here being battered and beaten by winter storms, with nothing to protect it from the winds blowing down from the Arctic. 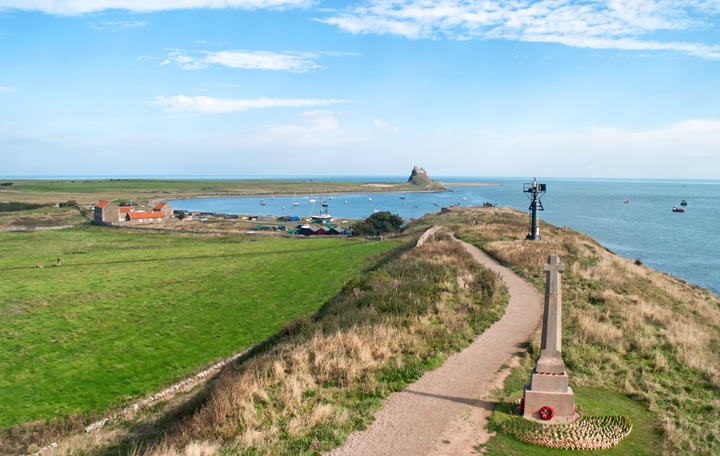 Looking across the island from the viewing tower

At one end of the island is the village, with a few shops, pubs and B&Bs. But our first stop was ruined Lindisfarne Priory. The first monastery here was founded by St Aidan in 635 AD and became an important pilgrimage site for centuries of Christians. The spiritual and religious history of the island still attracts visitors today and it you can still sense a peaceful feel around you. Behind the Priory is a tower with great views across the island and over to the mainland. The clear weather meant we could see along the coast to the castle at Bamburgh and as far as the Cheviot Hills. Much closer was the island’s horseshoe-shaped harbour, home to a few small fishing boats. There are some larger ones on the water’s edge too, ingeniously recycled by being turned upside down and used for storage when they get too old to sail any more. 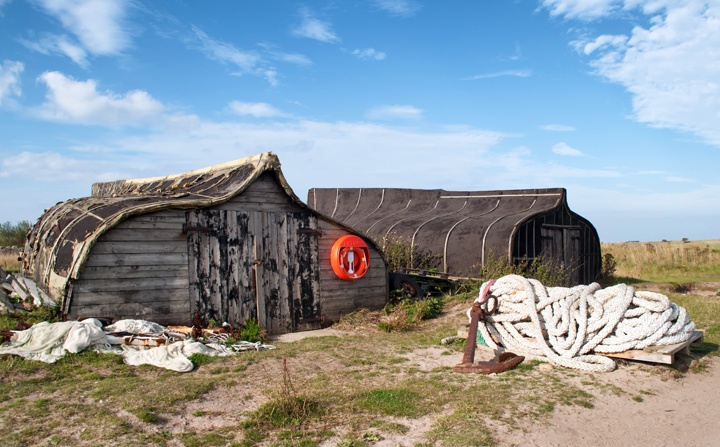 Along the water’s edge from the Priory, Lindisfarne’s castle towers over the flat expanse of the rest of the island. Set on a rocky crag, it’s visible for miles around – we could even watch the sun rise up behind it from our holiday cottage across on the mainland. The castle was built in the 16th century and is just one of a whole series of castles in the area that protected the English border from Scottish and Viking invaders. It was first built as a fort, using some of the stone from the Priory after it was destroyed in the Dissolution of the Monasteries. But when it wasn’t needed for protection any more, the castle became the holiday home of the owner of Country Life magazine who had it renovated by Arts and Crafts architect Edwin Lutyens. There’s also a walled garden designed by Gertrude Jekyll, sheltered from the worst of the island winds. 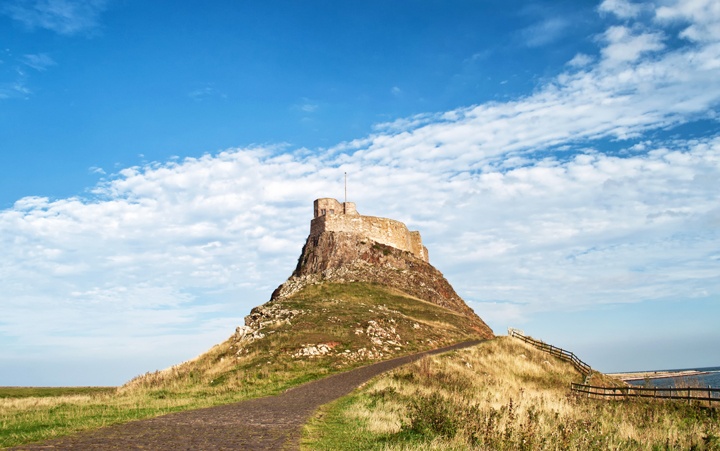 Lindisfarne Castle towering above the island on its rocky crag

Past the castle the island gets emptier, with just the occasional farm and field of sheep dotted between the sand dunes. Along the water’s edge we came across piles of stones, stacked up on top of each other. I did wonder if there was any special spiritual significance but it turns out it’s probably just that one person started it and then other people copied them. Still it looks interesting and I’m impressed they manage to stay standing through the winter weather. With the wind starting to pick up we headed back towards the village to wait out the tide in one of the island’s pubs. Many shops and cafes closed up while the tide was in and the whole place felt almost deserted. Though I did wonder what happens if you have to travel to the mainland for work or school – do you have to stay somewhere else when the tides don’t fit with your hours? But with the tide back out and the causeway uncovered our time as Lindisfarne castaways was over. 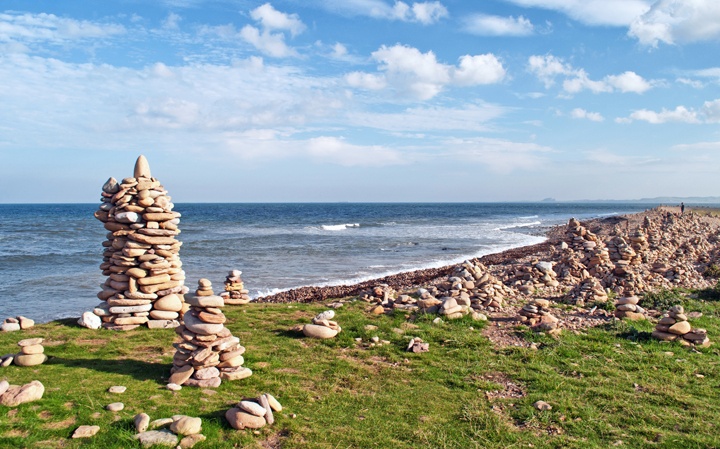 Piles of stones along the edge of the shore 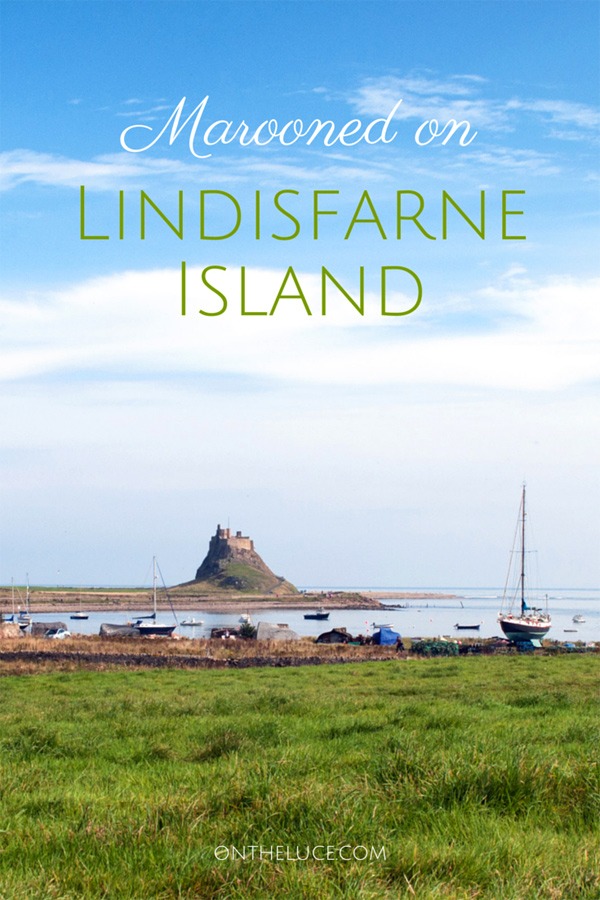 What a lovely way to explore by being stranded by the tide. That castle look impenetrable and would surly scare invaders off. How many people actually live on the island?

There are about 180 people living on the island (though I'm not sure how many stay there year-round or whether some are just there in summer) – must feel very remote in the depths of winter!

Getting stranded sounds like the best plan ever for visiting here. It just gets so busy.....we were amazed at the numbers of visitors last summer......but I remember years ago when it was much quieter and more atmospheric....so the stranding seems like the way to go. It's a place I feel for quiet contemplation rather than madding crowds :-)

I hear it can get incredibly busy in the summer, but autumn wasn't too bad at all and being stranded definitely helped!

What an amazing looking place. Looks more Nordic than English.

The boats are great aren't they? So much nicer than building some concrete shed and a fantastic way of reusing old materials.

Beautiful! Pinned that boats photo, what a creative and beautiful way to use remnants of the past. We'd love to visit this island some day.