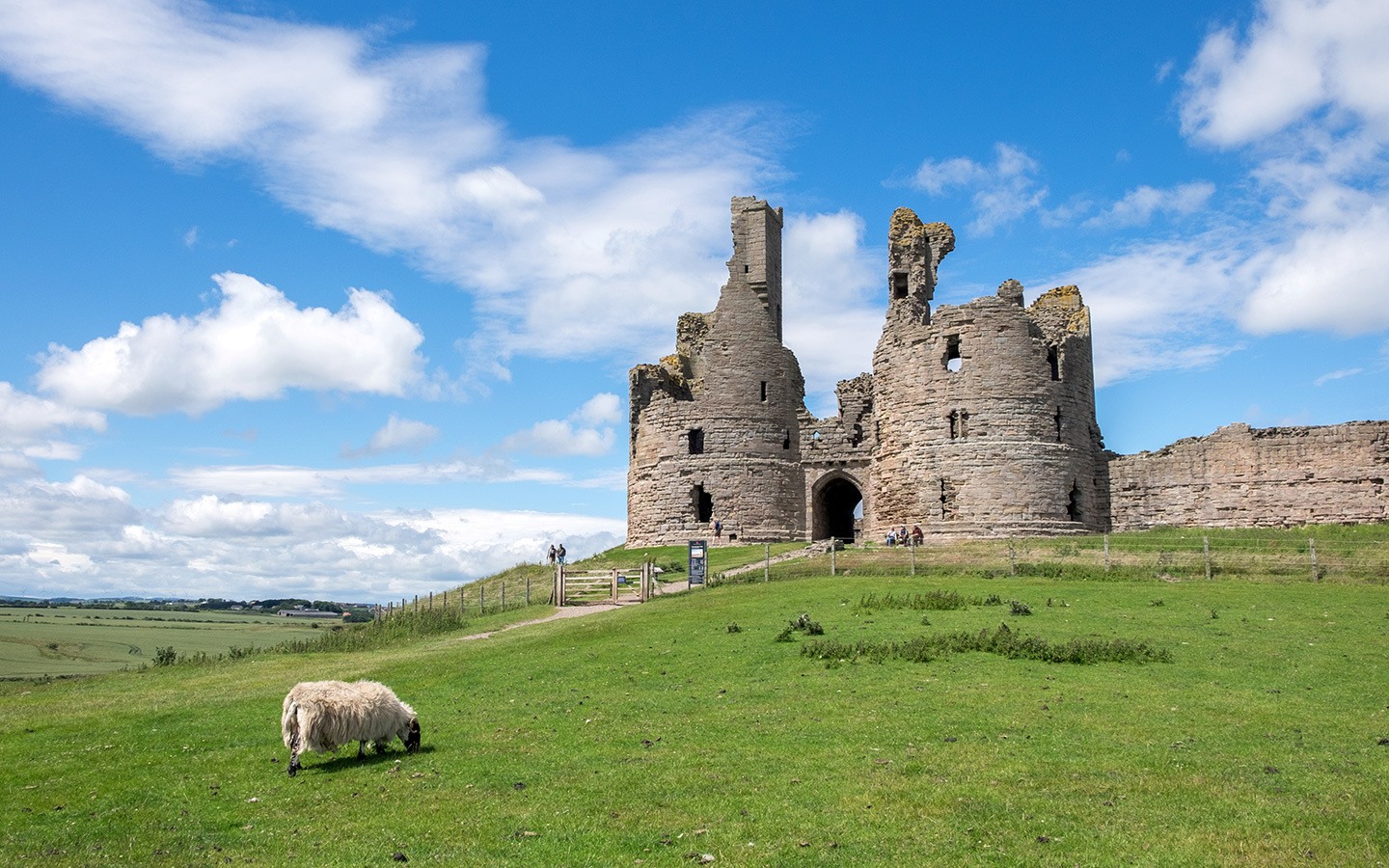 Rolling hills, sandy beaches, tiny islands, medieval castles and fantastic seafood – just a few of the reasons Northumberland is one of my favourite places in the UK. This part of northern England is home to one of the UK’s most beautiful stretches of coastline – so you’d think it’d be packed with people too. But there’s so much space you’ll have no problem finding a peaceful spot – whether you’re soaking up the sun or hibernating by the fire. So relax, take a deep breath of fresh sea air and join me for the perfect weekend in Alnwick in Northumberland.

Read more: Five of the best castles in Northumberland

How to spend a weekend in Northumberland 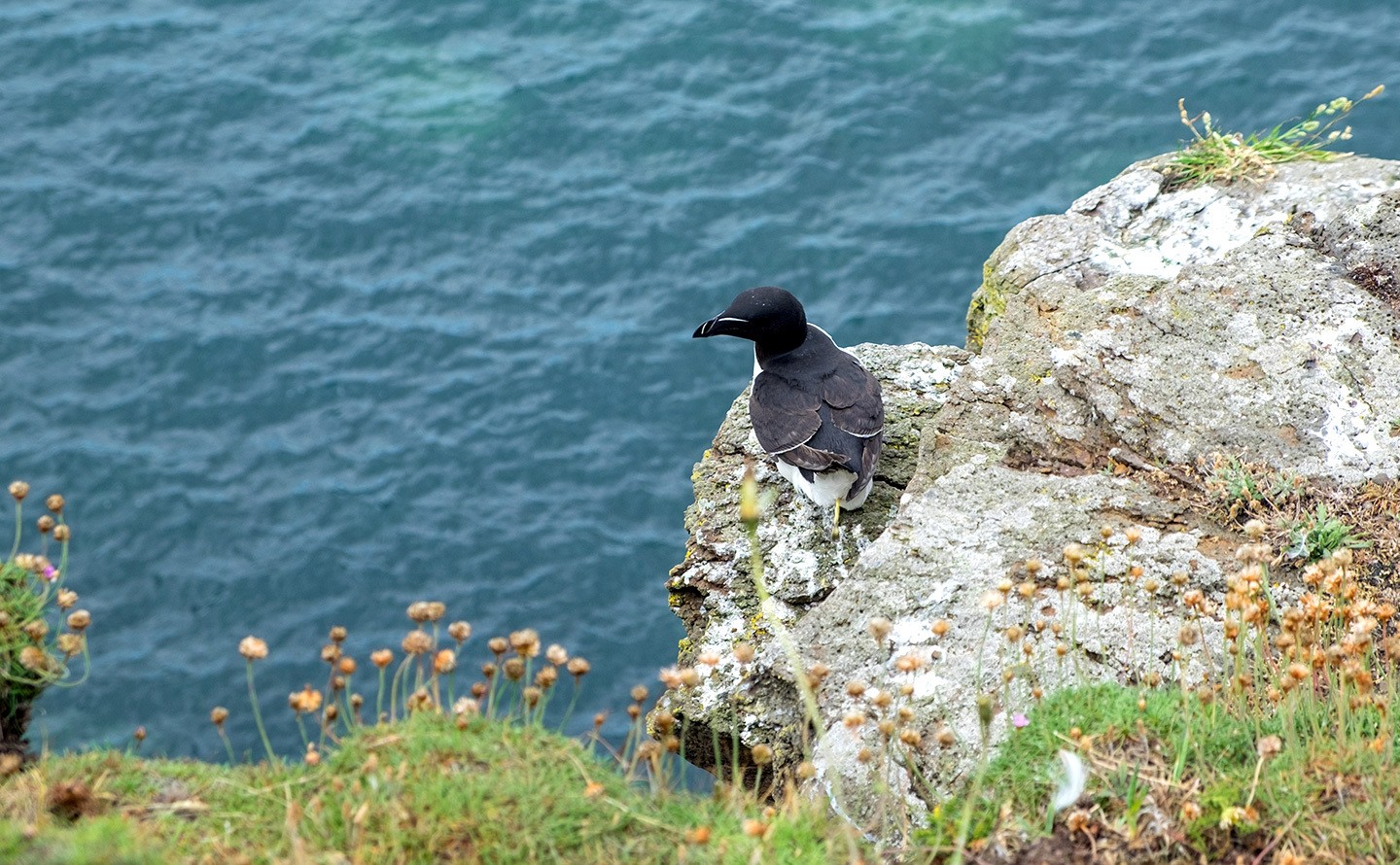 Check into the gorgeous Cookie Jar in Alnwick, a former convent converted into 11 luxurious rooms and suites. The interior designer worked for Hotel du Vin and it has that same luxe feel with dark walls, stylish prints, classic furniture and interesting curios. Rooms start from £160 or splash out on the Chapel suite, in an old chapel with arching ceilings and stained-glass windows. They also have a small bistro with a creative three-course dinner menu for £39.50.

Or if you’re on a budget, The Plough in Alnwick is a historic coaching inn which dates back to 1896. Inside it has a hunting lodge meets contemporary style décor. Its seven rooms start from £99 a night, bed and breakfast, and come with free cookies on arrival. The inn has a comfy bar with 40 different gins on the menu, and a restaurant which serves dishes using seafood sourced by their sister pub in nearby Craster and game from local Northumberland estates. 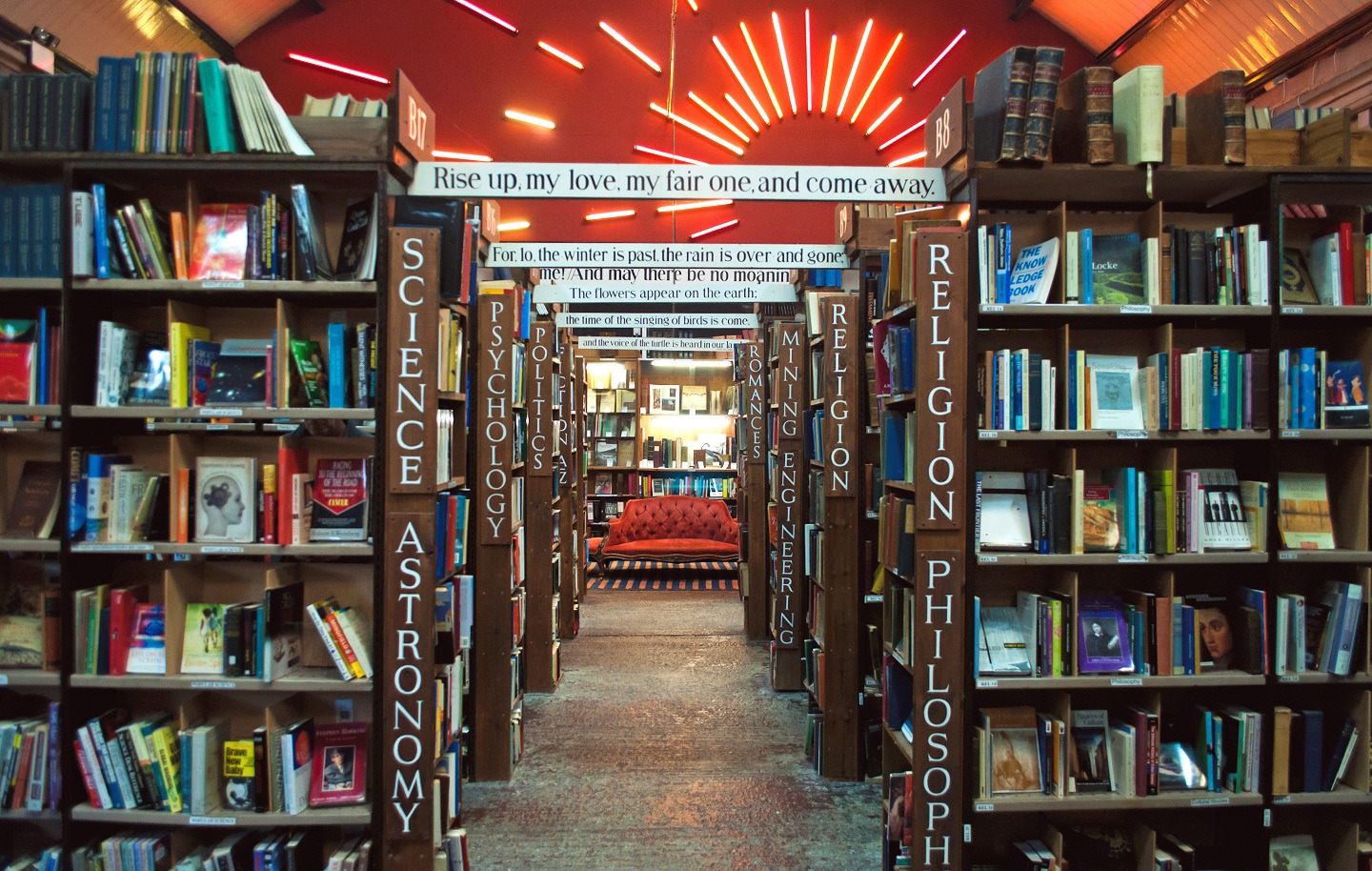 Start the day with a trip to Barter Books – ‘the British Library of secondhand bookshops’. After the local railway line closed in 1968, Alnwick’s Victorian train station was transformed into a book-lovers’ paradise, decorated with extracts of poems and a miniature railway. There are thousands of books, maps and manuscripts covering every subject you could think of.

It’s a real warren of a place, with lots of cosy nooks, fireplaces and armchairs to curl up in with a book (and if you want to take one away then you can either pay or barter with another book). The old station waiting room has been transformed into a café which is a great place for a late breakfast or an early lunch – the Northumbrian rarebit is a favourite. 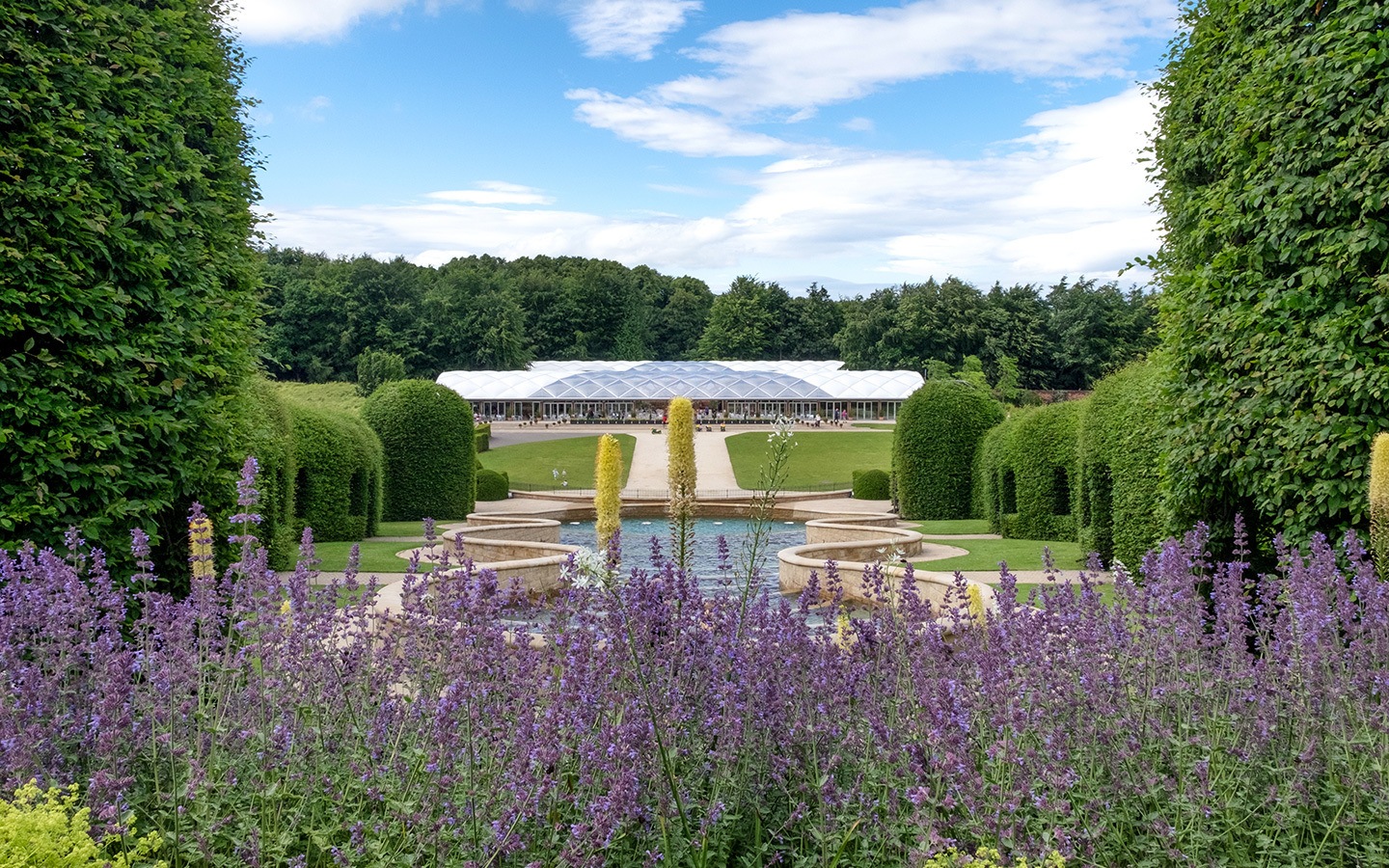 Next head over to Alnwick Castle and Garden (entry £26.10 for adults, £22.20 for concessions and £11.15 for children 5–16, but you can save a bit by booking online and tickets are valid for a year), starting off in the Alnwick Garden. The gardens were originally designed by Capability Brown for the Dukes of Northumberland in 1750. But they were dug up to plant fruit and veg during WWII and ended up overgrown and abandoned by the end of the 21st century.

In 1997 the current Duchess of Northumberland oversaw a complete restoration, redesign and replanting. The contemporary Alnwick Garden features a rose garden, cherry orchard, giant waterfall, water sculptures and bamboo maze. Don’t miss the fascinating Poison Garden – a chance to get up close (but not too close) to some of the world’s deadliest plants. 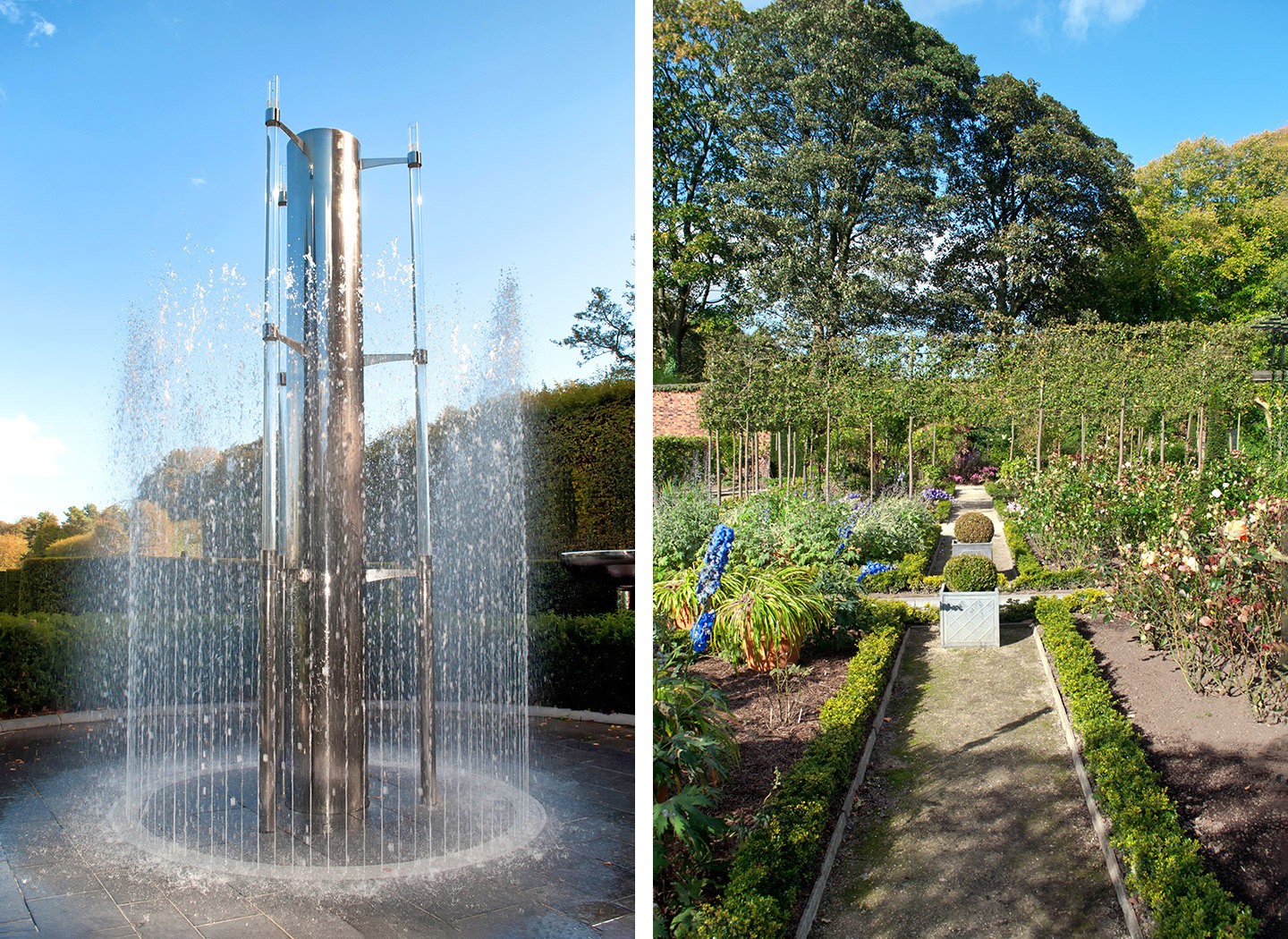 Then spend the afternoon at Alnwick Castle – one of the England’s biggest and most impressive castles in England. It’s been home to the Dukes of Northumberland for over 700 years. From outside it’s a perfectly preserved, storybook castle, all golden stone turrets, towers and lush green lawns. So perfect it’s a been a filming location for Downton Abbey and Harry Potter.

Potter fans can take broomstick-flying classes in the same spot as Daniel Radcliffe, or there’s Dragon Quest, dungeon tours and archery sessions. Inside the castle is just as lavish, and a tour of the state rooms takes you past priceless artworks, sparkling gilt and carved ceilings. But the castle is still the family home of the Percy family so it doesn’t have that dry, museum feel. 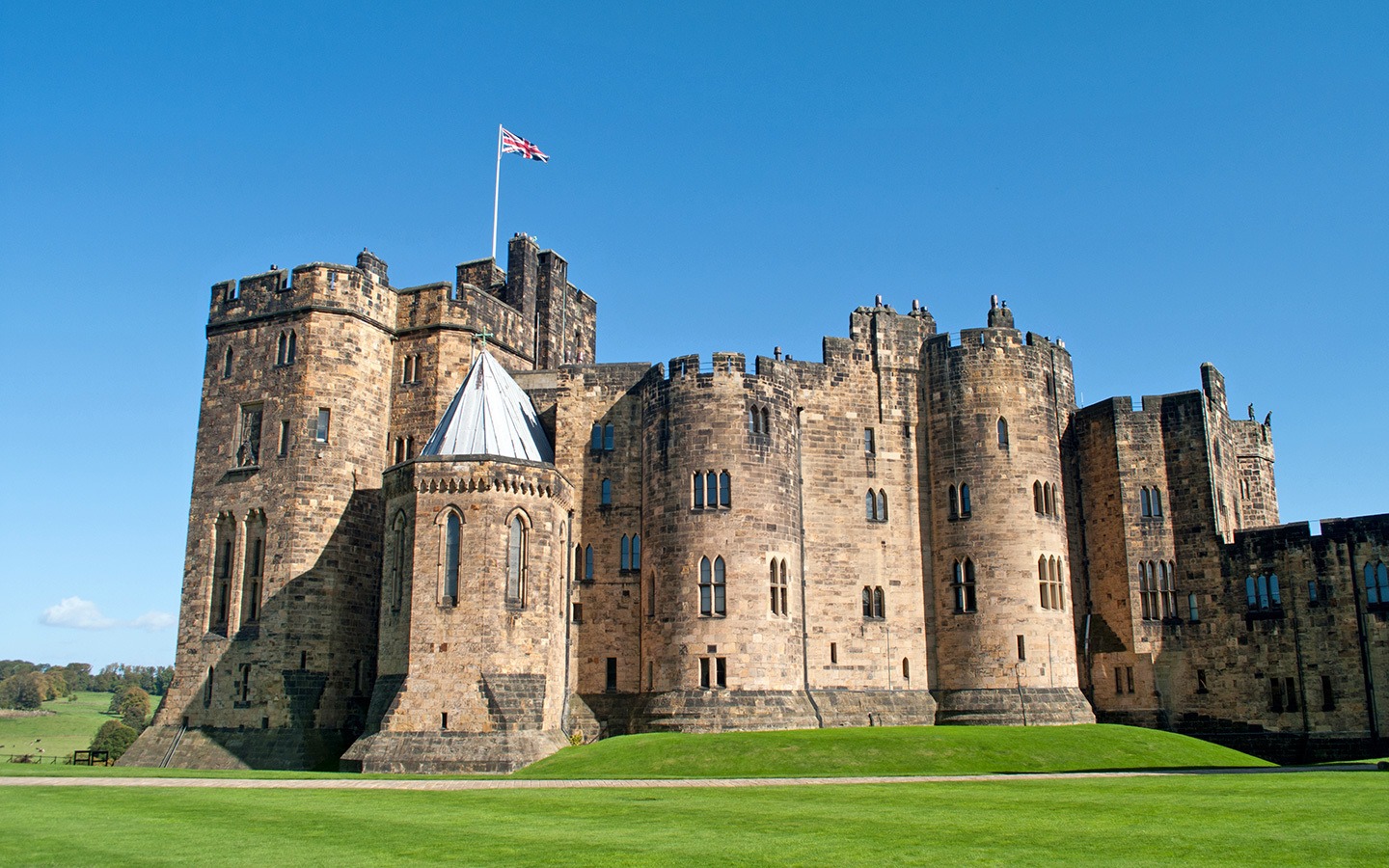 Pop into the White Swan in Alnwick for a pre-dinner drink – the unlikely resting place for interiors from the Titanic‘s sister ship. Some of the Olympic‘s fittings were bought by the pub’s owner when it was dismantled in the 1930s. The two ships were almost identical so it’s the nearest you can get to being on board the Titanic, with the ship restaurant’s revolving door, its grand oak staircase and wood panels and stained glass from the first-class lounge.

The head back to Anwick Gardens for dinner at the Treehouse Restaurant, set among the branches in one of the world’s largest treehouses (make sure to book in advance). Climb up through wobbly bridges and twisting tree trunks into a magical woodland wonderland which is draped in fairy lights. The menu features local fish, meat and seafood – and don’t miss the ‘Deadly Jane’ cocktails, created by the Duchess of Northumberland. 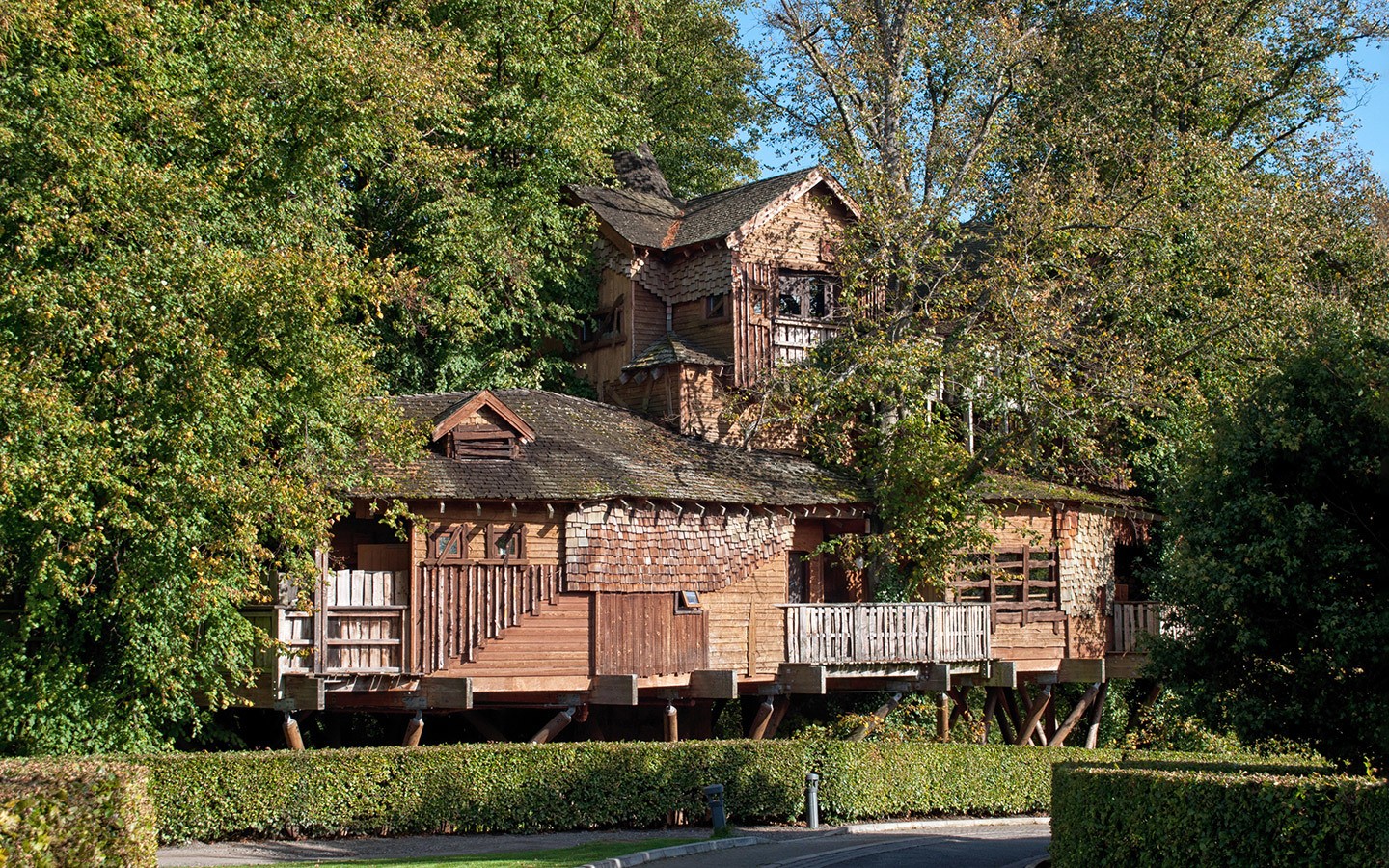 The following morning, blow away any cobwebs with a morning walk along the coast to Dunstanburgh Castle. Where Anwick Castle is picture-perfect, Dunstanburgh is a total contrast – remote, ruined and windswept. To reach the castle you follow the path along the coast for about a mile and a half from Craster, seven miles north-east of Alnwick.

The castle was one of the grandest in England in the 14th century, but the War of the Roses left it worse for wear, and the Northumberland weather finished off the job. Now it’s an atmospheric ruin that’s inspired writers and artists including JMW Turner. Entry is £5.90 for adults (£5.30 concessions, £3.50 children and free for English Heritage or National Trust members). Opening hours vary through the year, but if it’s closed you can still take a look from outside. 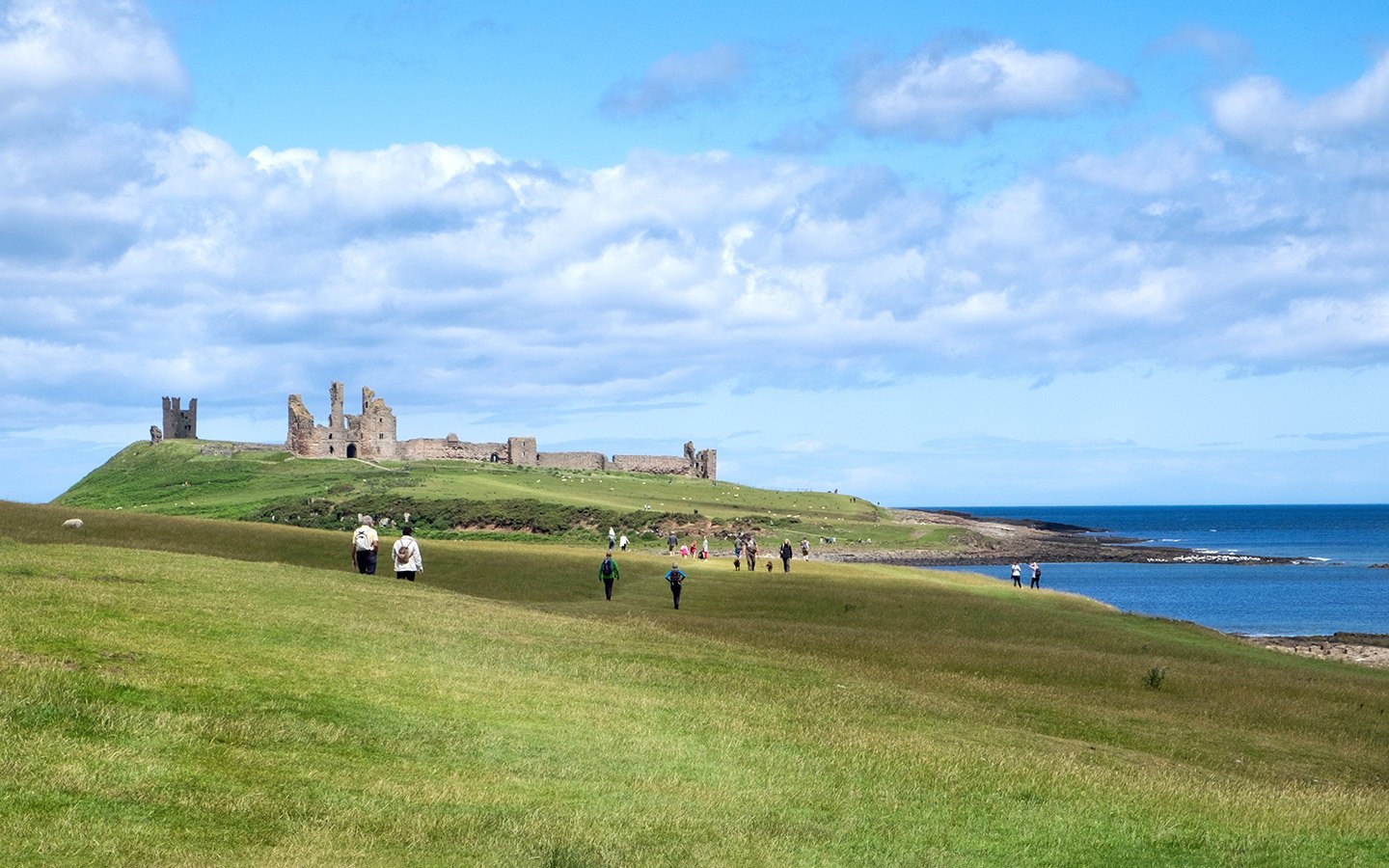 The walk to Dunstanburgh Castle

Back at Craster, refuel with some of the area’s fresh seafood. The town is famous for its crab, so grab a picnic table with a sea view in the garden at the Jolly Fisherman pub and choose between their rich crab soup or a doorstop-thick crab sandwich packed with silky crab meat.

Just across the street you’ll find another of Craster’s fishy specialities – kippers from L Robson & Sons. This fourth generation family business have been smoking herring and salmon in the same smokehouse for over 130 years. They have a shop where you can buy some to take home. 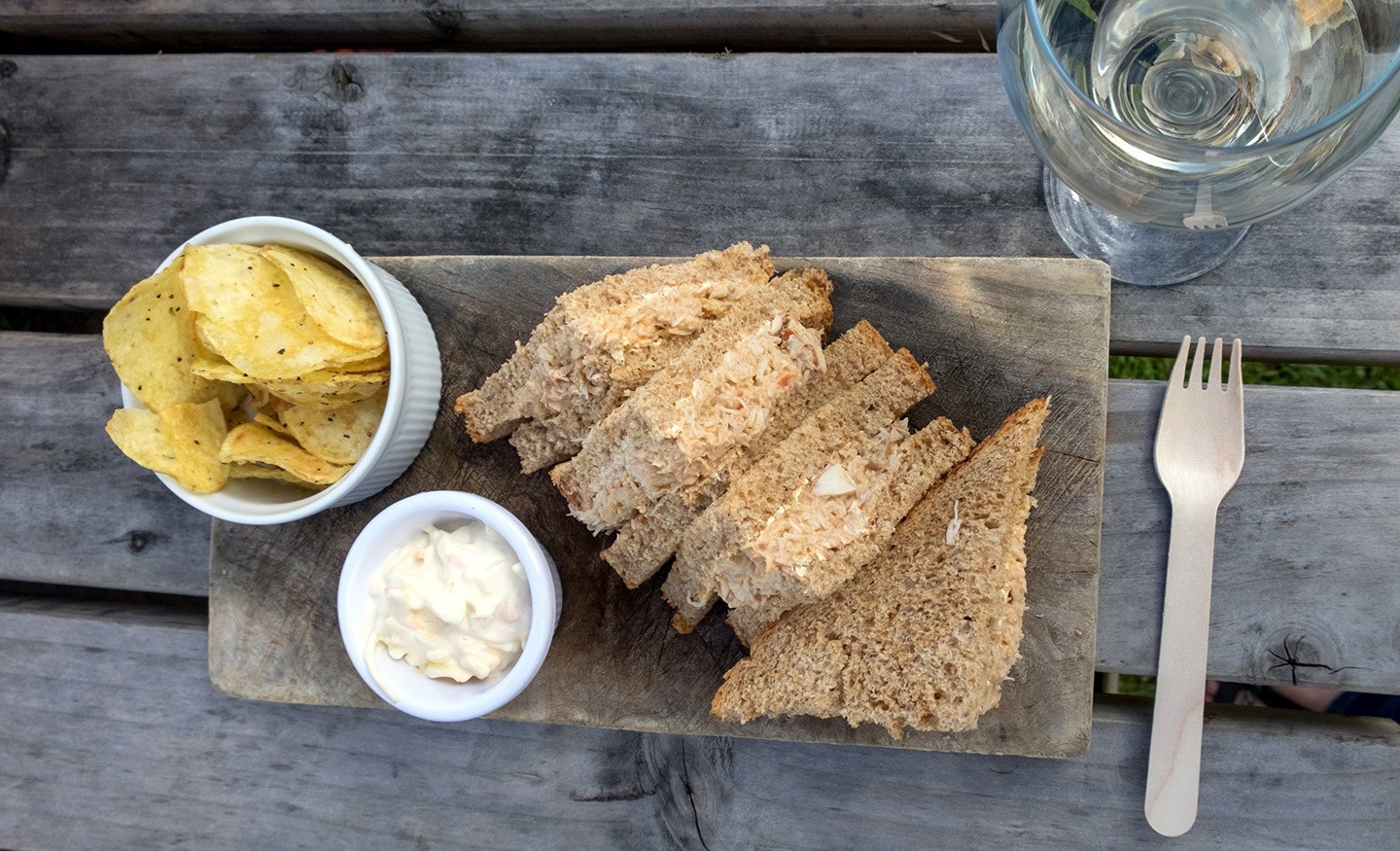 Then head three miles south to finish off your weekend in Alnick at Howick Hall Gardens and Arboretum (entry £8.80 for adults, £7.70 for over 60s and children free). The estate has been the ancestral seat of the Earls Grey since 1319 – including the second, tea-loving, ex-prime minister Earl. You can’t go into the house but you can take a walk around the gardens and arboretum.

And of course there has to be a cup of tea in there somewhere. The Earl had his special tea blend made with bergamot to hide the taste of lime from the well water on the estate and it was a big hit (though not with me, I think it tastes like soap!). But the Earl never trademarked the recipe, so he never received any royalties from it. The hall’s Earl Grey Tea House in a former ballroom serves up soups, sandwiches, scones and cake along with cups of Earl Grey. 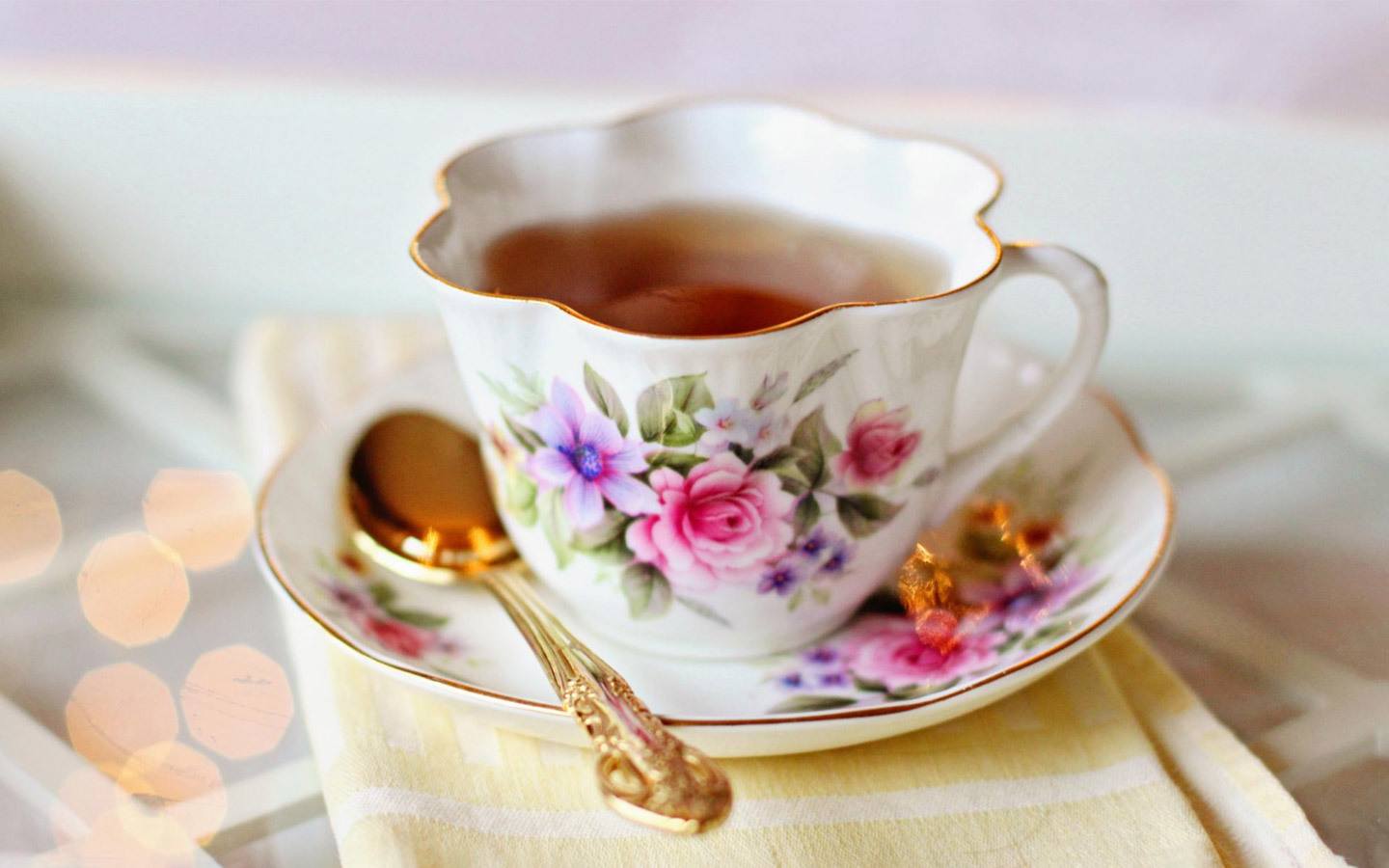 Have you visited Northumberland? Do you have any tips to add on what to see, do and eat? 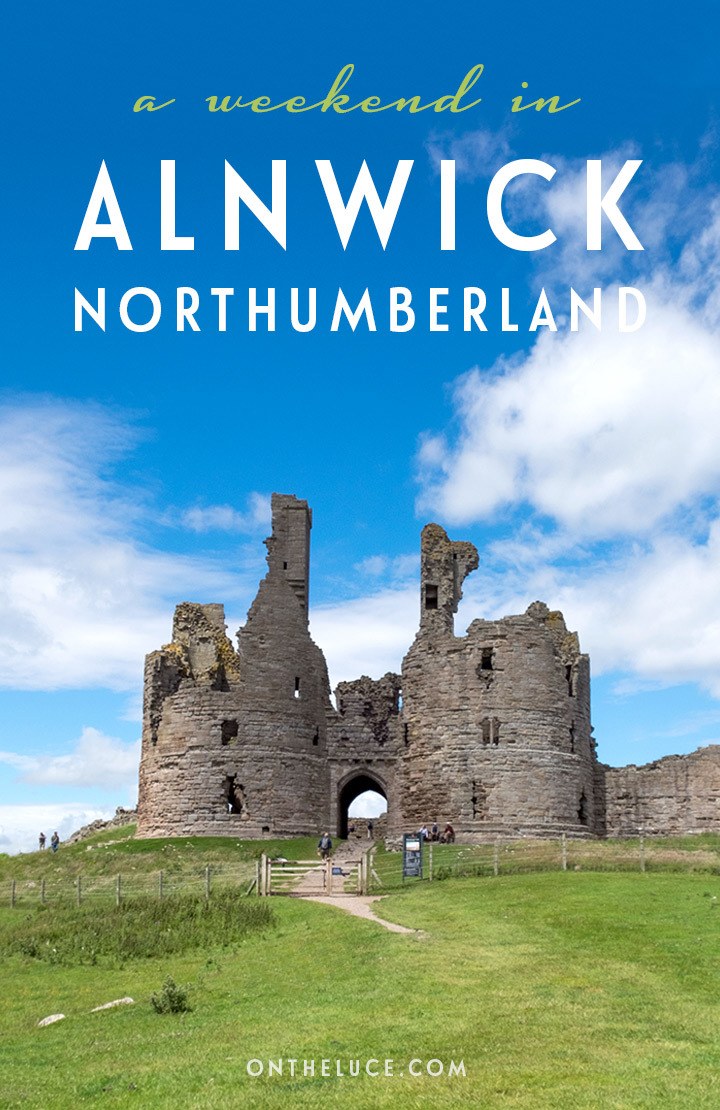 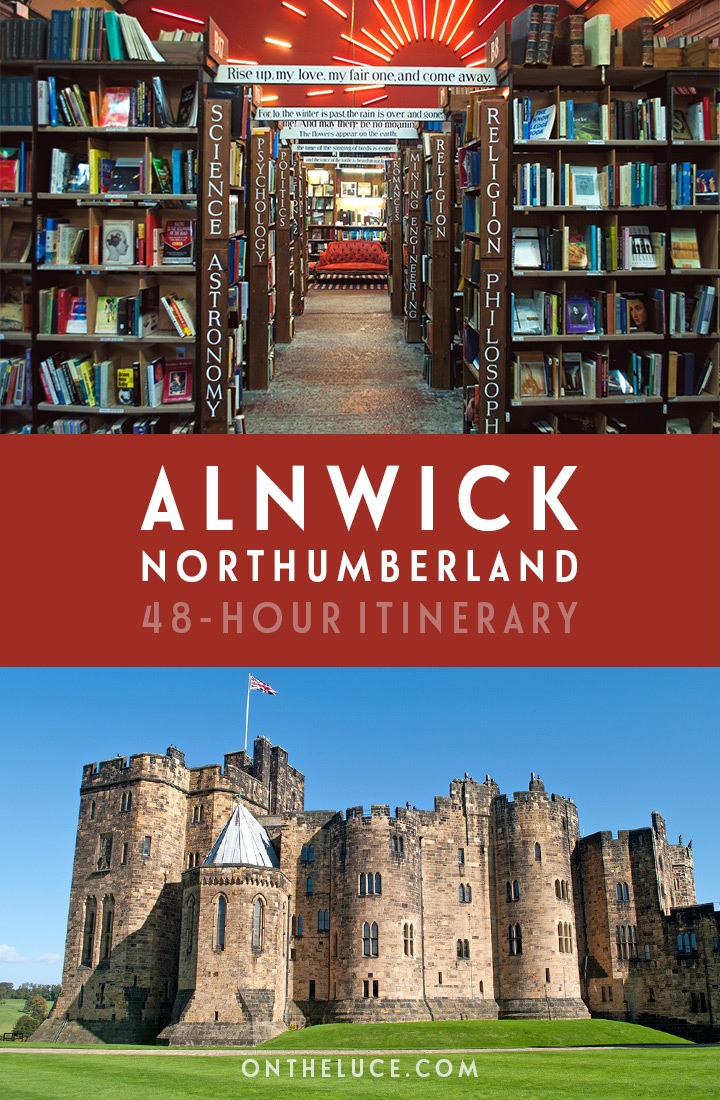 I can't wait for an extended trip to Northumberland for all that you mentioned plus the great footpaths, bike routes and long-distance trails.

Great post! I can't believe I've never visited Northumberland, it looks fab. I love discovering new places in the UK, they're often overlooked in favour of more exotic foreign locations but there are so many nice places to visit. I'll definitely be looking into that treehouse restaurant, that's right up my street!

The treehouse is amazing! Northumberland has so many fab places to explore – just wish it was a bit closer to home for me!

I've never been to Northumberland, but now I know I definitely need to visit Alnwick Castle!

Hope you get to make the trip sometime soon!

The light in Northumberland is exquisite! You've outlined so many reasons to spend some time here. I think Dunstanburgh castle would be at the top of my list and I would love to wander the grounds and then have a picnic of coaster crab sarnies with a lovely bottle of wine!

That sounds like a fabulous day! The light up there really is lovely – it's a wonderful place to photograph.