Discover England’s smallest city, from its historic cathedral and Bishop’s Palace to the springs that gave it its name and locations from the film Hot Fuzz, with this guide to things to do in Wells, Somerset.

Tucked between the Mendip Hills and Somerset Levels you’ll find England’s smallest city – Wells. Made a city thanks to its grand Gothic cathedral, Wells is a charming spot, with cobbled streets lined with medieval buildings, tearooms, pubs and old-fashioned shops. It also had a taste of movie stardom as the town of Sandford in the film Hot Fuzz.

Being within easy reach of Glastonbury, Bath and Bristol means this pint-sized cathedral city makes a great day trip. So here’s our guide to things to do in Wells, featuring the city’s highlights, from medieval buildings and picturesque streets to bell-ringing swans.

A brief history of Wells

Wells grew up around the three natural springs – or wells – which gave the city its name. They were thought to have medicinal powers, with one located in what is now the market place and the other two in the grounds of the Bishop’s Palace and cathedral.

After being the site of a Roman settlement, Wells became more important in Anglo-Saxon times when King Ine of Wessex built a minster church there in the 8th century. Its religious significance grew, and in 909 it became the seat of the newly formed bishopric of Wells.

Though not for long, as the bishop’s seat was moved to Bath in 1080 and Wells lost its cathedral status, until 1245 when the two were merged and the bishopric was renamed the Diocese of Bath and Wells. Since then it’s been the site of the Civil War ‘Siege of Wells’ and a battle in the Monmouth Rebellion (1685), but remains incredibly well preserved.

Things to do in Wells, Somerset

The highlight of Wells is its cathedral, which dominates the city. The current Gothic cathedral was built in the 13th century on the site of a Roman mausoleum and abbey church. It was one of the first Gothic cathedrals built in England and took 300 years.

And it’s the cathedral which turns Wells from a town to a city. Wells was given city status back in medieval times and it still keeps it now, despite only having 12,000 residents, which makes it a lot smaller than other UK towns like Reading and Northampton.

The cathedral’s imposing West Front has over 300 sculptures carved into it, from saints and angels to historic kings and queens. Inside there’s an array of stained-glass windows and the unusual ‘scissor arches’ across the nave. Their crossover shape was designed to brace against the weight of a tower which was added in the 14th century.

You can also climb up to the Chapter House, an octagonal room where the clergy meet to discuss church business. There’s an amazing staircase on the way up that’s been so worn down by hundreds of years of footsteps that the steps now undulate like waves.

Make sure to stay around to see the clocks chime. There are clocks inside and outside the cathedral. The interior astronomical clock is the oldest working mechanical clock in Britain, with Quarter Jack appearing from inside the clock to strikes the bells twice every quarter of an hour. And the clock outside uses the same mechanism but with two knights.

Just a short walk from the cathedral, the Vicars’ Close is tucked away down a side street. Head underneath the arched gateway into a peaceful cobbled street where you’ll find two neat rows of medieval stone houses with their distinctive tall chimneys.

The close is said to be the oldest purely residential street in Europe, and was originally constructed by Bishop Ralph of Wells in 1348 to house the priests serving in the cathedral choir – and keep them away from the temptations of life in town. And as well as the houses there was also a chapel, library and dining room for residents.

Over the years gardens were added and chimneys made taller. Some were knocked through to create bigger properties once priests were allowed to marry, so there are now 27 residences left, which are still occupied by the choir and other cathedral staff.

Now its beautifully preserved buildings are one of the most popular spots for photographers in Wells – though get there early to avoid the crowds. And if you take a walk up the close, see if you can see where it gets narrower. It was built slightly tapered, with the far end three metres narrower to give the illusion that it’s longer than it really is.

Built in the 13th century, the Bishop’s Palace has been the home of the Bishops of Bath and Wells for 800 years. The bishop still lives there today, but some parts of the palace are open to visitors. Though first you need to cross the moat and drawbridge.

Not the welcome you’d expect from a man of the church, but a 14th-century feud between the bishop and the city meant the palace was fortified to keep out any unwelcome guests, as well as showing off the church’s wealth and power. Even if you don’t go inside the palace it’s worth taking a walk around the moat to admire the views.

Inside you can visit the chapel and some of the interior rooms, including the vaulted undercroft and long gallery. And outside there’s the remains of the Great Hall, which fell to ruin after a previous bishop sold the lead from the roof to make some extra money.

The palace is surrounded by 14 acres of gardens, and among them is one of the natural springs which gave the Wells its name. Water still bubbles up at a rate of 100 litres a second, and flows out into the moat around the palace and on to the River Sheppey.

The moat is also home to the palace swans. Not your ordinary swans, the palace’s mute swans have been trained so that they ring a bell at the gatehouse every time they want to be fed – a tradition that dates back to a Victorian bishop’s daughter.

If you’ve seen Hot Fuzz, the 2007 comedy-action cop film starring Simon Pegg, the streets of Wells might look familiar. The film’s writer and director Edgar Wright grew up in Wells so it got a starring role on screen as Sandford, the seemingly idyllic English country town which hides a dark secret and a higher than expected murder rate.

Locations used in the film included Bishop’s Palace, St Cuthbert’s Church, The Crown pub and Swan Hotel. But one building you won’t find in the film is the cathedral. It was painstakingly painted out of every shot as it was too impressive a building for a small town.

Hot Fuzz fans can take a guided walking tour around Wells to see where it was filmed. Or you can create your own DIY tour using this map of the main filming locations. And don’t forget to pick up a Cornetto from the City News shop on the High Street.

The ‘Liberty of St Andrew’ – the original parish which housed the cathedral, Bishop’s Palace and Vicar’s Close, was protected by two grand entrance gates, known as the Penniless Porch and Bishop’s Eye, which still tower over Wells’ Market Place today.

These twin gates were built in 1450 by Bishop Thomas Beckington, with the Penniless Porch, also known as the Pauper’s Gate, designed to be a place people in need could get shelter while they begged for alms. You can take a look at both from the outside, or head inside the Bishop’s Eye as it’s now used as a wine bar and restaurant.

If you visit Wells on a Wednesday or Saturday, don’t miss the open-air street market in the Market Place. It’s been the commercial heart of the city for centuries and you can pick up fruit, vegetables and other local produce, flowers, jewellery, crafts and gifts.

Wells is packed with historic sights to explore. If you want to learn more about the area’s history, take a trip to the Wells and Mendip Museum. It was founded by a Victorian collector and has geological and natural history artefacts from the Mendip Hills.

There’s also St Cuthbert’s Church, Wells’ impressive parish church with its 15th-century panelled ceiling. You can also admire The Old Deanery, a 12th-century former ecclesiastical building next to the cathedral which is currently for sale for £1.1 million.

And if you fancy a drink with a side of history, head to the City Arms, in what used to be Wells’ City Gaol. It dates back to 1549 and still has the original barred windows, locks and chains – and is also supposedly the most haunted place in Wells.

Wells is around 20 miles south of Bristol and Bath, or 128 miles (3 hours’ drive) east of London. There’s car parking at Union Street (BA5 2PQ), Princes Road (BA5 2DT) and South Street (BA5 1SN), all of which are a short walk from the centre.

The nearest airport is in Bristol, which is around 30 minutes’ drive from Wells. Or you can catch the Bristol Airport Flyer bus to Bristol Temple Meads train station (25 minutes) and the bus from there to Wells. There are also direct National Express coaches from London Victoria and Heathrow Airport to Wells, which take around 3.5 hours.

Where to stay in Wells

The Best Western Swan Hotel* is right at the heart of Wells, overlooking the cathedral. This converted 15th-century coaching inn has 48 bedrooms (including the smart Cathedral Suite with its brass bath), a restaurant and a bar and terrace with cathedral views.

Or just a mile outside the city, Beryl Country House* is a luxurious bed and breakfast with six bedrooms. It’s a trip back in time to the elegant era of travel, with antique furniture and curios, and complimentary tea and cake served on a china tea set. There’s also an outdoor pool and a peaceful countryside setting surrounded by the Mendip Hills.

Looking for somewhere to stay in Wells?* 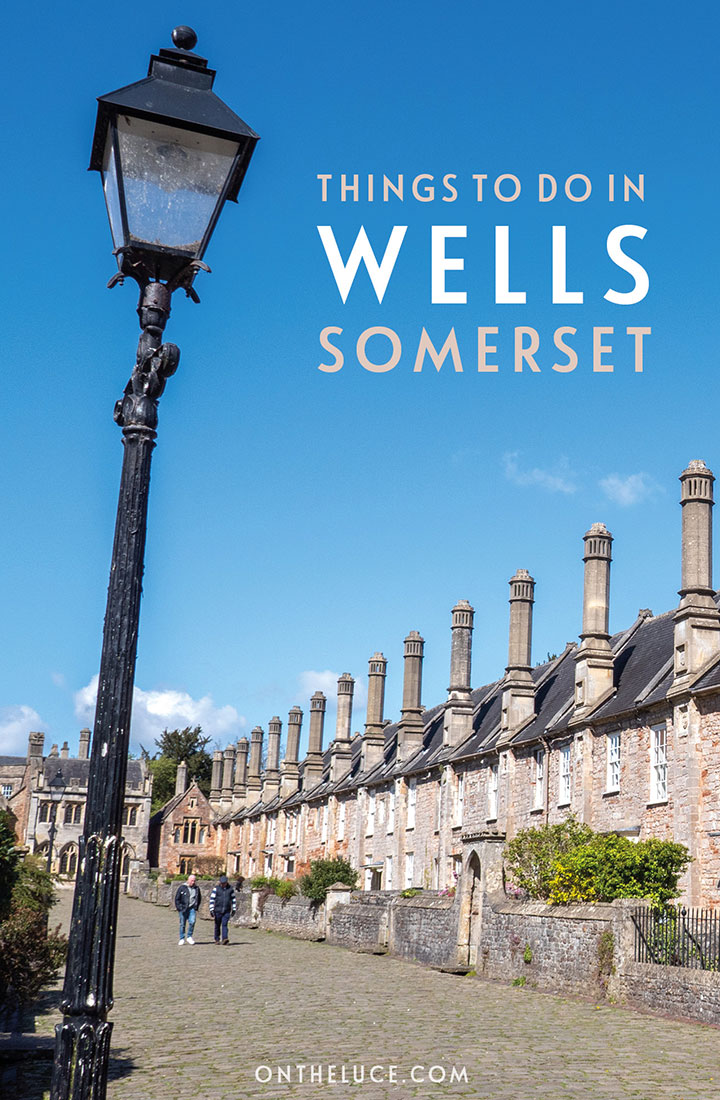 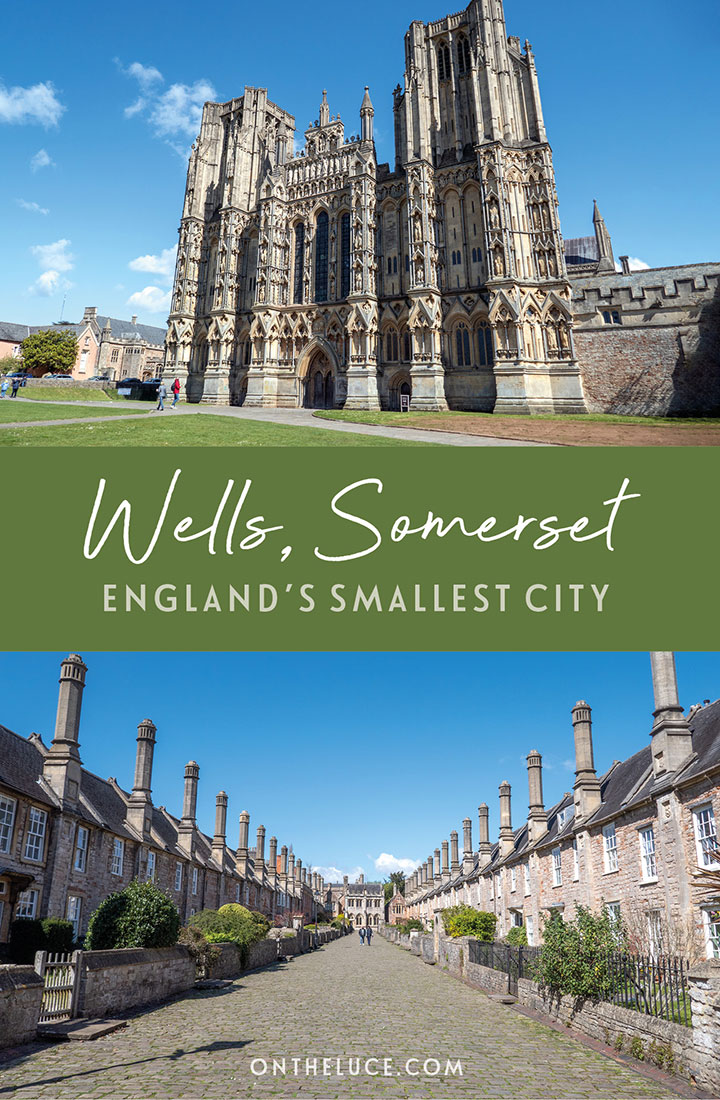