I love a good train trip and have travelled by rail across Europe and beyond. But there are plenty of fantastic rail adventures close to home in the UK too, from Cornish coastal trains to the wild Scottish highlands. And the country’s relatively small size means you can pack a lot into a short time. Whether you’re looking for history and culture, coast and countryside scenery or the UK’s coolest cities, there’s the perfect British rail trip for you. So here are five great itineraries for exploring Britain by train, all of which you can do in a week.

This rail trip takes you across England and back through time, featuring some of the country’s most impressive castles, cathedrals and colleges. Start off with a full day in London, choosing from its selection of historic buildings, museums and monuments, including the Tower of London, Westminster Abbey, British Museum and Shakespeare’s Globe.

Then catch a morning train to Salisbury (1.5 hours). This riverside city is known for its 13th-century cathedral, where you can see one of the surviving copies of the Magna Carta and take a tour of the tower. Or travel back 2000 years to Roman times at Old Sarum.

Next travel on to Bath Spa (1 hour). Bath is known for its Roman history, so don’t miss the Roman Baths – and you can soak yourself in the modern version at the Thermae Spa with its rooftop pool. There’s also the beautiful Georgian architecture of the Royal Crescent and Circle, and whole festival dedicated to Jane Austen who lived in the city in the 1800s.

Travel on to Oxford (1 hour 20 mins), one of the UK’s most famous university cities. Take a tour of the college quads – Harry Potter filming location Christ Church is the star, but All Souls, New College and Hertford are my favourites. Call in to the quirky Pitt Rivers Museum to see its shrunken heads before catching the train to Stratford-upon-Avon (1.5 hours).

Spent the afternoon in Shakespeare’s home town – you can visit his birthplace, school and the houses his wife and mother lived in, and see one of his plays at the RSC theatre. Then finish your trip in York (4 hours). Walk the Roman city walls, visit the Minster, explore the cobbled lanes of the Shambles and have afternoon tea at Betty’s before heading home.

This Scottish rail itinerary takes you from the lowlands to the highlands via rugged coastlines, lakes, moors and castles. Start in Edinburgh and spend the day discovering the city’s highlights, from Edinburgh Castle and the Royal Mile to the Palace of Holyroodhouse and views from Calton Hill. Or discover hidden gems like the underground Mary King’s Close.

Then catch the train on to Glasgow (1 hour), where the focus is on art, design and culture – from street art trails and the eye-catching modern Riverside transport museum along the redeveloped waterside to the Art Nouveau buildings of Charles Rennie Mackintosh.

Next head north to Fort William (3 hours 45 mins), a lochside town that’s a hub for adventure sports in the nearby Nevis Range. The journey takes you into the Scottish Highlands along the West Highland Line, rated as one of the most scenic rail trips in the world.

Rejoin the West Highland Line to travel across the Glenfinnan Viaduct to Mallaig (1.5 hours) – or from April to October you can upgrade to a ride on the Jacobite steam train, made famous in the Harry Potter films. Then leave the train behind and cross over to the Isle of Skye by ferry. Explore the island by bus or tour before crossing the bridge to Kyle of Lochalsh.

Catch the train from Kyle of Lochalsh to Inverness (2 hours 40 mins), the capital of the highlands. The Kyle Line is another of the UK’s top scenic train routes, passing lochs, mountains and herds of deer. Explore Inverness’ castle and riverside, take a monster-spotting trip on Loch Ness or visit the historic Culloden battlefield.

Then finally you can catch the train back to Edinburgh (3.5 hours) – or if you’re heading to London then there’s also an overnight sleeper train (11 hours).

This UK train trip takes you to the far south-west of England, along some of Cornwall’s most beautiful coastal and countryside railways. Start off in the arty seaside town of St Ives, home to the Tate and Barbara Hepworth galleries along with beautiful beaches and coastal walks.

If you’re travelling from London you can get reach St Ives on the Night Riviera overnight sleeper train (8 hours), changing at St Erth onto the St Ives Bay Linewhich runs past the golden sands of Carbis Bay. Then travel east to Falmouth (1.5 hours), changing in Truro onto the Maritime Line which runs through unspoilt countryside to the coast.

Visit Falmouth’s castle and maritime museum, or take a boat ride along the Fal River or across to neighbouring St Mawes,. Then catch the train to St Austell (1.5 hour) and change onto a bus to reach the Eden Project, whose two giant biomes bring the tropics to Cornwall.

Head back to St Austell to catch the train along the Atlantic Coast Line to Newquay (2 hours). Check out Newquay’s 11 beaches, watch the surfers in action on Fistral Beach – or give it a try yourself. Then travel on to the pretty fishing village of Looe (3 hours). The Looe Valley scenic train line connects Liskeard and Looe, running along an estuary full of birdlife.

Walk the South West Coast Path or visit the marine nature reserve of Looe Island, and make sure to try some local seafood and a traditional Cornish pasty before travelling on to your final stop in Plymouth (1 hour). Take a walk along the city’s waterfront, visit the aquarium and climb Smeaton’s Tower lighthouse before heading home – or exploring more of Devon.

This city-centric train route takes you to some of the UK’s coolest cities, with coffee shops, vintage shops, street art and quirky bars along the way. Start off in London and the East End’s most hipster neighbourhood – Shoreditch. Visit Brick Lane market, take a graffiti tour and try food from around the world at the Box Park shipping container pop-up market.

Then catch the train south of London to Brighton (1 hour 15 mins) for a day at the seaside. Visit the Brighton Pavilion, shop the narrow streets of the Lanes and play the slot machines on the pier before tucking into fish and chips on the beach.

Next travel west to Bristol (1 hour 40 min). This harbourside city is a centre for independent food, art and craft businesses . Try tasty street food at St Nicholas Market or at Cargo in Wapping Wharf, and go Banksy spotting in Stokes Croft.

Catch the train north to Manchester (4 hours). This north-west city famous for its football music is a great place to catch a gig or shop for vinyl and vintage fashion before a night in the Northern Quarter’s bars and clubs. Or visit the museums and media hubs of Salford Quays. Then from Manchester, it’s only a 45-minute train ride to local rivals Liverpool.

Check out the exhibits at the Tate Liverpool and Merseyside Maritime Museum in the Albert Dock, or take a Beatles tour and the ferry across the Mersey. Then finally travel north-east to Leeds (1.5 hours). Follow the Leeds Welcome Art Trail, visit the Corn Exchange for indie shops in a stunning setting, sunbathe in Roundhay Park and tour Leeds’ craft breweries.

Wales and the Borders

This final Britain by train itinerary takes you across Wales, travelling from the capital through the unspoilt Welsh Marches to the spectacular coastline and mountains of North Wales. Start in Cardiff and spend the day exploring its historic side at the castle and its modern side among the contemporary buildings of redeveloped Cardiff Bay.

Then catch the train north to Shrewsbury (2 hours), a traditional market town across the border which was home to Charles Darwin. Visit its castle and take a boat trip on the River Severn. Then head back into Wales and the coastal town of Aberystwyth (2 hours) – a seaside holiday favourite with its sandy beach, Victorian promenade and Wales’ oldest pier.

Next catch the scenic Cambrian Coast Line north through Snowdonia National Park to Harlech (3 hours). Enjoy the views as you cross the estuary at Barmouth along the way. Then explore Harlech’s hilltop castle or take an afternoon trip to the nearby quirky, Italian-style village of Portmeirion (the closest station is at Minffordd, 15 mins from Harlech).

Next head to Porthmadog (25 mins) where you can change onto the Ffestiniog Railway’s historic steam trains to travel to Blaenau Ffestionig in style (1 hour 15 mins). Then rejoin the 21st century back and travel onwards to Llandudno (1 hour 15 mins), another of Wales’ Victorian seaside resorts with panoramic views from Great Orme.

Then travel across the border to Chester (1 hour). Explore the city’s Roman ruins, walk its walls and shop the medieval black and white Rows. Then finish the trip by heading back to Cardiff (3 hours), passing the Pontcysyllte Aqueduct and Shropshire Hills along the way.

Read the full Borders and Wales by train itinerary 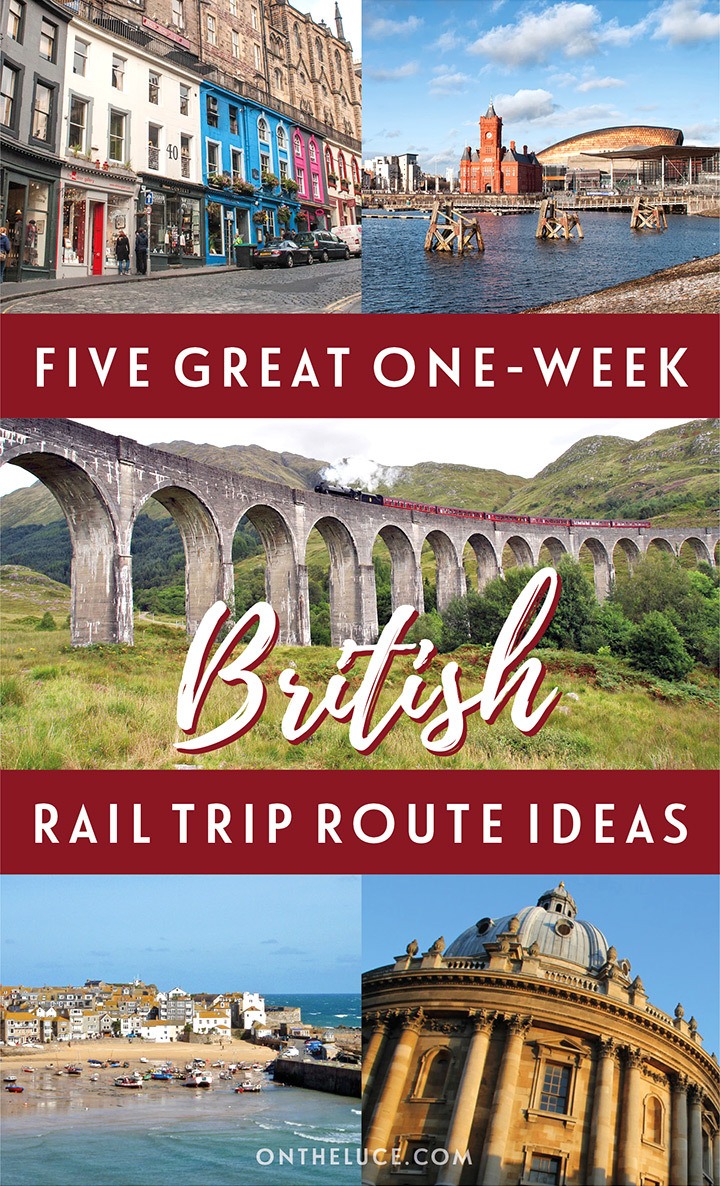 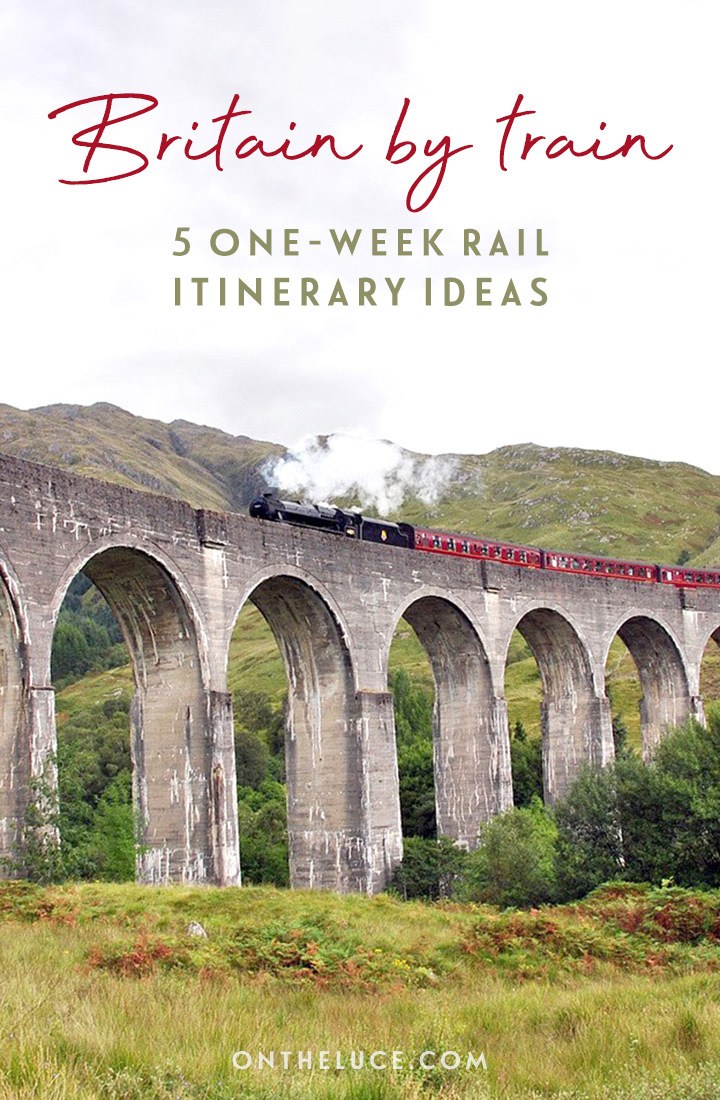