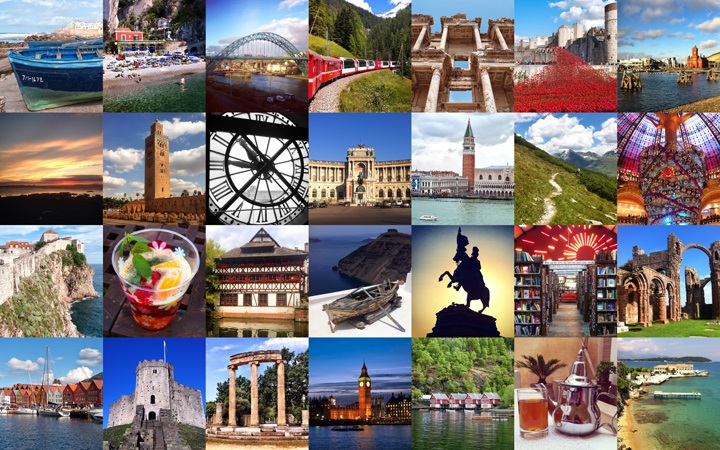 Looking back on the last 12 months, 2014 has been a year of travel surprises. There have been a couple of trips I never imagined I’d be taking, some unexpected destinations, plus the odd travel disaster when things didn’t go quite to plan (oh Canada!). But altogether it’s been a great travelling year, with return trips to a few old favourite destinations as well as some great new discoveries across Europe and in the UK. 2014 has also been the year of the ‘Take 12 Trips’ challenge. Back at the end of the last year I joined in the challenge to take at least one trip each month. It could could be anything from an international trip to a local weekend or even a day out, but you had to incorporate some travel into every month. So how did the challenge go? Here’s my monthly travel roundup of 2014…

After getting out of hibernation mode and dragging myself away from the fire, my first trip of the year was up to Manchester. As well as catching up with friends I also saw a bit more of the city with a visit to the People’s History Museum and a fab afternoon tea at Sugar Junction. I also went down to London to interview traveller and adventurer Ben Fogle, followed by a photography session along South Bank at dusk. 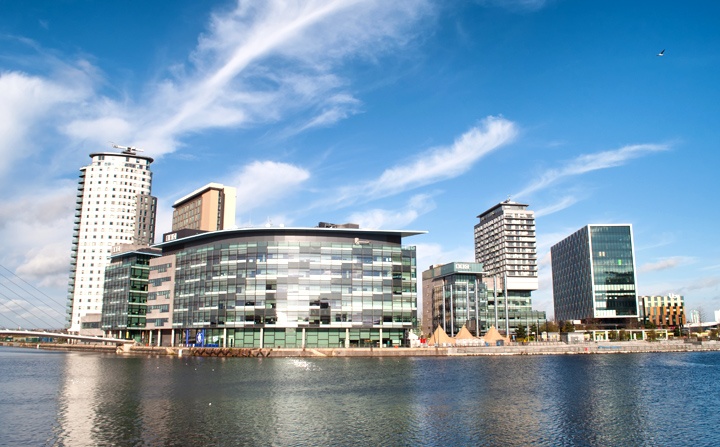 February saw me heading further north to Newcastle for the Traverse travel bloggers conference. My first bloggers conference was a real inspiration, both from the sessions at the event but also from meeting so many of my favourite bloggers in person at long last. I also got chance to have a quick look around the city of Newcastle from our base in Gateshead, connected by the bridges across the Tyne. 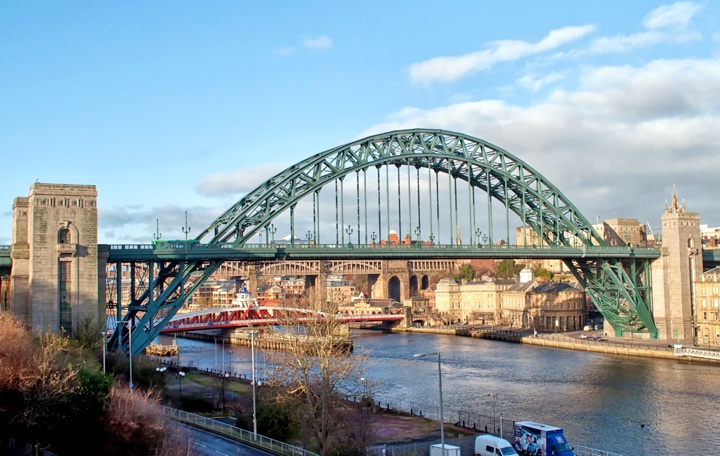 The Tyne Bridge in Newcastle, as seen from the Sage Gateshead

By the time it got to March I was in desperate need of some sunshine, so I headed out to Morocco with my husband for a mini-honeymoon with a touch of luxury. We totally fell in love with Essaouira on the coast, from the blue fishing boats in the harbour to the sunsets over the ramparts. In between relaxing on our riad roof terrace we learnt how to cook Moroccan style and wandered through the medina and along the wide sandy beach. Marrakech was all kinds of crazy after Essaouira’s laid-back pace but we found ourselves another gorgeous riad bolthole for when the madness of the souks got a bit too much. 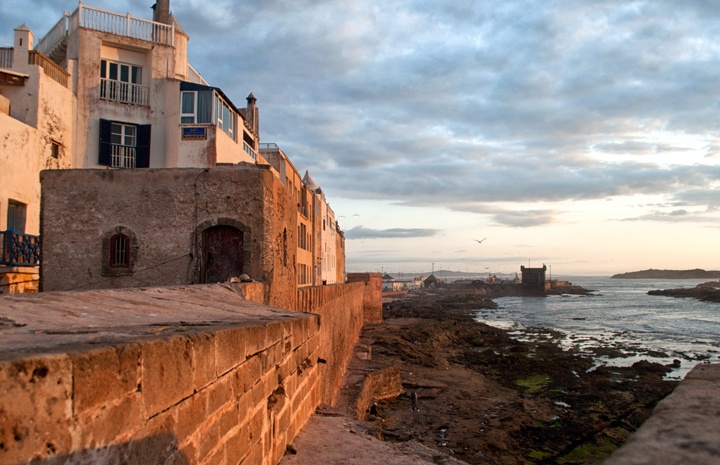 The Essaouira ramparts glowing as the sun goes down

April was a quiet one with a long Easter weekend back home in Herefordshire. I made couple of trips to London, where I took my sister on a birthday tourist day with a tour around the Houses of Parliament, lunch at Westminster Abbey and an afternoon in Hyde Park. It reminded me how many things I still have left to see in London despite spending ten years living there. I also got to talk wine with the fantastic Oz Clarke – probably the easiest interview ever as he never stopped talking and had so many great stories! 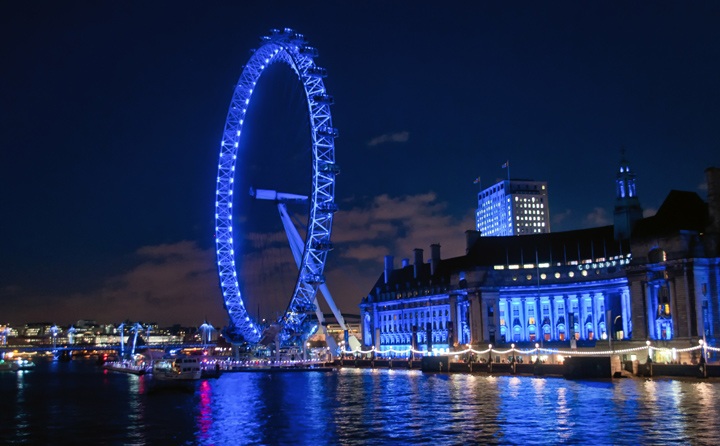 The London Eye at night

May was my busiest month yet. After talking about it for years I finally made it to Norway with my mum, where we explored the pretty city of Bergen before taking a scenic train ride out to Flåm. The scenery of the fjords was just unbelievable, and I can’t wait to go back and explore more of Scandinavia (once I save up). I’d only just unpacked from this trip when I was onto the next, traveling to Catania in Sicily to try out a new Celebrity Cruises shore excursion. We toured the city’s food markets as well as learning to cook like a Catanian up in the foothills of Mount Etna. Then right at the end of the month I took a quick jaunt to Liverpool, just long enough to get a taste for the city and explore the renovated Albert Dock. 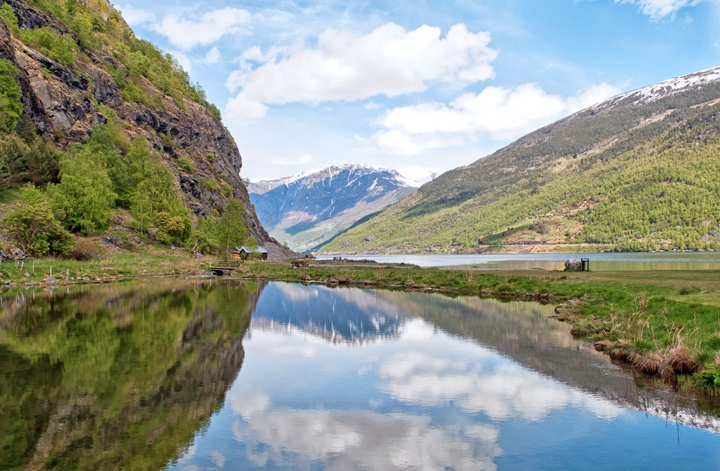 Reflections in the fjord from Flam

June saw me doing something I never imagined I’d do – taking a cruise around the Mediterranean! Despite being a pair of boat-phobes and total cruise novices, my mum and I ended up as complete converts after a week on board the Celebrity Equinox and are already planning our second cruise trip. Our route started off in Venice in Italy, before sailing down the coast of Croatia to Dubrovnik where we walked the city walls. Next was Greece with stops in Corfu and stunning Santorini, as well as at the site of the original Olympic Games in Olympia. From there it was on to Ephesus in Turkey before we finished up our trip in Istanbul. 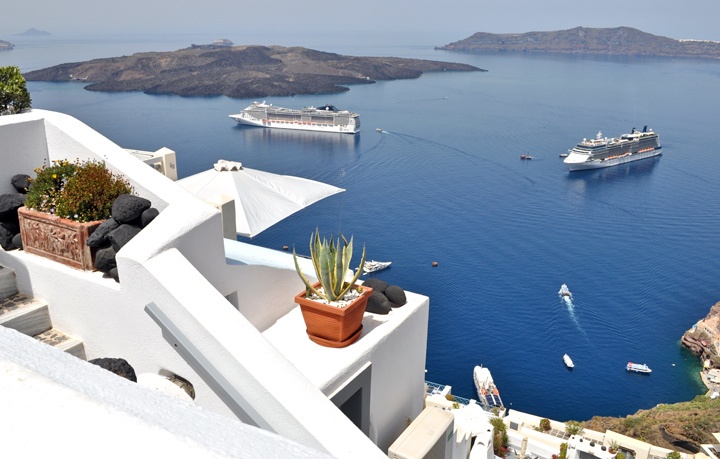 Cruise ships down in the caldera in Santorini

July was all about the journeys too, but this time it was back on dry land with a rail trip around Europe. We started off in France where I celebrated my birthday with fireworks and light shows among the canals of Strasbourg. Then we travelled up into the Swiss Alps, along one of the world’s most scenic train lines. We crossed over into Austria to spend a few days in the ski resort of St Anton, for my first taste of summer up in the mountains. Then our final stop was Vienna, where we wandered through fairytale architecture, visited the Spanish Riding School and Schönbrunn Palace, and tried to escape the sweltering heat. 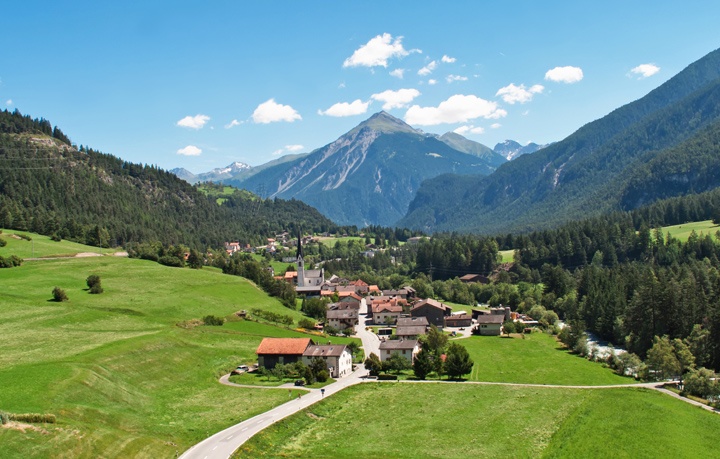 Swiss mountain villages from the train through the Alps

August was spent close to home, with trips around Herefordshire and Gloucestershire, plus plenty of weekend BBQs in the garden. I travelled in style on a vintage car rally to Chavenage House in the Cotswolds and visited the fascinating medieval Mappa Mundi in Hereford. I also paid a return trip to my old home city of Oxford as well as visiting the former wartime codebreakers’ base at Bletchley Park. 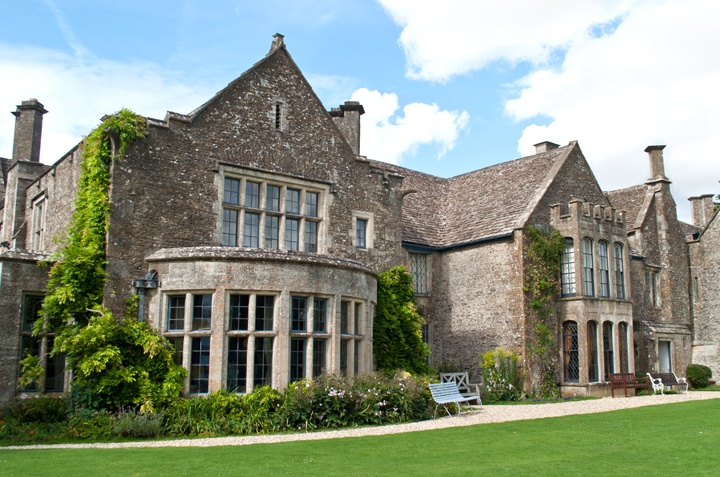 Chavenage House in the Cotswolds

September started off well with a sunny trip to beautiful Northumberland, where we rented a house overlooking Lindisfarne Island and spent the week exploring castles and ruined priories. But it all went wrong en route to Canada. A delay to our first flight meant we missed our connection, and a combination of a four-hour queue to rebook, a seat shortage following a pilots’ strike and lost bags on the way to London meant we spent our first wedding anniversary in the airport. With only a short time in Quebec we ended up cancelling the trip and rescheduling for next year – with a refund and compensation to ease the pain a bit! 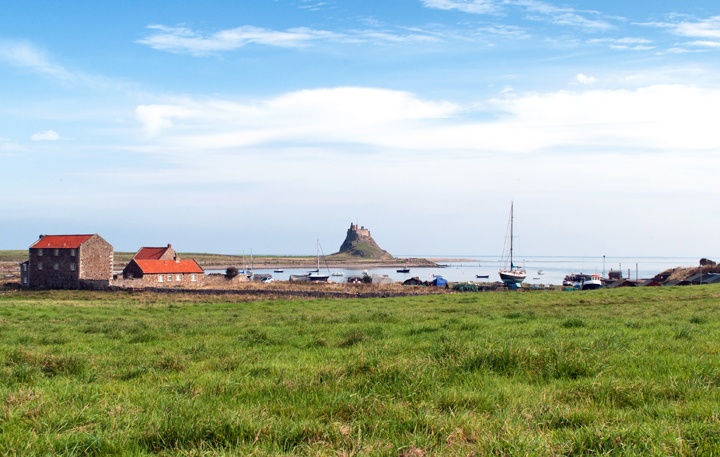 Looking across the island to Lindisfarne Castle

October saw me head back to Italy for the third time this year, to one of my favourite parts of the country for a week on the Amalfi Coast. We were based in the peaceful hillside town of Praiano, away from the worst of the crowds and crazy traffic, where it was still plenty warm enough to sunbathe on the terrace and swim in the sea. When we did manage to drag ourselves away we took a return trip to lovely Sorrento as well as exploring the buried Roman ghost city of Herculaneum. 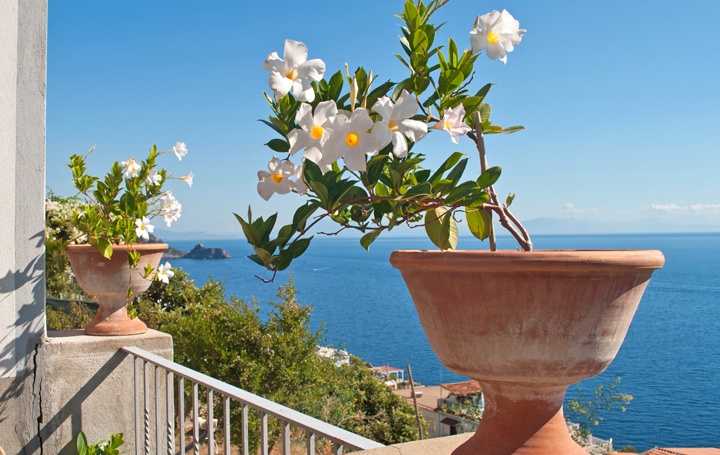 Flowers on the balcony of our Amalfi Coast apartment

November was all about short trips around the UK. I headed back to Manchester to tour the BBC studios in Salford Quays and take a trip on board Concorde, then was back up north again for a first visit to the beautiful Peak District. It was misty and cold, but perfect for hiding out in our cosy cottage, as well as taking a trip to see Chatsworth House’s fabulous Alice in Wonderland-themed Christmas decorations. I also took a couple of trips to London, to get travel inspiration for 2015 at the huge World Travel Market exhibition and to see the incredibly moving display of remembrance poppies at the Tower of London. 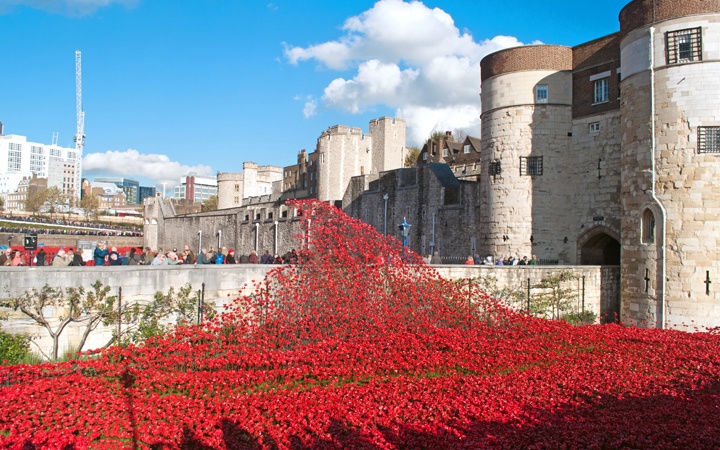 Remembrance poppies at the Tower of London

I couldn’t go a whole year without a Paris trip! In an annual family Christmas tradition, we sang carols at the Albert Hall before catching the Eurostar to Paris for a festive weekend. The weather was bleak so we sheltered among the Impressionists in the Musée d’Orsay and checked out the giant Christmas tree at Galeries Lafayette, with plenty of cheese and wine to keep us going. There were more Christmas festivities closer to home in Cardiff on the #xmascardiff blog trip. I indulged my Doctor Who geek side with a trip to the Doctor Who Experience in Cardiff Bay, as well as exploring the castle and the city’s Christmas events.

Looking across the Paris rooftops from the Musee d’Orsay

So that was my 2014 travel year – and my Take 12 Trips challenge completed! It’s been a great reminder that even if you’re not doing a ‘proper’ trip, you can get your travel fix, whether that’s with a local night away or day trip, or even just incorporating a bit of sightseeing into a trip for work or to see friends. And although the challenge is over that’s something I’ll try to keep doing on in 2015 and beyond.

My 2014 travels saw me visit nine countries (Morocco, Norway, Italy, Croatia, Greece, Turkey, France, Switzerland and Austria), two of which were new to me, as well as discovering new parts of the UK. And there’s lots more to come next year – details of my travel plans for 2015 coming soon, but until then thanks so much for reading and wishing you all a very happy Christmas!

Which were your favourite destinations of 2014?

Wow what an amazing you had! Many more amazing one to come. I want to take this challege too

Thanks, it was a great year! Good luck with your Take 12 Trips challenge for 2015 too!

This is great! I'm going to join the challenge for 2015. However, my favorite trip for 2014 was Malaysian Borneo.

Fantastic, welcome on board to Take 12 Trips. Malaysian Borneo sound fantastic, hope you can manage to beat that this year!

I loved this “Travel Calendar”. All the places mentioned in these blogs are amazing. I enjoyed reading about each and every destination. June would be my favorite month because I would love to visit Caldera in Santorini. Thank you for sharing these locations with us.

Thanks so much, Santorini was one of my highlights of the year too, I would love to go back and spend some more time there!

Just discovered your blog and was happy to come across this post! I also made a goal of taking 12 trips in 2014 (or rather of flying at least once every month in 2014) so it was fun to find someone else with a similar goal. =)

Thanks, yes it's been a great challenge to do and I've really enjoyed discovering new places near home and far away! Looks like you had a great travel year too, here's to more of the same in 2015.

Congrats on completing the challenge Lucy :-) I'm seriously impressed with how much you managed to fit in while travelling part-time. I oohed and aahed over so many of your photos this year but I think Norway struck a chord - the scenery looked unbelievable. Can't wait to see what you get up to this year!

Thanks, it's funny I didn't think of it as being a particularly epic travel year as I never went anywhere long-haul but reading it all back actually it was a great one! Here's hoping for lots of travels for us both in 2015.